After landing in Kyiv, the capital of Ukraine, I immediately set out on my first Ukrainian food adventure! Join me as I try modern Ukrainian food, including bees, with a superstar chef before exploring the Old Town of Kyiv and its attractions on my first day in Ukraine!

Ukraine is an amazing country. Whether you’re looking to visit Chernobyl or indulge in hearty Slavic food, there’s something for everyone. I couldn’t wait to kick off my first day in the country! 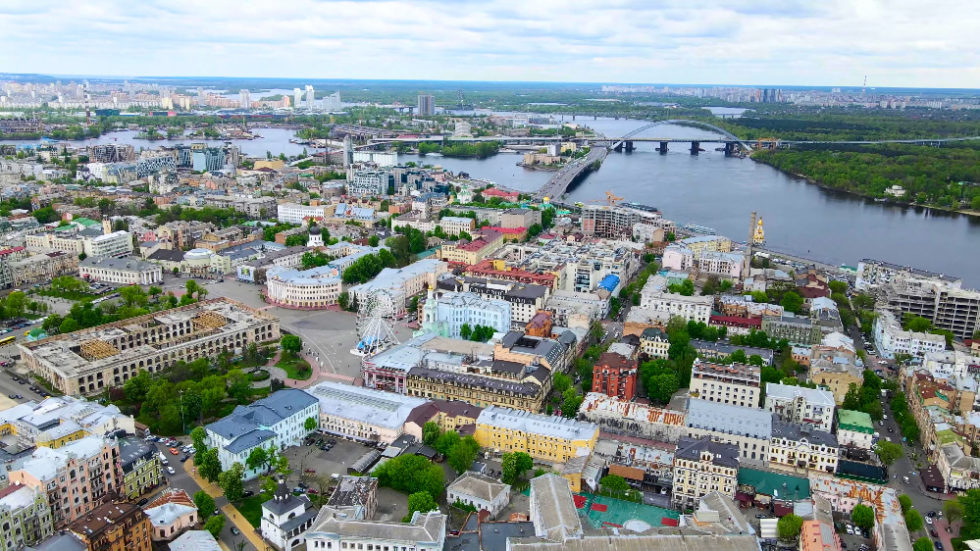 My adventure began on a cold and sunny morning in Kyiv with my guide Margarita from Tours by Locals, who would be showing me around the city. We began our tour at the Golden Gate of Kyiv, a medieval city gate from the 11th century! 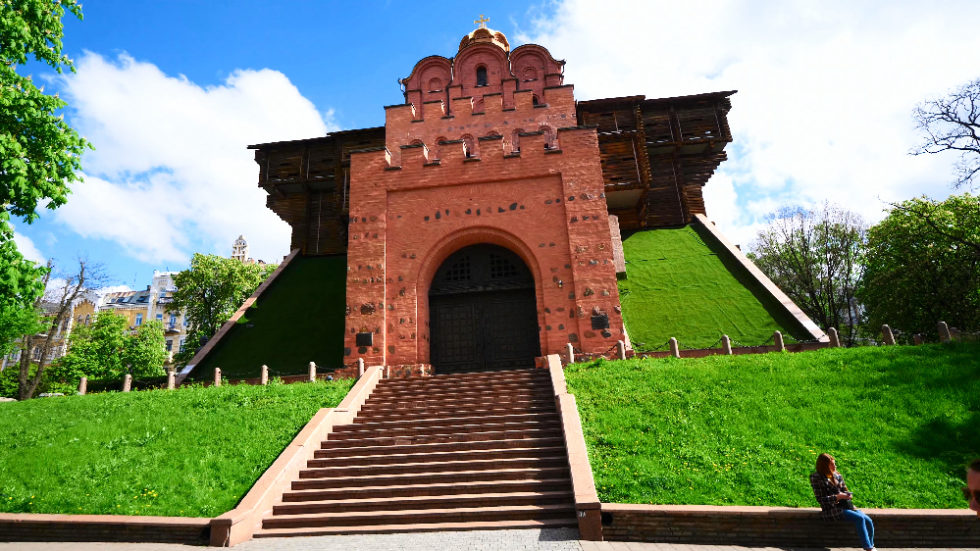 This gate was the main entrance to Kyiv. It’s where lots of tourists are welcomed to the city. We also then went down to visit Zoloti Vorota Station, a beautiful subway station. Ex-Soviet countries have lots of incredible metro stations. This one is 102 meters below ground and dates back to 1989! 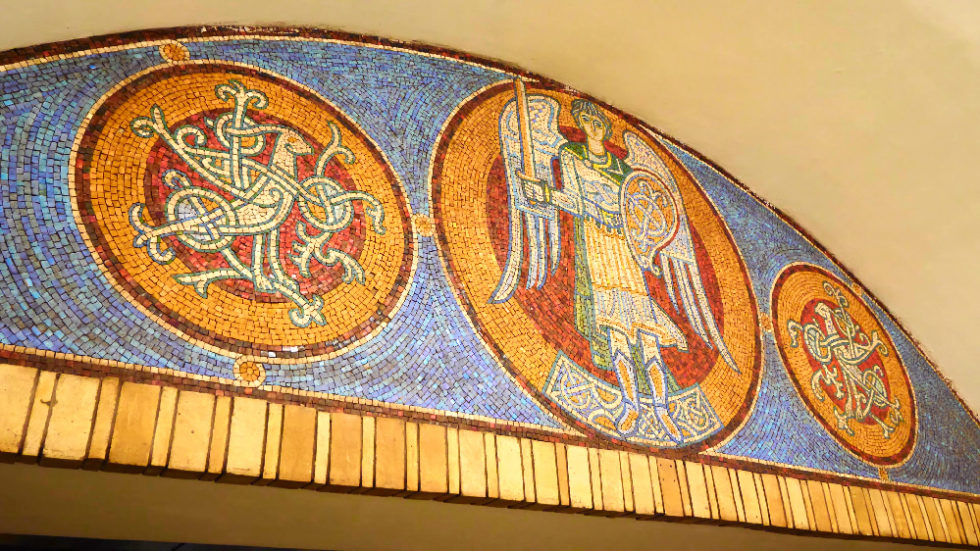 There are several escalators going down, deeper into the station. There are lots of gorgeous mosaics and pillars, and even pretty chandeliers hanging from the ceilings. Each mosaic is different! 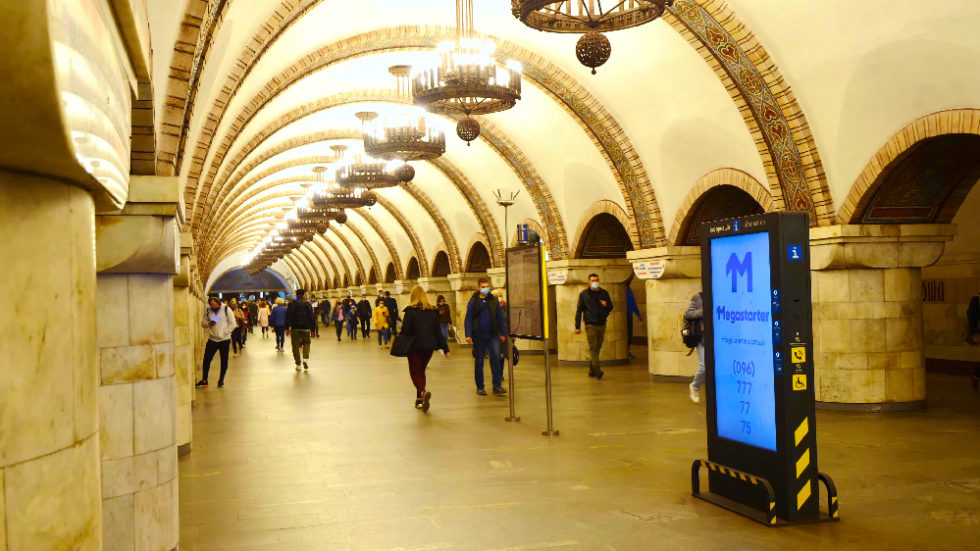 We then went back outside and saw a statue of Yaroslav I the Wise, who was one of the Grand Princes of Kiev. He built the city gate and fortified the city, which was surrounded by walls with high ramparts.

Check out my VIDEO: Top Things to Do in Gdansk, Poland: Touring the Central Market

Then, we drove through the historical center of Kyiv, which reminded me of old towns I’d seen in Poland and Hungary. There were lots of colorful mid-rise buildings! 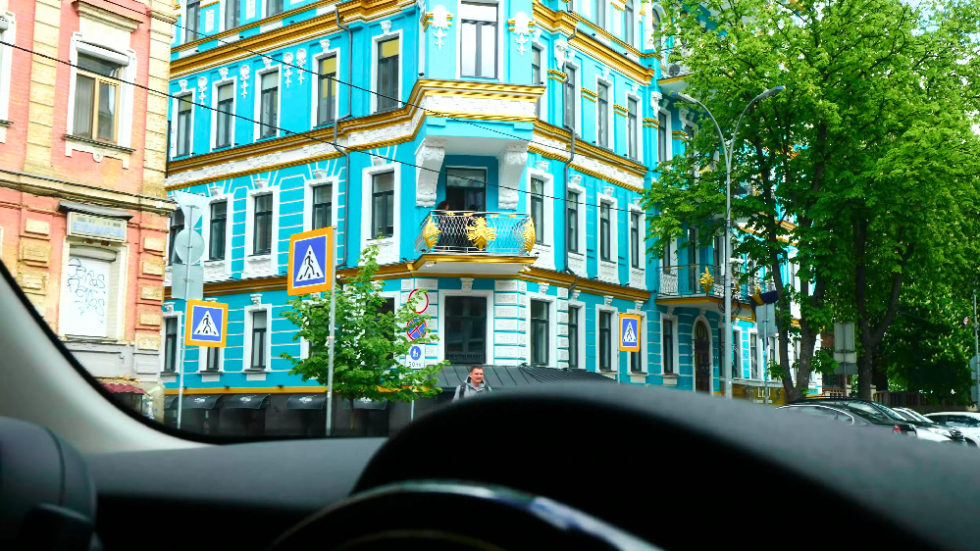 We arrived at Sto Rokiv Tomu Vpered Timeless Ukrainian Cuisine to have some modern Ukrainian food while exploring Kyiv, Ukraine. There, I met the head chef, Ievgen, who is an absolute character and is insanely funny. Margarita and I started with a nice coffee before heading up to their dining room. Ievgen brought out at least 9 dishes for us to try together. 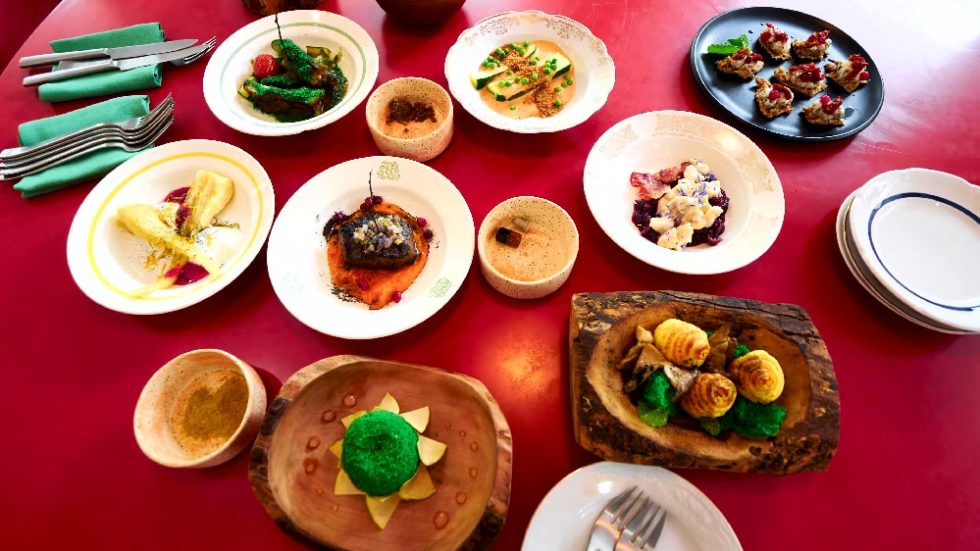 Each dish is super creative and looks so beautiful! The first dish was made of fermented barley with pig fat and cranberry on top. I’d never had anything like it! It was sour, creamy, and sweet! 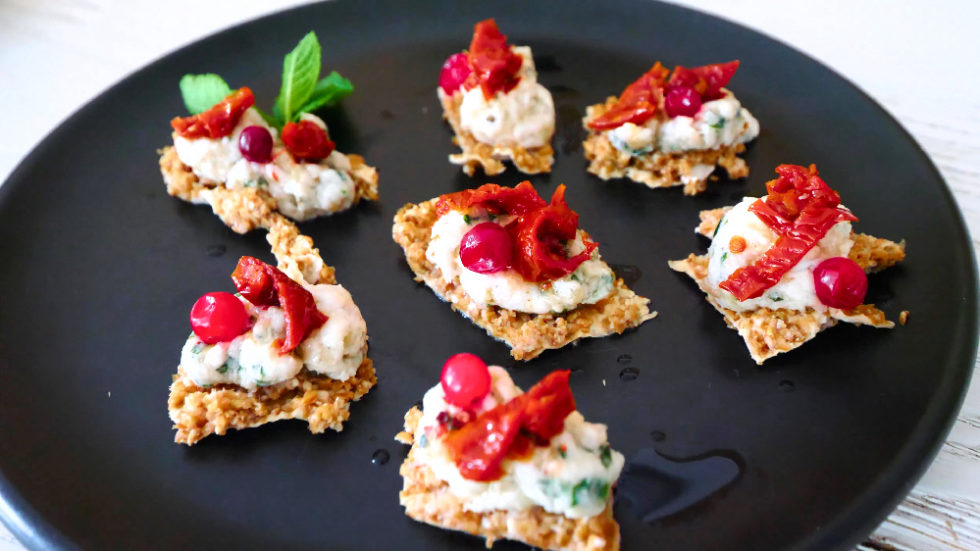 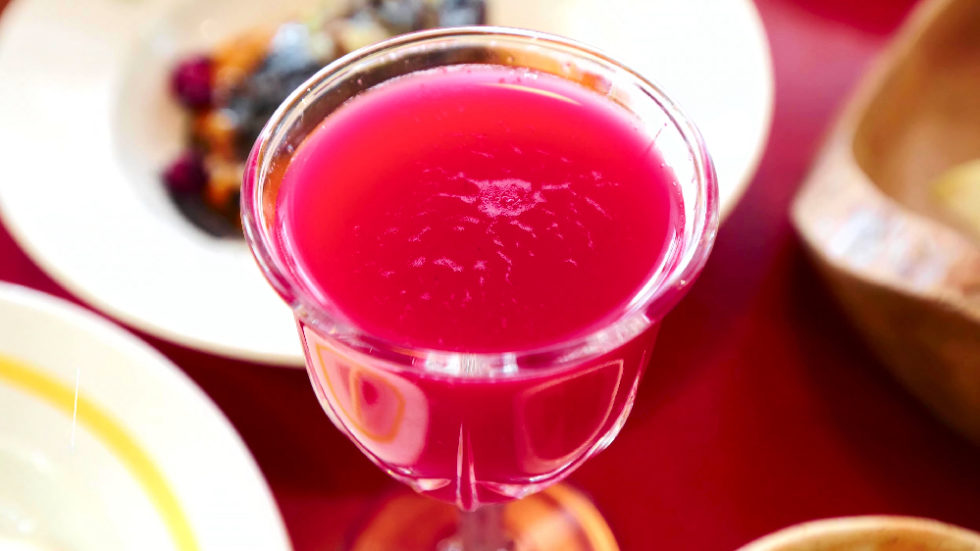 I followed that with a roasted parsnip with smetana, a dairy product made by souring heavy cream. The dish was sweet, and he added some spices as well. 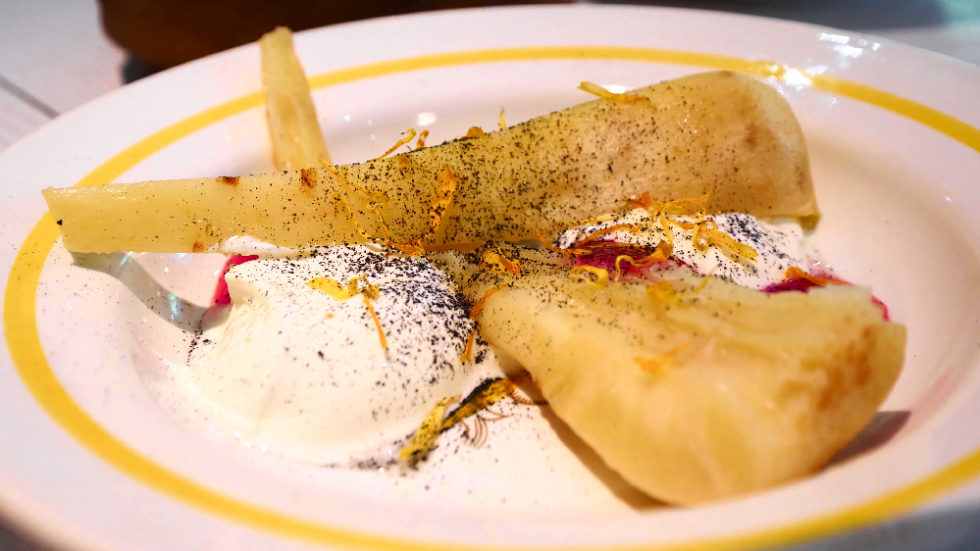 Our next dish was an exotic one that included edible bees. They were crunchy and had a little honey on them. Then, I dug into some banush, which is basically Ukraine’s version of polenta. It contained mushrooms and magnolia and mountain cheese. 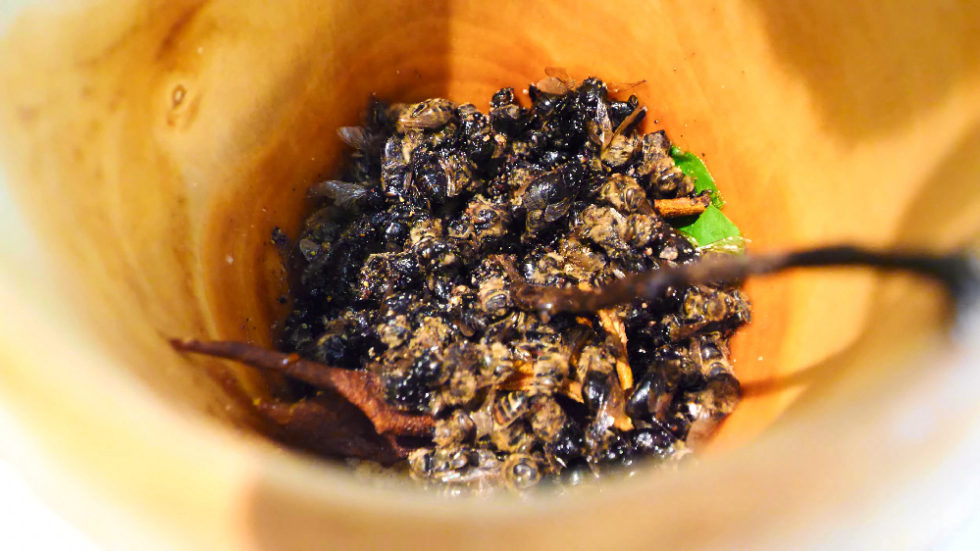 Check out my VIDEO: Where to Eat in Gdansk, Poland: Huge Portions at Kos Restaurant

Our next dish was vereshaka, which is pork ribs with wild oregano and a bread-thickened kvass sauce. The juicy, tender meat and the sauce were outstanding! 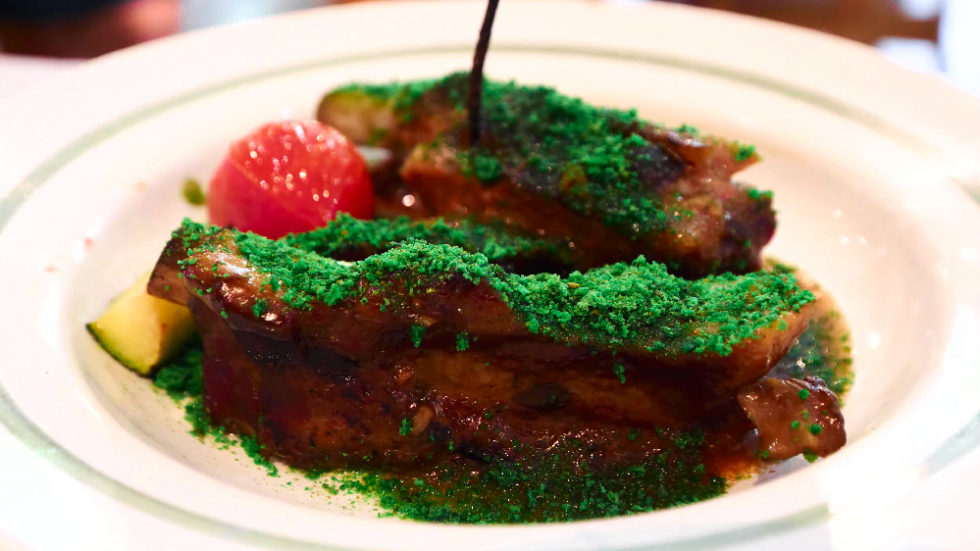 I followed that with galushki, a type of Ukrainian dumpling with kefir, cherries, and sweet bacon. The creamy texture was heaven on my palate. The dish was similar to gnocchi or ravioli and had an amazing, sweet flavor. It was my favorite so far! 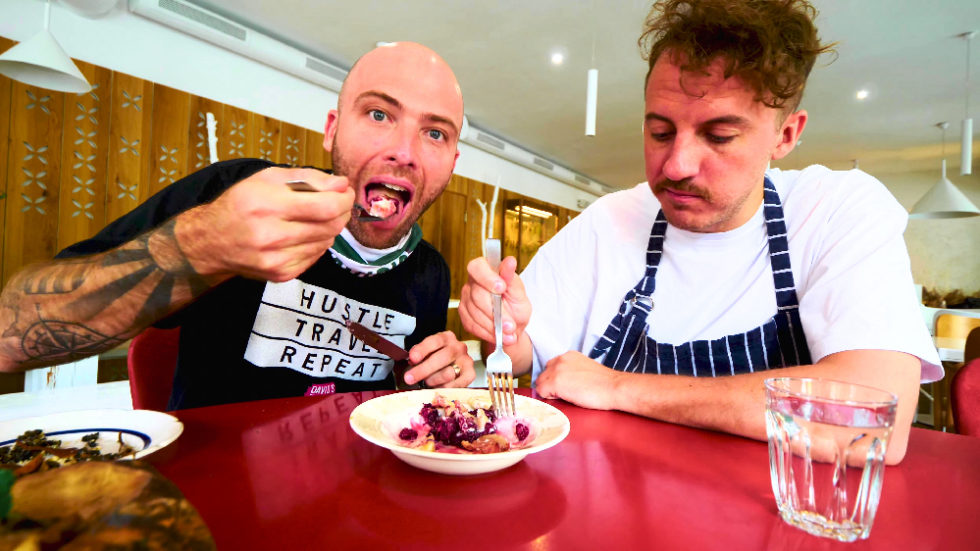 Next, we had baked gnocchi with green bread, wild mushrooms, and sauce. The bread and gnocchi were nice and fluffy, and the earthy mushroom and sauce tied it all together. 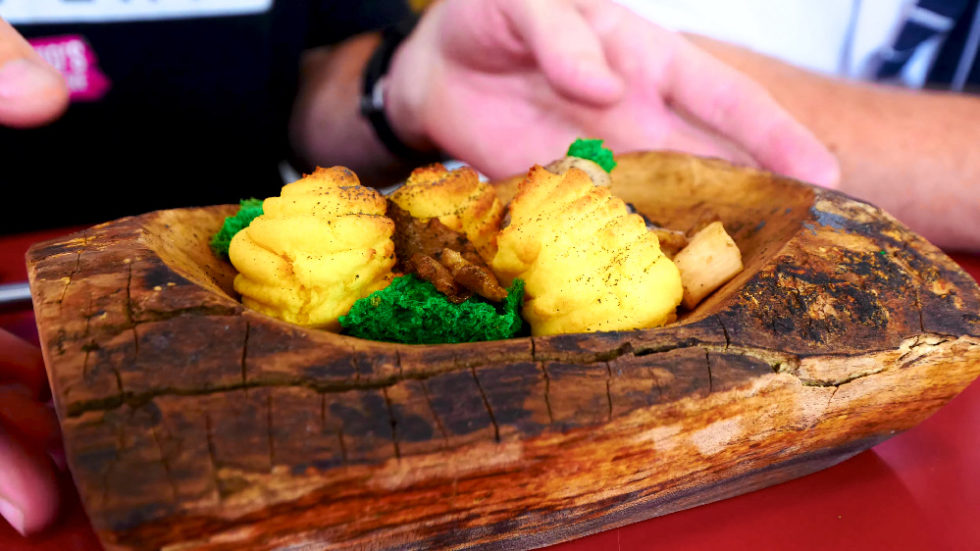 After that, we had some delicious zucchini with shrimp sauce, peas, and rye bread. The crumbly bread and smooth, creamy sauce were excellent! It’s almost like a bisque! 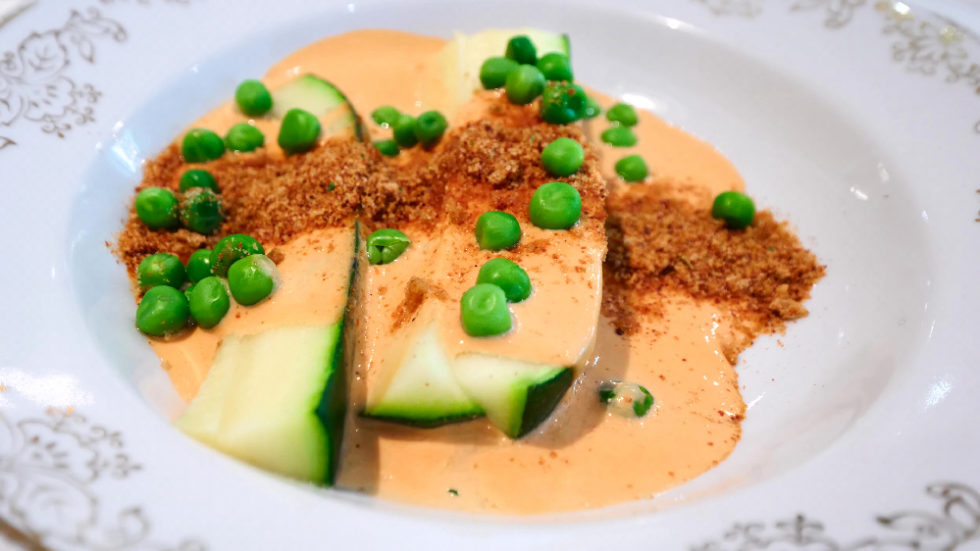 Then, I tried his borshch, which contains beets, beef, plum jam, and wood aroma, followed by some tiny sprouts with black currant. Then, I smelled and sipped some of their extra virgin sunflower oil! 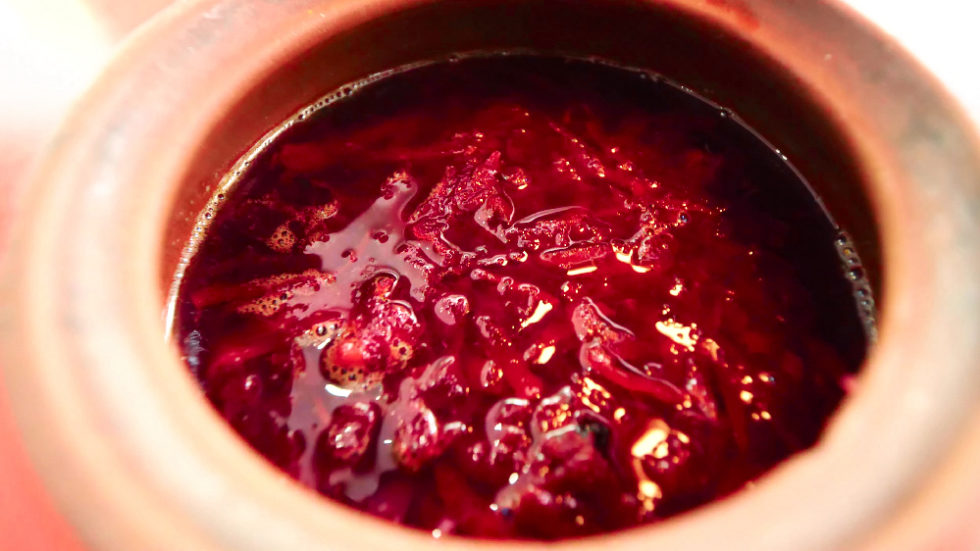 Next, Ievgen served me some hamula, which is a baked apple cake that also contained cheese and chocolate. He makes it look like a green apple. The fork he gave me to eat it with has a hole that he put a bit of lavender oil in! 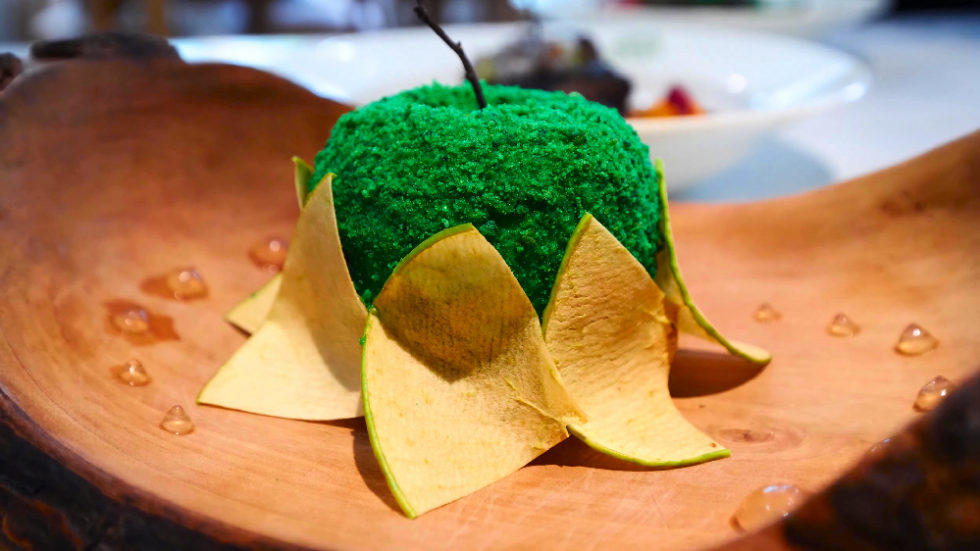 It was so good, and the scent of the lavender with it was an amazing combination. I’d never seen anything like it in my life! Then, I finished with some dehydrated tulip with spices. It was like a little brown nugget and was one of the spiciest things I’ve ever had in my life!

After our modern Ukrainian food experience in Kyiv, Ukraine, Margarita and I continued exploring the city. Along the streets are bricks that were laid out to mark the boundary of Old Kiev Hill. There’s also a display of old relics under some Plexiglas! 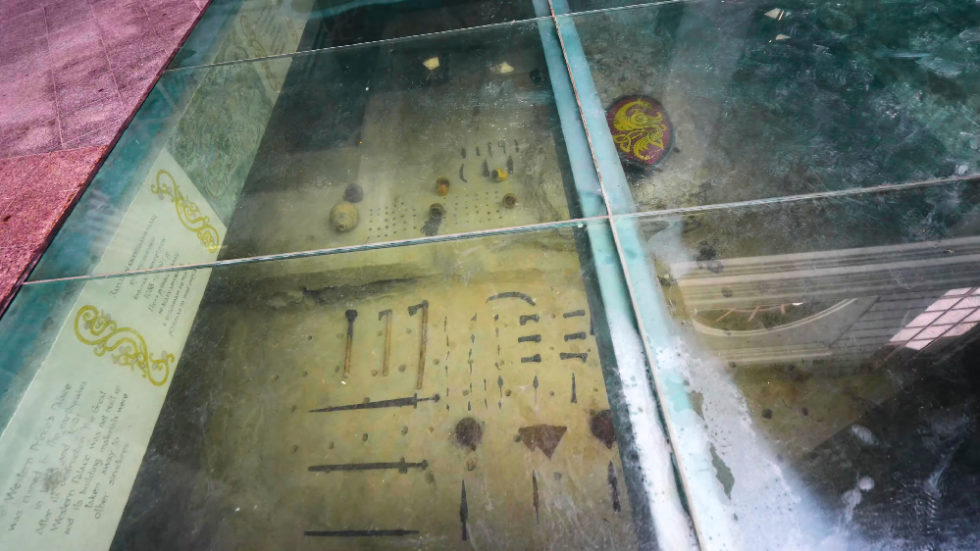 Kyiv is known as the City of Seven Hills, so there are lots of great panoramic views. We reached the top of Old Kiev Hill, where we got epic views over the city, the Dnieper River, and the ruins of the first church in Kyiv. 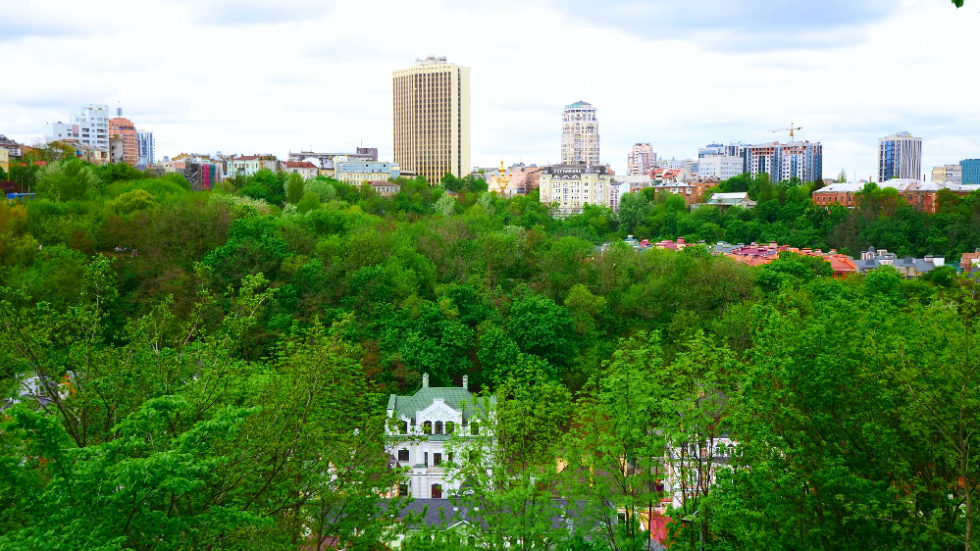 The church dates back to the 10th century and was destroyed in the 15th century.  Then, we visited St. Andrew’s Church, which is named after one of the Apostles. It’s a very colorful Christian Orthodox church! 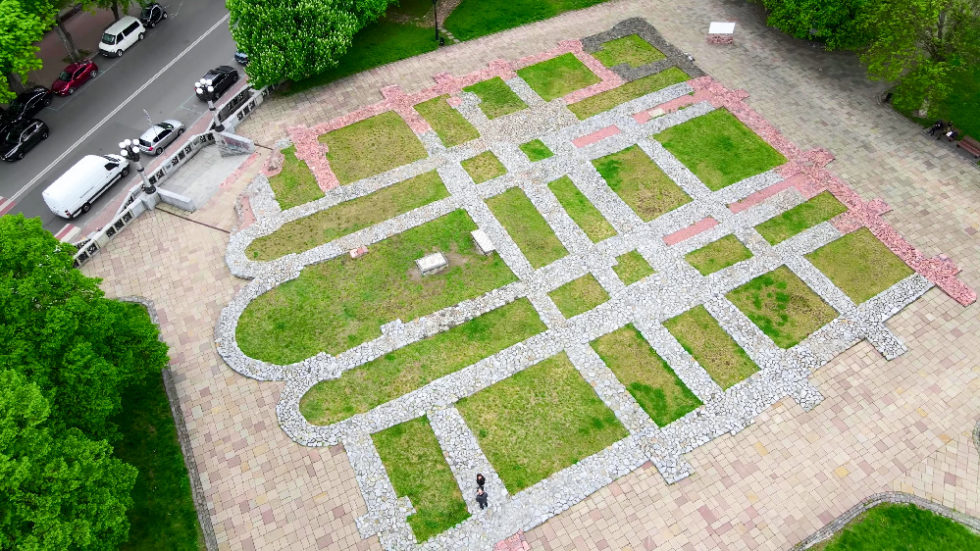 In front of the church is a monument statue of a man who promised to marry two women but wound up with neither. There’s a beetle on the statue that is said to protect women from these kinds of men if they rub it!

Check out my VIDEO: Cricova Winery and Cellar in Moldova 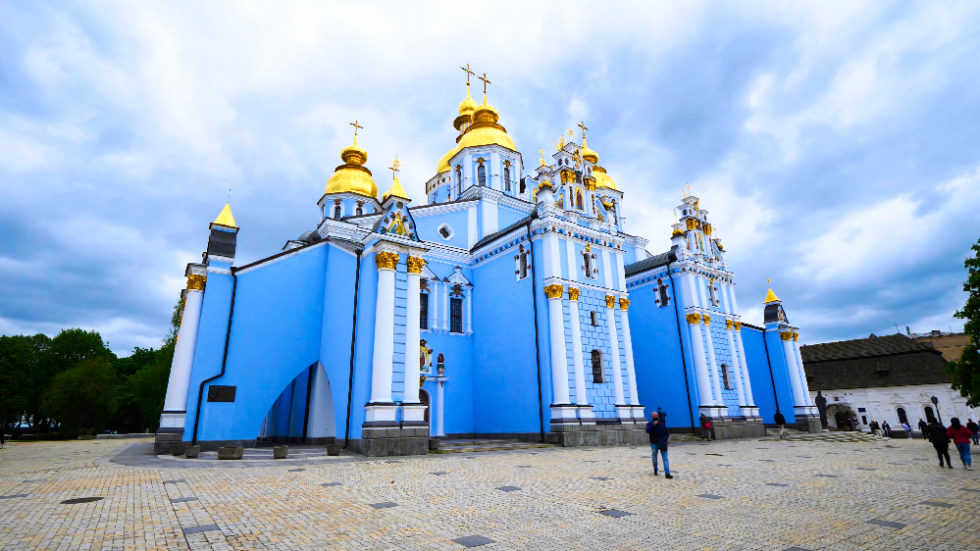 Outside is a mural of St. Michael, angels, and kings. The cathedral is gorgeous. The blue color represents heaven. Inside are lots of gorgeous paintings. Orthodox churches are always smaller than Christian or Catholic ones, and there are no statues inside. 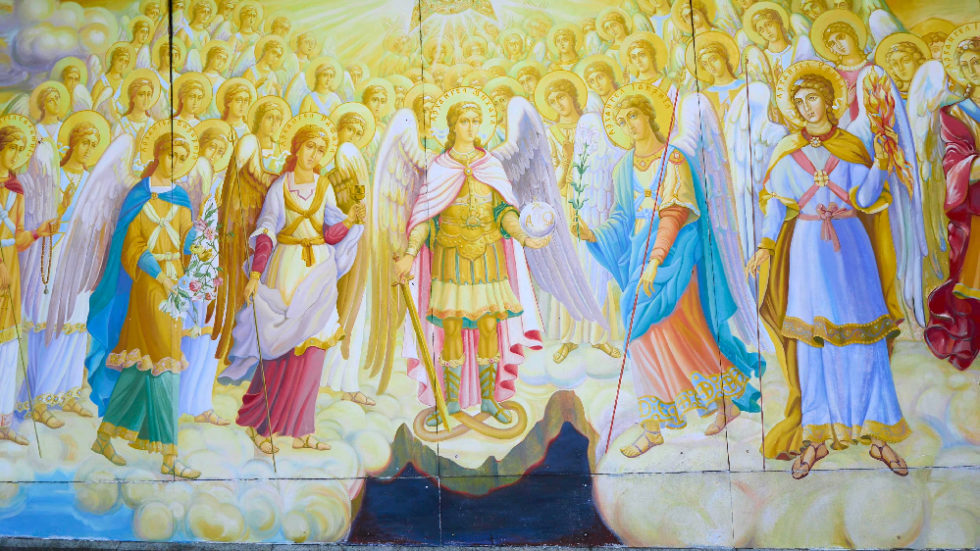 Then, we headed over to the Kyiv Funicular, one of the oldest funiculars in Europe. One car travels down the hill, while the other travels up. We took it down to the lower part of Kyiv to end our exotic Ukrainian food adventure in Kyiv, Ukraine! 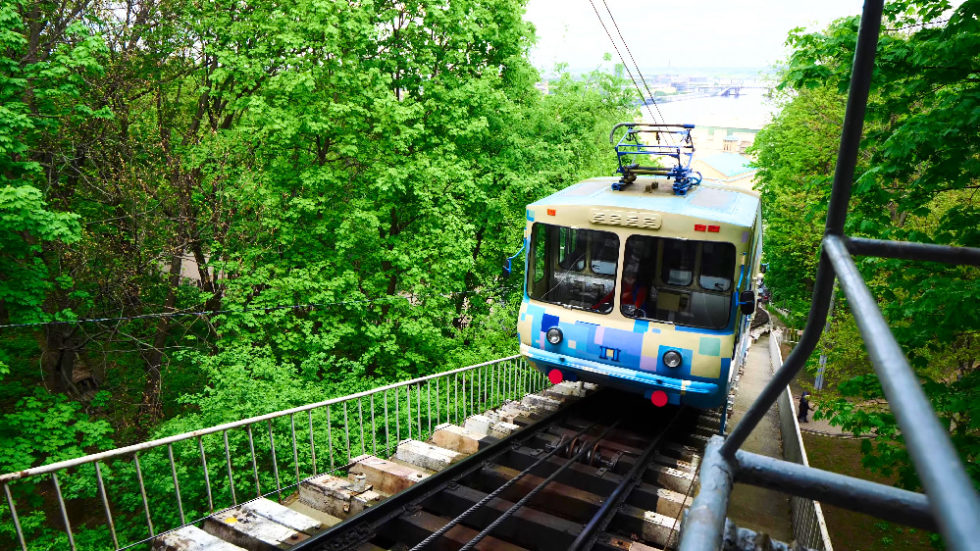 I hope you liked coming with me to explore the modern Ukrainian food scene and the Old Town in Kyiv, Ukraine! If you did, please give this video a thumbs up and leave a comment below. Also, please subscribe to my YouTube channel and click the notification bell so you don’t miss any of my travel/food adventures around the world!