After arriving in my 84th country, the Republic of Georgia, I set out bright and early the next morning to begin my exploration of its capital city, Tbilisi! Come with me as I go on the ultimate Georgian food and attractions tour of Tbilisi, Georgia!

My morning began with my guide, Sophie from Travel Tbilisi, who would be showing me around Tbilisi, Georgia’s capital, for the next couple of days. Today, we’d be focusing on the historical center! 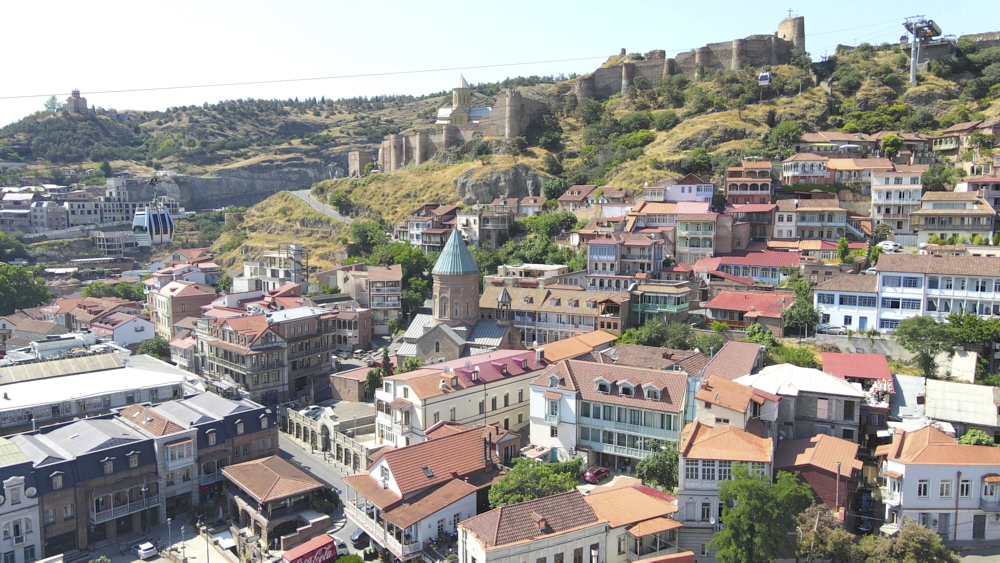 We started off at Freedom Square, which used to be Lenin Square during Soviet times. After the Soviet Union fell, the statue of Lenin was removed and replaced with a statue of St. George, the guardian of Georgia. 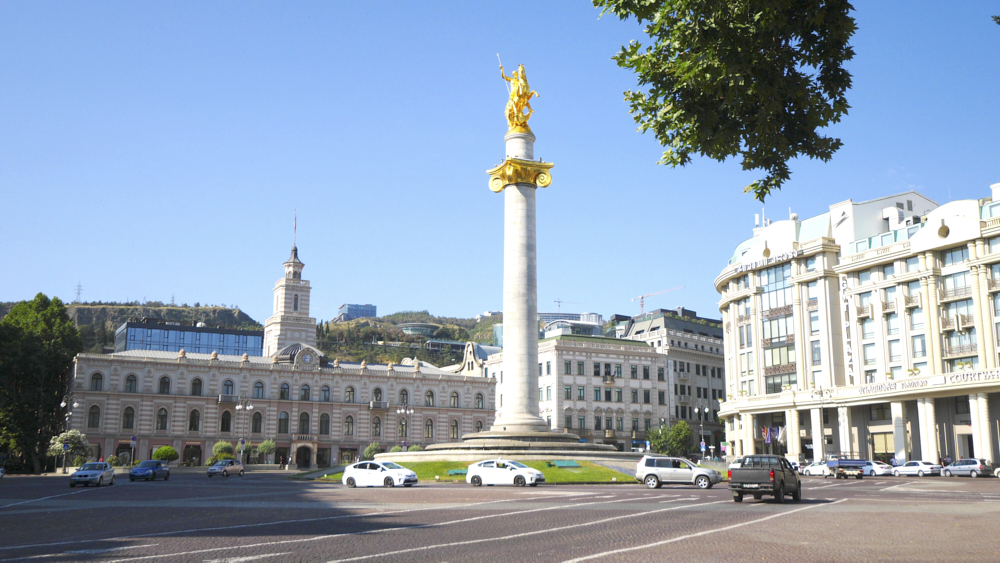 Then, we saw Tbilisi Sioni Cathedral, which actually dates back to the 6th and 7th centuries, but was destroyed by invaders. The current church was rebuilt in the 13th century. 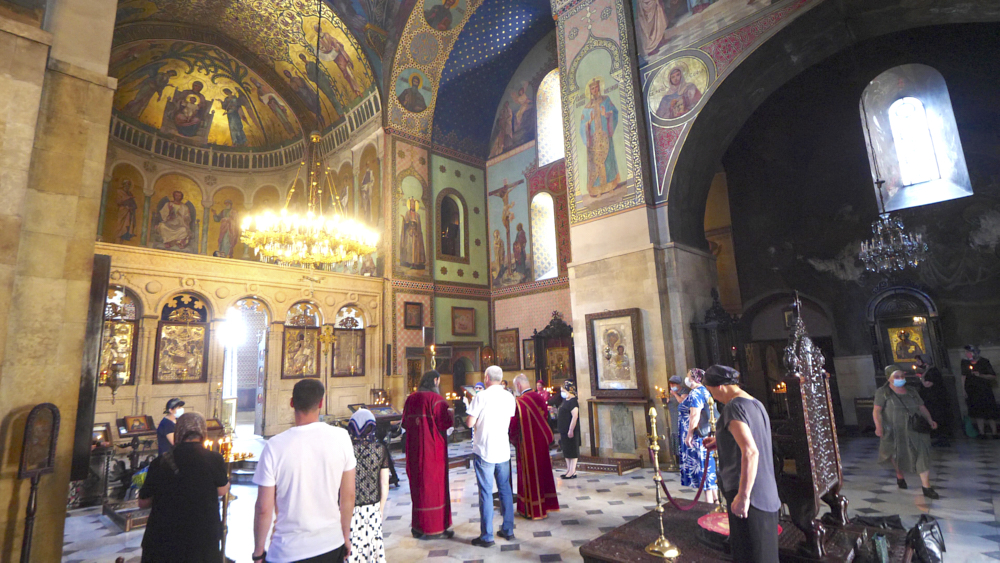 In the very back is the cross, which is made from grave vines. From there, we headed to the Tbileli Caravanserai. It was an 18th-century hotel used during the Silk Road times.

Next, we headed down a lane of restaurants with terraces and approached the 4th-century Narikala Fortress, which sits atop a hill. Instead, we saw the Kura River and the Peace Bridge across it before arriving at Metekhi Church, where there’s a statue of King Vakhtang. 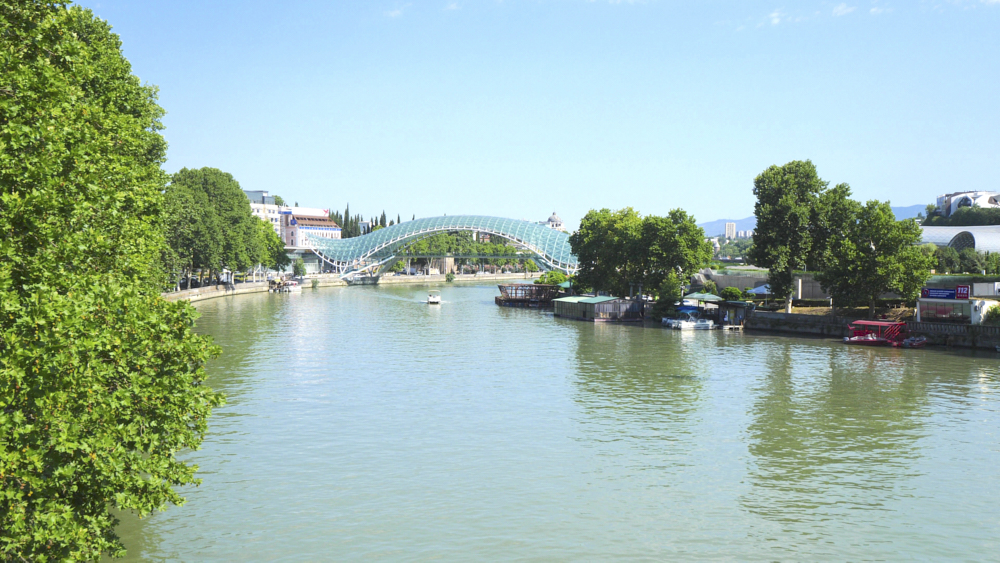 The 13th-century church has been destroyed and rebuilt, and during Soviet times, it became a theatre. You can see the stones and bricks from different eras on the exterior! 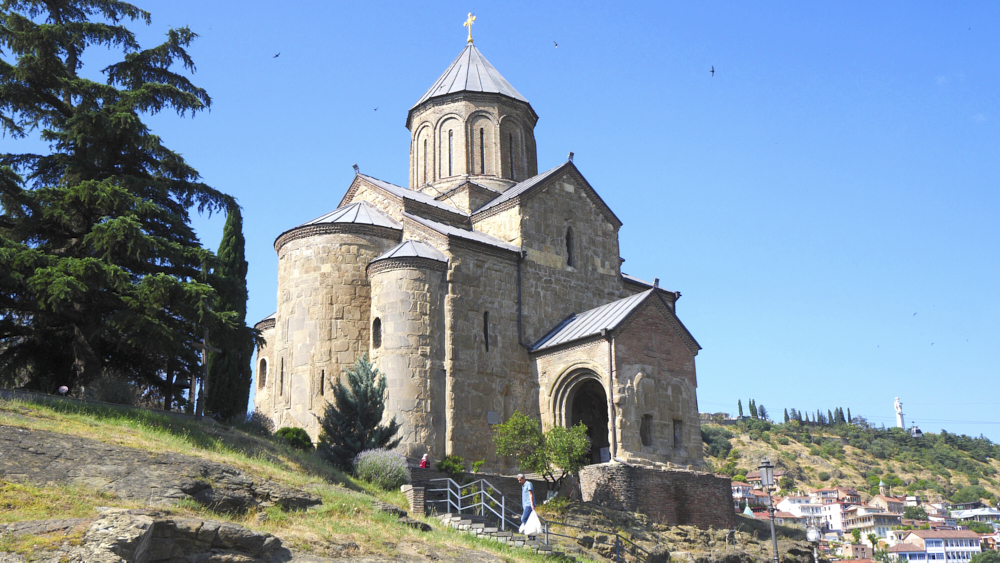 Next, we visited Leghvtakhevi Waterfall, a hidden gem near the Sulfur Baths of Tbilisi. There’s a statue of the falcon there, 17th-century bathhouses, and other 19th-century buildings. 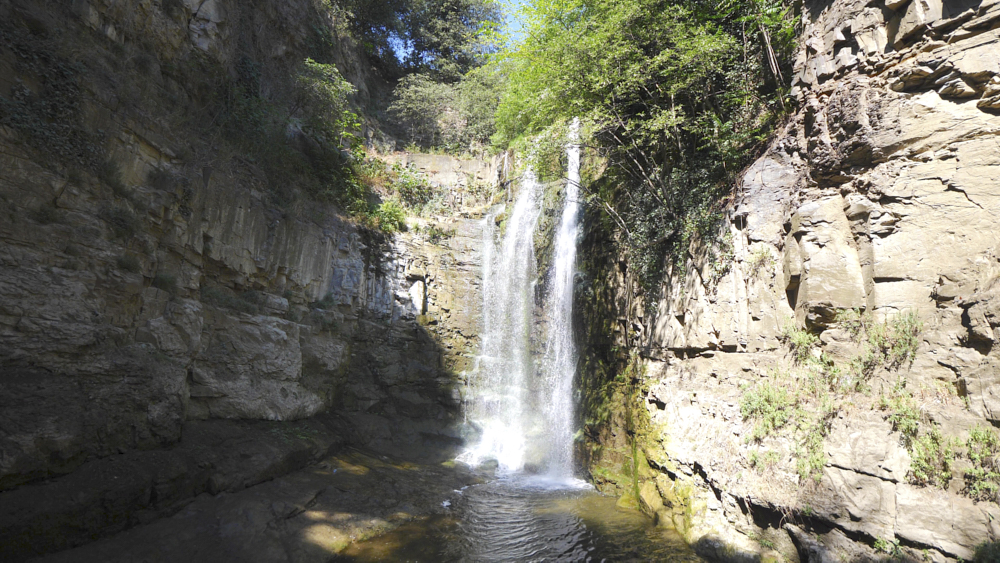 At the end of the boardwalk along the springs is Leghvtakhevi Waterfall. The buildings you pass on the way cling to the edges of cliffs and exhibit typical Tbilisi architecture.

Next, we drove two minutes to Rigi, a rustic but modern restaurant serving traditional Georgian cuisine. They were baking bread in a tone oven, as well as dedas puri (a type of bread). 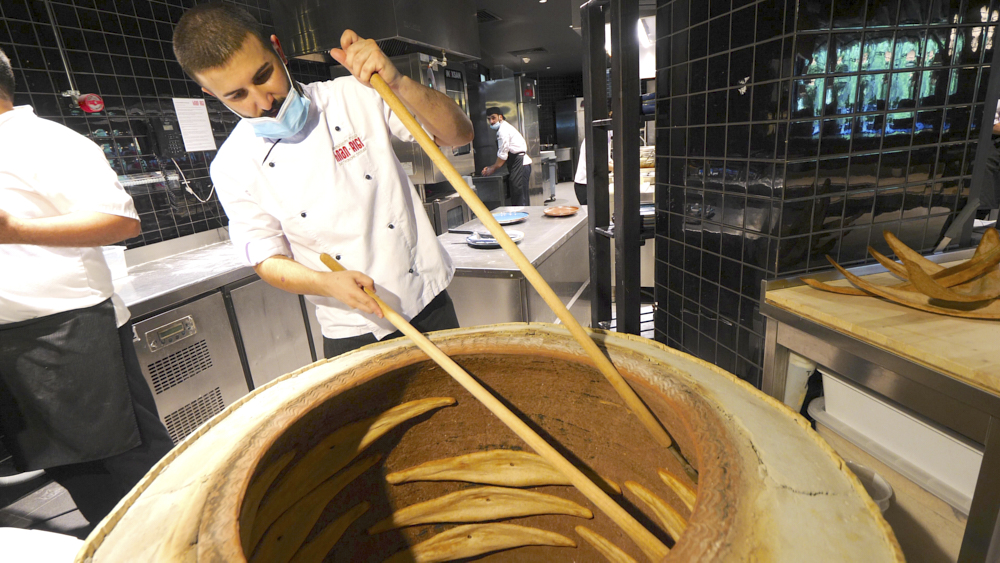 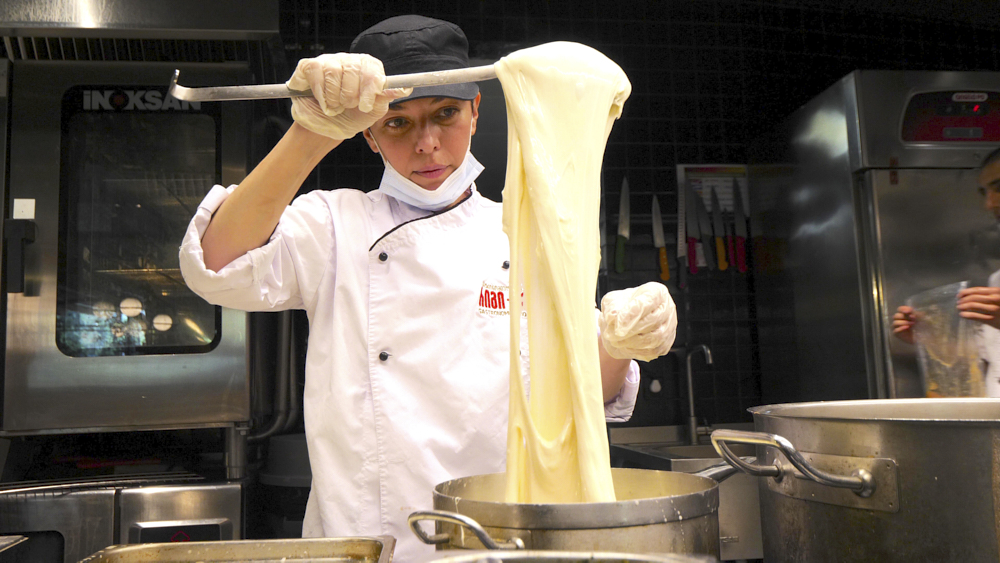 At our table, we started with three types of chacha, which is similar to grapa and raki. To eat the khinkali, you take a tiny bite and suck the soup out. Then, you eat the khinkali except for the little handle. 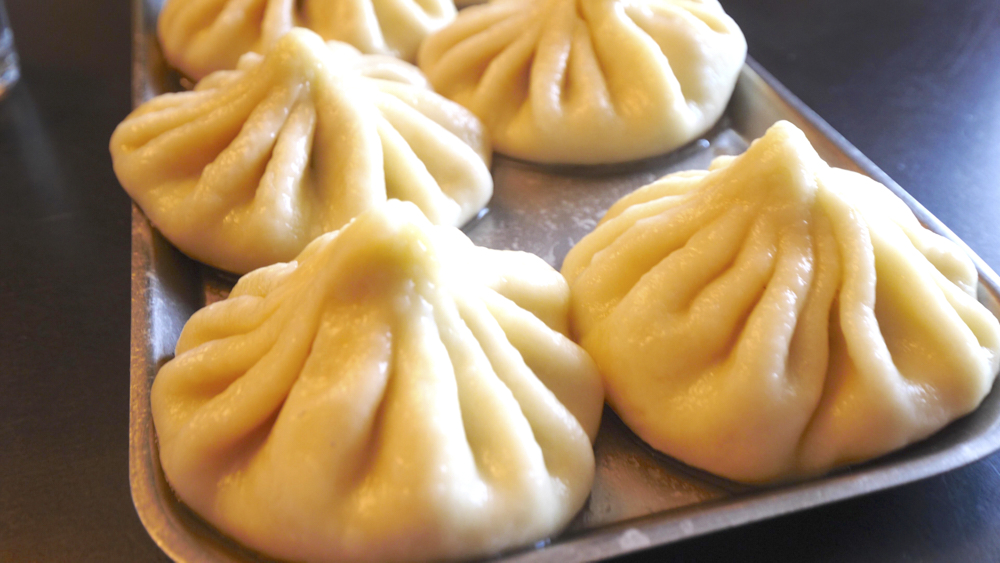 We also had mountain pork, dedas puri, sulguni cheese, eggplant, and Megreli khachapuri. The khinkali was thick and the meat inside was juicy and full of onion flavor.

Next,  I jumped on a craft beer and the khachapuri, which was incredible! It was almost like a pizza! The three cheeses were creamy and really filling. The chachas were strong! 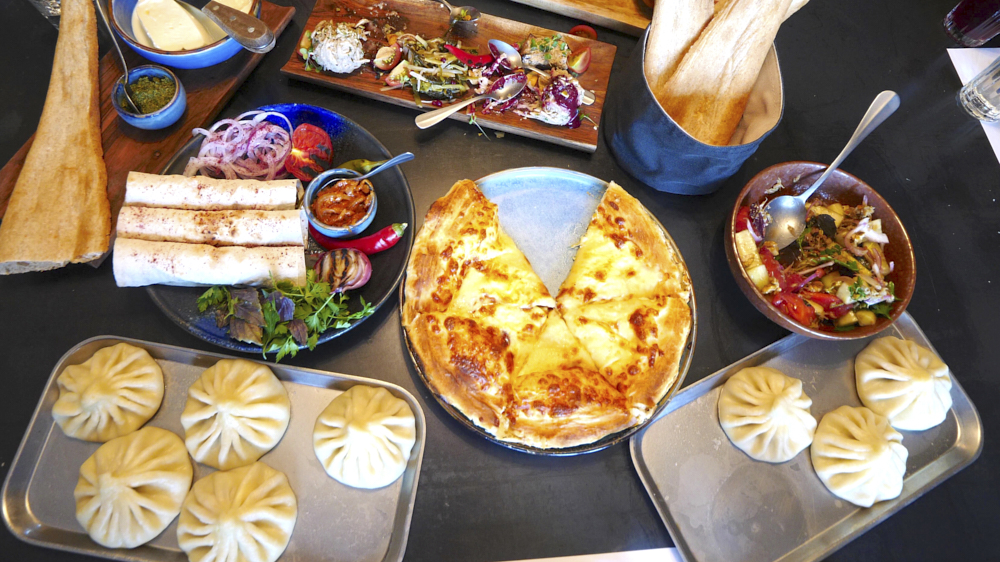 The pastes with eggplant; sulguni with puri; and walnut salad with cucumbers, tomatoes, parsley, mountain pork, and sunflower oil were amazing. The pork was similar to prosciutto, and the salad was very refreshing. 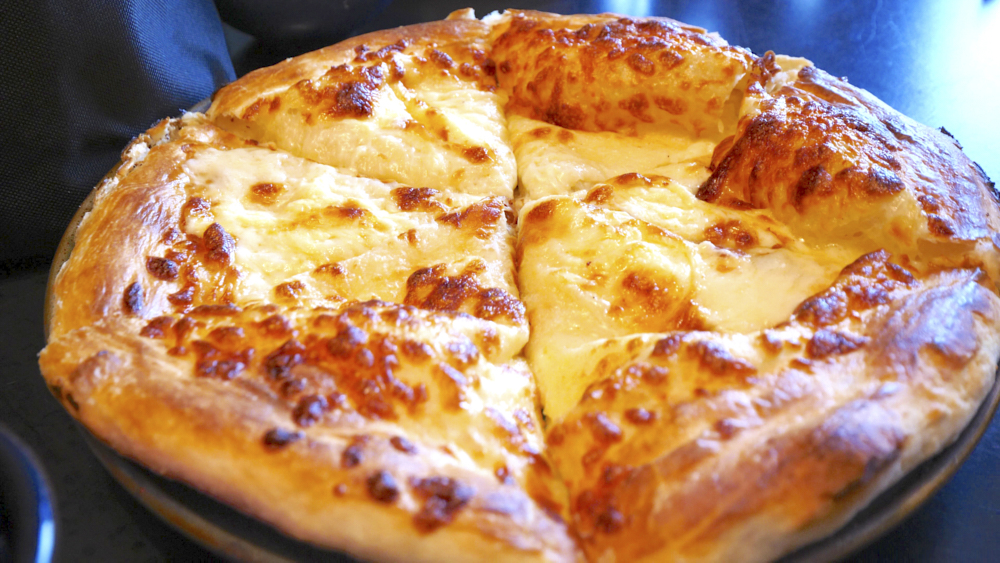 We also got some kebabs and shkmeruli (fried chicken in a garlic-milk-cottage cheese sauce). The shkmeruli was insane and reminded me of creamy chicken pasta dishes my Italian grandmother used to make. 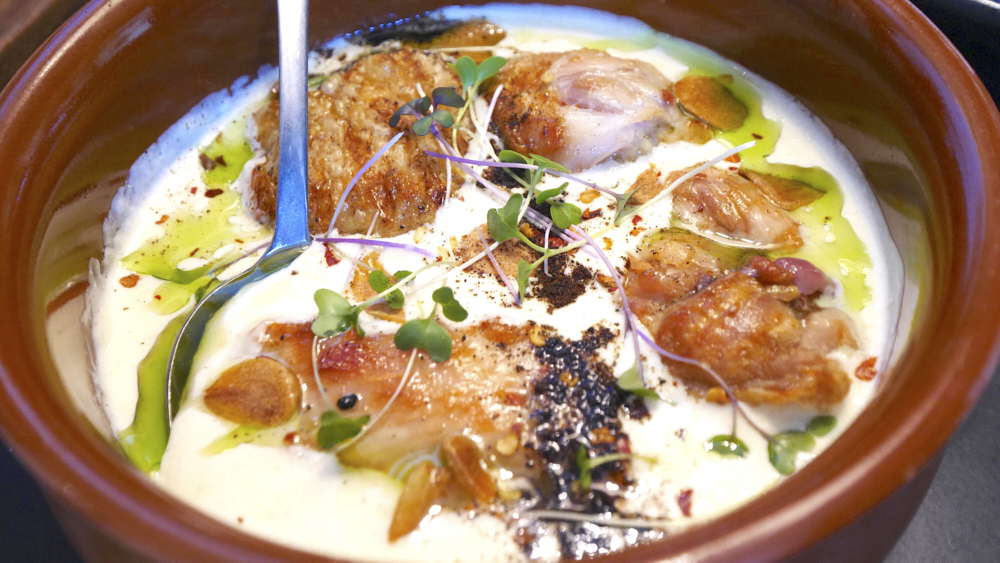 The kebab came wrapped in thin, lavash-like bread and was full of light but flavorful spices. The leeks with walnut were amazing, but the kind with the plum sauce was better. I also loved the eggplant with peppers and creamy paste.

The tone puri with hazelnut paste was also really great with some cheese. We finished our Georgian food and attractions tour of Tbilisi, Georgia with Pelamushi, a frozen grape juice dessert with sunflower, cherry tomato sorbet, and white chocolate. 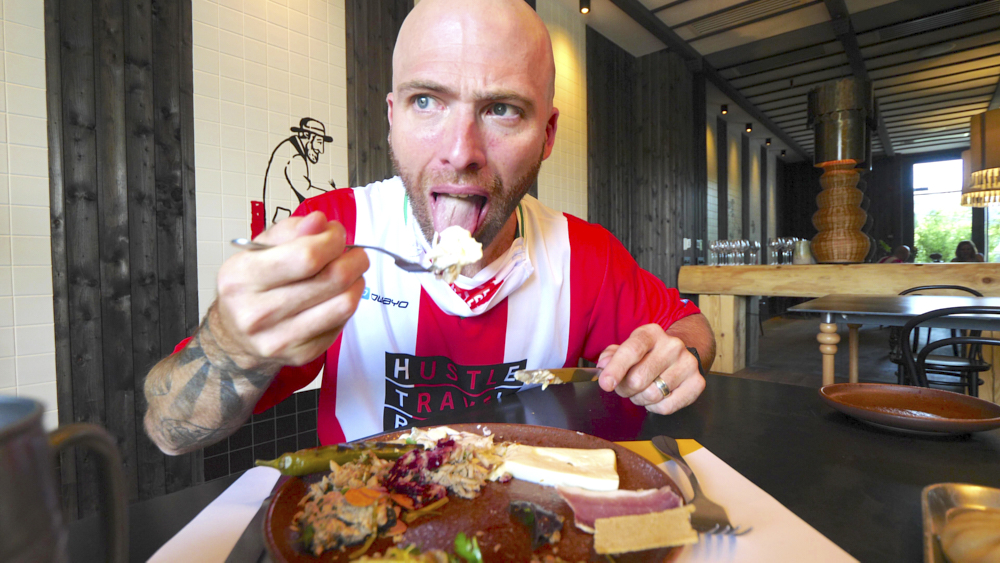 I hope you liked coming with me on the ultimate Georgian food and attractions tour of Tbilisi, Georgia! If you did, please give this video a thumbs up and leave a comment below. Also, please subscribe to my YouTube channel and click the notification bell so you don’t miss any of my travel/food adventures around the world!