After three days of touring the capital of Georgia, Tbilisi, I hit the road to start exploring the rest of the country! Join me as I embark on my Georgian food road trip in Kakheti and visit some beautiful ancient monasteries!

For the next seven days, I’d be traveling the country with my boy Tim from Friendly GE, an amazing tour company that’s all about showing people what Georgia is all about. My adventure started in Udabno in the desert-like Kakheti region in the southeastern part of the country, on the border with Azerbaijan. We were there to explore some of the ancient monasteries of the region! 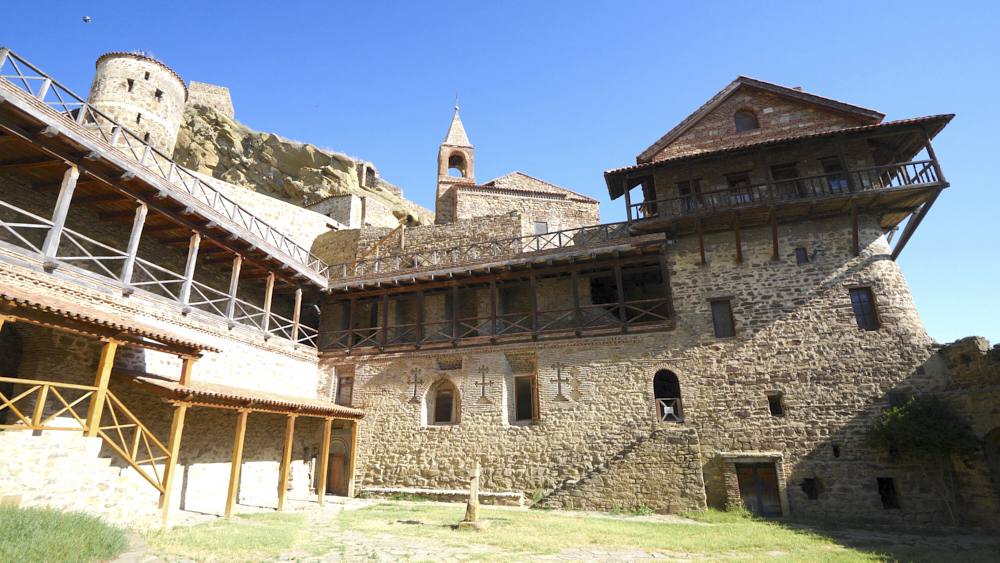 Our first stop was David Gareja Monastery Complex, which is a rock-hewn Georgian Orthodox cave monastery on the slopes of Mount Gareja. The complex dates back to the 6th century and is made up of hundreds of churches, chapels, cells, refectories, and living quarters carved into the mountain. 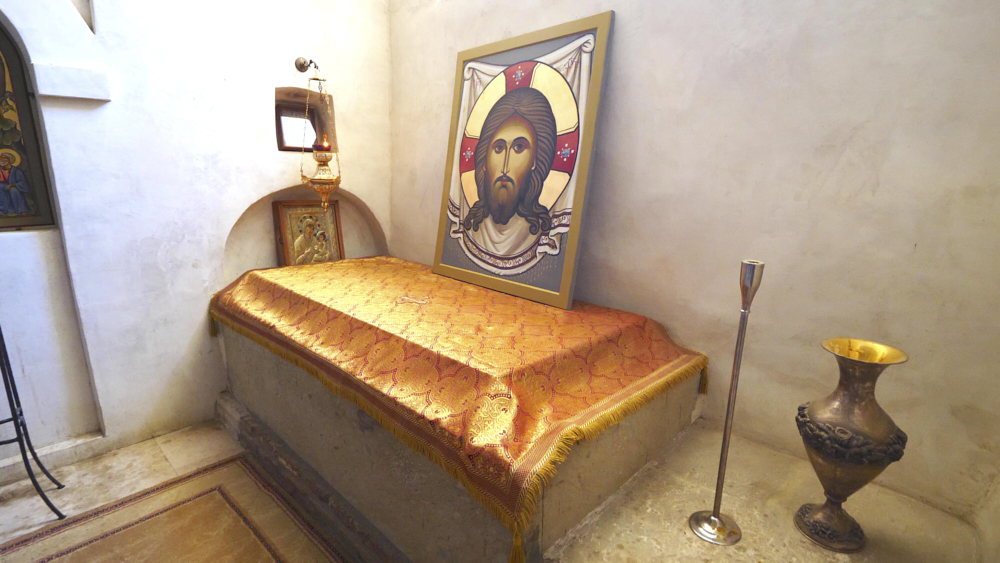 David Gareja Monastery was founded by St. David Garejeli, who was one of 13 Assyrian monks who arrived in Georgia at that time. The monastery was an important religious and cultural center for centuries, despite the harsh semi-desert environment. It’s known for its highly artistic frescoes.

Check out the Top Things to Do in Tbilisi, Georgia

David Gareja is located about 90 minutes outside of Tbilisi. The road is paved, so it’s easy to get there. Inside the gate, we had to be quiet, but we saw the original cave St. David Garejeli lived in. There are caves and then brick-and-stone buildings and walls as well. 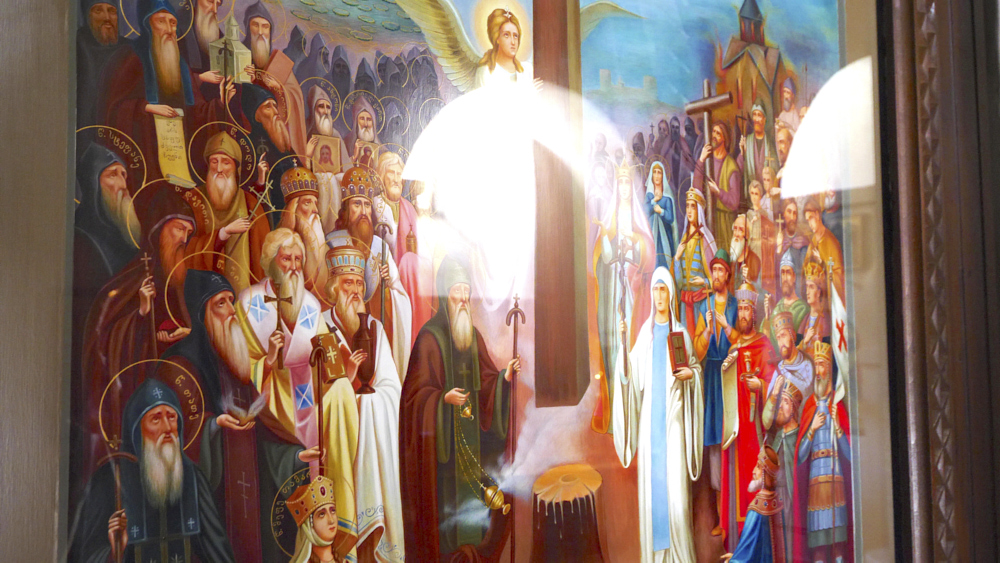 Inside the rock-carved cave, they had icons on the walls depicting the saints who lived there, the grave of St. David Garejeli, and the grave of another saint. They both had two candles suspended above them. There’s another rock-cut church in the area, but it’s not open to the public. 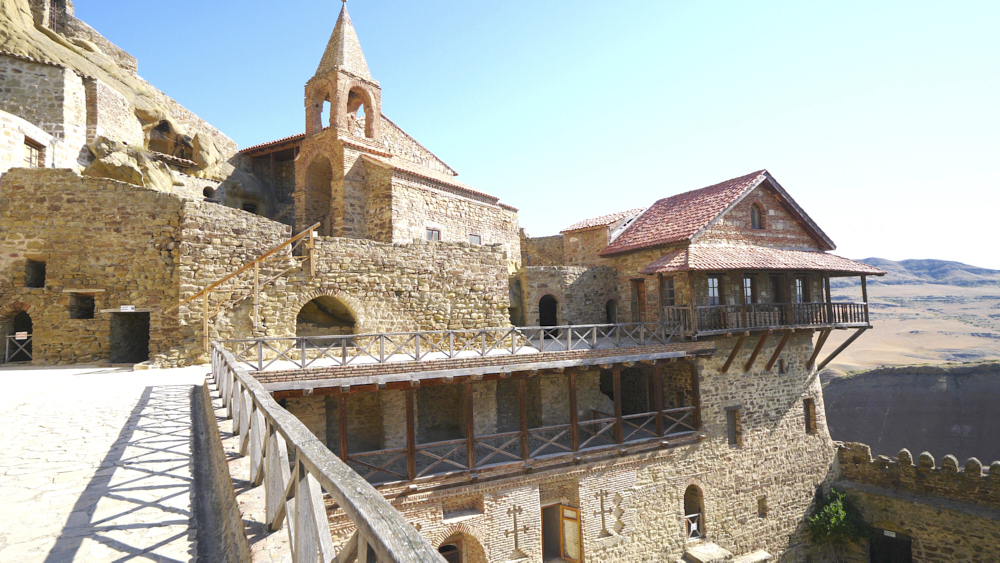 There are so many layers of history inside the complex! We saw old, closed-off tunnels and residences and headed up to the top, where we got beautiful views of the courtyard, the caves, and the tower. Tim once stayed at the monastery for a week! 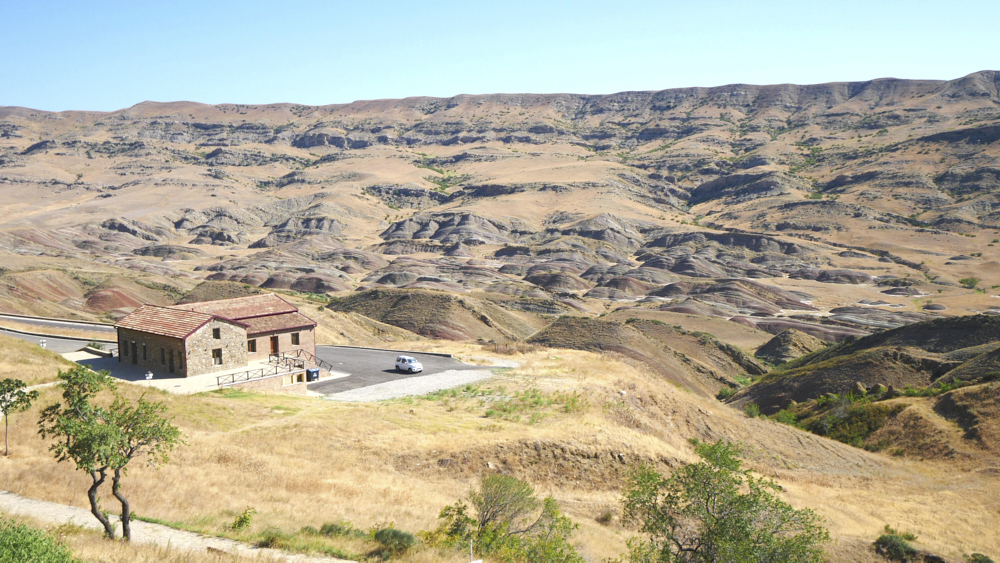 When you exit the monastery, you can see the Bacon Mountains. The archway has an ancient Georgian script carved into it. There’s also an ancient water channel that aided in collecting water. 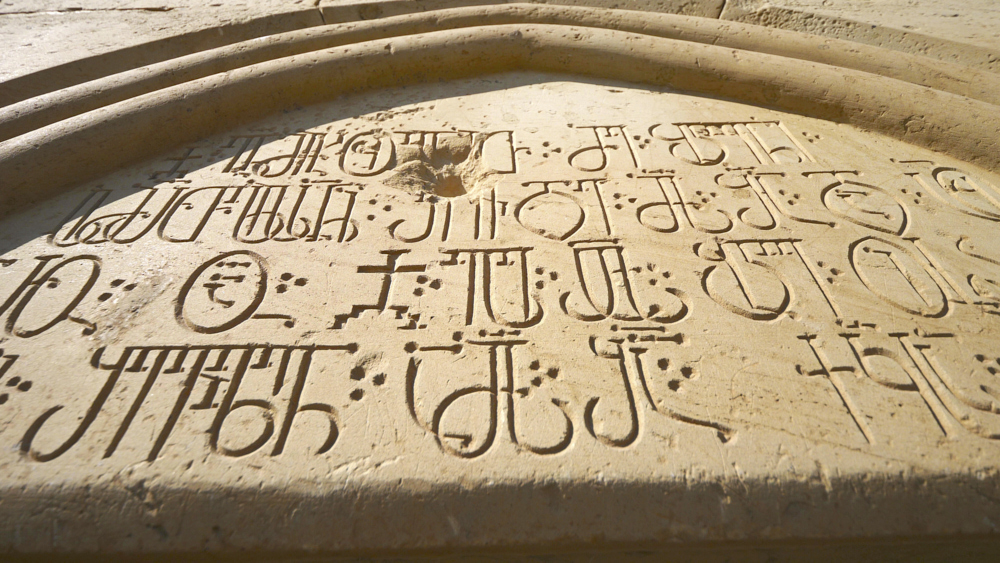 Next, we drove through the semi-desert area, which is quiet and empty, and has mostly farmers and ranchers. We arrived at the 7th-century Natlismtsemeli Monastery, also known as St. John Monastery, which is made up of several cave temples and a central church.

Only about 3 monks live there full-time, and you have to hike to get to it. Inside one of the cave churches are the remnants of frescoes. The whole place used to be covered in frescoes of saints and scenes from the Bible, but they have since faded since the 14th century. 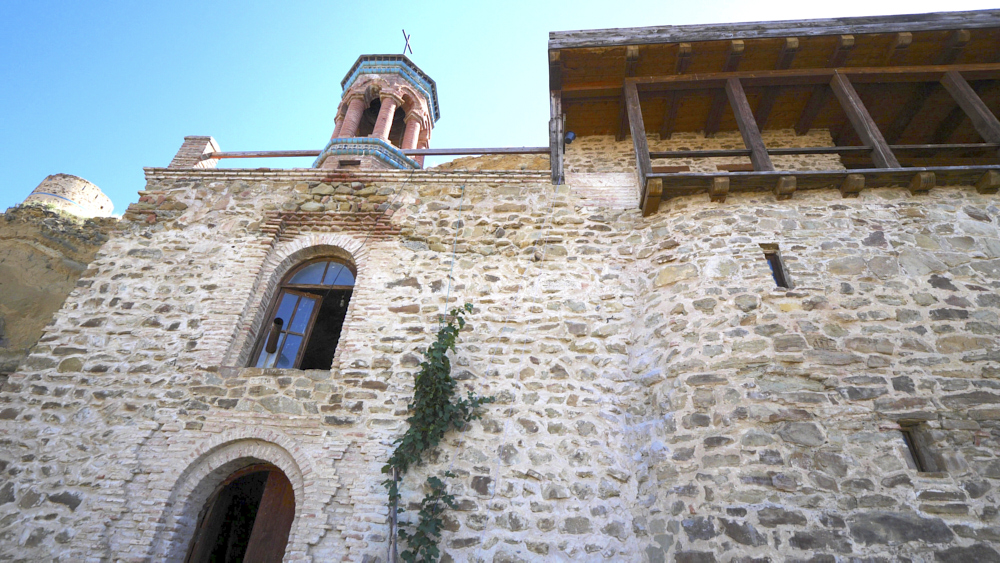 In another, better-lit cave, you can see lots of missing plaster. Then, we headed back outside and up a thin, winding trail up rocks and boulders. Be careful! To get to the top of the tower, you crawl into a cave and then head up a stone staircase. 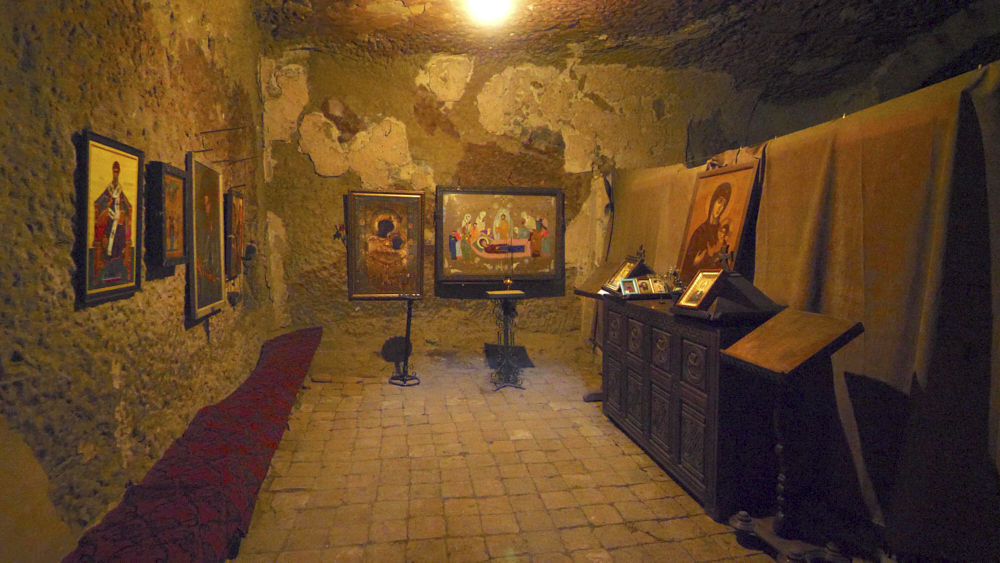 The tower has the best views over the area! You can see the nearby mountains and valleys and Tbilisi in the distance! Then, we climbed back down and drove back to Udabno, which translates to “desert” in Georgian. The village was built during the Soviet era by families that settled the area after an ecological disaster in Svaneti. 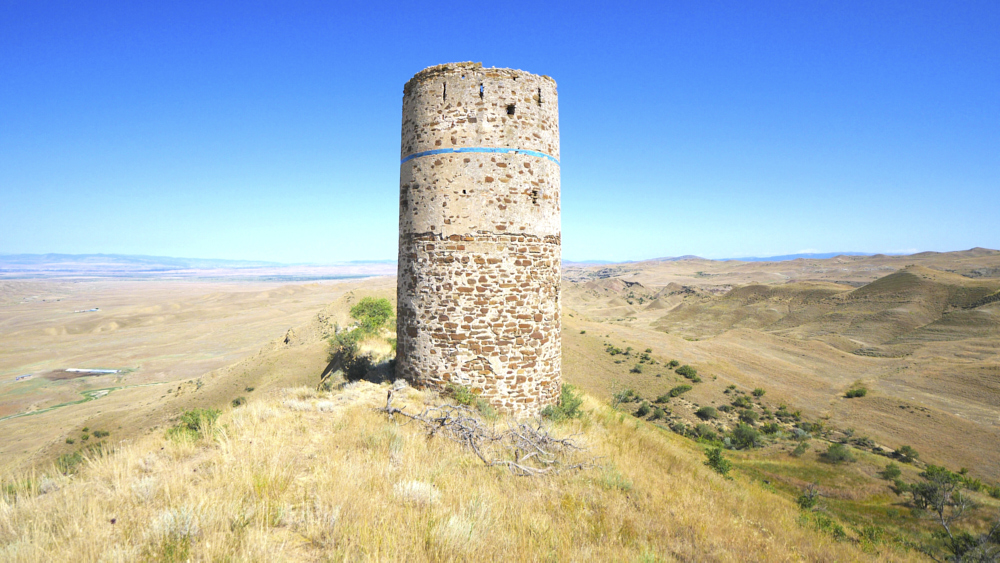 In town, our Georgian food in Kakheti and monasteries tour would continue with a traditional meat pie called kubdari at Oasis Club. There, we met Xavier and tried some chacha-cello, which is basically a Georgian limoncello. Then, we watched the woman add yeast, flour, a bit of salt, and lukewarm water to the flour.

Next, she showed us the meat filling! I tried some spicy chili powder, which goes in the filling, along with a spice blend of salt, coriander, caraway, fenugreek, and more. The chili was so hot, I needed water and bread to calm down the heat! The salt mixture was really tasty! 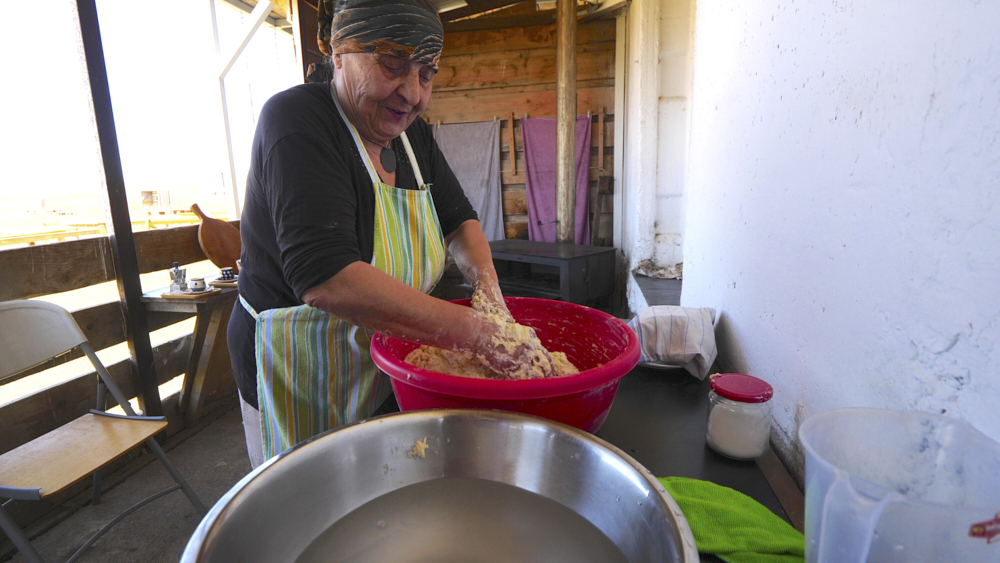 She uses the same amount of dough and meat and rolls it up and puts it in an old-school village-style oven. She also made us some khachapuri! On the rest of the property, they have a bar, a lounge area, outdoor seating, a terrace, a concert stage, and cattle pastures. 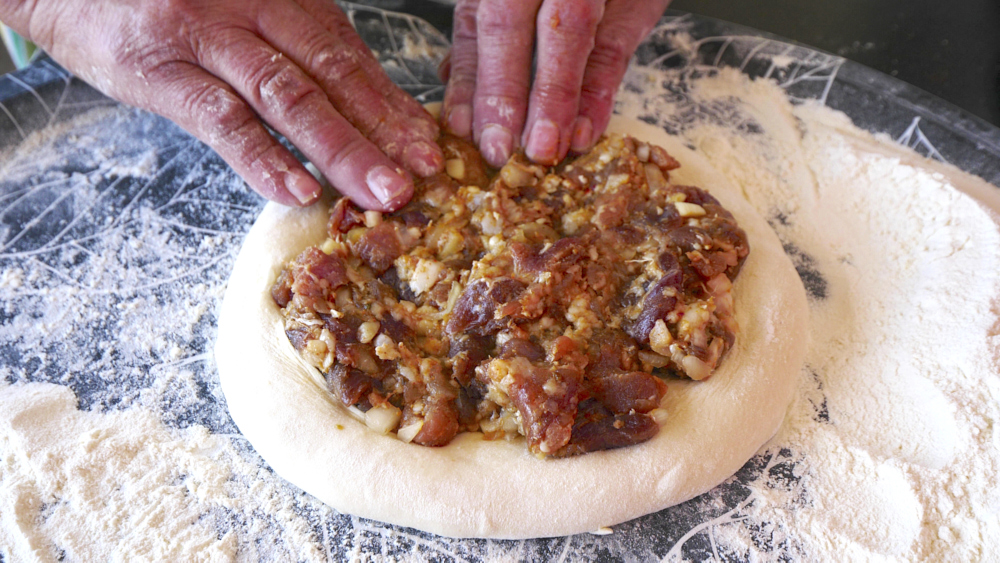 You can also stay overnight in one of their seven cottages. They’re really cozy and pretty! After the woman buttered and sliced the kubdari, it was time to eat. 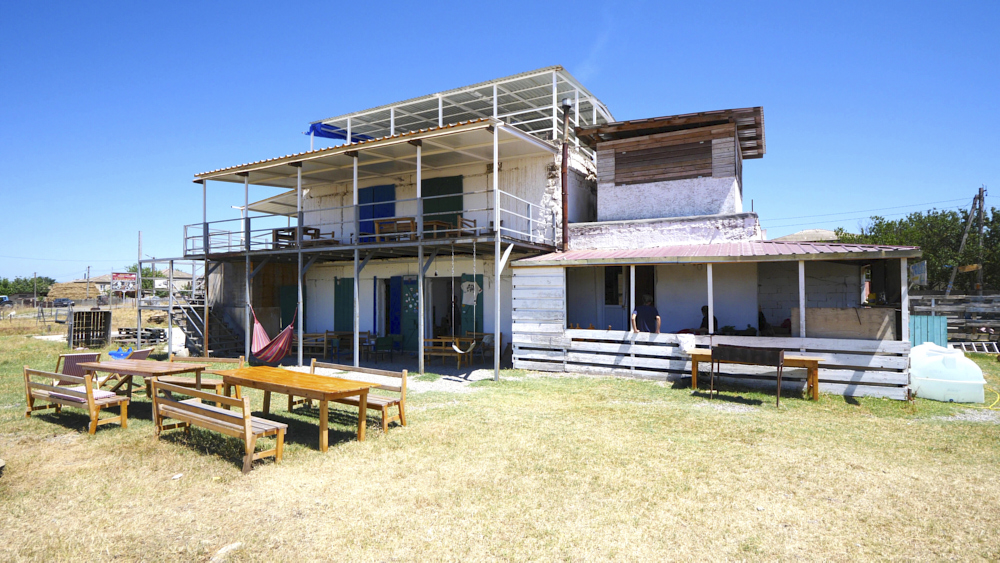 It was so juicy and the bread reminded me of focaccia. The meat was slightly spicy but not too bad. It was somewhat similar to a lamb pie I’d had in Greece. 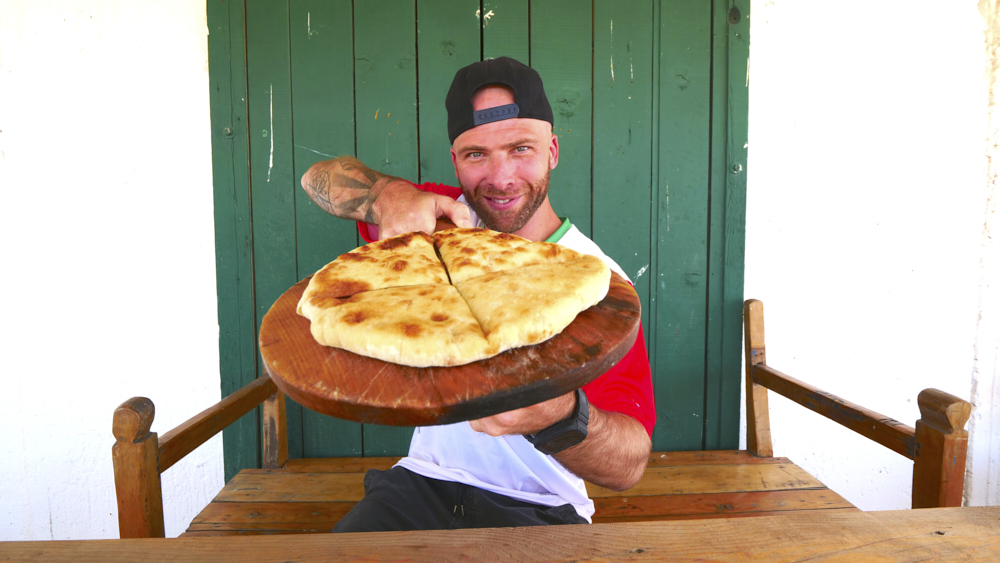 The spicy kubdari had a real kick to it. I liked it even more than the khachapuri I’d been eating every day! Next was some nice farm wine and the cheesy khachapuri. Cheese-wise, it was the best one I’d had on my trip! 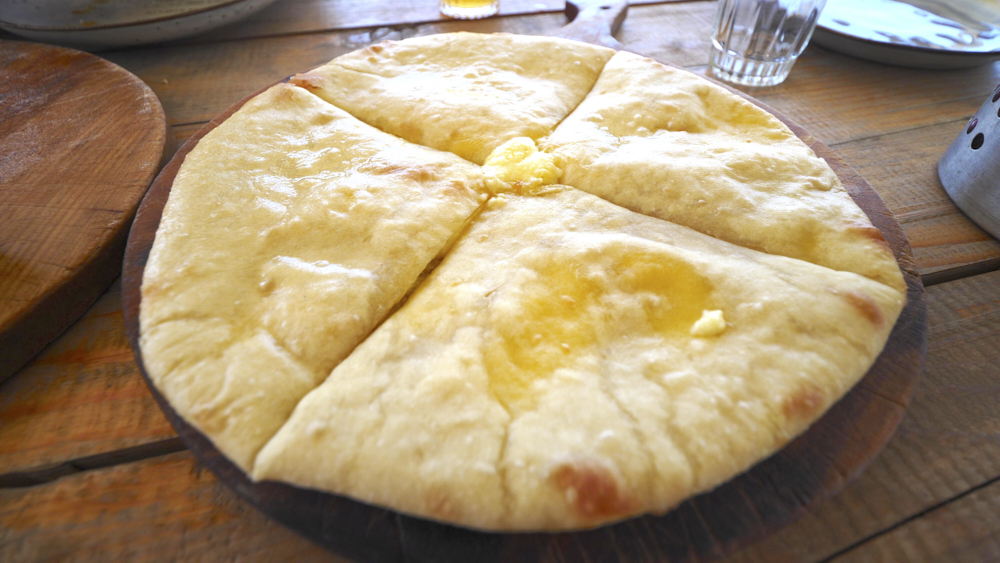 Then, after one more chacha-cello and some strong and citrusy tangerine chacha, it was time to continue my exploration of Kakheti! 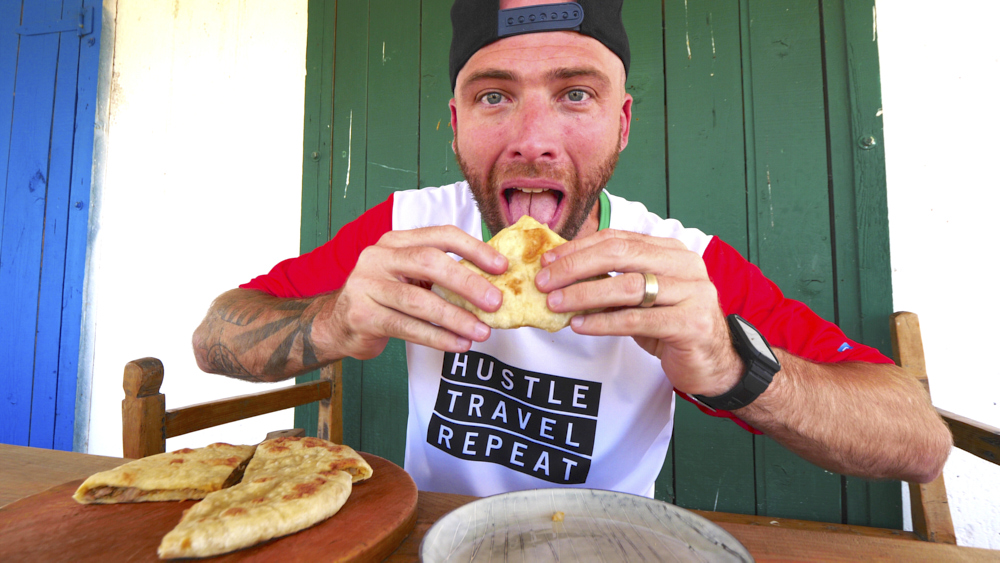 I hope you liked coming with me to try rustic Georgian food in Kakheti and visit the monasteries in Udabno, Georgia! If you did, please give this video a thumbs up and leave me a comment below. Also, please subscribe to my YouTube channel and click the notification bell so you don’t miss any of my upcoming travel/food adventures!