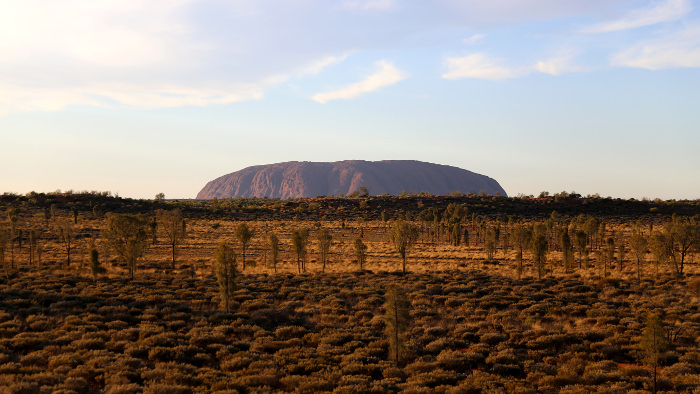 Uluru is the largest rock formation in the world, and you’d think that photographing this monstrous geological behemoth would be an easy task because, you know, it’s HUGE! But in reality capturing Uluru on camera was a challenge in many ways. First, some background information on one of the world’s most intriguing natural wonders.

Uluru is located within Uluru-Kata Tjuta National Park, a UNESCO world heritage site that is known for its desolate landscape. Perhaps the most important aspect of the area is its ancestral heritage. Although the park sits on Australian soil, it belongs to the traditional Aboriginal owners, the Anangu people. Uluru-Kata Tjuta National Park is situated in one of the world’s hottest regions, Australia’s Red Centre. Known for its harsh climate, most visitors would be surprised to know that when the sun dips down there are a multitude of desert creatures, many of which are marsupials, that have adapted perfectly to the Red Centre’s environment. 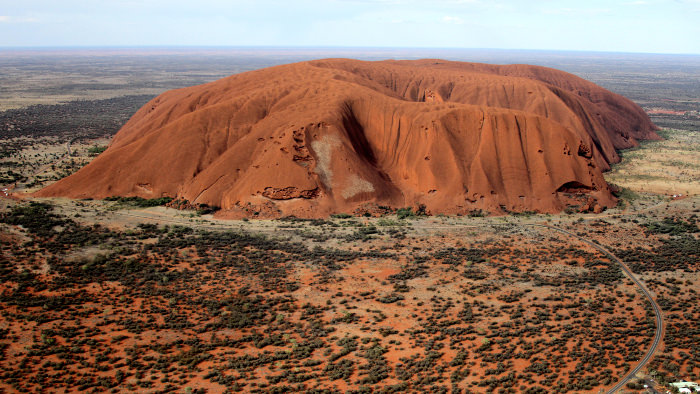 The Anangu people believe that Uluru and the land surrounding it was created by their ancestors. The marks left behind on the rocks dictate the laws they follow and live by. This is why there are many areas of Uluru that are too sacred for public viewing, and therefore blocked off. These sensitive areas are all marked with a red “S” and must be respected by all visitors at all times. The physical evidence of the Anangu ancestors is called “Tjukuritja.” Similar to the ancient Greeks, the Anangu people believe that titans once roamed the land, and their superhuman actions are still used to interpret many aspects of their lives. 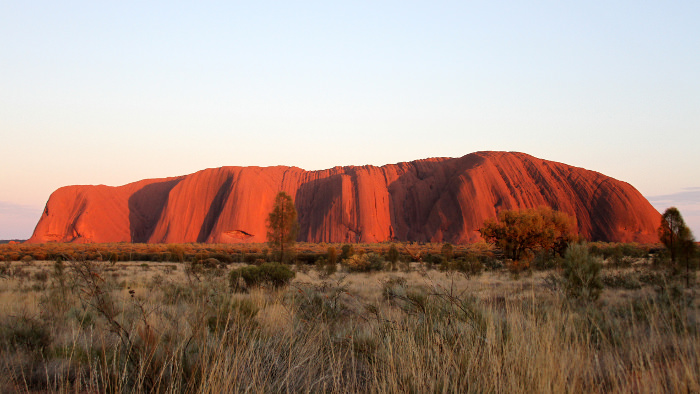 How did Uluru form?

There is a geological explanation for Australia’s two most iconic natural wonders, and the story goes like this. Both Uluru and Kata Tjuta began forming over 550 million years ago, when rainwater began to erode the nearby Peterman ranges. Loose sand and rock were washed away, spilling over the surrounding plains and eventually solidifying. Over the subsequent 50 million years, these solid formations were buried beneath an inland sea and covered in silt and mud. The weight of the sea and the erosion by the sea water caused the formations to change chemically and physically. One became conglomerate rock (Kata Tjuta) while the other turned to sandstone (Uluru). Eventually the inland sea dried up, and over the course of 400 million years, wind and rainwater erosion have given the exposed portions of the rocks their distinct shapes. What we see today are the different ridges, holes, caves, ripples, and domes that serve as a testament to the land’s ancient beginnings. 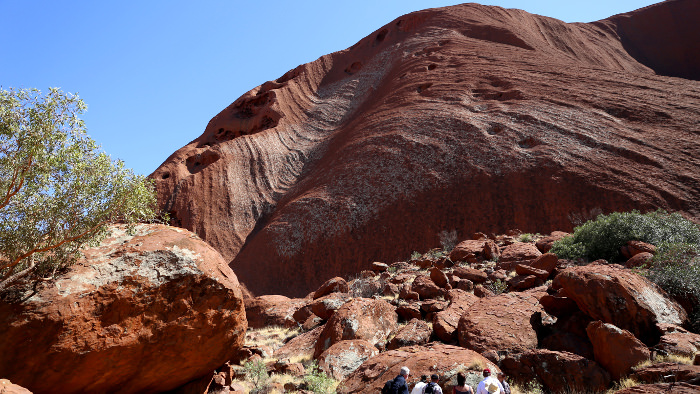 How can I see Uluru?

The perfect place to start is by learning about the Anangu at the Cultural Centre, which sits 13 kilometers past the entrance near the base of Uluru. Here you’ll learn about Anangu traditions and their ancient means of survival in Northern Territory’s harsh climate.

In addition to a guided walk, which can be arranged via the Cultural Centre or your hotel, you can experience Uluru in several ways. The first, and highly recommended way it so appreciate it from from the Sunrise/Sunset Viewing Area. You’ll have to get up before sunrise to catch the delicate light as it blankets the rock, but it’s totally worth the extra cup of coffee. No sunrise or sunset are ever the same, and the colors change dramatically during both times of day. 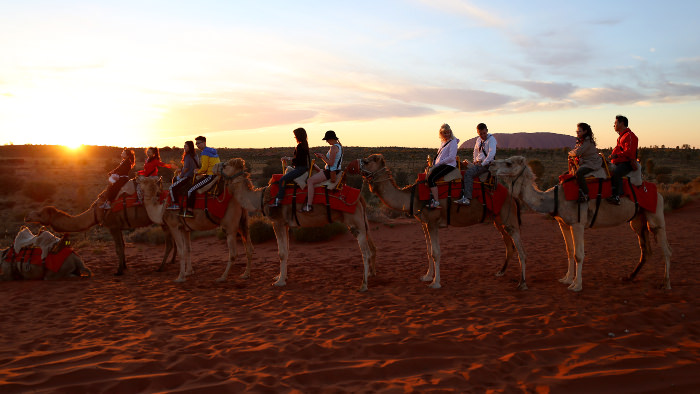 Another, way more exciting tour of Uluru is on camel back, which also requires you to wake up before dawn. For an hour you’ll get up close and personal with the sandy terrain as you sway on the back of your camel. You’ll learn about how the camel became instrumental in the development of Australia’s railway, and why there are thousands of wild camels still roaming the deserts of the Northern Territory. Do not forget your camera, the photos are likely to be phenomenal. Uluru Camel Tours provides sunrise and sunset tours, which include hotel transfers. 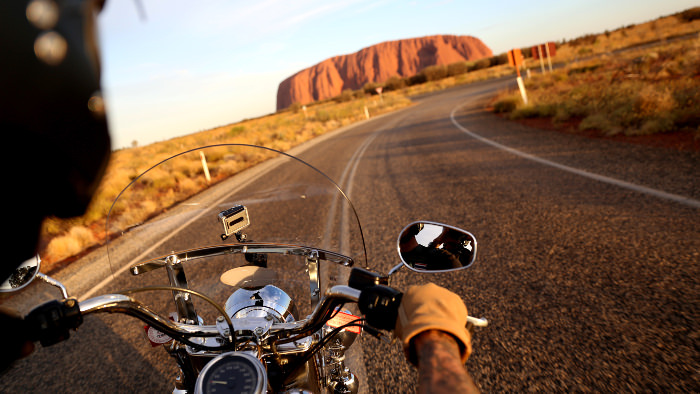 If you’re like us, you’ll want to take advantage of the sparsely habited area and hit the open road! How does a Harley Davidson tour sound? With the help of Uluru Motorcycle Tours we had one of the most thrilling experiences one could have in the desert. Cruising along the toasted highway you’ll get to take in incredible views of Uluru and the vast expanse of the park. The best part is you don’t even have to drive the motorcycle yourself so you can take all the photos you like. This may be one of the pricier ways to experience Uluru (appr. $150 per person), but it’s definitely one of the most unique and exciting. There are several motorcycle tours to choose from depending on what you want to see. At the end of your tour you’ll get to toast with a bottle of bubbly. And, of course, pose with the Harleys for bragging rights. 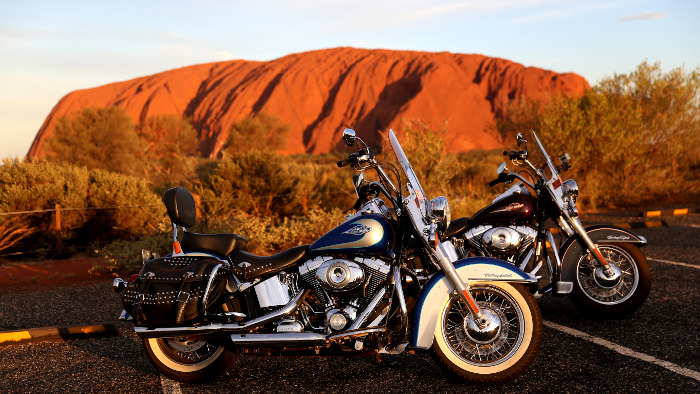 If you think we ran out of ways to experience Uluru, you’re wrong, and this tour beats them all! The ultimate way to see Uluru-Kata Tjuta National Park is to take a scenic helicopter ride. If you’ve never been in a helicopter before, this is the perfect place to do it. Besides the excitement of hovering over Australia’s outback, you’ll be able to get aerial shots of the landscape. We recommend the 30-minute Uluru-Kata Tjuta flight by Uluru Helicopter Tours so you can see both of these impressive rock formations from above. At $225 per person, it’s a fair price for the extraordinary vistas and thrilling experience. 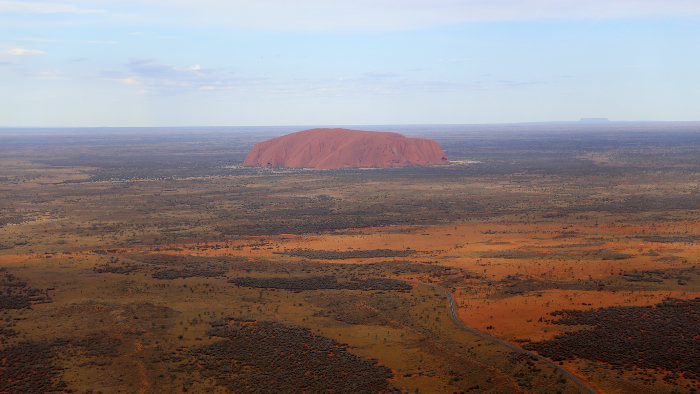 Why was filming Uluru such a challenge?

For the average tourist, taking personal photos of Uluru is not a problem so long certain sacred sites are not disturbed. For travel writers and producers, there is an entirely different commercial protocol that must be followed. First, a request to film and/or photograph the park must be submitted to the media office at Kata-Tjuta National Park. Once approved, all media crew members must accept the strict terms and conditions, namely that they will not capture any images of the park without explicit approval. A media officer must accompany you at all times you are in the park, and approve every shot, clip, or selfie for social media you wish to post online. Even in places like the sunrise/sunset viewing area where tourists are snapping away, media crews must wait for their media officers’ go ahead before capturing any images. Though tedious and sometimes downright annoying, we understood this was to protect the traditional owners’ culture from being used for monetary gain. With this said, Uluru was a special and unforgettable experience, and one that I deem a “must” when in Northern Territory. 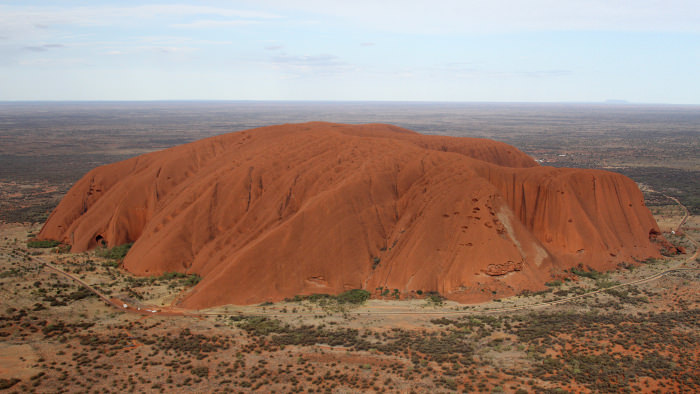 The best way to get to Uluru is to take a direct flight with Qantas from Cairns or Alice Springs, or with Virgin Australia from Sydney. There are a several accommodations to choose from, all of which cater to different budgets, and all of which are located in the beautiful Ayers Rock Resort. The resort has six different types of accommodation ranging from luxury to camping. All are walking distance from each other and the resort’s town square, which has dining, shopping, ATM machine, beauty salon, and information center. All tours of Uluru mentioned in this article include pick up and drop off from every hotel in the resort. If your budget allows, the Sails in the Desert Hotel is an excellent choice. For dining, we recommend the Arnguli Grill, Outback Pioneer BBQ, and Ayers Wok Takeaway. Watch a video about The Rock of Uluru. 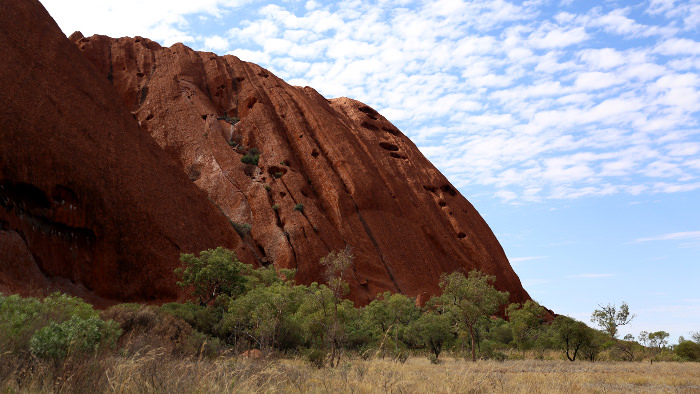 Have anything to add or ask about Uluru? We welcome your feedback! Please leave a comment below.

To the best of our knowledge, all of the information provided in this post was accurate at the time of publishing. Davidsbeenhere.com, LLC. assumes no responsibility for changes or errors. Special thanks to Tourism Northern Territory. All opinions are our own.