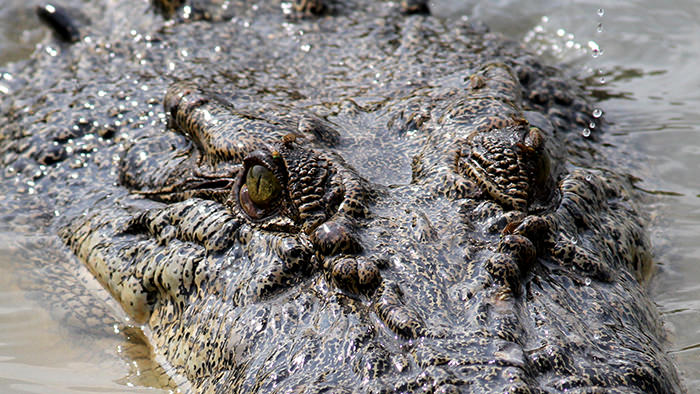 Ever seen a dinosaur up close? Sure you have if you’ve ever witnessed a crocodile basking in the sun. But don’t let its seemingly relaxed demeanor fool you. These creatures are the result of millennia of evolution, their species remaining virtually unchanged since the late Cretaceous Period over 65 million years ago. The Adelaide River jumping crocodiles are no exception. 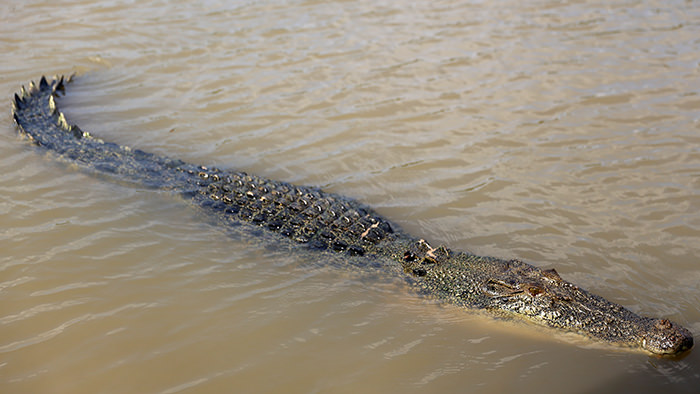 Why? Because they are the perfect killing machine and flawlessly adapted to their aquatic environments. While we’ve been adapting our bodies to have less hair, larger brains, and walk upright, these guys got it right the first time. Why mess with perfection, right? Adelaide River jumping crocodiles are a true force to be reckoned with! 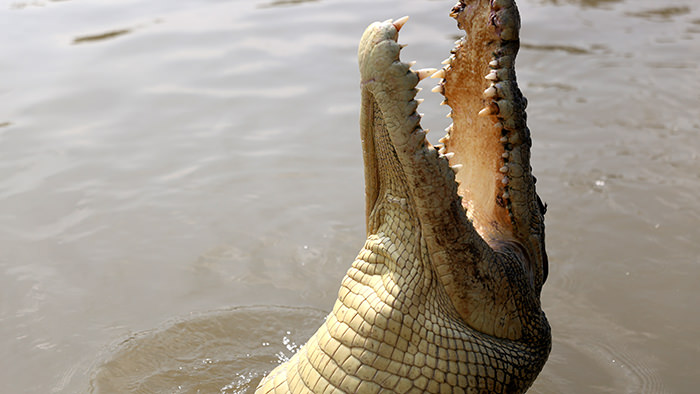 Of all the croc species out there, the saltwater crocodile (Crocodylus porosus) or “saltie,” is the largest and most ferocious. Saltwater crocodiles get bigger than any other reptile on earth and can weigh over two tons! Saltwater crocodiles are opportunistic ambush killers with the strongest bite of any living animal. When you hear a croc’s jaw snap shut, it’s a sound you will never forget. 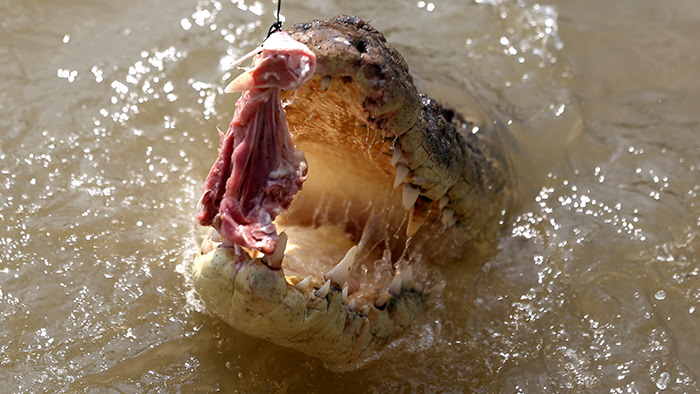 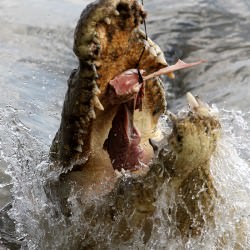 Though they can be found throughout Southeast Asia and India, the saltwater crocodile is thriving in Australia, especially in the river systems of the Northern Territory. The Adelaide River jumping crocodiles, in particular, are some of the most impressive specimens of the region. “Jumping croc” tours have become somewhat of a phenomenon here, where curious tourists load onto a boat and watch with horror/fascination as these enormous 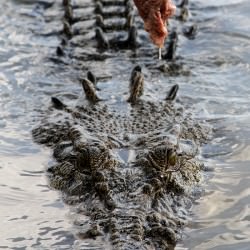 crocodiles jump almost completely out of the water to nab food.

But before you get visions of Steve Irwin wrestling down six-footers and duct-taping their mouths shut for safe transport, know that the Adelaide River jumping crocodiles are highly territorial and aggressive, so only your tour guide will be doing the feeding from a fishing pole.

These guys are huge! Take a look for yourself. 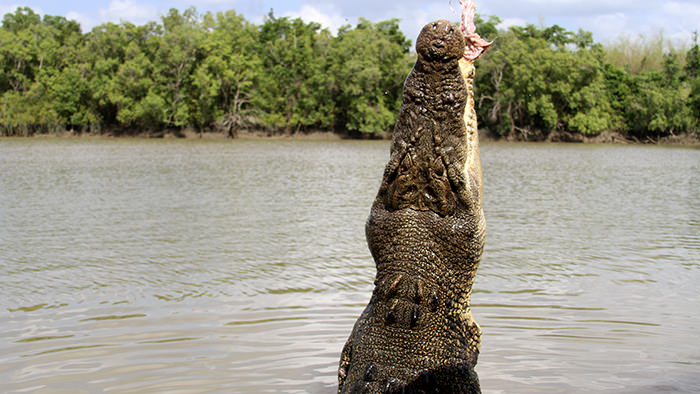 It’s not uncommon to see crocs with missing limbs, eyes, or deep scars. They are more than capable of taking your arm off with just one bite, which is why you must keep every part of your body that you wish to take back home with you on the boat at all times.

We joined a tour with Wallaroo Tours and watched in amazement as these giants leaped out of the water for a turkey drumstick (apparently their favorite snack). We were told that the crocs we saw included a rare albino one named Michael Jackson, as well as other 10, 14, and 16-footers, most of them male. We could literally see crocodiles coming from every direction swimming towards the boat, as well as dozens of others basking along the river banks. Our guide told us that if a person happens to fall into the water, he or she would have absolutely no chance of making it back to shore alive. But thankfully, you are safe as long as you’re on the boat. Accidents happen when people act irresponsibly and in their turf, we are low on the food chain.

“Security is mostly a superstition. It does not exist in nature.” –Helen Keller 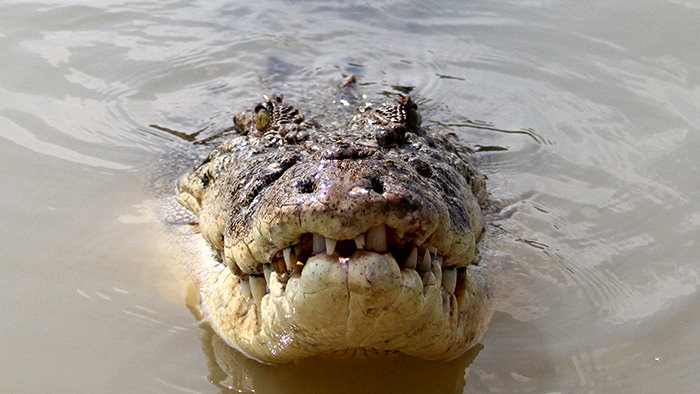 If you find yourself in the Northern Territory and would like to experience the Adelaide River jumping crocodiles, you’ll be spoiled for choice at all the croc cruises available to you. We went with Wallaroo Tours, which was a combo day trip that included the jumping croc cruise, a lovely afternoon in Litchfield National Park, and a champagne sunset. Like Wallaroo, most tours include pick up and drop-off to your hotel in Darwin. 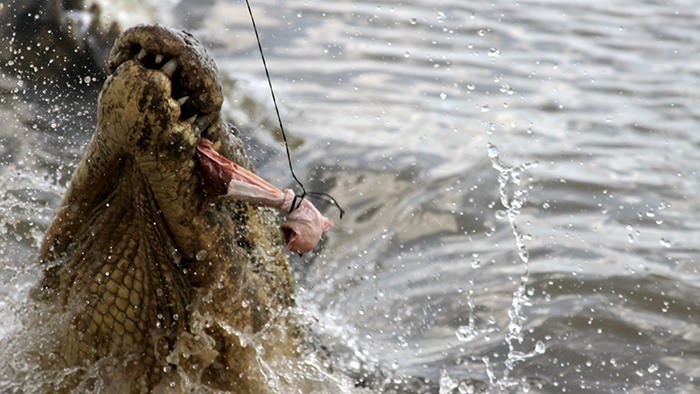 The question is, should you do it? The answer is YES! These creatures evoke primal fear, awe, but most of all respect for being the world’s most successful predators. If you don’t want to the croc experience to stop here, see how I survived the Cage of Death at Crocosaurus Cove in Darwin. Click here to watch the full episode of the jumping crocodiles.

Have you seen/ want to see the Adelaide River’s jumping crocodiles in the Northern Territory? Let us know what you think. Leave a comment below!

Special thanks to the official sponsor of our 2013 NT Australia trip, Tourism NT.