Discover six of the top things to do in Tokyo by writer, Erin Bogar.

Ride the Boat from Asakusa to Odaiba 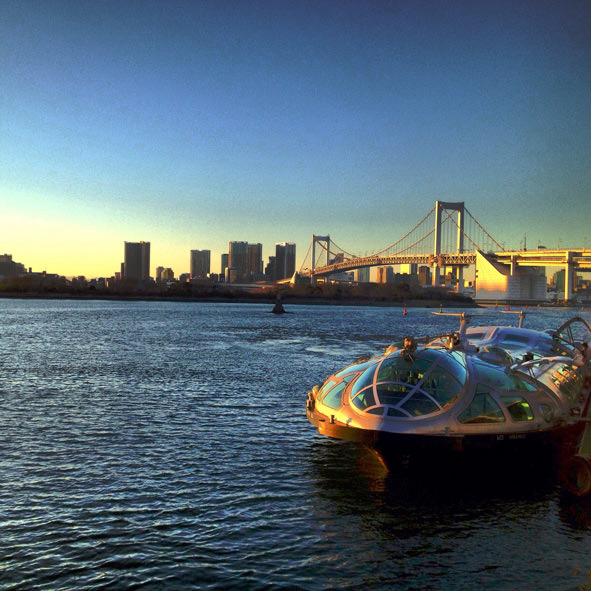 Asakusa is home to Tokyo’s oldest temple, Senso-ji. It’s a district rich in history with an old world appeal.  Nakamise Dori, the street leading up to Senso-ji, is full of shops selling brightly colored kimonos, noren (tapestries traditionally hung at shop and restaurant entrances to protect from sun and dust), and all kinds of delicious traditional foods like okonomiyaki (savory pancakes with various ingredients) and tako yaki (fried octopus dough balls). After a visit to Senso-ji, I recommend taking a stroll along the nearby Sumida River and catching the boat to Odaiba.

The fifty minute ride cruises along the Sumida River, beneath bridges, past fishing boats, and into Tokyo Bay. Odaiba is a manmade island in the bay with futuristic architecture, the National Museum of Emerging Science and Innovation, the Aqua City shopping complex, and Venus Fort, a kitschy mall designed to look like a medieval European town. The most memorable part of Odaiba are the spectacular views of Tokyo Bay, Rainbow Bridge – stark white by day and lit by multicolored lights at night, Tokyo Tower, and Tokyo’s miniature Statue of Liberty.

View Tokyo from Above 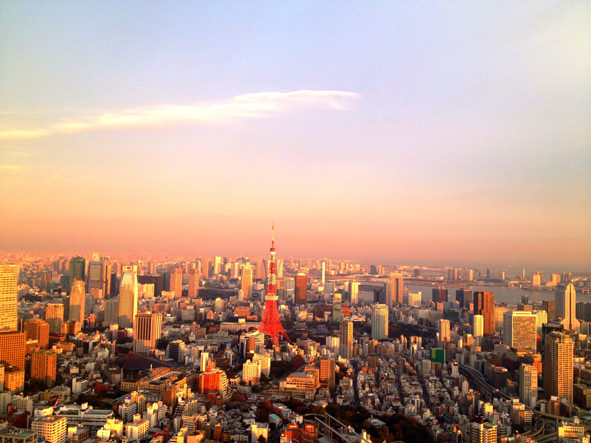 From a perch above the city, Tokyo expands in all directions like a growing universe of concrete and steel. The Roppongi Hills Mori Tower observation deck has 360 degree views of the city, including close up views of Tokyo Tower, the city’s orange and white Eiffel Tower replica, and the Rainbow Bridge to Odaiba. The entrance fee for the observation deck includes a ticket to the Mori Art Museum with rotating modern exhibits like Andy Warhol 15 Minutes Eternal and Aida Makoto’s Monument for Nothing. Mori Art Museum is part of ATRo, the Art Triangle of Roppongi, which includes Mori Art Museum, The National Art Center, and Suntory Museum of Art.

Tokyo’s newest and tallest tower, Tokyo Skytree (pictured below), has two viewing decks. The Tembo Galleria at 1476 ft (450m), the world’s highest sky walk, and Tembo Deck at 1148 ft (350m). At its base is Tokyo Solamachi, a village of restaurants, shops, and open space along with the Sumida Aquarium and Planetarium Tenku. 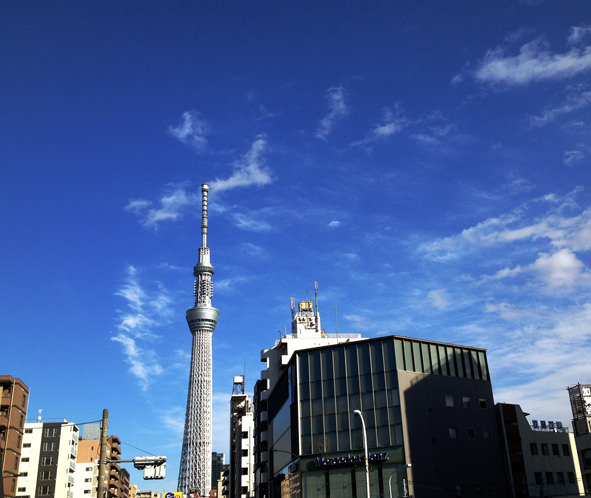 The most affordable view in town is at The Tokyo Metropolitan Government Building, which has two free observation decks, one in each tower on the 45th floor. From the decks you can see Shinjuku’s skyscrapers and on a clear day Mount Fuji. 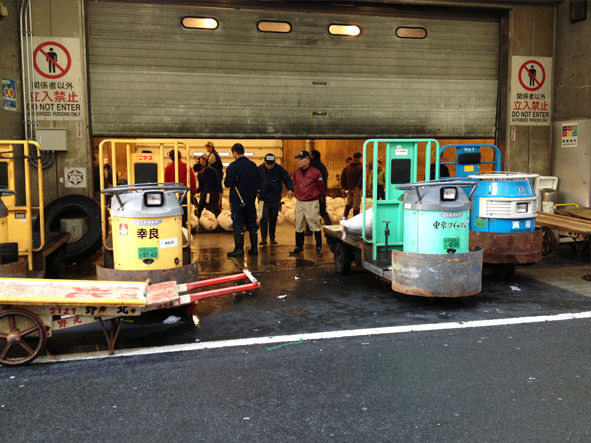 Arrive at the market by 4am if you’re hoping to be one of the 120 people allowed each day to watch the predawn tuna auction. Even though it’s early, you want to be alert because the group is escorted around the bustling market while fishmongers buzz past on electric carts with little patience for tourists who get in the way.

If you’re not an early morning person, come to the market around 9am to walk through narrow lanes crowded with fish and produce and taste the freshest catches of the day at nearby sushi restaurants, open from around 5am-Noon. 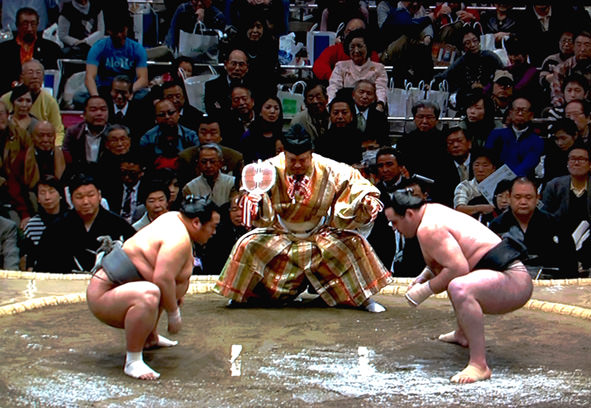 January, May, and September are Sumo time in Tokyo. This centuries old sport is still going strong throughout Japan. Sumo is part ritual, part sport and Shinto rites such as salt purification are still an important piece of the competition. Sumo wrestlers are incredible athletes and the top competitors quickly gain celebrity status in Japan. Go to Ryoguku Kokugikan Sumo Hall and watch two sumos with legs like tree trunks battle to be the first to push their competitor out of the ring.

Go out for drinks in Golden Gai 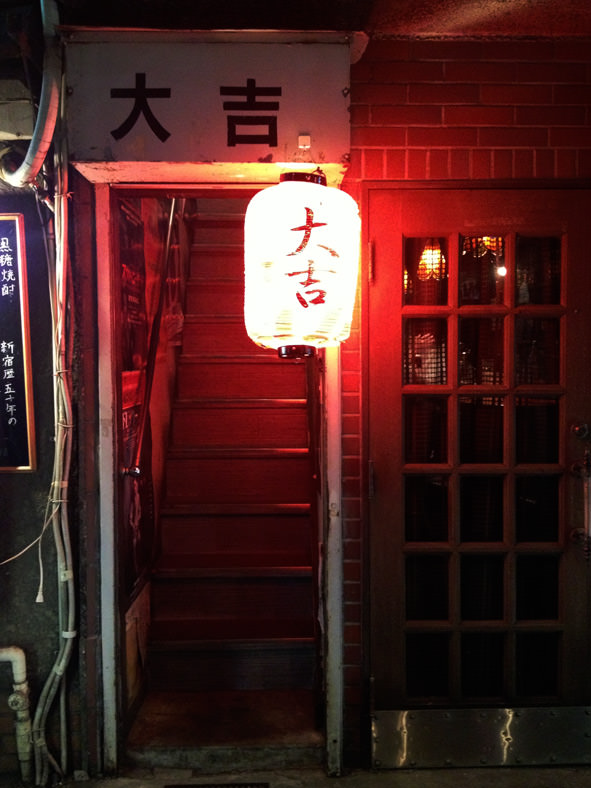 Golden Gai is a small area of tightly packed tiny bars located behind the Best Western in Shinjuku. This area is popular among actors, directors, writers, and artists, but not all bars are open to tourists – look for signs in English as an indication of a foreigner friendly locale. The narrow lanes and two-storey buildings remain a piece of Tokyo’s past. Golden Gai transitioned from post-WWII black market to brothels and finally to bars when prostitution became illegal in the late 1950s. The area has remained largely unchanged and is a reminder of what the streets of Tokyo were once like. 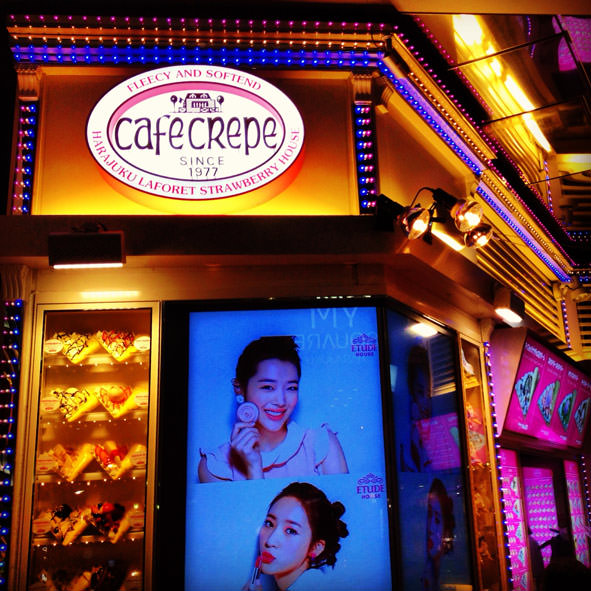 Erin Bogar is a freelance travel writer, personal trainer, and the Tokyo Destination Page Curator for AFAR.com. She’s lived in Buenos Aires, Nagoya, and Tokyo and covers expat life, art and design, food, and adventure travel at BlaineandErin.com. Erin and her husband Blaine decided the world is much too large and amazing to stay stuck behind desks. So they’ve made it their goal to travel through the world doing anything but working in an office 9-5. Follow their adventures on Twitter and Facebook.