Durian. You’ve heard it smells like the locker room of a high school football team – after they’ve all doused themselves in Axe.

You’ve heard that it’s a fruit so powerfully odiferous that it’s banned on subways and hotels in Southeast Asia.

What you probably haven’t heard is that it’s the most loved and celebrated fruit in Thailand, and there are multiple festivals held in its honor each year in the summer months between April and August.

Known as the King of Fruit, this spiky monstrosity has an interior so creamy, sweet, and flavorful you won’t believe that it wasn’t whipped up in a French patisserie. Smells like hell, people say, but tastes like heaven. Many people find it mildly addicting.

But besides the opportunity to pig out on a seriously delicious fruit, the coolest part about attending a durian festival in Thailand is that you also get to have a truly authentic cultural experience.

Durian festivals tend to occur just outside of the normal tourist’s field of awareness.  They may be just around the corner from a temple attraction or in a far-flung remote village, but either way they’re usually advertised to Thai tourists looking for a fun weekend event.  Attending one is a great excuse to jump off the beaten path and travel like a local.

Here’s a look at some super cool durian festivals coming up this summer that you can add to your travel itinerary. Try something new, and enjoy the adventure! 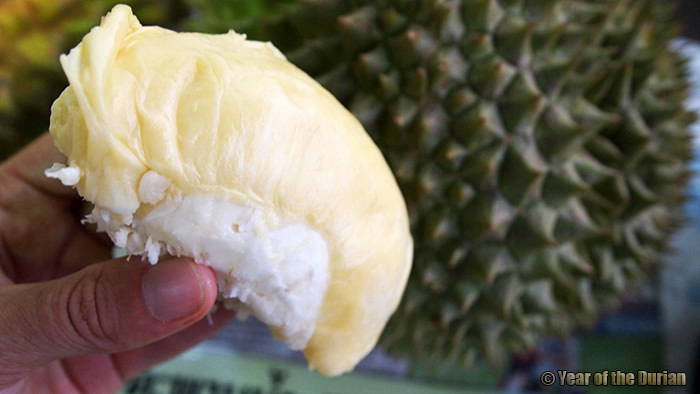 The festival in Chanthaburi City is the longest running durian-centric festival in Thailand. Formerly called the World Durian Festival, the organizers changed the name just this year to incorporate other fruits. That doesn’t change the focus – this province is still the number one producer of durian in Thailand, and durian is everywhere.

In Chanthaburi, you’ll see durian on the street signs, city emblems, and car license plates no matter what time of year it is. Between April and July, be prepared for lots and lots of stinky fruit.

The festival takes place around the man-made lake in the center of town. Highlights for fruit lovers is a free fruit tasting tent, a durian speed-eating contest, numerous stalls selling durian, and a tent run by the local horticultural research center that gives free tastings of different durian varieties. However, the festival has now grown to incorporate an enormous labyrinthine bazaar, an extensive night market, and multiple stages for music and entertainment. 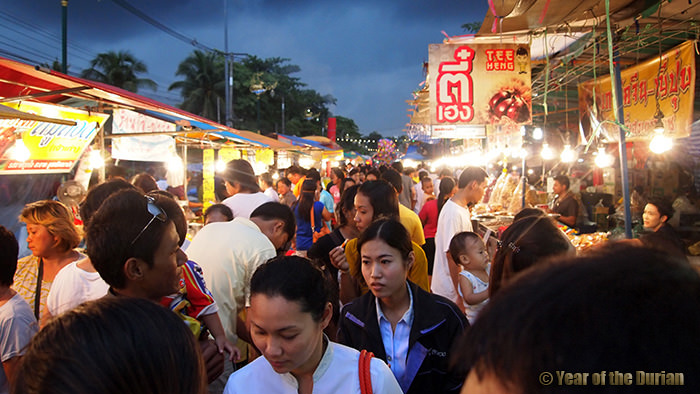 The festival will take place this year from June 1-10 in downtown Chanthaburi, about a 3 hour drive from Bangkok.  The combined allure of the festival and the deserted beaches make it a popular weekend outing for families from Bangkok, so make sure to book a hotel room in advance if planning to stay overnight. 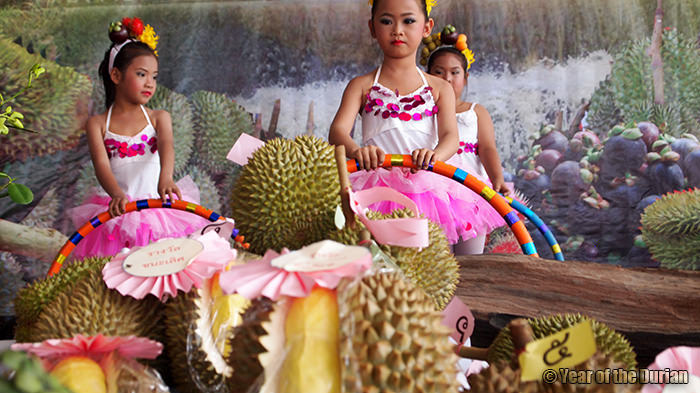 The festival in Laplae is the largest event of the year for this small, little visited district in Thailand’s mountainous northern interior. Orchards here are planted on hillsides so steep farmers use pulley systems to transport baskets of durian across the mountain gorges.

Lablae means “the hidden city,” and this little corner might have remained in obscurity except for their durian. The region has been making headlines for years because their durians lack the famous offensive odor. Although Thai scientists have been trying to breed an odorless durian for years, these durians just naturally popped up in somebody’s yard. 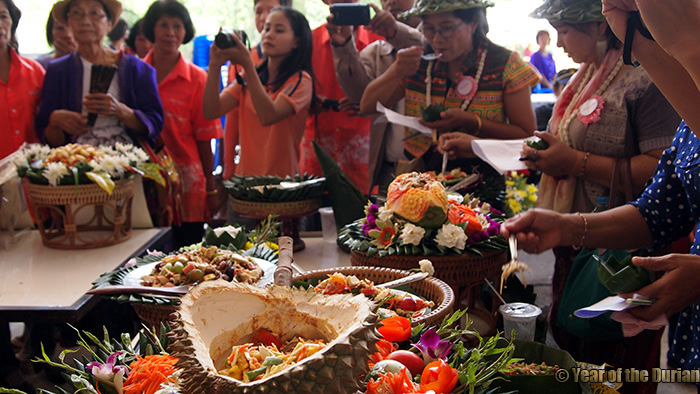 Highlights of the festival include tasting the nearly odor-free durians and attending a rowdy a contest in which contestants prepare a durian version of a Thai pounded salad – som tam – while dancing to a lively traditional band.  The cacophony and flying stone pestles feels dangerous enough without watching out for the wickedly thorny 10 lb fruits piled around.

This year’s festival will be held on July 17-20th at the fairgrounds just north of Laplae City. Accommodations in Laplae are few, so you may want to stay in neighboring city, Uttaradit City, about a 3 hour drive south from Chiang Mai. 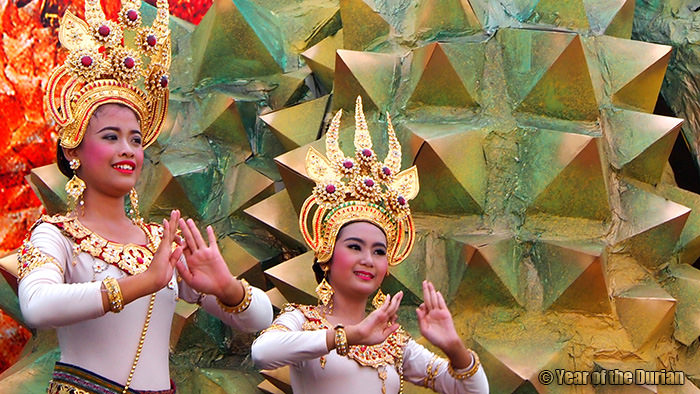 The festival in Si Sa Ket is one of the newest durian festivals in Thailand and a great excuse to visit the Isan – the hot, dry tablelands peppered with crumbling Khmer ruins in the far northeast corner of Thailand.

Durian is a relatively new crop in a landscape that has changed little over the last few centuries.  Endless fields of rice, cassava, and herds of water buffalo dominate this neglected backcountry, where the people speak a distinct dialect of Laotian instead of Thai. It is Thailand’s poorest region.

In the 1990’s, farmers realized that durian could earn more money for less work than growing other crops. The Si Sa Ket durian festival is both a celebration of the harvest and the escape from the drudgery and poverty of rice farming.

The festival takes place at the Agricultural College on the outskirts of town in a football-field sized space no longer large enough to hold the sprawling assortment of vendors and booths. Highlights of the festival include the exotic Isan food carts and the elaborate performances that go on from early morning to late at night on the large stage. Grab a seat, a durian or two, and sit back to watch the show.

This year’s festival will take place August 8th to 14th within walking distance of downtown Si Sa Ket City, about an 8 hour drive from Bangkok. Because of its remote location and distance from Bangkok, taking the train is a great option. Plenty of upscale hotels for a bargain price can be found near the train station. 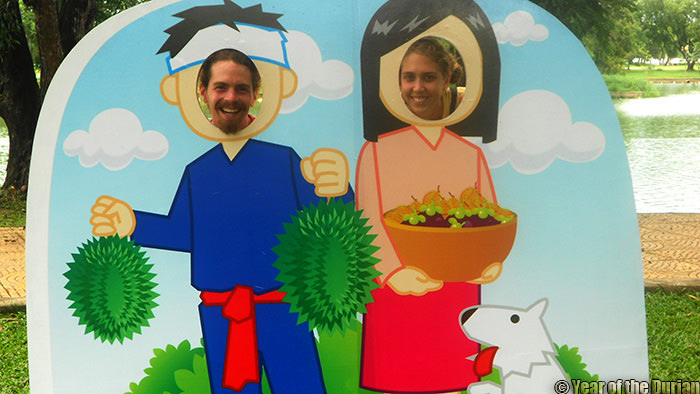 Lindsay Gasik is a travel blogger, photographer and fruit nerd who has been traveling in Southeast Asia with her husband for over two years looking for durian.  She is the voice behind www.yearofthedurian.com, a blog documenting their adventures through the jungles and farms of 12 countries in Asia.

Their off-beat adventures have given them a unique perspective on foodie culture, politics, and environmental issues in the region. They use their passion for durian to help people get more enjoyment out of eating durian by connecting them with the human and natural story behind where their fruit comes from.

If you have been to either of these durian festivals we would love to hear back from you. Want more Thailand? Here are 15 places you must see in Thailand.

One thought on “Three Awesome Durian Festivals in Thailand”