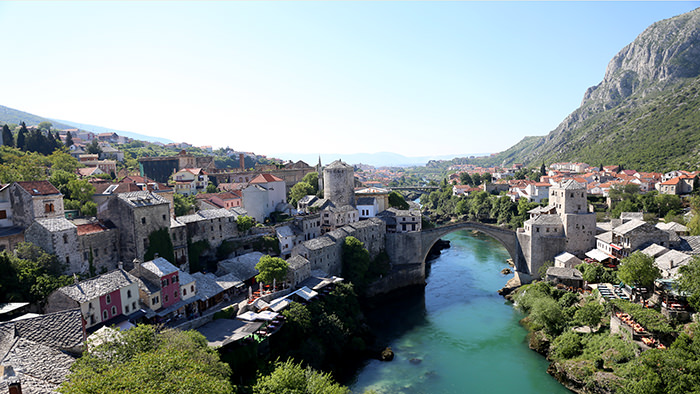 Considering the fact that the Kingdom of Bosnia was under Ottoman rule from 1463 until 1878, it’s no wonder why many cities in modern-day Bosnia and Herzegovina hold plenty of architecturally significant buildings that were created by the Ottomans, following their traditional architectural style. 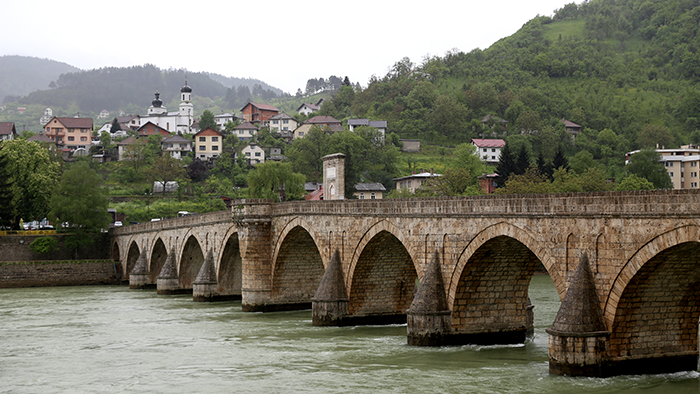 An important part of Ottoman heritage in Bosnia and Herzegovina is the Ottoman bridges, most of them built between the 15th and 16th centuries. These bridges are remarkable due to their massive pillars, pointed arches, cornices, buttresses, and the circular and polygonal structural openings. 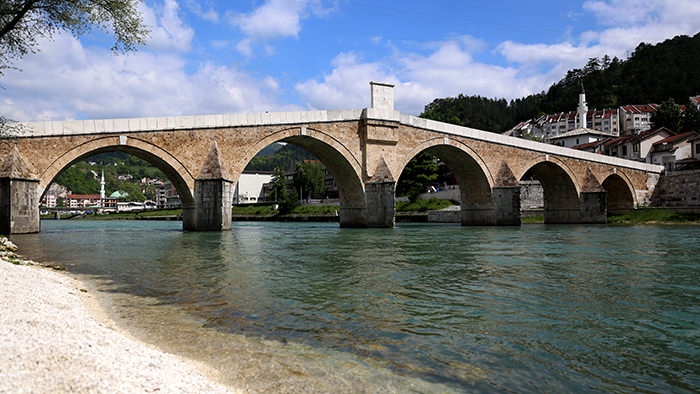 Stari Most (the Old Bridge) has become an icon for the city of Mostar and, as a matter of fact, for the entire country. Currently it is a UNESCO World Heritage Site. 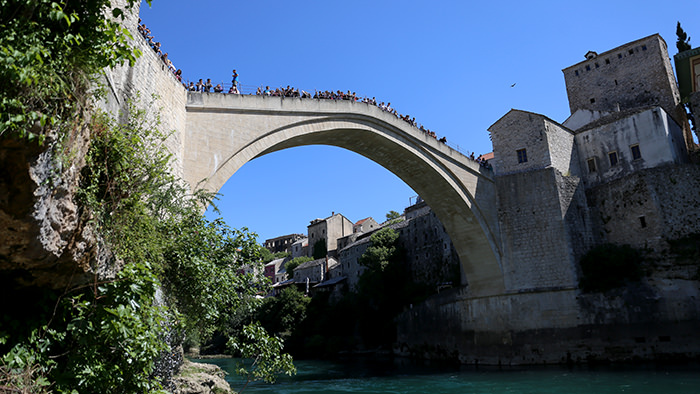 Stari Most is a symbol of tolerance and a reminder that even though the Bosnian War, peace between the people of Mostar is possible again. The bridge was completely destroyed during the war, but the citizens of Mostar managed to move forward, to find the much needed equilibrium to live in harmony, and to rebuild the famous Stari Most. 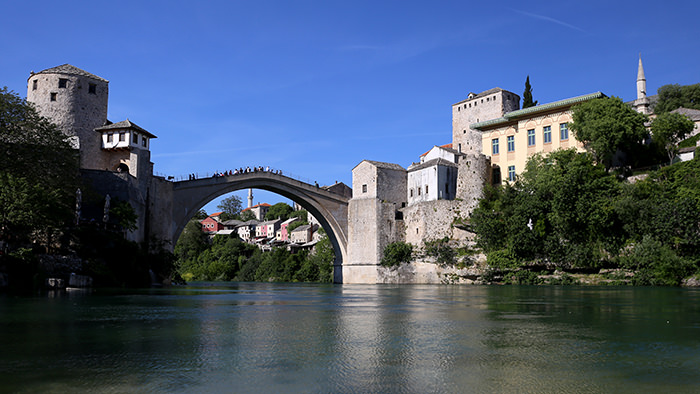 Stari Most bridge crosses the Neretva river and it was initially built from the orders of Suleiman the Magnificient, in 1557, in order to replace a wooden suspension bridge. The construction was finalized nine years later and broke the record for the widest man-made arch in the world, at that time. 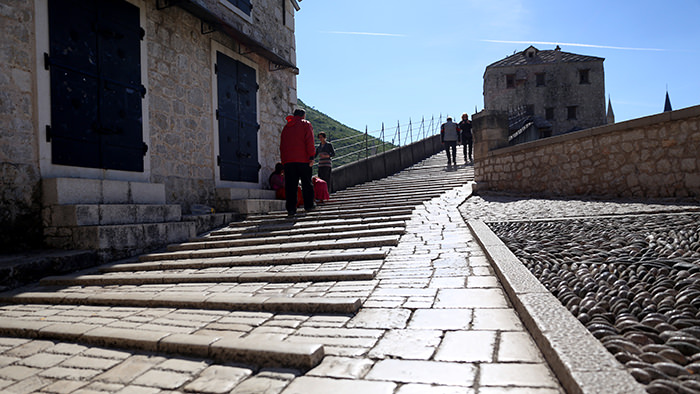 Stari Most was destroyed on November 9th, 1993, but it was rebuilt between 2001 and 2004 with pieces of the old bridge being incorporated into the structure. It is protected by two towers: Helebija and Tara Towers, which are called “mostari” (the bridge keepers).

Since this bridge is the most visited attraction in town, around it you can find many cafes, restaurants, souvenir shops, and art galleries. If you’re lucky you can see one of the famous divers of Mostar jumping into the freezing river below – an annual tradition here since 1968. 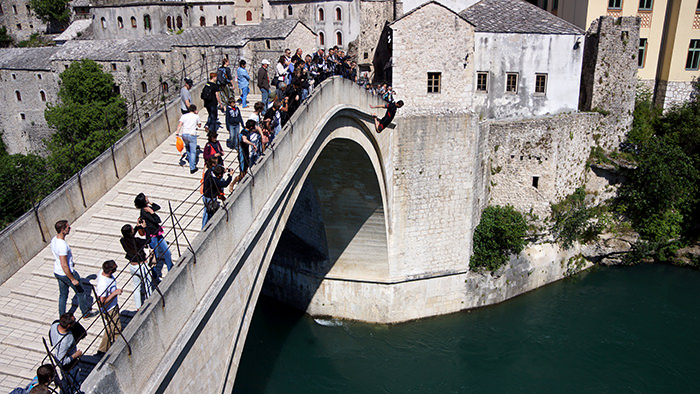 Tip: if you want to see a diver jump, you’ll have to pay up. These are professional divers that charge 25 euros per jump. As you can see in the photo above, the best place to watch the divers is from the cafe on the north side of the bridge. 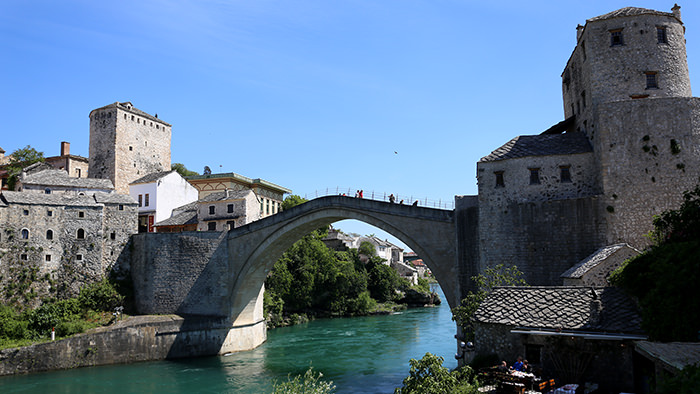 Find out more about this bridge by visiting the Old Bridge Museum situated at the eastern side of Stari Most.

The old town of Konjic is dominated by this beautiful six-arched Ottoman bridge originally built between 1682 and 1683. The Old Stone Bridge was back then one of the most impressive monuments in Bosnia and Herzegovina. 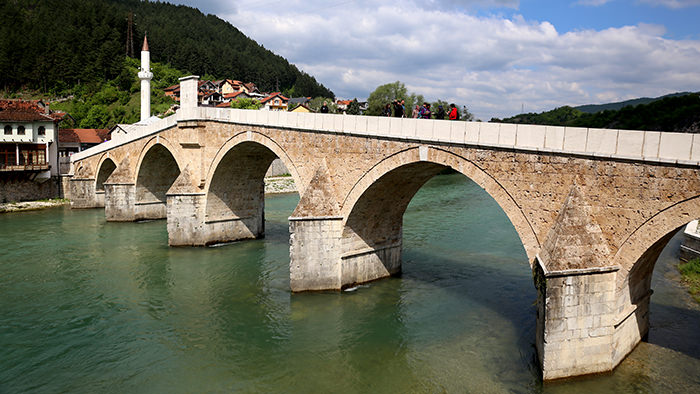 Unfortunately, on March 3rd, 1945, it was destroyed by German troops. Its reconstruction began in 2004 and was financed by the Turkish government. The new Old Stone Bridge was inaugurated on May 23rd, 2009. 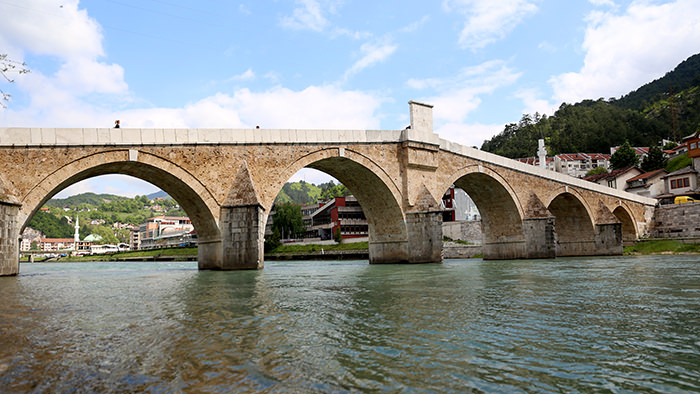 The views that can be captured from this bridge are absolutely amazing and the Old Stone Bridge is again the center of attention for all visitors who come to Konjic. 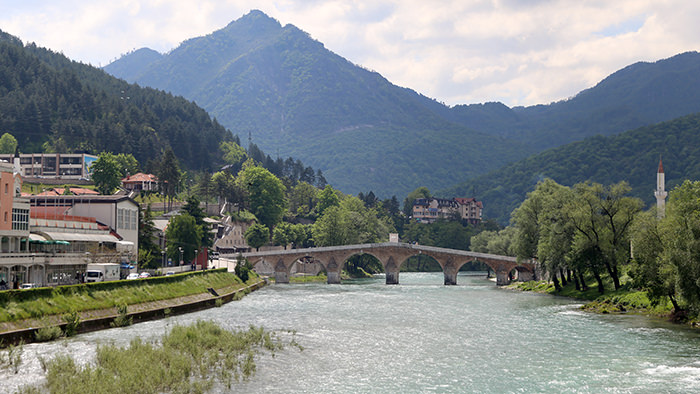 Tip: If your starting your trip in Sarajevo you will either be driving to Mostar or flying. If you drive or take a bus you will be able to visit this incredible bridge. You really only need 10-20 minutes to see the bridge from all angles.

The Arslanagić Bridge has quite an interesting story to tell to all those who visit the town of Trebinje, a city situated only 28 km from Dubrovnik, which houses a picturesque Old Town. 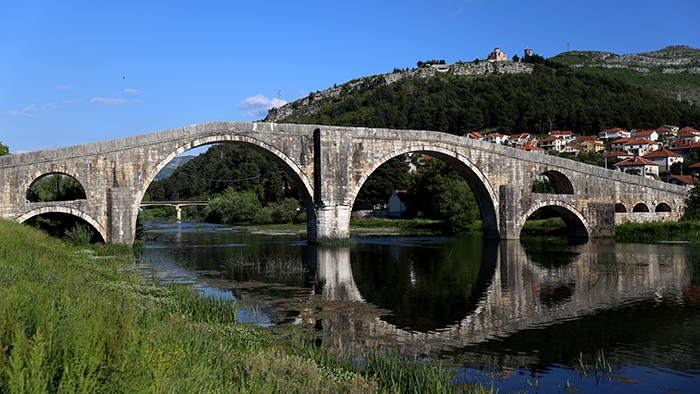 This bridge was built in 1574, by Mehmed-Paša Sokolović, a member of the Arslanagić family, in the village with the same name, situated 5 km from the north of Trebinje. It is one of the most beautiful Ottoman bridges in the country and is defined by two large and two small semicircular arches. 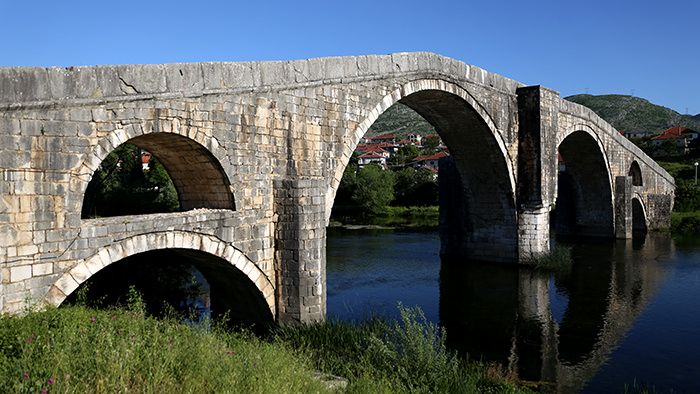 However, in the late 1960s, due to the necessity of the Grancarevo dam to prevent the waters of Trebisnjica River from destroying the bridge, it had to be moved (stone by stone) into the old center of Trebinje. 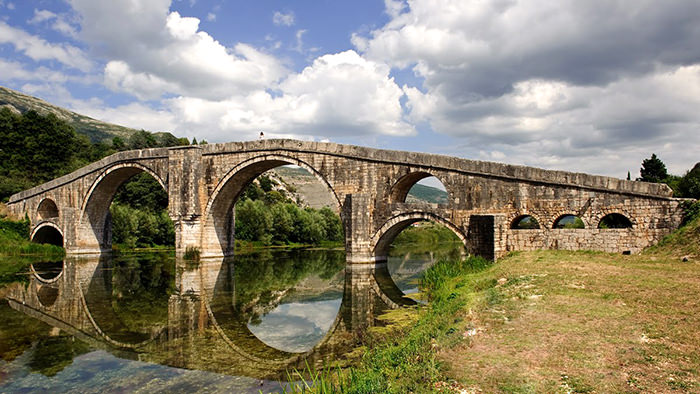 Tip: The bridge is a little outside of town. Just follow the river and you will find it!

There are only three bridges that made it on the UNESCO World Heritage Site list so far, and Mehmed Paša Sokolović Bridge in Visegrad is one of them. 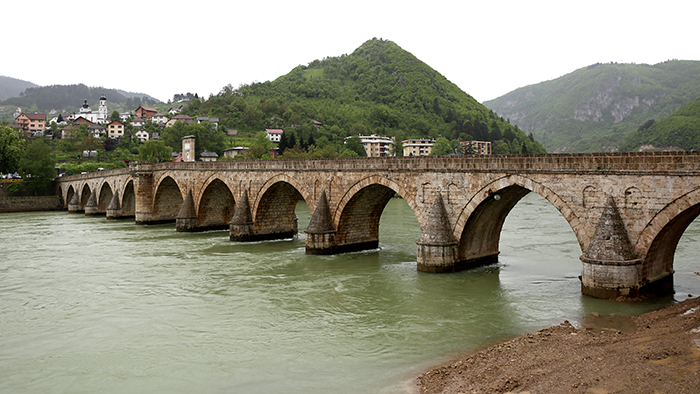 The bridge is one of the best examples of Ottoman architecture and civil engineering. It has a length of 180 meters, 11 arches, and spans over the Drina River. 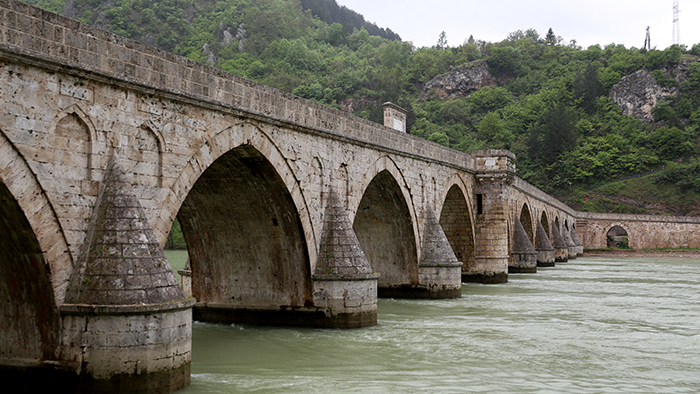 It was built on the order of the Grand Vizier Mehmed Paša Sokolović and was completed in 1577, under the supervision of one of the best Ottoman court architects, Mimar Sinan. The bridge was a muse for Nobel prize winner Ivo Andric, who wrote “The Bridge over the Drina.” 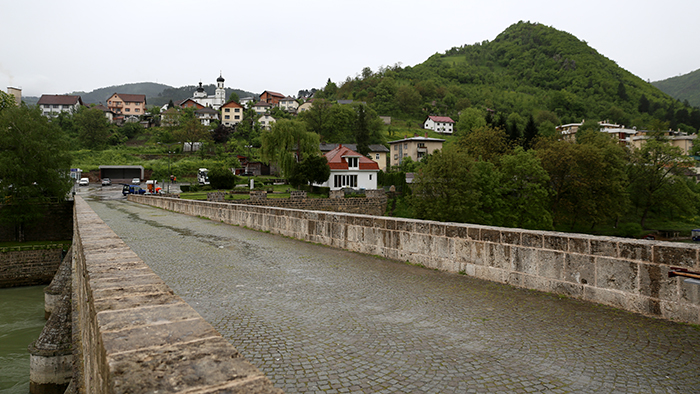 Tip: for great views of the Mehmed Paša Sokolović bridge, go to the cafe on the southern side of the bridge. It has a beautiful large terrace with views over the bridge. The food was pretty good too. WATCH VIDEO 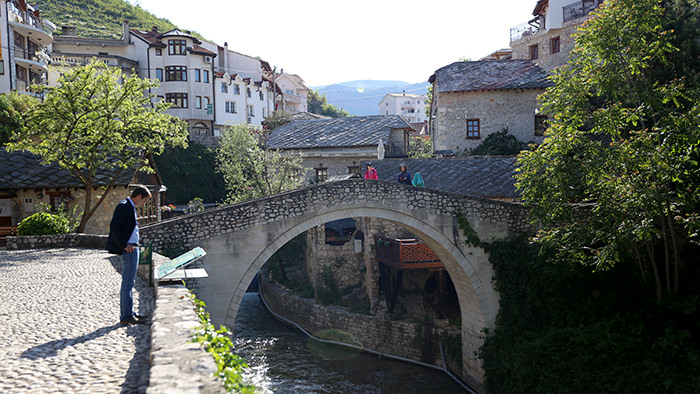 The crooked bridge crosses the Rabobolja creek, a right-bank affluent of the Neretva River. You can easily see it on foot if you are strolling the Old Town. Several restaurants and cafes are nearby. 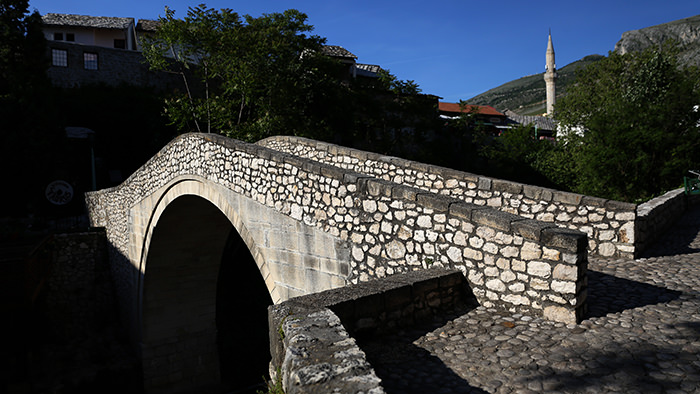 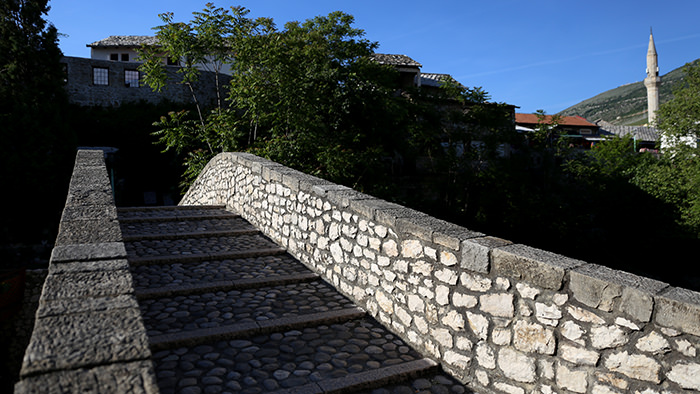 Much of the bridge’s footpath was destroyed by heavy flooding in 2000, but was eventually restored in 2001 thanks to a reconstruction project  financed by the Grand Duchy of Luxembourg. 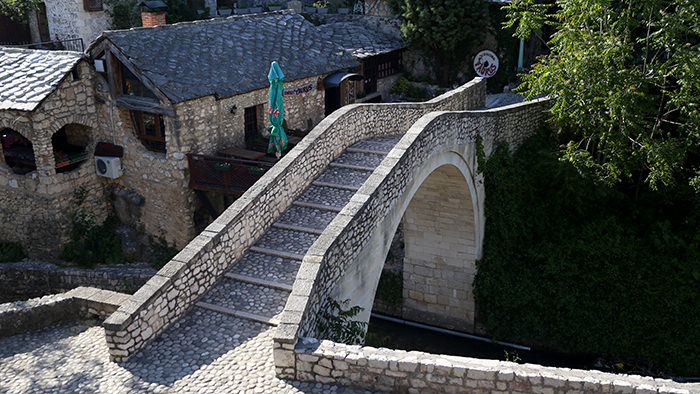 Bosnian architecture has been influenced throughout history by several civilizations which have settled in this unique country over the course of time. A holiday trip to Bosnia will give you an insight into an architectural style that has been molded after influences by Ottoman, Austro-Hungarian and Serbian styles coupled with a unique modern-day identity. To understand the vastness of this unique country, Bosnia packages offered by HolidayMe, will be a good start.

Bosnia tourism will remain incomplete without visiting Stari Most in Mostar, one the country’s most recognizable landmarks. Although Bosnia and Herzegovina has suffered significant damages during the war, it’s home to fascinating architecture and has been developing rapidly over the last two decades after the end of the Bosnian war. There will never be a better time to book a Bosnia holiday package than now, as the country is yet to get all commercialized and touristy.

Have you had the chance to visit any of these Ottoman bridges? Which one did you like most?

Special thanks to XShot, Car Rentals UK, and BH Tourism.