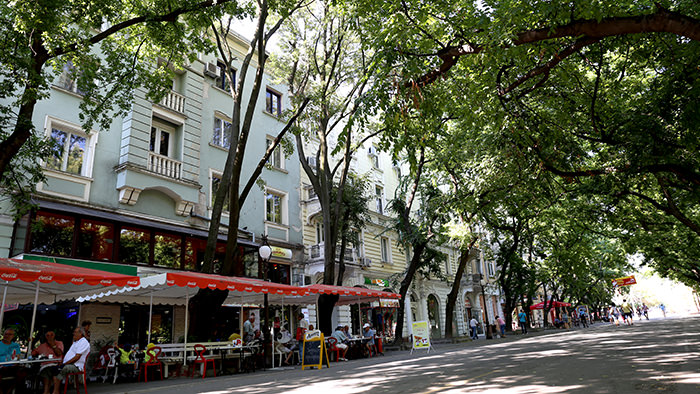 The town of Stara Zagora is nestled at the foot of the Sredna Gora Mountain range in central Bulgaria. With a history spanning over 8,000 years, Stara Zagora is one of Europe’s oldest settlements.

The town is small, but definitely worthy of two or three days dedicated to exploring its prehistorical, Thracian, and Roman roots. Shaded pedestrian walkways, lush surroundings, and a slow pace make Stara Zagora a pleasant stop on any Bulgarian itinerary. 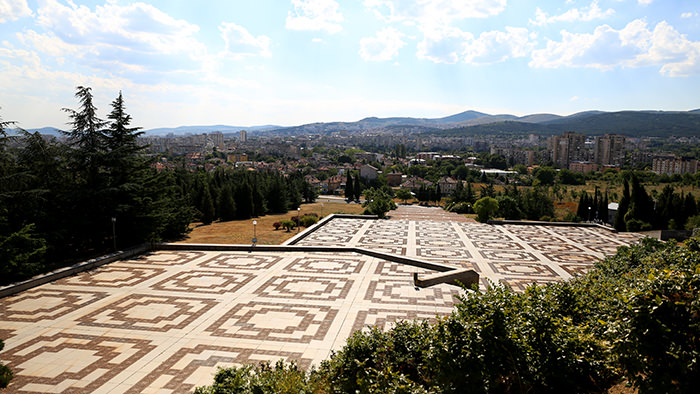 Archaeological evidence suggests that the area was first settled by Neolithic people in the 6th millennium B.C. Their arrival in the Balkans wasn’t by accident. Scientists speculate they were attracted to the fertile soil, multiple rivers, and temperate climate of central Bulgaria. These early Europeans brought with them ceramic skills, livestock, knowledge of agriculture and crops, hunting methods, and a mythical religion. Clues about their daily lives can be found in the pottery, tools, and structures they left behind. Stara Zagora is home to two such Neolithic lodgings, which have been preserved, along with a rich collection of artifacts, in the town’s Neolithic Dwellings Museum. 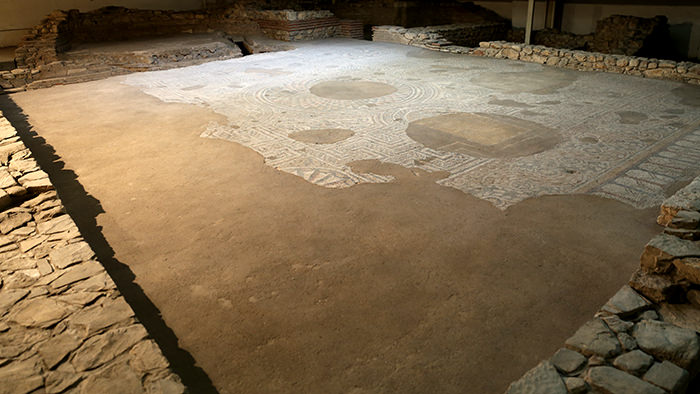 In the beginning of the second century A.D., Emperor Marcus Ulpius Traianus established a city in the Stara Zagora province that he named Augusta Trayana in his honor. It did not take long for it to develop into the second largest city in the Thracian province, second only to Philippopolis (Plovdiv). Eventually Augusta Trayana came under the control of the Byzantine Empire and was renamed Beroe. Between 812 and 1364, control over Stara Zagora alternated between Byzantines and the Bulgarian Empire before finally succumbing to Ottoman Turkish forces in 1364. During Ottoman occupation the city was known as Eski Zagra.

On July 31, 1877 the city was tragically destroyed and its people massacred or enslaved by Turkish forces – an event brought on by the Russian-Turkish Liberation War. On October 5th, 1897 the city finally gained independence. The destroyed city was reconstructed based on designs by Czech architect, Lubor Bayer. With a well-organized street plan, pedestrian zones, and dedicated green spaces, Stara Zagora became the first truly modern city in autonomous Bulgaria. 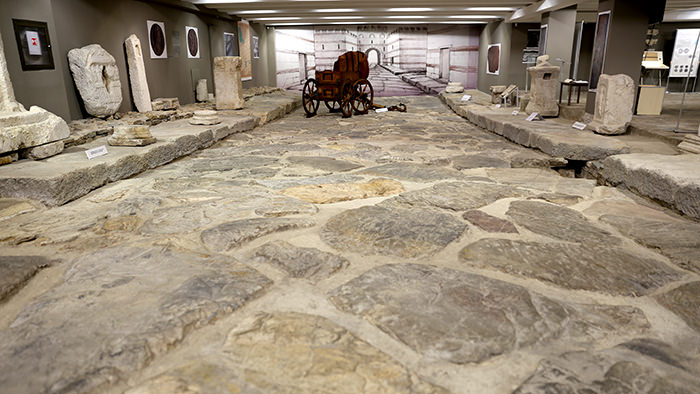 A good place to start your sightseeing tour is at the Regional History Museum (42 Ruski Blvd) in the center of town. This striking four-story building houses a permanent collection of archaeological finds from the Neolithic Age to the 19th century. It was constructed over the original Cardo Maximus of Augusta Trayana, which now comprises part of the impressive Roman exhibit on the basement level. The street, which ran from the southern to the northern gate of the city, was exposed and purposely left in situ as part of the exhibit. 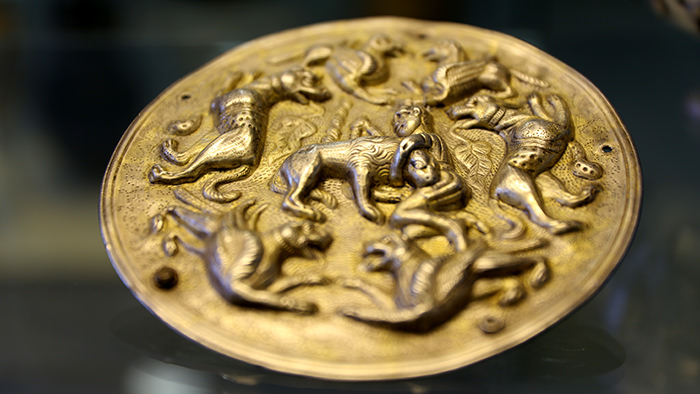 Other items on display include Roman lamps, coins, jewels, and stone carvings. The other exhibition halls are dedicated to the Middle Ages, Ottoman occupation, Bulgarian National Revival, and Bulgaria’s liberation. The museum is open Tuesday through Sunday (closed Mondays) 10 a.m. to 6 p.m. Admission is 5 BGN. Guided foreign language tours are available for 20 BGN. 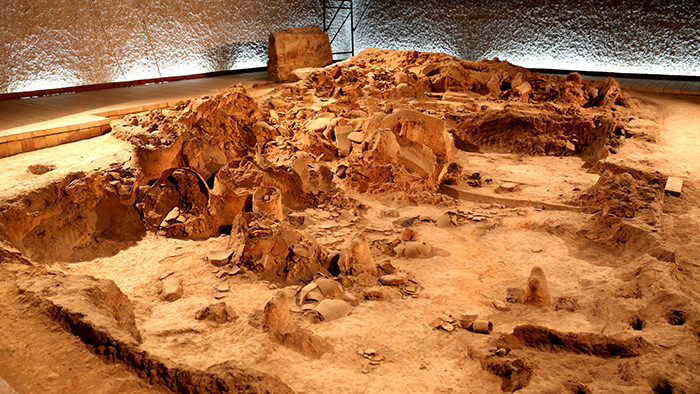 The Neolithic Dwellings Museum (20 Armeyska Street) is a short drive from the center of town. This unassuming building houses one of mankind’s most significant findings. Inside a dim temperature controlled room are the remains of two Neolithic dwellings dating back to the 6th millennium B.C. What initially looks like a pile of rubble is actually a pair of single-room homes constructed entirely of wood, clay and straw. In and around the dwellings are broken ceramic vessels and other household objects, which provide clues about how Europe’s first inhabitants lived. Tool fragments, grains, and pieces of household utensils demonstrate their ingenuity in farming and cooking. 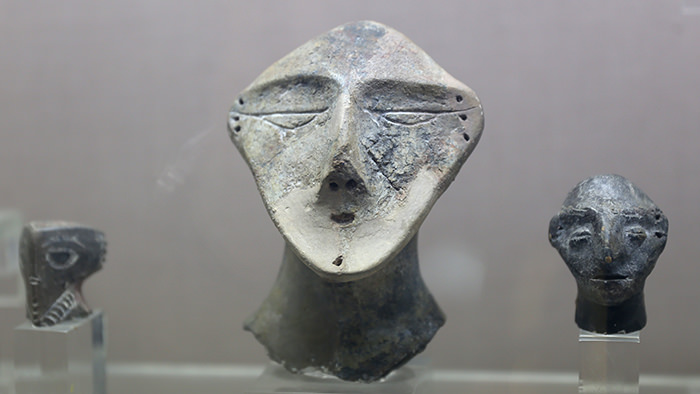 The museum also displays several artifacts excavated at other Neolithic settlements around the Stara Zagora region. Copper farming tools, hunting gear and cutlery carved out of bone, pottery, marble figurines, and ceramic children’s toys are just some of the incredible items on display. The museum is open Tuesday through Saturday (closed Sundays and Mondays) 9 a.m. to 12 p.m. and 12:30 p.m. to 5:30 p.m. Admission is 5 BGN. Guided foreign language tours are available for 20 BGN. 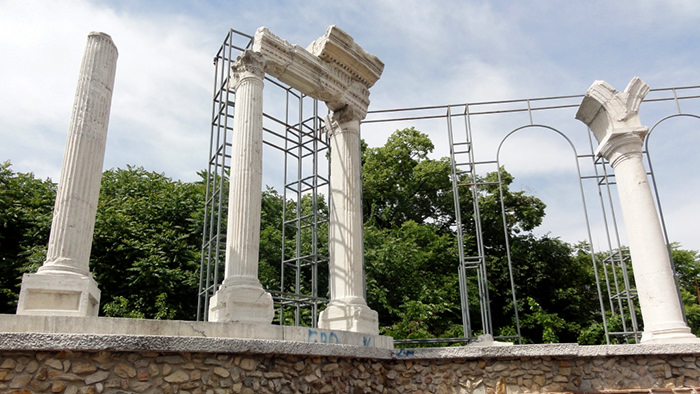 No proper Roman city existed without a Forum; an open public square dedicated to economic, religious, and political matters. A Forum served as the marketplace and assembly point for Roman cities. The Roman Forum of Augusta Trayana is located in the center of town next to the courthouse on Mitropolit M. Kusev Blvd. The complex contains the remains of the city walls, western gate, and a 1,300-spectator amphitheater used for public assemblies, celebrations, and gladiatorial battles. The amphitheater is still in use for ballet performances, festivals, and opera concerts. Admission is free, however visitors must first obtain permission from the Regional History Museum to enter. The Forum is open 10 a.m. to 6 p.m. Guided foreign language tours are available for 20 BGN. 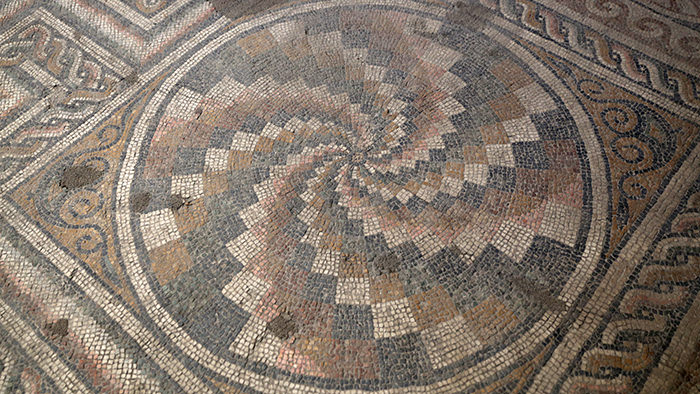 If you’re craving more Roman history, pay a visit to the post office on Sv. Knyaz Boris to check out the mosaics that were uncovered on the basement level. Art historians agree that the mosaics belonged to a Roman public hall that was constructed sometime between the 4th and 6th centuries A.D. The mosaic designs represent the circle of life and the four seasons. Guided tours are available upon request +359 42 919 214 (a private tour is not necessary to have a look). The post office is open Monday through Friday 8:30 a.m. to 12:00 p.m. and 12:30 p.m. to 5 p.m. 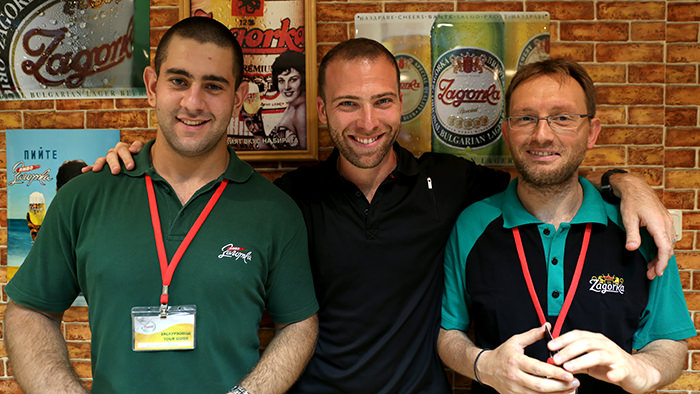 You don’t have to spend much time in Bulgaria to see that Zagorka is one of the country’s most popular brews. Since 1958, Stara Zagora has been home to the Zagorka Brewery. Visitors can now tour the brewery and learn about the beer-making process, as well as some of the history behind the brew. The tour begins with a history lesson, then moves on through every stage of production, including the fermentation and maturing areas. The final stop on the tour is the taste-testing room where visitors will get the opportunity to sample the different Zagorka products. All tours are guided and are only held Fridays, Saturdays, and Sundays from 12 p.m. to 6 p.m. Price per person is 6 BGN, which includes guided tour, beer sampling, and a parting gift. Book your tour ahead of time by calling 0800 11 330. 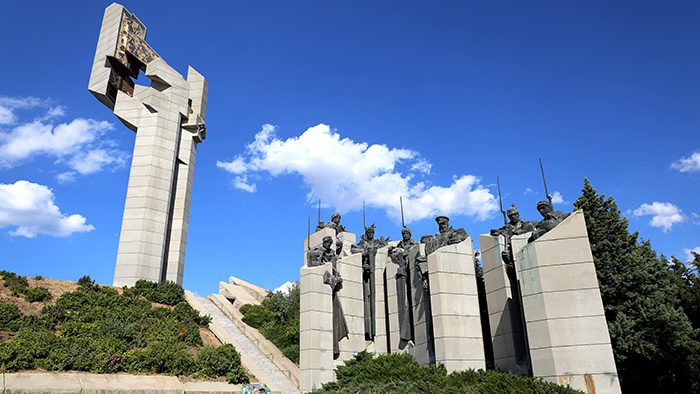 A five-minute drive from the center of town, in Balgarsko Opalchenie Park, is the Defenders of Stara Zagora 1877 Memorial Complex dedicated to those who fought against the Ottoman Turks during the bloody battle of July 31, 1877. The memorial was erected in 1977 to pay homage to the Bulgarian volunteers and Russian soldiers who took part in the effort to liberate Bulgaria from Ottoman control. One hundred steps lead up to the 50-meter-high concrete structure meant to represent a waving banner. The original banner was given by the Russian city of Samara to the people of Stara Zagora, but was destroyed in the massacre. Beneath the concrete banner are statues of five Bulgarian volunteers and a Russian officer. An eternal flame burns nearby. From here you’ll also get great views of Stara Zagora. 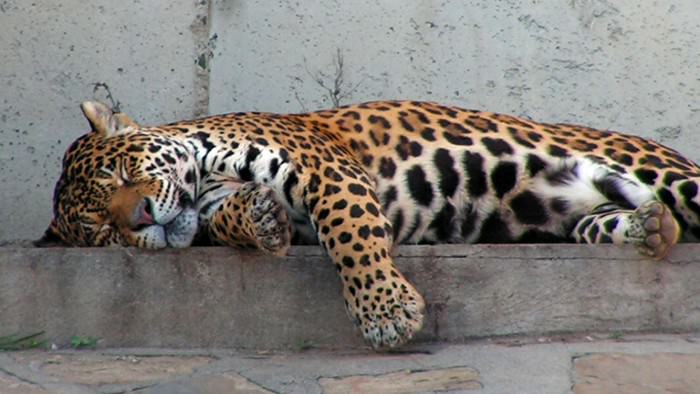 During the city’s reconstruction in the late 19th century, several areas of the city were made into public parks. The largest of these is Ayazmoto Park; 240,000 square meters of shaded walkways, manicured gardens, open-air theatre, sports complex, and zoo. The park contains over 150 exotic plants, as well as fountains and benches. The Stara Zagora Zoo is home to over 80 species of animals from around the world. It is open seven days a week from 8:30 a.m. to 5 p.m. Admission is 2 BGN. 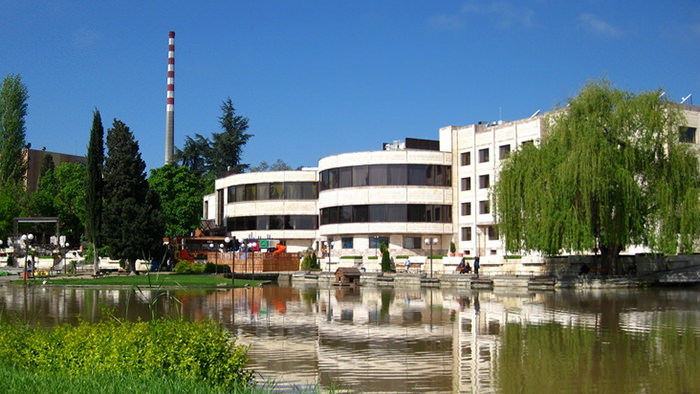 If you love parks, then you will also enjoy strolling around the beautiful 5th October Park in the city centre. There is also Bedechka Park with tranquil river running through it. Thrakia Park and Zhiten Alan Park are also favorites among the citizens of Stara Zagora. 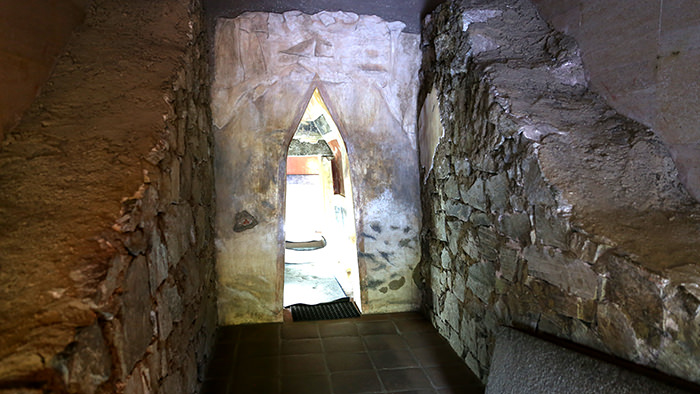 The Thracian Tomb of Kazanlak in the town of Kazanlak is a popular day trip from Stara Zagora, especially since it takes less than an hour to reach by car. The tomb forms part of a larger ancient Thracian necropolis dating back to the 4th century B.C. The tomb’s extraordinary murals and unique beehive construction have earned it a place on the UNESCO World Heritage List since 1979. 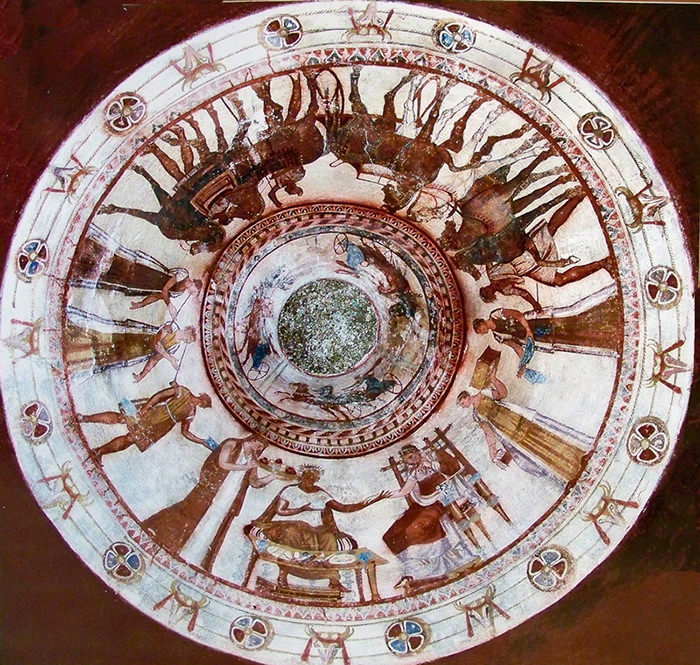 The mural depicts a banquet in which a man and a woman are affectionately grasping each other’s wrists in a gesture of farewell. Other figures in the mural include horses, musicians, and guests presenting gifts to the couple at the banquet. Along with human remains, several ritualistic objects and ceramic vessels were found in the tomb. Many of these are on display at the site. Unfortunately, it is not possible to visit the original tomb without prior written permission from the Bulgarian Ministry of Culture. It is possible, however, to visit an exact replica of the tomb situated just steps away. Admission to the original is 20 BGN for a maximum number of four people for 2-3 minutes. Admission to the replica is 3 BGN. The tomb is open every day 9 a.m. to 5 p.m. 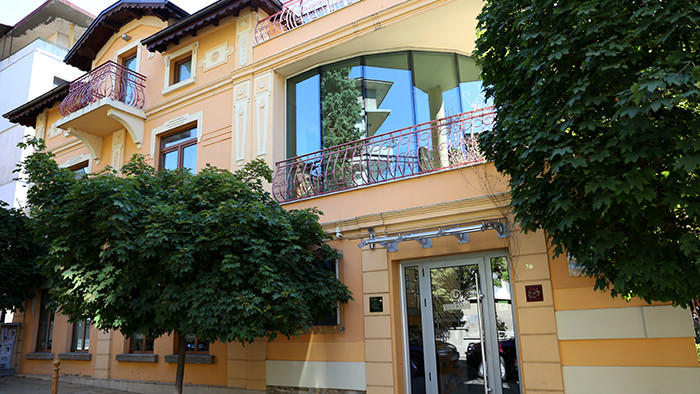 A hotel in the city center is the best option for staying in Stara Zagora. Hotel Uniqato is a three-star property located in the heart of town. It offers 16 comfortable guestrooms, each with modern neutral décor and all necessary amenities (air conditioning, television, hairdryer, safe, bathtub, Wi-Fi and toiletries.

The building, which dates back to the turn of the 20th century, was completely renovated to be contemporary and comfortable. Upon entering, guests are greeted at the front desk by a friendly receptionist. Natural light pours in from the extra large windows above the staircase, giving the lobby a light and airy feel. Guests are welcome to enjoy the breezy rooftop terrace and restaurant on the ground floor. Free parking is available in the hotel parking lot. Prices range from 138 BGN for a double room to 240 BGN for an apartment. Overall, Hotel Uniqato is a great value in the perfect location! 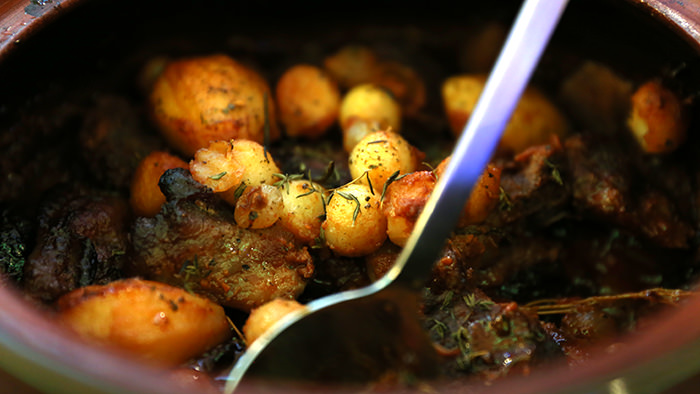 Restaurant Castela shines as one of Stara Zagora’s best dynamic dining venues – ideal for both casual lunches and romantic dinners. The restaurant has two themed indoor dining areas (Viennese, Roman) and an Irish pub-style terrace. The concept for the columns and Roman-inspired decoration derived from the presence of ancient Roman columns discovered beneath the building. The Mediterranean-inspired menu includes zesty salads, homemade pasta, and fine cuts of meat, plus an extensive wine collection of Bulgarian, Balkan, and European varieties. The chic, elegant décor makes it great for a date. The quality of the food is stellar. Average price per plate is 10 – 15 BGN. 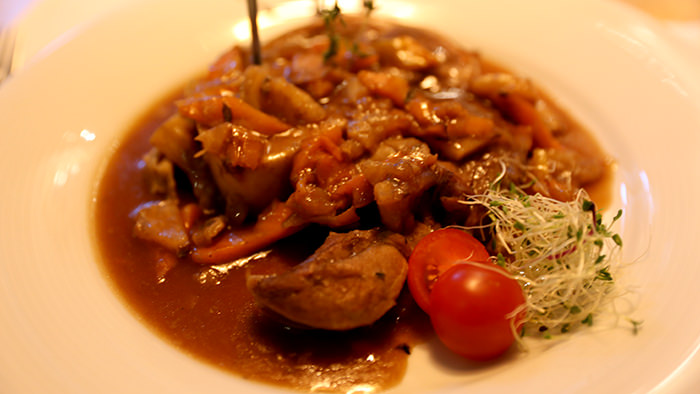 Consistently voted one of the top restaurants on Trip Advisor is Hotel Uniqato’s very own Italian restaurant and pizzeria, Uniqato. Brickwork, fireplaces, and country-style furnishing give this large restaurant a special charm and rustic atmosphere. The menu is simple and straightforward, and consists of barbecued meats, pizza, pastas, and homemade ice cream. All of Uniqato’s pizzas are baked in a wood-burning oven and made with fresh veggies, cheeses, and cold cuts. The vibe is family-friendly and very cozy. Perfect for both chilly and warm weather. Average price per plate is 10 – 15 BGN.

Have you been to Bulgaria? Have any suggestions about what to see and do in Stara Zagora? Leave us a comment below!

5 thoughts on “What to See and Do in Stara Zagora, Bulgaria”