Lugo is a gorgeous city in Galicia, Spain that boasts remarkably intact Roman walls and a mix of modern, Baroque, Romanesque and gothic buildings. If you’re planning on visiting Lugo, there are also some charming surrounding towns to see as well. Here are the best day trips from Lugo, Spain. 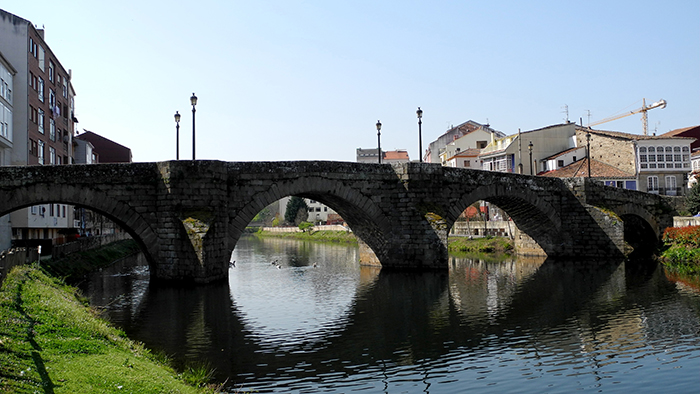 Monforte de Lemos is a small, but interesting city located about an hour and ten-minutes south of Lugo in the heart of Ribeira Sacra wine country. Its roots go way back, before the Romans, to a time when a Celtic tribe known as Lemavos lived in castros (fortified settlements) throughout the area. The Lemavos chose well – too well, in fact. The Romans came and conquered the hill village they called Castro Dactonio. This hill, recognized nowadays as Mount Saint Vincent, or Monte de San Vicente, gradually evolved into the heart of a Medieval city. 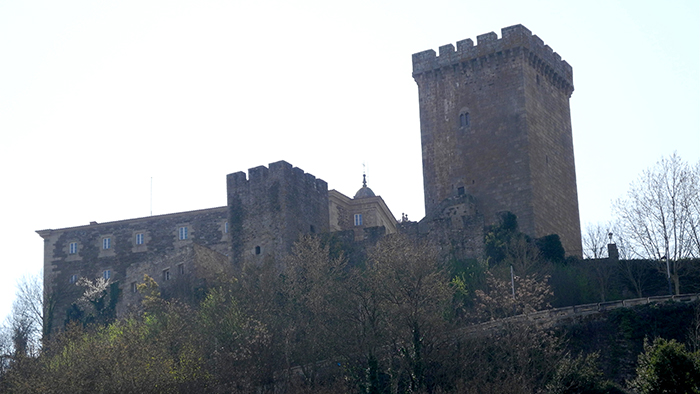 In the 16th century a castle and a convent were erected atop the remains of the old Celtic castro. City walls were constructed to protect the town from invaders. This spawned the name of the town, which comes from the Latin phrase Mons Fortis, meaning “strong hill.” Monforte de Lemos enjoyed centuries of prosperity thanks to its wealthy counts who poured money into public buildings and local commerce. 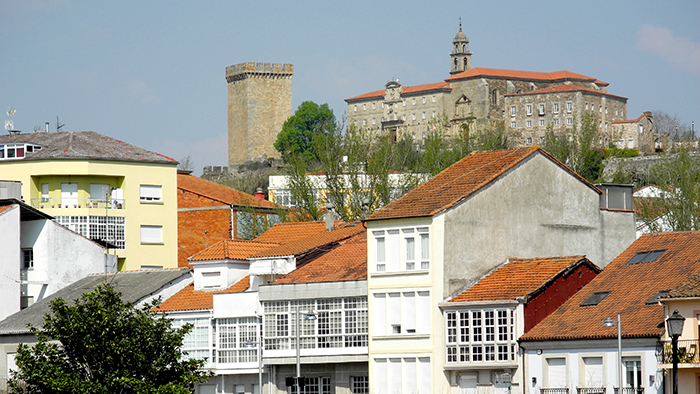 Monforte de Lemos is divided into upper and lower districts. The upper part of the city, which is the Mount Saint Vincent area, is arguably the most beautiful. Here the Torre da Homenaxe, or Homage Tower dominates the landscape. This 98-foot-high structure was built by the Lemos family. For €1 visitors can have access to the top of the tower via the interior staircase. Next door to Homage Tower is a palatial building now being used as a national parador, or government-run luxury hotel. The hotel occupies a space that once served as the Counts’ Palace and the Benedictine Monastery of San Vicente del Pino. 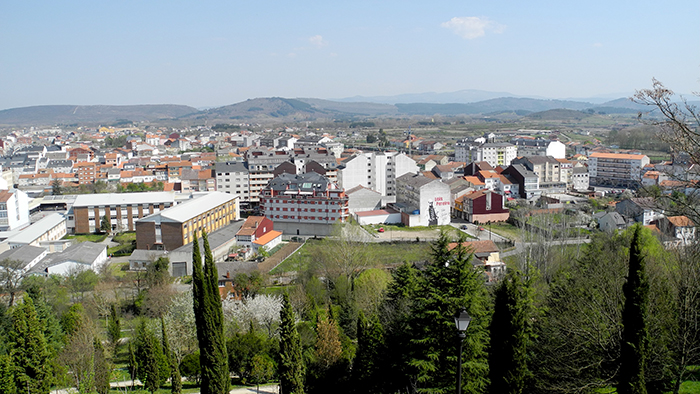 The neighborhoods of the Mount Saint Vincent area used to be the Jewish Quarter. Before being forcibly expelled from Spain in 1492, the Jews of Monforte de Lemos resided on streets like Rúa Zapatería (Shoemaker Street). 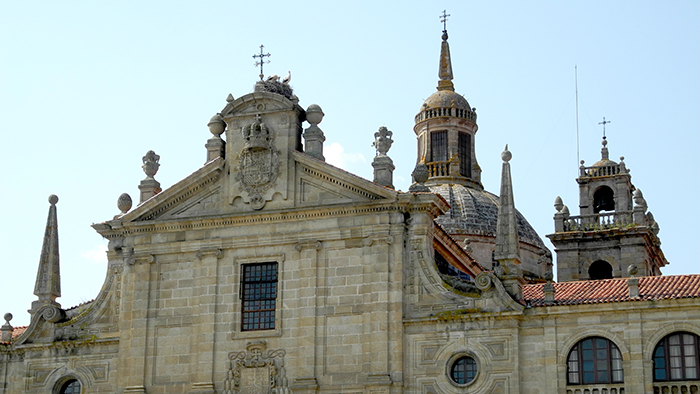 The lower part of Monforte de Lemos, now the city center, is home to one of Galicia’s most iconic monuments, the College of Our Lady of Antigua. Cardinal Rodrigo de Castro founded this impressive complex in 1593. It houses an enormous church and museum containing various paintings, including two works by El Greco. Its renaissance-style exterior and grand presence earned it the nickname El Escorial Gallego (the Galician Escorial). Near the College of Our Lady of Antigua is the local tourism office in Praza da Compañía. 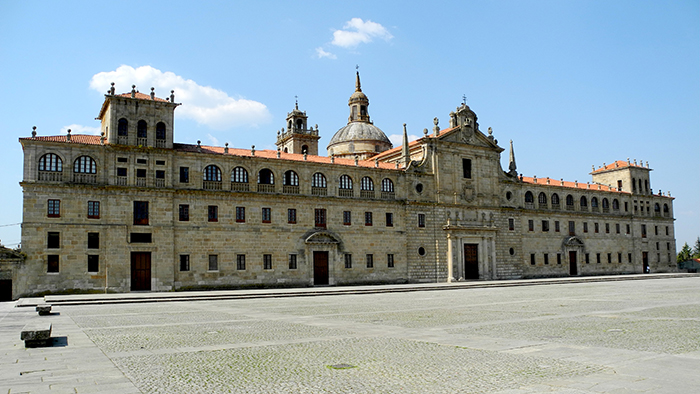 Dedicate an hour or two to explore this historical city. The Mount Saint Vincent area offers up some incredible views of the surrounding landscape. There is also a Roman bridge that crosses over the Cabe River near the Santa Clara Convent. 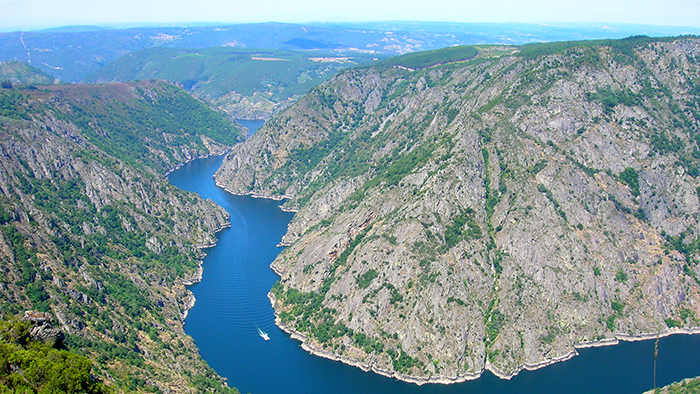 The Ribeira Sacra region of Galicia encompasses a sizeable area in the northern Ourense province and southern Lugo province. Spain’s greatest concentration of monasteries, convents and churches is found here, which is why the region’s name signifies Sacred Riverside. But the Ribeira Sacra is a region also known for its secular pleasures – delectable wines. There are nearly 100 bodegas in the region. Using grapes like the Albariño, Godello, Treixadura and Mencía, winemakers craft award-winning blends with robust flavors that are gradually earning praise around the world. The area has several microclimates, but summers are usually hot and sunny, which is a reason why the vineyards produce so well. 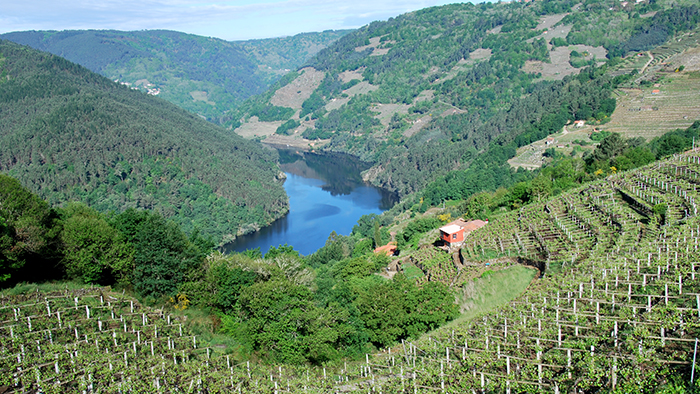 The Ribeira Sacra region has been naturally carved out by the banks of the Miño River and the canyons of the Sil River. Many travelers choose to drive because the area is dotted with quaint villages, impressive monuments and picturesque landscapes. Driving also gives you the freedom to stop at bodegas at your leisure. Another great way to enjoy the scenery is by taking a catamaran river tour. You will see forests, terraced vineyards, riverside villages and experience unforgettable panoramic vistas. Please see the Additional Travel Information section of this guide for more information on catamaran tours. 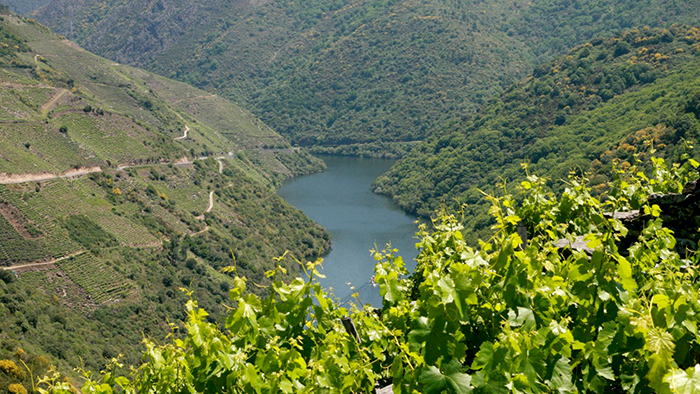 The Ribeira Sacra region merits a minimum of two to three days to explore. Wines produced here are among Europe’s finest. Buying a case of your favorite wine and having it shipped to your home is easy at any bodega. You would be bringing home a treasure from one of Europe’s oldest wine-producing regions. Medieval cities like Monforte de Lemos, Parado do Sil and Quiroga are a testament to the land’s history and prominence during the Middle Ages. Ribeira Sacra is unique and fascinating place, and is not to be missed! 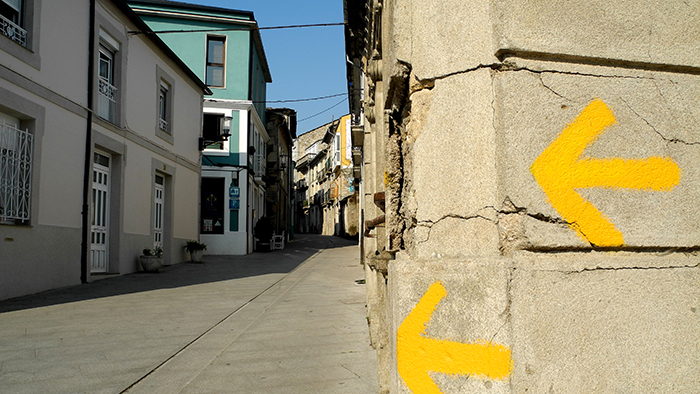 At just a 40-minute drive from Lugo, Sarria is a popular day trip for travelers who wish to explore the Galician countryside and soak up some local culture. Sarria is a mostly industrial town known for its furniture, cement and mineral water industries. Like Monforte de Lemos, Sarria has two distinct sections. The lower part of town has the contemporary buildings while the upper part of town is a throw back to Medieval times. 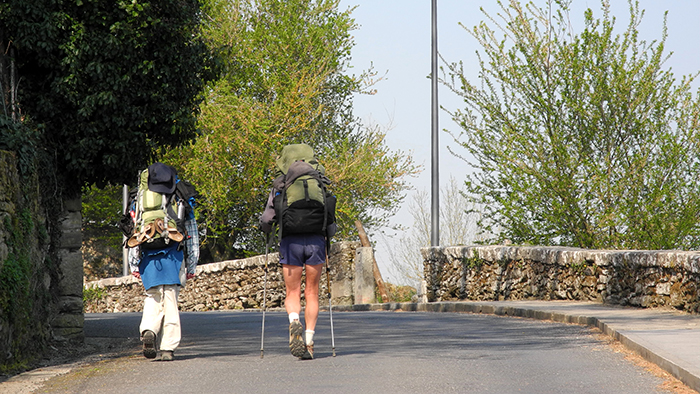 Sarria’s history is closely tied to the Camino De Santiago, or the Walk of St. James (see Camino De Santiago section of this guide for more information). Since the 13th century, thousands of religious pilgrims have stopped in Sarria on their way to Santiago de Compostela, but the most notable of these has to be King Alfonso IX. After a successful win at Mérida against the Moors, King Alfonso IX set out to travel to Santiago de Compostela to give thanks for the victory. He would never reach his destination. King Alfonso IX died in Sarria on September 24, 1230 at the age of 59. 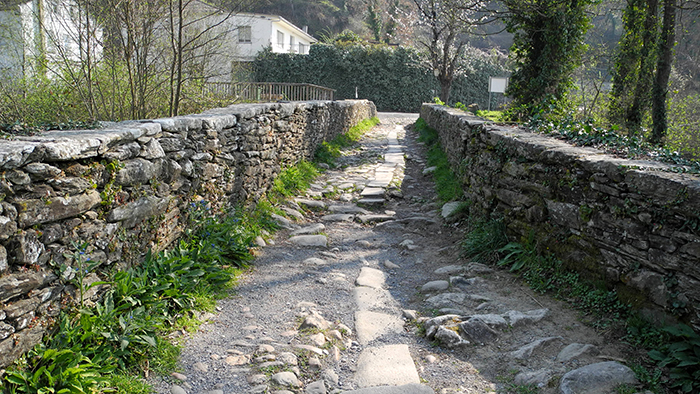 The upper part of Sarria is the historical district. Like most Medieval cities of Europe, Sarria had fortified city walls to protect its core from invasion. Although the walls are not longer standing, there is one watchtower remaining. It is an impressive relic from times past. Nearby is the San Salvador Church, the 16th century San Anton Hospital and the 14th century convent, Convento de los Mercedarios. The main street that runs through upper Sarria is packed with hostels, cafés and small shops. The cobblestone streets and Medieval buildings make it unmistakably authentic. Follow the main street uphill past the convent to the Medieval bridge. Chances are you will see pilgrims crossing the bridge with backpacks and walking sticks in tow. It is amazing to think how many people have traversed it through the centuries. 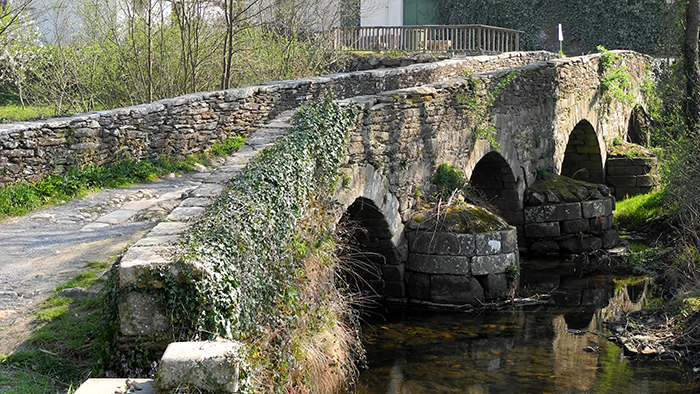 Sarria is a unique opportunity to see history come alive. Although small, it is a bustling town thanks to the constant presence of pilgrims. In just over an hour it is possible to see all of Sarria’s monuments. Do, however, bring comfortable walking shoes since exploring the historical quarter requires walking uphill. 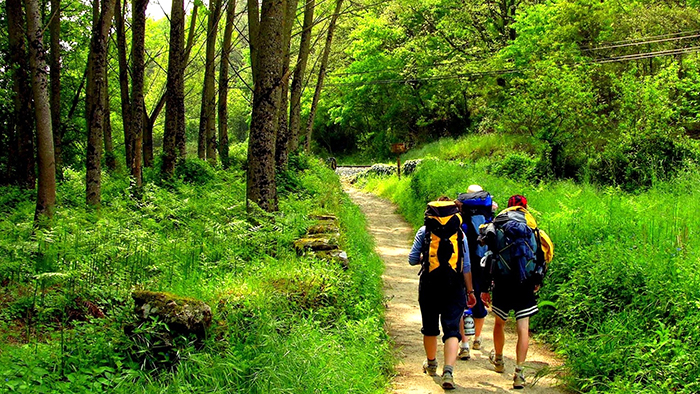 The Camino De Santiago, or the Walk of St. James, is a pilgrimage taken by thousands of Christian devotees each year. Although all pilgrims set out in hopes of reaching the Cathedral in Santiago de Compostela, there are various routes one could take, depending on the starting location. Located just 111 kilometers from Santiago de Compostela, Sarria is a stop on the French Route that begins in St. Jean Pied de Port, France. Other popular routes include the Vía de la Plata, or Silver Route, Portuguese Route and one of the most challenging routes across northern Spain, the Northern Way. 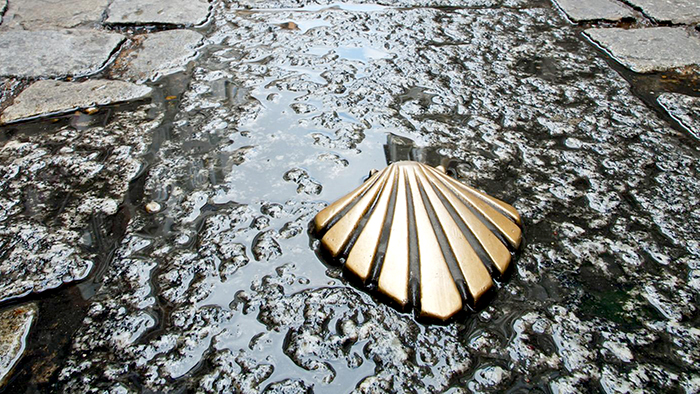 The “way,” or el camino, as it is often referred to, is a testament of faith that demands mental and physical perseverance. The presence of peregrinos, or pilgrims, is a source of immense pride for Galicia. They can be seen trudging through all kinds of weather almost all year long to reach their destination. They not only honor the Christian traditions of Spain, but they are a source of inspiration for all who see them. 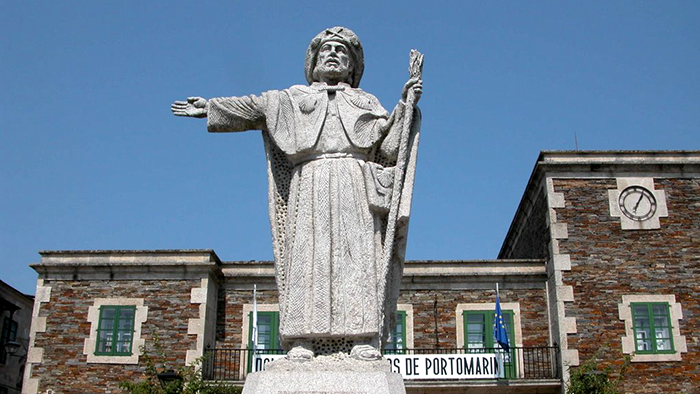 While many choose to walk, others travel along their chosen route by bicycle or horse. Each city along a route is marked with a symbol of a scalloped shell – a longtime representation of the camino. Just as all ridges in a shell converge at a single point, all pilgrims on the camino will come together at Santiago de Compostela.

Have you been to Galicia or to any best day trips from Lugo, Spain? We would love to hear from you! Leave us a question or comment below!