The 10 Indian street food dishes you must eat in Jaipur, India is a diverse collection of extraordinary recipes from the subcontinent that has attracted travelers from around the world for generations. Whether you choose to eat veg (vegetarian), non-veg (meat dishes), or a little of both, your taste buds will be in for a treat, as unique flavor combinations, contrasting textures, and dozens or even hundreds of spices per dish wash over your palette and send you into Indian culinary heaven. 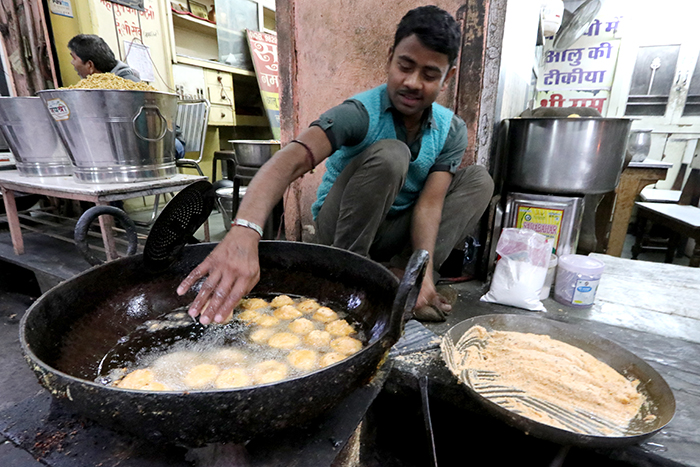 I toured the Rajasthani capital in February of 2018 with my guide and friend Atray from Hungry Walks, in association with Delhi Food Walks. These are the 10 Indian street food dishes you must eat in Jaipur! 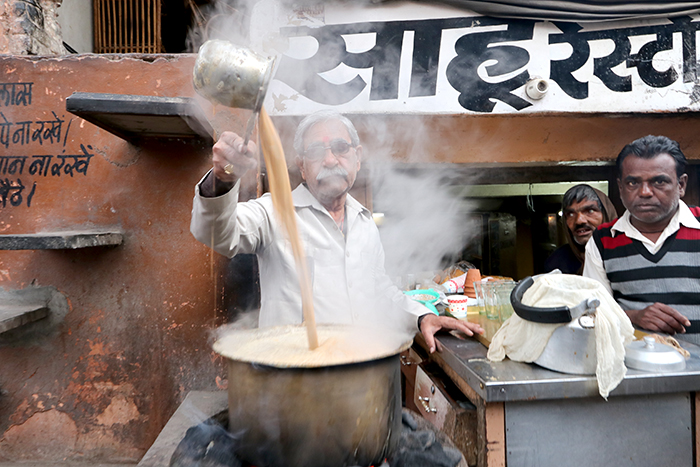 You’ve probably had chai before. But chai in India is very different from the kind that’s served in most cafés and coffee houses in the United States. The Indian variation is a smooth and creamy tea that is loaded with milk and warming spices like ginger, cardamom, and cinnamon.

Check out 10 Things You Must Do in Jaipur, India

For some of Jaipur’s best chai, head over to Sahu Chai Wala, a roadside stall where the chai is boiled over hot coals. It was quite different than other types of chai I tried on my first trip to India and is made with a delicious, secret spice mixture that I couldn’t get enough of. When you come here, be sure to let your chai sit for a few minutes before you take a sip. It’s boiling hot! 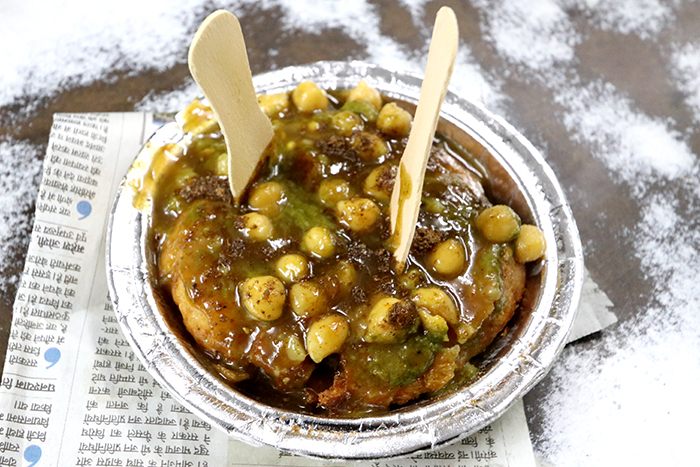 Aloo Tikki is a popular potato dish that’s made of boiled potatoes, peas, and spices that are formed into patties and deep-fried. It is sometimes served with a spicy curry and various chutneys on the side or on bread as a sandwich, but the kind I tried was served with chickpea curry, mint chutney, and tamarind chutney on top. The potato patties were soft but still had a slightly crunchy exterior from being lightly deep-fried. The chutneys added minty and sweet flavors that paired nicely, and there was also a bit of heat, but it wasn’t overpowering in any way. 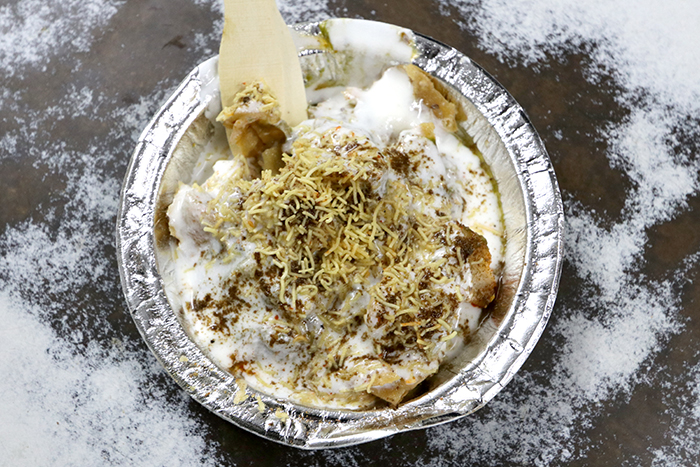 A popular snack on the Indian subcontinent, especially northern India, Pakistan, and Bangladesh, is papdi chaat, a traditional fast food that is made by topping fried wafers made of wheat flour and ghee, chickpeas, and boiled potatoes with yogurt, tamarind chutney, chaat masala, and sev. It makes for a delicious and refreshing snack with a really nice crunch that you have to try the next time you’re in Jaipur! 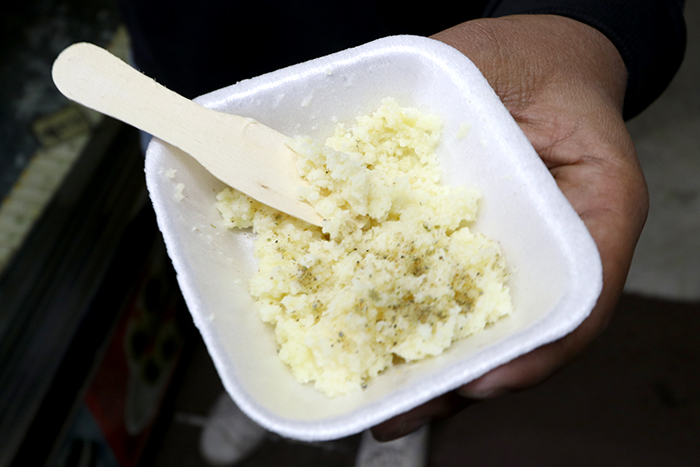 Mishri Mawa is a sweet Rajasthani dish that consists of milk that has been boiled until it thickens. Sugar, a type of clarified butter called ghee, and cardamom are then added, and the mixture is cooked for another five to ten minutes and taken off the flame. Mishri (more commonly known in the West as rock candy or sugar candy), almonds, and pistachios are then added to the milk mixture and combined until it becomes a grainy milk pudding. It’s sweet and rich, and the cardamom flavor is very prominent. I really enjoyed it! It’s definitely one of the Indian street food dishes you must eat in Jaipur! 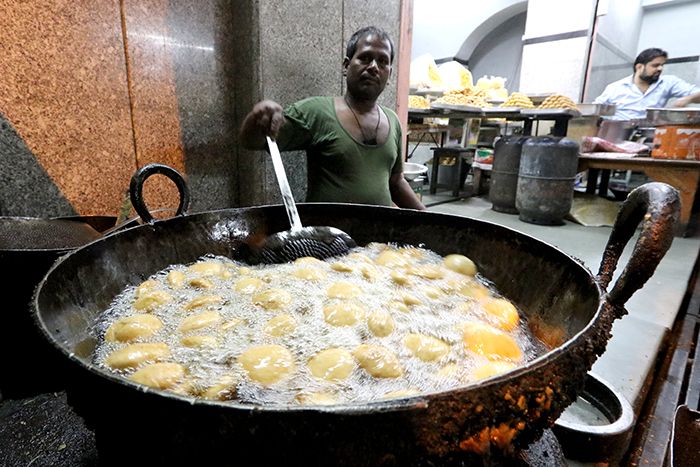 The next Indian street food dish you must eat in Jaipur is kachori, which is a small, round, fried pastry that is made of fine flour and filled with dal. This dish can vary from state to state and can be found in other parts of India with slightly different ingredients.

Check out 35 Indian Street Food Dishes You Must Try in Delhi, India

In its supposed birthplace, the state of Uttar Pradesh, it is made with yellow mung or Urad dal, while sweet versions can be found in the city of Jodhpur. The kind I had on the streets of Jaipur was essentially a crispy dal fritter that was served with a chutney and a yogurt-like curd that was absolutely heavenly! I highly recommend it! 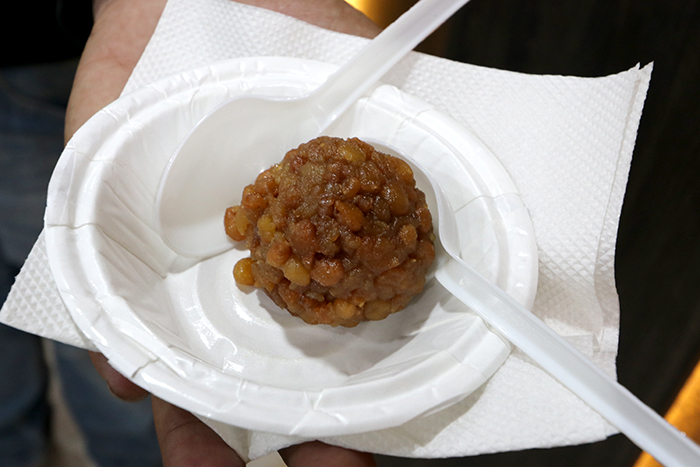 India is known for having some of the richest and most unique sweets on the planet, and laddu, another sweet you can find on the streets of Jaipur, is no exception. This sweet is made of a flour dough (chickpea, wheat, and coconut flour can be used), milk, and sugar rolled into a small ball about the size of a donut hole and fried in ghee. Some variations include dried nuts or raisins. They’re sometimes served at festive or religious events. It looks crunchy, but is actually quite soft and is coated in a sugary syrup. It reminded me a lot of a glazed donut! If you like donuts or donut holes, you’ll love laddu dhoodh! 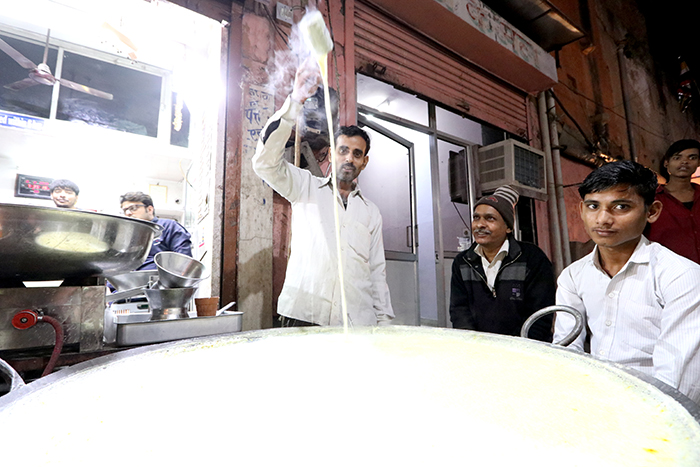 Don’t be alarmed if you happen to see someone tossing a creamy mixture back and forth between two pots while you’re exploring the streets of Jaipur. Most likely, you’re watching someone prepare kadhai ka doodh, a thickened, condensed milk that is made with sugar and dried fruit and can contain a variety of spices, including cardamom, saffron, cinnamon, nutmeg, and cloves.

Check out 5 Things to See and Do in Agra, India

It’s a fun dish to watch be prepared, and the people who make it seem to enjoy showing off their technique to tourists. The drink itself is like a hot version of lassi, my personal favorite drink in India. I was told by my guide, Atray, that the flavor gets better the later in the day it gets, so get out at night and try some Kadhai Ka Doodh, easily one of the Indian street food dishes you must eat in Jaipur! 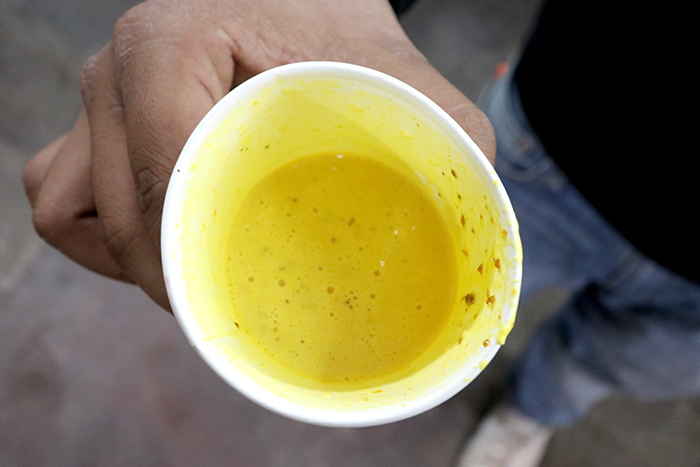 The next dish you absolutely have to try in Jaipur is another milky drink, called thandai. Unlike the kadhai ka doodh, the thandai is served cold and can be made several different ways. Common ingredients in different varieties of thandai include almonds, fennel seeds, cardamom, saffron, watermelon kernels, rose petals, rose essence, pistachios, and even cannabis! The thandai I had contained lots of dried fruit, cardamom, and black pepper, and was like a really flavorful smoothie. The flavors in it almost reminded me of paan! 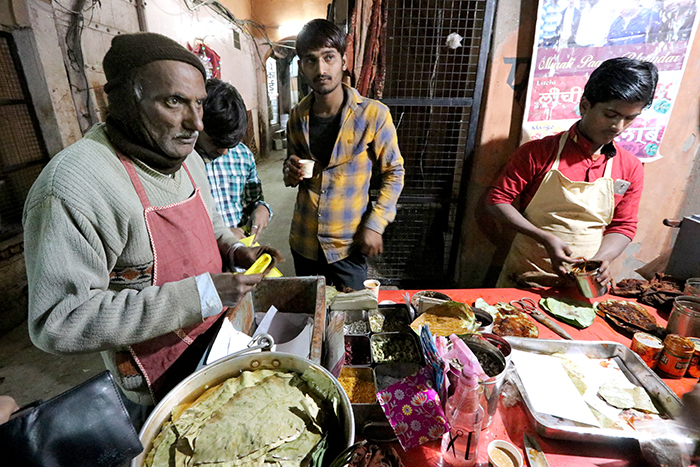 Speaking of paan, this street food that is often used as a palette cleanser, breath freshener, digestive aid, stimulant, and psychoactive is next on my list of the Indian street food dishes you must eat in Jaipur. This dish, which can consist of betel nut, dried fruit, mint, and even chocolate that’s tightly wrapped in a betel leaf, has many variations (including a famous, flaming version) and is popular throughout southern and southeast Asia.

Check out Things to See and Eat in Lucknow, India

It’s a bit of an acquired taste and can either be swallowed or spat out. The kind I tried gave me a lot of energy, but has one prominent side effect: chewing the mixture turns your tongue and saliva bright red, so it’s a bit of a spectacle as well! 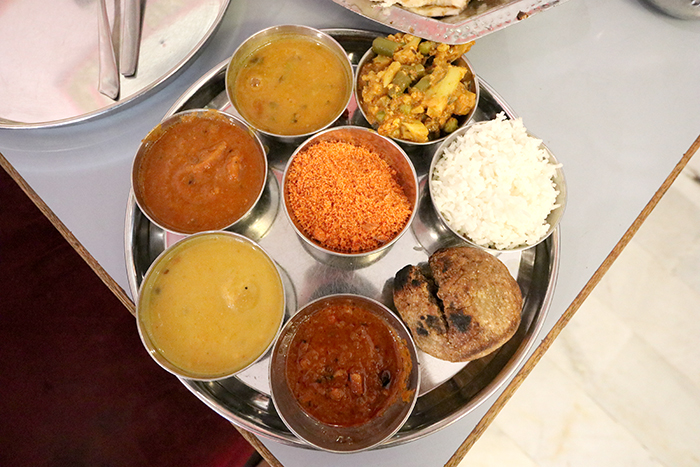 One dish that can vary greatly from location to location in India is the thali, which is a large platter of various dishes accompanied by bread, rice, or both. One of the most unique variations in the country is the Rajasthani thali, which is a culinary essential for anyone visiting Jaipur. For this incredible Indian street food dish you must eat in Jaipur, I highly recommend making a stop at Torba Rooftop Café, which is where my friend Karan took me on my first day in the city. Their Rajasthani thali consisted of a large ball of bread that my waiter crumbled on my plate, which he then mixed with various curries, vegetables, and yogurts. The result was an omelet-like mixture that was extremely light on heat but didn’t skimp on flavor. It was fantastic with the roti that came with it and was so different from any other thali I had during my six weeks in India in 2018. 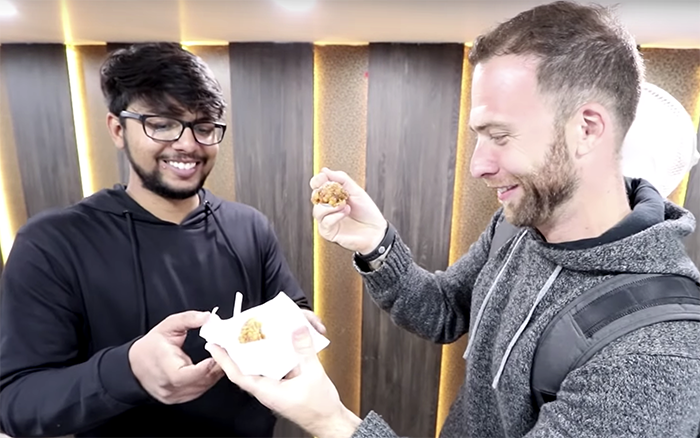 These are just ten of the most delicious Indian street food dishes you must eat in Jaipur. I had a blast exploring this city and those ten dishes are just the tip of the iceberg. The food is so unique to this part of the country and contained so many mouthwatering spices that they kept my taste buds on a wild ride from the moment I arrived in this incredible city. The next time you find yourself on a trip to India, be sure to set at least a couple of days to the side to explore the stunning flavors of the Rajasthani capital, the Pink City of Jaipur. I guarantee it will be a gastronomical experience you will never forget!

One thought on “10 Indian Street Food Dishes You Must Eat in Jaipur, India”