Located in Thailand’s most northernmost province, close to the borders of Laos and Myanmar, is the historic city of Chiang Rai. The things to do in Chiang Rai are decidedly much more low-key than the numerous attractions in the bustling, chaotic, and cosmopolitan streets of Bangkok 530 miles to its south, but are equally as fascinating. 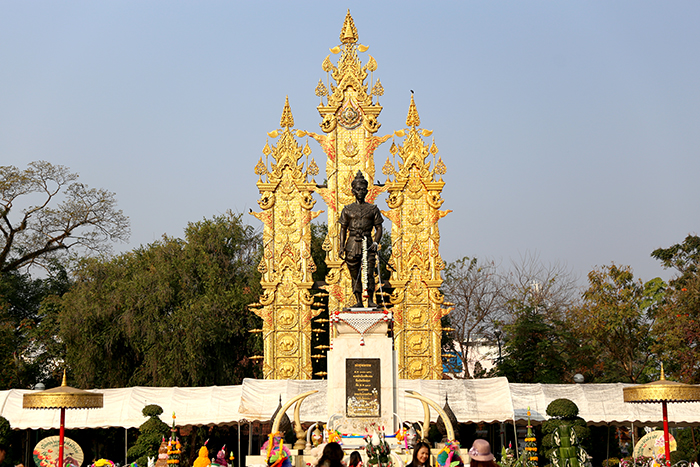 While Chiang Rai may lack the electric energy, pulsing nightlife, and seedy underbelly of Bangkok that has attracted visitors to the Thai capital for decades, Chiang Rai’s long and fascinating history, hundreds of years of rich tradition, and stunning religious sites make it rife with cultural experiences that lie off the beaten path. You just have to know where to find them. These are the 5 things to do in Chiang Rai, Thailand. 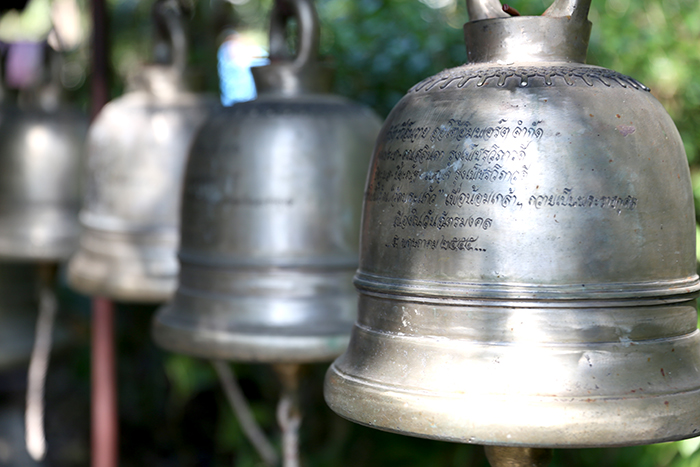 Not to be confused with the massive temple of the same name in the city of Bangkok, Chiang Rai’s Wat Phra Kaew is well-known as the original home of the famed Emerald Buddha, a 26-inch-high figurine of a meditating Buddha that is made of jade or jasper and clothed in gold. The figurine, hidden in the temple by the king of Chiang Rai in 1390, stayed there until a lightning bolt hit the temple in 1434, exposing the Emerald Buddha. 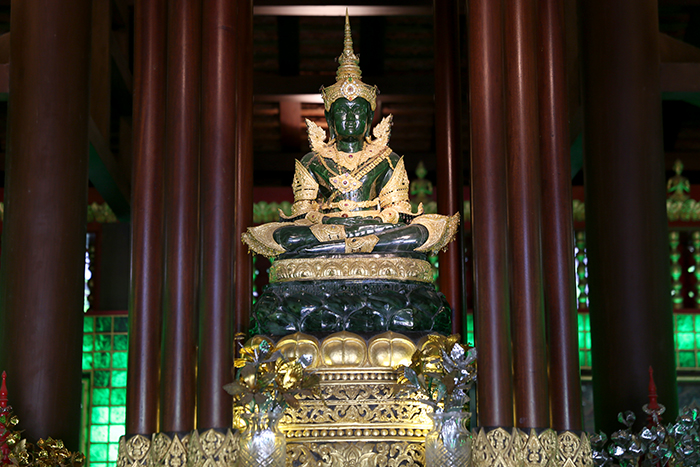 For the next 300 years, the figurine, which is said to be so important that the safety of the Kingdom of Thailand depends on it, traveled around Thailand and Laos before coming to rest at its current home, Bangkok’s Grand Palace, in 1778. But never fear, a replica of the Emerald Buddha can still be found at Wat Phra Kaew today.  A collection of religious artwork and secular items can also be viewed in the temple’s museum, making Wat Phra Kaew one of the best things to do in Chiang Rai! 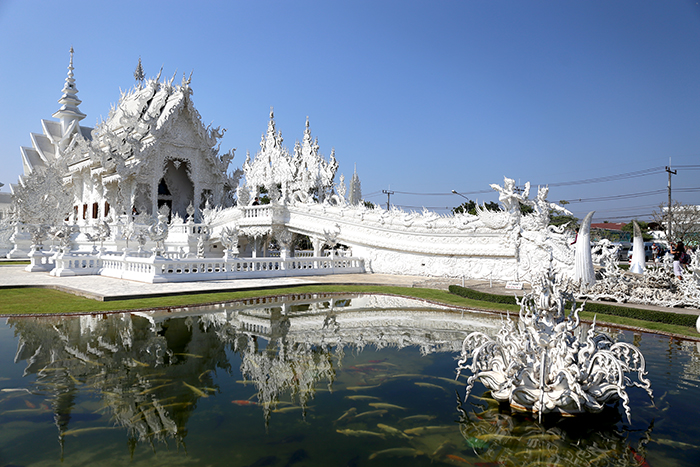 Just 20 minutes south of Chiang Rai is the ornate architectural marvel known as Wat Rong Khun, or the White Temple. Unlike other Buddhist temples in Thailand, which are gold, Wat Rong Khun is bright white. Located on the site of a temple that had fallen into a state of disrepair by the late 20th century, the current temple opened to the public in 1997. What makes Wat Rong Khun unique is that it doesn’t share the architectural style of other Buddhist temples in the country, which was a conscious choice by the man who built and conceptualized it, Thai artist Ajarn Chalermchai Kositpipat.

Check out the Top 10 Things to See and Do in Bangkok, Thailand 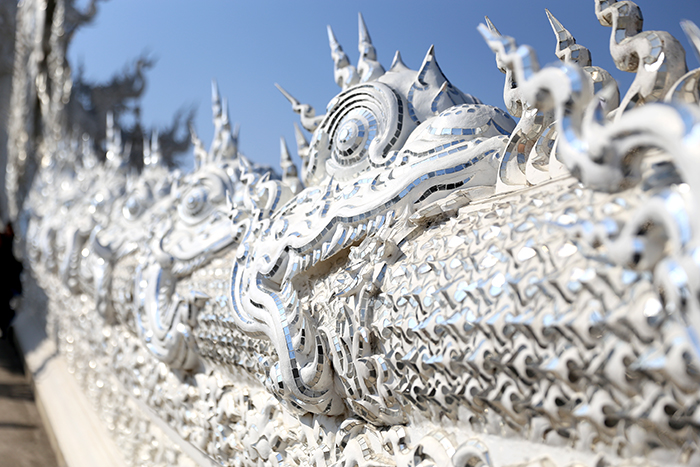 Kositpipat chose the color white instead of the traditional gold to symbolize the Buddha’s pure nature. His use of mirror fragments in the temple’s mosaics are meant to represent wisdom, and make Wat Rong Khun as much of a unique and thought-provoking piece of art as it is an offering to Lord Buddha, as well as one of the top things to do in Chiang Rai. 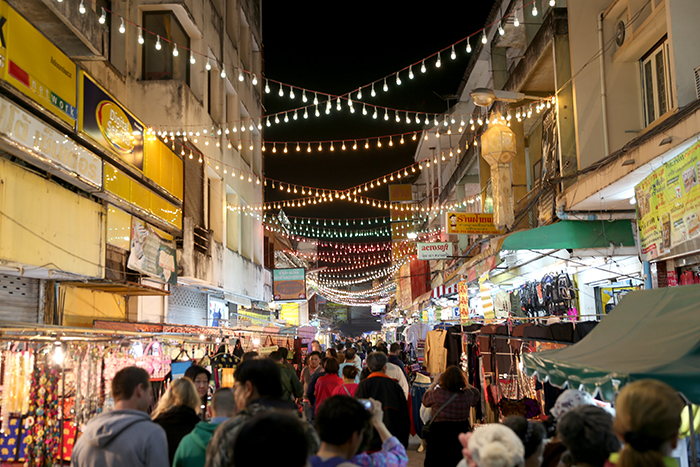 Though Chiang Rai’s Night Bazaar may seem like a smaller version of the night bazaar in the city of Chiang Mai to the southwest, this collection of street vendors, who sell a wide range of items including DVDs, clothes, jewelry, and souvenirs, has a key difference: the Chiang Rai night bazaar vendors include people from local tribes, who set up shop to sell their goods. 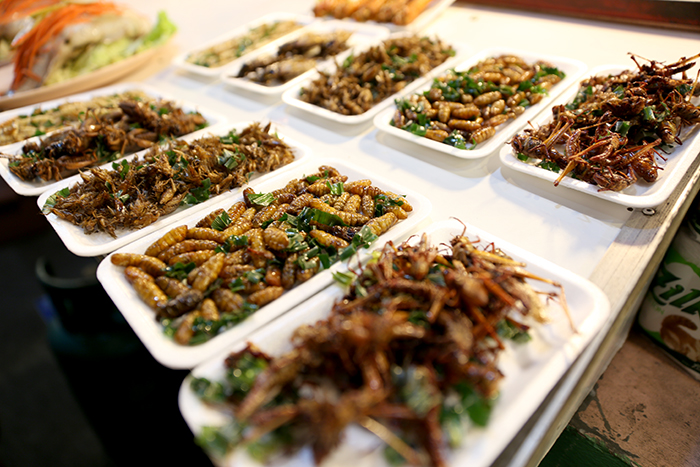 In addition to being able to purchase just about anything your heart desires at the bazaar, it’s also a fantastic place to have an authentic Thai meal. You can choose to eat at the bazaar’s fine dining market, or fill your belly for a fraction of the price at the bazaar food court. If you have an adventurous streak like me, don’t miss out on the chance to try the bazaar’s most unusual culinary delight: fried insects. They taste like French fries! After your meal, finish off your night by further immersing yourself in the Thai culture by enjoying a live music and dance performance! 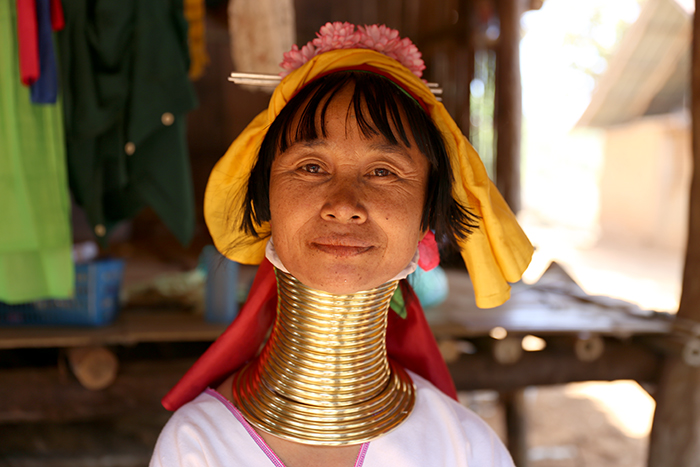 Thailand’s Hill Tribe is a blanket term that comprises several different local ethnic groups that call the mountainous northern and western regions of the country home. These groups, most of whom are subsistence farmers and migratory people who now live in villages after being displaced by the Thai government. 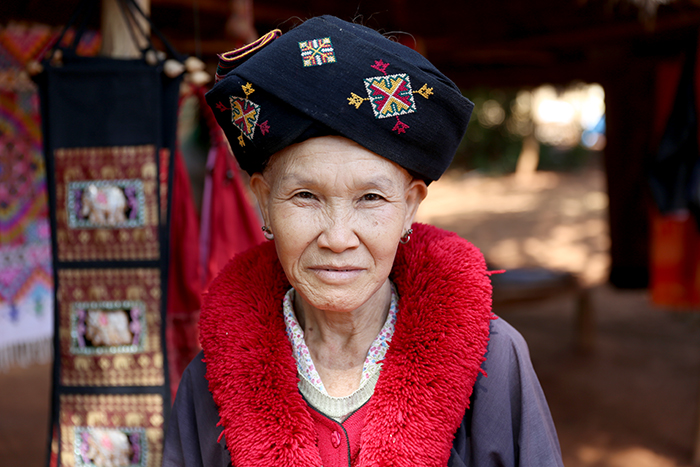 If you take a 25-minute car ride north of Chiang Rai, you’ll come across the Hill Tribe Villages, where for 300 baht, you can walk along a 1.5-kilometer trail that winds its way through five tribal villages, including the village of the famed Kayan Long Neck Hill Tribe, where the female villagers elongate their necks by wearing brass rings around their throats and eventually adding more over time. 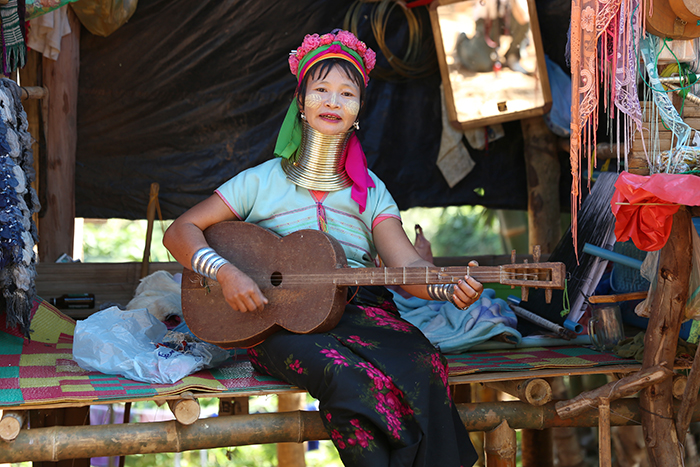 This walking tour gives visitors the remarkable opportunity to meet villagers and witness their traditions first-hand. This is one of the best things to do in Chiang Rai for anyone looking to take part in an incredible cultural experience. 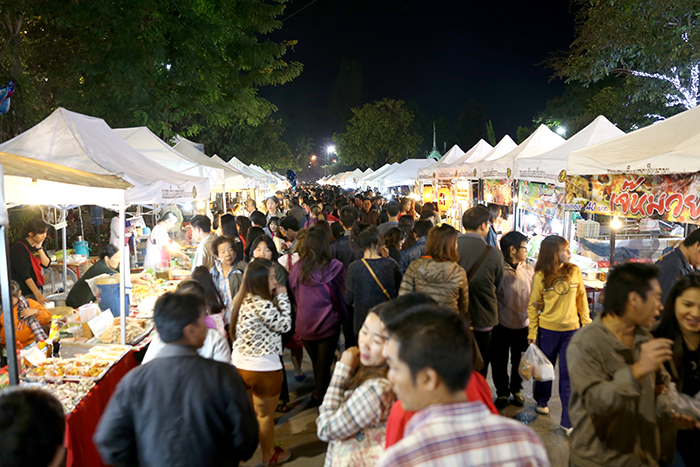 Check out 15 Places You Must See in Thailand 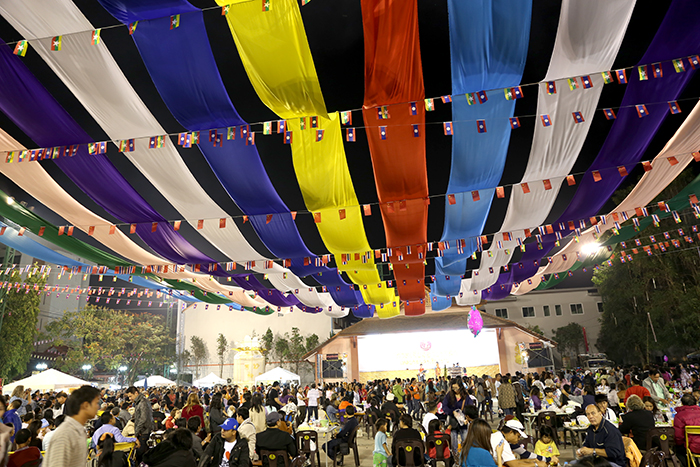 Food is also plentiful here. Be prepared to browse the market’s food stalls for a while in order to figure out what you want, because there are tons of options, including more fried insects, dim sum, fruity juices, satay, pastries, and kebabs. If dining while standing up as a flurry of Thai culture whirls around you strikes your fancy as it does mine, this is one market, and thing to do in Chiang Rai, that you can’t miss. 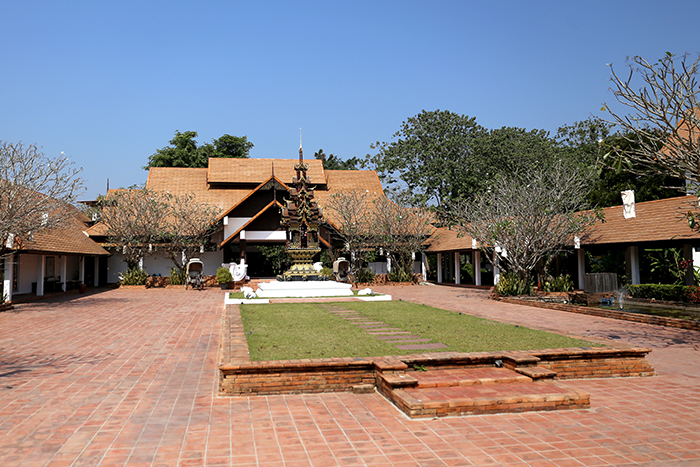 In-between all of your Chiang Rai adventures, you’ll need a comfortable place to keep your things and lay your head at night, and there is no place in the area offering more beautiful or luxurious accommodations than the Legend Chiang Rai Boutique River Spa Resort, a tropical paradise that boasts 78 clean and luxurious studios and family-sized villas, beautiful northern Thai architecture, a world-class spa with indoor and outdoor facilities, gorgeous local artwork, a private pool and garden, a gym, free WiFi, and much more, right in the heart of nature on the banks of the Mekong River. 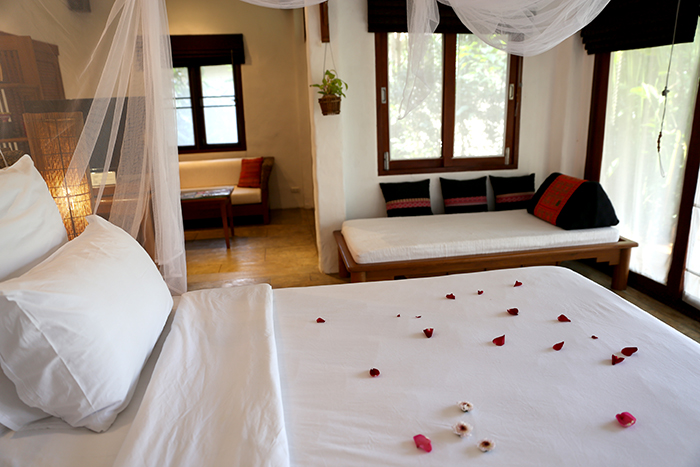 Just a two-minute drive from the city center of Chiang Rai, the resort’s property also offers a panoramic view of the surrounding hills and mountains. Their Sala Rimnam restaurant offers a mouthwatering selection of local and international dishes, while Wine Casa is a superb Italian restaurant that makes sensational food from the boot-shaped country, including authentic pizza, which you can have with a variety of wines from around the world. 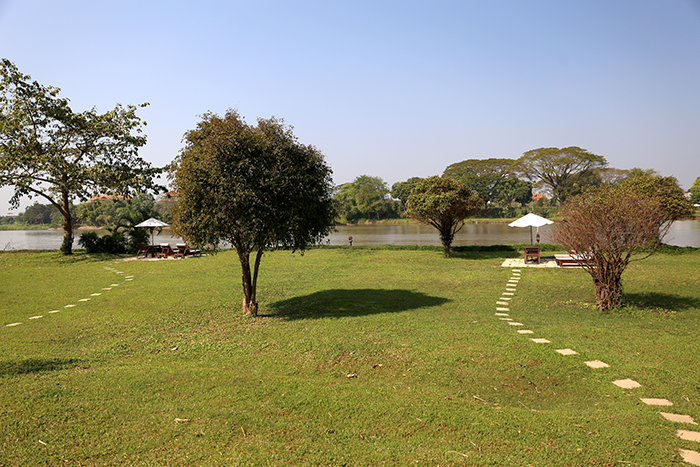 If you’re looking to visit the city’s many night bazaars, be sure to take advantage of the resort’s shuttle service, which transports guests to the bazaars and back for a small fee. Staying here is one of the best things to do in Chiang Rai, and with its beautiful and relaxing setting, it’s one your mind and body will thank you for. 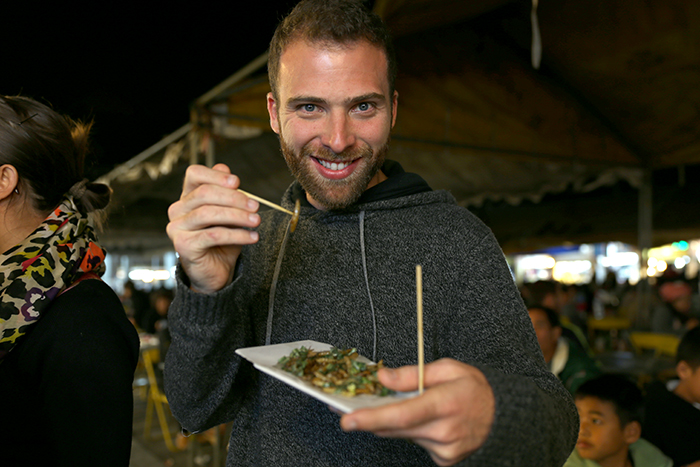 The stunning Thai city of Chiang Rai may not boast the same glitz, and magnetic pull as the national capital to the south, but in many ways, this smaller, more laid-back city in the country’s northern hills and mountains still has it all: exciting markets, luxury boutique resorts, captivating cultural experiences, breathtaking temples, and much, much more. Don’t allow the opportunity to visit this Thai gem slip through your fingers. Book a trip to Chiang Rai today to experience the very best that it has to offer. You’ll be glad you did!