After arriving in the town of Galibi, Suriname the previous day, I woke up bright and early the next morning to have a quick breakfast, head out with my boy Imro to go on a Galibi town tour, and have some delicious smoked catfish! Come along with me as my epic Surinamese adventures continue! 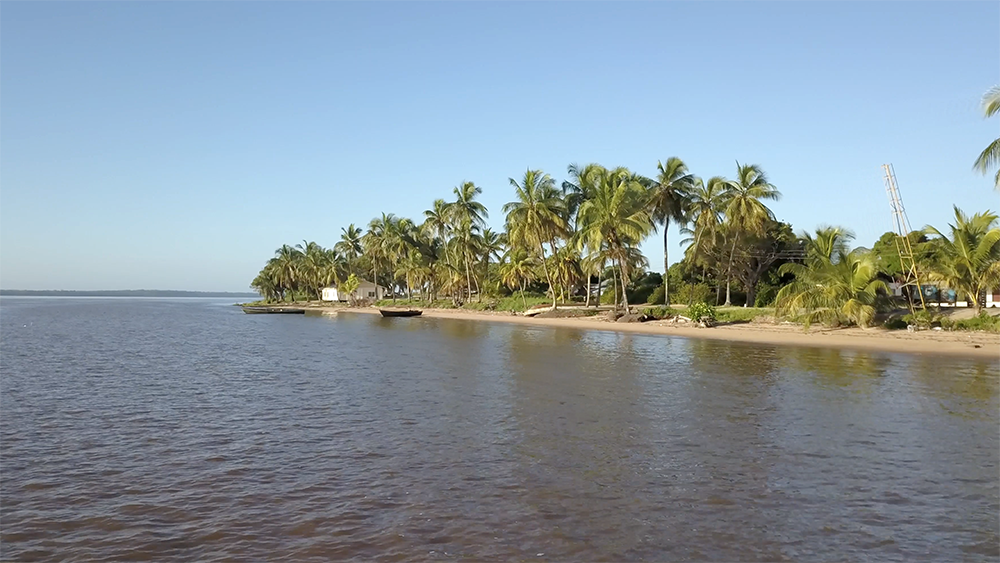 Galibi is the northeastern-most town in Suriname and is right on the border with French Guiana. I started my morning at the guest house dining hall, where I was enjoying a breakfast of eggs, spicy and salty fish, and a pancake. I also had a strong coffee! 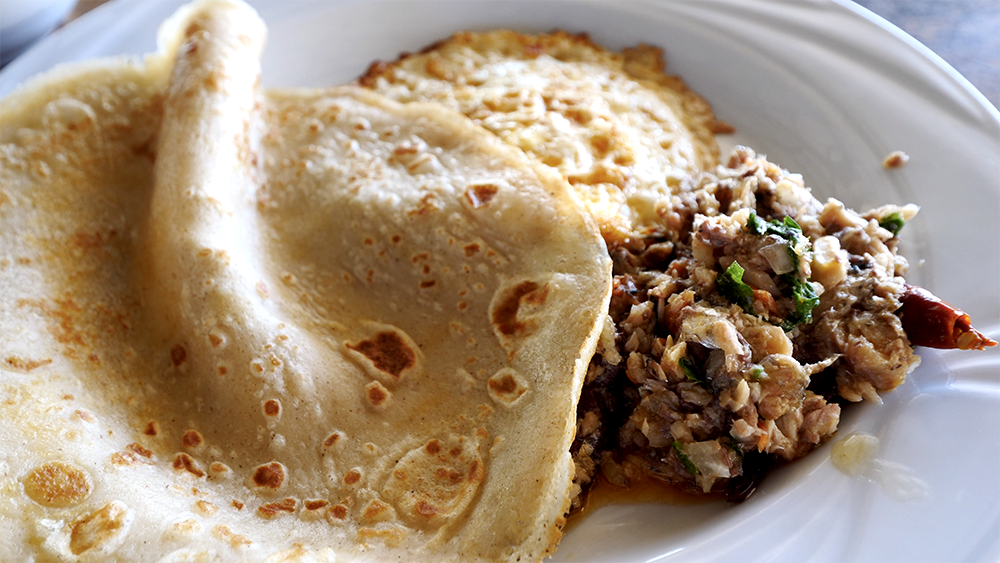 The fish wasn’t too spicy, but it was super salty! The fish mash had onions and chilies in it. Because Suriname used to be ruled by the Dutch, pancakes are eaten there. I put all of my fish into the pancake to see how it would taste. It was amazing! The pancake was a super thin crepe, and the fish went with it so well! The combination of the two was juicy and phenomenal and had my mouth watering. It was so good I got another one! The spice was my favorite thing about it!

Then I met up with my friend Imro from Jenny Tours to begin my Galibi town tour. This was his village. He took me to a gift shop, where I found a cool leopard stool for $110 USD. There were also necklaces, turtle-shaped figurines, pottery, bracelets, and more crafts from the area! I wanted to buy the leopard stool, but it would be way too big for me to carry with me, let alone get on a plane with. I bought a hollowed-out calabash fruit with a turtle carved into it instead. 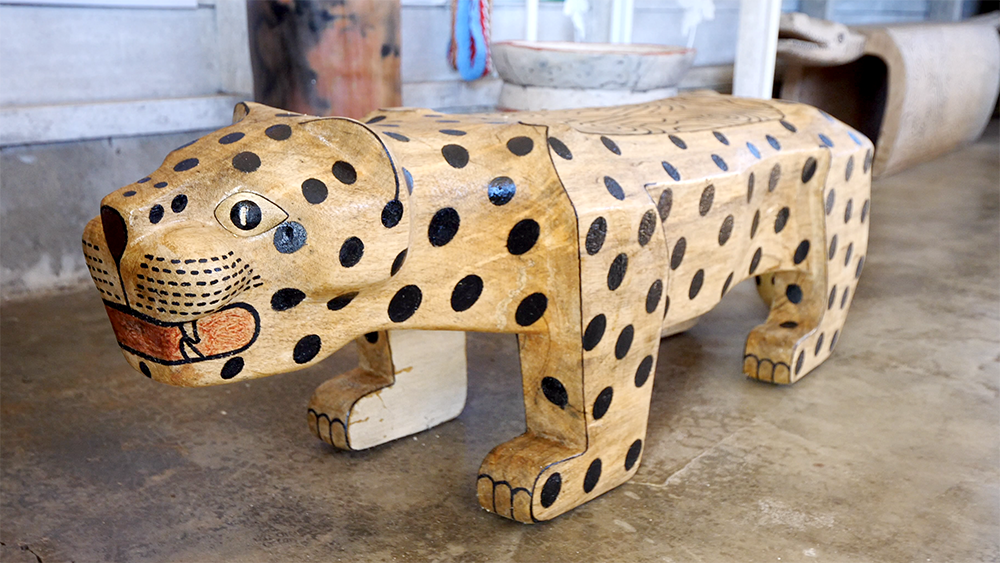 We headed back out. There were lots of mango trees. I tried one – it was more citrusy than the ones in Florida! Then we found a calabash tree and palm trees. Imro also showed me a huge, 500-meter fishing net that was being made by a fisherman. 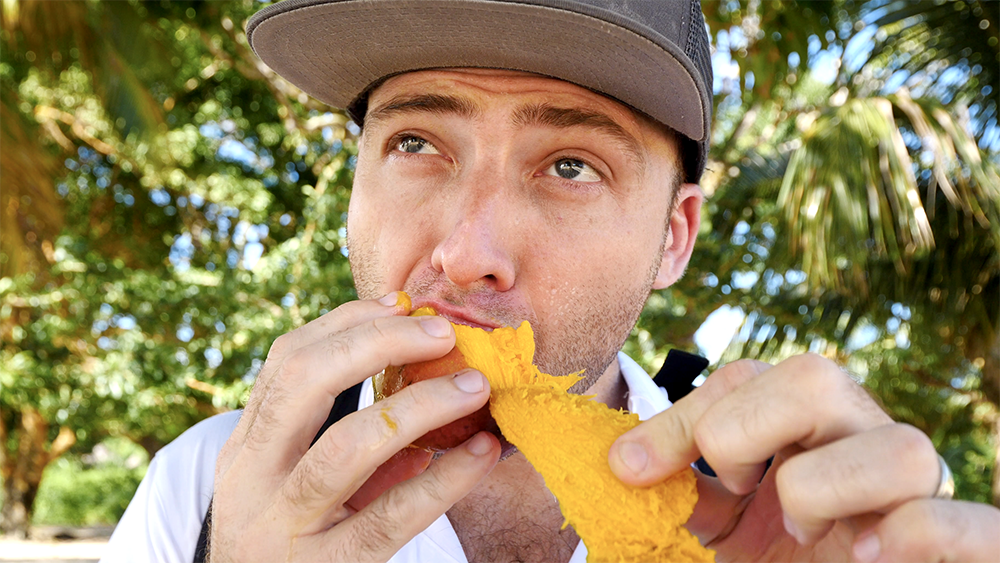 I was getting hungry, so I was ready to eat again! We stopped to try some cashew fruit, which was super sour. 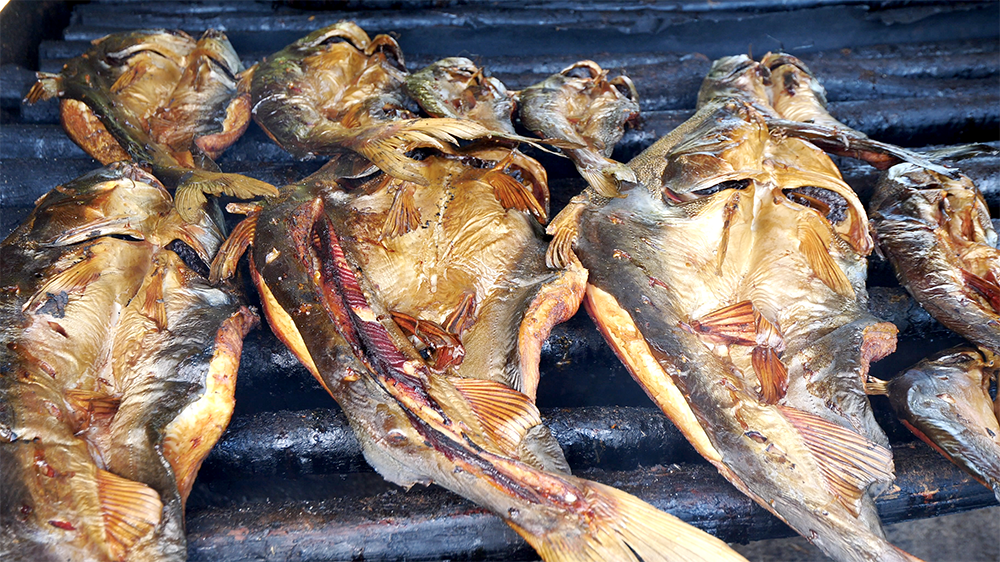 I crossed a wooden plank to get to the dried fish. There were some fish already cooking in the smoker. It costs a little under $5 USD for one fish. We tried it with some casaba bread, salt, and peppers. It had a very smoky flavor and was really good, despite the spines! I had to be really careful of them because I didn’t want to get one stuck in my throat! The peppers were the best part. They gave it a nice, intense kick! I love village food. It doesn’t get any more authentic than this.

To continue my Galibi town tour, we headed over to the local primary school, but first, we came across the same tarantula in the tree from the previous night. 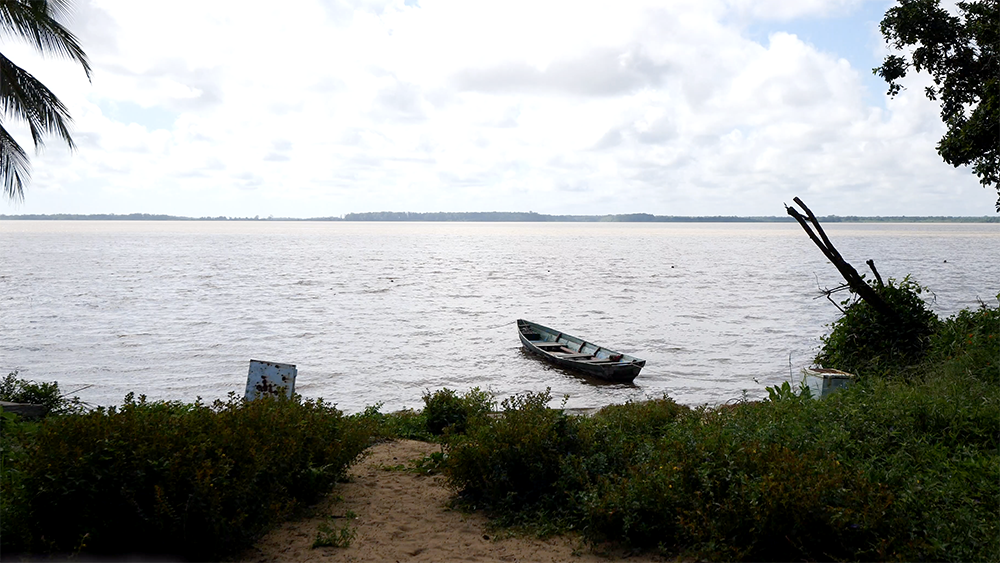 The downtown area of Galibi consisted of 5 or 6 houses, a church, and a school. Only 800 people live there. There’s a soccer field, a banquet hall, and lots of small houses. School was in session at Sint Antonius School! 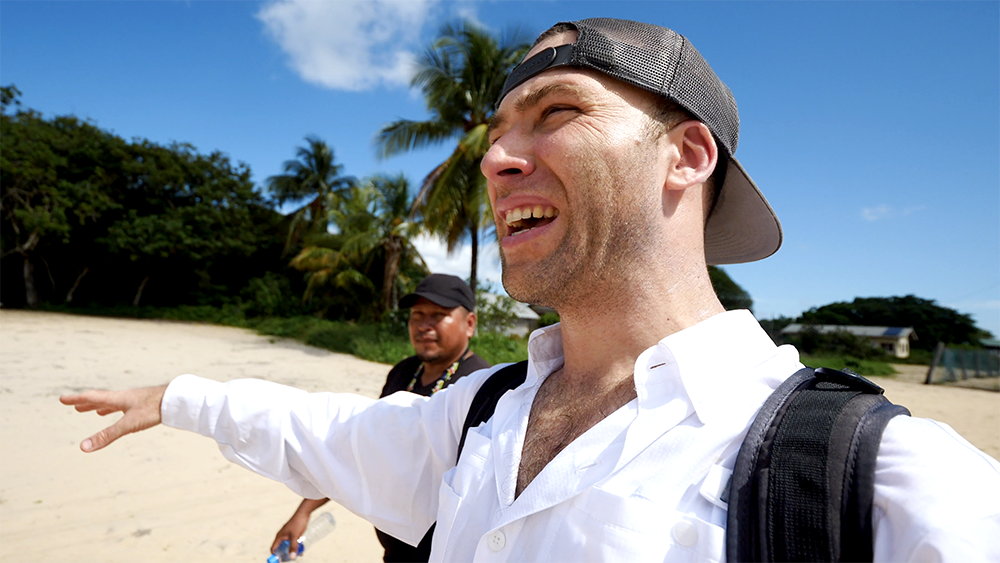 There were about 60 kids and 9 teachers there. It was open-air, a terrace, and a Surinamese flag. The kids were shy. They ranged from 4 years old to middle-school-age. The high school is in Albina. 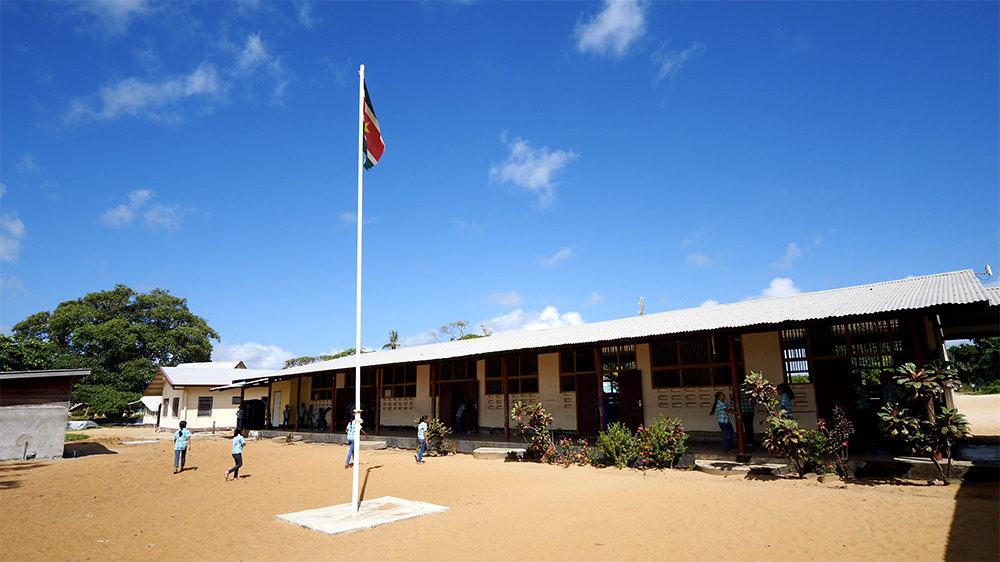 We left the school and came across a hut that shows the species of sea turtles that nest in the area, including the Olive Ridley turtle, the green turtle, and the leatherback. 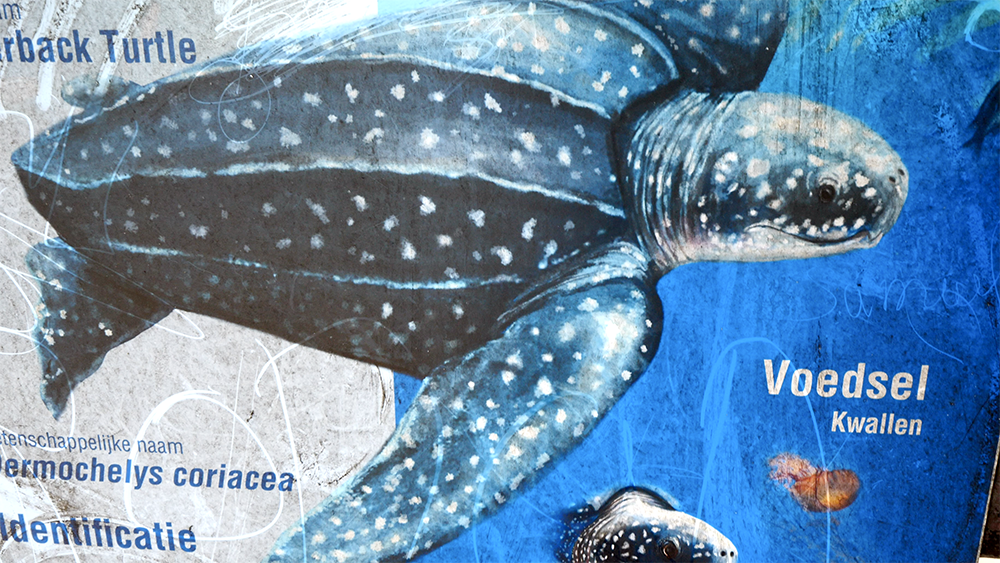 It was boiling outside! From there, I left the Myrysji Lodge, chatted with the owner, and hopped on a boat. It would take an hour for us to get back to Albina. On the way, we looked for animals in the jungle. We didn’t see anything, though, probably because it was the hottest part of the day. 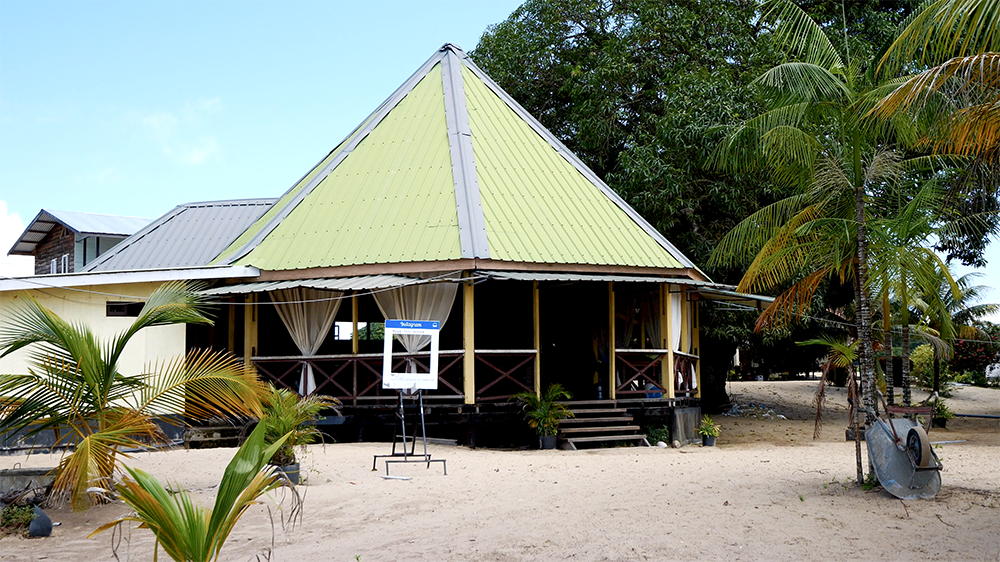 I hope you enjoyed coming with me on my Galibi town tour! If you did, please give this video a thumbs up, leave me a comment, and subscribe so you don’t miss any of my upcoming travel/food adventures!