After my day in Brownsweg, Suriname, I woke up bright and early the next day at Stone Island, deep within the interior of the country. Come along with me as I start another action-packed day by going into town to get some food and then go fishing for piranhas in Suriname. Join me and my guide as we head out to the country’s biggest lake to catch some breakfast! 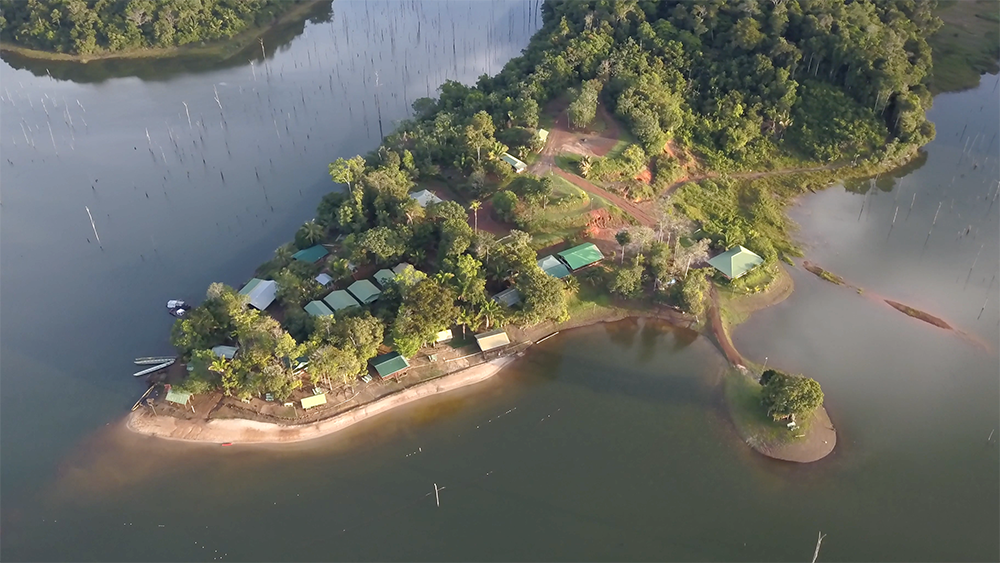 My day began at Stone Island’s reservoir, which was formed by a dam in 1964. The area used to be a forested valley, but now the only sign of that valley are the tops of dead trees that rise up out of the water! After getting some sick shots of the lake with my drone, my guide and friend Imro from Jenny Tours and I headed into town to grab some breakfast. 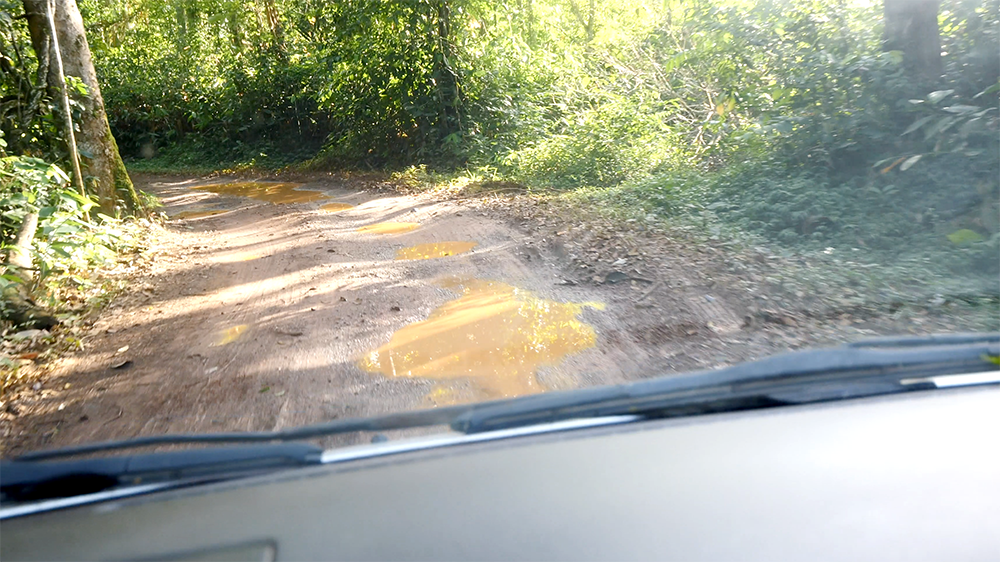 Suriname is a big mix of several cultures, including Chinese, African, Indonesian, Indian, Dutch, and the indigenous people. It’s an eclectic mix you can’t get anywhere else! 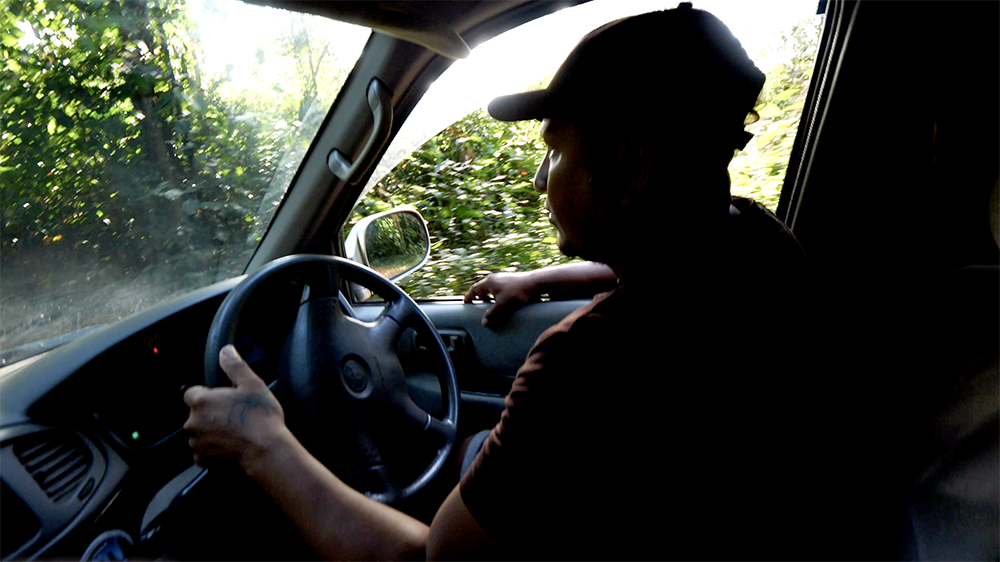 The Stone Island Resort was located about 10 minutes from Brownsweg. I couldn’t wait to see it during the day. We had to follow a dirt road to get there. It’s a tiny town with small houses, huts, and roadside restaurants. We stopped at a Chinese supermarket to see if they had some buns or wontons.

Check out the 25 Chinese Dishes You Must Eat in Shanghai, China

They had chicken, fish, and about 3 different types of empanadas. Empanadas are fried pastries that have meat inside. I got one with chicken, one with shrimp, and another with cheese. The chicken one reminded me of a churro with chicken filling. It had some Chinese flavors and was a lot softer than the Cuban empanadas I eat back home in Miami. 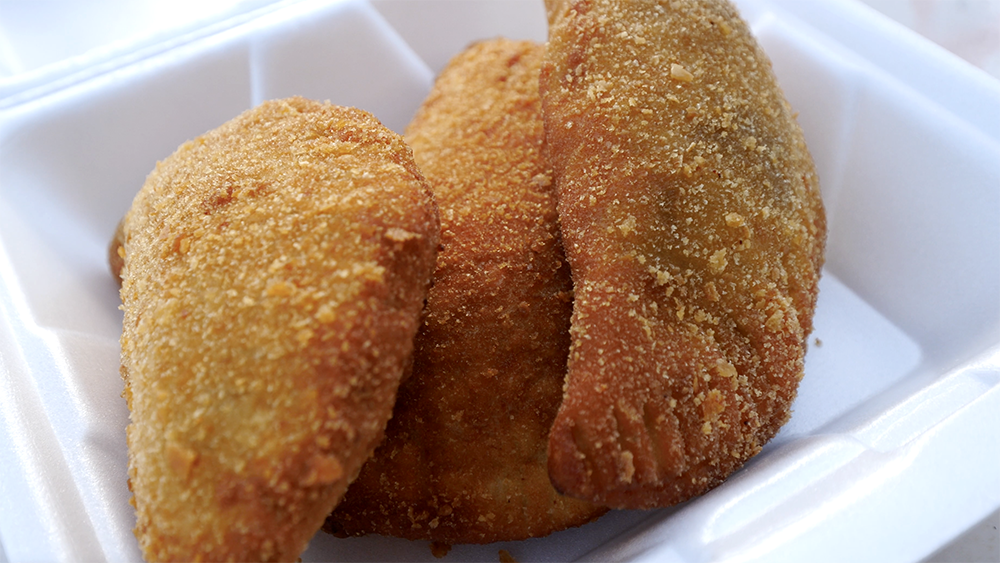 The shrimp empanada was flaky, more deep-fried, and thinner. The prawns inside were tiny and there weren’t that many of them, but it was fantastic! I loved the spices and pepper. The cheese empanada was thicker and the biggest of them all. It was basically cheese bread. It was a nice, white cheese. I dipped it into my coffee to make it better. The coffee was the best part! 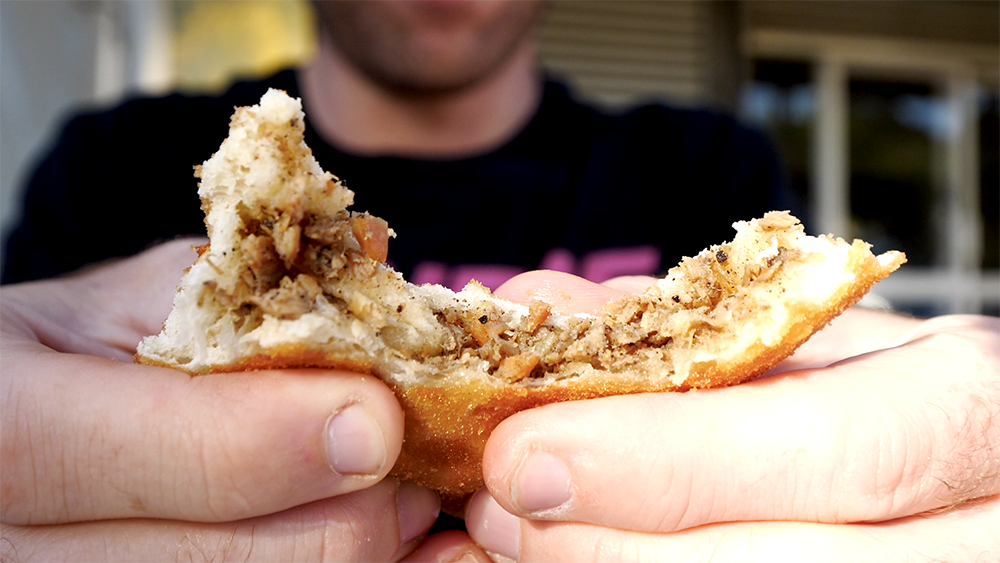 Imro bought some bread, iced coffee, and Nutella at the supermarket. I recommend buying Dutch chocolate there! I bought a coconut drink, which was like pure coconut. It was super refreshing and was like a mix of coconut flesh and coconut milk! Then Imro bought some hooks so we could fish for piranha! 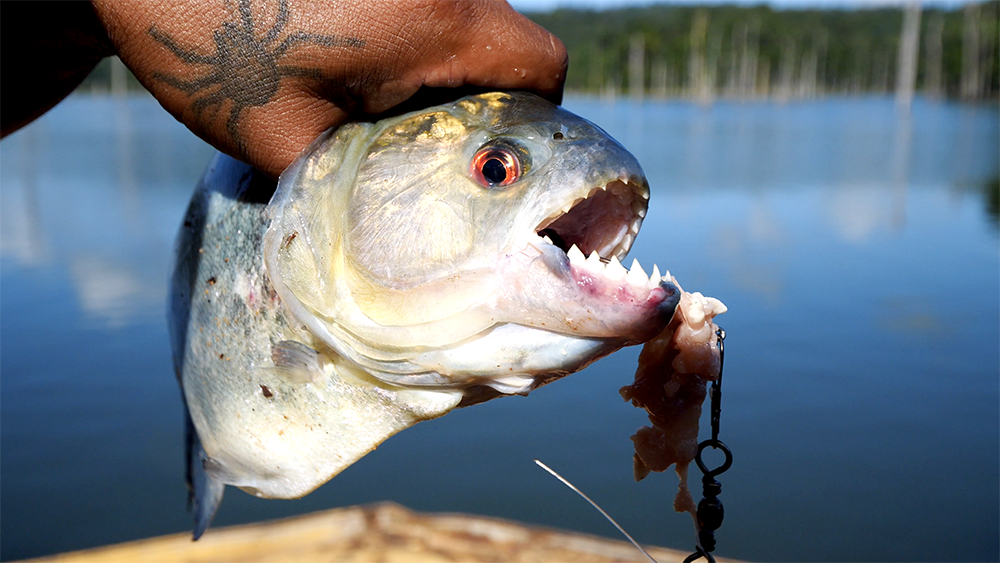 We drove back to Stone Island. The scenery and roads reminded me of Malawi, where I spent 22 days with my wife back in 2013. We stopped to see some red hand monkeys in the trees. They were deep in the bush and like 40 feet up! 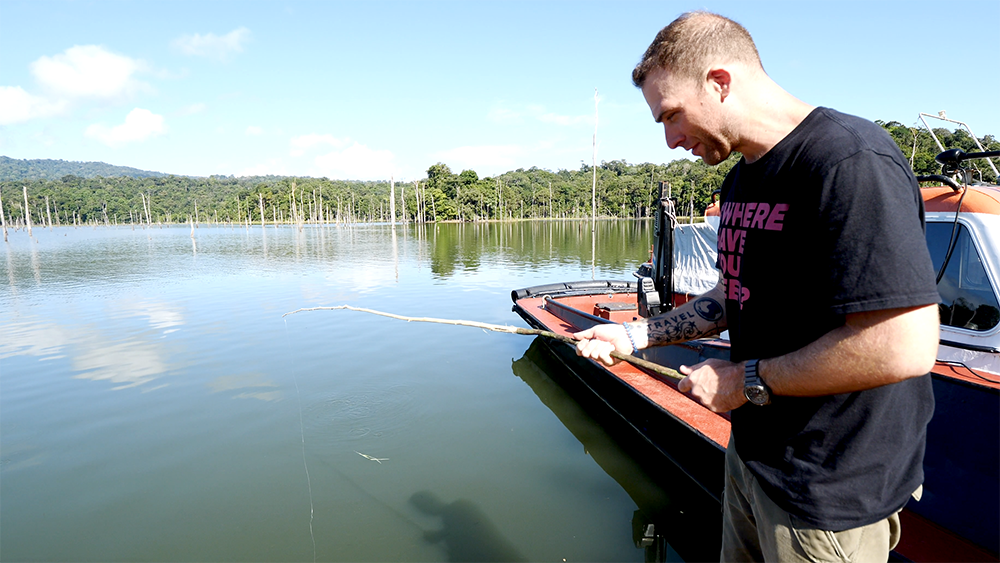 Back at the lake, we went out on a metal pier. Imro cut up a frozen chicken to use as bait. He caught a big piranha with it! Its fearsome teeth were clearly visible and I could see why piranhas in Suriname are so feared. I caught one that was nearly a foot long! Next, Imro cleaned it and we took it to the dining hall and kitchen to be fried!

Check out the 21 Places You Must Visit in Malawi

There were tons of bones in it! I waited for it to cool down. The flesh was gamy but good. The skin was crispy and I had to be careful eating it. I almost threw up because of a bone that nearly got stuck in my throat. The bones are the only thing I hate about eating fish. You always have to be super careful when eating it. 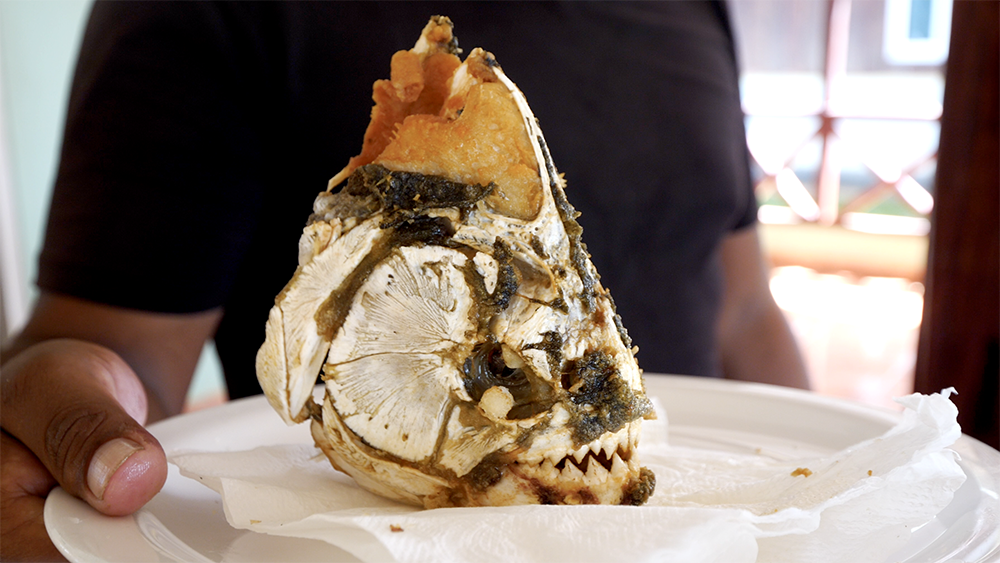 The meat was really good! There were no bones between the big spines, so it was easy to eat the flesh. I was glad there was a lot of meat! Then we went for the head. Imro told me to go for the cheeks and the brains. The cheek was so good. It was like the deer meat of fish! 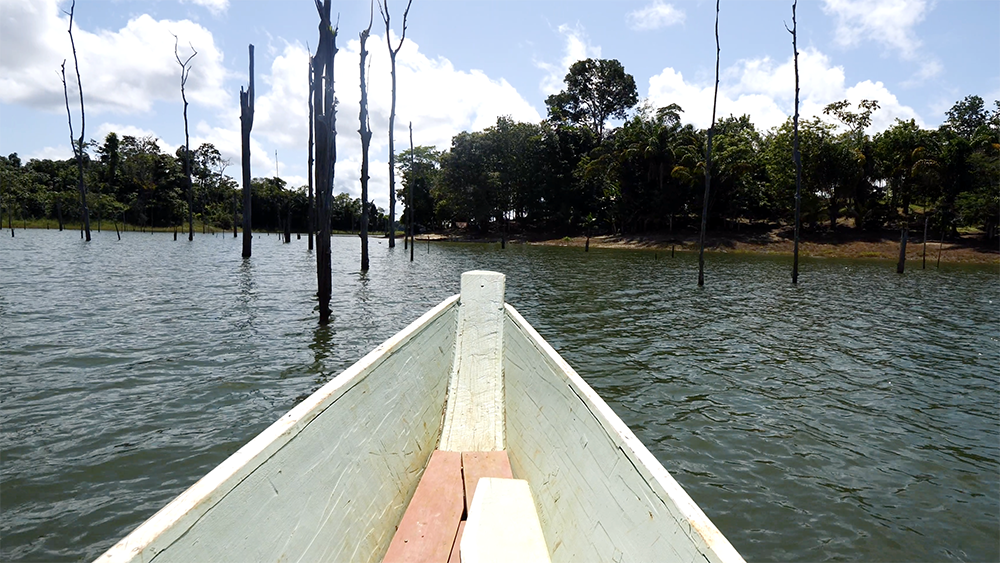 Then we headed out on a boat to go to Howler Monkey Island! Searching for wildlife is always hit or miss, but the monkeys are definitely on the island. I saw a lizard before we entered a chicken and duck farm. There’s also a huge, yellow-foot tortoise there. I’d never seen one this big before. Sadly, yellow-footed tortoises are endangered. After observing him for a while, Imro and I took a boat ride around the island! 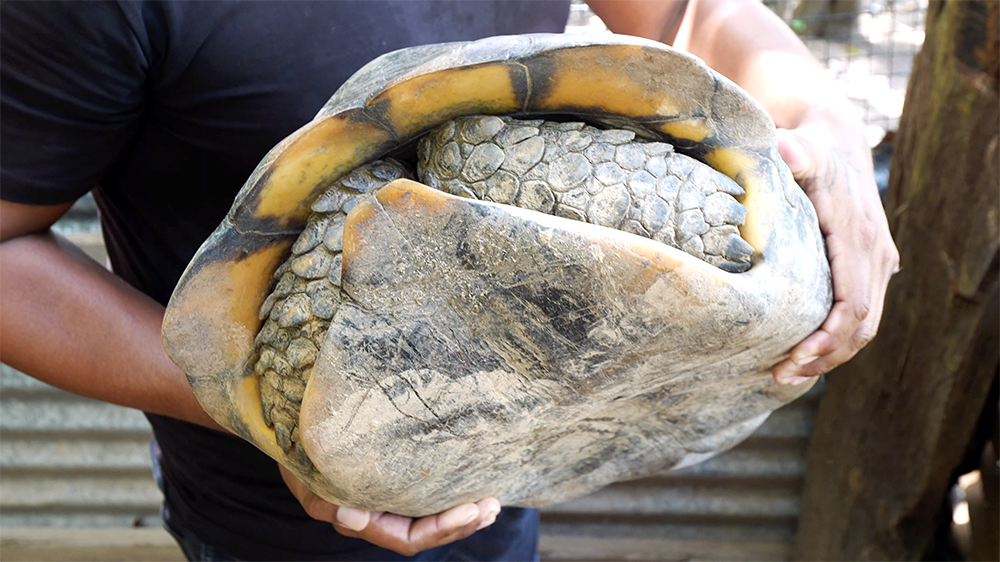 I hope you enjoyed coming with me to catch some piranhas in Suriname! If you did, please give this video a thumbs up, leave a comment, and please subscribe to my YouTube channel so you don’t miss any of my upcoming travel/food adventures!