After an eventful first day in Palumeu, Suriname, I had even more exciting adventures in store for day two! Come along with me and my guides, Julian and Ose, as we go fishing for river monsters in Suriname in the Tapanahony River and go on another awesome hike into the Surinamese jungle! 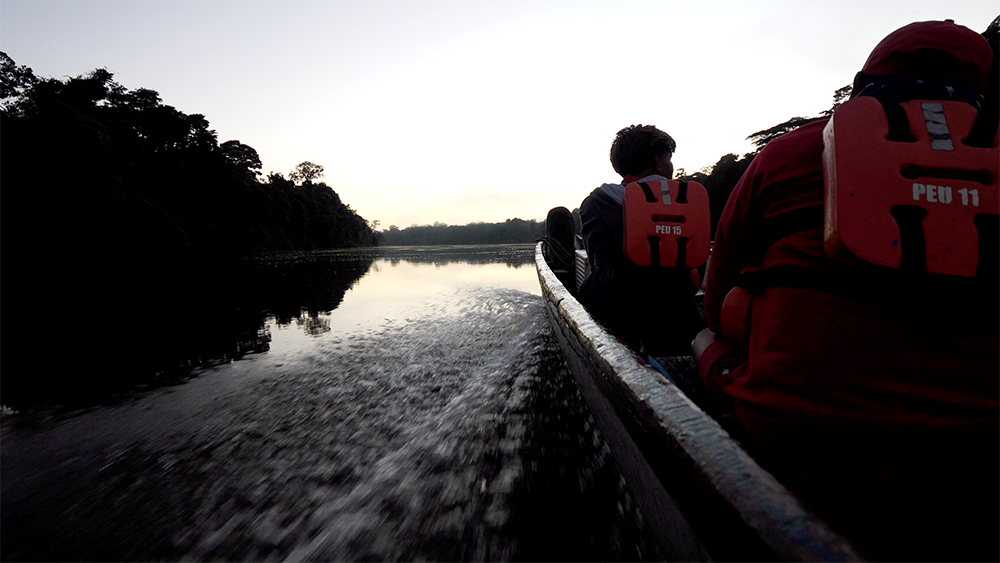 My morning began with me on a boat in the middle of the Tapanahony River at 6:20 in the morning with Julian from Mets Travel and Tours! This was going to be an awesome day and I could not wait to get started. 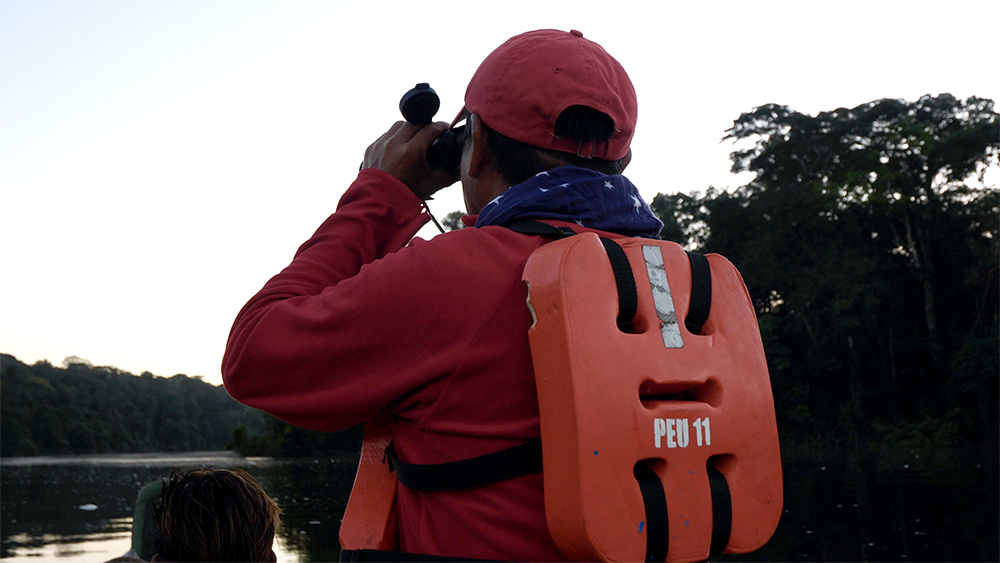 My guides were born in the jungle and grew up there, so I had the best guides possible in Palumeu. They learn to live in harmony with nature and the river. It’s something most city people never get to experience!

We’d be having breakfast on a rock by the shore. We had coffee, bananas, tea, eggs, and raisin bread. I made a delicious egg sandwich. There was some gouda cheese in there with it. The black coffee was also super strong! As I ate, a group of about 20 people arrived. They were really cool tourists from the Netherlands! 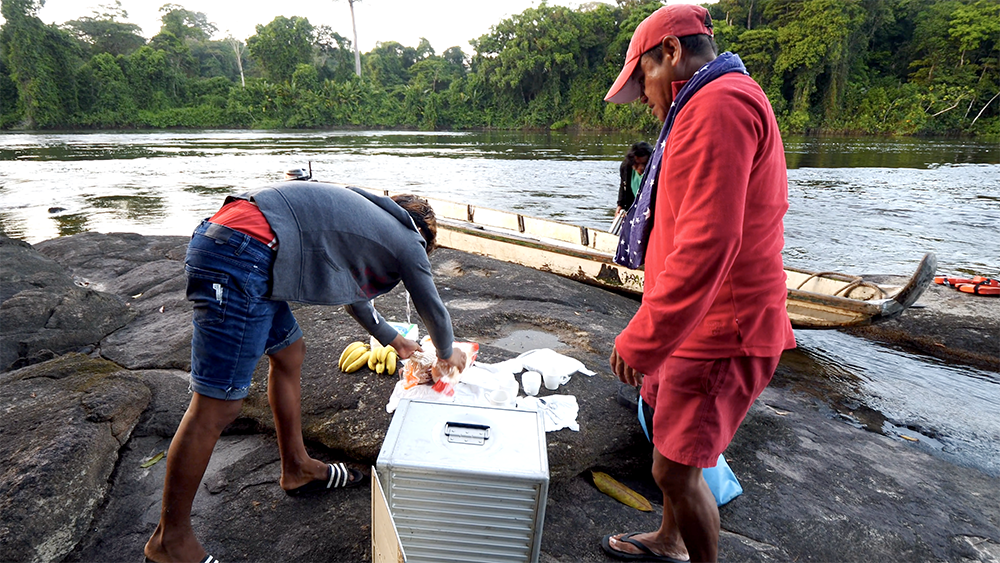 I learned that the tide sometimes is too high to eat on this rock, but usually, you’ll have at least one meal here in Palumeu. We’d chill there for a while, and then we’d head out on our jungle trek. I was really hoping to see some wildlife, which is why I came here. 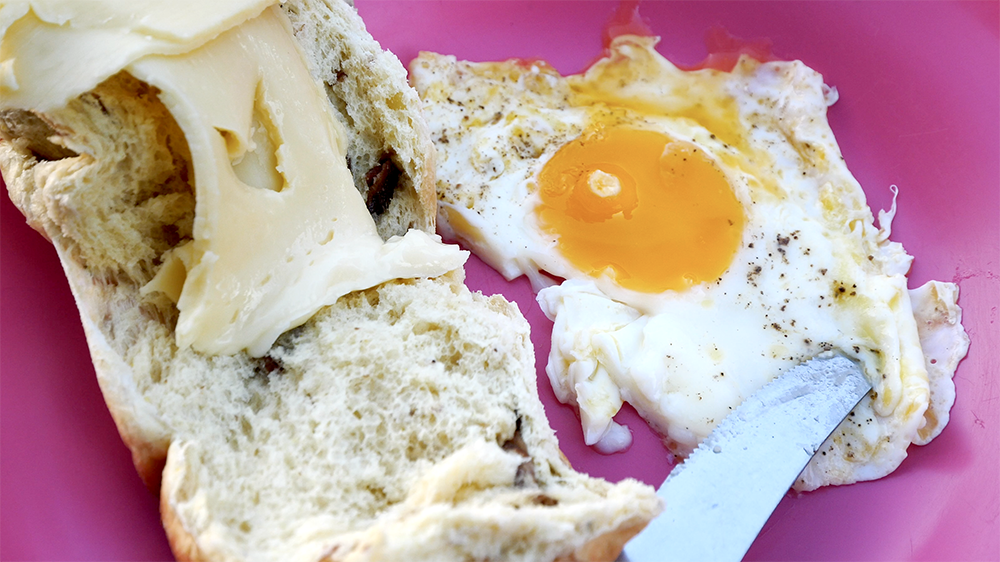 We headed out on a one-hour boat ride. As we rode, we saw four yellow-headed vultures drying their wings in a tree. We passed through some rapids, but luckily, our guides knew exactly what they were doing and navigated it like a pro. The water funnels its way between the rocks and creates the rapids! 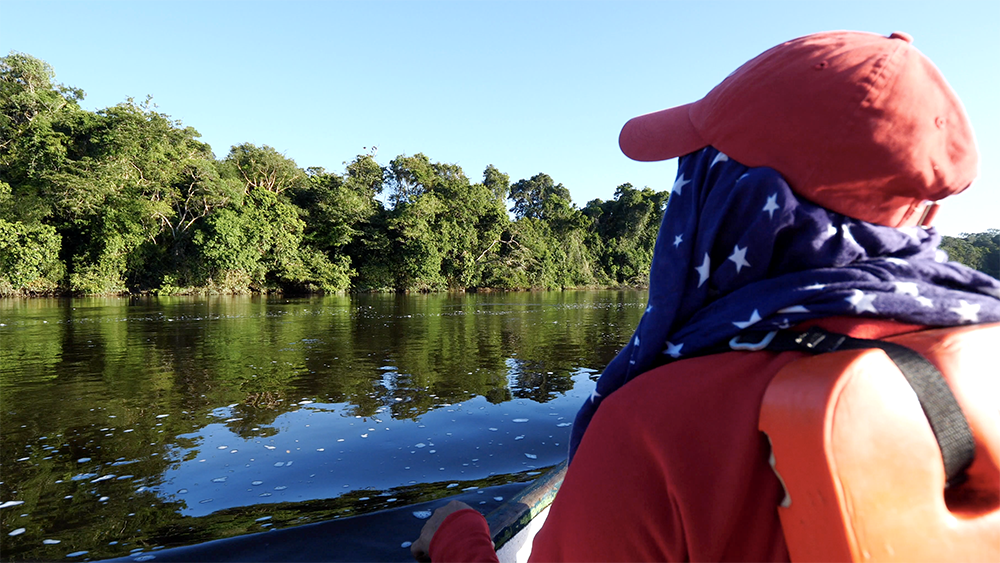 We landed and crossed lots of boulders so we could get a better perspective of the rapids. It was so cool, but we had to be careful because you can easily slip on a rock. The spot we found was epic! The rapids took up the entire width of the river and cascaded between and around lots of rocks! There was also a lot of seaweed in the river.

My guides caught some small fish to try to use as bait to catch piranha. They found a huge monster of a fish and hacked at it with a machete and brought it in. This fish is normally very expensive! We used the organs to fish for more, so we could hopefully catch more river monsters in Suriname like this one! 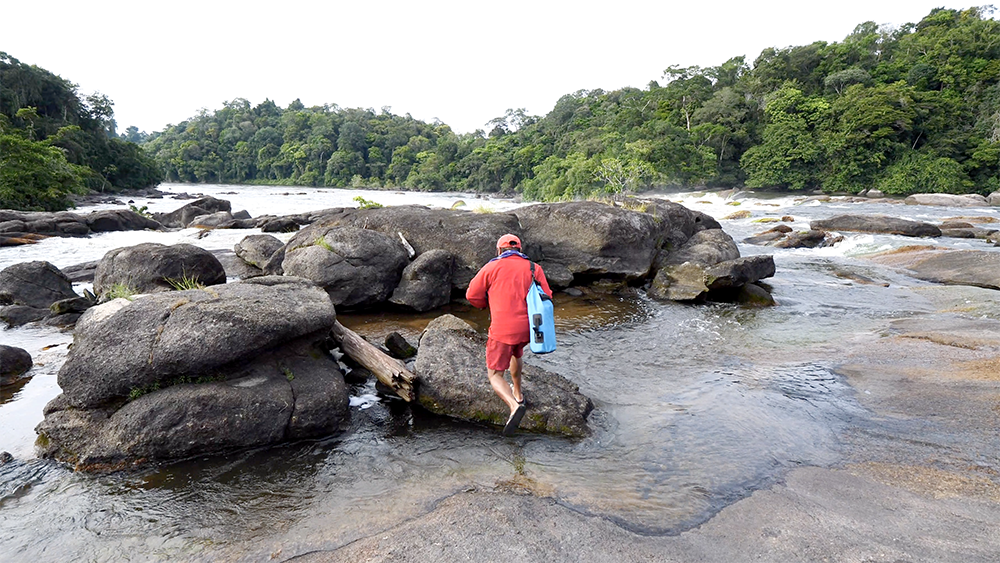 I followed my guides across the rocks. I had to be super careful following them. They kept moving around to find a good spot, but ultimately didn’t catch anything. 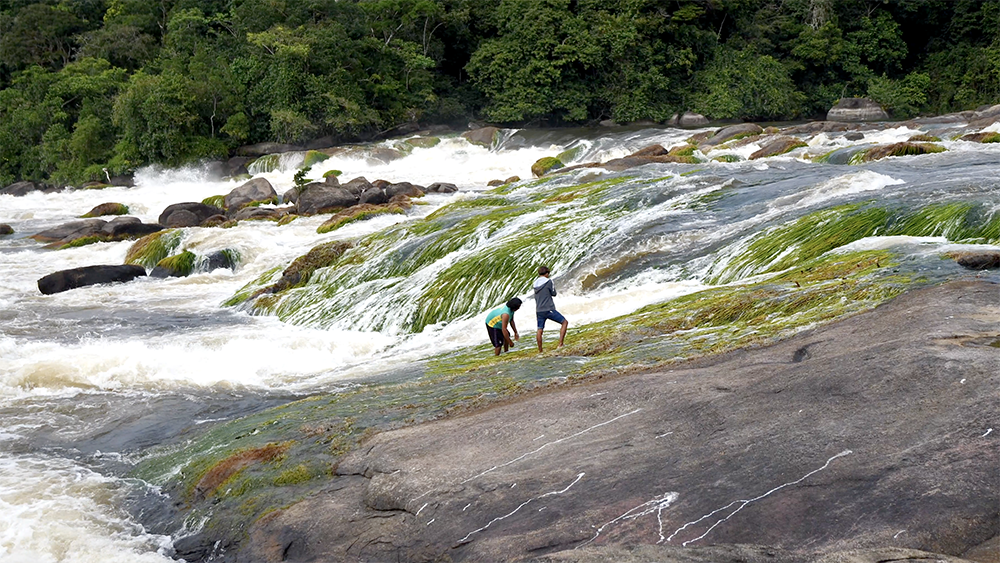 From there, we hopped back on the boat for a few minutes and rode back to base camp, Mabuka. Then, we headed into the jungle. I learned that the trails were created by locals to create pathways for the Amerindians to move through the jungle to visit their families. 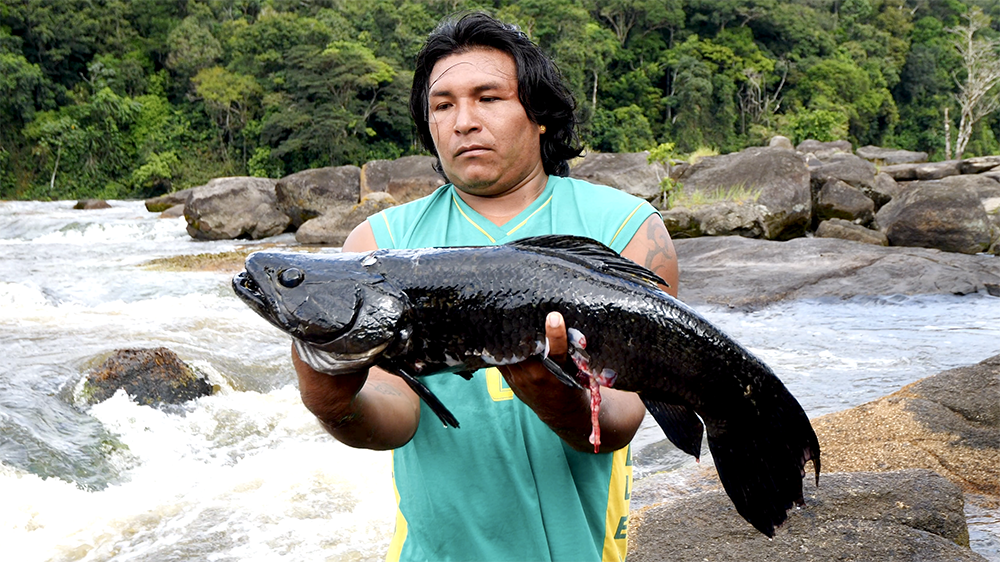 We found a tarantula’s burrow, but beyond that, we weren’t having much luck finding animals. Wildlife is very hit-or-miss in the wild, but I was surprised we hadn’t really seen anything. We arrived in the secondary forest, which has lots of low vegetation and bush. It’s super dense! 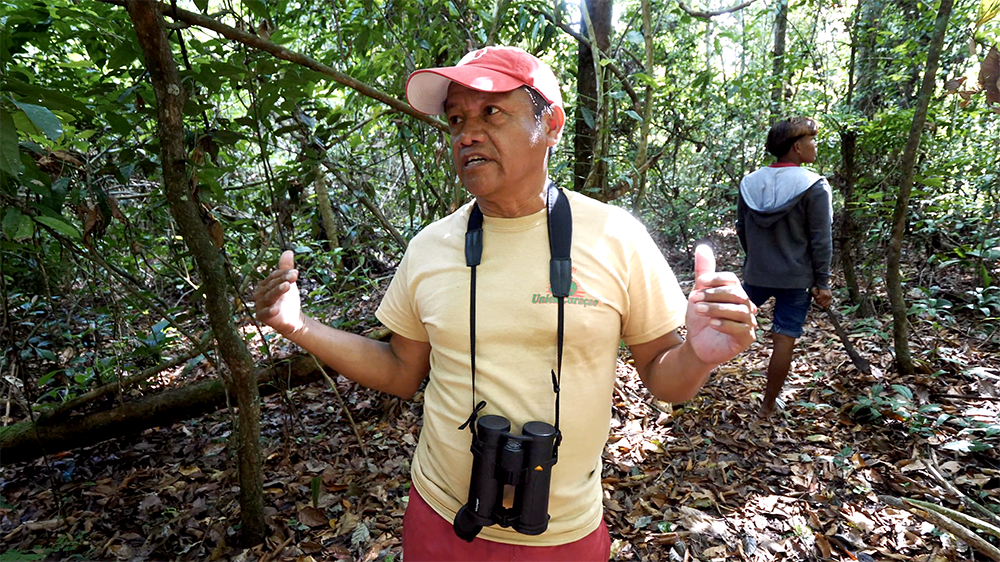 The primary forest has way less bush and lots of super tall trees. We found a dry leaf frog on the ground. He looked just like a leaf! We also found a tree whose bark is used to treat malaria. After an hour, our trek was nearing its end. It was more intense than yesterday’s because of the bush.

Our captain caught lots of bait while we were gone. I was ready to fish again! We headed up the rapids, which was such a rush! I almost flew out of the boat! We got to a calm area and started fishing. There was a piranha taking all of our bait, but unfortunately, we didn’t catch anything. But it was still an epic morning! 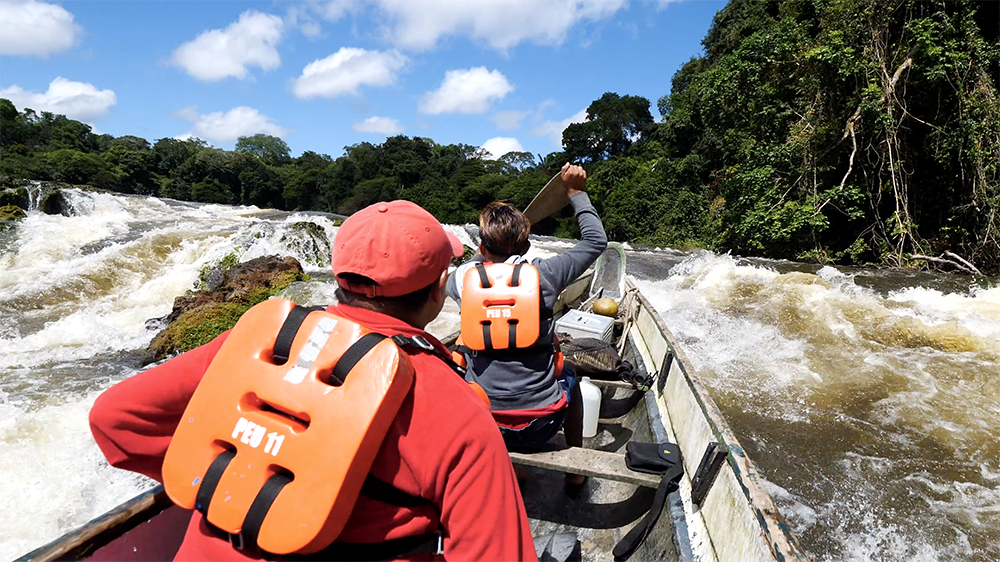 I hope you liked coming fishing river monsters in Suriname and trekking with me in Palumeu, Suriname! If you did, please give this video a thumbs up and leave me a comment. Also, please subscribe to my YouTube channel so you don’t miss any of my upcoming travel/food adventures!