Located along the Brahmaputra and Barak River valleys in northeast India is the state of Assam. Known for its wide range of environments, it’s no surprise that many of the top places to visit in Assam are characterized by their natural beauty. Assam’s tropical forests, grasslands, deciduous forests, wetlands, and bamboo orchards are just part of what makes this state so special. 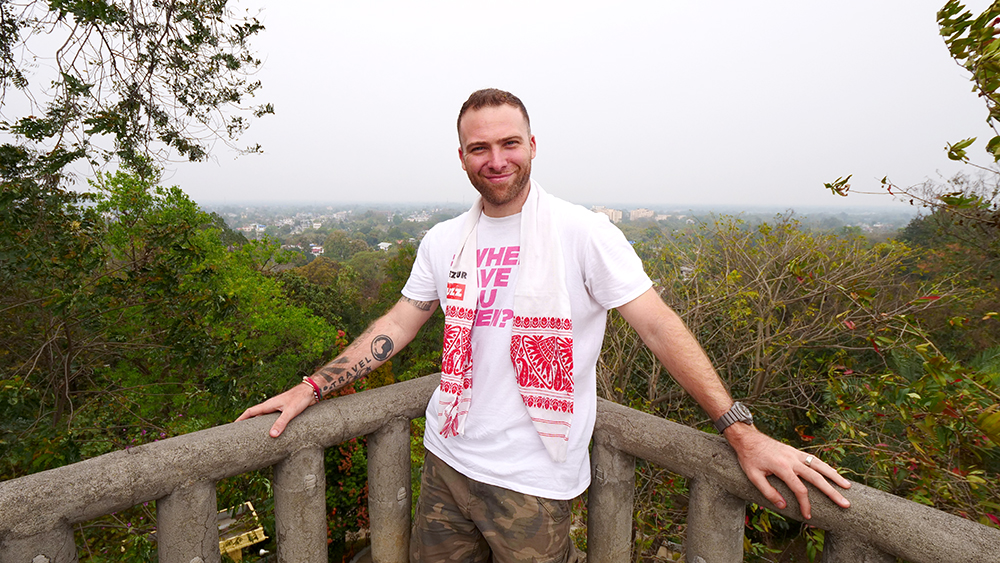 With a rich history that encompasses the Ahom Kingdom, and countless historical sites, Assam is rife with incredible historical and cultural sites. And its urban areas offer both a look into modern Indian life and a glimpse into its traditional past. There, you’ll find mouthwatering yet subtly-flavored cuisine as well as fiery foods bursting with tantalizing flavors. Assam may not receive the glory that other parts of India do, but it’s an absolute treasure trove for travelers. These are the 7 places to visit in Assam, India. 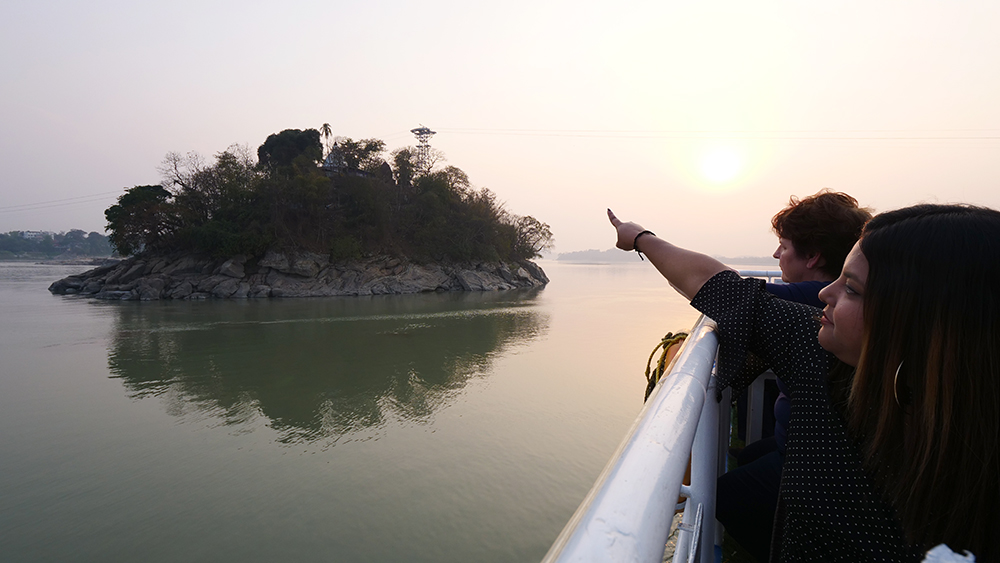 With a long and storied history that dates at least as far back as 400 CE, the city of Guwahati has long been one of the top places to visit in Assam. This city along the Brahmaputra River is the largest city in northeast India. It’s also the best point of entry into the region. Guwahati is peppered with many Hindu temples, earning it the nickname “the City of Temples.” Two of the best places to visit in Assam to learn about the Hindu religion are Ganesh Temple Latasil and the 18th-century Nine Planets Temple. 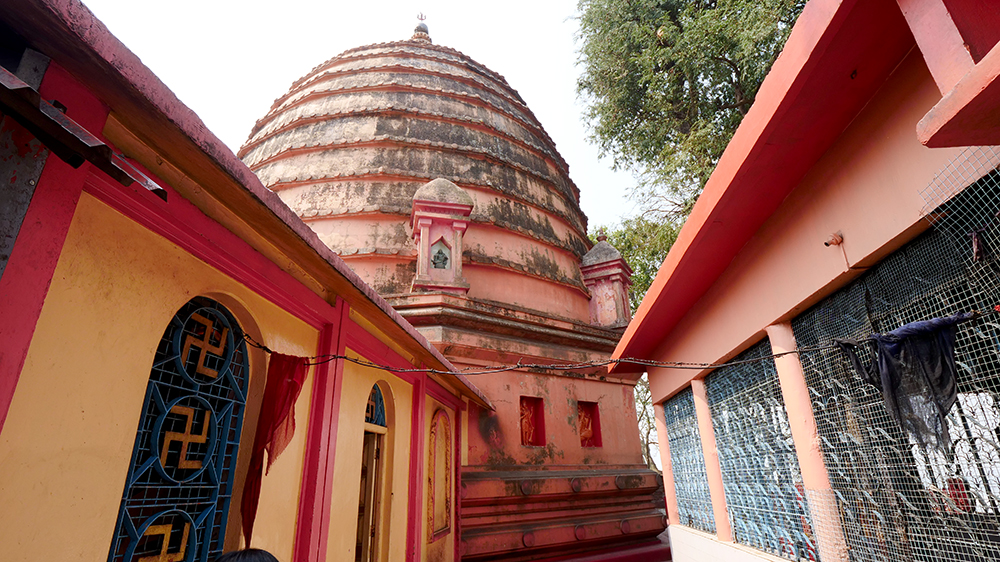 For standard Indian fare, try the puchka, sweet parathas with aloo ki sabzi, and chole bhature at Fancy Bazaar. But if you’re after authentic Assamese cuisine, you can’t beat the Upper Assamese Mughlai Thali at Michinga Ethnic Cuisine. The mutton, paneer kofta, and eggplant are all winners! 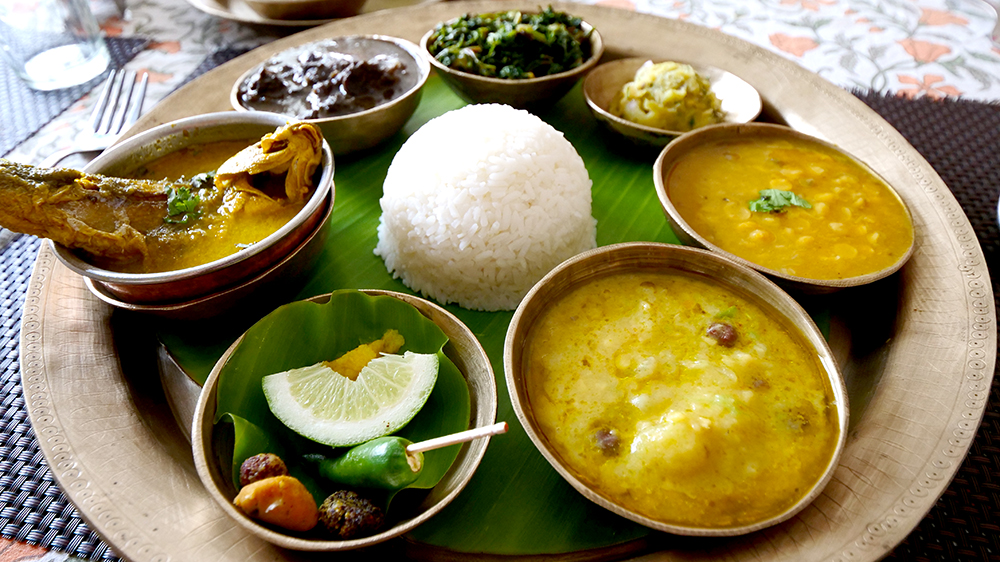 Another fantastic thali is Paradise Restaurant’s Parampara Thali, which includes an exotic and bony pigeon with sesame curry, a divine teamed fish with mustard sauce, and fried eggplant. 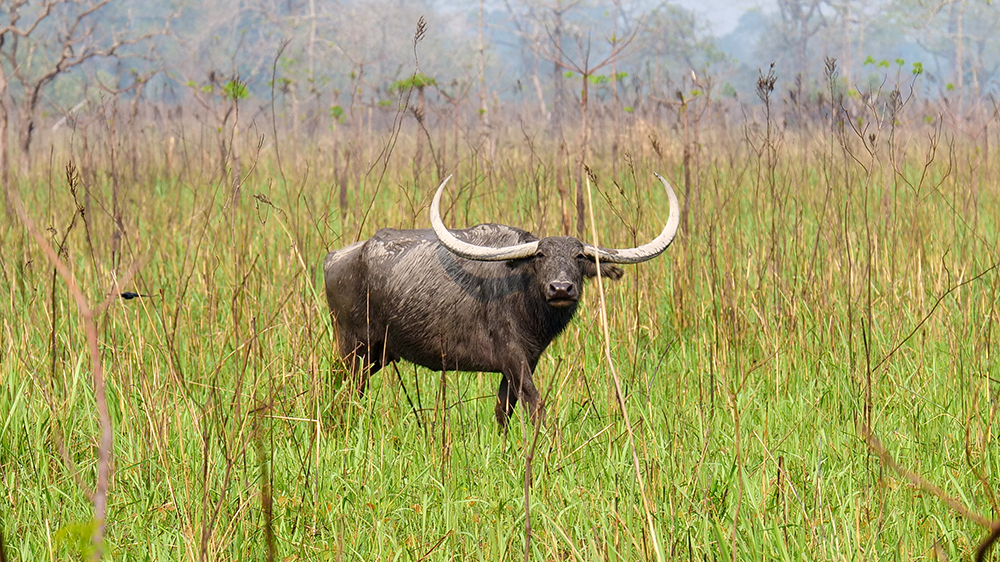 If you head three hours north of Guwahati, you’ll find Manas National Park. This 366.8-square-mile tiger reserve, elephant reserve, and UNESCO World Heritage Site is located in the Himalayan foothills. It’s one of the best places to visit in Assam for animal lovers. The park is home to Asian elephants, tigers, rhinos, water buffalo, clouded leopards, deer, and much more, so be sure to check it out! 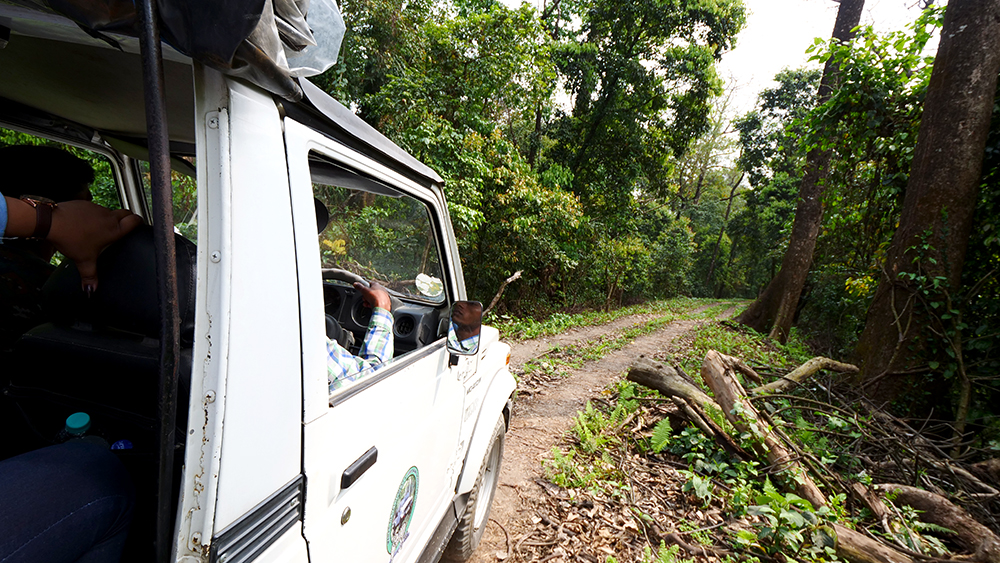 The best time to visit the park is between November and April. I recommend staying at least two full days so you can get the most out of your visit. Two days will get you four three-hour game drives: one each morning and one each afternoon. Wildlife sightings can be hit-or-miss, so be patient and don’t get discouraged if you don’t see anything right away. 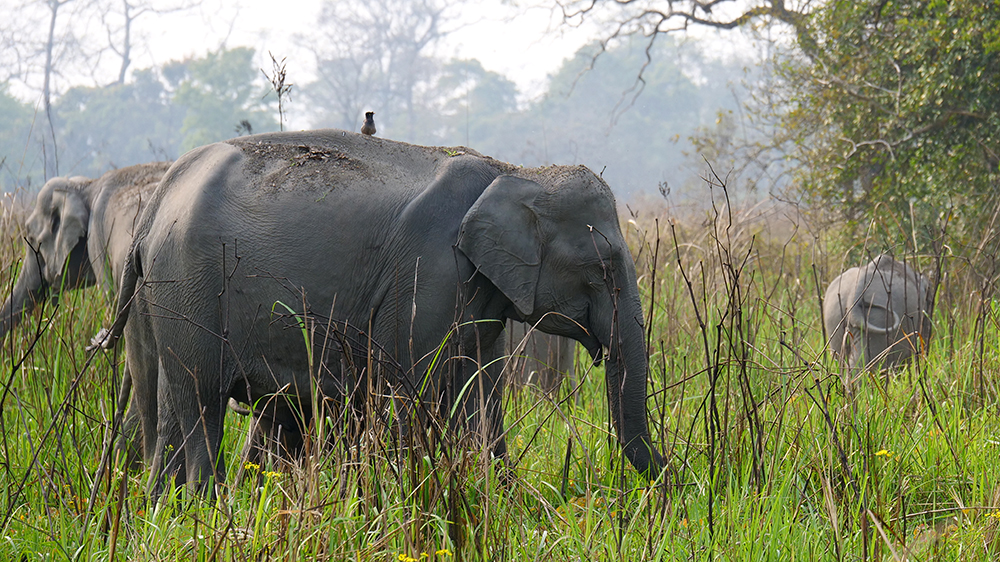 There are only 80 or 90 Royal Bengal tigers in the park, and they’re extremely elusive. Sometimes even the guides go long stretches of time without seeing one! I suggest the Florican Cottages for your lodgings, which offer comfortable accommodations and tasty food. 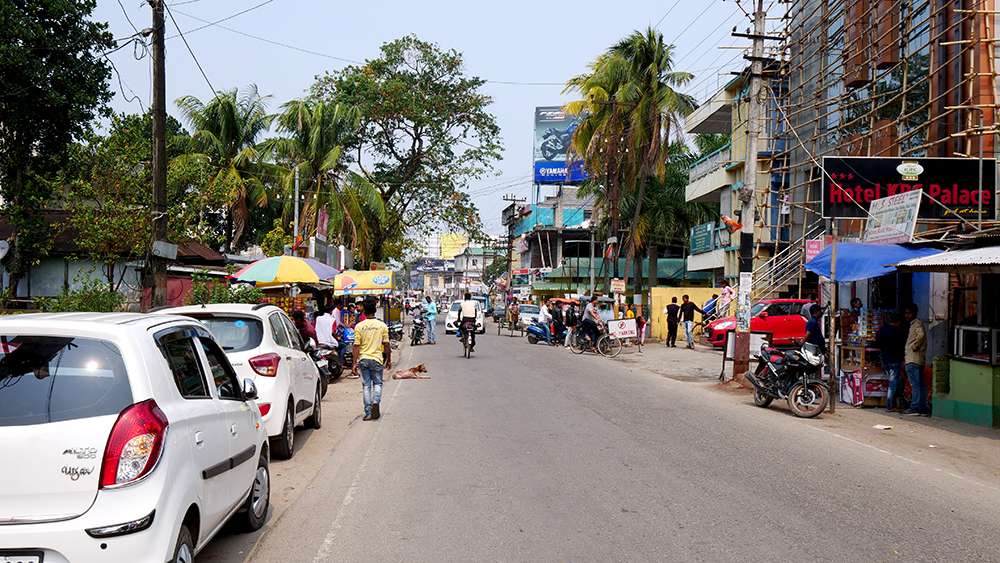 Just a three-hour drive from Guwahati is yet another Assamese city that is steeped in legend. Its name translates to “town of blood,” which is a reference to the bloody aftermath of a battle said to have taken place in town between Lord Krishna and Lord Shiva. A fantastic spot to see depictions of figures from Hindu mythology is the Shri Shri Mandir Gate. It depicts Lord Hanuman lifting a mountain called Dronagiri Parvat. 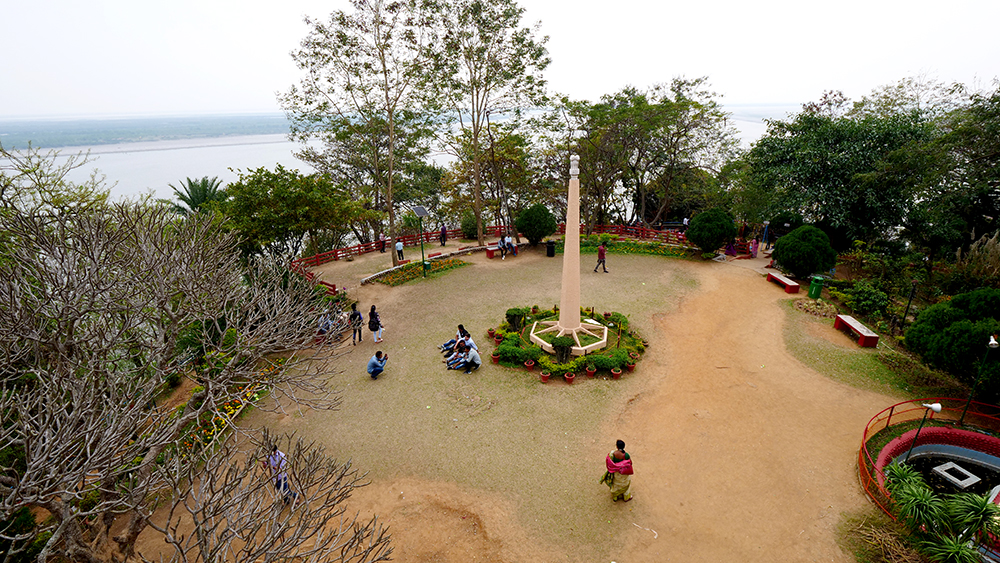 History buffs will love the ancient, carved stones and pillars of Chitralekha Udyan Park. Even more of Tezpur’s history can be seen at the Bamuni Hills archaeological site just outside the city. There, sculptures and carvings from a once-grand temple complex lie in ruin. You also cannot visit Tezpur without trying some of its fantastic food. 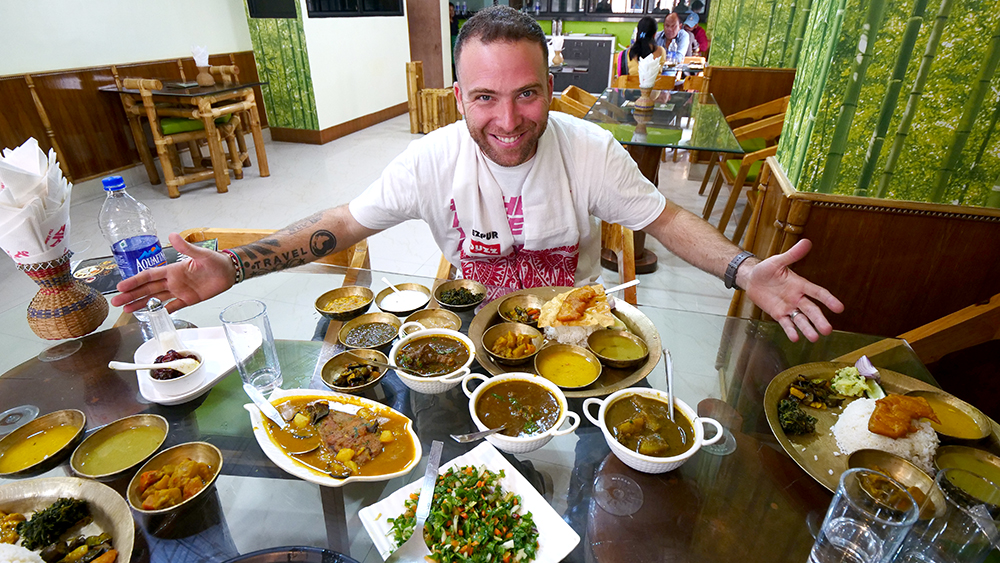 I highly recommend the bamboo chicken and banana leaf chicken at Arunima’s Takeaway and the Assamese thali at Khorika – The Ethnic Restaurant. You also shouldn’t skip out on the puchka, which is the regional name for pani puri. You can try it right out on the street and see how many you can down before you get full! 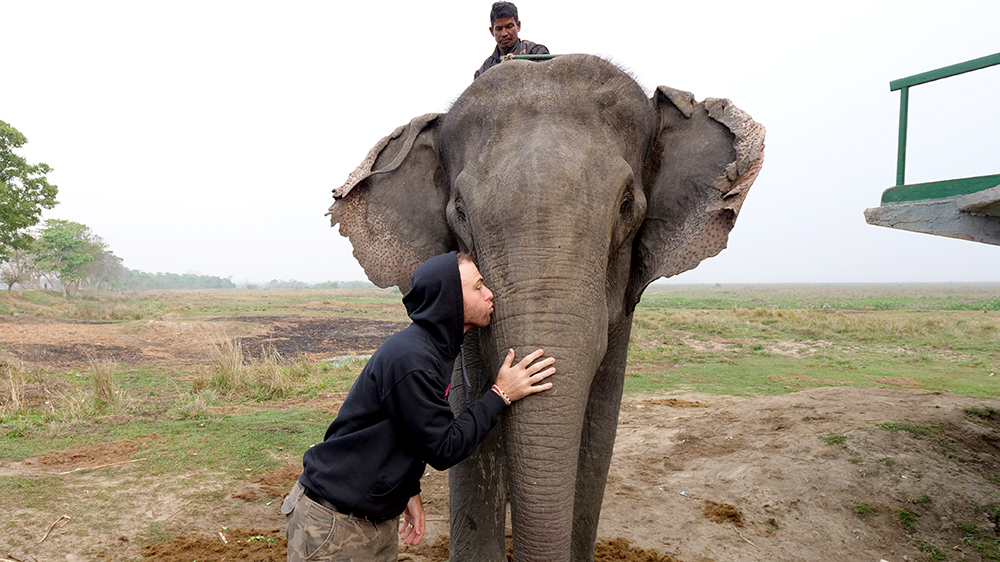 One of the main reasons I chose to visit Assam in March of 2019 is its wildlife. Kaziranga National Park is perhaps the best spot in the state to spot animals like elephants, rhinos, tigers, swamp deer, water buffalo, and more. 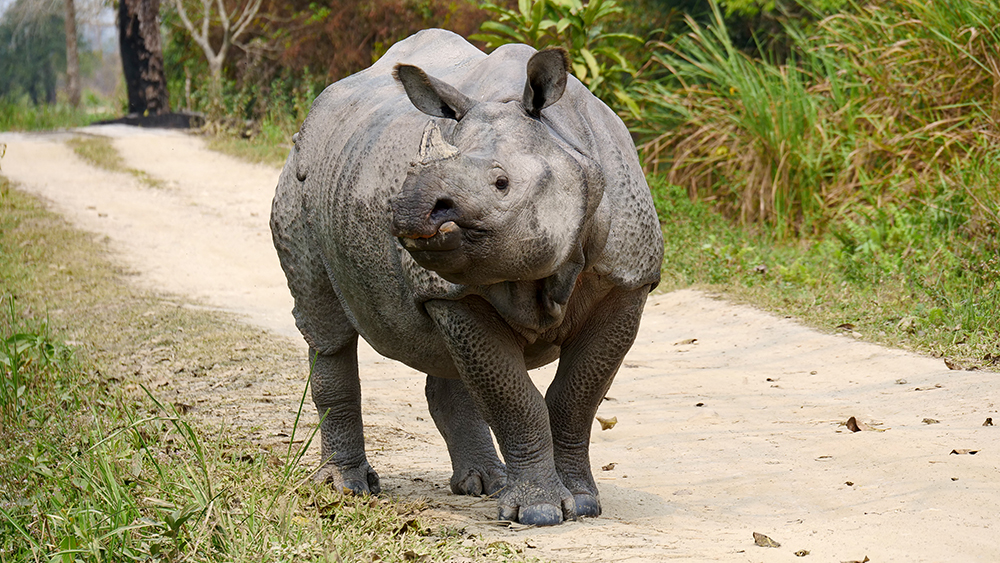 I recommend visiting early in the year when the daytime temperatures don’t get oppressive. Just don’t forget your sunblock and mosquito repellent! Like with Manas National Park, I suggest staying at least two days so you can squeeze in at least four game drives. 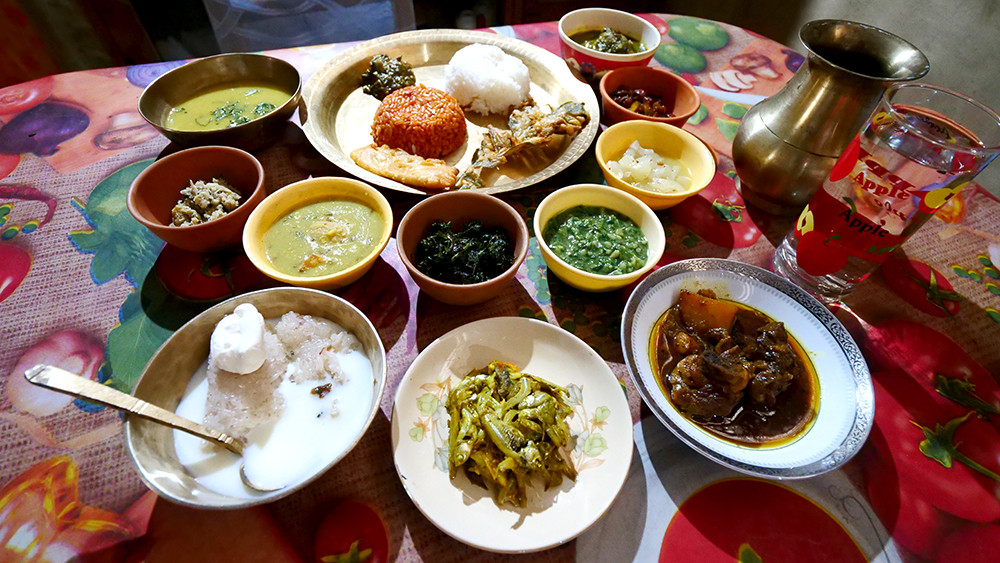 I also recommend checking out the nearby Kaziranga Orchid and Biodiversity Park. There, you can see the flora in the area, visit the Assam National Museum, and watch traditional dance performances. They also serve an exceptional thali with over 25 items! Whether you’re more into animals, culture, or food, Kaziranga National Park has it all and has to be on anyone’s list of places to visit in Assam! 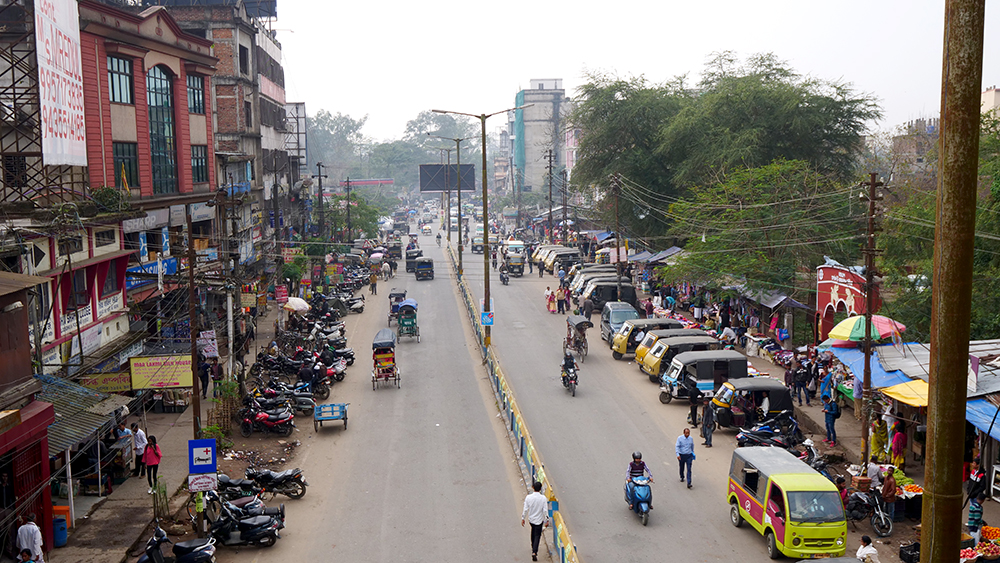 The 18th-century capital of an independent Ahom kingdom, the small city of Jorhat is one of the best places to visit in Assam. Get a glimpse of some of the local wildlife at the nearby Hoollongapar Gibbon Wildlife Sanctuary. To learn more about the history of the Ahom Kingdom, head out to the Sukapha Samannay Kshetra memorial. The memorial is dedicated to the Tai prince who founded the kingdom, Sukaphaa. 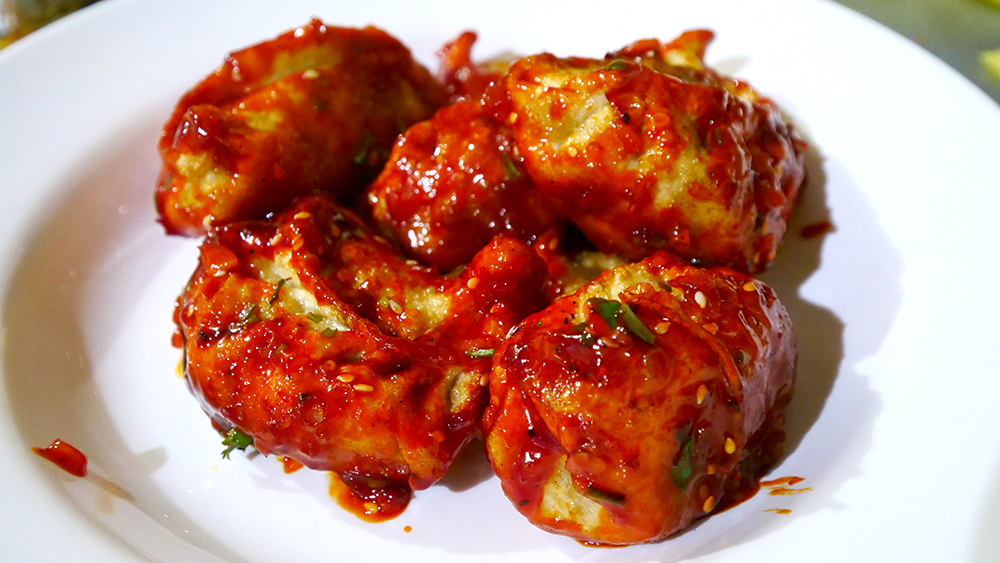 Much of the food in Jorhat has a real kick of spice that’s not for the faint of heart. If your taste buds and stomach can handle them, try the spicy momos at Break Time Restaurant. You can also eat spicy pani puri on the streets. Milder fare like the sweet and sour raj kachori at Crunchy Bites and the phenomenal Upper Assamese thali at Chouka Ethnic Cuisine are great options. Another must-have are the tender and smoky tandoori chicken drumsticks at Neev’s, which are bathed in a rich, creamy white cheese sauce! 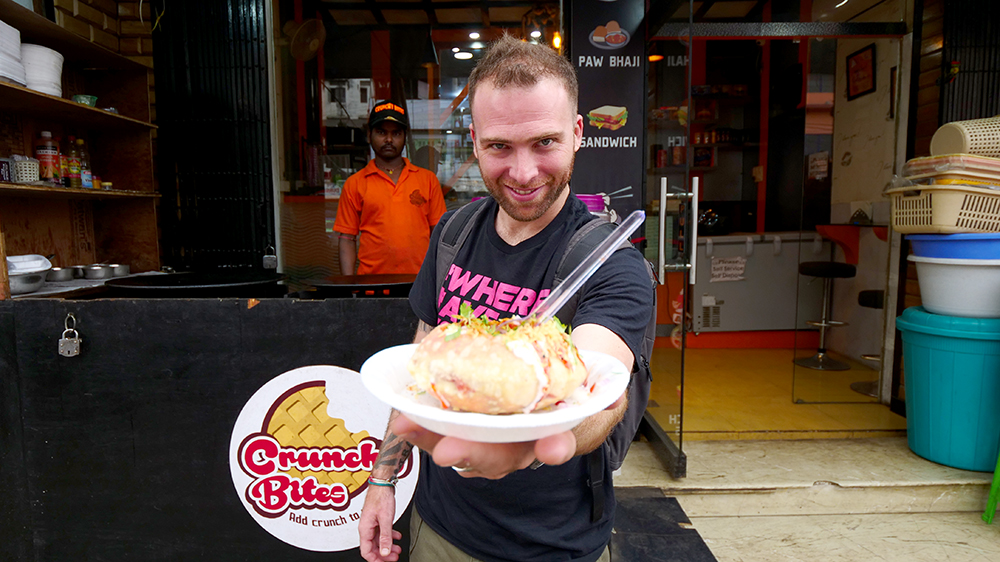 It would also be a crime to miss out on visiting nearby Majuli Island, which is among the best places to visit in Assam and deserves its own entry.

Check out the Top 10 Things to See and Do in Jorhat, India 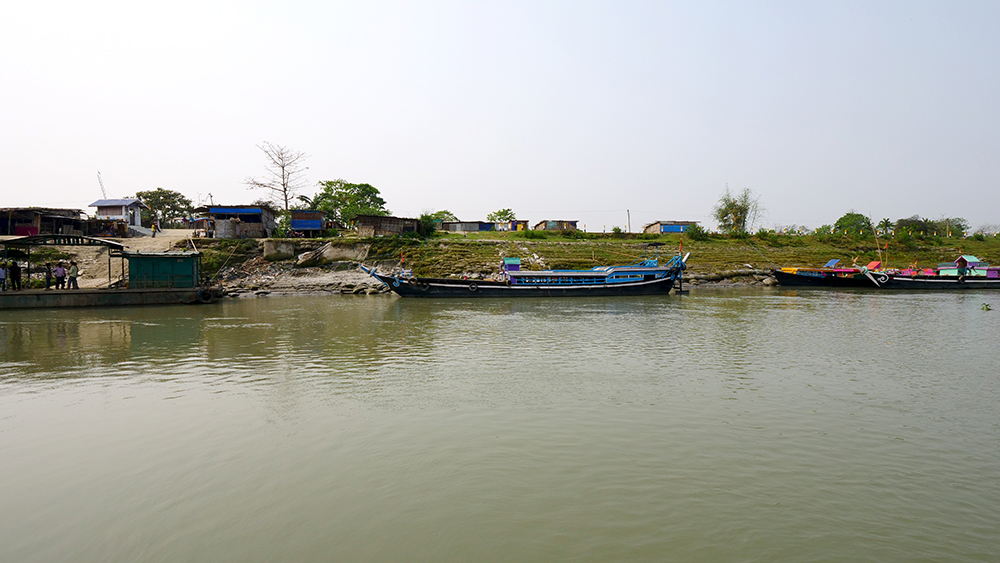 There is no doubt in my mind that Majuli Island is among the must-see places to visit in Assam. Located in the middle of the Brahmaputra River, Majuli Island is where you should go to sink your teeth into Assamese culture. The island is roughly a one-hour ferry ride from Jorhat. On the island, I recommend visiting the temple to Lord Krishna and the Sri Sri Uttar Kalambari Satra. Sri Sri Uttar Kalambari Satra contains gorgeous paintings of Lord Hanuman, Lord Rama, and Garuda. These satras are institutional centers that are associated with Vaishnavism. 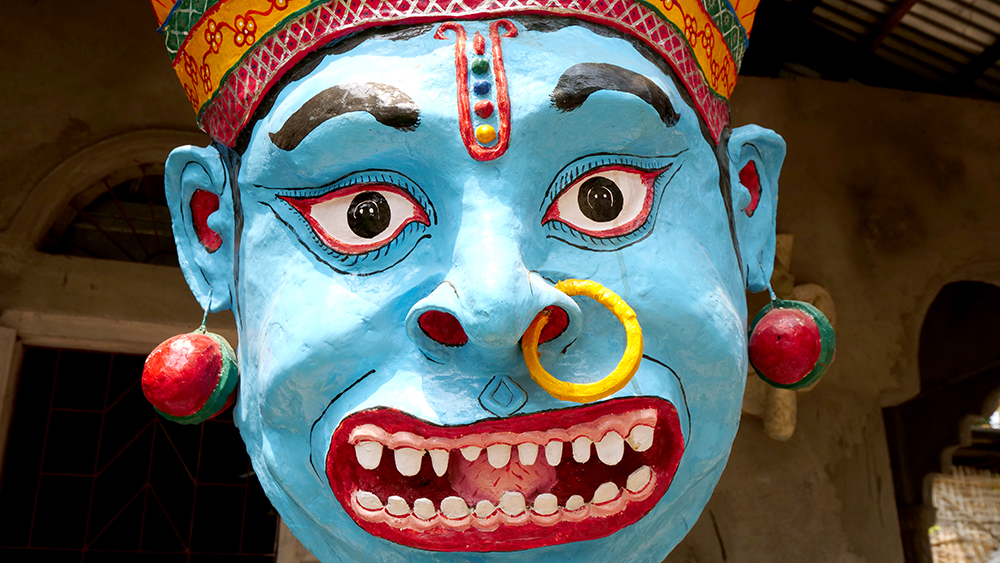 One of the island’s satras, in particular, makes the trip to Majuli Island worth it. At the Nutan Chamaguri Satra, trained craftsmen create beautiful and intricate masks of gods, demons, and other figures from Hindu mythology. Some of the masks are so detailed that they even have moving mouths! Hang around the satra to witness a dance performance by a young boy dressed as Lord Hanuman. 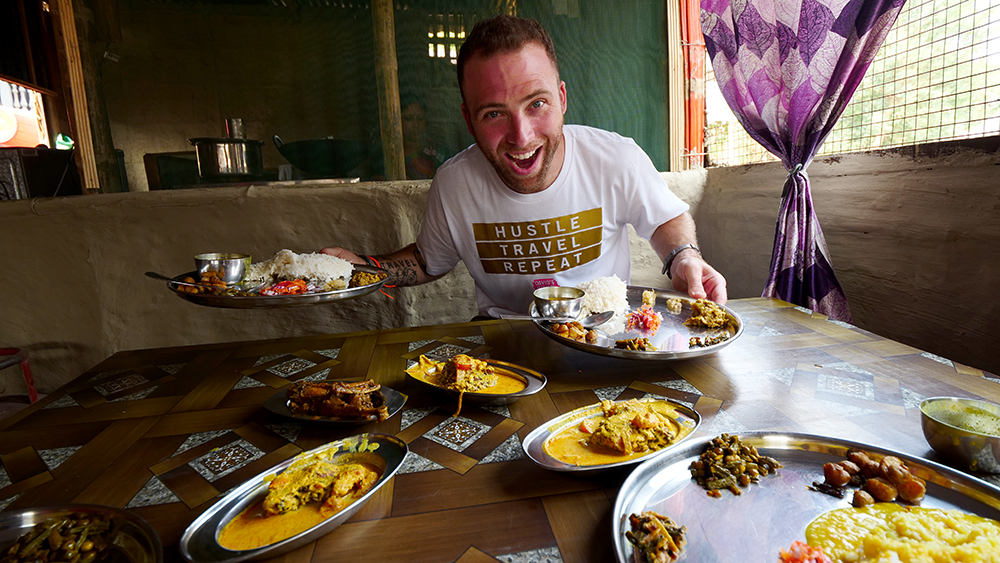 Afterward, you can buy some of the smaller masks as souvenirs before you head over to Bitupoan Bhojonalaya, a restaurant in Majuli Town. There, I suggest ordering their phenomenal veg thali with chicken curry and fish curry on the side. They’re outstanding together!

Check out my Majuli Island Travel Guide in Assam, India 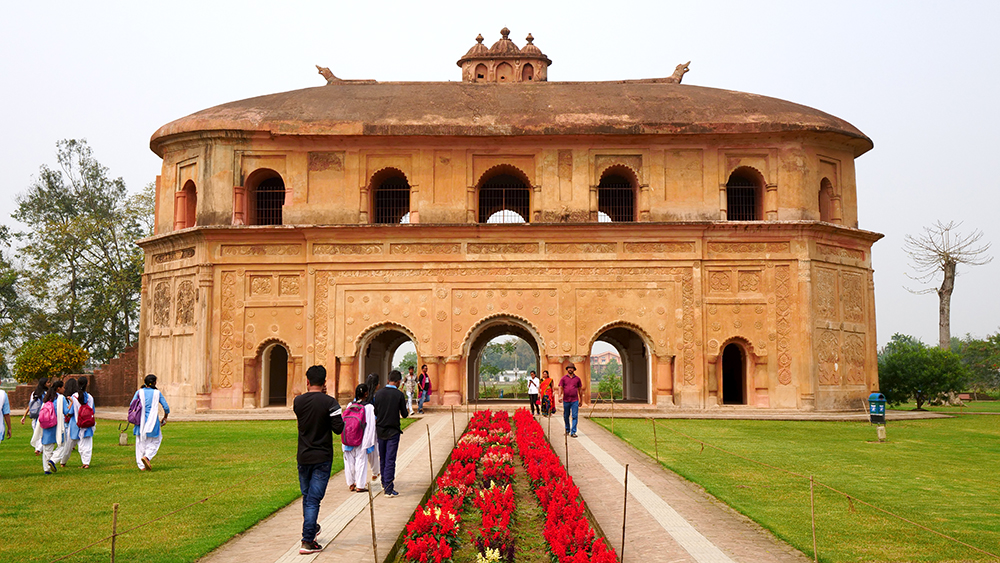 Roughly 90 minutes north of Jorhat is the small, historic city of Sivsagar. This city served as the capital of the Ahom Kingdom from 1699 to 1788. Remnants from the Ahom Kingdom still stand today. Because of its rich history, many of Sivasagar’s prominent sites are of the historical variety. As a history buff, I have to recommend the Rang Ghar Pavilion, an 18th-century sports arena that is also one of the oldest-surviving amphitheaters in Asia. 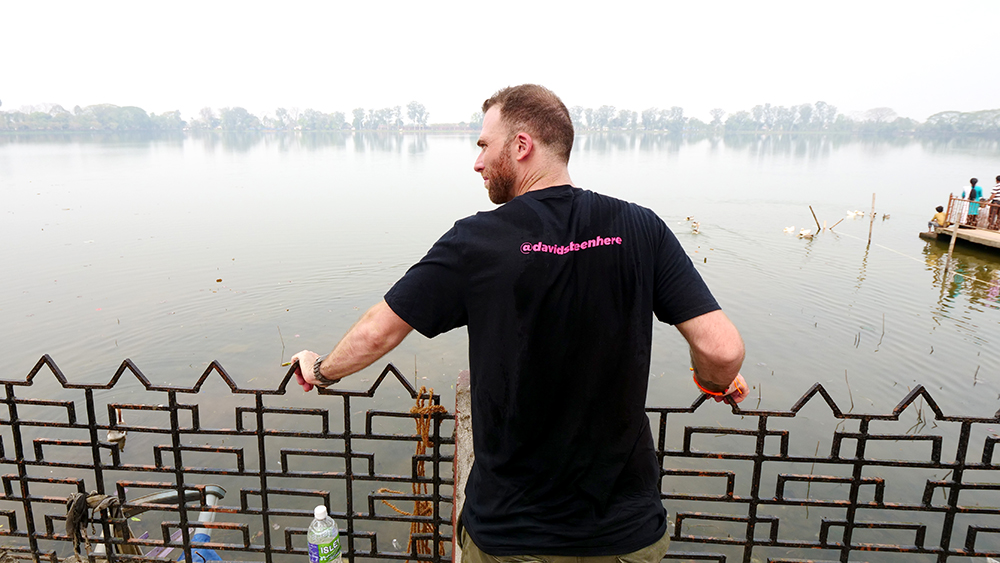 Another of the top places to visit in Assam is Talatal Ghar. It’s an underground, 18th-century palace that contains two underground tunnels. Round out your tour of the local historical sites with a stop at the beautiful Kereng Ghar, a 7-story pinkish-orange castle that was built in 1750. When you get hungry, try the empanada-like Mughlai paratha at Maar Akhol Restaurant or the divine Upper Assamese pork feast at Heritage Restaurant. Their bamboo pork is one of the most incredible dishes I’ve ever eaten in India! This dish alone makes Sivasagar one of the top places to visit in Assam. It really is that good! 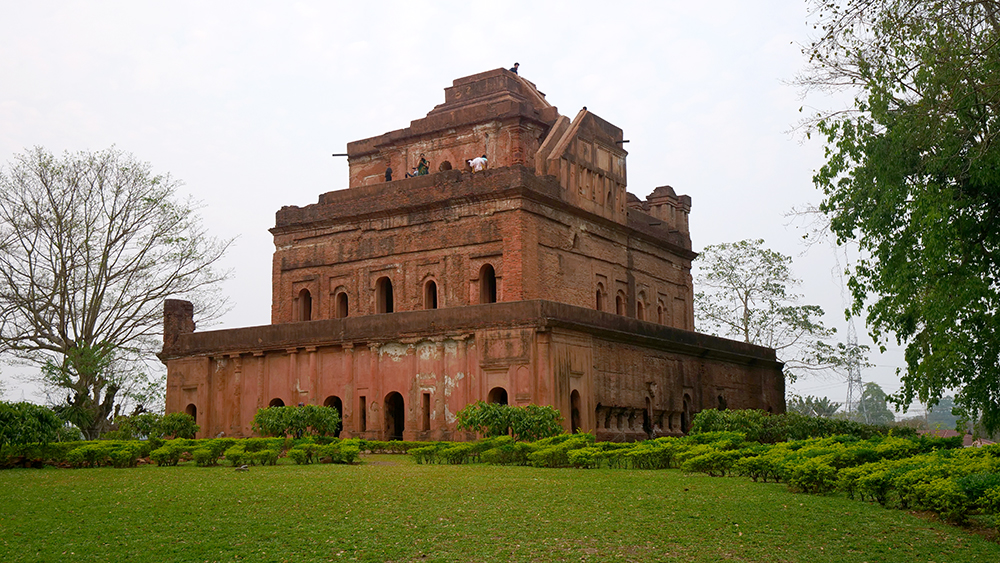 Check out the Top 15 Places to Visit in India

The time I spent in the Indian state of Assam is some of my favorite days I’ve ever spent in the country. Each day was filled with new and unexpected adventures, extremely friendly and hospitable locals, and incredible sights. From the national parks to the historical sites, I was in awe of everything Assam had to offer. Book a trip to Assam today to experience it for yourself! 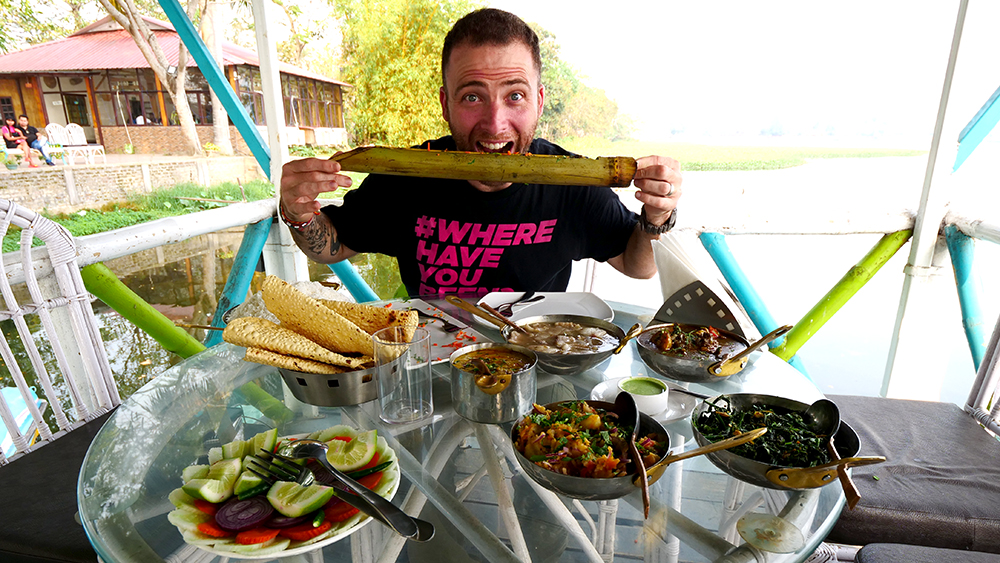 2 thoughts on “7 Places to Visit in Assam, India”