My incredible second day in God’s Own Country, Kerala, India, continued at the beautiful Varkala Beach! Come along with me as my boy Vishnu and I check out a wild paraglider on the cliffs and visit the beach. Then, we enjoyed Indian street food in Kerala, including tata dosa, puttu, and chicken thoran in Varkala, India!

Vishnu and I started our afternoon atop the cliffs above Varkala Beach and headed off to get some incredible cardamom coffee at Coffee Temple. The shop is located in a popular shopping area among tourists. There are tons of restaurants and shops along the path here, which is like a boardwalk atop the cliffs. It’s the perfect place to buy souvenirs! 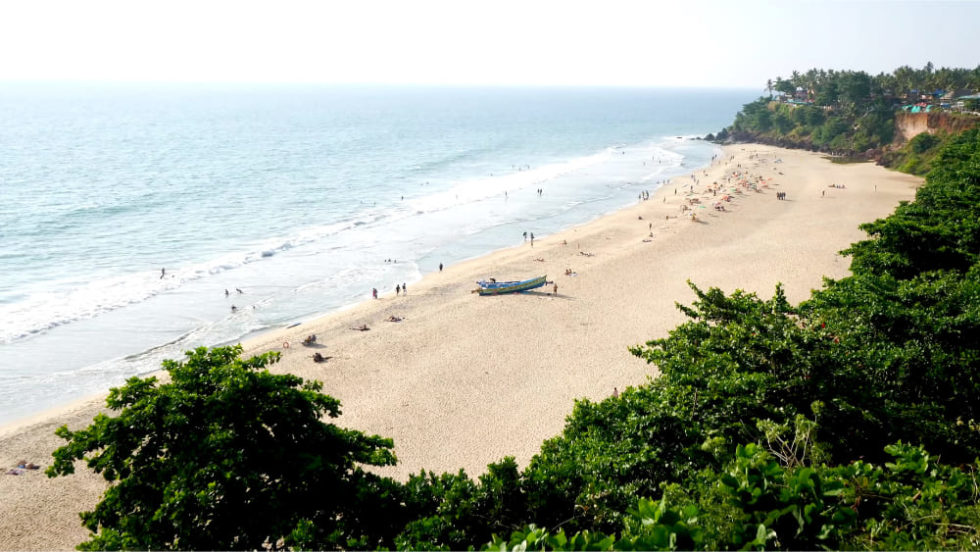 Coffee Temple is an open-air restaurant. They’re famous for their cardamom coffee, which is a super strong black coffee. Usually they also serve it with milk, but they didn’t have any while we were there. I’m usually not big into adding sugar to coffee, but in this case, it helps bring out the cardamom flavor. 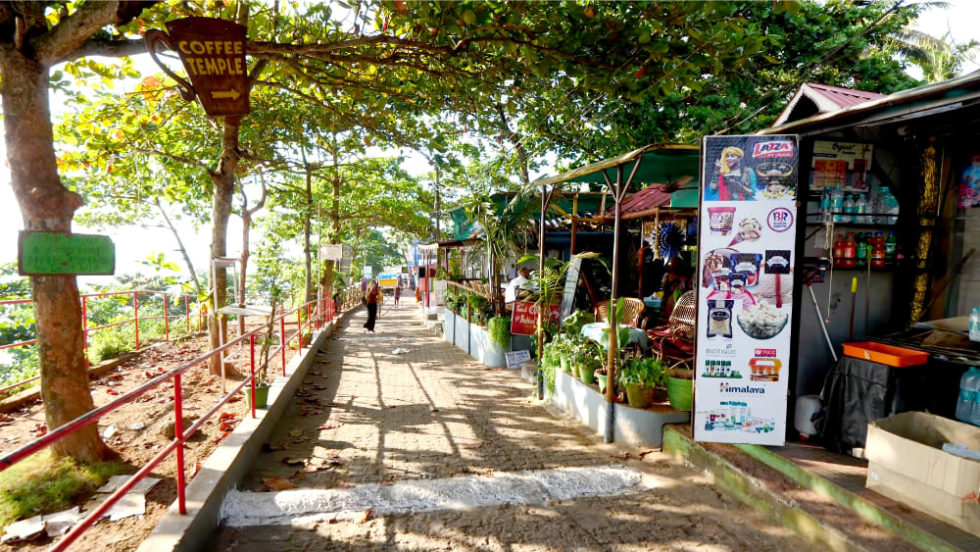 Varkala is a very chill beach town. It gave me the impression of a hippie or rasta town. I loved the setting with the beach right there. Then, we headed to a shop that sells scarves and shawls. I needed something to cover my head because it was super hot and I was starting to burn. I wanted something cool and traditional. There were wool, silk, and cotton options, but there wasn’t really anything there I liked. So we pressed on to another shop further down the boardwalk.

The shawls here were all really expensive, but it’s a tourist area, so that’s to be expected. I found one I liked and the guy working there helped put it on me. But we kept going back and forth on the price, but I eventually gave him 380 rupees/$5.02 USD for it. The guy definitely was trying to rip me off, but it’s all good. My head felt a lot better as we left and headed down the stairs to the beach. 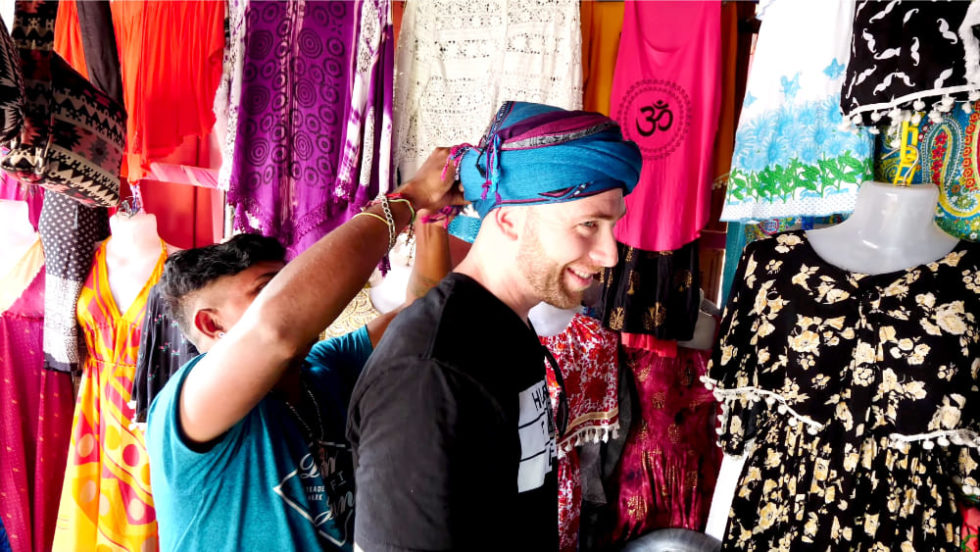 It took less than a minute to reach the beach. The beach was a beautiful and really beach. I was surprised that it wasn’t crowded at all. The best thing to do is walk to the water’s edge and look back at the cliffs, which are stunning. Vishnu told me that the cliffs get more jagged further down the beach. I recommend spending at least two nights here. The water along the shore is very shallow and there were lots of families there. There is a 2,000-year-old temple there, too! 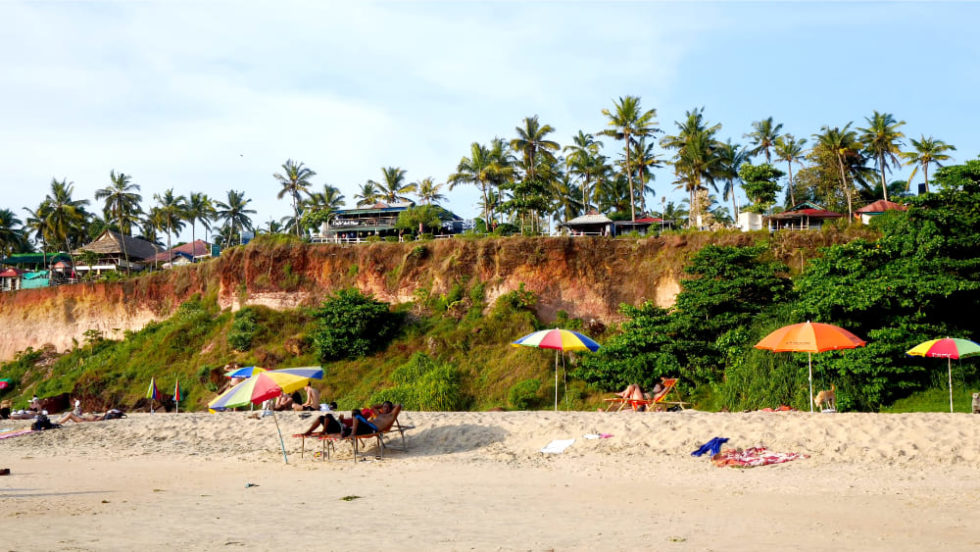 It was about 30 minutes before sunset, so we headed up to the temple by climbing some rocks and crossing a bridge to another boardwalk area. This side of the beach is past the cliff area. We hopped in a tuk-tuk and negotiated the driver to 60 rupees/$0.79 USD to take us there and wait 10 minutes for us.

Five minutes later, we arrived at Janardanaswamy Temple, which is dedicated to Lord Vishnu. It’s over 2,000 years old! I loved the music they had playing there. I took off my shoes and we headed inside. Inside the open-air courtyard was a large banyan tree. Inside the 2,000-year-old building is the idol, so you can’t take photos or videos of it. There’s a golden flagpole and a tree that has baby dolls hanging from it. People who want children hang a baby doll from the tree and pray for a child. Overall, it’s a beautiful, peaceful temple! 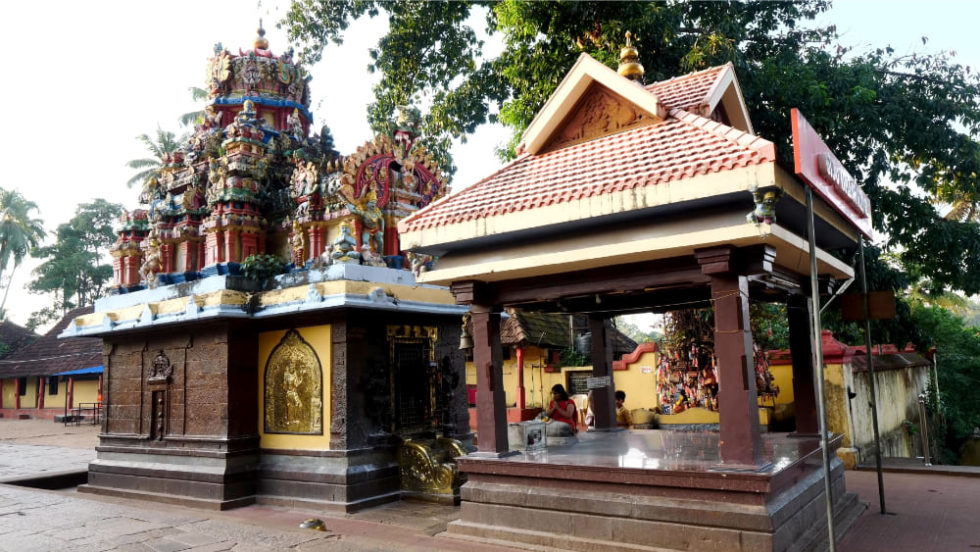 Then, our tuk-tuk driver took us back to the helipad area and the cliffs to catch the sunset. It was absolutely beautiful, despite the low clouds that prevented us from seeing the sun dip below the horizon. Then, we went to look for some street food! Vishnu told me that they make small dosas called tata dosas, which sounded amazing. We also had a surprise coming up! 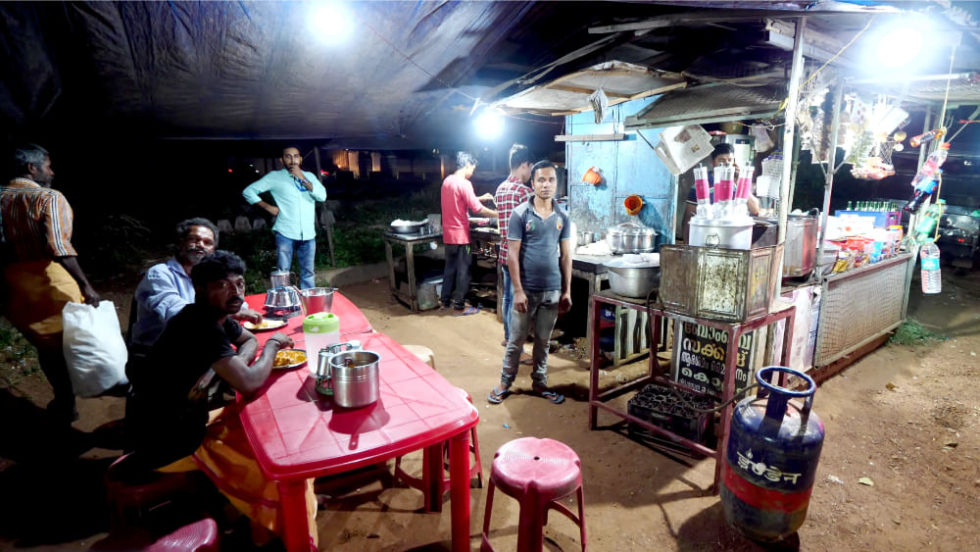 The dosa was fluffy and doughy, which is very different from a masala dosa, which is crisp on the outside and doughy in the center. The chutney had a nice amount of spice to it, just the way I like it! It was like a delicious, savory pancake made from rice and lentils. I was loving this Indian street food on the streets of Kerala! 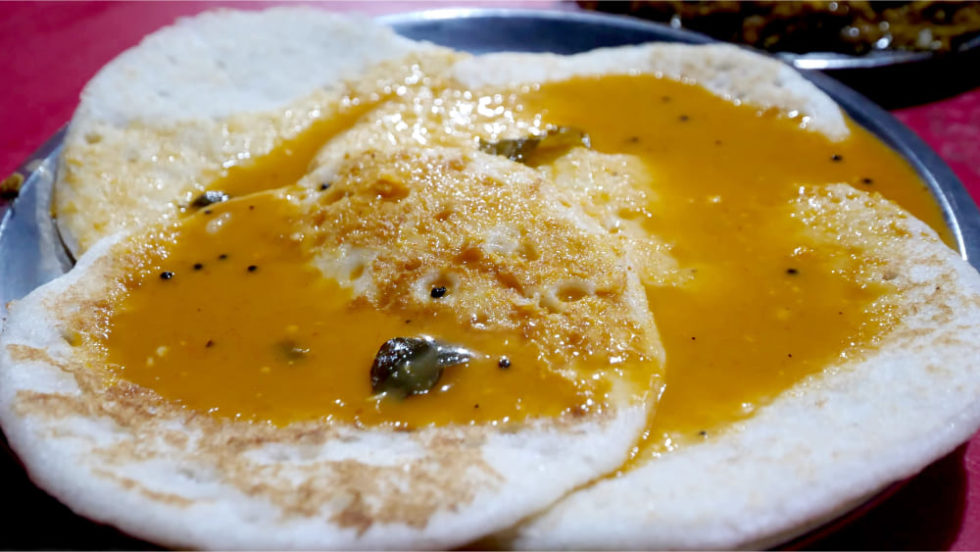 Then, I tried the puttu, which contained beets! First, I bit into it, then I mashed it and tried it with the chicken thoran. It was like a dense, flaky, steamed rice with nice, shredded beetroot. The chicken thoran is chicken with coconut and masala. It was spicy! It was a harder to pack it together than it would have been with regular rice, but I really liked it!

Then, I added an omelet to the dosa. I tried the omelet by itself first, and then had it with a piece of dosa. It was a really nice combination! The omelet was spicy and contained onion and chilies. I loved mixing the fluffy dosa with the omelet. The texture contrast was fantastic! This meal was like mixing breakfast and dinner on one plate! In all, we spent only about $1 USD there. 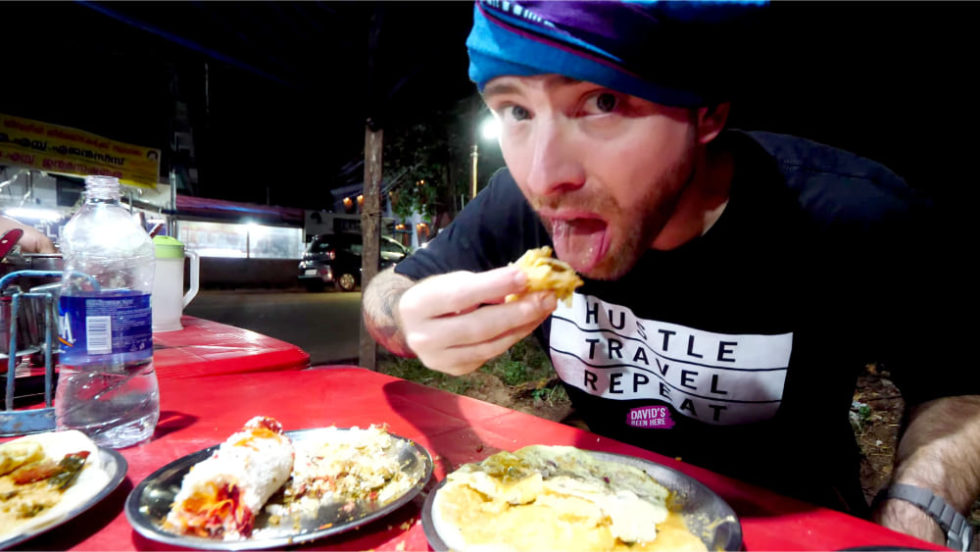 Then, we headed off to Kuttikkattil Bhadrakali Devi Temple, where there was a festival going on. Elephants take part in it! As we approached the temple, I could see lots of lights and hear music blasting. The lights are to show the pilgrims the way to the temple. On our way, we spotted a float that was painted and lit up! 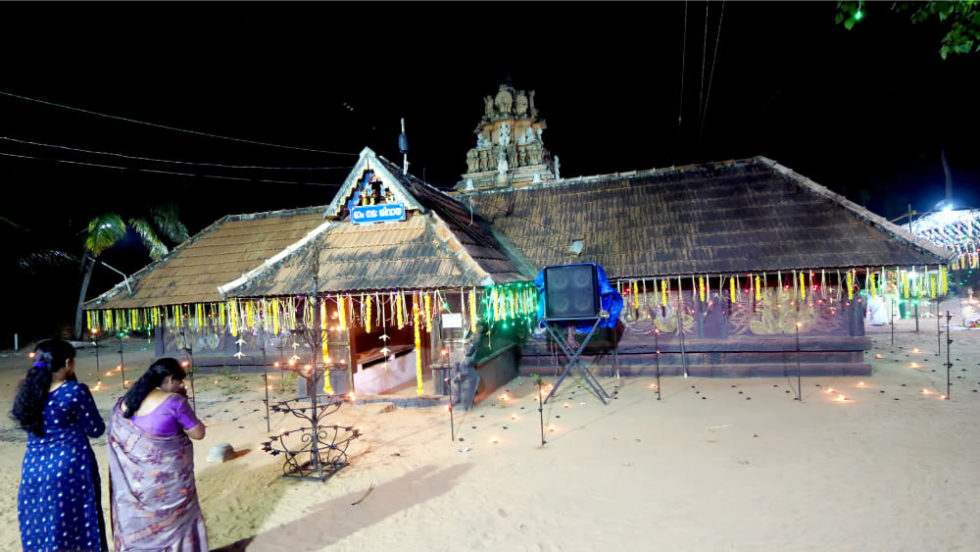 We arrived at the temple, where we saw elephants adorned in decorative costumes in the parade. There were also people offering rice plants and coconut flowers for prosperity. There was a guy who takes the offerings and throws them toward the elephant, which wears an idol and represents the god. Somehow Vishnu and I found ourselves in the middle of it all!

As the festival went on, we watched drummers march down the path. In the temple is a banyan tree, like every temple. People were waiting in line, waiting to welcome Lord Shiva. It was pure luck that we happened to be there. We finished dinner just in time to make it to see it all go down! Seeing the band melam and the Chendamelam traditional performance was mind-blowing! After the festival, we ended our night with some chai.

What an outstanding evening! From Varkala Beach to the boardwalk to the Indian street food in Kerala to the festival, this was a day I will never forget. I was only 48 hours into my 10-day trip. It was already shaping up to be my biggest India adventure yet! Huge thanks to my boy Vishnu for showing me this beautiful part of Kerala! 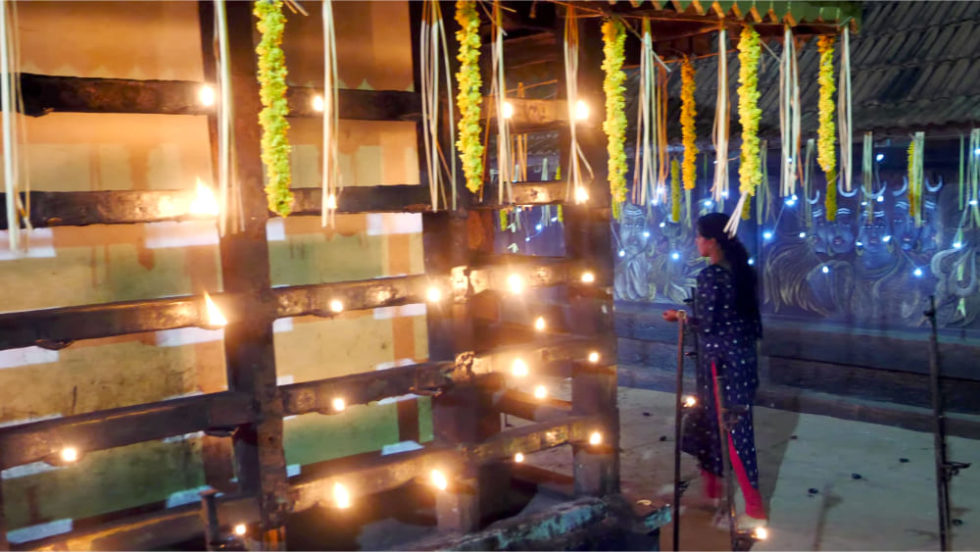 I hope you liked coming with me to explore Varkala beach, have Indian street food in Kerala, and visit the temples and festival! If you did, please give this video a thumbs up and leave a comment below. Also, please subscribe to my YouTube channel and click the notification bell so you don’t miss any of my travel/food adventures around the world!