My amazing sixth day in Kerala, India began at 7 a.m. as we left the gorgeous Thekkady area and made the 70-kilometer drive to the city of Munnar. Along the way, we ate tons of amazing southern Indian food. Come along with me as I share my first impressions of Munnar, the tea capital of South India, in Kerala, India!

My morning began in Thekkady, but my guide Ebbin and I would soon be driving three hours north to the Dream Catcher Resort in Munnar. Munnar is the most famous place for southern India for tea. They have lots of tea plantations there, including the highest one in the world. It’s also a popular honeymoon destination! I couldn’t wait to get to Munnar and try some of the best tea in Kerala, India! 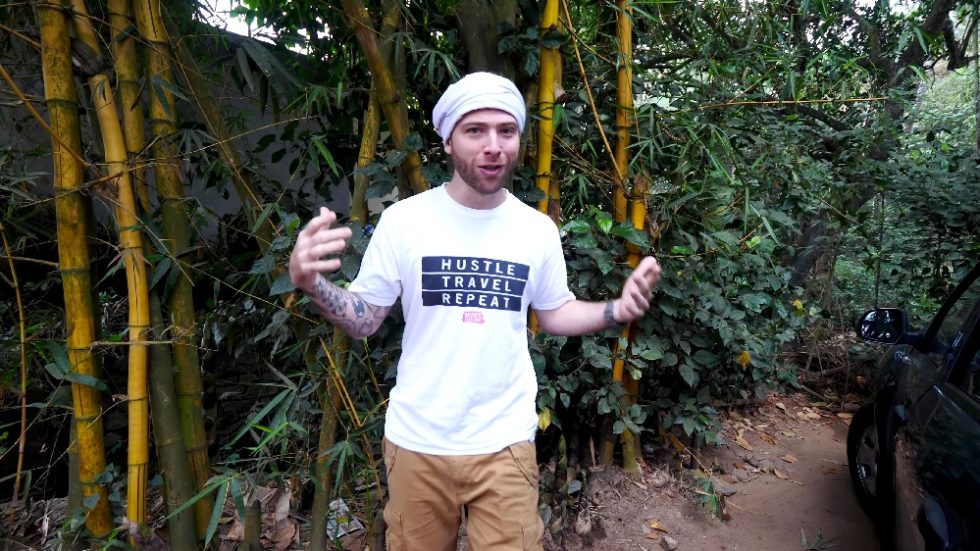 We left Kumily and passed along the winding, vegetation-lined road. It goes through lots of mountains and forests. On this particular day, it was super foggy, so we left a little later than usual. Driving through the fog in the dark is really dangerous and it wouldn’t have been worth the trouble. 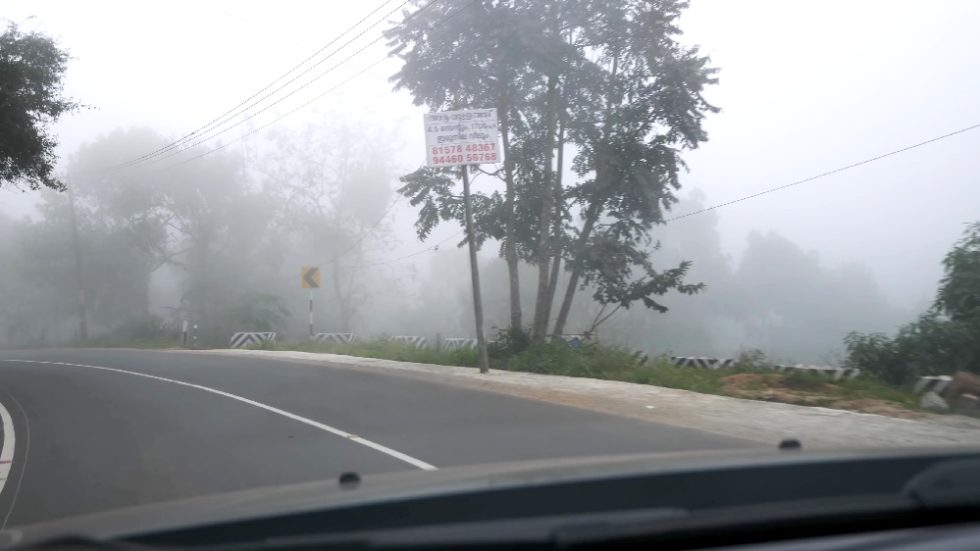 I was hoping to see some animals and towns on the way to Munnar. At the base of the mountains we were driving through is the state of Tamil Nadu. There, it’s really hot and the scenery is very different from what you’ll get up in the mountains of Kerala. Ebbin was a pro at handling the fog.

Check out my VIDEO: South Indian Cooking – How to Make Idiyappam & Dosas in Thekkady, Kerala, India

As we continued on, we passed by some cardamom plantations, which also had trees with pepper vines. It was a never-ending sea of cardamom, pepper vines, tea, and coffee! After an hour or so, we hadn’t seen any tea stalls or food spots, so we stopped at VM Cool Palace to soothe our throat with some chai! 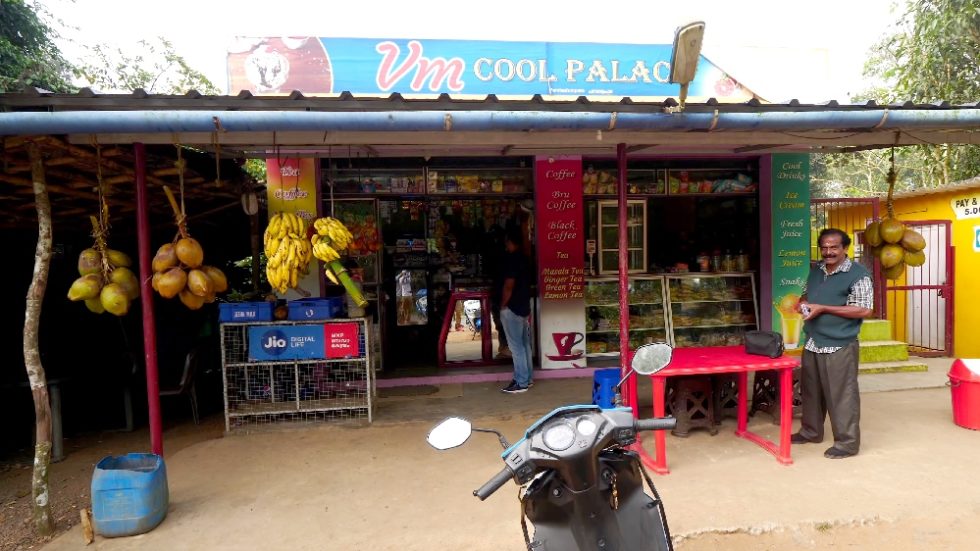 We also got some spicy cookies, which had some really nice masala in it. It was dense and wasn’t too spicy, and was like a really tasty and dense biscuit. I dipped the cookie into some chai. I loved it. What a cookie! This was a nice little spot to get masala chai, ginger tea, coffee, and these amazing biscuits! 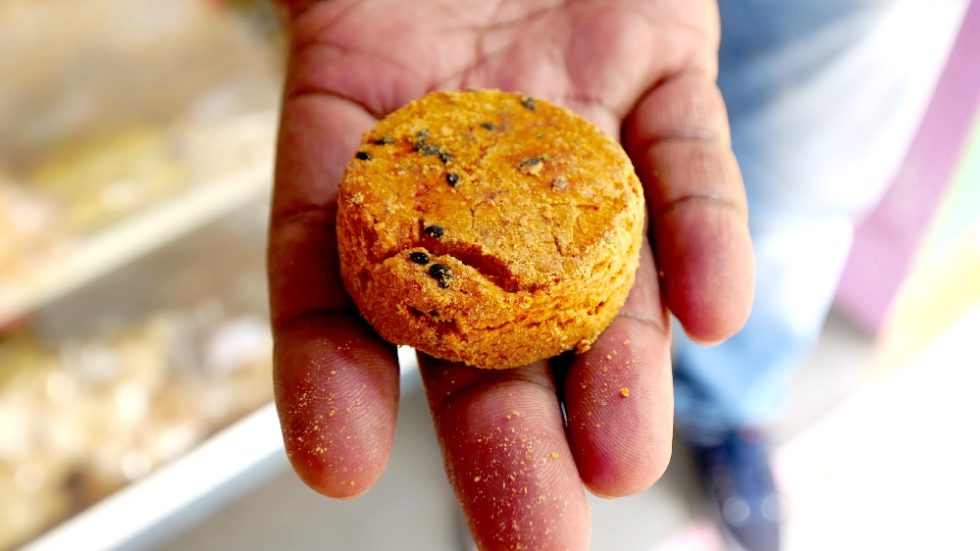 I got a second cup of chai. I could easily have five of them a day. The chai didn’t contain any cardamom or ginger, but the cookie contained ginger, masala, and sesame seeds. It cost 54 rupees/$0.71 USD for 3 cups of chai and 4 masala biscuits. I could have gotten a whole bag of biscuits for only 200 rupees/$2.63 USD! 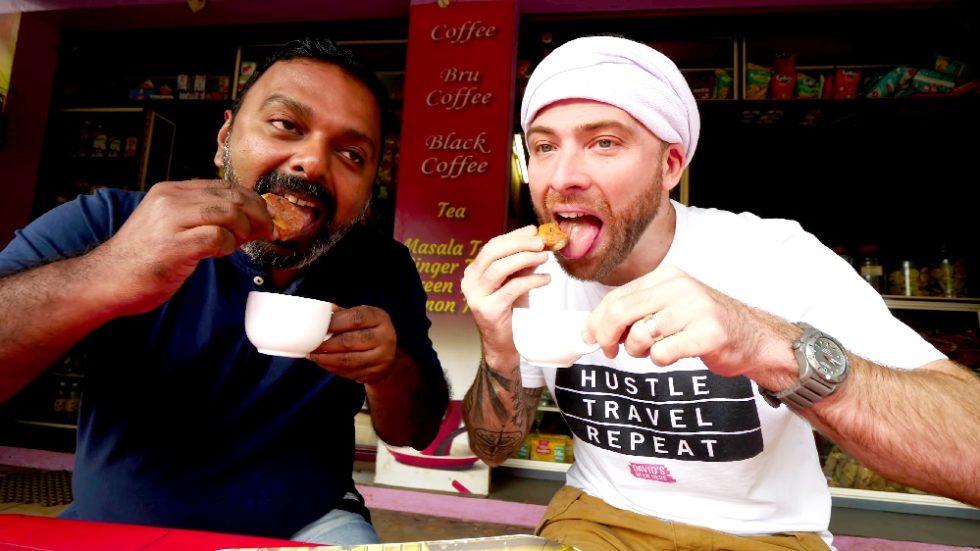 Then, we hopped back in the car and continued on to another junction, which is always located at the center of a village. They’re very concentrated and there’s always a lot of traffic. There are mosques, Hindu temples, and Christian churches in this part of India because of the diversity. This is one of the most diverse states as far as religion goes. Eighteen percent of the population is Muslim, 26% Christian, and 54% Hindu. Everyone lives in harmony. There’s tons of spicy food and super friendly people!

We entered another village about 45 minutes outside of Munnar. There, we found a restaurant next to a temple. There was lots of music playing in preparation for a festival the next day. 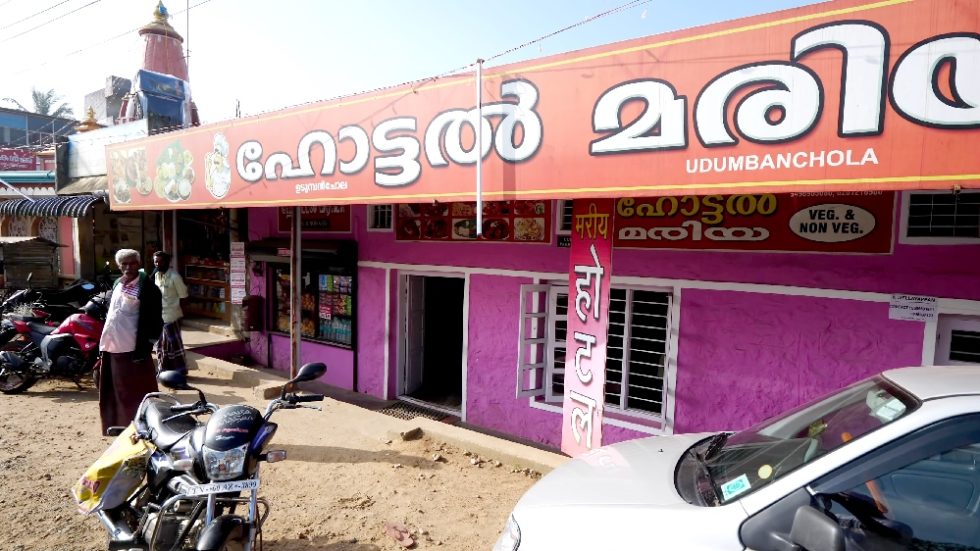 At the restaurant, we saw onion vadas and a lot more. Inside, the walls were painted pink. Their menu contained everything from vada to dosas to idli to chicken to biryani. The guy working inside pours the chai from a full meter high and catches it in the cup to aerate it. It’s incredible to watch and is called meter chai! 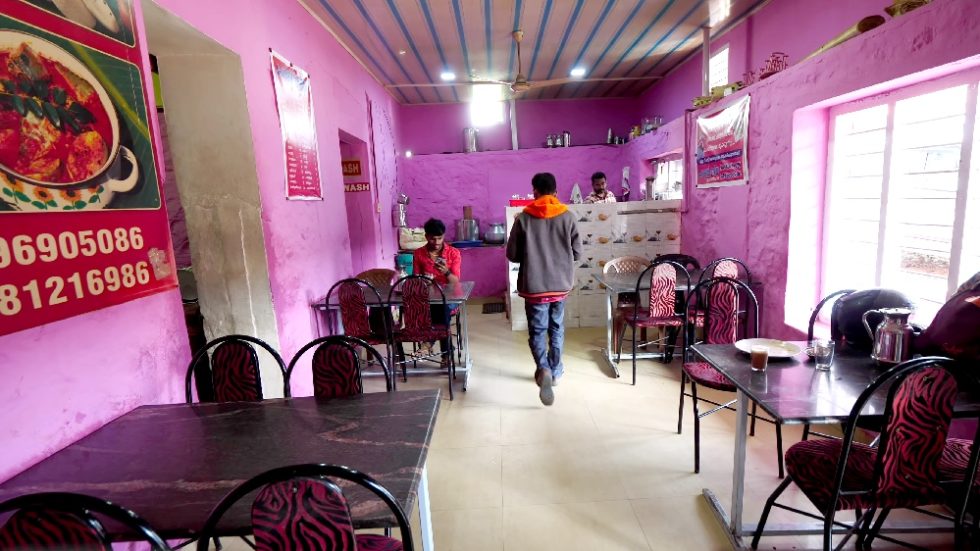 We got two vadas (onion vada and lentil vada), bonda, and sugiyan. Two were sweet and two were spicy. I went with one of the vadas first, which wasn’t too spicy and was crunchy and crispy on the outside with soft, fluffy dough on the inside. It was almost like pizza dough! Then, I tried the bonda, which was a hard ball with a tough, crispy exterior and a spongy, airy interior. It was super sweet and had to have contained a lot of jaggery or sugar. 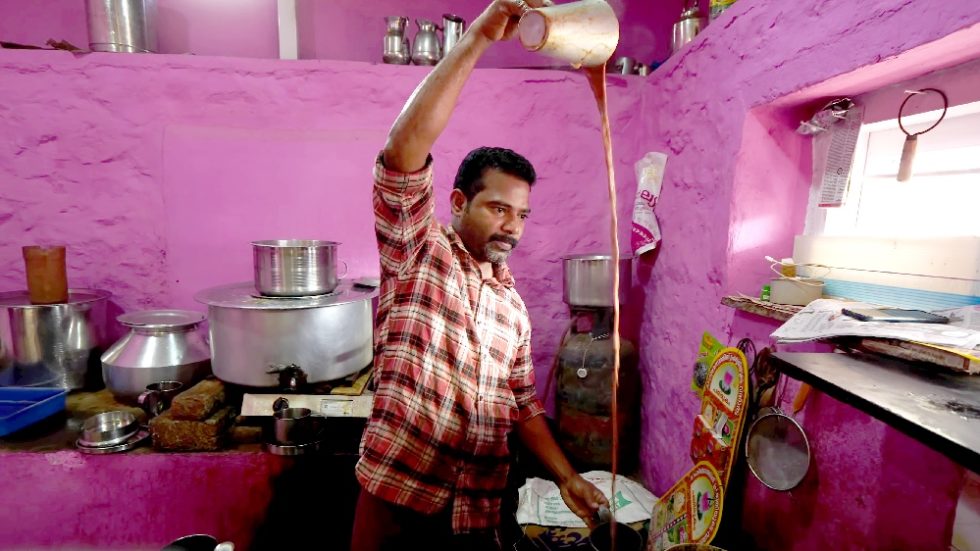 Then, I went with the lentil vada, which also contained corn. Vadas are almost like a savory Indian doughnut. They usually have a crisp exterior and are a popular breakfast item. This one was nice and crispy and felt very grainy. 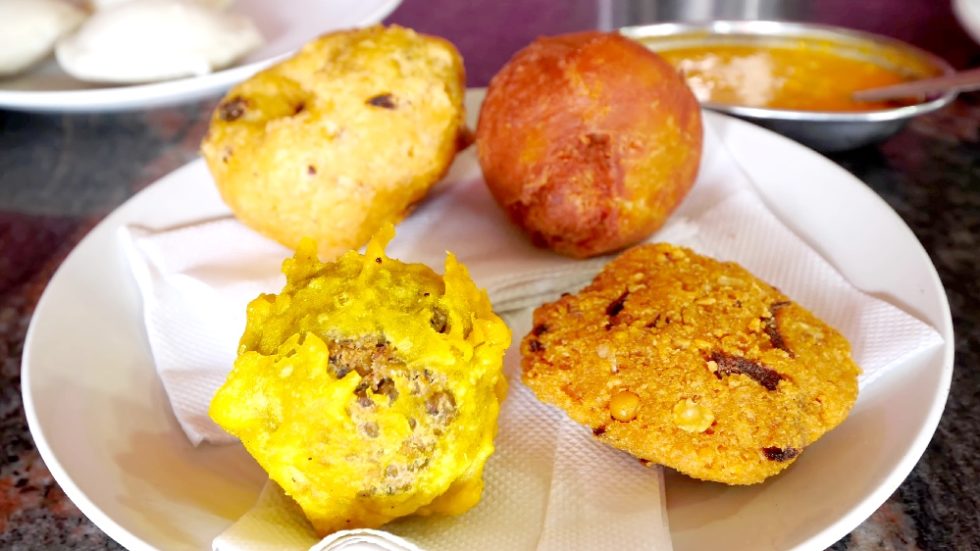 The lentil vada was fantastic. I loved the nutty, earthy flavor. It was excellent when I dipped it into the sambar, which had a nice kick of spice. I loved letting the flavors soak into it. 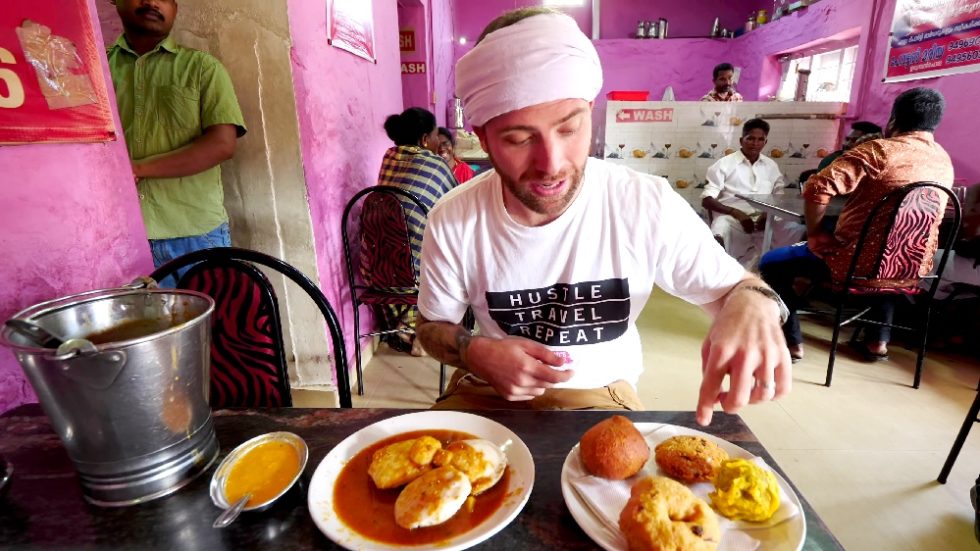 Finally, I tried the sugiyan, which had a fried batter on the outside and contained black gram and jaggery. It was flaky and really sweet! I loved the contrast of the sweet and crispy. Then, I dipped it into the sambar. It was still sweet even with the sambar! I didn’t want to eat the whole thing since it was fried, though.

Then, I dove into our idli, which was harder than regular idli. It’s a steamed rice cake that’s made of a fermented batter of rice and lentils, the same as dosas. I broke off a piece and let it soak into the sambar before popping it into my mouth. It was a lot harder and harder to break apart, but it was still spongy and absorbed the spicy sambar well. 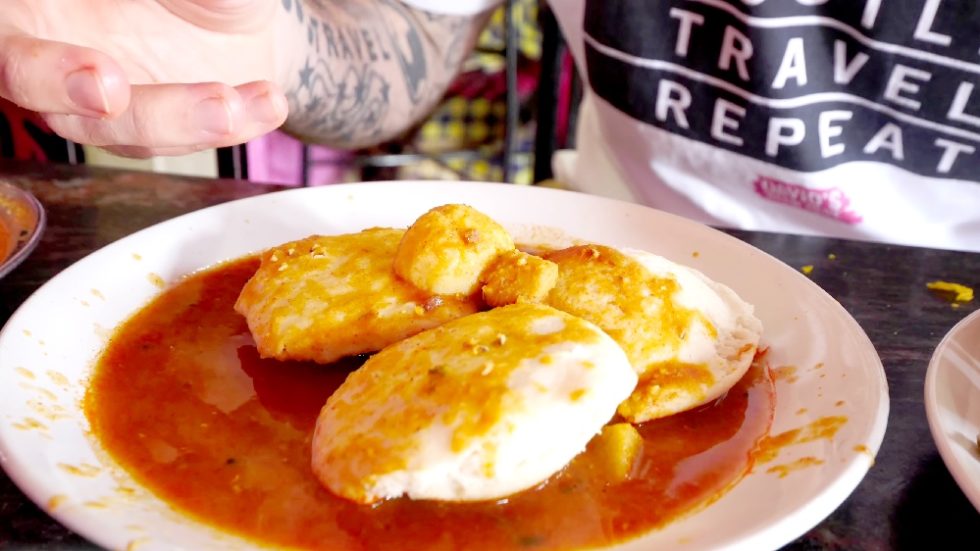 Next, I tried the idli with coconut chutney, which was super light on the spice and was full of pure coconut flavor. Kerala is known as the Land of Coconuts, and coconut can be found in nearly every dish! I let the idli absorb as much of the coconut chutney as it could. It was too good! 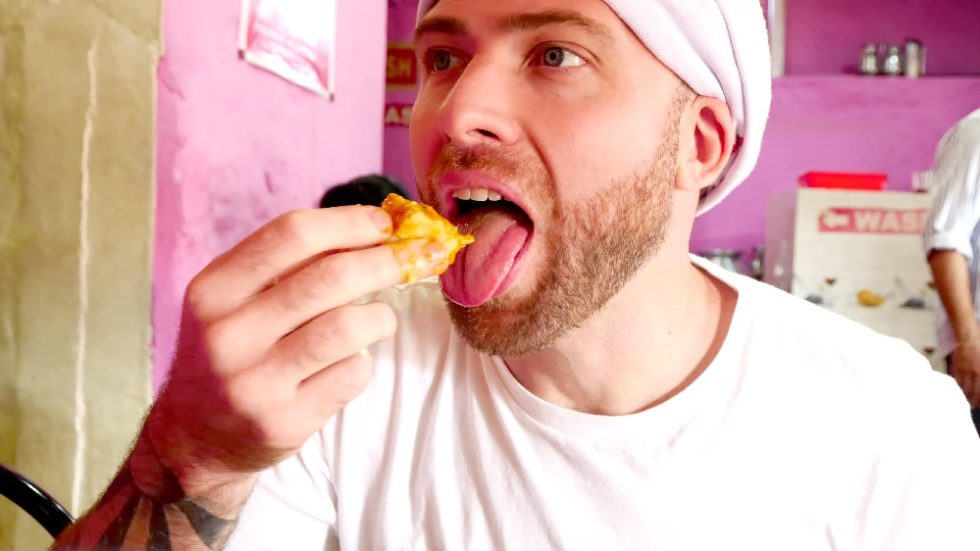 I also tried a potato, which was just OK, and then went back to the idli. Amazing. This is how you should experience southern India. Visit local spots and eat the food. It’s super affordable and delicious! I’d never had a hard idli before, but it was sensational. 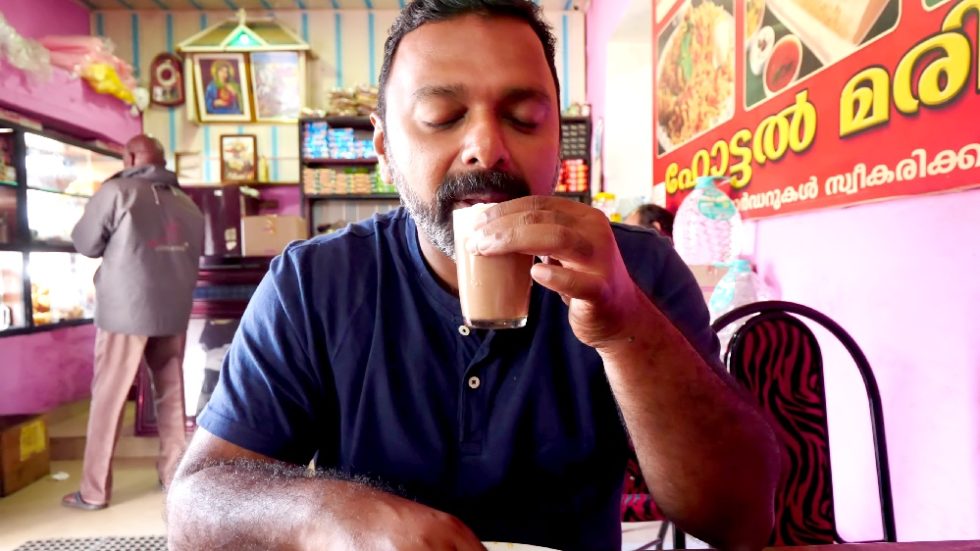 Then, I mixed the sweet desserts with the coconut chutney. What a sweet and amazing breakfast. Then, I had some of the meter chai. It had a nice head of foam on it and was nice and milky. It also had a stronger flavor than the chai we’d had earlier. I couldn’t wait to try the chai in Munnar since it’s the tea capital of Kerala, India! 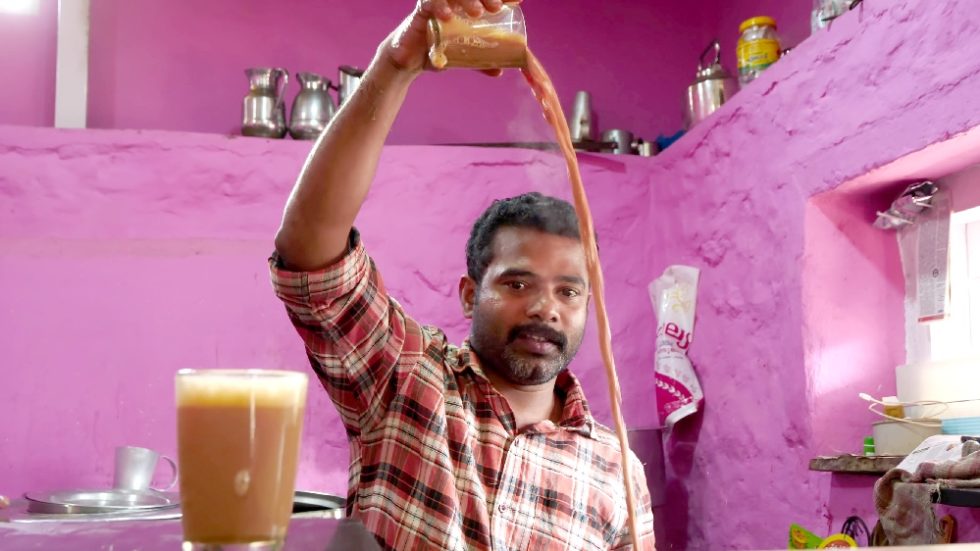 Back outside, we headed over to the small Hindu temple. Music was still blaring. The festival had happened yesterday, so we couldn’t see much. But there was a man making garlands out of the offerings of flowers. I had to dance to the music a bit!

Then, we saw some coconuts and sugarcane for the festival. Then, as the sun continued to climb and the temperature rose, we hopped back in the car to continue our journey to Munnar. We were only 45 minutes away and it was only 9:30 in the morning. 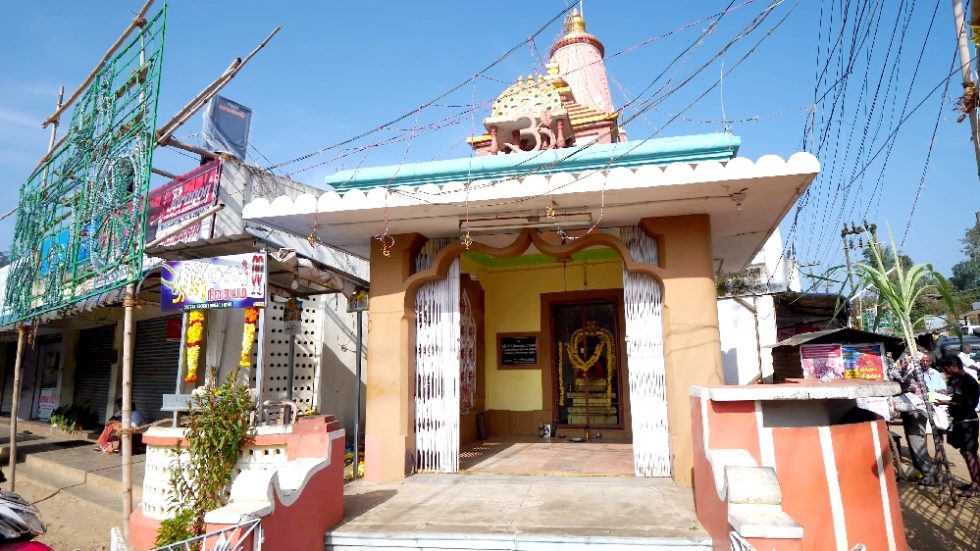 Ten minutes outside of the town, the road got very rocky and full of potholes. Because you have to go down the road slowly, it would take us longer than the estimated 42 minutes to get there. We stopped when I spotted some people working on some coffee beans. They were so kind and gave me a whole stalk of coffee beans as a gift. 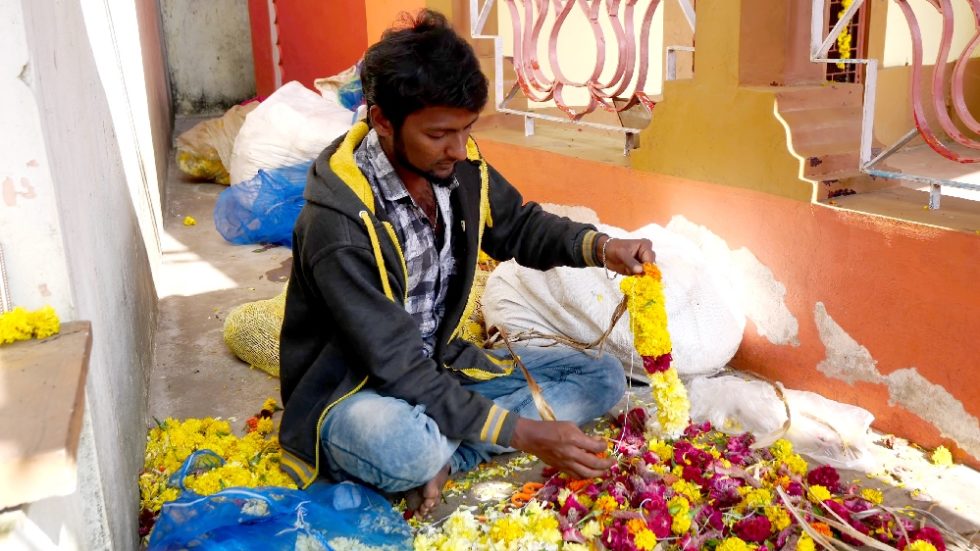 Ebbin tried some of the beans and told me that the fleshy part can be sweet. With another 30 minutes to go, the road got much smoother and less winding. There were banana trees to the left and right, and we passed a lot of cassava farms. There were lots of trees but the land was flatter. We were atop the mountain and there were more of them coming up! 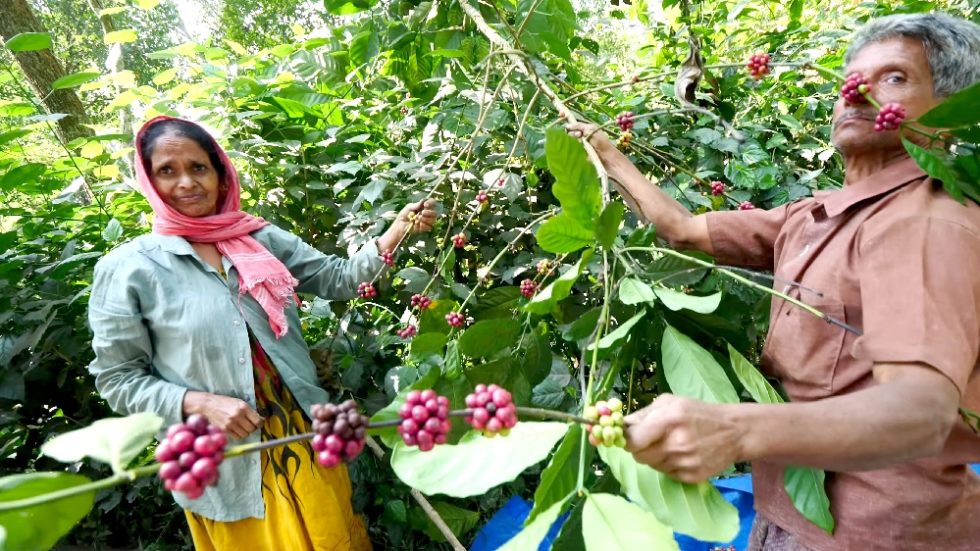 We headed up a steep road. These roads are only meant for one vehicle. This is the road to get to the hotel, not to Munnar. Along the way, we passed cacao and rubber trees. They had to carve this road out of the earth here. I got out again to grab some nutmeg fruit from a plant, but it was super sour!

The hotel is really hard to get to because it’s up in the mountain and the roads are so narrow, rough, and windy. I could see lots of tea plantations. Finally, we arrived at the Dream Catcher Resort, where we met some of the staff. They have a main building as well as treehouses. Ebbin and I would be staying in the treehouses! 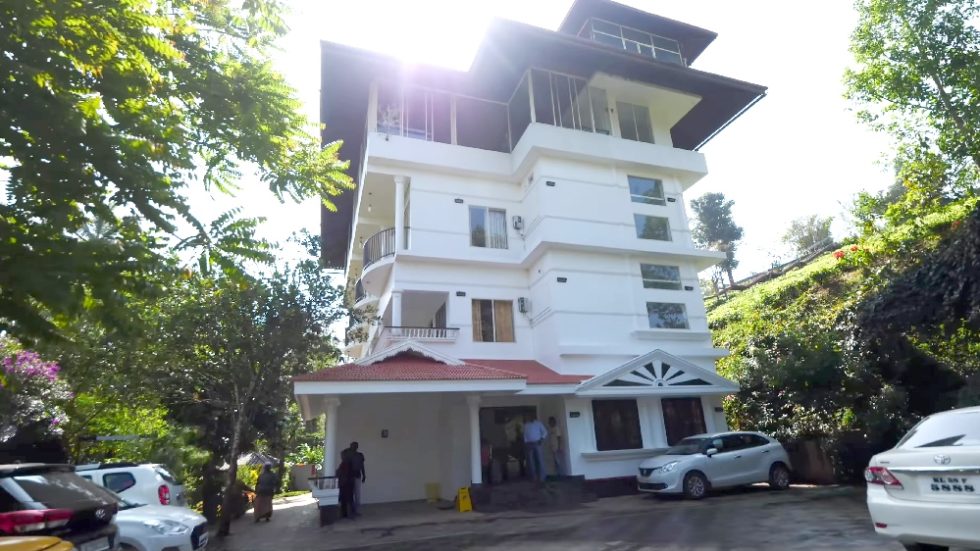 Inside the main building, they served us some delicious, sweet, and earthy herbal tea. It was also strong! After we checked in, I walked over to my treehouse, which was located inside the cardamom plantation. Ebbin’s treehouse, the honeymoon suite, was in the tea plantation. I passed by a lot of plant life and got a nice whiff of the clean air of Munnar. 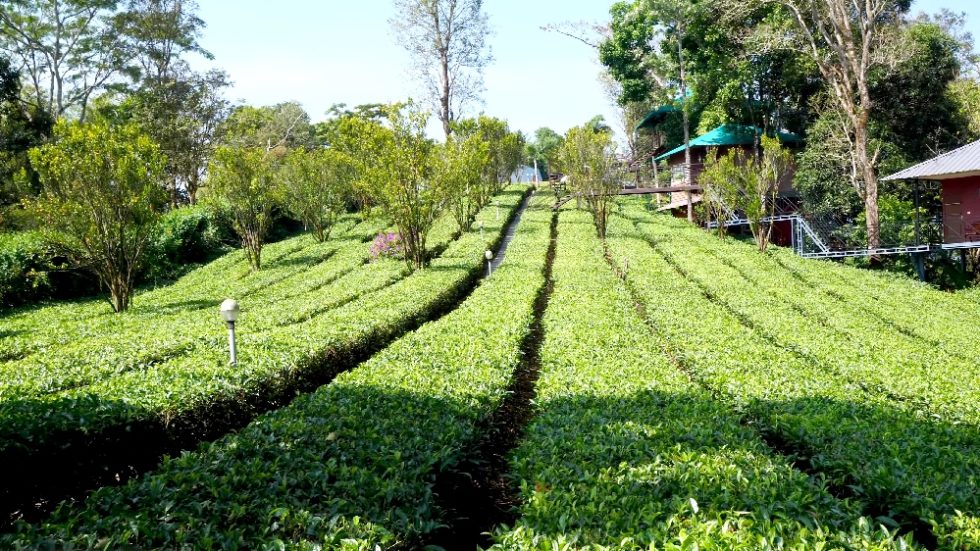 The cardamom had just been harvested, so there were no seeds. It was amazing to walk through the plantations atop the mountain. Then, we arrived at my treehouse. I was so excited to check it out! There was a little gate in front of the stairs leading up. I couldn’t believe this was my room for the night. The view from the terrace was incredible. They had a table and chairs on the terrace. Then, I went inside. 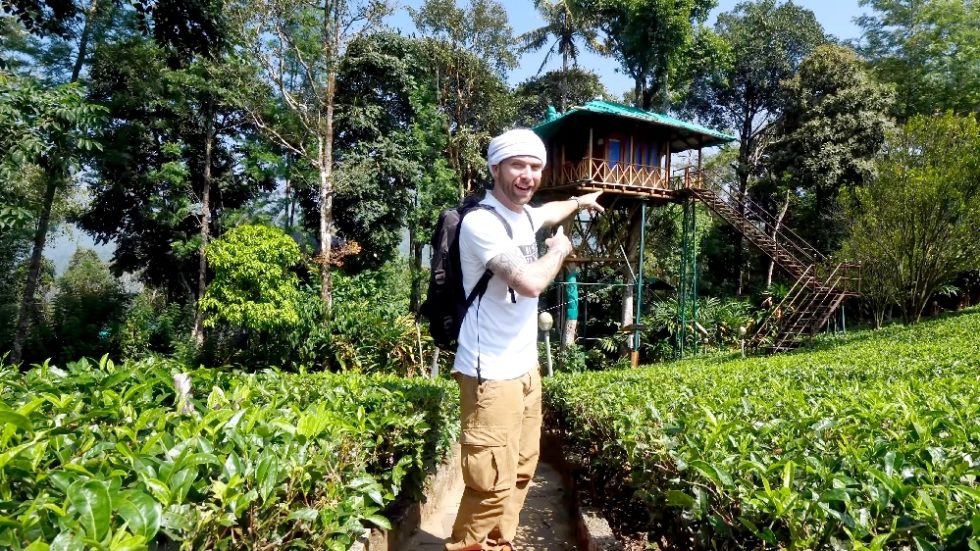 The treehouse had a huge king-sized bed inside and a comfortable bathroom. I had huge windows I could open to let in tons of light and an amazing view of the tea plantation below me. It was to die for!

What an amazing morning driving from Thekkady and sharing my first impressions of Munnar, the tea capital of south India in Kerala, India! I was loving this place already! 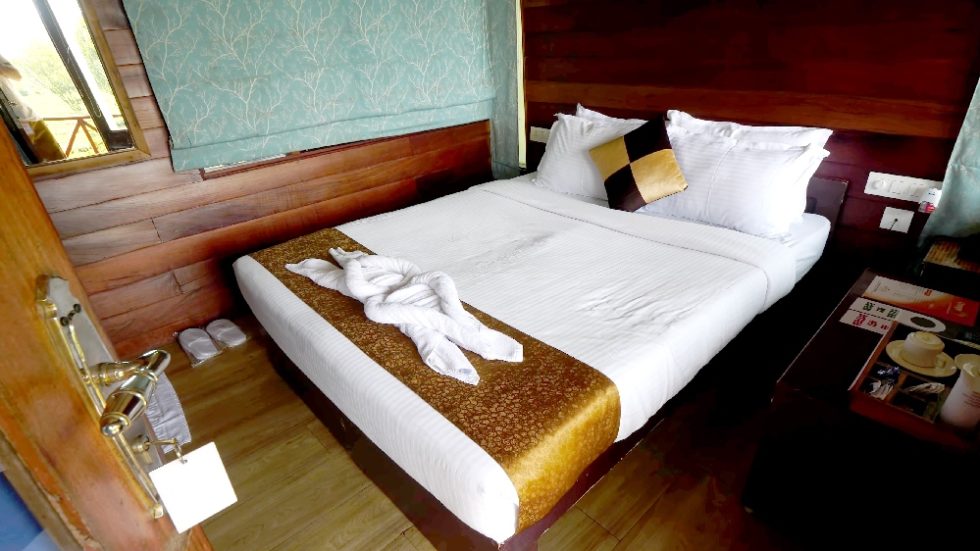 Huge thanks to my boy Ebbin for bringing me here. Be sure to subscribe to his YouTube channel and follow him on Instagram. I also have to thank the incredible staff at the Dream Catcher Resort for showing us such amazing hospitality. You should definitely book with them during your time in Munnar! Check out their website for more info! 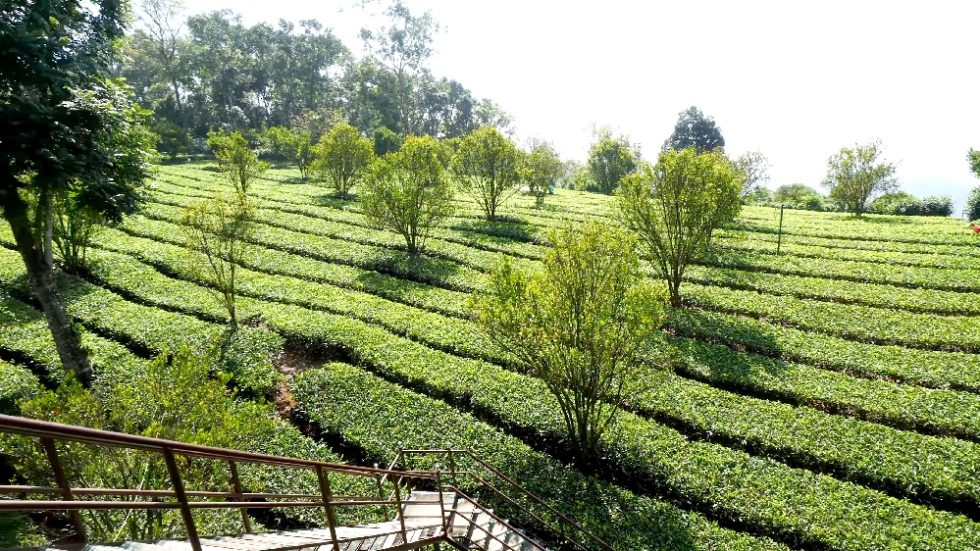 I hope you liked coming with me as I shared my first impressions of Munnar, the tea capital of south India in Kerala, India! If you did, please give this video a thumbs up and leave a comment below. Also, please subscribe to my YouTube channel and click the notification bell so you don’t miss any of my travel/food adventures around the world!