My first day in Armenia continued with more exploration of the capital city of Yerevan! I wanted to dive deep into the food and culture there and visit some attractions to get a real feel for what Yerevan is about. Come along with me as I go on an amazing Armenian food and wine tour and go sightseeing in Yerevan! 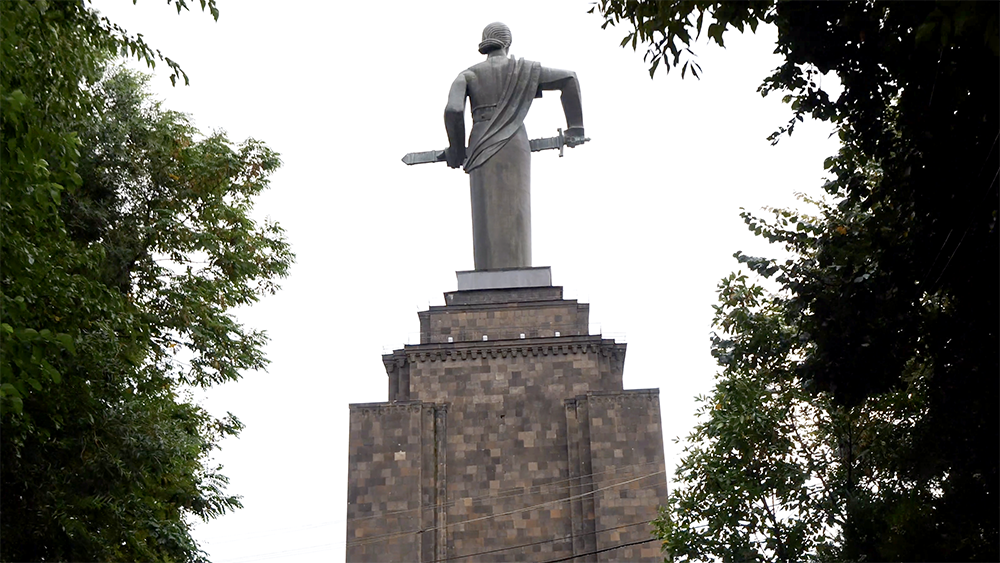 My adventure started at the Mother Armenia statue, a huge statue that serves as a female personification of the country. She is located at a viewpoint where you can see the entire city and Mount Ararat, which is located in Turkey and is where Noah’s Ark landed. 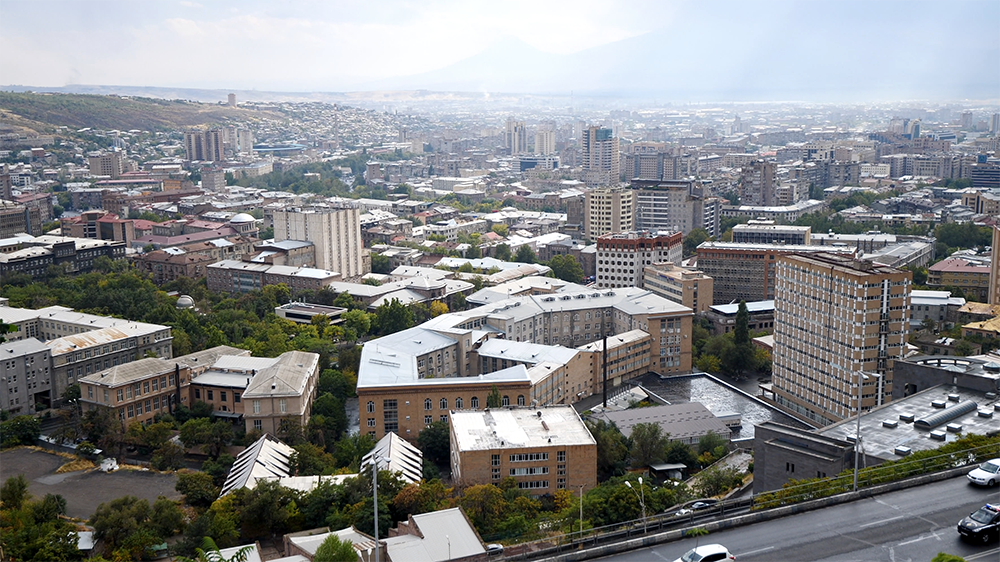 There are a few other points of interest at the Mother Armenia statue, including the Eternal Flame. It’s dedicated to the people who lost their lives in World War II. Armenia was part of the Soviet Union at the time. The views over the city are beautiful, even if it was raining in the distance, so I couldn’t see the mountains as clearly as I would have liked.

My guide, Gayane, showed me Victory Alley, the alley dedicated to the heroes of World War II. There are big plaques made of volcanic rock called tuff. On the plaques, the names of the heroes are inscribed in both Armenian and Russian. There are also grapes carved into the stone. It’s so beautiful! 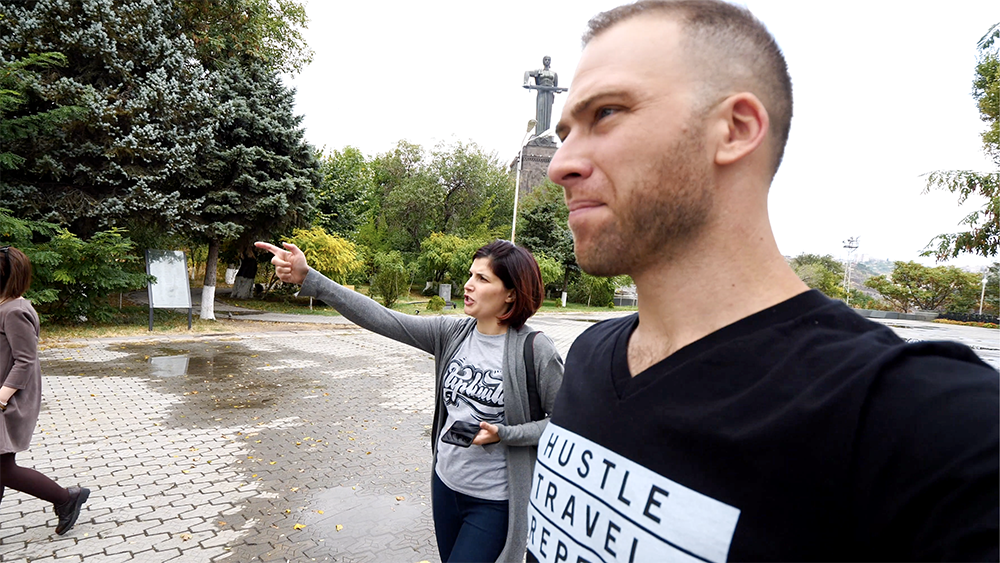 In the area, you’ll also find lots of Soviet machinery, including a huge divisional gun, a fighter jet, a missile, and a cannon. The statue itself is built in the Soviet style and still has a Soviet star on it. There’s a museum there as well, but it wasn’t open. 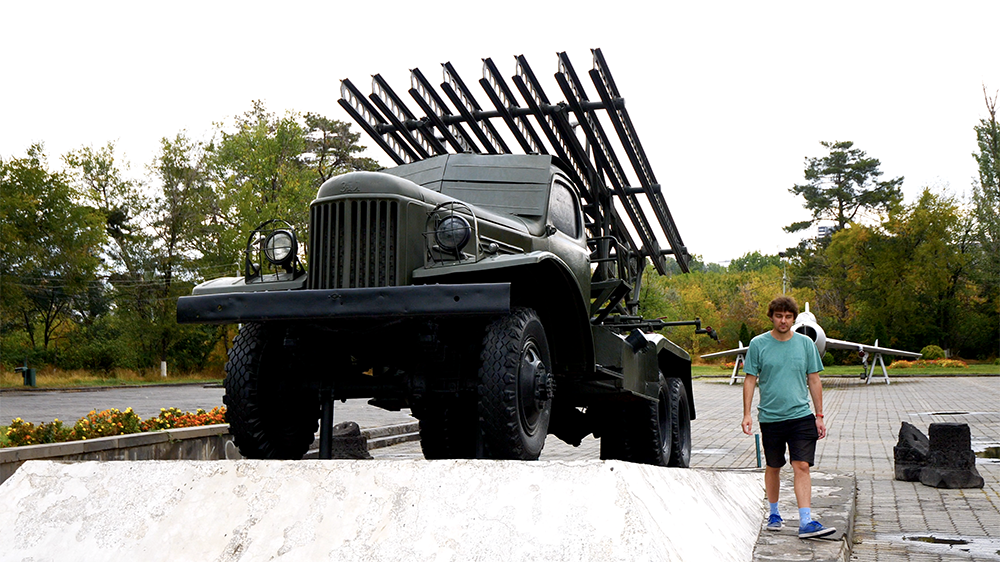 From there, we drove a bit and stopped at a statue of Alexander Tamanian, a Russian-born Armenian architect who is known for his work in Yerevan. There’s also an incredible monument called Cascade, which was made to look like a stone waterfall. There’s also a unique lion sculpture made of tires and a statue of a chubby Roman warrior by Colombian artist Fernando Botero from 1985. There are more pieces inside the nearby museum! It felt very European! 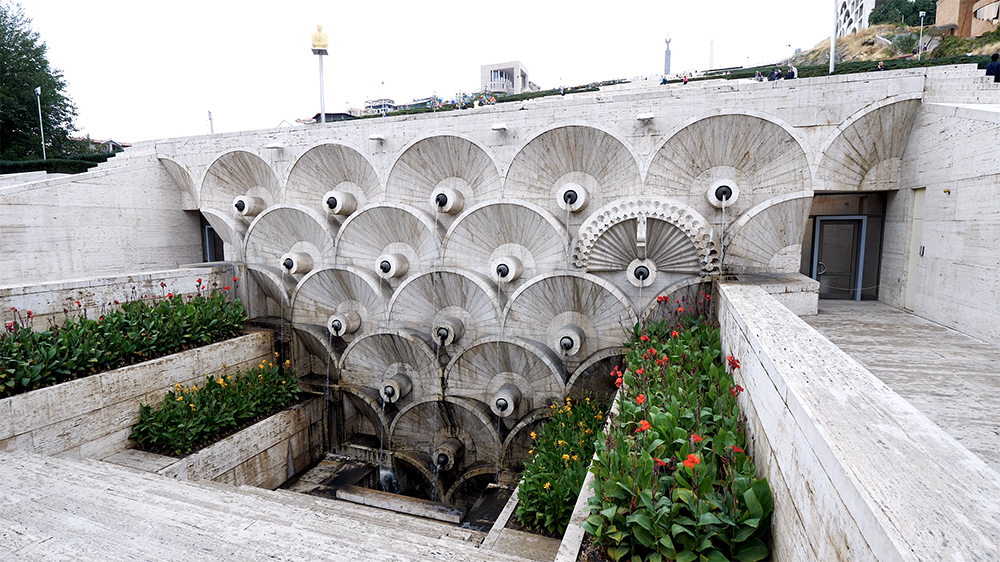 The Cascade has 572 steps. It’s really steep! It’s made of travertine, a type of limestone. It gets an ancient look when water and dirt get into the nooks and crannies, but the government cleans it every year. There are also beautiful fountains and sculptures there! It’s an empty, calm area that’s free of tourists. You can take an escalator all the way to the top.

Check out the 15 Things to Do in Belgrade, Serbia

There’s art throughout the complex as you ascend the escalators. At each landing, there are more outdoor plazas with art and fountains. At the very top are more epic views of Yerevan. It’s beautiful! There are lots of flowers up there. I wish I had brought a sweater. It was freezing out now! 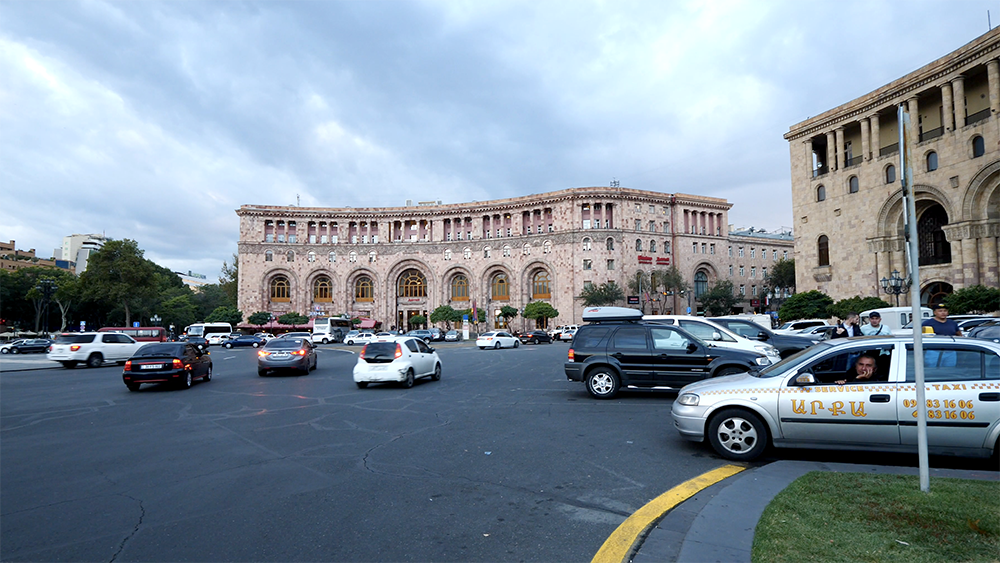 Then, we headed to Republic Square, a huge square in the center of town with government buildings and a singing fountain. We made it to Northern Avenue, a pedestrian street that connects the Opera with Republic Square. It reminded me of the main pedestrian street in Belgrade. There were lots of restaurants, shops, and retail everywhere. It was jam-packed with tourists and locals. 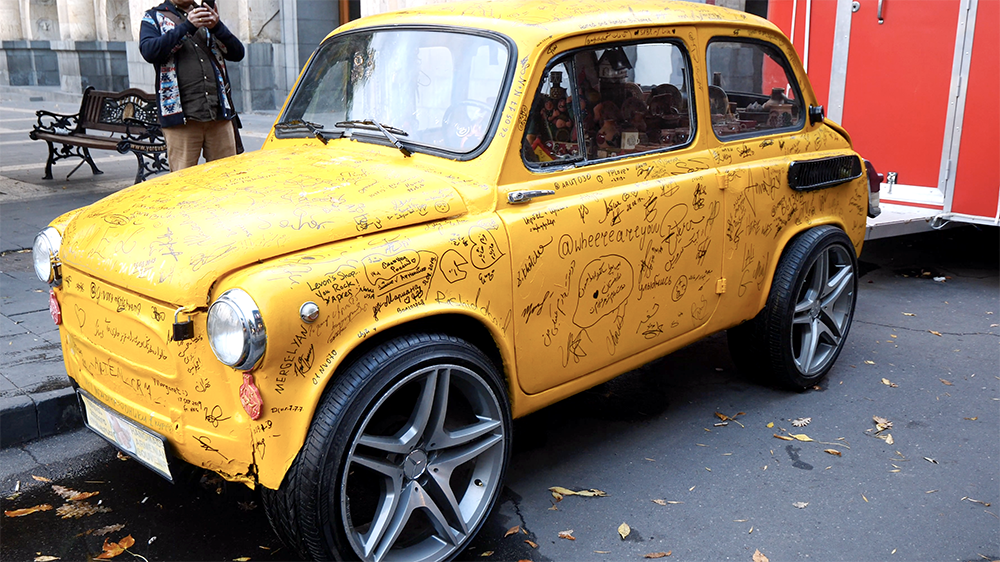 There’s a car there that’s also a souvenir shop! Inside are lots of figurines, cups, vases, and other items. Lots of people sign the car, so I did as well. 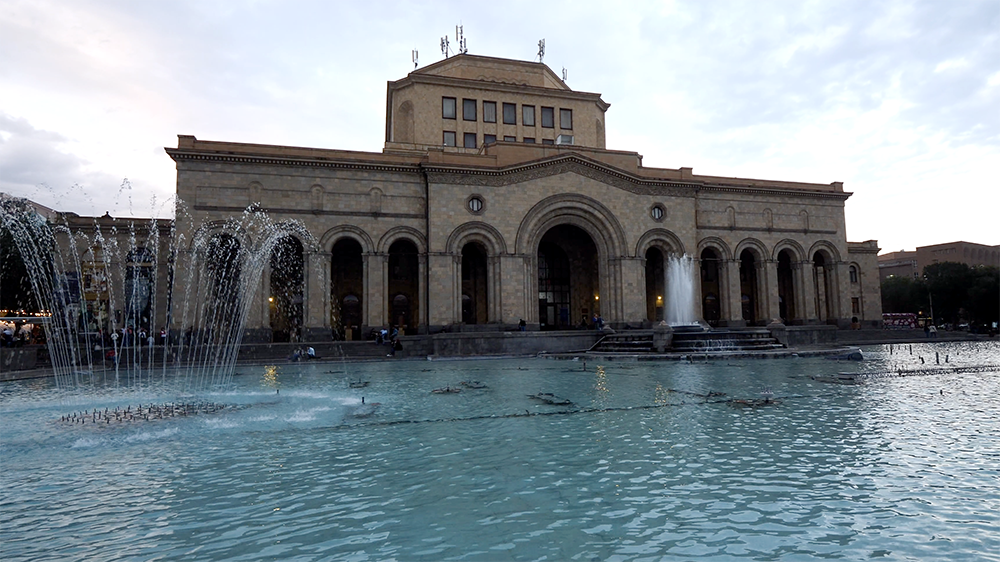 All around us were beautiful buildings made of orange and rose tuff stone. They included government buildings and the National Gallery. The fountains there dance with the music. Then, we headed to a famous wine street called Saryan Street, to start our Armenian food and wine tour of Yerevan! 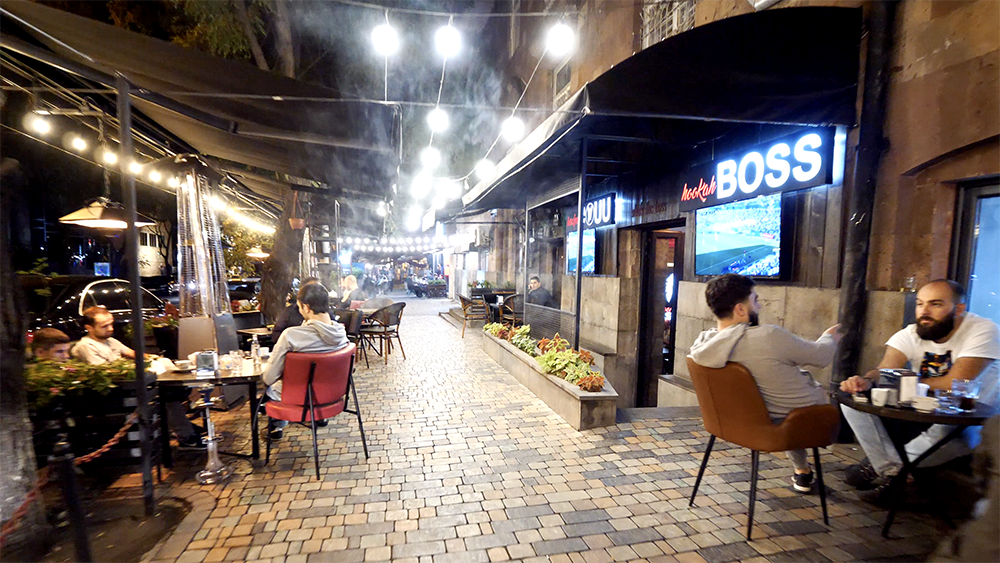 There were lots of wine restaurants and bars there, as well as hostels. The first wine place that opened there is In Vino. You can buy and drink wine there. One Wine Days, they shut down the street and have a festival! They have Old World and New World wines, as well as Armenian wines.

Check out The 4 Best Wineries in Moldova

I tried the Alluria, which is made from 2 Armenian grapes. It wasn’t sweet but was very different and had a good body. It was strong and I liked it a lot! 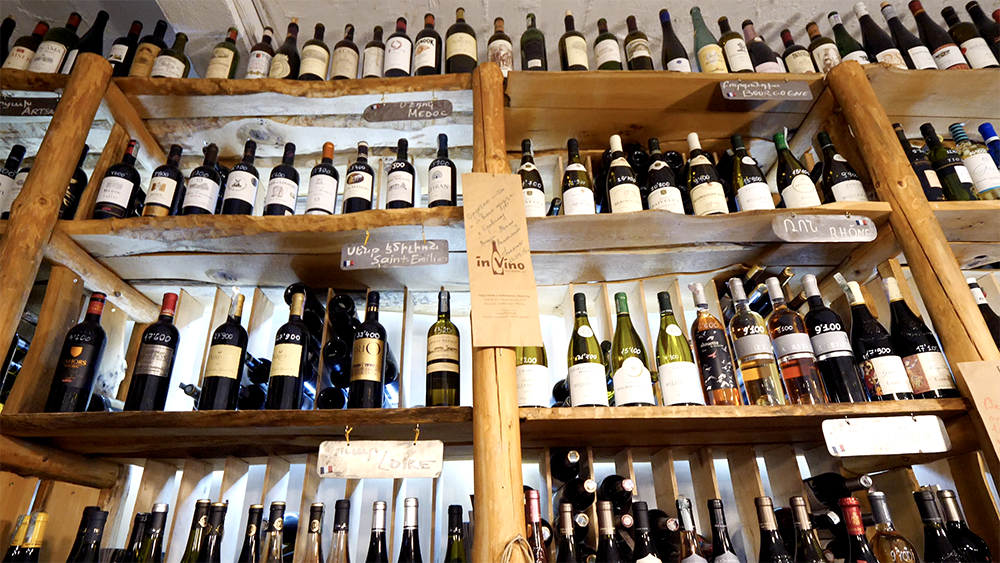 Next, we headed to Wine Time Restaurant. You can eat in a dining room or on the outdoor terrace. We ate in a dining room with lots of international and domestic wines displayed on the wall. 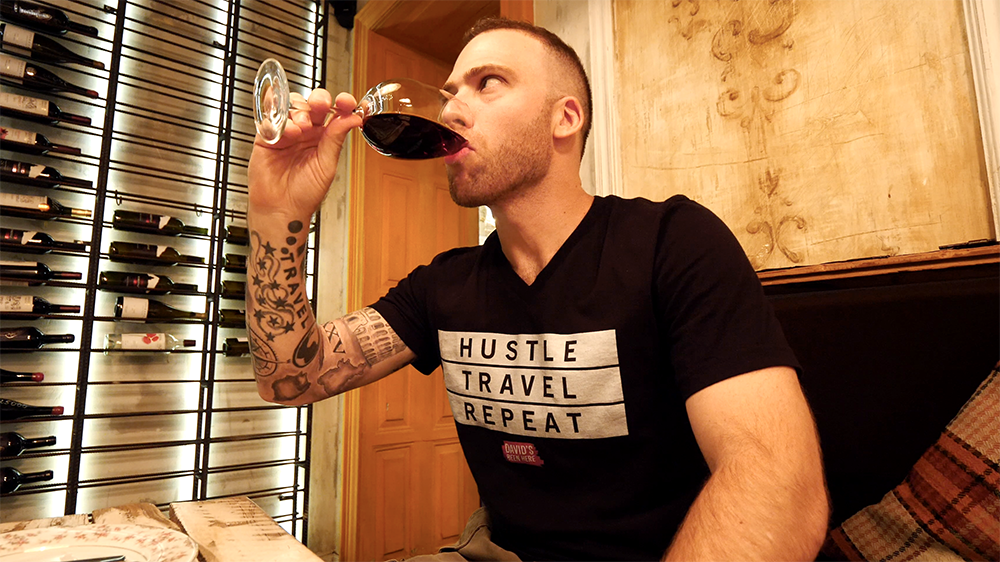 I started with a delicious, semi-sweet Voskevaz wine. It was much lighter than the first one. Then, we got some food! We started with beet root paste with chips, fig paste, grilled peppers with tomato, and dolmas. The dolmas are beef and rice wrapped in grape leaves. 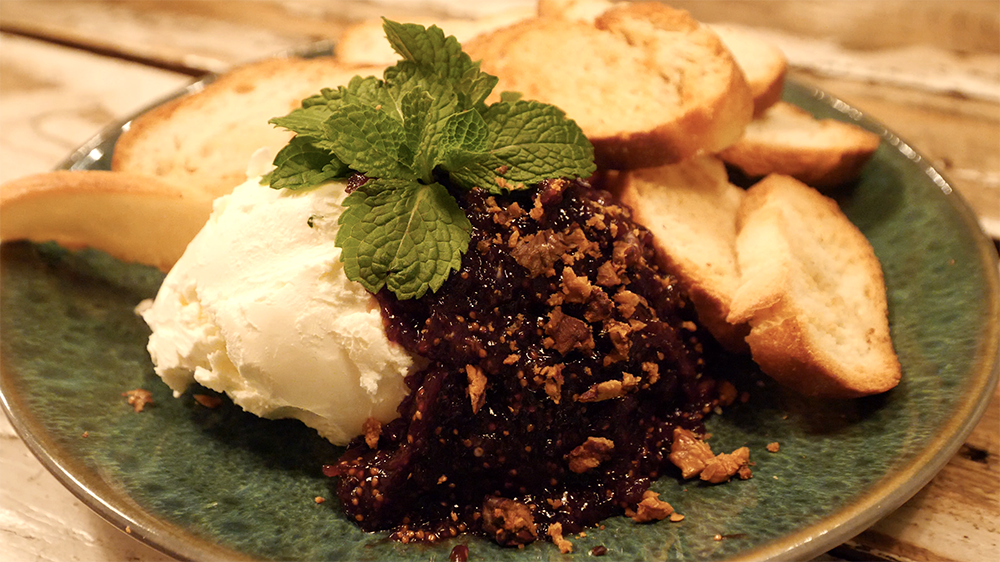 The fig paste on the crispy bread was almost like a jam. The beet root paste was really nice, too! I added sour cream to the bread with some fig paste. It had a nice balance of sweet and salty. The dolma with sour cream had more beef than rice, which I liked a lot. Then, I had eggplant, tomato, and a pepper with an Armenian sour cream called rejan. The eggplant with the rejan was amazing. It’s a dense cream and isn’t too buttery.

Check out Your Guide to the Annual Moldovan Wine Festival

I loved the flatbread with the beet root paste as well. It cracks easily, so you have to dig in to get it! Next was another Voskevaz wine, but it was drier. It was a lot better! Then, I had a delicious grilled tomato! 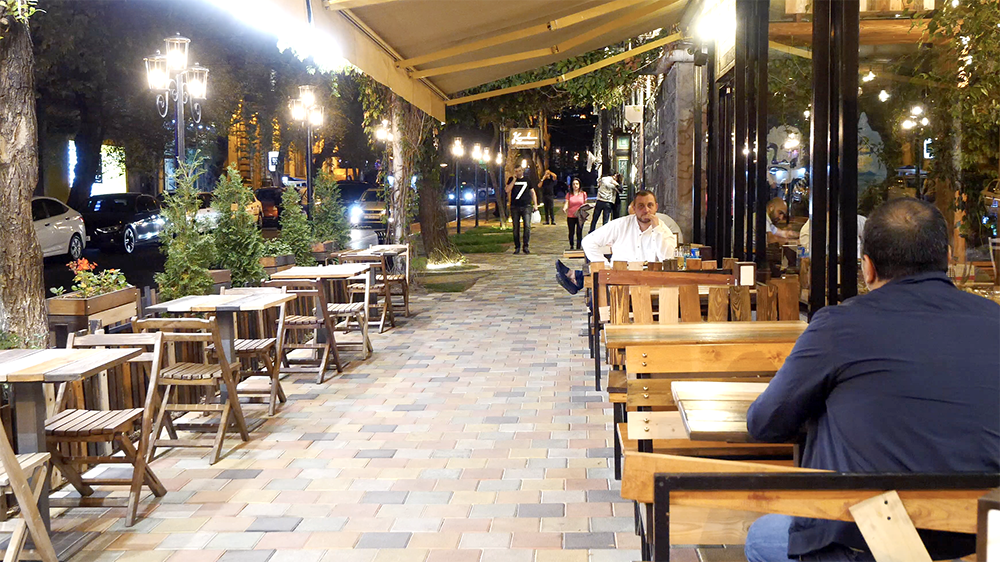 Next, we looked for another outdoor bar or restaurant to get some more wine. We stopped at Armat Café Restaurant, an open-air restaurant/wine bar. I had another super strong, full-bodied wine as a nightcap! 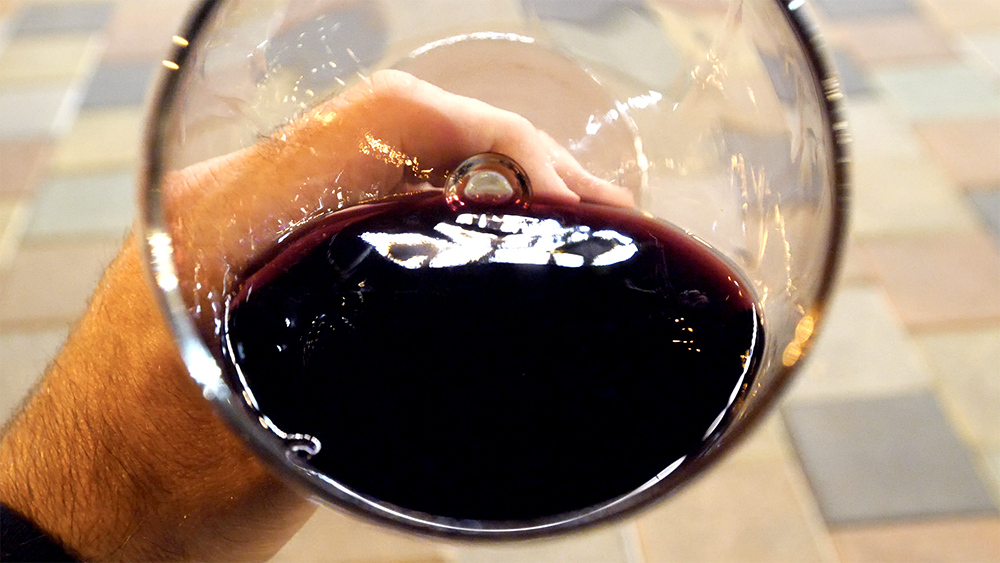 I hope you enjoyed coming with me on my Armenian food and wine tour in Yerevan! If you did, please give this video a thumbs up and leave a comment below. Also, please subscribe to my YouTube channel and click the notification bell so you don’t miss any of my upcoming travel/food adventures! 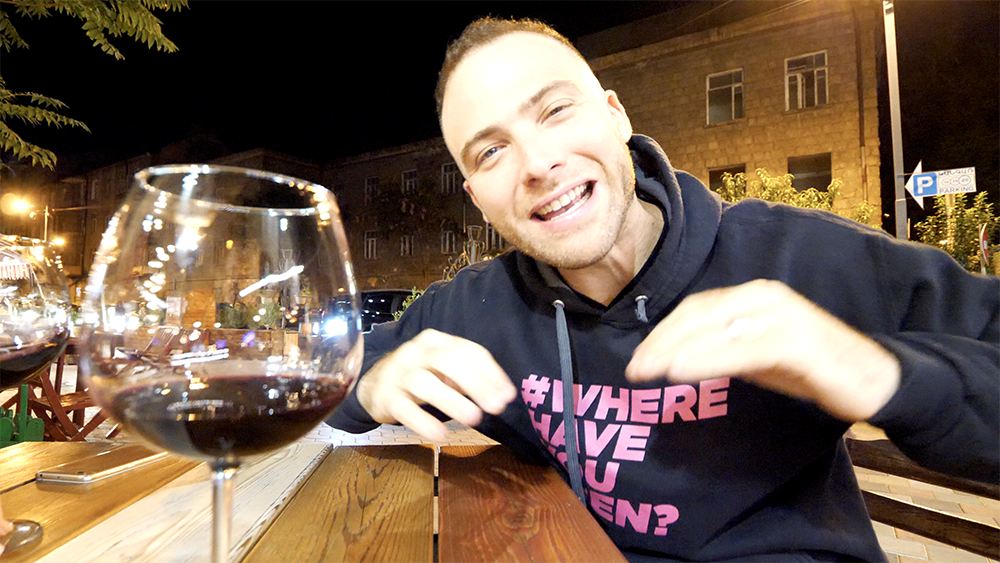