Located in Armenia’s Vayots Dzor Province, not far from the border with Azerbaijan’s Nakhchivan Autonomous Republic, is the village of Areni. This small, unassuming village and its surrounding area are noted around the world for their wine production. The practice of producing wine has been a staple in the area for over 6,000 years, and many of the things you must do in Areni, Armenia revolve around wine to this day. 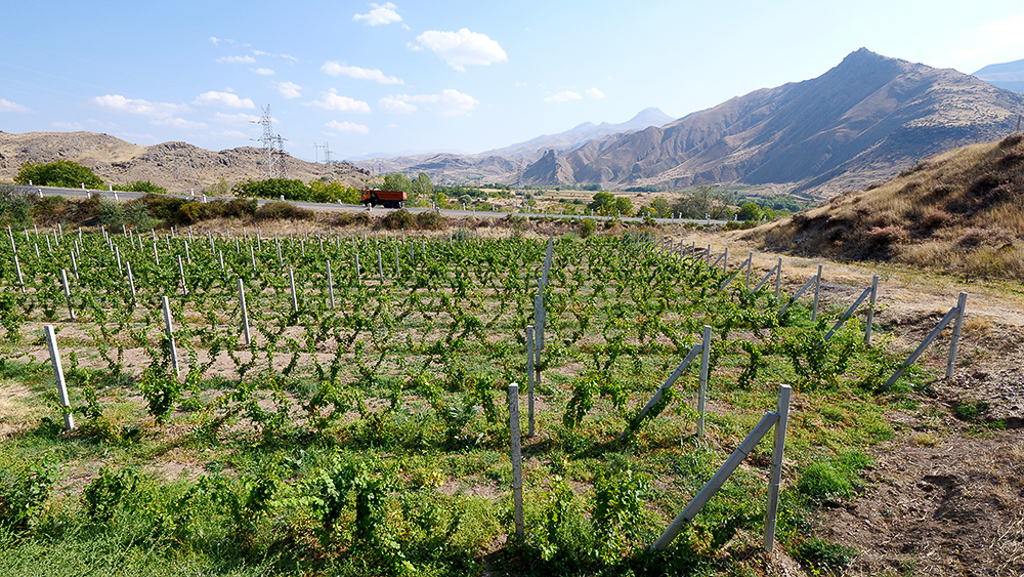 Even if you aren’t a big wine drinker, there are plenty of things you must do in Areni, Armenia. History buffs will have a field day at the area’s medieval Noravank Monastery, and history and viticulture fans alike will enjoy touring the oldest winery in the world! When you add in Armenia’s greatest wine festival and plenty of phenomenal Armenian cuisine, you get a diverse village that is a true treasure trove for travelers of all types. These are the 5 things you must do in Areni, Armenia. 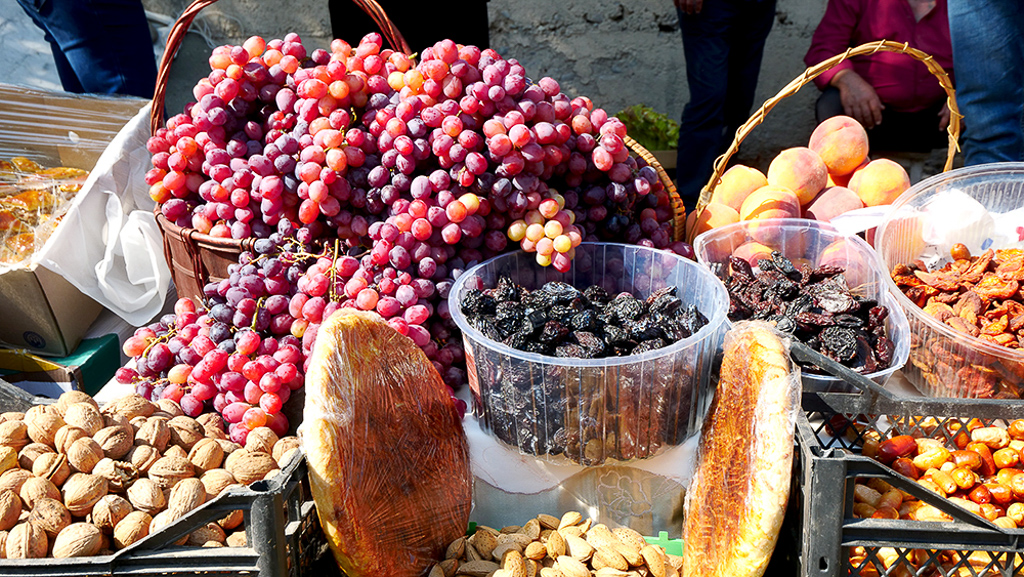 One of the top things you must do in Areni is visit the Areni Wine Festival. Held on the first Saturday of every October, this weekend gathering is more than your typical wine festival. It’s also a celebration of Armenian culture and food! Admission to the festival is free, but I recommend paying 2,500 Armenian dram (roughly $5 USD) for a special wine glass and coupons that will allow you to taste unlimited wines from the participating vendors. 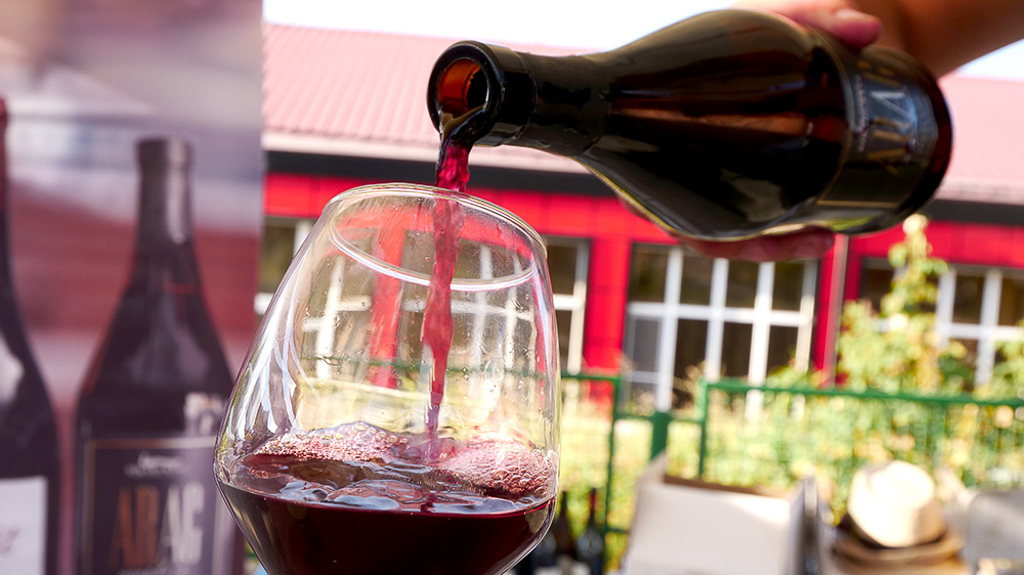 When I attended the festival in October of 2019, there were about 25 wine vendors from wineries and vineyards all over the country. Nearly every type of wine was represented, from hearty, full-bodied reds to light rosés to delicious, Albarino-like whites. You can also try a wide selection of fresh Armenian cheeses, witness traditional grape-stomping, enjoy Armenian noodles, listen to live music, and watch dance performances! To read about my full experience, check out my Areni Wine Festival Travel Guide! 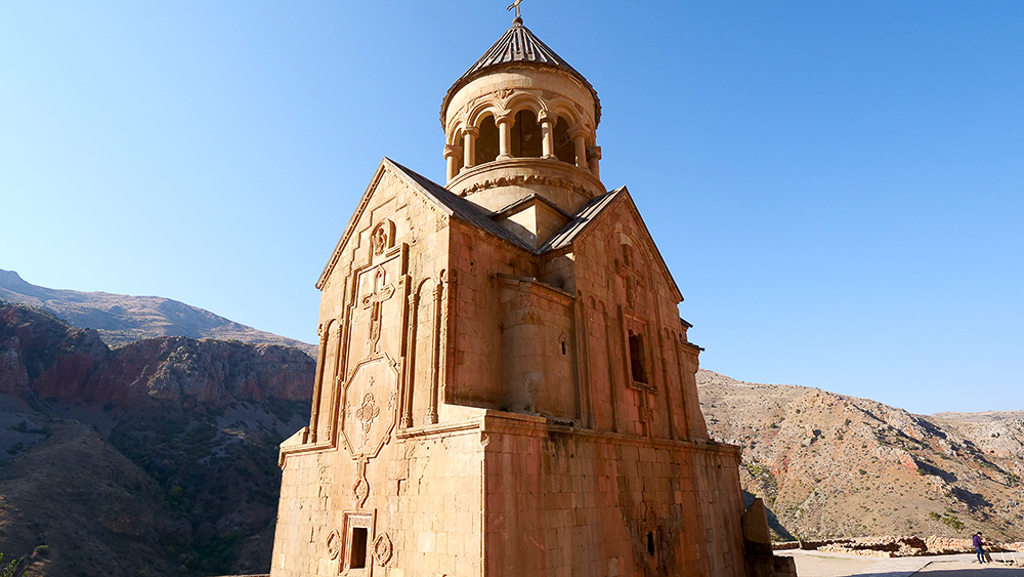 As you travel around the Vayots Dzor Region of Armenia, something you absolutely must do is check out Noravank Monastery. This 13th-century monastery stands in a narrow gorge, directly across from gorgeous, reddish cliffs that were carved by the Amaghu River long ago. On the monastery’s grounds are two prominent churches, a pair of graveyards, a smaller church from the 9th century, and the ruins of a medieval academy. 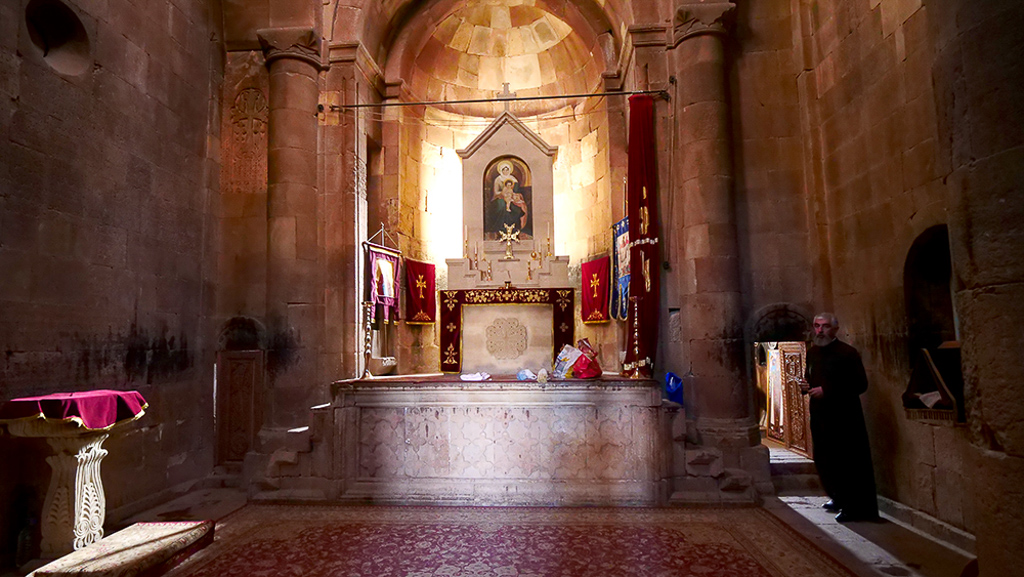 I learned during my visit that the histories of this monastery and Tatev Monastery, which I had visited the previous day, were closely intertwined. After the Seljuk Turks attacked Tatev Monastery in the 12th century, monks from Tatev relocated to Noravank Monastery during the 13th and 14th centuries. Following their arrival, Noravank Monastery became the dominant learning center in the Vayots Dzor Province. It was also one of the most prominent religious, political, and cultural centers in all of Armenia. 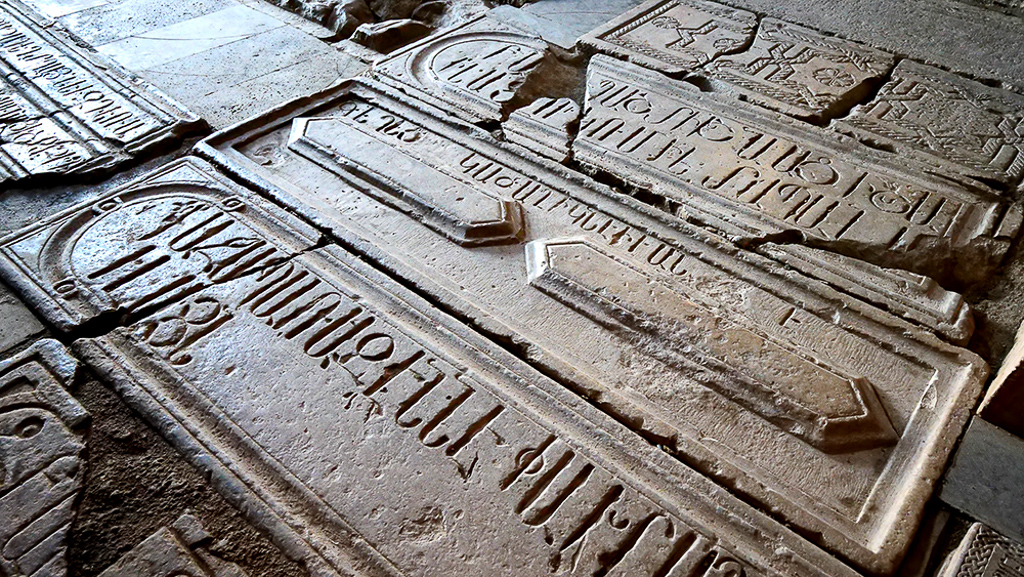 Between Surb Karapet and the largest church, Surb Astvatsatsin, is a cemetery containing roughly 15 gravestones. My guide Lusine pointed out one in particular that had a sleeping lion carved into it, which denotes that the person buried there fought and died in battle. Nearby, you can also find some gorgeous khachkars, or cross-stones. 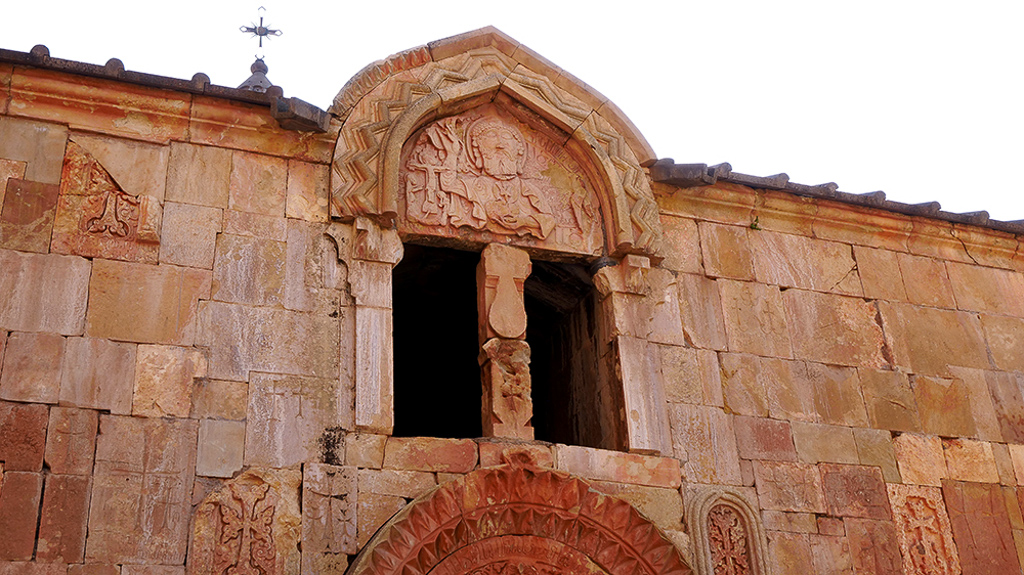 Surb Karapet Church was different from other monastery churches I had visited in Armenia. It didn’t have four columns at its center, and there were also six more gravestones just outside. Despite the lack of central columns, the church was still able to withstand powerful earthquakes. 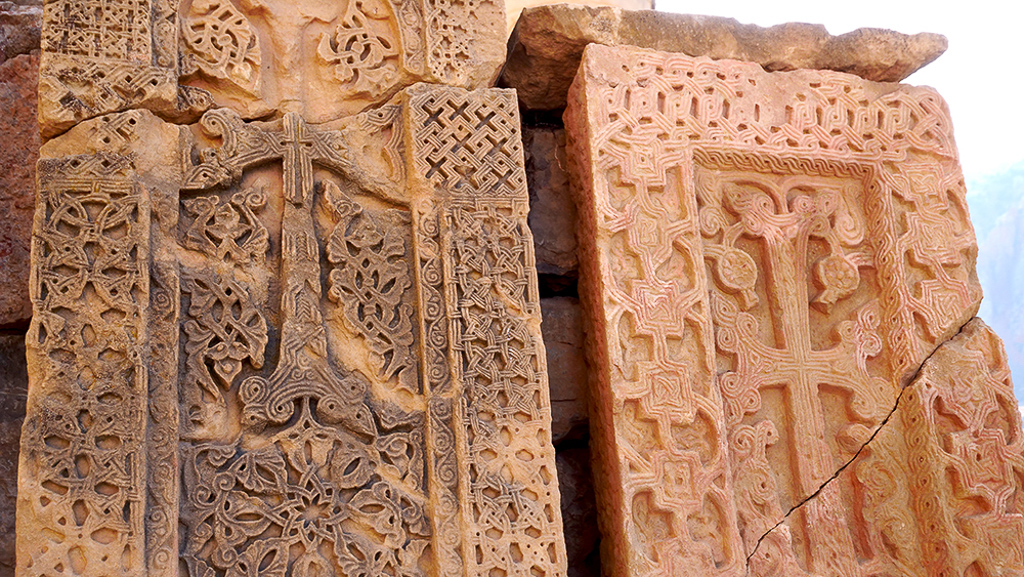 Before you leave the church, be sure to take in the khachkars, as well as the crosses and inscriptions etched into its walls. The wall carvings were beautiful. I had never seen anything like them anywhere else in the world! Seeing them is among the top things you must do in Areni, Armenia. 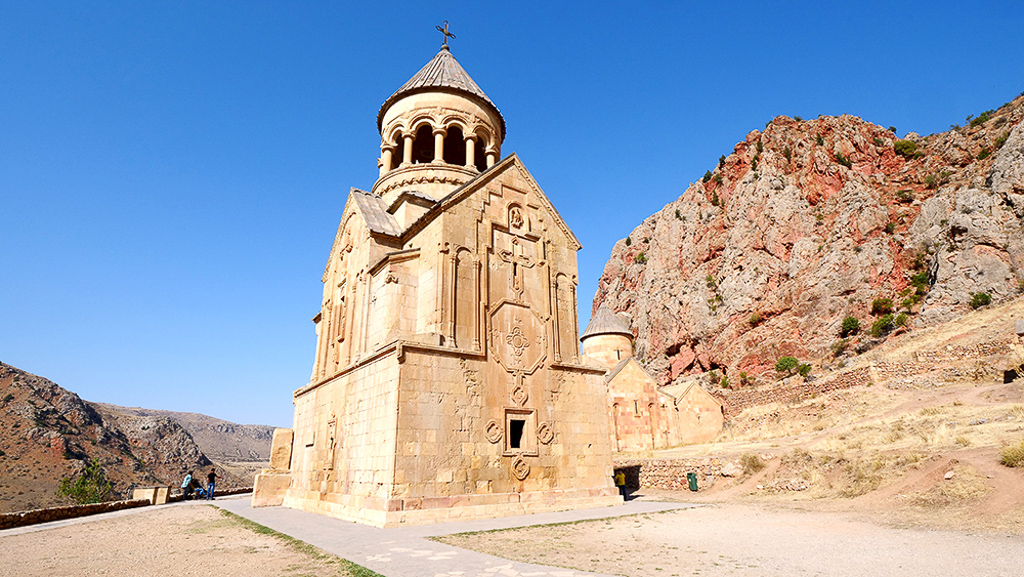 The largest and most prominent on-site church is Surb Astvatsatsin, also known as Holy Mother of God Church. This church is also unique, as it’s a rare example of a two-story Armenian church. It’s known for its grand façade, which includes a steep and extremely narrow staircase leading up to the second floor. There are no handrails and the climb can be perilous if you don’t maintain your balance. 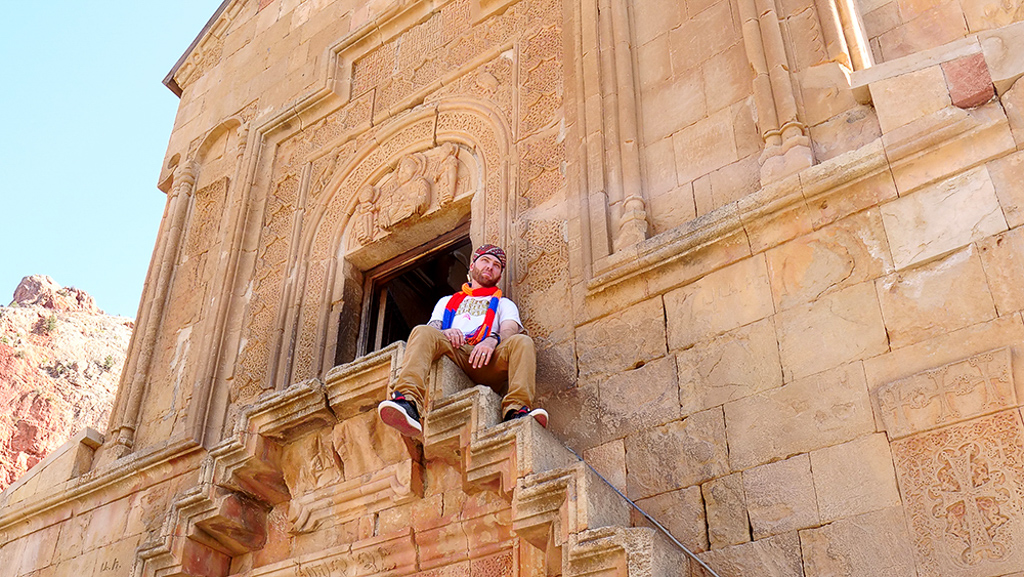 Still, I was able to keep my footing as I climbed slowly and carefully. At the top, I emerged in a gorgeous, partially open-air chamber that I guessed used to hold mass. There was an altar along the back wall, as well as medieval inscriptions and more modern vandalism present. For the climb back down, I recommend just scooting down the narrow staircase, one step at a time, on your backside. No point in taking unnecessary risks! 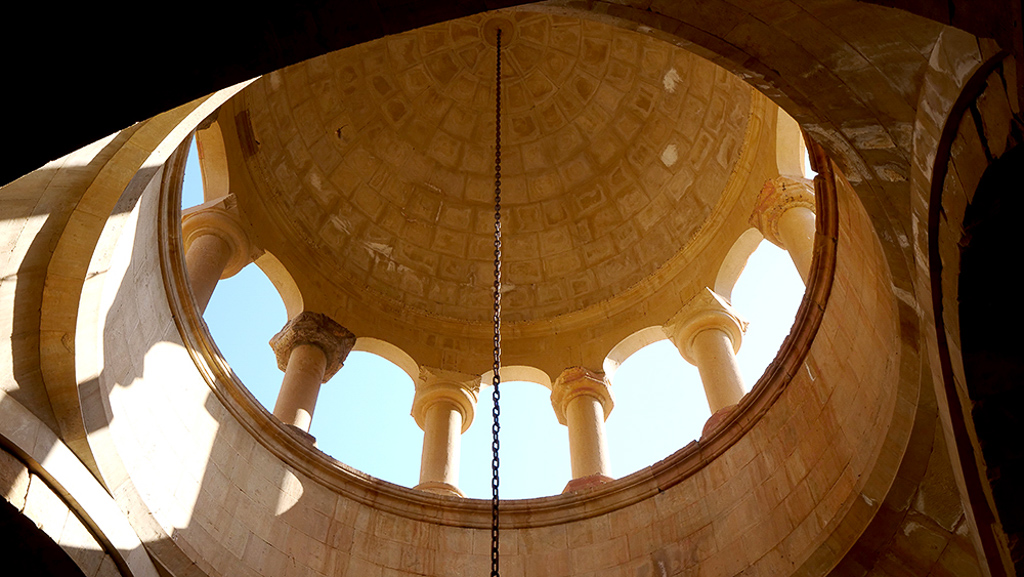 The lower level of Surb Astvatsatsin has carvings of St. Maria, Gabriel, Michael, and Jesus Christ on the façade. Inside is a chamber with a dirt floor. There is an altar there as well, along with more crosses on the walls including a massive one near the altar. This looked more like a prayer area to me. It was quite beautiful! Seeing both the upper and lower levels of Surb Astvatsatsin is one of the best things you must do in Areni, Armenia. 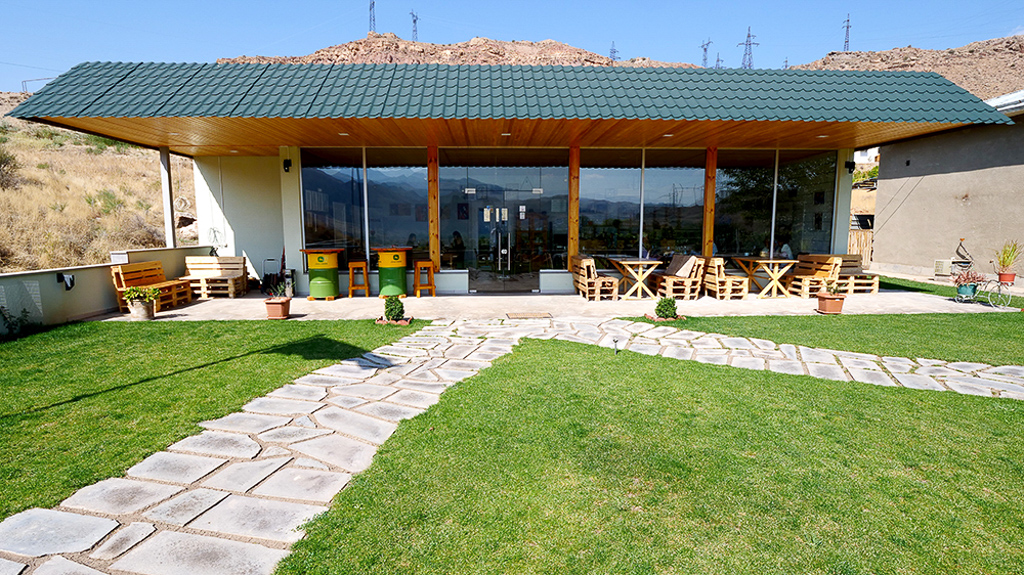 I tried many different wines during my time at the Areni Wine Festival, and the ones I tried from Old Bridge Winery stuck out to me even then. The following day, I had the amazing opportunity to dine at the winery’s showroom and try several of their creations. 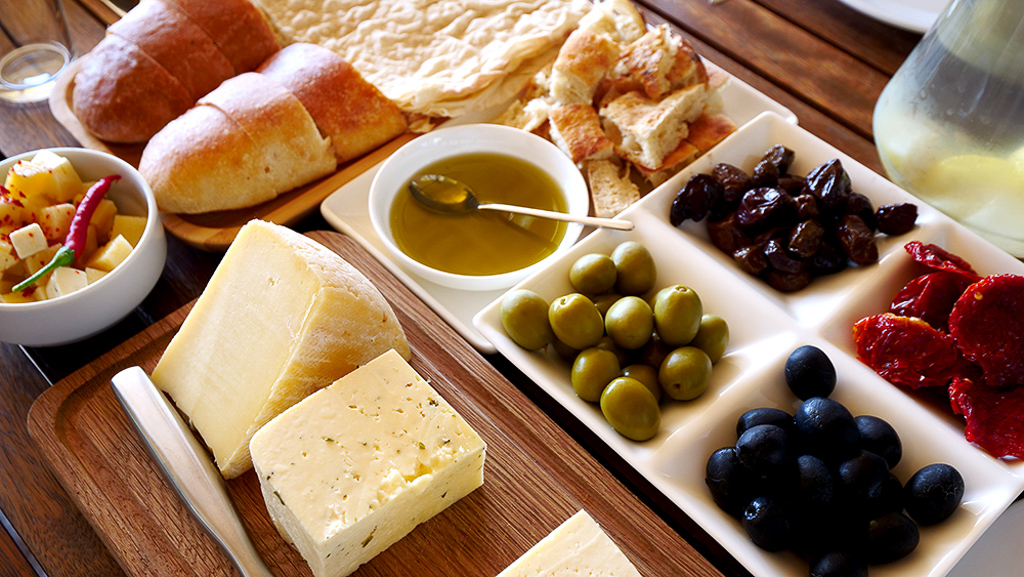 Even before I dug into my food, I tried an incredible Voskehat dry white wine that really set the tone for the meal I was in for. We started with some simple but phenomenally tasty appetizers, including bread, lavash, three cheeses, oil, sundried tomatoes, and olives. I loved dipping the bread into the oil, and the sundried tomatoes were mouthwateringly good. I also loved the cheese that contained bits of thyme in it and the oily olives. 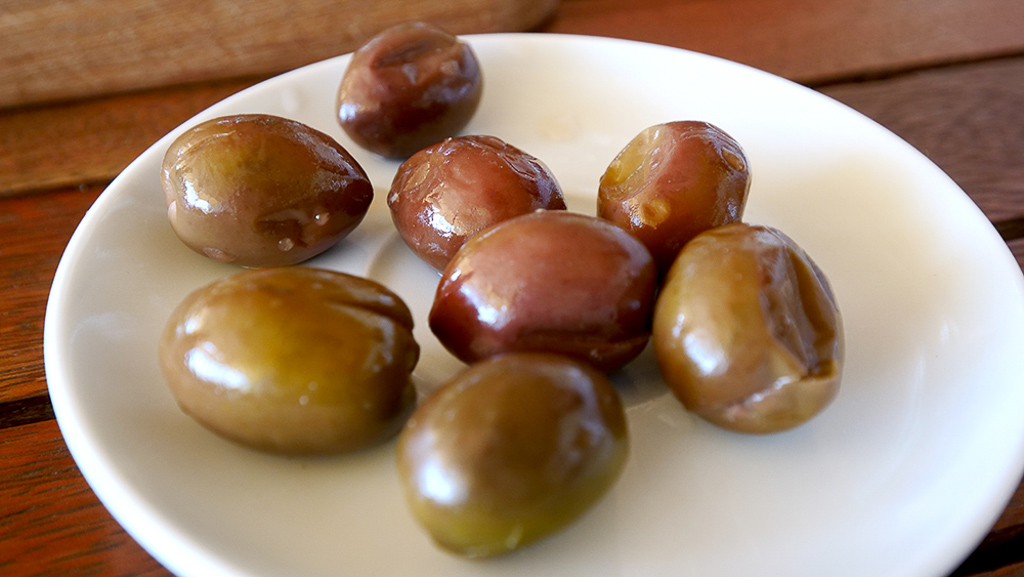 Their beautiful, ruby-colored Areni Noir was another highlight. It’s made from one of the oldest grape varieties in the world and ferments for 18 months in oak barrels. Then, I tried a mix that contained notes of chocolate and honey! 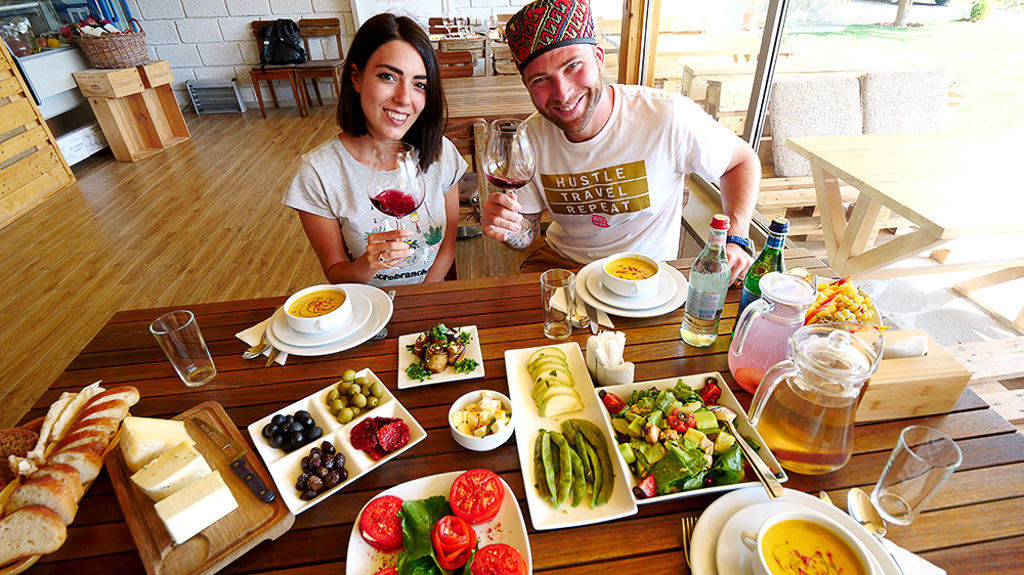 The other foods at Old Bridge Winery blew my taste buds away. The traditional pumpkin soup with peas, beans, and red pepper was incredible, and the roasted eggplant stuffed with herbs and cheese had me salivating the moment it touched my tongue. 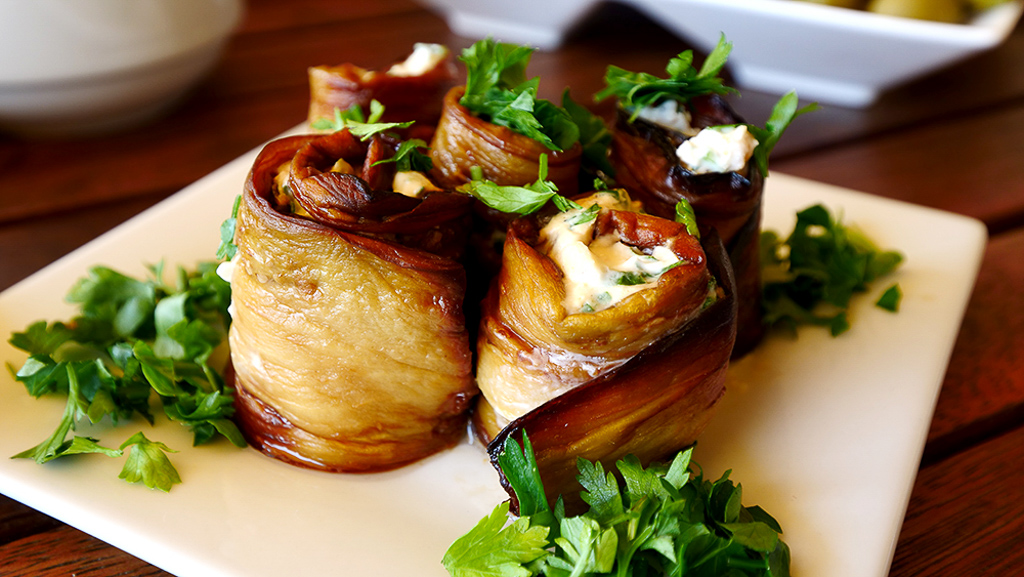 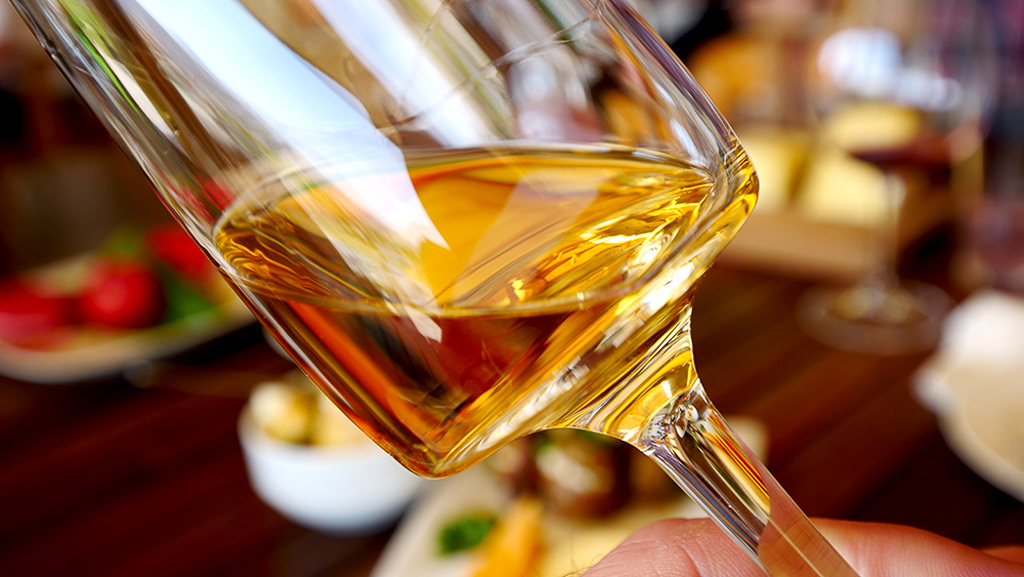 But as amazing as the food was, the wine was the star of this meal. Between courses, I tried a gold-medal-winning wine from 2013 that blew my mind. This particular variety had been aged in oak barrels from Artsakh for 24 months. It was my favorite wine I’d had in Armenia so far! Then, I also tried a smoky cross between grappa and brandy that ferments, with no added sugar, for three to five years. I couldn’t get over how fantastic it was! Trying these amazing drinks is one of the top things you must do in Areni, Armenia! 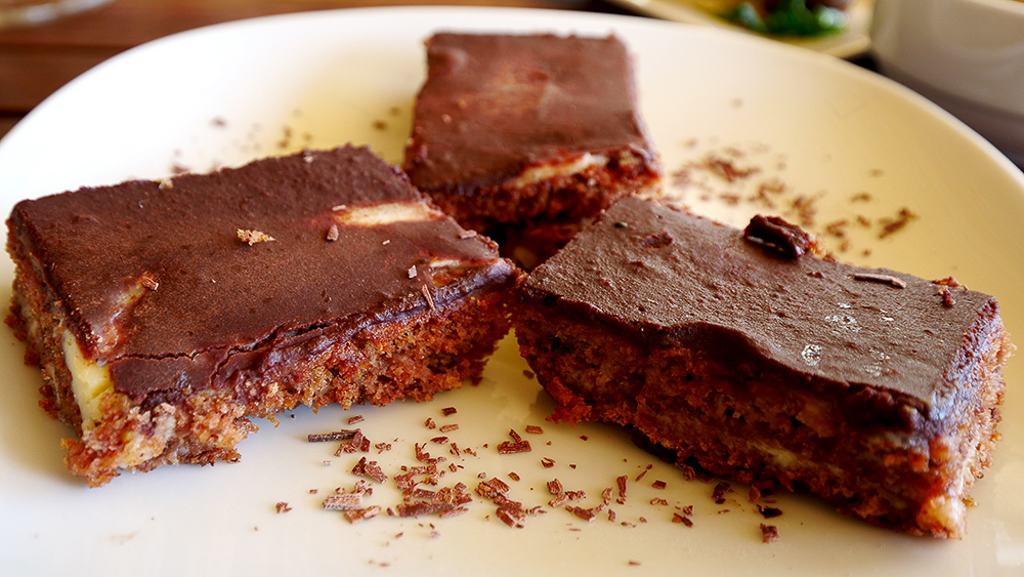 If you still have room in your belly, finish off your meal with some creamy and crumbly chocolate cake! It was the perfect way to cap off what had already been one of the most stellar meals of my trip! 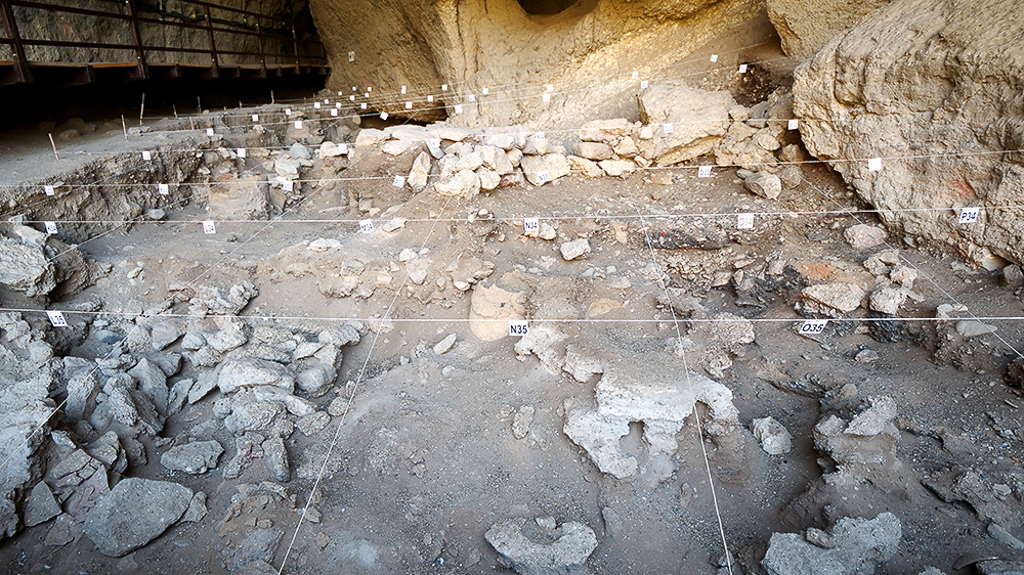 Speaking of wine, Armenia is a country that is well known for its fermented grape drinks. It has long been known that Armenia had a long history of wine production, but no one knew just how long that history was until 2007. That year, archaeologists discovered the oldest evidence of ancient winemaking in the Areni-1 cave. There, they unearthed a 6,100-year-old winery as well as the oldest leather shoe in the world! 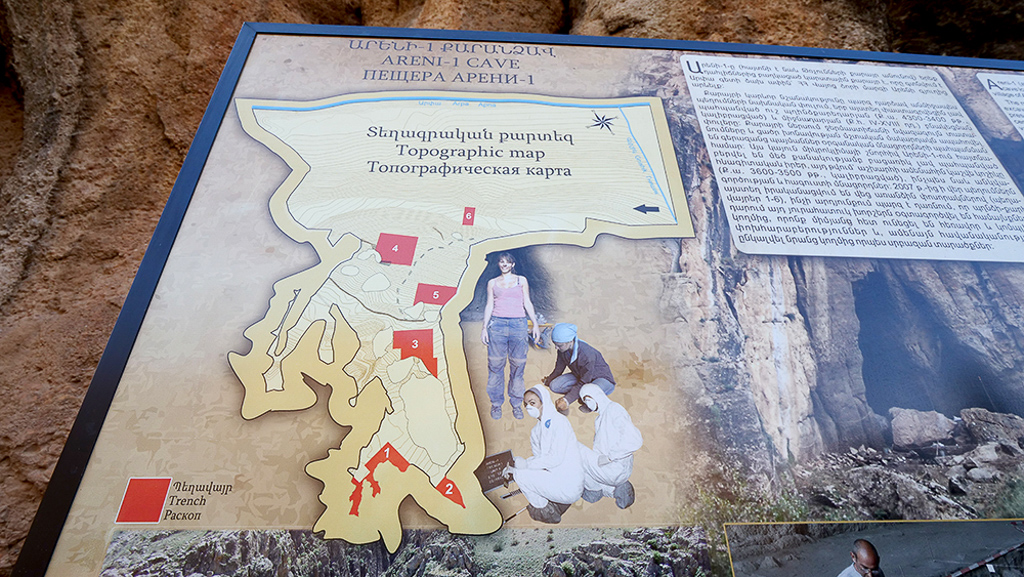 I’ve been passionate about wine my entire adult life and have been a history buff for as long as I could remember. So I knew visiting the Areni-1 cave was one thing I must do in Areni, Armenia. You can enter the complex for just 1,000 Armenian dram, or about $2 USD. 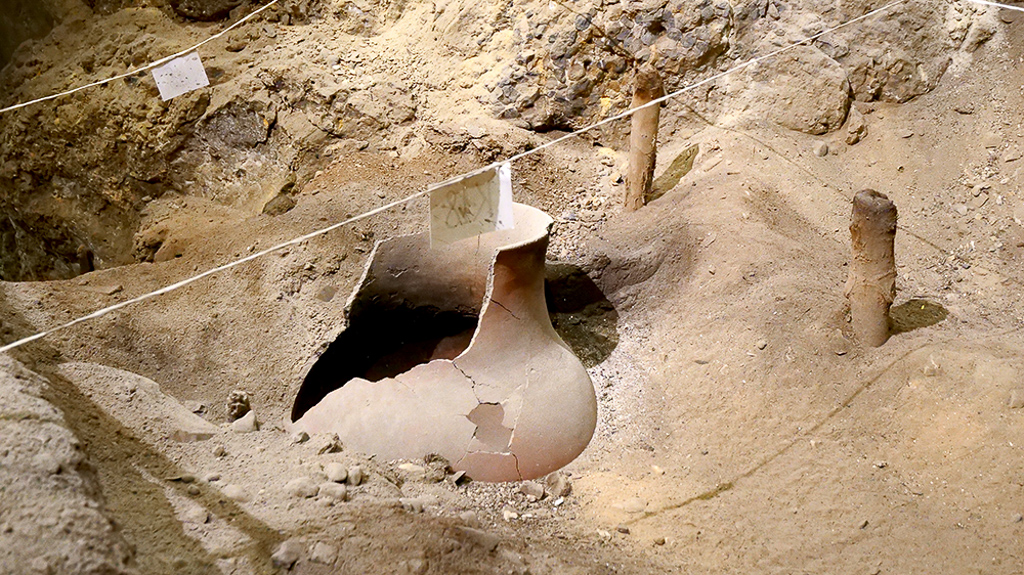 Though it’s obvious from the grids laid out that excavations in the cave are still ongoing, visitors are free to roam the cave and explore on their own. It’s actually one of the few archaeological sites where visitors can get up close with ancient treasures without glass protecting them. From the moment you enter, archaeological treasures like broken pottery and tonir ovens from the 13th and 14th centuries are clearly visible. 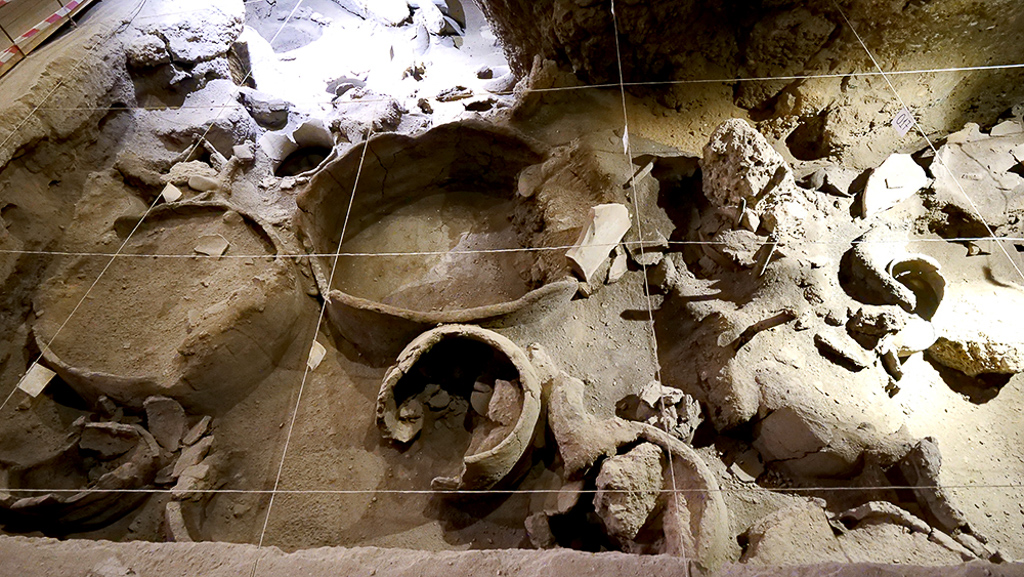 Beyond the first cavern is a narrow tunnel called Trench-2, where more jars, tools, coins, and fragments of ancient items were found. Further on is the oldest winery in the world, where grape seeds and clay jars were discovered. I also learned that three human skulls were found here, and one of them even still had intact brains inside it. 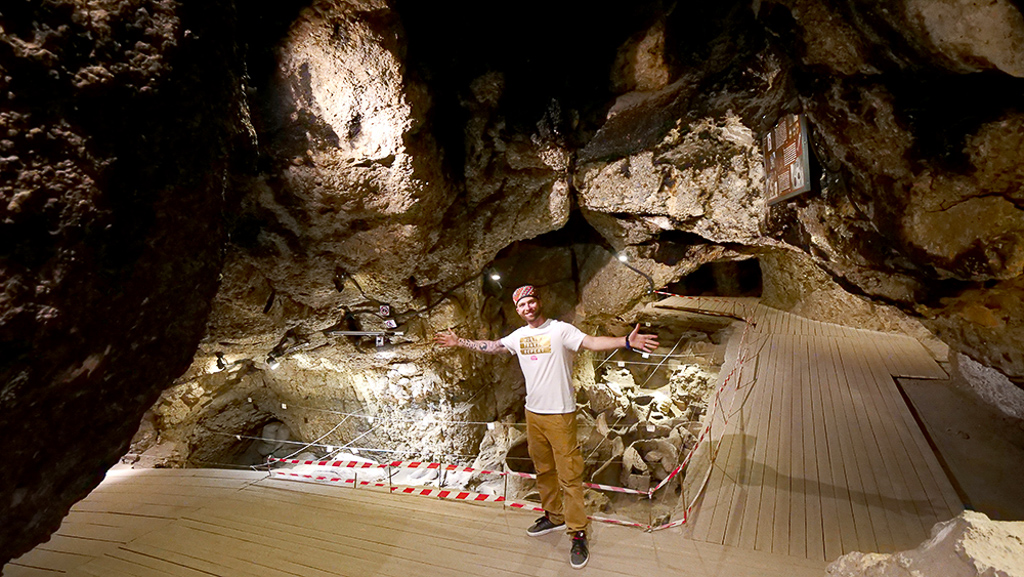 The Areni-1 cave was beyond anything I had imagined. I had never visited an archaeological site like this. It blew my mind that, as large as the cave is, that there are many more chambers that hadn’t yet been opened. The archaeologists there say it will take several generations before they unearth everything the cave has to offer. If you’re ever in the Vayots Dzor Province, visiting this cave is easily one of the top things you must do in Areni, Armenia. 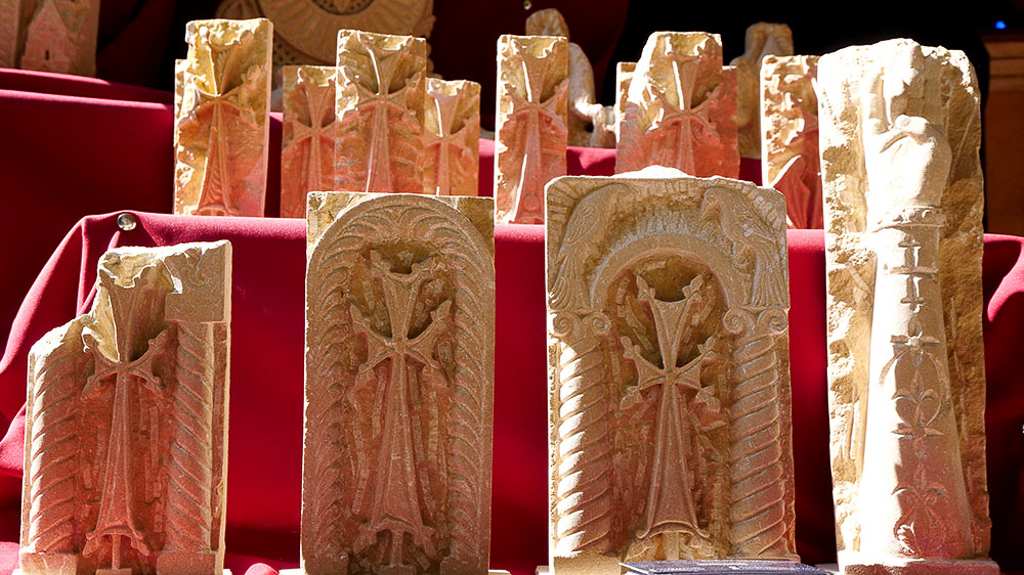 Before you leave the area, check out the craftsman outside the cave who sells hand-carved religious items, including crosses, delicate-looking hands, and much more. His painstaking creations take weeks to finish, and his work is also quite inexpensive for the amount of labor involved. Supporting local artisans is one of the best things you can do when you travel! 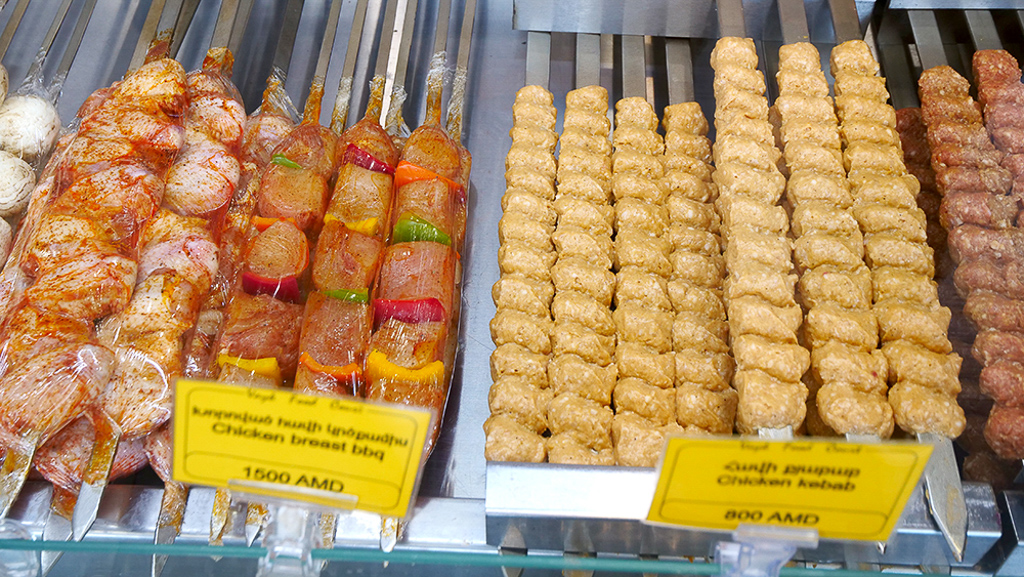 If you’re coming from Tatev to Areni, or are heading to Tatev from Areni, be sure to stop at Food Court. It’s not actually a food court; it’s actually a sleek, modern restaurant that has an amazing buffet. They offer breads, chicken, potatoes, salads, pizza, and more! They also sell some of the tastiest beef kebabs I had in Armenia! 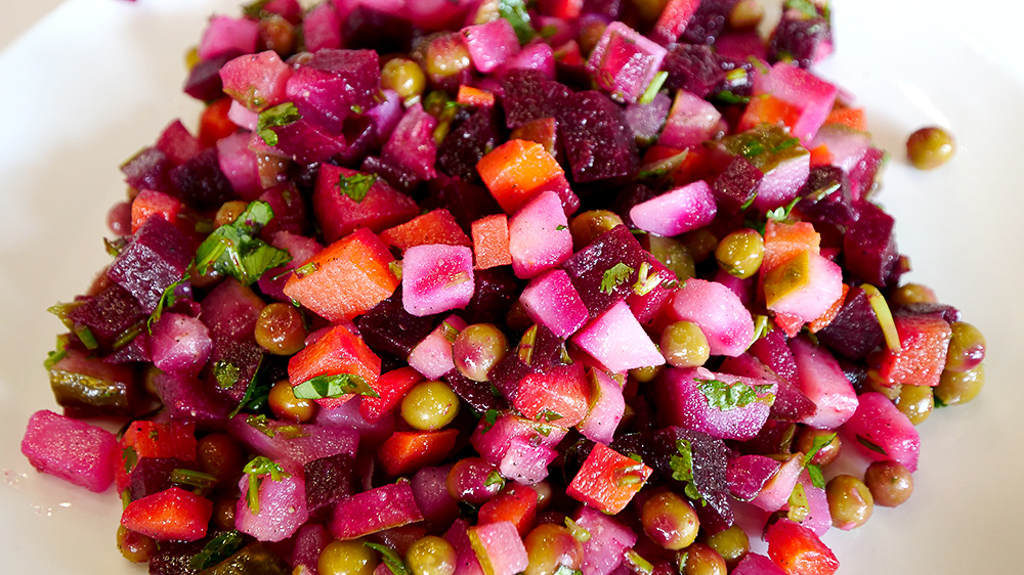 These beef kebabs come wrapped in a rolled-up piece of lavash, or Armenian flatbread, along with sauce and tasty vegetables. The meat has a nice amount of spice to it and is very juicy and tender. I also recommend trying their roasted vegetable salad, which contains some divine eggplant. Don’t miss the carrot, pepper, and oil salad and the pea salad with red beans. They’re all incredibly fresh and come straight from the farm! 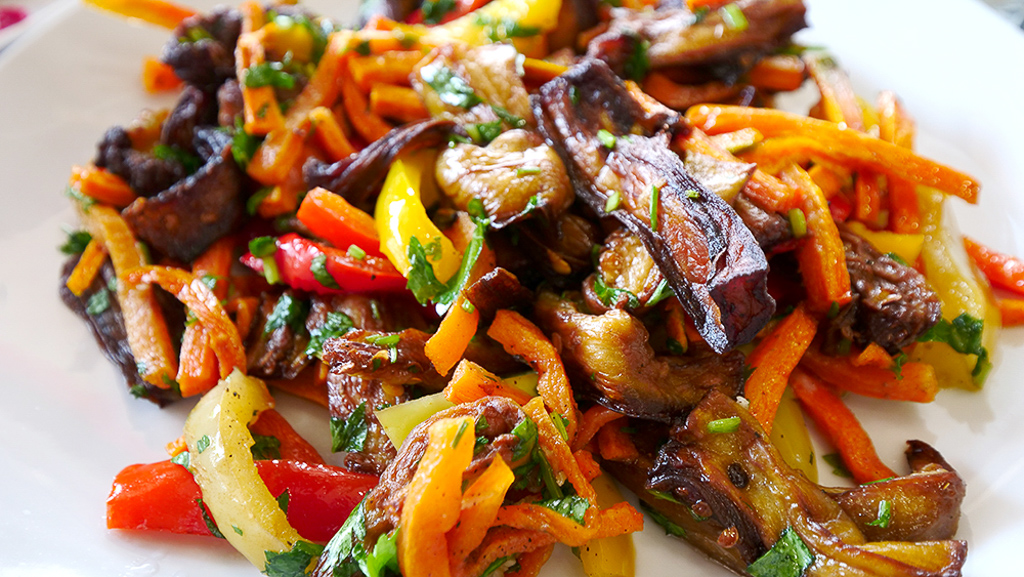 Finish off your meal with some matzoon, an Armenian yogurt drink that helps with digestion after eating a spicy meal. It’s not very thick and is more like a watered-down yogurt. But it is very tasty and helped me beat the spice from the kebab! Trust me, having this meal is one of the top things you must do in Areni, Armenia!

Check out What to See and Eat on Lake Sevan, Armenia 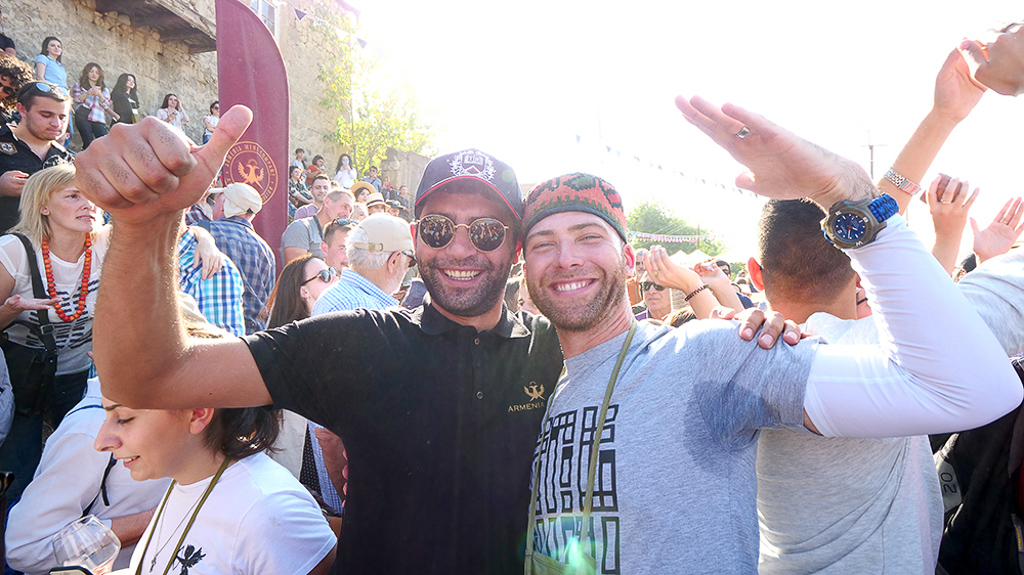 Between the sheer number of wines you can try in Areni, the historical sites, and the dining options, this area is one you must visit when you come to Armenia. During my time there, Armenia became one of my all-time favorite travel destinations, and the Areni area was a big reason why. I think you’ll love it as much as I did. So please book a trip to Armenia next October to begin your Areni adventure today!

Special thanks to my friends at Armenia Travel for their kindness and hospitality, and for arranging my trip. I couldn’t have done it without them!