After years of dreaming of exploring the state of Kerala in southern India, I finally made my dream a reality in January of 2020. I landed in the capital city of Trivandrum in the wee hours of the morning and set out on an epic Kerala Indian food tour of Trivandrum just a few hours later. Come along with me as I set out to explore the wonders of God’s Own Country, Kerala, India!

I began my day by meeting up with my boy Vishnu at Sri Padmanabha Temple, one of the most prominent Hindu temples in the world. It’s also the richest temple in the world! It’s dedicated to Lord Vishnu. The Vishnu effigy in the temple is in a lying-down position and is 18 feet long. I couldn’t go inside because I wasn’t Hindu, but there are lots of images of Vishnu at the vendor stalls outside the temple. 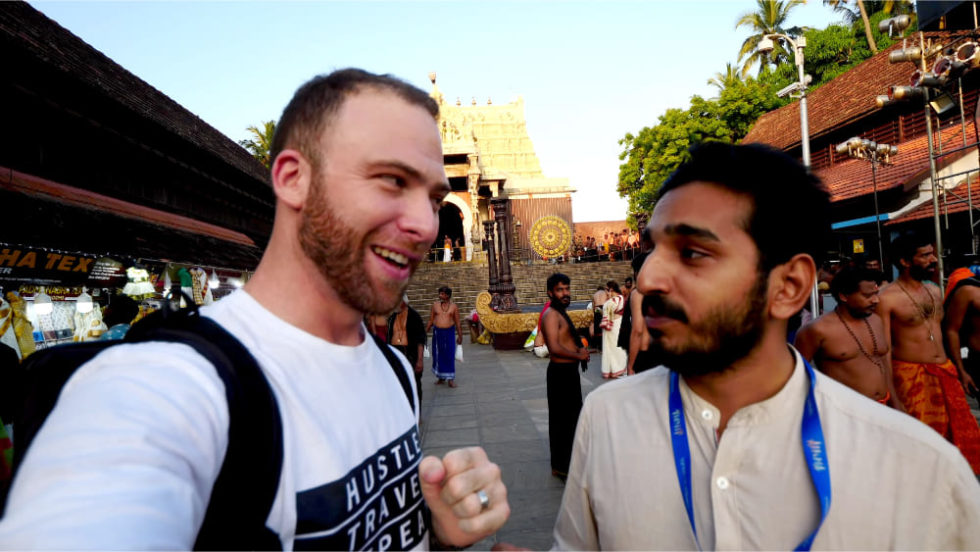 We also saw some pilgrims from Sabarimala Temple, a Hindu temple in Kerala. Then, I put on a helmet and hopped on the back of Vishnu’s motorbike to head to Good Morning Hotel to begin our Kerala Indian food tour of Trivandrum, India! 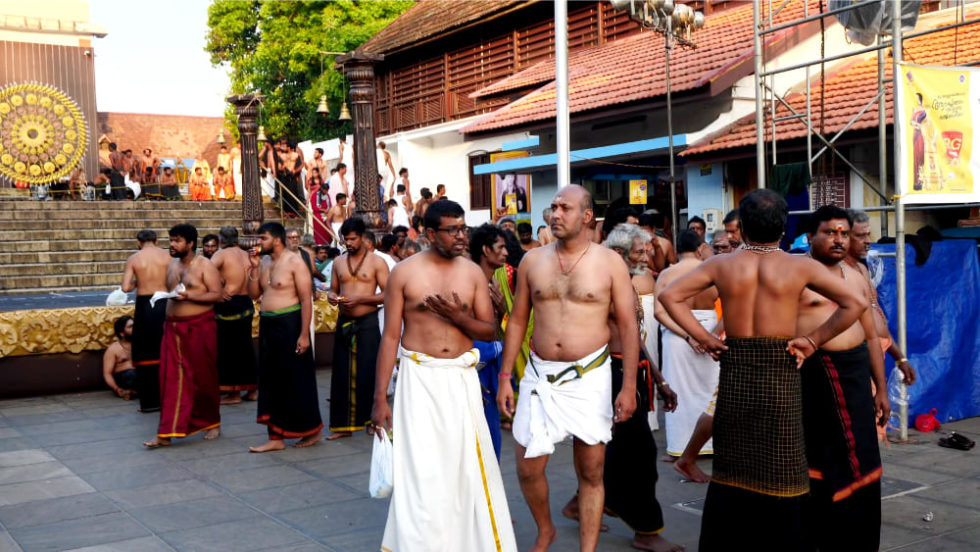 There were so many people out in the city. South India is always full of people. They mix with the cars and bikes in the street. It’s wild!

The Good Morning Hotel starts selling food at 6:30 in the morning, and they’re usually sold out by 8:30. You have to get there early! We decided to start our Kerala Indian food tour in Trivandrum with porotta and beef curry. Porotta is a popular flatbread in Kerala. 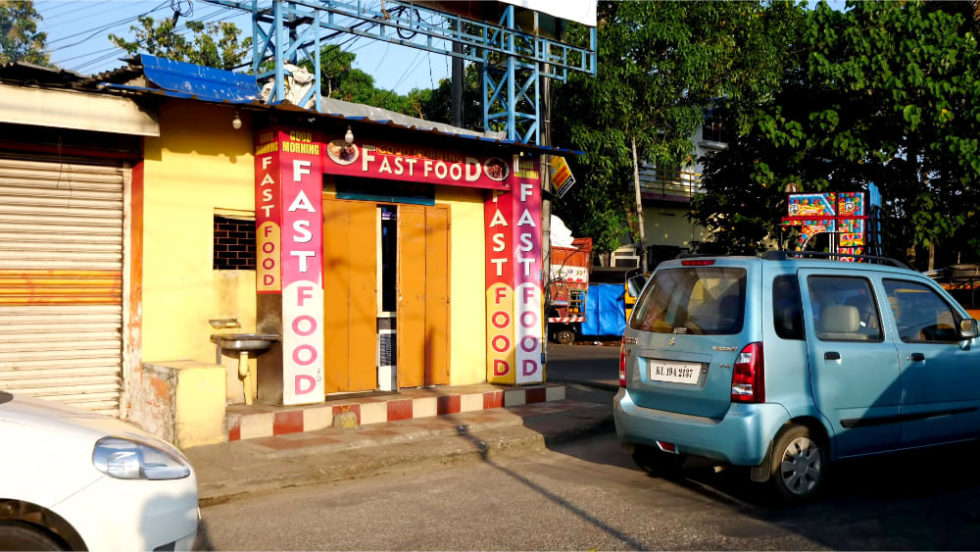 I watched them make the porottas in the kitchen, which was super hot and smoky. They rolled the porottas into balls, which I’d never seen before. They make about 700 porottas in the morning here, and another 800 in the evening! The beef curry would be spicy, and I could feel the chilies hitting me in the face as they cooked it over the wood fire! 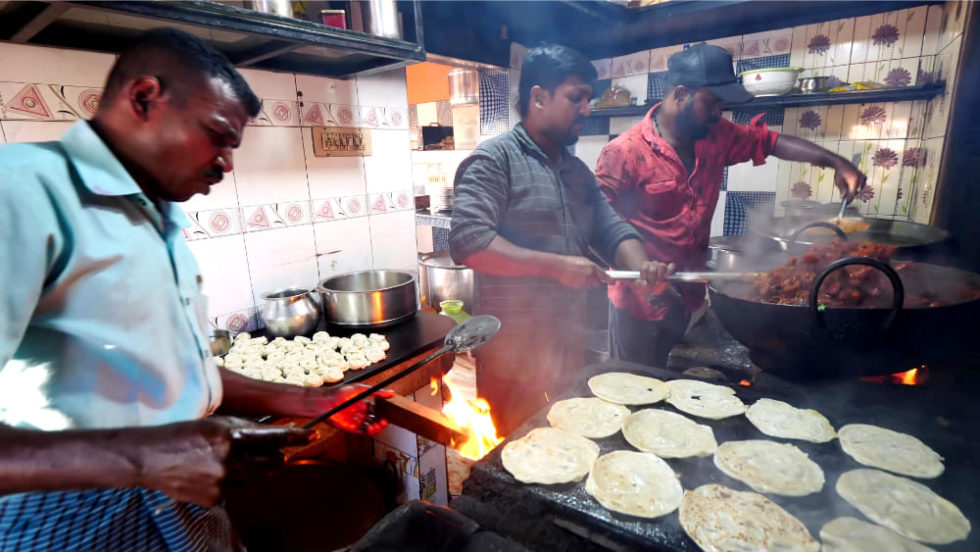 We watched them mix the beef into the rich, red masala, and then it was finally time to eat! I got three porottas with my beef curry. I was so excited! First, I grabbed a bit of porotta with one hand and grabbed some of the chunky beef with it. It was really spicy, tender, and so delicious! This is the official dish of Kerala. I loved the masala. The paratha was flaky and had lots of layers, which absorbed the masala and made it different from a paratha. 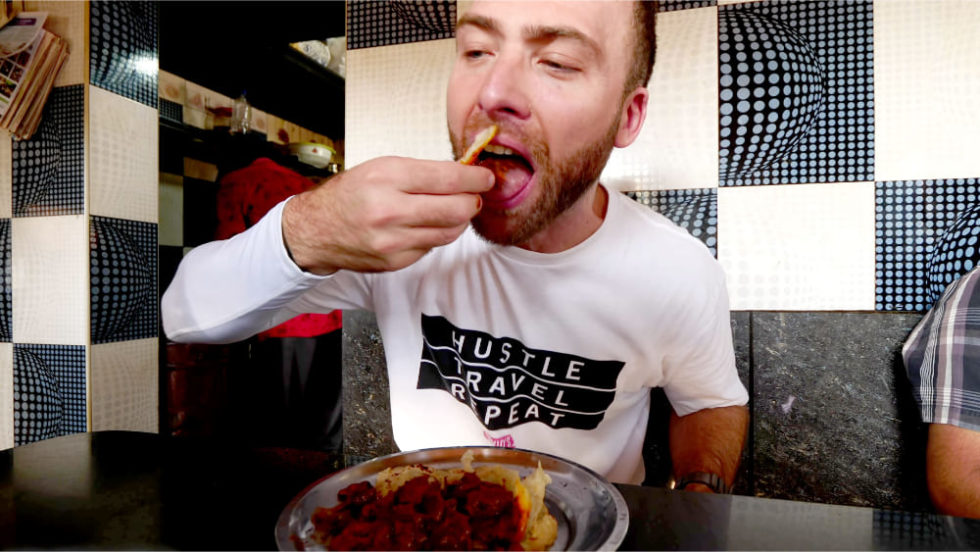 As I ate, the place started getting packed. Vishnu and I enjoyed some black tea with mint leave, ginger, and herbs. It contained masala and nice chunks of ginger. I loved it! It was such a great combination! Our Kerala Indian food tour of Trivandrum was off to an amazing start!

I could have eaten a lot more, but I wanted to take it easy because we had more to eat later! Then, we headed somewhere really special, Attukal Bhagavathy Temple. 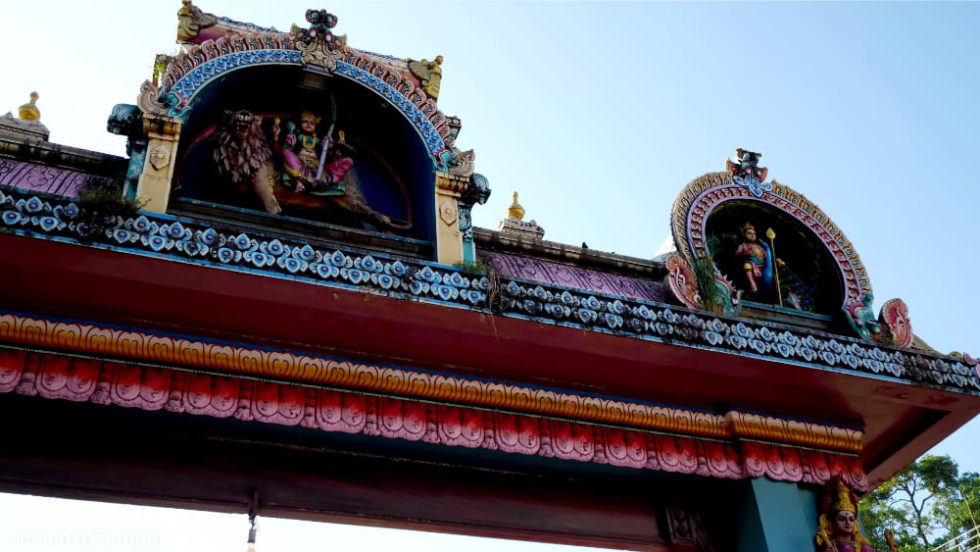 “Kerala” means “land of coconuts,” and I could see coconuts everywhere. Five minutes later, we arrived at the temple. It’s famous because it’s a pilgrimage site for women. About 500,000 women come here and make sweets in brick ovens. 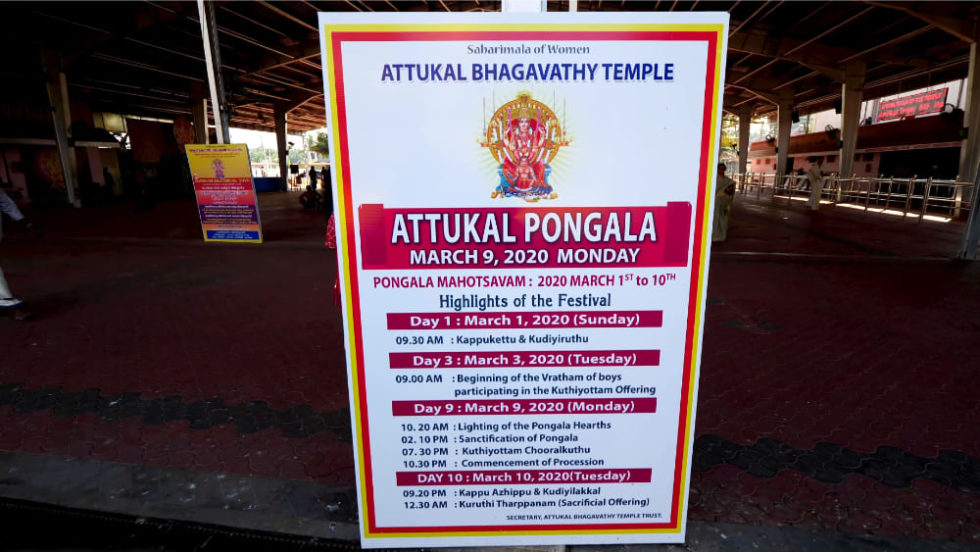 Then, we headed to Chala Market, where you can get just about anything, including vegetables and meat. There are hundreds of jewelers, spices, and food. On the way, we stopped to look at some bananas. There are at least 14 varieties of bananas in Kerala, and five right here at this stall. They all taste different from one another. The one I tried, called palayamkodan, wasn’t quite ripe, but was a little sweet, soft, and tangy. 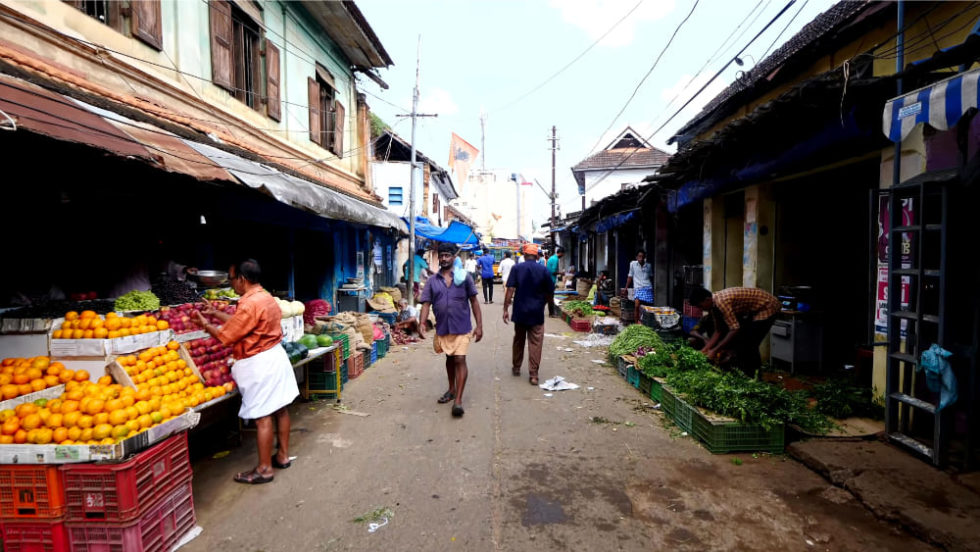 Then, we visited the vegetable and fish market. We saw some limes, pickles, potatoes, cabbage, tomatoes, and eggplant. They also had some ginger, different seeds and lentils, carrots, shallots, chilies, beets, peas, and even an okra-like vegetable called lady’s finger! 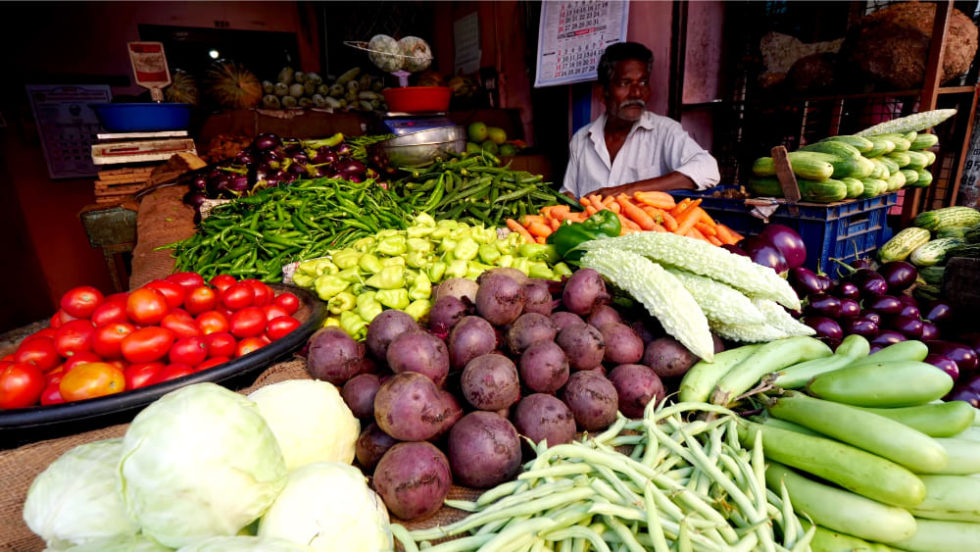 Then, we continued our Kerala Indian food tour of Trivandrum at a shop with a a drink called soda sarbath. It’s super sweet and is made of a crushed root plant mixed with sugar syrup. Then, they mix it with fresh lemon juice, water, and ice. It’s the perfect thing to drink when you’re dehydrated. The drink was herbal and medicinal but still refreshing and super sweet. It was perfect because it was getting really hot out!

We continued through the vegetable market to the fish market. I love fish markets. There’s always so much to see and tons of activity there. One the way, we saw some tapioca and then some fresh fish straight from the sea. The fish and shrimp still had sand mixed with it. I could also see crayfish, tuna, and more. There were about 20 vendors. On the left was fish ready for sale, while the butchers were on the right, breaking down fish that had been sold. 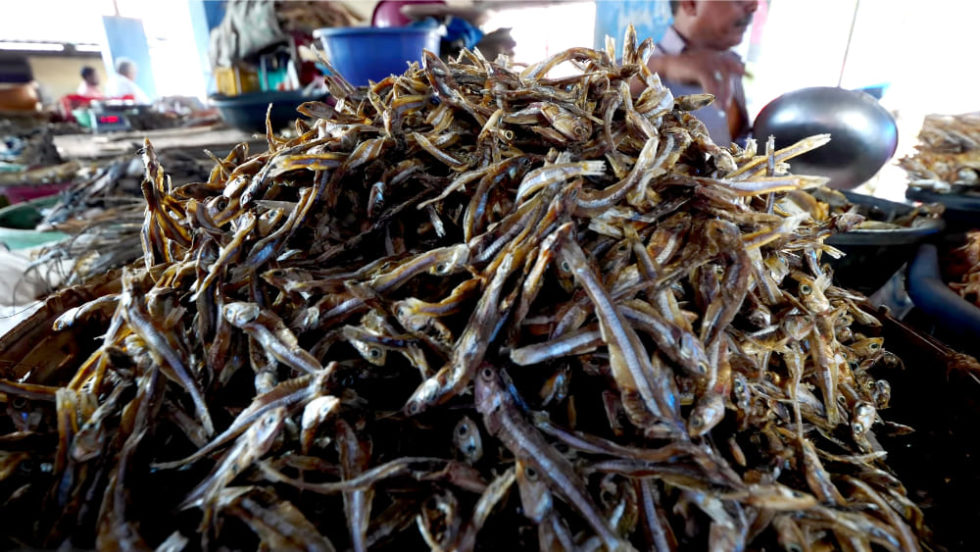 Past them is dried fish like sardines, shrimp, snakefish, and more. Then, we continued on down the main lane. The lane was tight with all of the vendors and cars. But we made it through and next headed to Edaneram Restaurant. They usually open at noon, but they opened an hour early just for us! 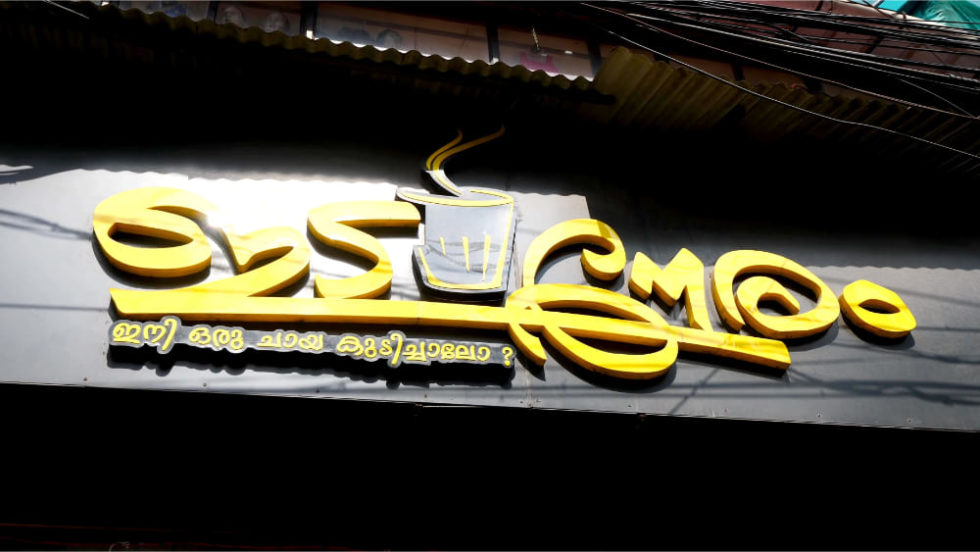 “Edaneram” means “break time” and is a different style of Indian restaurant. It’s air-conditioned, has lots of light, and is colorful, but still has a cozy feel. Movie posters from local movies are all over the walls. We had some boiled water with spices. It contained lots of flavorful spices and was boiled, so we knew it was safe to drink. 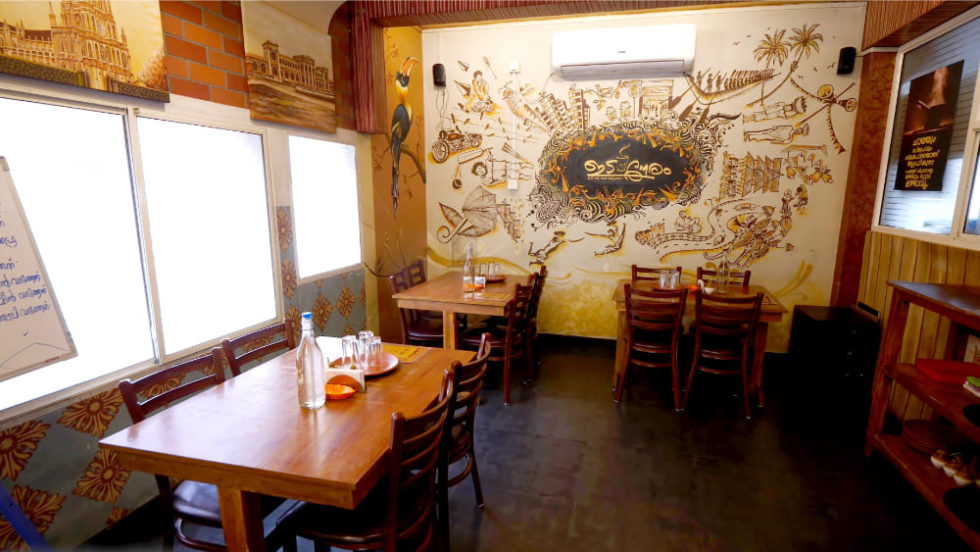 Root vegetables used to be popular in Keralian cuisine, and Edaneram is trying to bring that back. I tried three root vegetables including yam and cassava (yuca). There were also three chutneys: bird’s eye chilly chutney (kanthari mulaku), a Kashmir chili chutney, and gooseberry chutney.

The bird’s eye chilly chutney wasn’t too spicy at first, but it snuck up on me a few seconds later. It also contained onions. The cassava was dense and bland, but was perfect mixed with the spicy chutneys! Then, I tried a chili, which hit me the second I put it in my mouth! 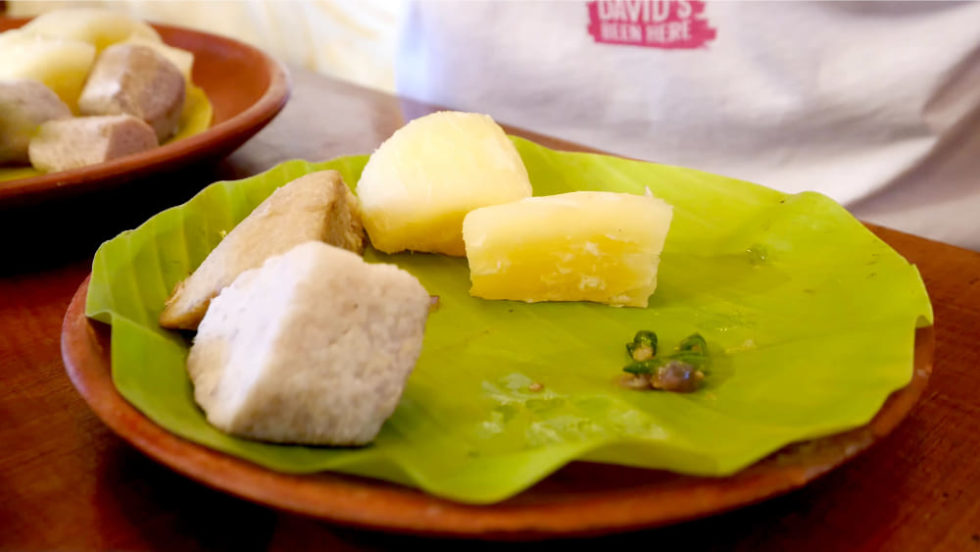 Then, I tried some hot lime tea, which was really good! Next was the Kashmiri chili chutney, which is made from roasted chilies. The gooseberry chutney was also great! They’re like small apples. My favorite chutney was the bird’s eye chilly, though! 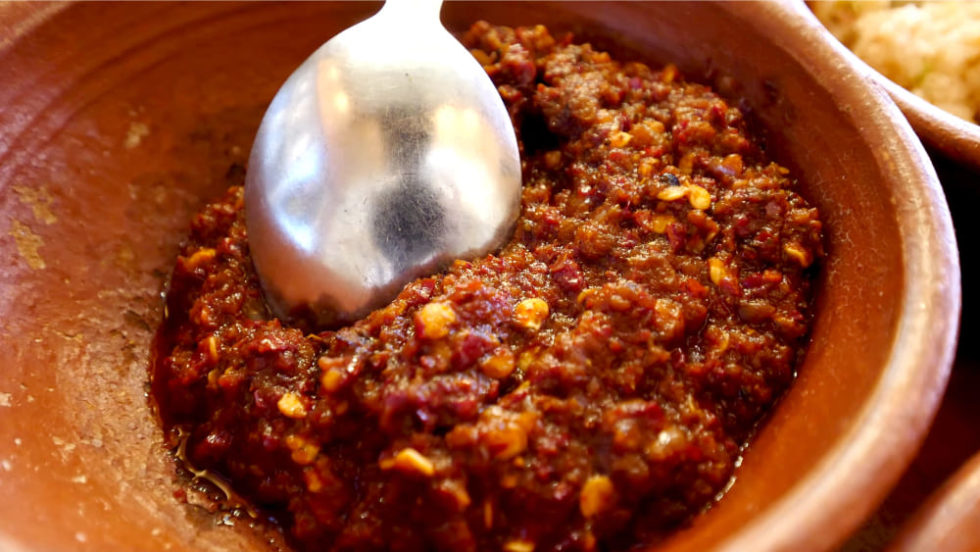 Then, we finished our Kerala Indian food tour of Trivandrum with a sweet, fried banana with buffalo roast (pazham pori and pothu curry). You eat them both on a banana leaf! The curry contained bits of coconut and curry leaves. 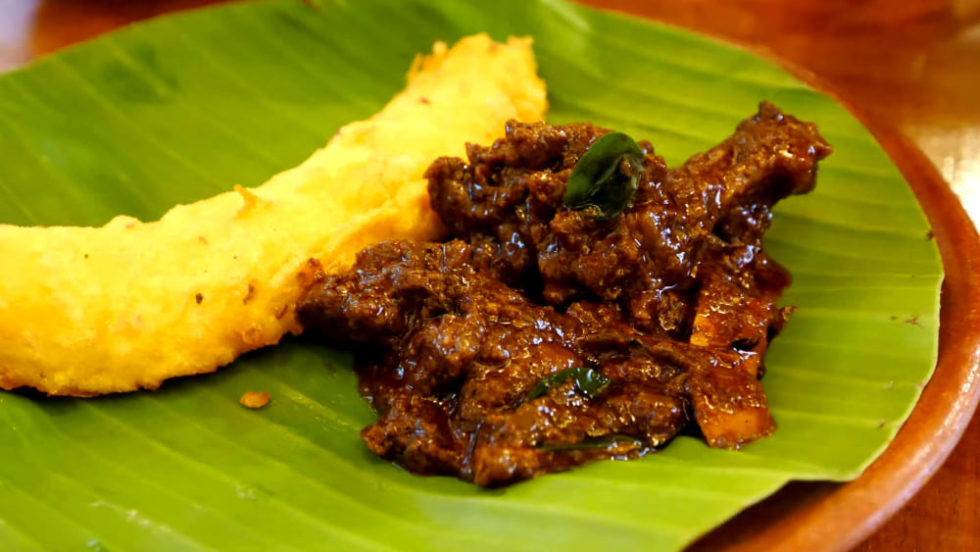 I took a bit of banana and mixed it with the buffalo. It was unbelievable! The banana tasted like a plantain. The combination was sweet and spicy and I loved the light dough on the banana. What an unreal combo! It was my favorite dish of the day! 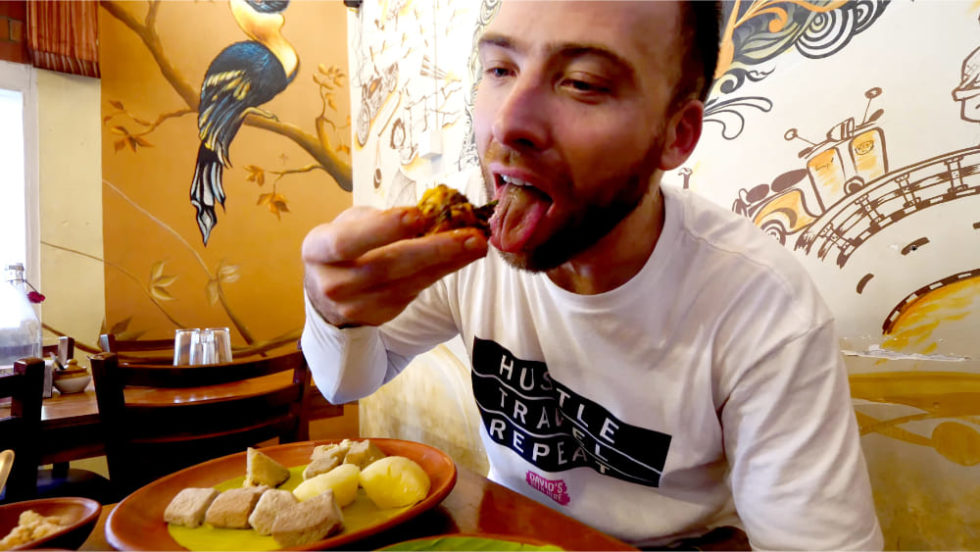 What an incredible Kerala Indian food tour in Trivandrum, India! Huge thanks to my friend Vishnu for taking the time to show me around his hometown. 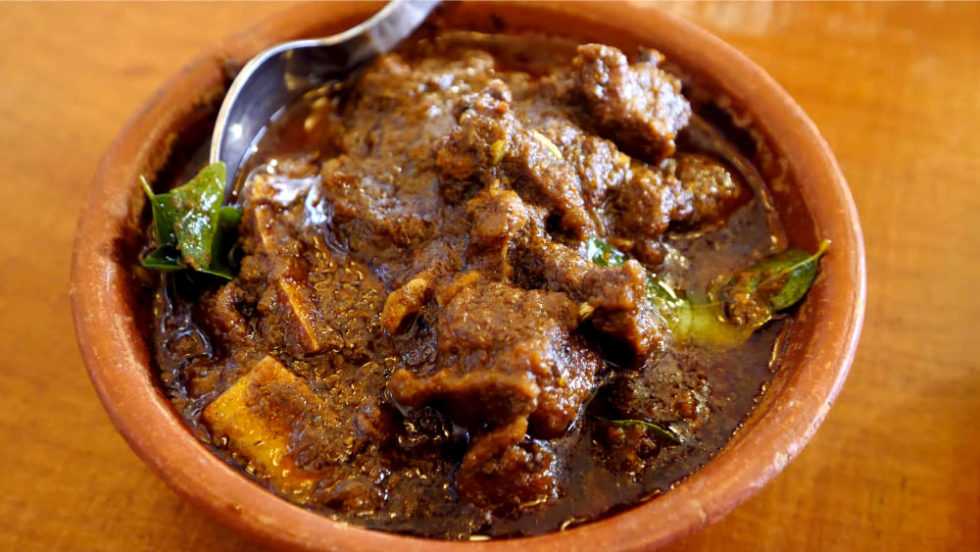 I hope you enjoyed coming along on my Kerala Indian food tour of Trivandrum, India! If you did, please give this video a thumbs up and leave a comment below. Also, please subscribe to my YouTube channel and click the notification bell so you don’t miss any of my travel/food adventures!