After spending an amazing morning on my first game drive in Manas National Park, I was ready for round 2 in the afternoon! This tiger and elephant reserve is located 3 hours north of Guwahati, along the border separating India and Bhutan, and covers 2,837 square kilometers. It’s also a UNESCO World Heritage Site and is home to many types of animals, including rhinos, water buffalo, peacocks, deer, turtles, and more. Come along with me as I try some Indian jungle food in Manas National Park and have an unforgettable Asian elephant encounter! 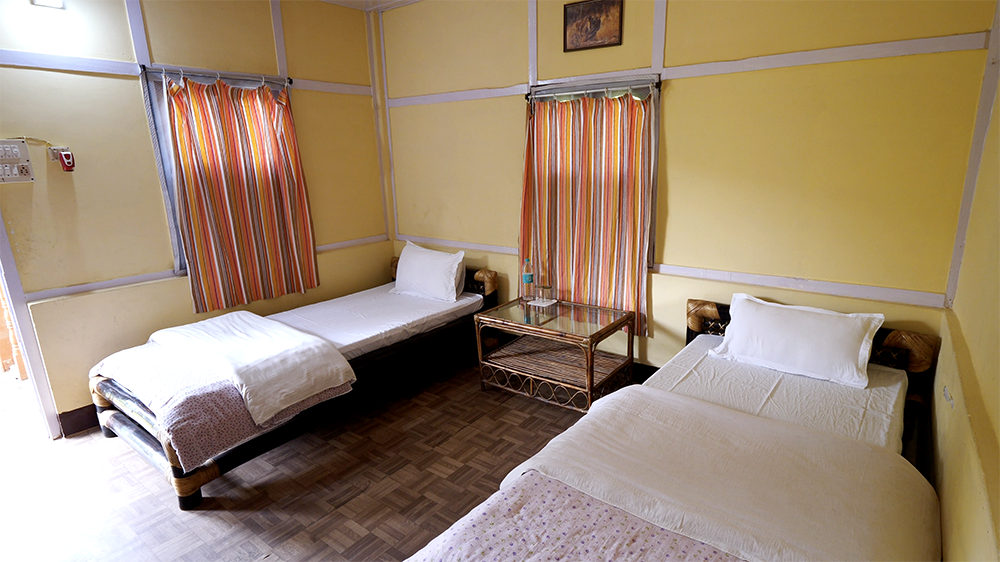 But before our second foray into the park, I wanted to show you the Florican Cottages we based ourselves out of and take you with me to have a traditional Assamese lunch! The cottages are a nice and cozy spot to take a quick rest. This cottage had 2 beds inside it, a nice bathroom, and a much-needed device to get rid of mosquitoes. The mosquitoes in Assam are brutal!

Outside the cottage was a cow roaming the grounds. There are 9 cottages in total. Ours were smaller, but there are double-sized cottages that are perfect for families as well. The cottages cost between 2,100 and 3,500 rupees (roughly $30.24-$50.41 U.S.) per night, so they’re very affordable. 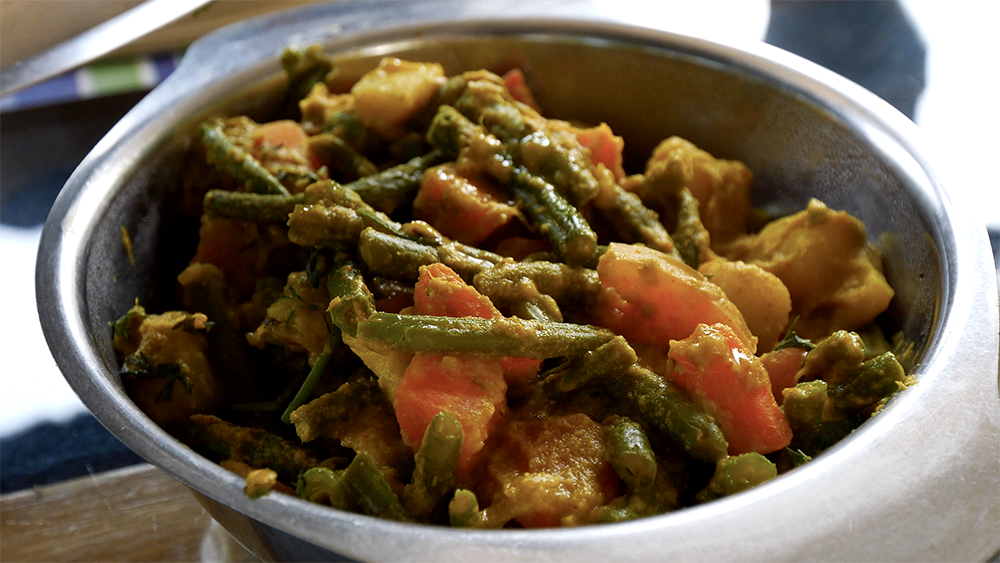 Then it was off to lunch! We had yellow dal, mixed vegetables with curry, chicken curry, sticky rice, tomatoes, carrots, onion, cucumber, papad, and Indian French fries. I started with the dal and rice, which was super light and very flavorful. 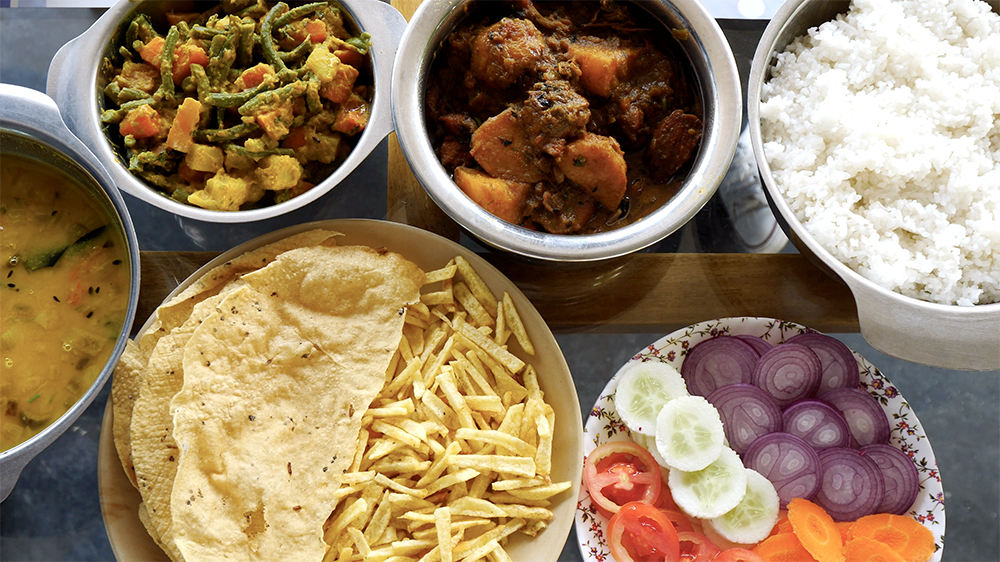 The vegetable curry contained green beans, potatoes, and carrots and was a little spicy! The green beans were fantastic. 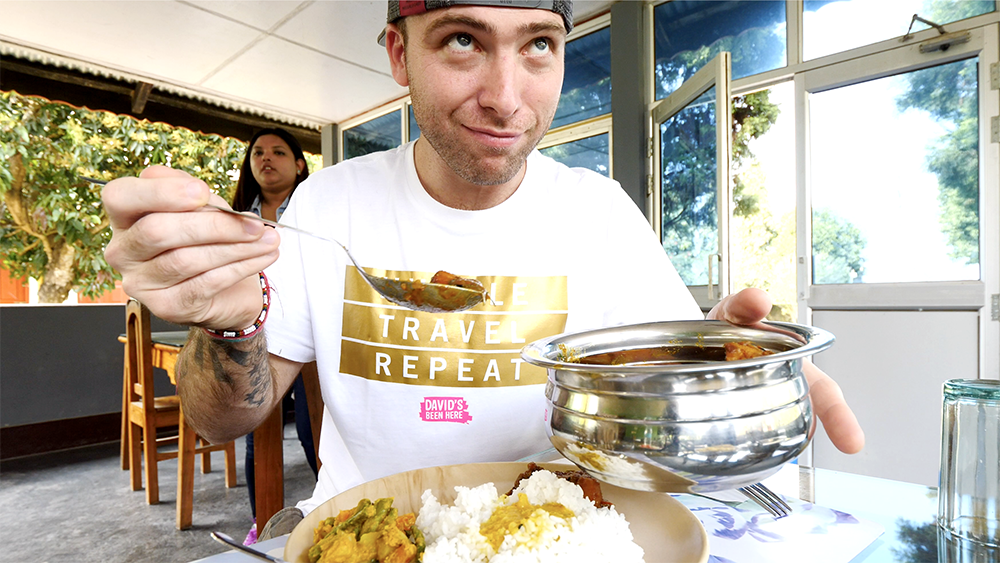 The chicken curry contained large pieces of chicken as well as potatoes, carrots, and herbs in a rich sauce. The spices were incredibly tasty and the chicken was nice and tender. I could tell that the chicken had been freshly killed and butchered. Then I cut up a chili and mixed it with the rice. It was nice and hot and brought out a lot of flavor in the food. 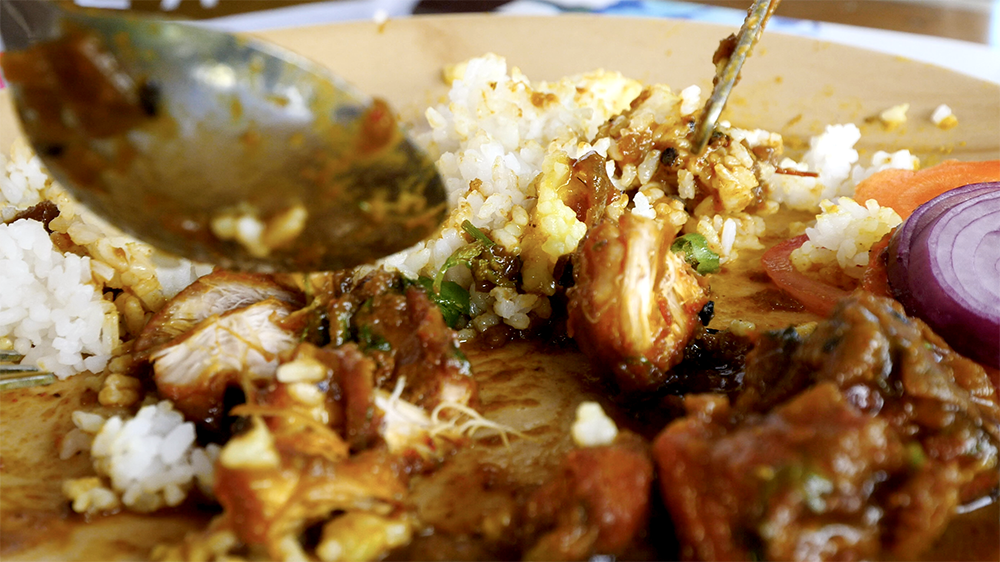 Then I tried the Indian-style French fries with rice and curry. The fries were small and crispy and added a nice texture.

After lunch, it was time for our second game drive of the day in Manas National Park! I really wanted to see a tiger. There are only 36 tigers in the park, so sightings are very rare, but I was hoping to get lucky. 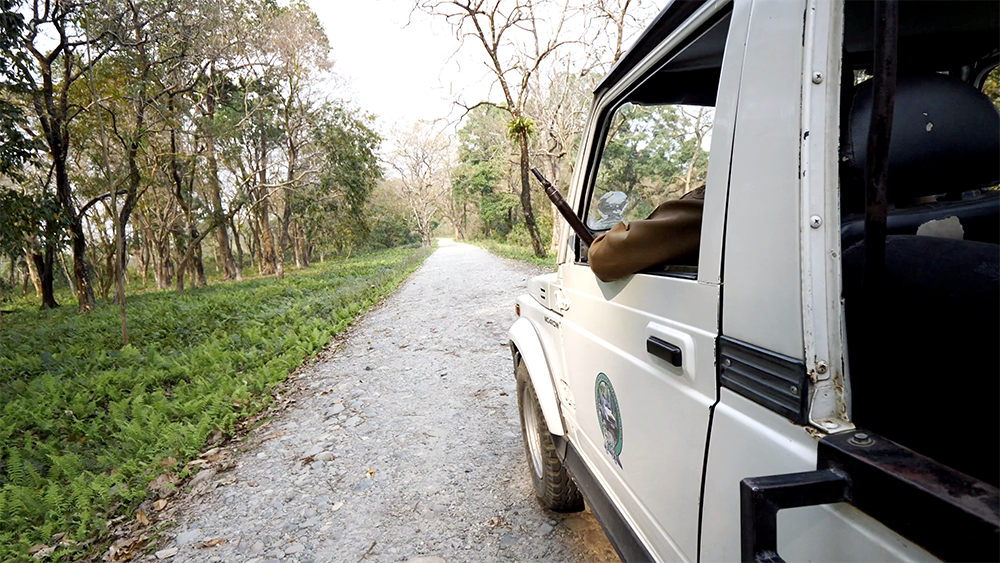 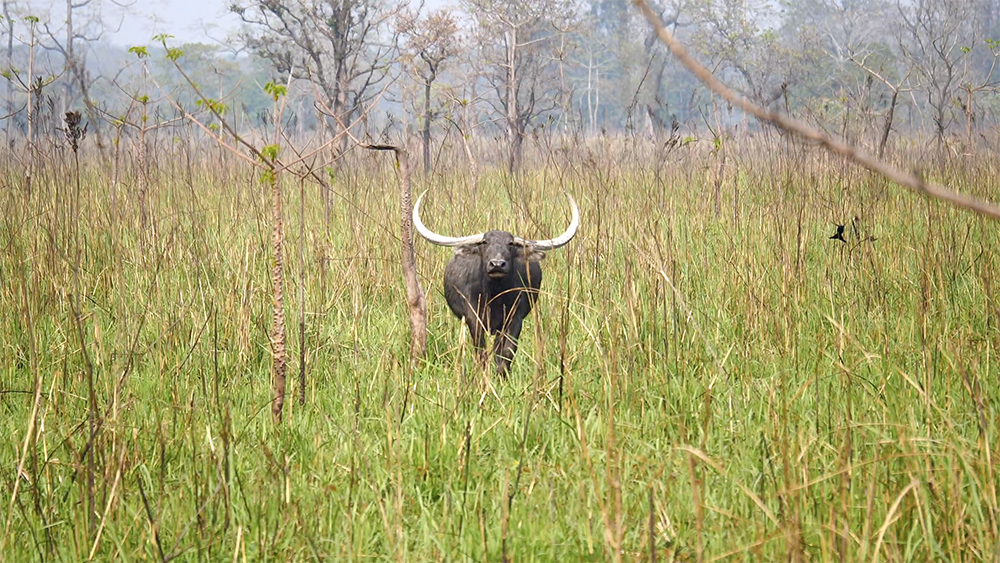 Almost right away, we spotted a bird with an orange head that can mimic your voice, along with a peacock. Next, we saw a family of hog deer. I learned that there are also black panthers and leopards in the park, but they’re very hard to see. Keep your expectations low when you’re on safari! That way, when you see something, it’s amazing! 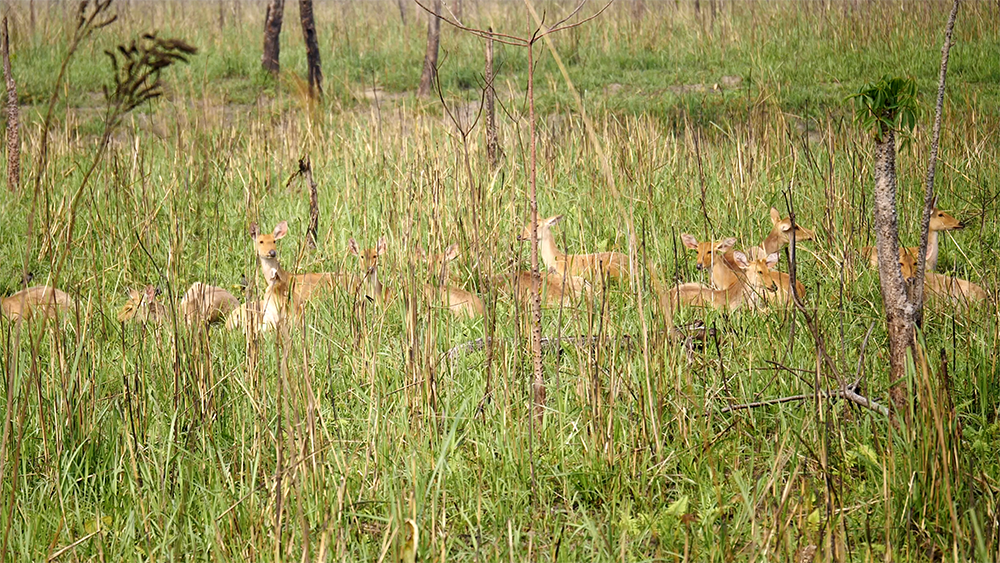 For our safety, the guard who came with us would not allow us to get out of the vehicle under any circumstances. 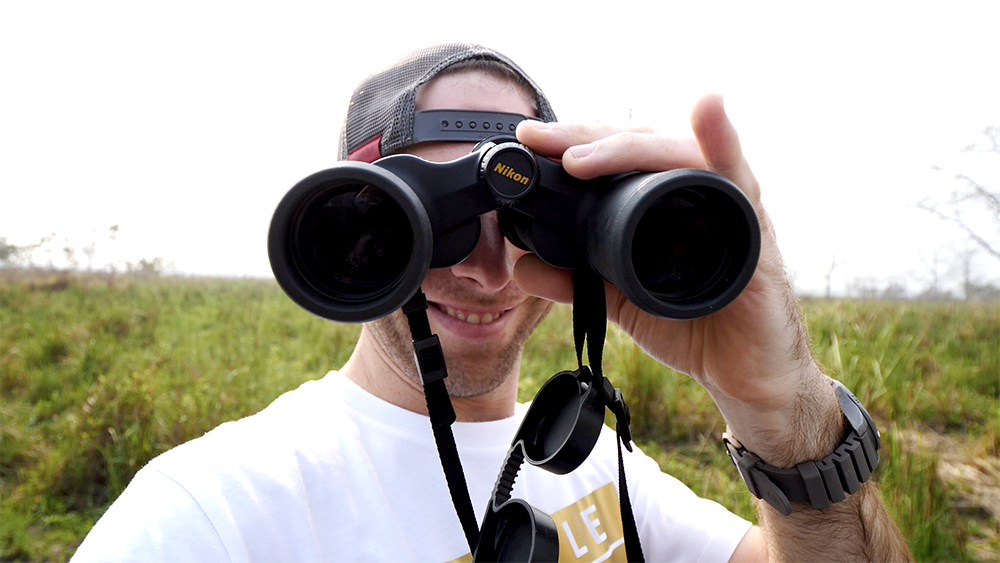 We spotted more peacocks and a pair of water buffalo—a mother and a calf. We also found a large family of deer. Next was an eagle I needed to use binoculars for, followed by a herd of elephants! We also spotted a large male with big tusks!

Then, we came across park guards riding on elephants they had tamed. We were approached by a baby elephant and then had the awesome opportunity to watch the elephants bathe and splash around in the water with their guards! It was so beautiful to watch! I’d never seen anything like this before. This unbelievable Asian elephant encounter was such a special moment. 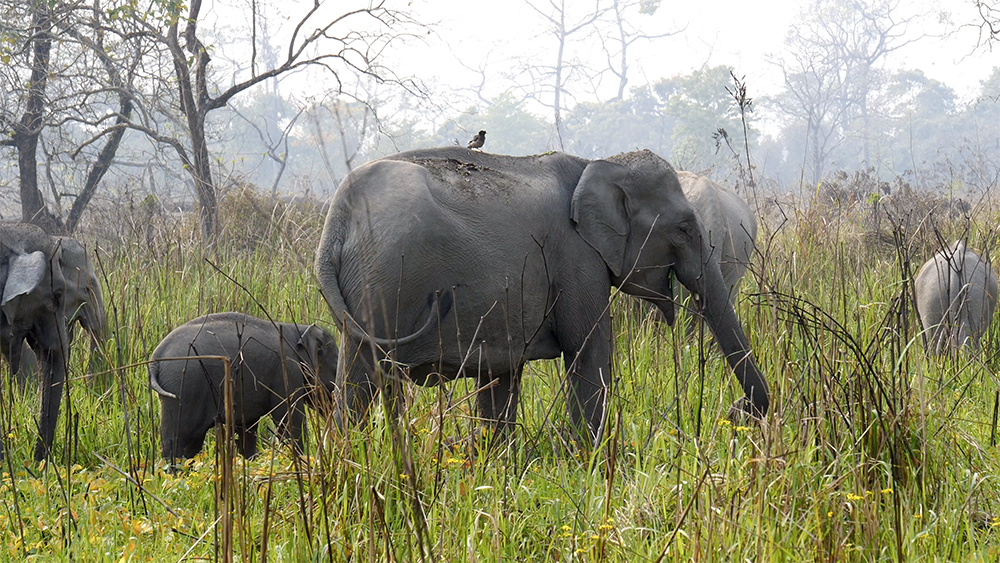 After that, we found herd of 6 elephants, followed by an Asiatic water buffalo. We also spotted tiger claw marks on a tree before arriving at the banks of the Manas River, where you can find lots of turtles and fish. The water is crystal clear and on the other side are Bhutan and the Himalaya Mountains! 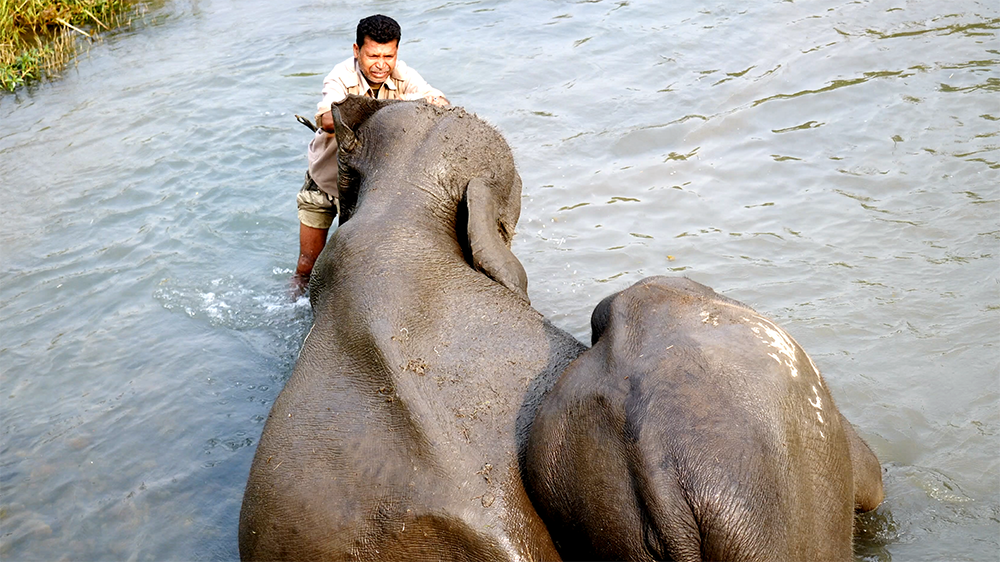 We finished off our game drive by spotting some endangered golden langur monkeys in the trees overhead! 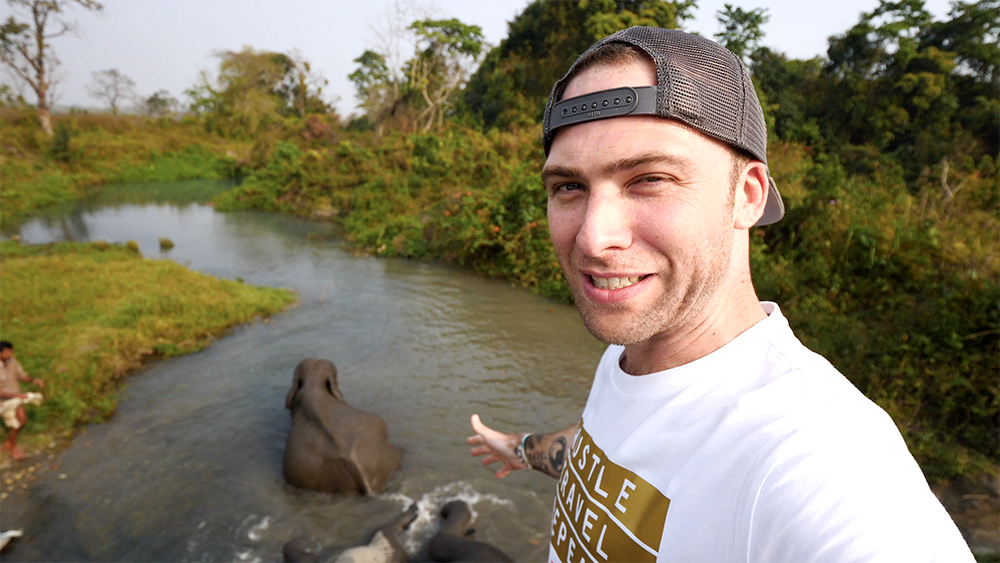 If you liked coming along on my second game drive and seeing my epic Asian elephant encounter, please give the video a thumbs up and leave me a comment! Also, please subscribe to my YouTube channel so you don’t miss any of my upcoming travel/food content!