Day four in the beautiful state of Kerala, India continued in the town of Kumily in the beautiful Thekkady area. There, I had the pleasure of witnessing a traditional cultural performance and helped make some delicious Indian food! Come along with me as I check out a traditional Kathakali eye dancing performance and make some Kerala beef roast and parottas in Thekkady, India!

After our 4.5-hour road trip from Alappuzha, we hit the ground running in Thekkady. Thekkady is located in the Idukki District, which is up in the hills and mountains further inland. There are tons of tea plantations and a tiger reserve nearby! 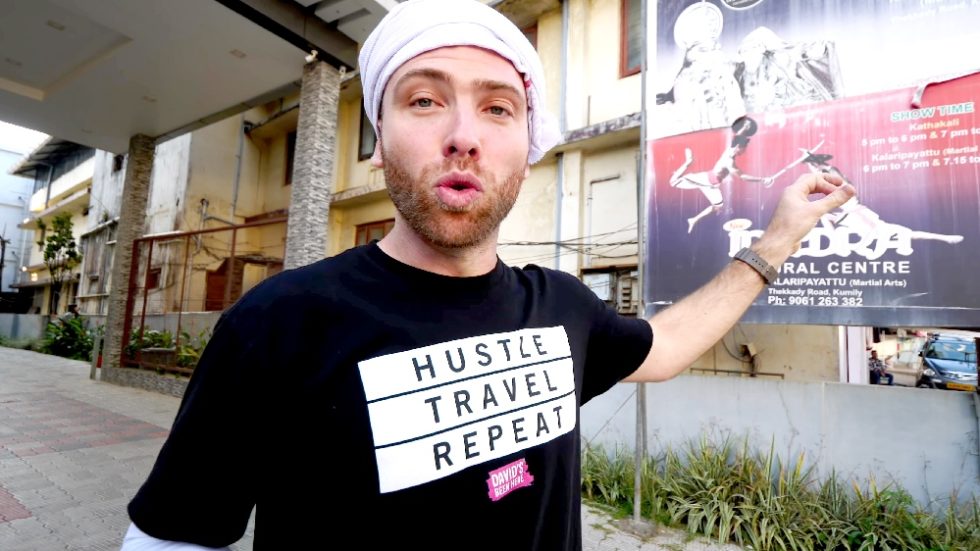 I was super excited because I was about to immerse myself in a true cultural experience at the Mudra Kathakali Centre. There, I’d get to witness an authentic Kathakali performance and a martial arts performance called Kalaripayattu! Each show costs 200 rupees/$2.67 USD. The Kathakali started at 5 p.m., and the Kalaripayattu was right after it at 6 p.m. I couldn’t wait to go in and watch! 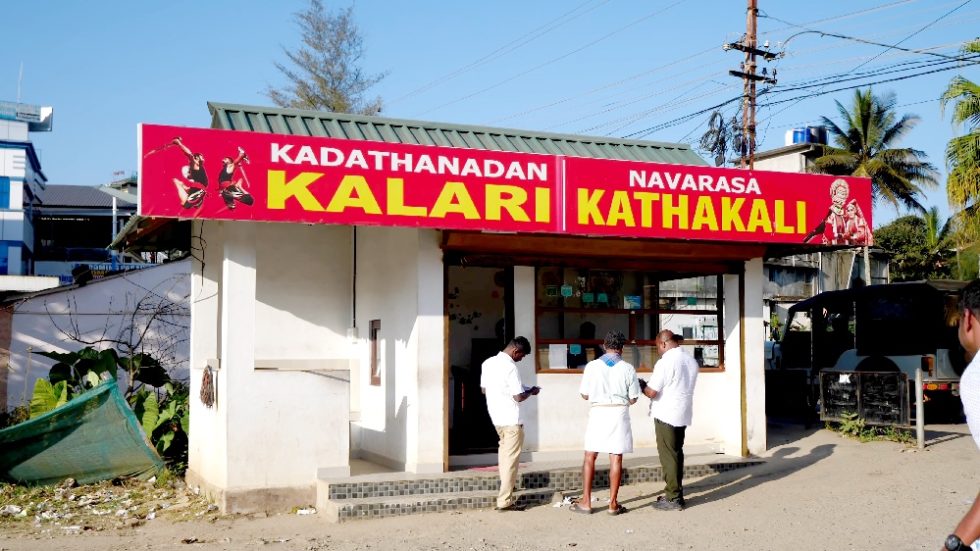 I had a reserved seat front and center in the first row with my boy Dennis from the Woodnote Resort. For the first ten minutes, they prepared the main performer’s clothing and put the jewelry on him. He wore vibrant green makeup and a really elaborate costume! The makeup takes about 30 minutes beforehand. 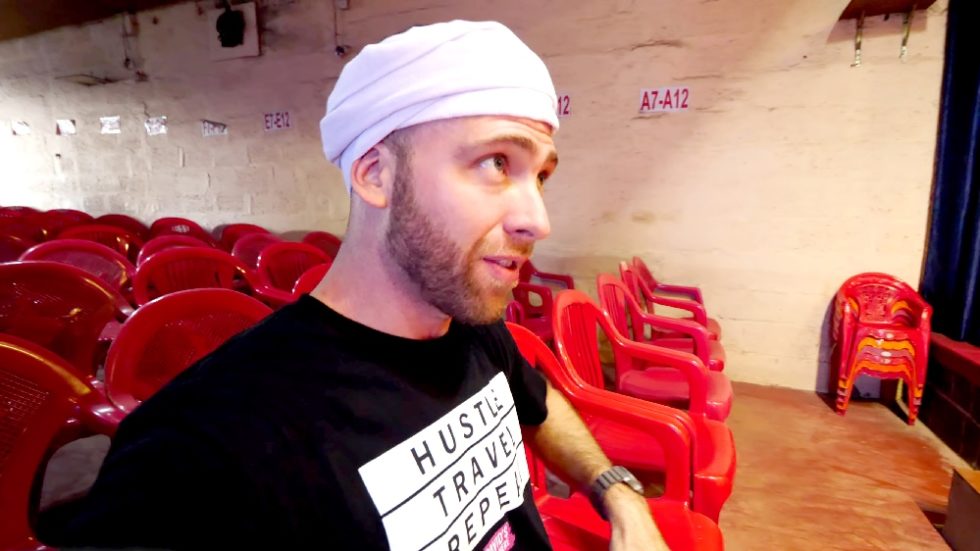 The show started with some drumming and a different performer wearing yet another colorful and elaborate costume. One of the prominent elements of Kathakali is eye dancing, where the performers move their eyes and faces in an exaggerated way in time to the music. It takes years to be able to do it correctly and is really cool to watch! 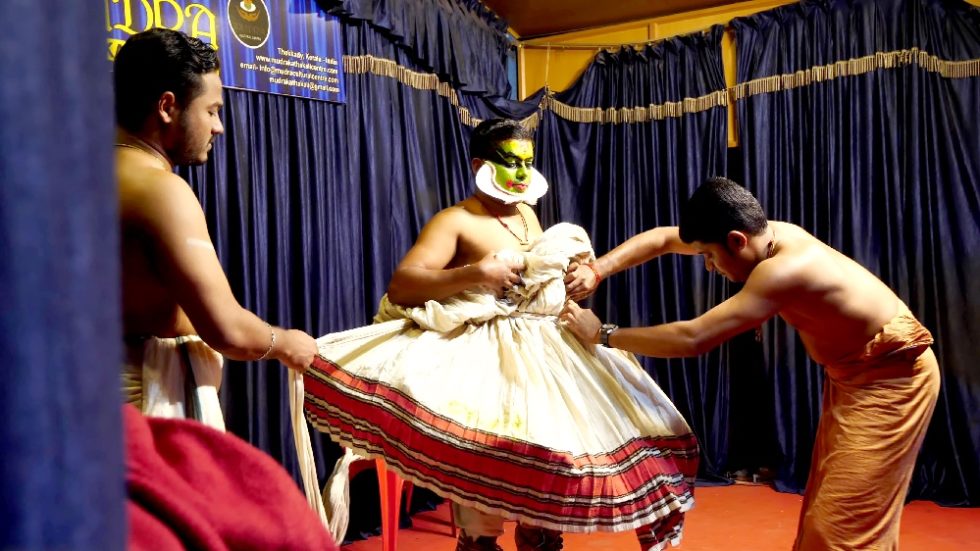 Then, it got pitch dark as the real traditional Kathakali performance began inside this small theatre in Thekkady, Kerala, India. The performer who had been onstage was joined by the man with the green-painted face. This time, they started incorporating arm movements and dancing while the drummer played and a singer sang in the background.

Kathakali is a form of Indian classical dance and Hindu performance art. It’s a storytelling medium whose roots are based in the temple and folk arts, which date back to the first millennium CE. The stories they tell usually involve folk mythologies and religious legends from Hindu epics and the myths, legends, and traditional lore of the Puranas (a wide genre of Indian literature). 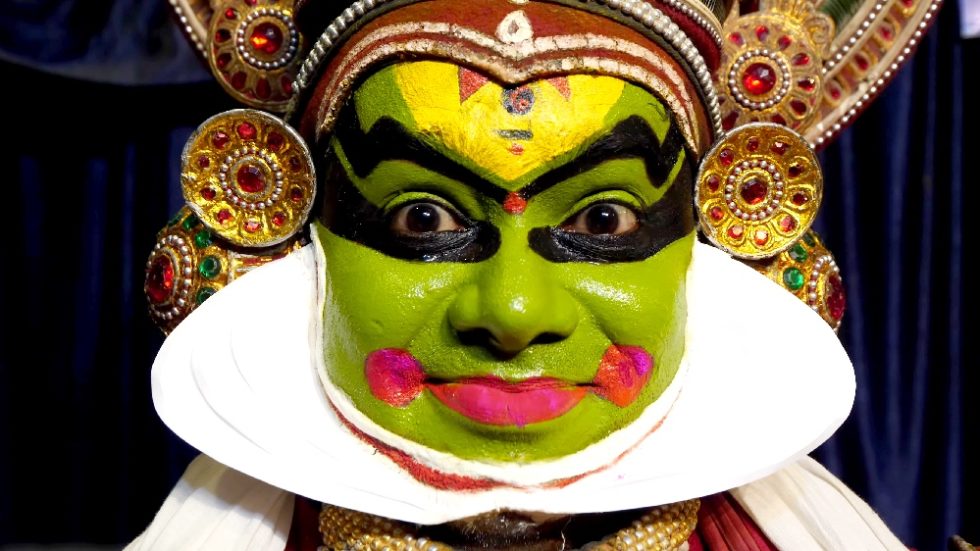 The performance was such a wild and epic experience! Afterward, you can take photos with the characters onstage and make a donation if you wish. But the martial arts performance was starting in another room, so we had to run to make it there!

This performance was held in a huge room with a rectangular pit in the center. Down in the pit, they introduced the performers, who then worshipped the walls, the weapons, God, and themselves. Then, the show began with some sword fighting with shields! Then, they moved on to a form of stick fighting and whirling a metal rod while doing acrobatics! The guy twisted and turned the rod so fast that it was blur!

The show continued with performers walking on their hands, doing flips, flipping over each other. One of the performers climbed up to the upper level and shook my hand. Then, they did some fire dancing and flipping through a flaming ring! 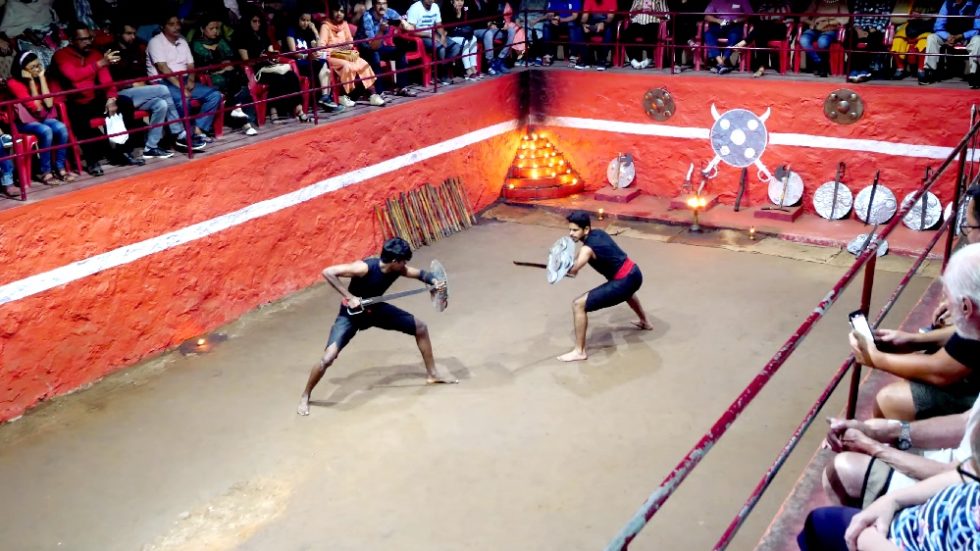 The performance was really awesome, but I had built up an appetite. I couldn’t wait to get back to the Woodnote Resort to have some dinner. Dennis told me we’d have some Kerala parotta and beef roast at their on-site restaurant, Drizzle. 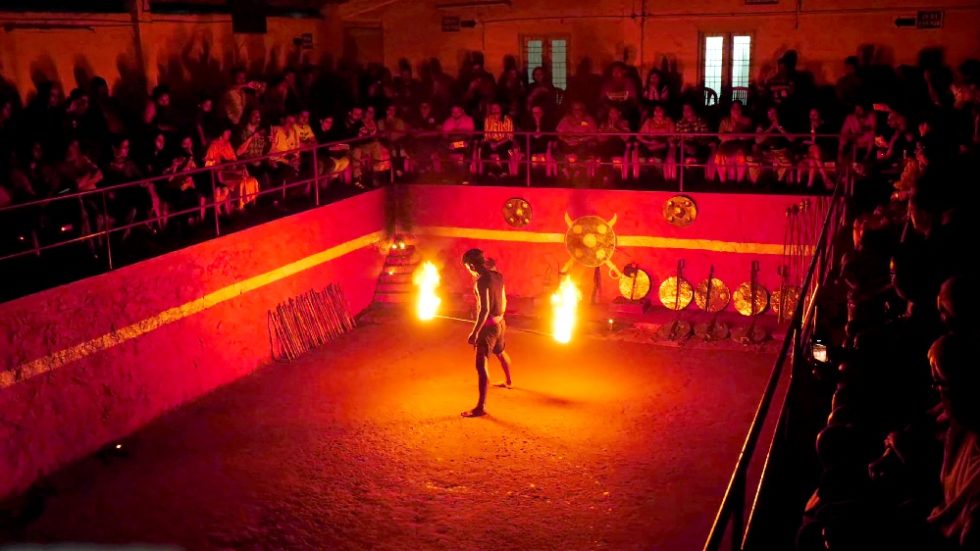 There, I met back up with my boy Ebbin. Our dinner was buffet-style! Everything looked so good! There was paneer, butter chicken, ghee rice, and more. My mouth was watering just looking at everything. The aroma of the ghee rice was amazing. I could smell the ghee and see cashews and onions in it. 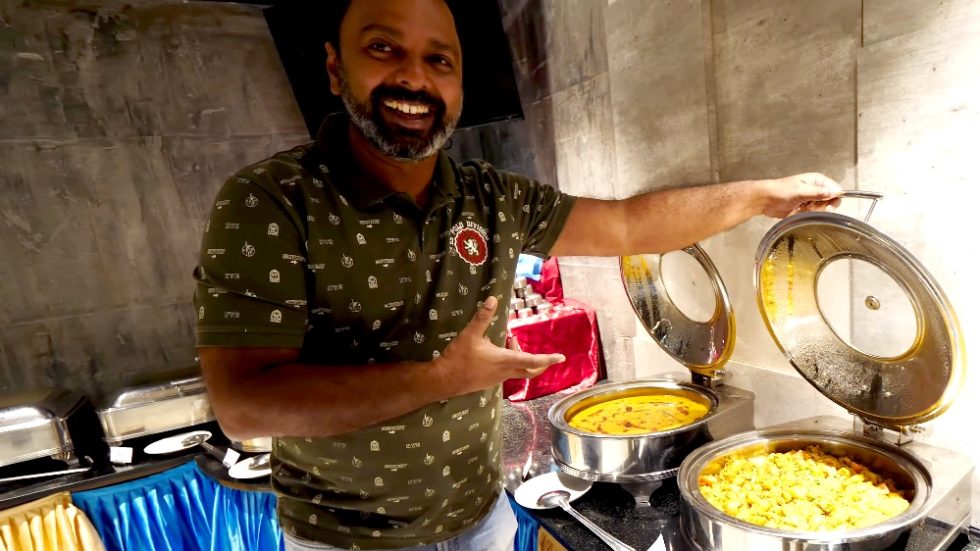 I headed to the kitchen to see how they make parottas and beef curry. The cooks rolled out the parotta dough, rubbed it with oil, floured it, cut it, and flipped it around and slapped it on the counter. Then, they roll them up and let them sit for 10 minutes to expand. 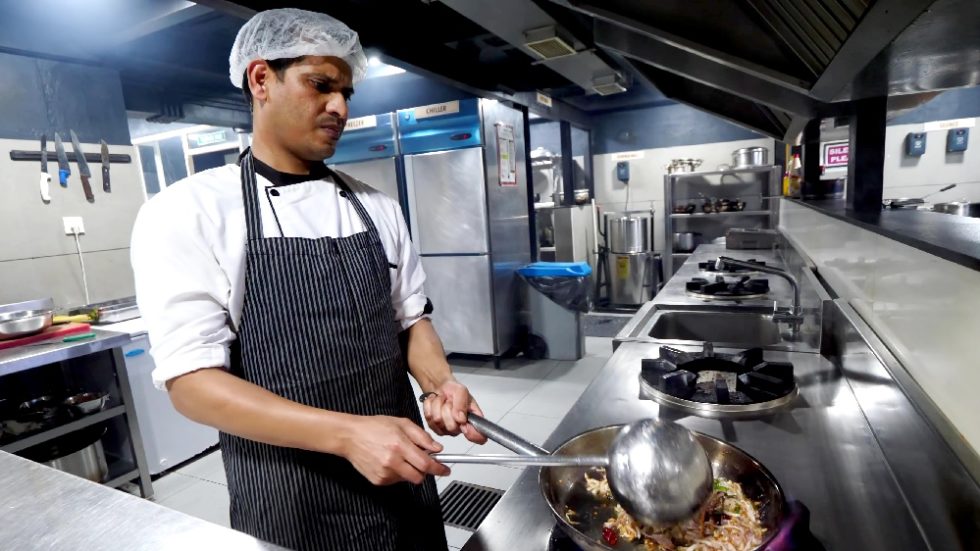 I watched them add onions, garlic, and ginger to a pan and brown them. Then they add masala and spices, and finally the beef. The chilies in it hit me hard in the face as I watched.

Then, we went back to the parottas, which had expanded. I watched as the guy pressed them flat with his hands and fried them in a pan with coconut oil. It looked amazing! Once they finish cooking in the pan, you smash them together with your hands to make them fluffy! I watched the cook do it first and then it was my turn, but they were so hot! 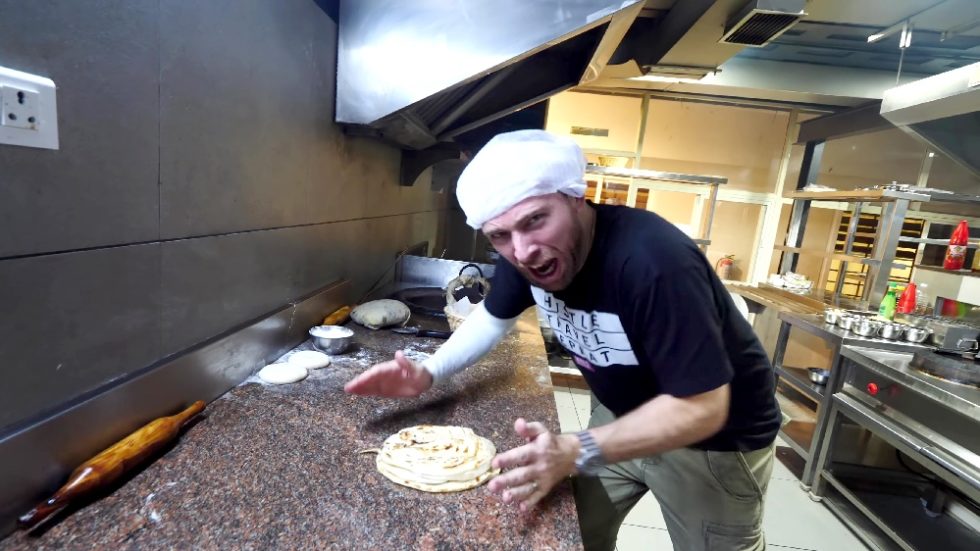 Back in the buffet area, I got some ghee rice, paneer, and butter chicken. It was so vibrant and colorful, I wanted to just lick it! Then, the beef roast and parottas arrived at our table. 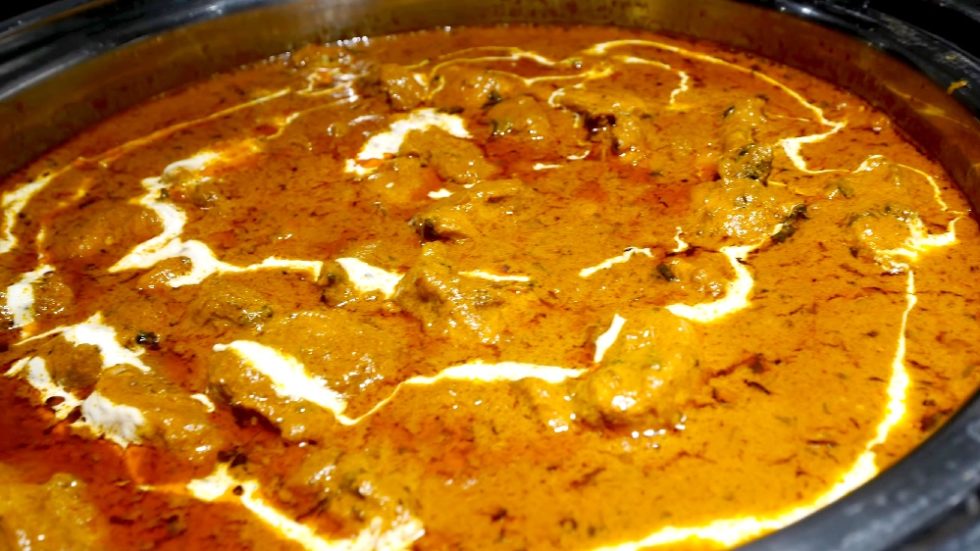 I served Dennis some beef roast first and then grabbed a huge, layered parotta. I tore off a bit and tried it with the beef. There were so many layers, it was hard to tear apart with one hand! The beef roast was probably the best beef I’ve ever had in my life. It contained lots of onion but wasn’t too spicy. It was unreal! I loved the tomatoes and curry leaves in it as well. 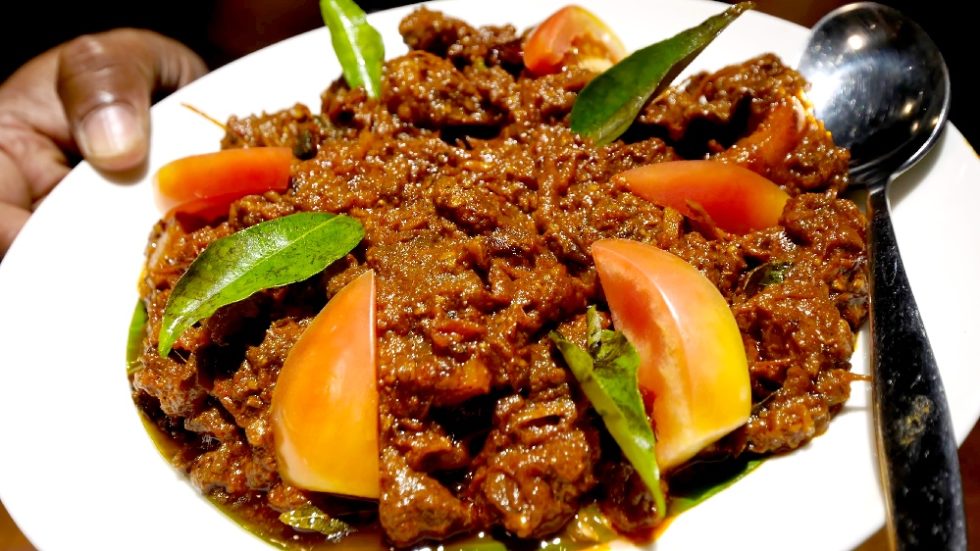 The parottas were so flaky and you could tell they were made with love! They were made from refined wheat flour, so they were a little different. The beef roast was so good that I wanted it all to myself! And the combination of textures was unbelievable. The coconut milk flavor also really burst out of it! It helped bind it all together. It was almost like the meat had been melted and stripped away.

Then, I tried the ghee rice with the paneer. The rice had absorbed all the curry and was really different. The rice was swimming with ghee, though. The curry was very similar to the butter chicken curry. The butter chicken was amazing! Then, I mixed the beef roast with the ghee rice. I loved the combination! It was really spicy, though. My tongue was basically dead at that point! 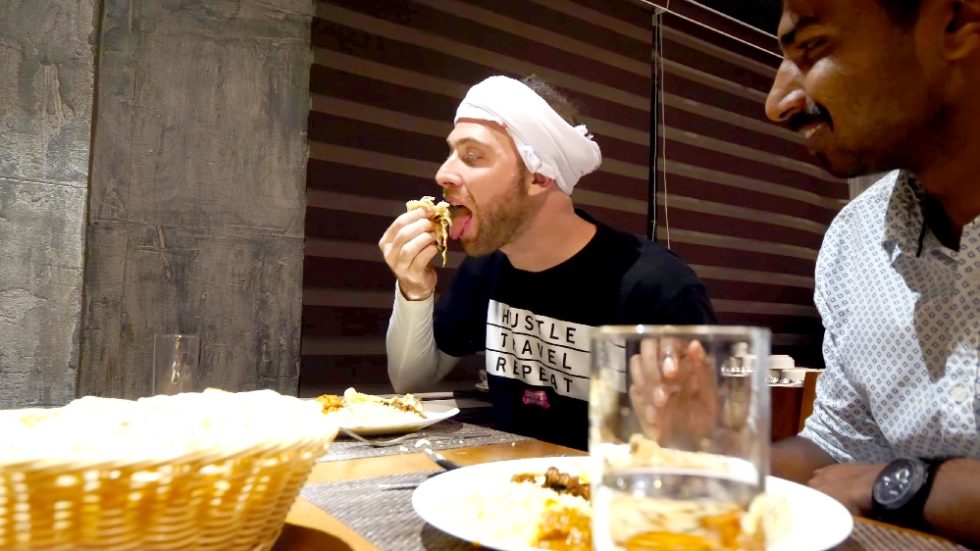 For dessert, we had gulab jamun, a northern Indian dessert. I loved the sweet syrup and mushy texture. What an amazing way to end my night! From the traditional Kathakali performance here in Kerala to the food, this was a night I’ll never forget! Huge thanks to my boy Ebbin for bringing me to Thekkady to experience the traditional Kathakali performance in Kerala, India! Be sure to follow him on YouTube and Instagram! 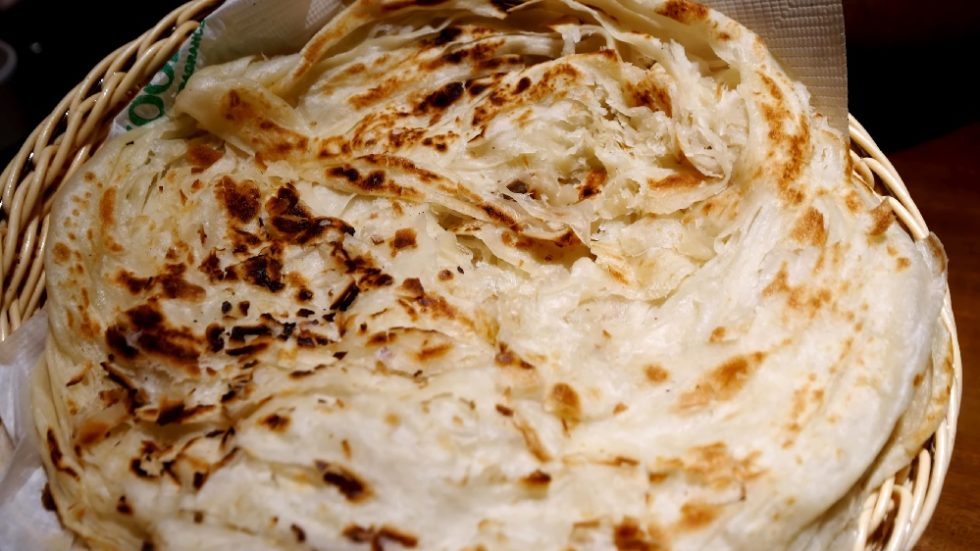 Also, if you want to stay at the best hotel in Thekkady, you have to check out the Woodnote Resort. Their rooms and suites are out of this world! Give them a follow on Instagram and be sure to check out their website to book a stay there! 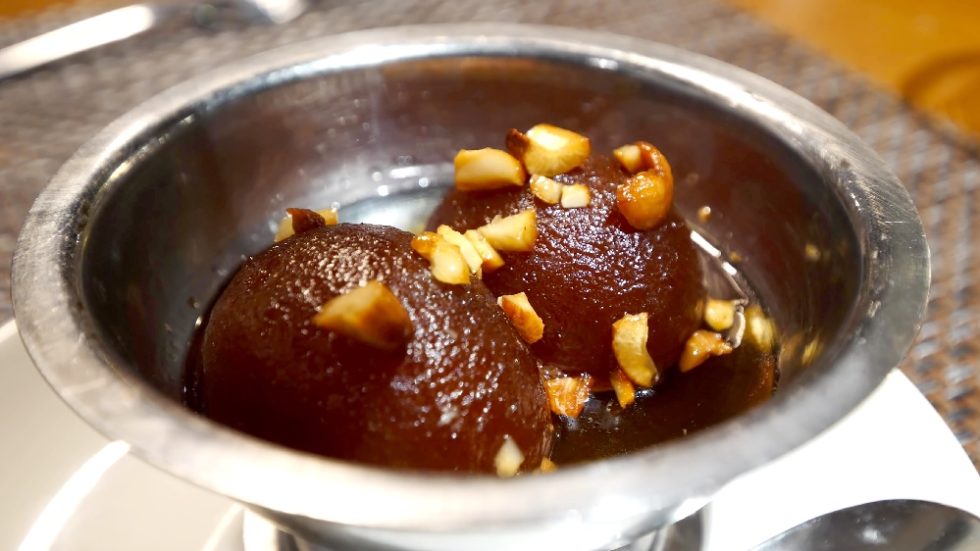 I hope you enjoyed coming with me to experience a traditional Kathakali eye dancing performance in Kerala, India! If you did, please give this video a thumbs up and leave a comment below. Also, please subscribe to my YouTube channel and click the notification bell so you don’t miss any of my travel/food adventures around the world!