My incredible third day in God’s Own Country, Kerala, India began with an amazing treat I had been looking forward to for some time: my first meal at a toddy shop! Join me and my boy Ebbin as we enjoy spicy Indian food at a Kerala toddy shop, including crab, fish, and coconut toddy, in Alappuzha, India!

My day started before dawn in the beautiful Kerala Backwaters near Alappuzha. It was only 6 a.m., but I was already primed and ready for my first adventure of the day: a canoe ride through the backwaters! These gorgeous waterways are super peaceful and relaxing. I was excited to get one last look at them before continuing my journey through Kerala! 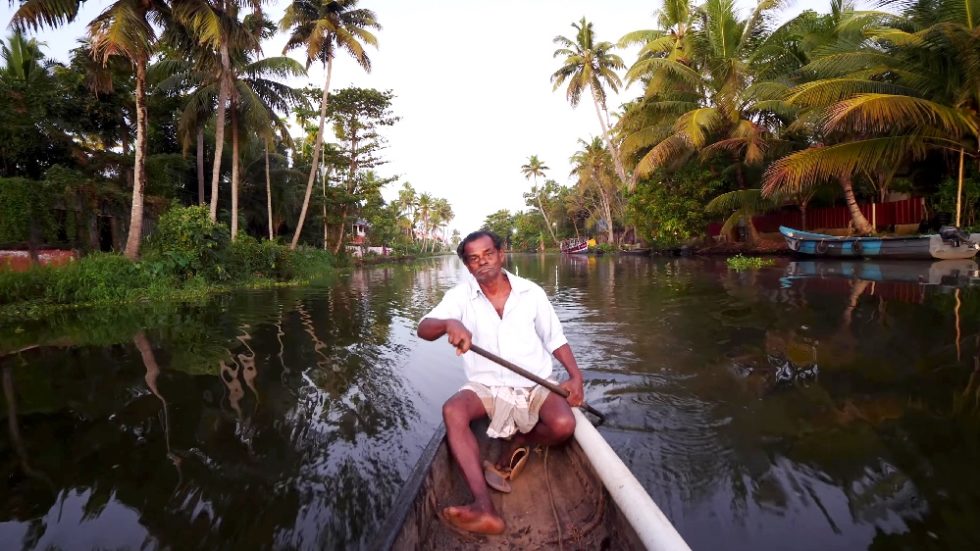 I carefully boarded the canoe, followed by my boy Ebbin. We were in for a 30-minute ride on the canal. We caught a morning prayer, which we could hear emanating from a nearby building. The golden, early morning light was so calming. I could hear lots of birds, including some diving into the water for fish. The pinks, oranges, and yellows of the sunrise against the sunset and calm waters were stunning. There was even a light mist hanging over the water, which added to the beauty! 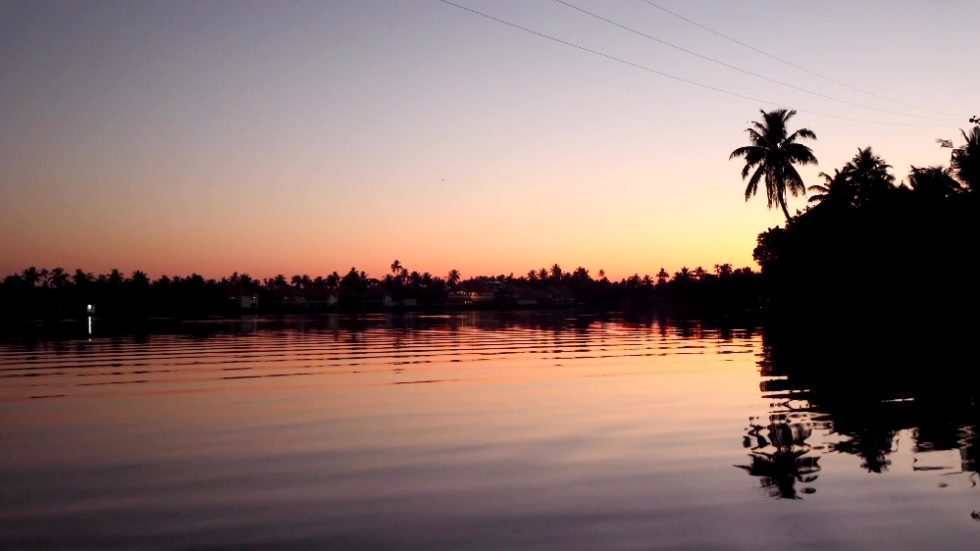 I learned that there aren’t so many roadways in this part of Kerala. The roadways here are new. There are actually more waterways, so this is how the locals get around to do their day-to-day business. As we rode down the canal, we saw some traditional-style houses. There was also a large, traditional two-story house with a fence, as well as a modern one. We also passed by modern and traditional houseboats, a church, and more.

We also passed by a floating bridge that connects two islands. It’s used at certain times so cars can cross. We met a local fisherman who had left his nets in the water overnight and had caught 6 or 7 fish! 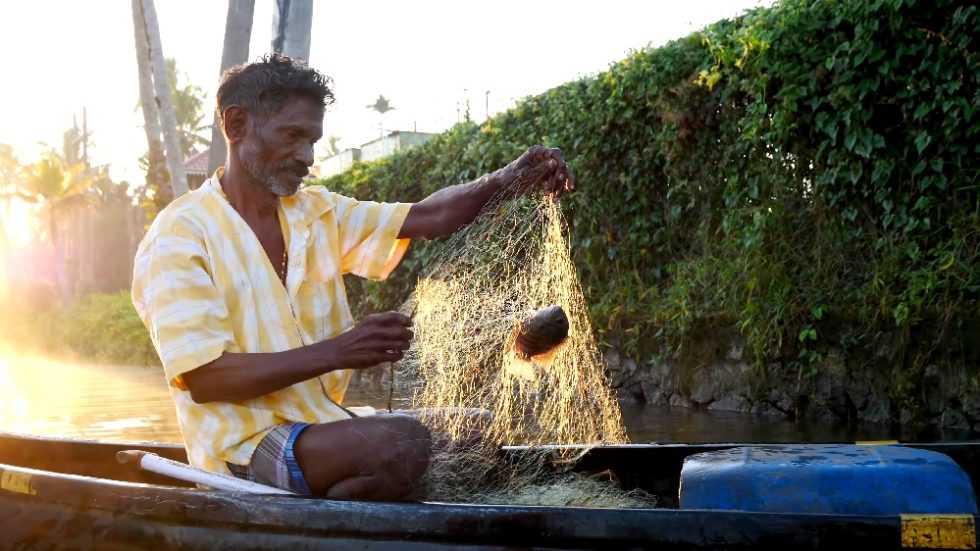 From the canal, we emerged onto Meenappally Kayal Lake, where there is a boat race in the autumn. We were almost done with our boat ride. I was getting hungry and couldn’t wait to have some Indian food for breakfast on our houseboat as we made our way back to Alappuzha, India! I was ready to have some tata dosas! 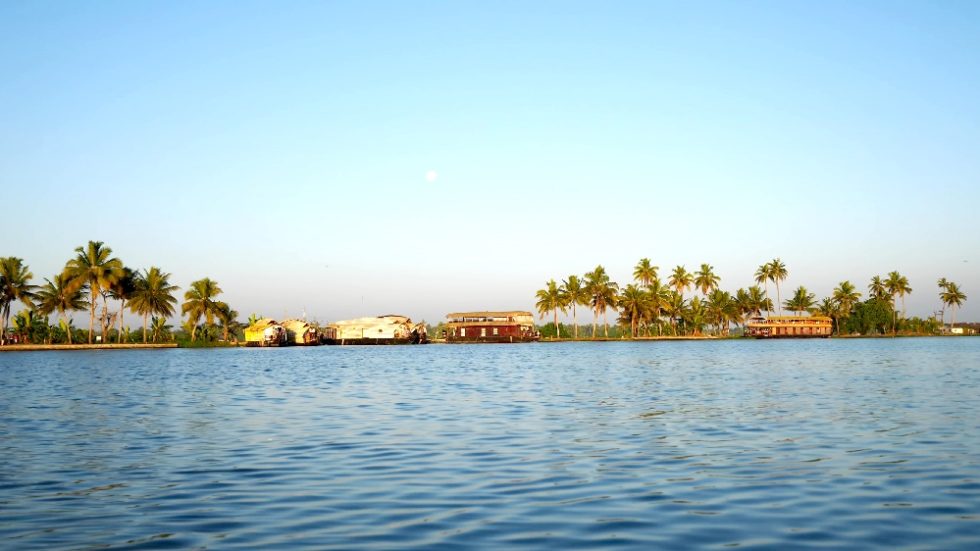 The Backwaters were coming to life. The houseboats were gearing up to leave and there were tuk-tuks everywhere. You can book a houseboat for however long you want: one day, two days, even a week. We were heading back to the port area. Along the way, we’d see more waterways and enjoy our meal! 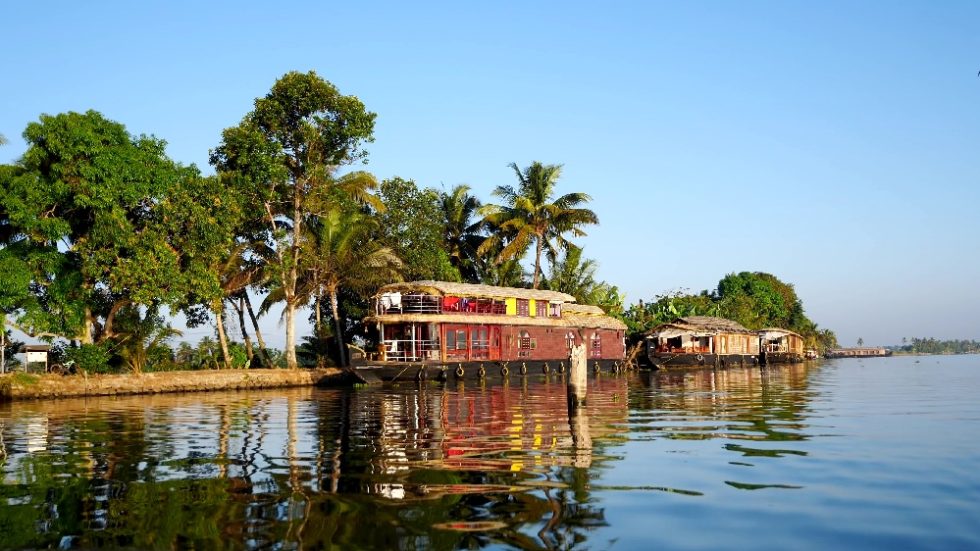 In Kerala, traditional dosas are smaller in size. Ebbin served me a couple along with some coconut chutney and sambar. In Tamil Nadu, you’d get ground peanut chutney. I also got a piece of an omelet. I tried the dosa with the coconut chutney first. It was so phenomenal and had a strong gingery flavor and large chunks of coconut in it. The omelet with the onions and chilies was also really good. I had never thought to mix dosas with eggs, but it was an amazing combination!

Then, I went with the sambar, which had huge pieces of carrots and other vegetables in it. I noticed that the sambar was slightly different depending on the location. For example, sambar in Andhra Pradesh is thicker and spicier! The chutneys differ as well. 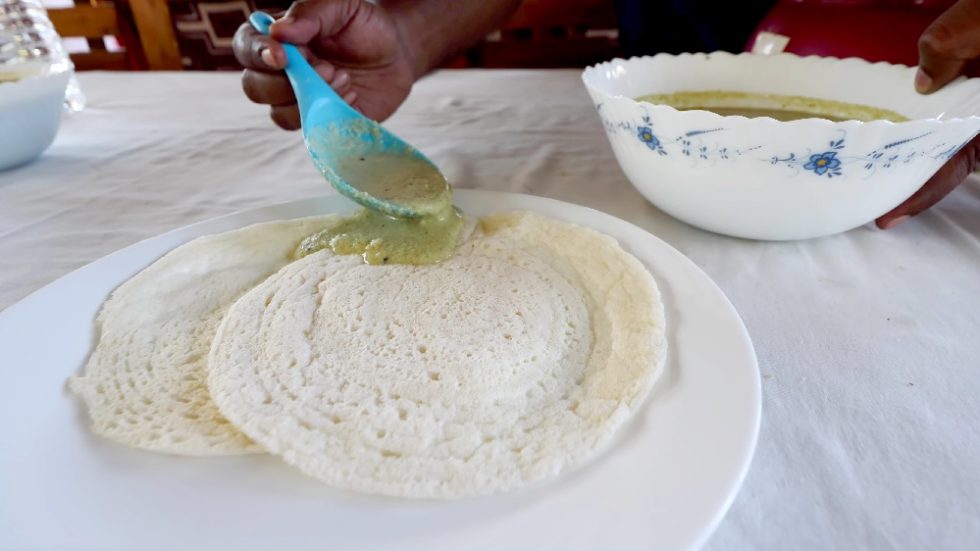 The dosa was very light and airy, so it broke apart well. This one was spongy, while the one I’d had the previous day was more like an American pancake. The dosas are made from lentils and rice, which ferment for 6-8 hours. It’s similar to food in Ethiopia. 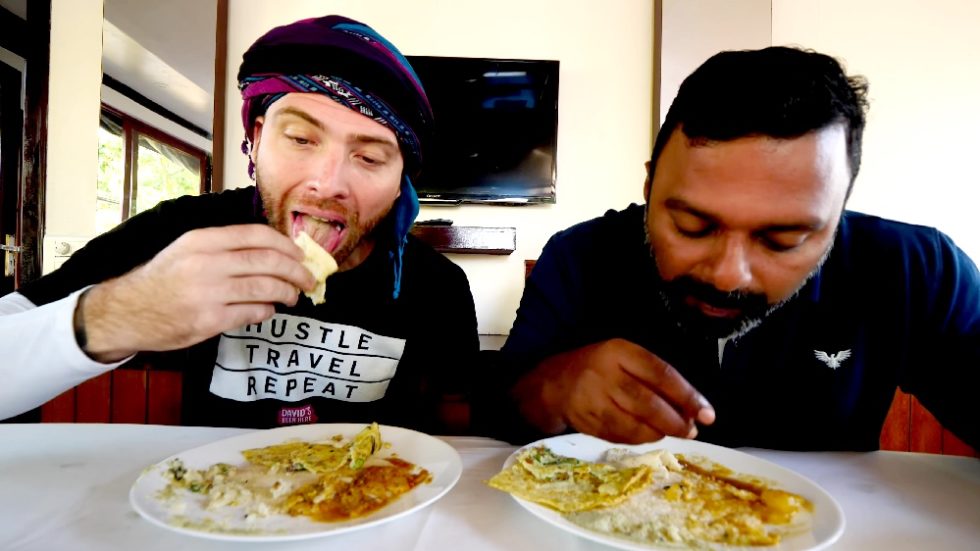 Breakfast was incredible! I enjoyed my chai on the front deck with the captain. There were seven houseboats out on the water with us. Everyone was heading back to port! What an adventure! I was truly in awe of this place. I could have spent another day there, but activities are limited. You can’t swim there, but it’s still an epic, one-of-a-kind experience. 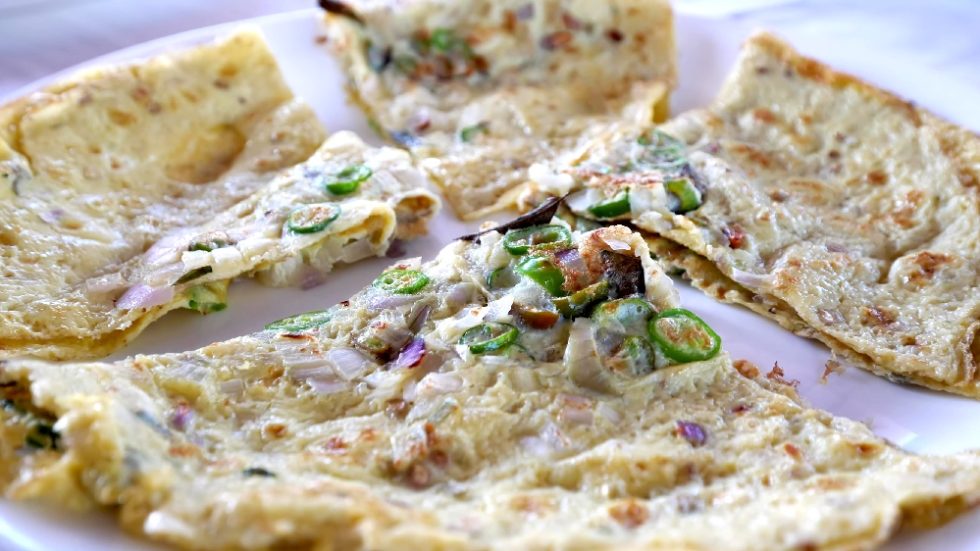 We followed the dirt path back to Ebbin’s car. We hit the road back to Alappuzha, where we’d stop at a toddy shop. The New York toddy shop has different tents named after different U.S. cities, including Washington DC, Chicago, and my hometown of Miami! 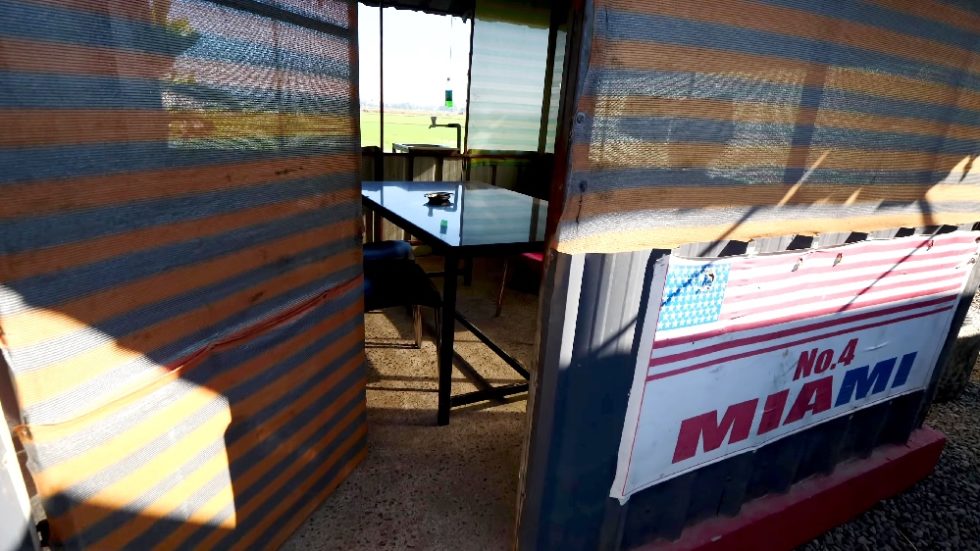 Along the way, we passed hundreds of acres of rice fields, farming communities, vendors selling bananas, and more. The toddy shop is pretty well-hidden, so you have to know it’s here. Next to the toddy shop is a huge rice field where there were guys fertilizing the crops. It was so cool that the different rooms were named after U.S. cities. I wanted to eat in the Miami one! From there, we had a great view over the rice paddy fields. I couldn’t wait to dig into some spicy Indian food before leaving Alappuzha, India for our next destination!

Here, you eat spicy crab, shrimp, and fish while enjoying toddy, which is a wine made from the fermented nectar of the coconut flower. The man working there has a special knife he uses to tap the coconut flowers. The nectar ferments within hours and becomes very sour. When it’s fresh, it’s sweet. 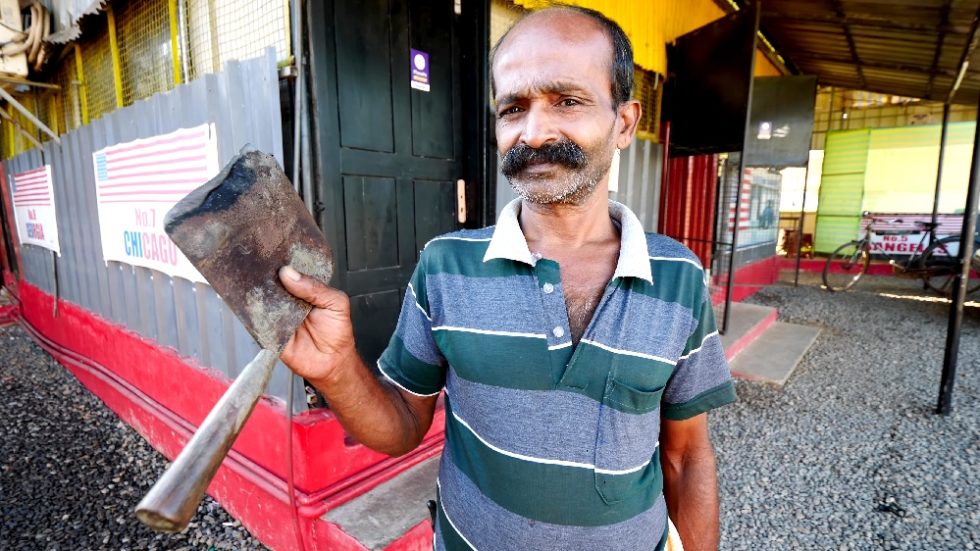 We saw the freshwater fish they’d cook for us. They were jumping out of the water. I washed my hands and toasted with some toddy. It was much sweeter and better than the kind I’d tried the previous day. It was sweeter, so it had just been made. 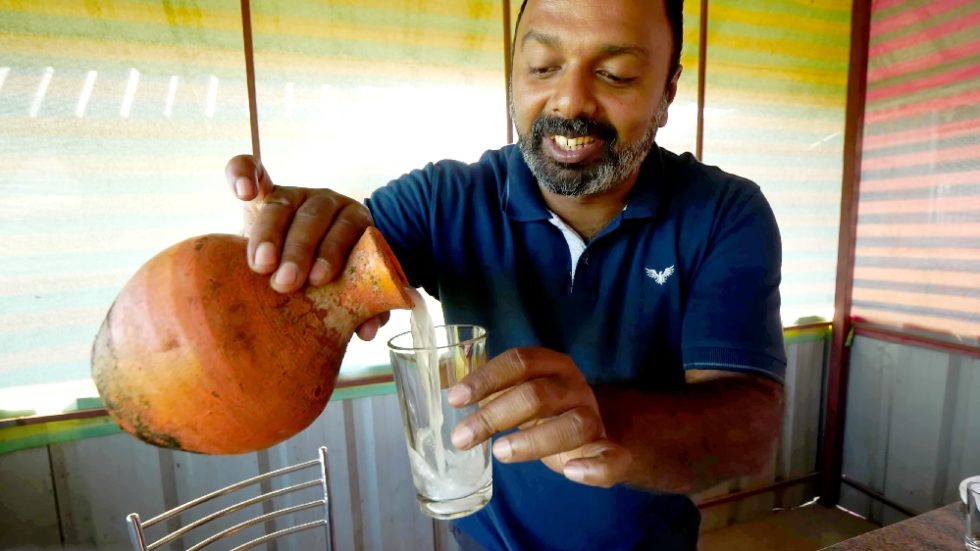 Then, it was time to eat! Ebbin loaded my plate with puttu, a pancake called appam, fish fry, shellfish, crab, and gravy. We had seven dishes in total! I met a local travel vlogger named Shameer, who’d be dining with us. I was so ready to dig in! 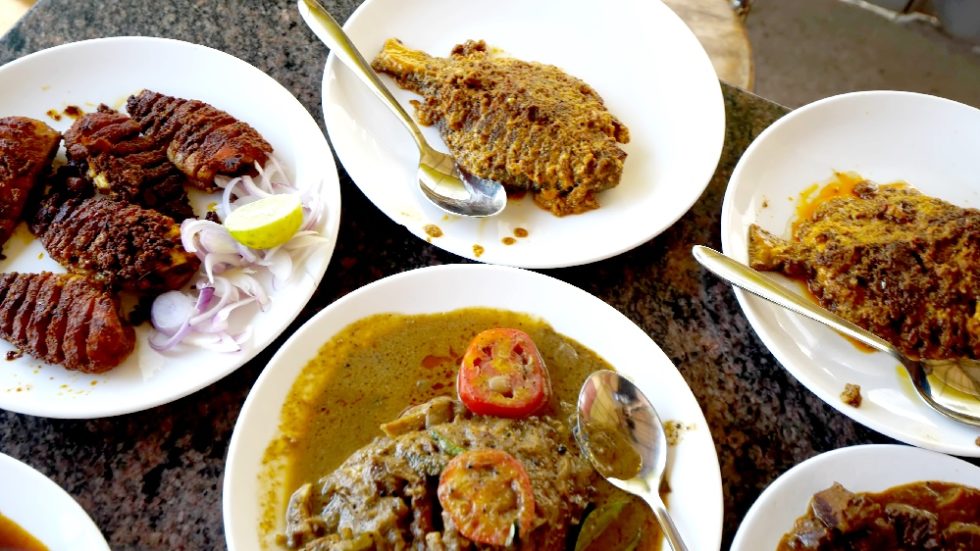 We started with the puttu, which we mixed with the gravy. The rice flour and coconut from the puttu along with the light crab gravy was incredible. The vegetables and curry leaves in the gravy were fantastic. I also loved the airy, crumbly puttu. It blended well with the gravy. 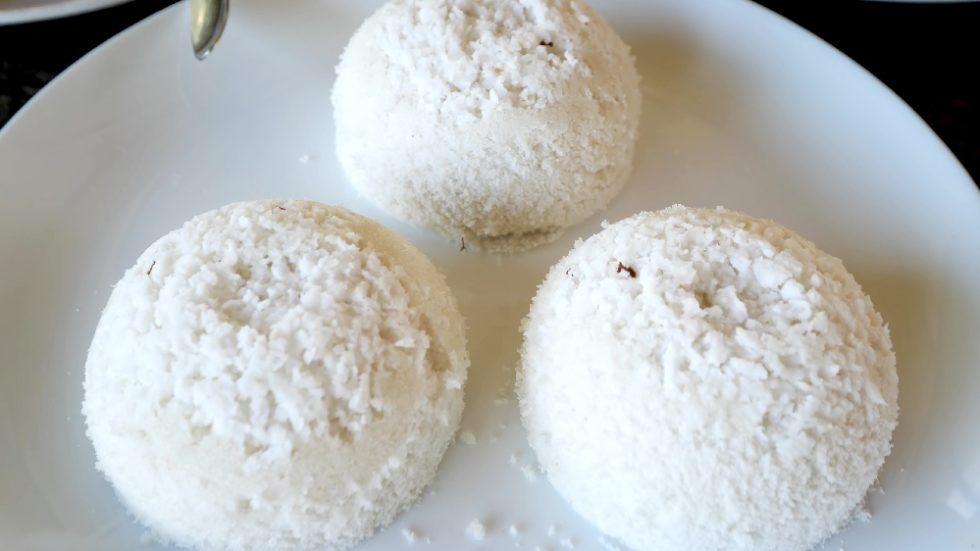 Then, I tried the crab flesh with the puttu. It was a little hard to get but it was so worth it! The crab was local, from the brackish water. It was hard to crack the shell with one hand, but I managed to get more meat. The flavors and freshness were amazing. It wasn’t spicy, but it was still so good!

Check out my article Escaping the Coronavirus: My 36-Hour Travel Nightmare

I continued to break the crab shell and sucked out all the flesh from the leg. It was so succulent. I had to work for the flesh! I’ve eaten crab and lobster my whole life, but they’re usually easier to get into because they’re bigger. These crabs were smaller. This was my first time having crab in India! 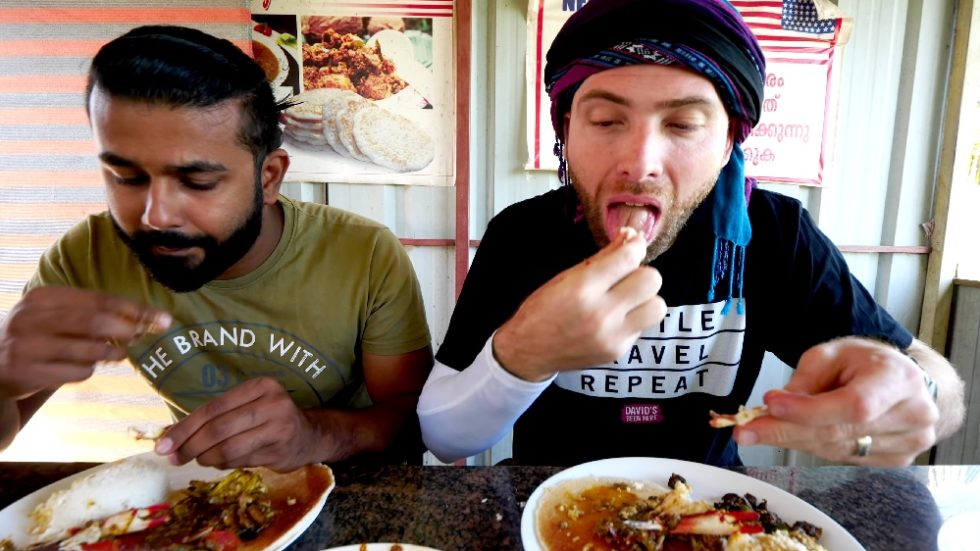 Next, I sucked all the flesh out and then moved on to the mussels with chilies and onions. It was the best thing ever! It was like a mussel stir-fry! The pancake also had toddy in it as well as chilies, so it was spicy. It looked like an American pancake but it wasn’t sweet at all. It was more sour and was really good! It’s also savory because you put gravy on it instead of syrup. 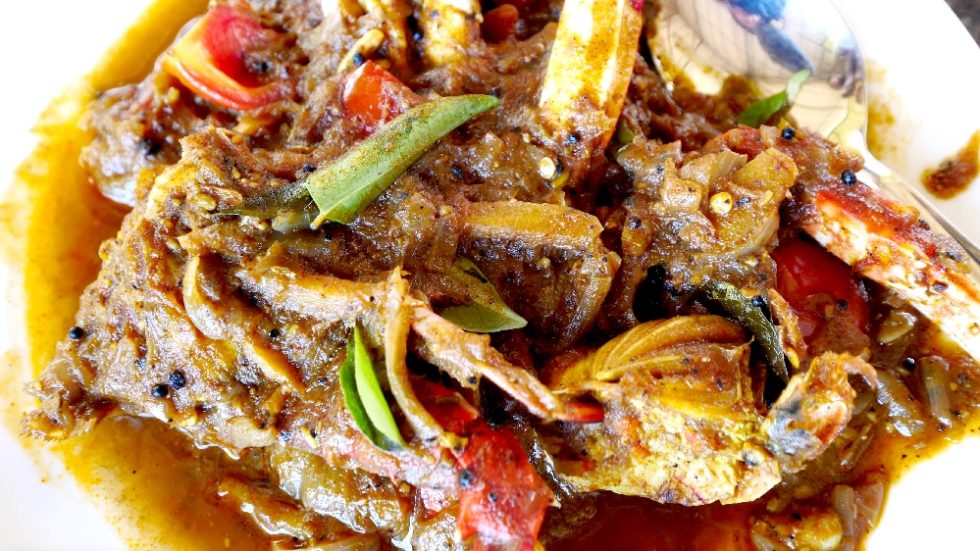 The fish fry was perfect. I loved the soft flesh and the batter on it. I tried a bit more with onions. It was spicy! Then I had more of the toddy, which cooled down the spice and cleansed my palate. It was so delicious. I loved the sweetness, sourness, and thickness of it! 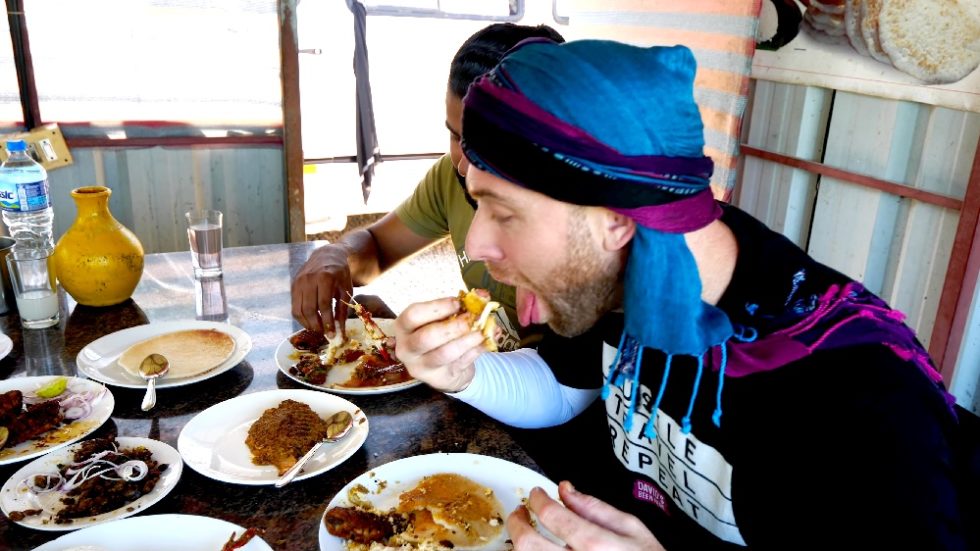 Then, I tried a huge piece of river fish. I got the entire tail! I searched through it to get rid of any bones and dug in, but I had to be super careful because the bones were really small. Then I took some of the flesh with the appam, which was nice and spicy. I actually liked the flesh of the freshwater fish more than the saltwater fish. I tried some with the onion, which was so good! The flesh was so soft and the creamy gravy on top was unbelievable! But it had my mouth burning!

Check out my VIDEO: Birthplace of Buddhism in Sri Lanka: Touring the Temples of Mihintale

This experience was incredible even though my mouth was on fire. My favorite things were the mussels. They had no bones and were so tasty! 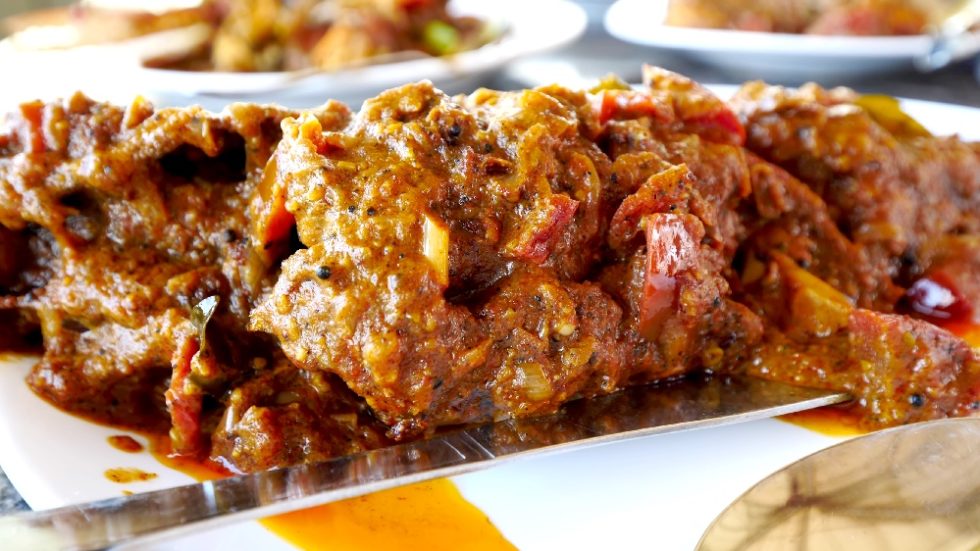 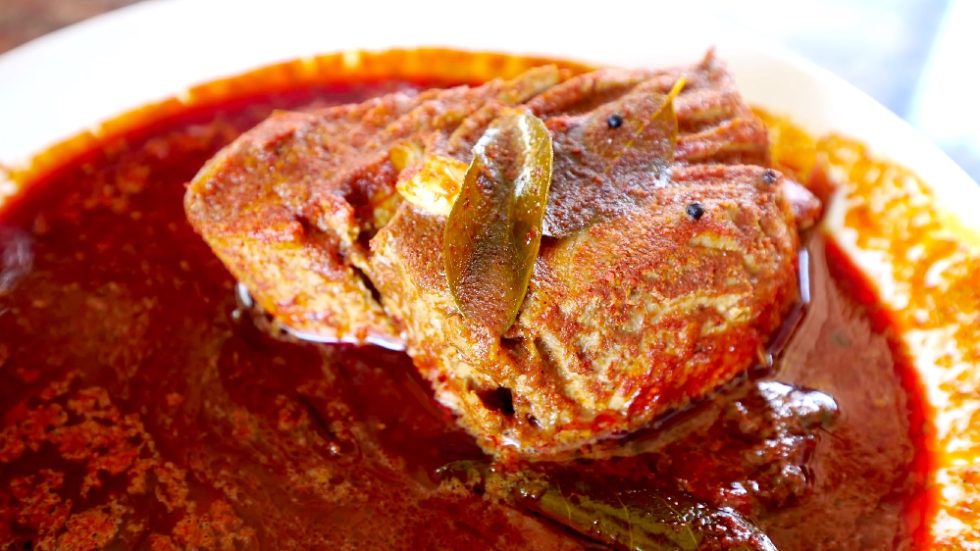 I hope you enjoyed coming with me to have spicy Indian food at a toddy shop in Alappuzha, India! If you did, please give this video a thumbs up and leave a comment below. Also, please subscribe to my YouTube channel and click the notification bell so you don’t miss any of my travel/food adventures around the world!