Day five in Kerala, India saw me briefly leave the town of Kumily to visit the neighboring state of Tamil Nadu, where I visited some beautiful, secret vineyards and tried some roadside snacks in Gudalur, India! Come along with me as my south Indian adventure continues!

My latest adventure started at the Woodnote Resort in the Thekkady area of Kerala, were my boy Ebbin and I hopped in a Jeep to make my way over to Tamil Nadu! I couldn’t wait to go there. I was already thinking about their dosas, which are some of the best on the planet. They’re crispier than the ones in Kerala and are so tasty! 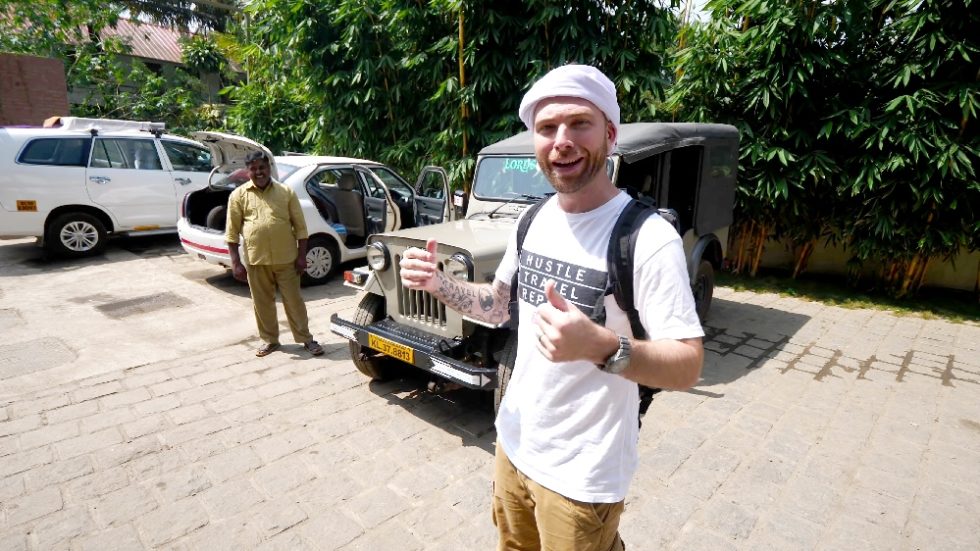 Our Jeep was basically a safari vehicle for off-roading in the jungle. We passed by a coffee plantation full of red coffee beans growing on the plants there. I hopped over the fence and tried a red bean. I didn’t love it, though, so I spit it out. From there, we headed to a market area, which we passed through to cross into Tamil Nadu. Along the way, we passed several pilgrims walking from Tamil Nadu to a temple in Kerala. 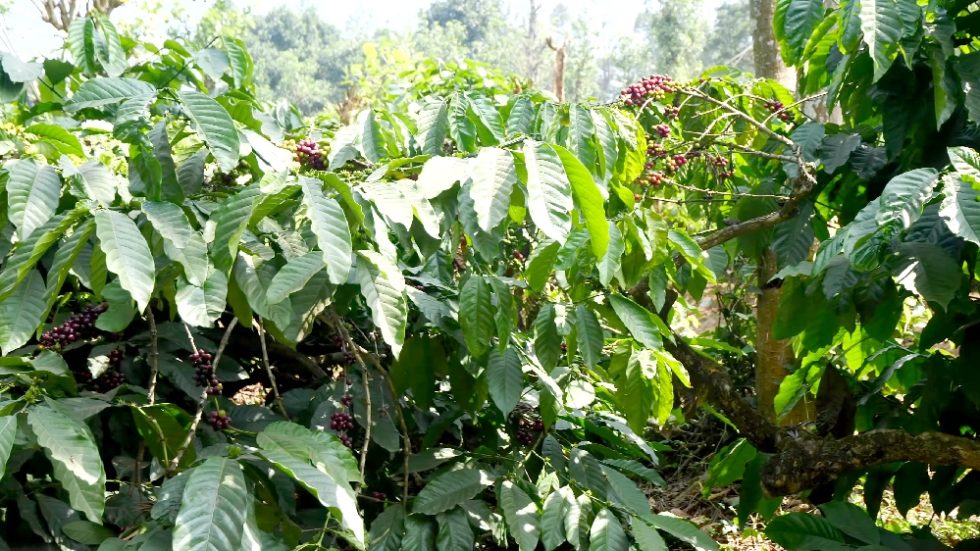 The biggest difference between exiting Thekkady vs. entering it was that, exiting it, it felt wilder. There was more forest and bush, whereas entering, we saw mostly tea plantations. We were also heading downhill because Tamil Nadu is a flatland, whereas Kerala has high mountains. I hadn’t seen a single monkey, but as soon as we entered the forests of Tamil Nadu, there were macaques everywhere along the roads! You’ll see a lot of them around the continent.

As we continued, I could see the plains of Tamil Nadu far below us. The two states are separated by a mountain range. The road was really winding and full of traffic, but this aggressive 4×4 handled the road really well. As we followed the road, we passed the Thooya Arockia Animai Church, which is the smallest church I’ve ever seen! Then, there’s more forest and monkeys. Then, we finally arrived in the flatlands of Tamil Nadu!

This area is mainly farmland. They have lots of green beans, cotton trees, palm trees, and banana trees. It’s also very dry, arid, and hot the moment you come down off the mountain. 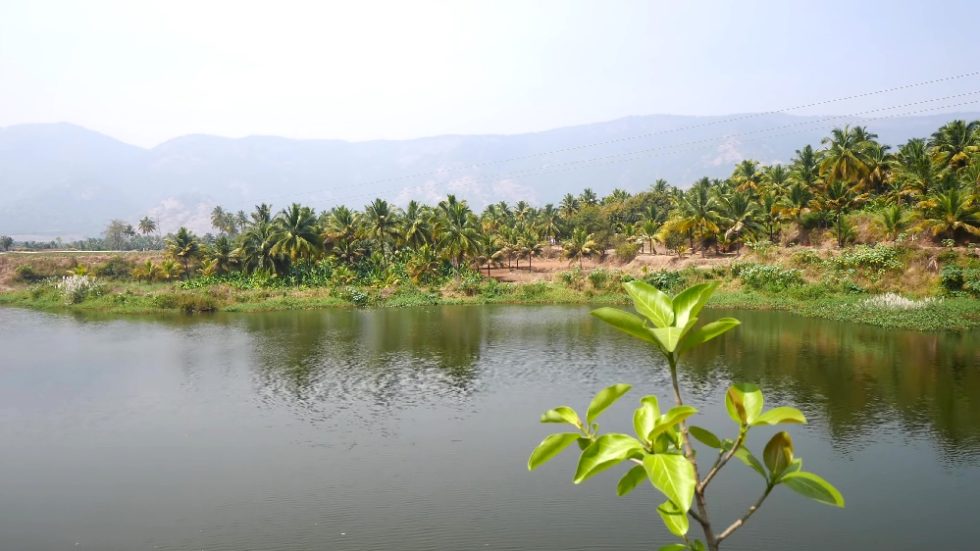 I had no idea there were vineyards in Tamil Nadu, but we came across one on our way to Gudalur. They don’t make wine, but they grow grapes. Their vines didn’t grow in rows like other vineyards I’d visited. These grew on top of wires and they go underneath to get the grapes. We also saw cotton plants, which had fruits growing on them. 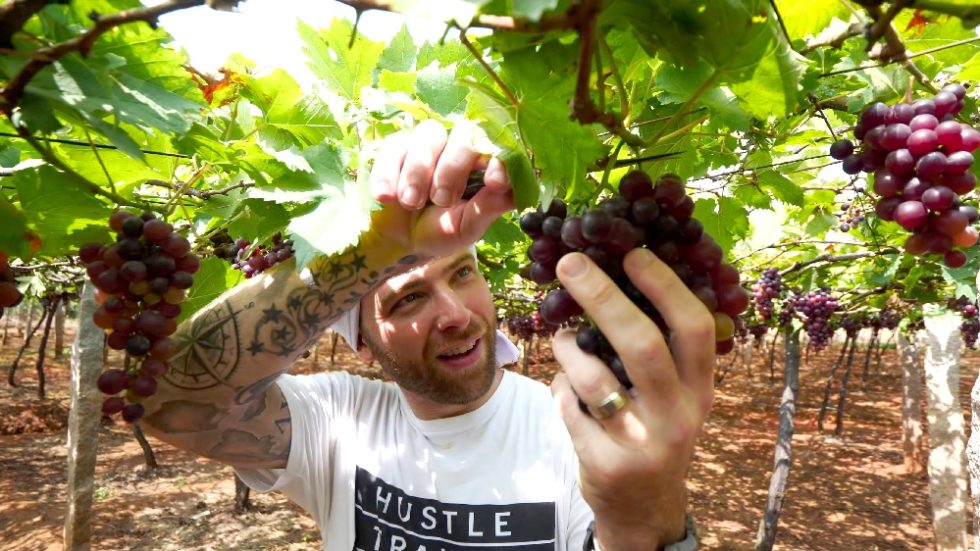 Inside the vineyard, I went underneath the wires and saw tons of big bunches of grapes hanging down. They looked so good! I pulled some off and we washed them off. Then, I tried some. They were so yummy and sweet. They were really refreshing in the heat! One kilogram of grapes only costs 50 rupees/$0.60 USD. You can get 5 kilos (11 pounds) for just $3 USD!

I cut some more grapes for my friends and then we went to get some non-alcoholic wine. It’s like a cross between juice and wine. We found a stand that sells some. It was grape juice with a bit of carbonation. It was super light and fruity. I saw that they also sold jungle honey, dried fruit with honey. There was also honey with nuts, which cost 140 rupees, or about $1.86 USD. I bought some because I love honey and I’d never seen honey with nuts before! 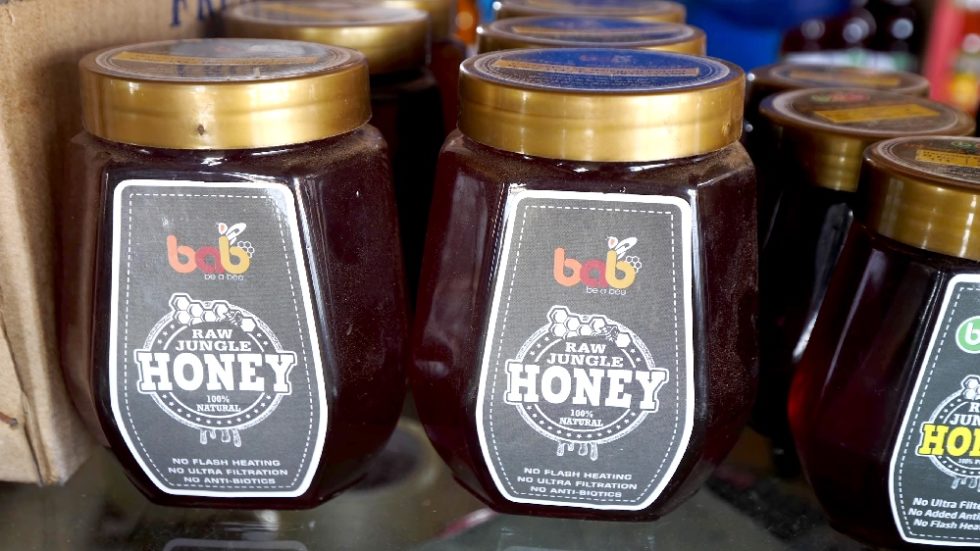 Before we headed back to Kerala, we hopped back in the Jeep and looked for a coconut vendor. We were looking for orange coconuts, which contain a really nice flesh and milk. We continued through the flatlands and found a stand selling them, along with some amazing-looking varieties of bananas. 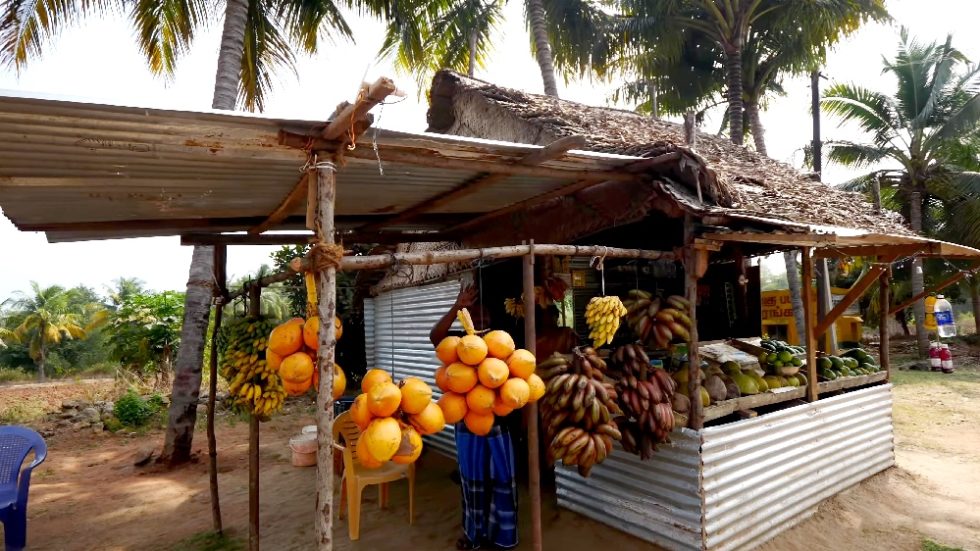 The vendor cut a coconut open for me and put a straw inside. There was so much coconut milk inside. The milk was refreshing and tasted different from the milk inside the green ones. Then, after I finished drinking, the vendor cut up the coconut so I could eat the meat inside. The coconut contained a lot of coconut water and very little meat, but it was super delicious and soft. It only cost me 40 rupees/$0.53 USD. 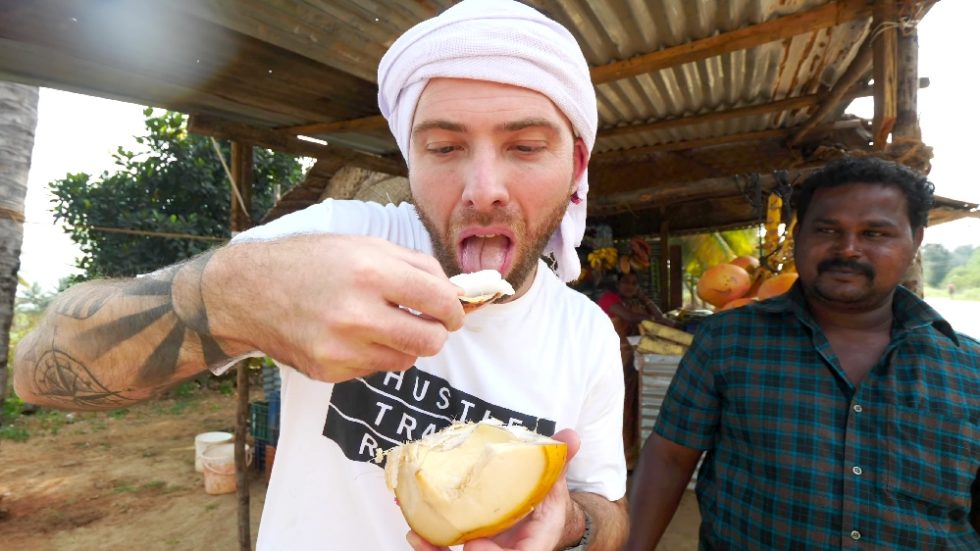 Then, I tried a red banana. It was super ripe and sweet. It had a slight plantain-like taste and was so good! They’re better than regular bananas. Then, I got some of the small yellow ones. They weren’t quite as ripe as I like, but it was still really nice! After finding the amazing vineyards in Tamil Nadu, these roadside snacks in Gudalur, India were the icing on the cake!

Check out the VIDEO: South Indian Cooking – How to Make Idiyappam & Dosas in Thekkady, Kerala, India

Then, we hopped back in the Jeep and headed back up the mountains. They looked so huge from the flatlands! Going up them was a lot faster and smoother. We passed through the checkpoint between the two states and arrived back in Kumily. From there, we set out to get some banana chips at Kairali Chips. Kerala is the most famous place to get banana chips in the world! They’re made of just bananas and coconut oil. 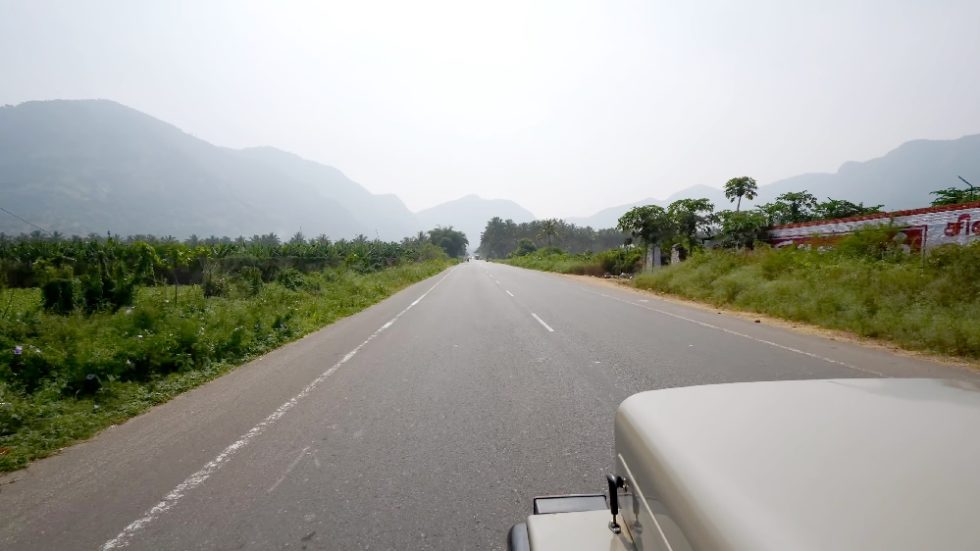 We watched a guy inside make them. He opens them, takes four in his hand, and shaves them into a pot of oil really quickly. It takes 15 minutes for them to fry up perfectly. Besides regular banana chips, they also have banana chips with pepper; banana chips with masala; jackfruit chips; sweet banana chips with jaggery, sugar, cumin, ginger, and cardamom; and more. 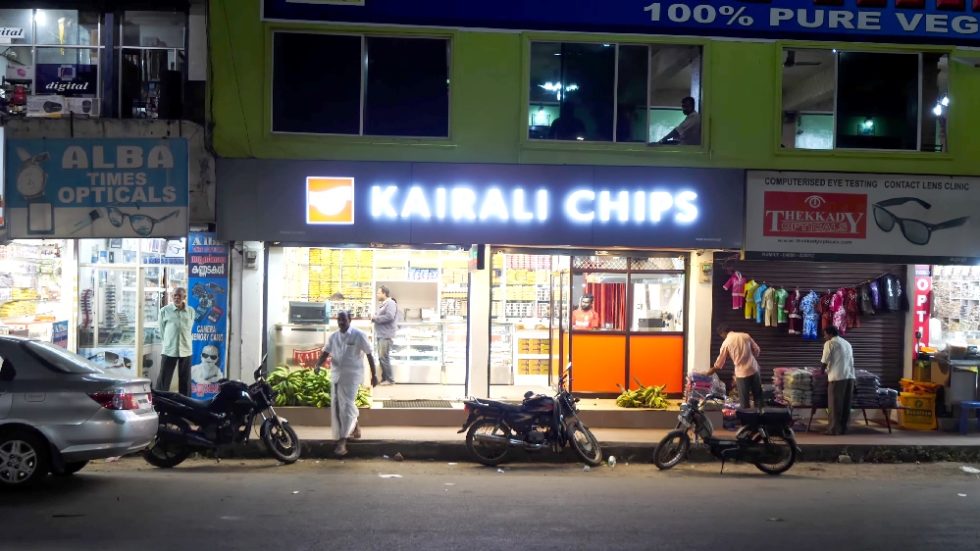 I could also see homemade chocolates including mango chocolate and coconut chocolate, as well as peanuts, honey with dried fruits, and more. They all looked really good! I tried the almond chocolate, which was almost like chocolate fudge. It melted right in my mouth! It was even better than Swiss chocolate! 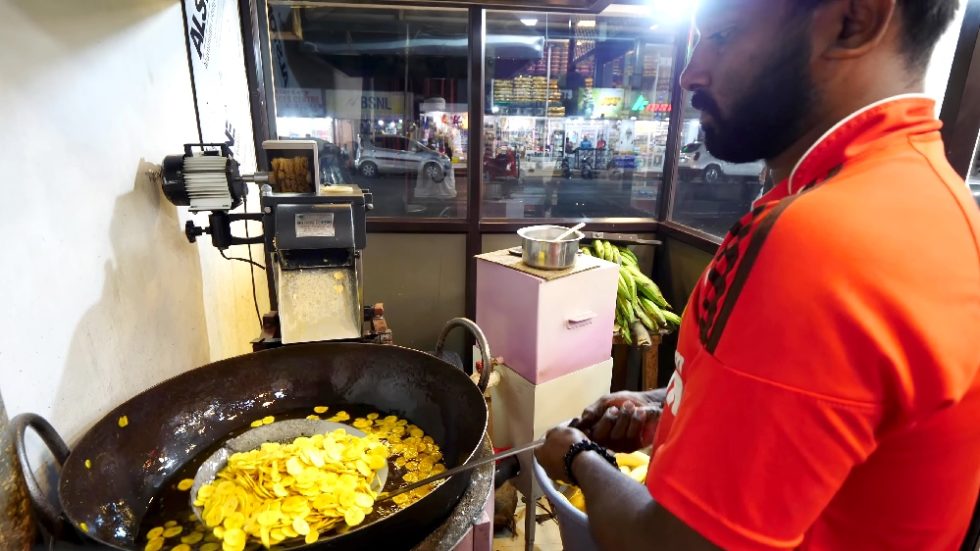 I got a sampler of banana chips and tried them. They were salty and so fresh, and I couldn’t taste any oil at all. They were super dense and tasty. I wanted to try the masala ones, too!

From there, we headed across the street to Southern Crafts Handicrafts & Jewellery, where I could see lots of craft goods. They had some really amazing elephant statues, but I was looking for a mask. I found a really beautiful and colorful cow mask that we negotiated down from 3600 rupees/$47.72 USD to 3000 rupees/$39.77 USD. He wrapped it in paper for me. I love collecting masks from the places I visit, and now I had something that would remind me of Thekkady forever! 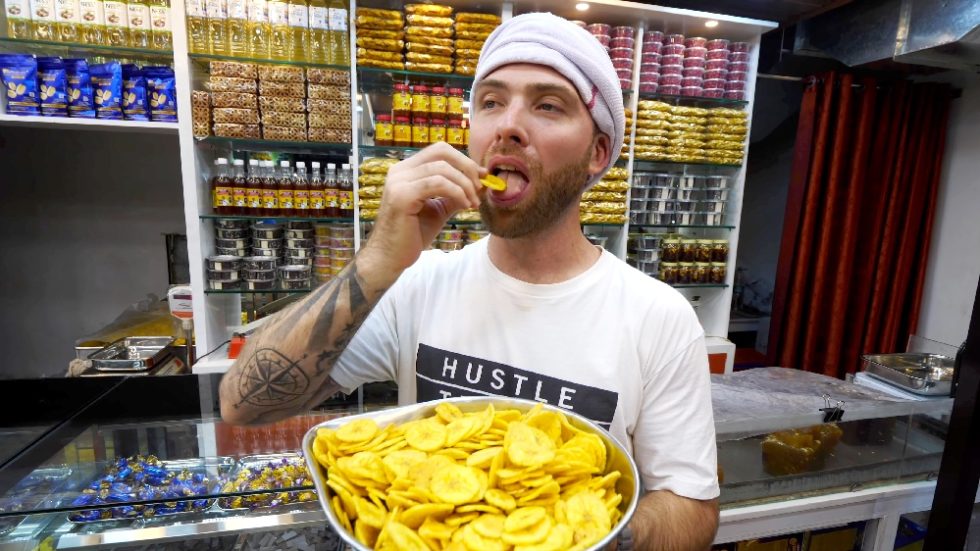 There were also some massive elephant masks, but they were just way too big, but I absolutely loved them! 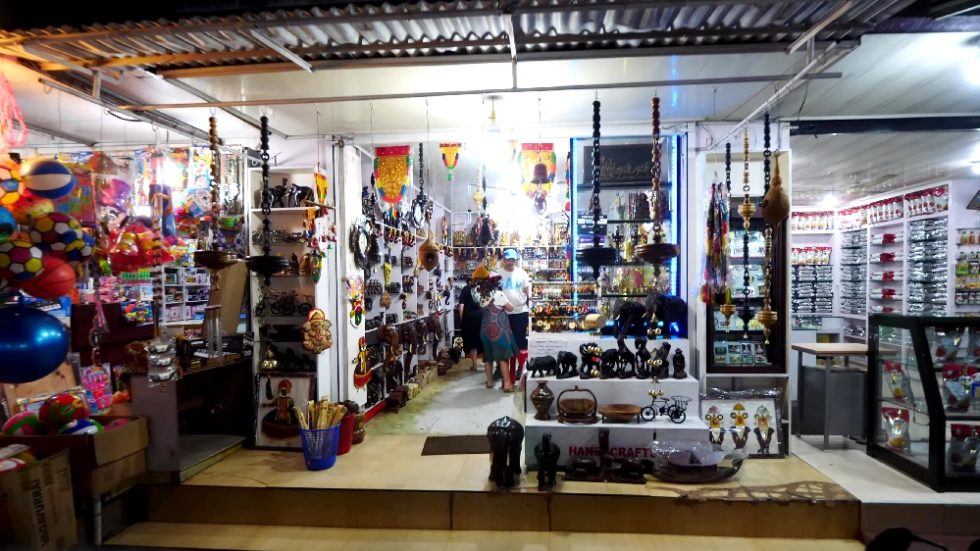 What an amazing afternoon and evening visiting India’s secret vineyards in Tamil Nadu and having roadside snacks in Gudalur, India! I had so much fun! Huge thanks to my boy Ebbin for coming with me on this adventure. Be sure to follow him on Instagram and subscribe to his travel/food YouTube channel! I also have to thank my friends at the Woodnote Resort for helping me have such a memorable experience in Thekkady. They’re the best hotel in the area and will show you a great time! 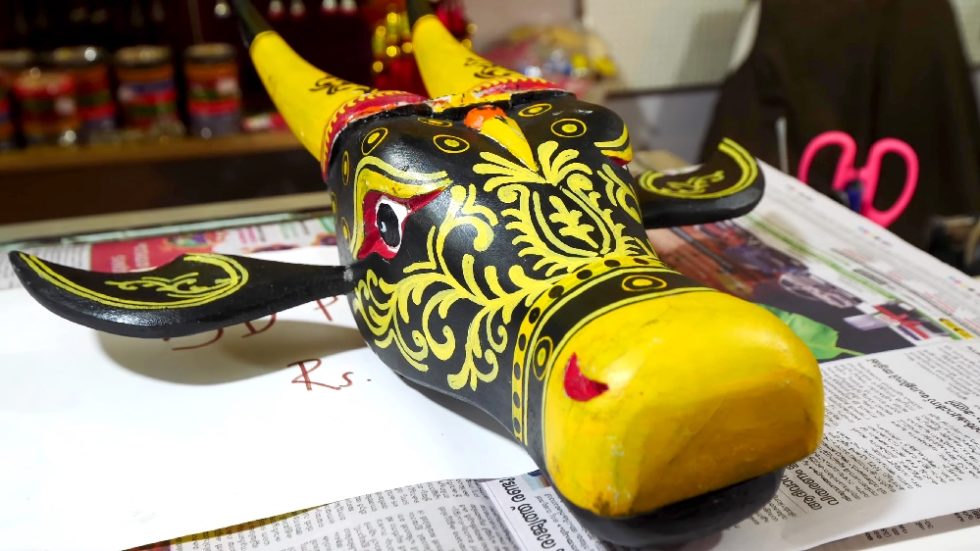 I hope you liked coming with me on my journey to India’s secret vineyards in Tamil Nadu and having roadside snacks in Gudalur, India! If you did, please give this video a thumbs up and leave a comment below. Also, please subscribe to my YouTube channel and click the notification bell so you don’t miss any of my travel/food adventures around the world!