On my fifth day in Kerala, India, I did something really special that I will never forget. I had the rare opportunity to head into the mountains in Thekkady, meet a local tribe that lives in the mountain forests there, and cook and eat an amazing tribal meal with them! Come along with me as I cook and eat authentic tribal food with an isolated mountain tribe in Pandikuzhi, India!

My afternoon started in the mountains of Thekkady, Kerala, India, overlooking the plains of the neighboring state of Tamil Nadu. I couldn’t wait to meet with the Mannan tribe and join them in making (and later, eating) a traditional tribal lunch! I’d never done anything like this before! 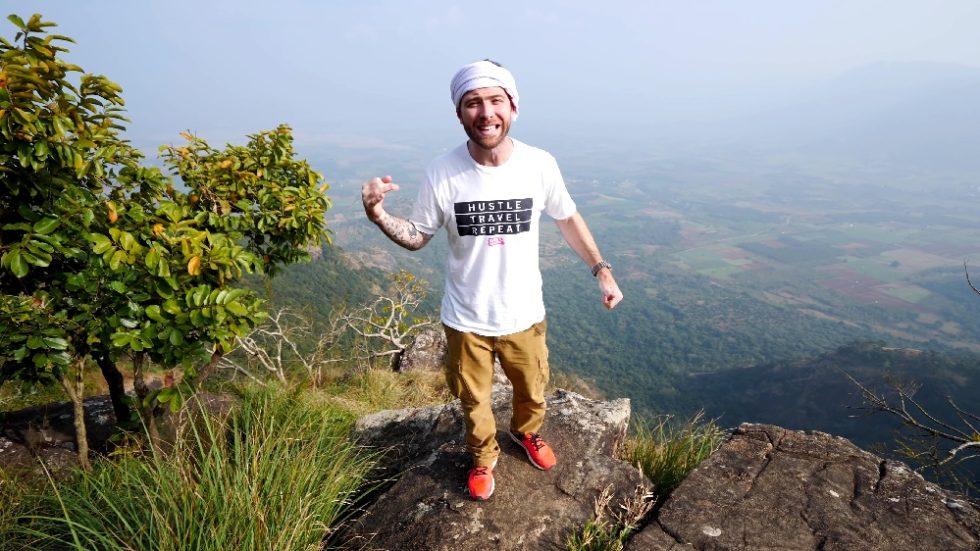 I was with my boy Ebbin and my new friend Dennis from the Woodnote Thekkady Resort. We had to climb up to the tribe through a rugged and rocky environment. We met up with them. The tribespeople already had a fire going and lots of pots and pans ready. They started by peeling shallots. They also had chilies, tomatoes, big onions, and fish from Thekkady Lake ready to be cooked, as well as chicken and two types of tapioca. Tapioca is a large root vegetable that’s very similar to a yam or cassava. 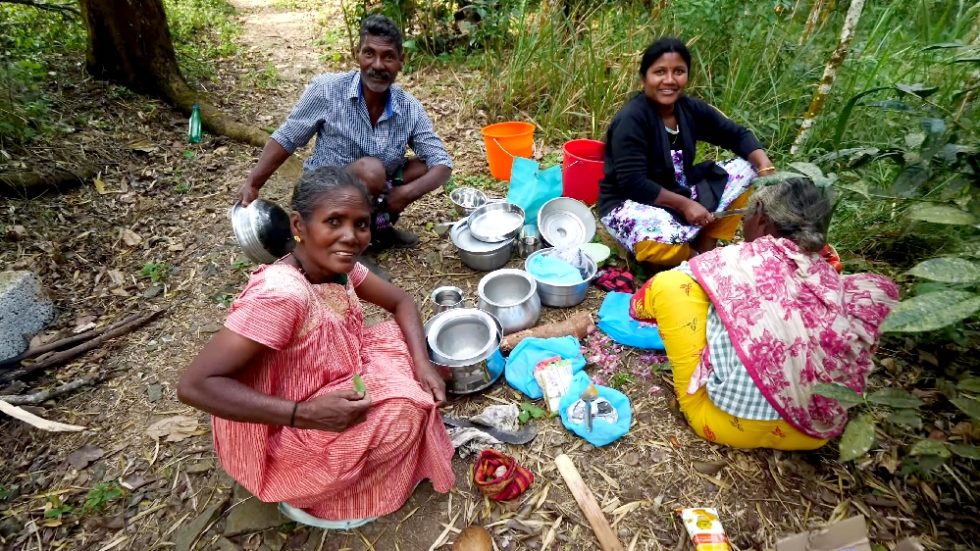 They were also cooking some spinach. I watched as they washed, spiced and prepared the fish, chicken, and vegetables. They cooked the fish right on the burning fire in the ground. I learned that the tribespeople were speaking a dialect that is a mix of Malayalam, Kannada, and Tamil. They’ve been speaking it for centuries because they’ve been out in the forests and mountains forever.

Then, they added a mix of tomato, ginger, garlic, jeera, and pepper to a pot of water over a fire. They took the fish off the fire and began peeling the tapioca. While we watched, I tried some of the fish. It contained some spines, so I had to be careful. The turmeric and salt, mixed with the charcoal flavor, were amazing! It was crispy and really nice! 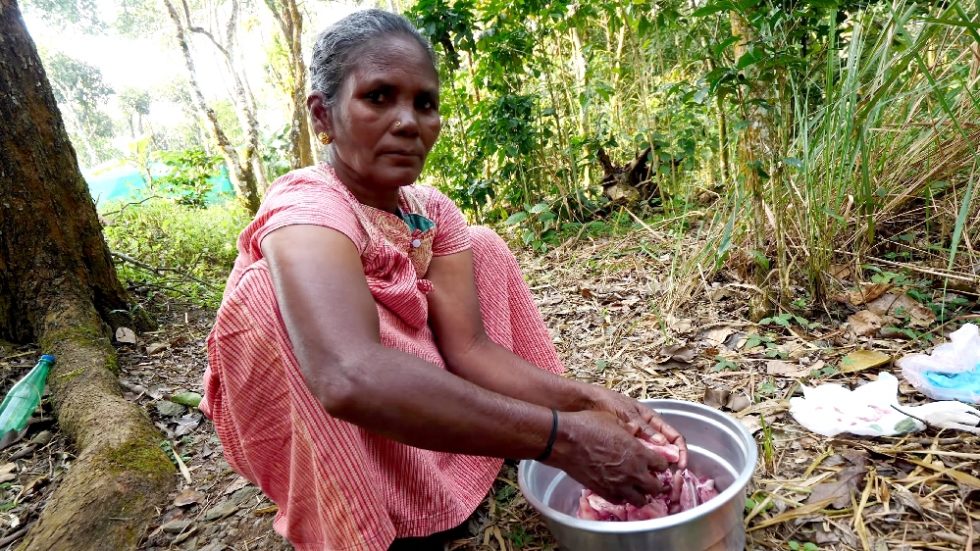 The tribespeople we were with was a family. They were a mother, daughter, aunt, and brother. I helped cut open a package of ragi and watched as they washed the cassava. Meanwhile, the tomato, ginger, garlic, jeera, and pepper mix was forming a gravy. They added ragi and curry leaves to it. Then, they put a halved, unpeeled raw tapioca directly into the fire. 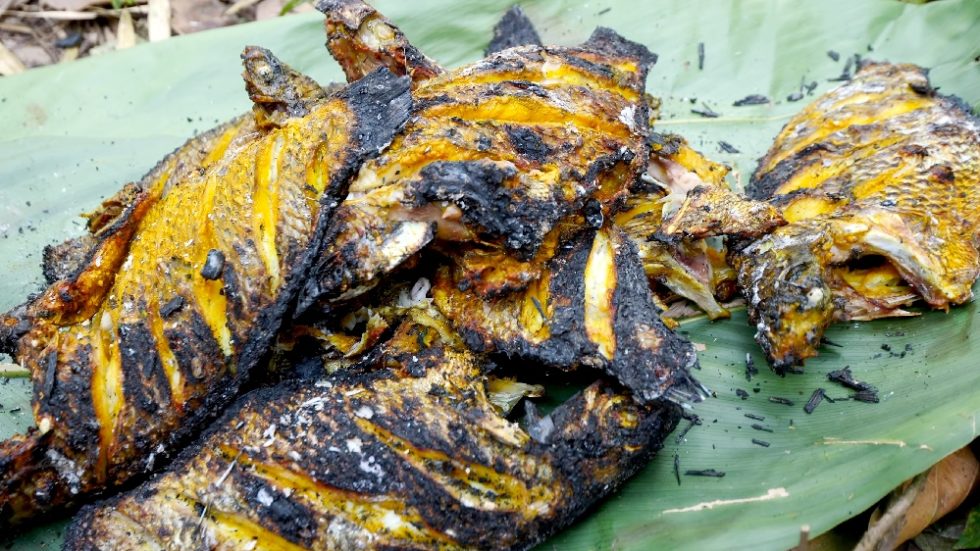 The daughter, Devon, was working on the chicken, which she added onions, ginger, chilies, and tomatoes to. They cut them into small pieces. This type of cooking is unique because they use no oil. Everything they use is locally sourced from the forest. 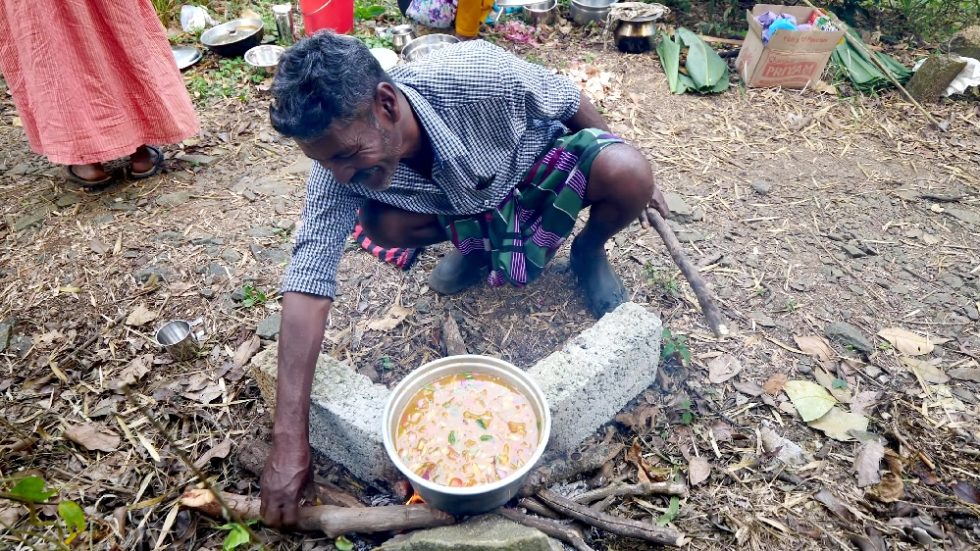 I was super excited about this curry. I couldn’t wait for her to add the chilies. She added the vegetables to the pot first and added the chicken on top. Then, she mixed in coriander powder, chili powder, ginger and garlic paste, strong wild pepper straight from the jungle, and salt. She mixed it well with her hand and they added some water. 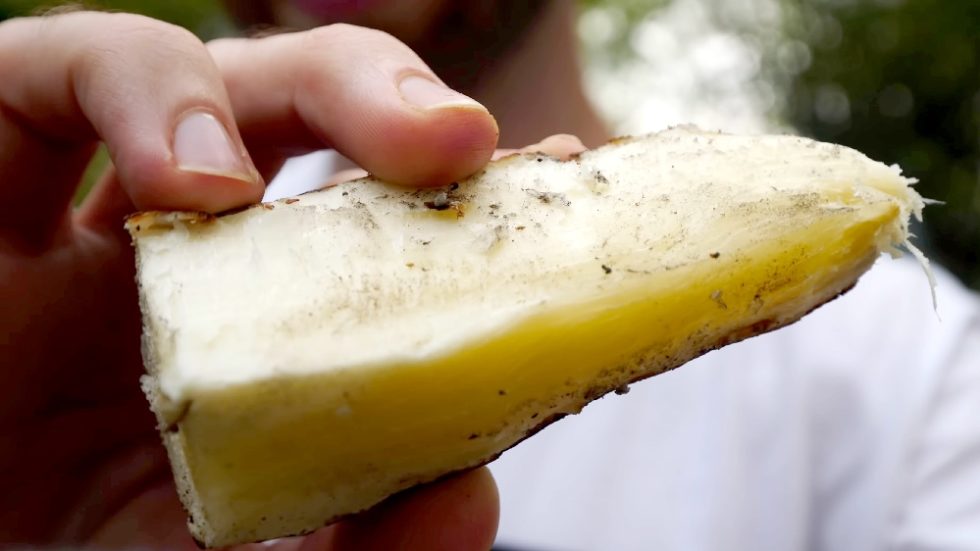 Meanwhile, they took the charred cassava halves off the fire, boiled the pot of chopped cassava, and put the chicken curry over the fire. After a while, the tapioca and fish were both ready, but we were still waiting for the chicken curry. It would take about 20 minutes and then we’d eat!

Check out my VIDEO: South Indian Cooking – How to Make Idiyappam & Dosas in Thekkady, Kerala, India

The brother scraped the burned parts off the tapioca from the fire. It took a while, but this is what gives it a delicious, roasted flavor. They let me try some of the roasted tapioca beforehand. It was nice and wasn’t as hard as it usually is. It was still a bit tough, but I could tell it would go well with the chicken curry. 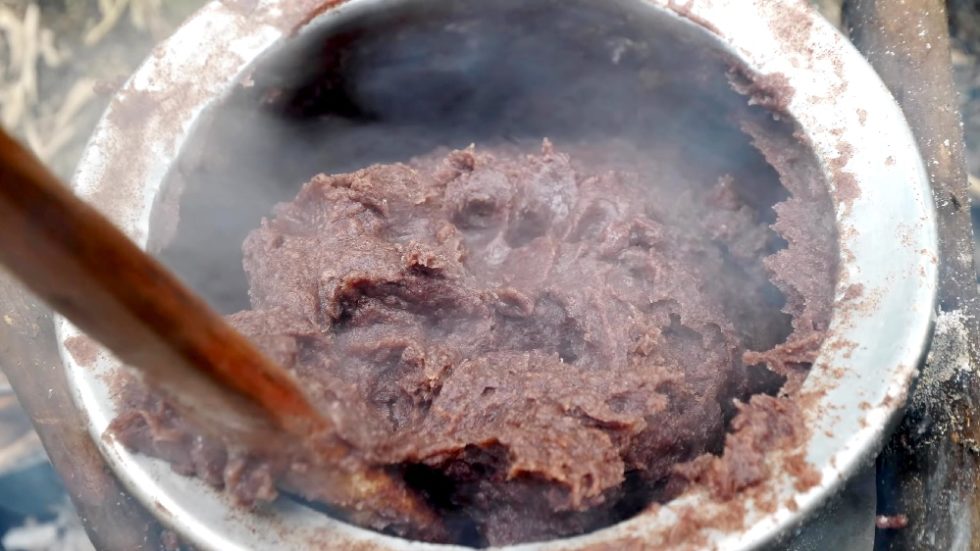 Then, they took the chicken curry off the fire and started working on the ragi dish. They took added the ragi powder to a pot of boiling water and mixed it up until it formed a hot paste. After a while, it was my turn to stir it with a long, wooden spoon while the daughter added water to it. She said I did good! 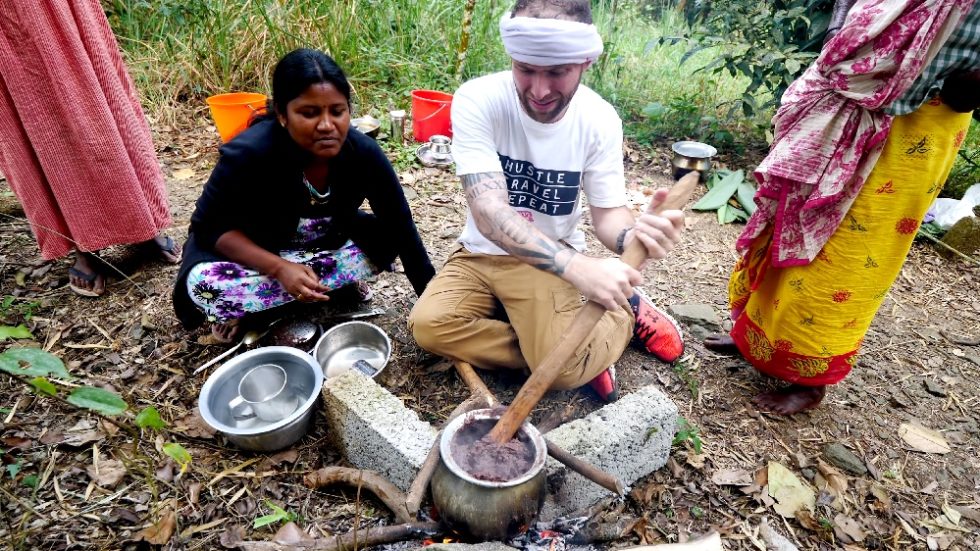 They spooned the ragi onto large bay leaves, which they folded up into a package. The mother made six in total. Then, it was time to eat. I was so excited! They served me some ragi, spinach, cassava, chicken, and fish, and finally, some of the chicken curry. It looked phenomenal and so healthy. 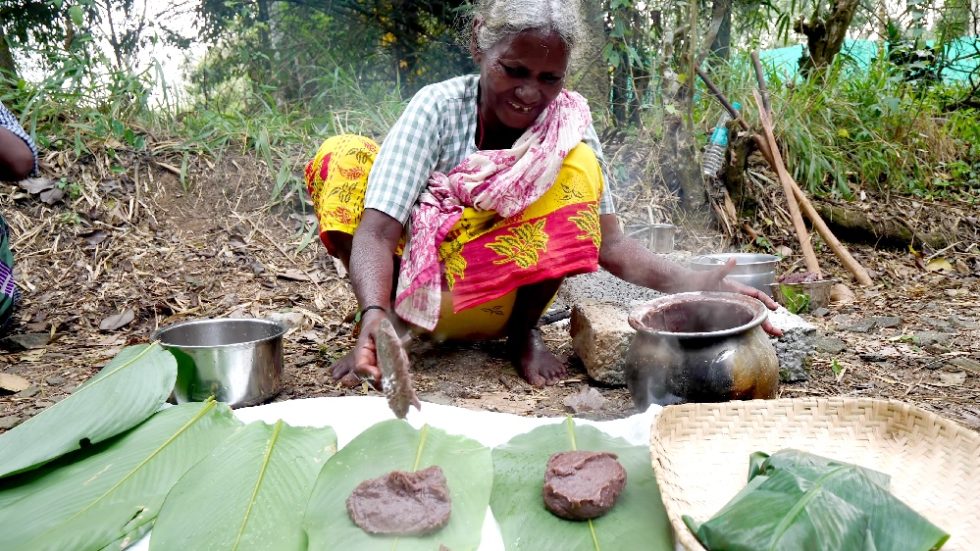 I went for the ragi with the curry first, which was almost like a thick potato mash. The chicken was super hot but not too spicy. Then, I went for some of the spinach, which was super fresh and mixed with onions. Then, I mixed the spinach, ragi, and curry. I loved it. It had a ton of flavor even though they didn’t use many spices. The tribal food that the Mannan tribe put together is one of the most unique meals I’ve had in India, but it was also amazing!

The ragi was really filling. Then, I dug into the tapioca. It was really earthy. Then, I tried the fish, which was full of barbecue taste. Everything was light except the ragi. I got rid of some fish spines and got more of the flesh. I loved the spinach, and the ragi sticks to your fingers! 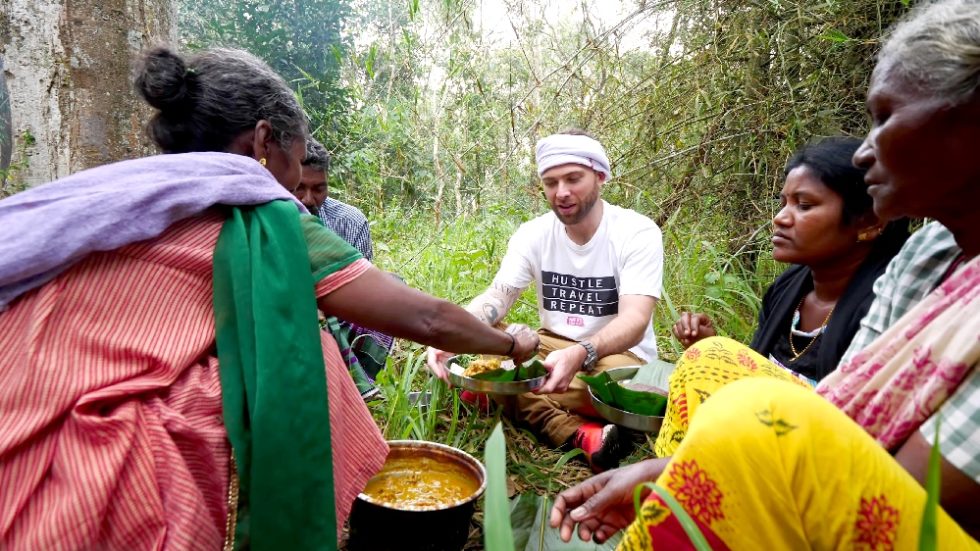 This was the least spicy meal I’d had in Kerala. I couldn’t really taste the chilies, but I knew they were in there. The fish was outstanding. I also learned that you’re not supposed to chew the ragi – you swallow it whole. So you should only eat a small amount at a time. It doesn’t stick to your mouth that way! 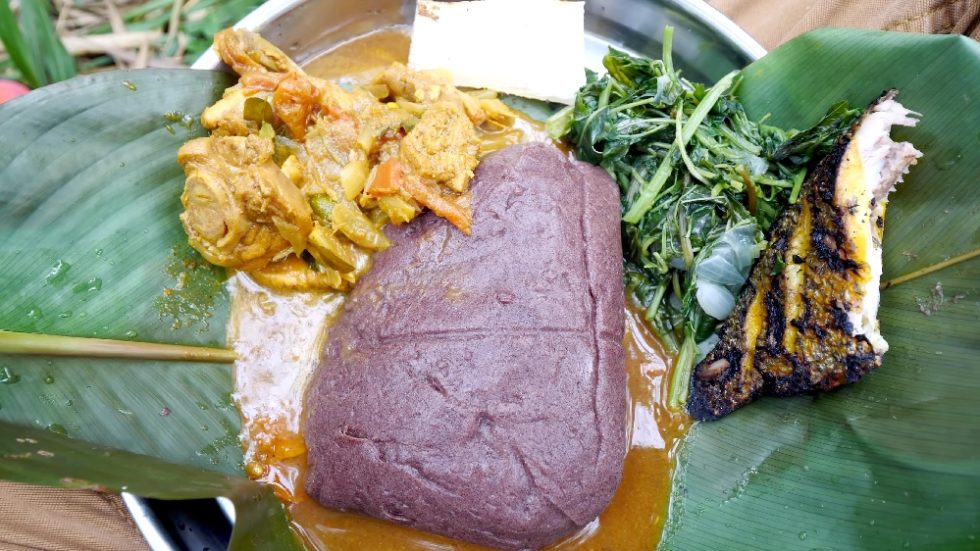 Once you’re done, you clean your hands with water and rinse your plate. This tribal food experience with the Mannan tribe was one of my favorites I’ve ever had in India! 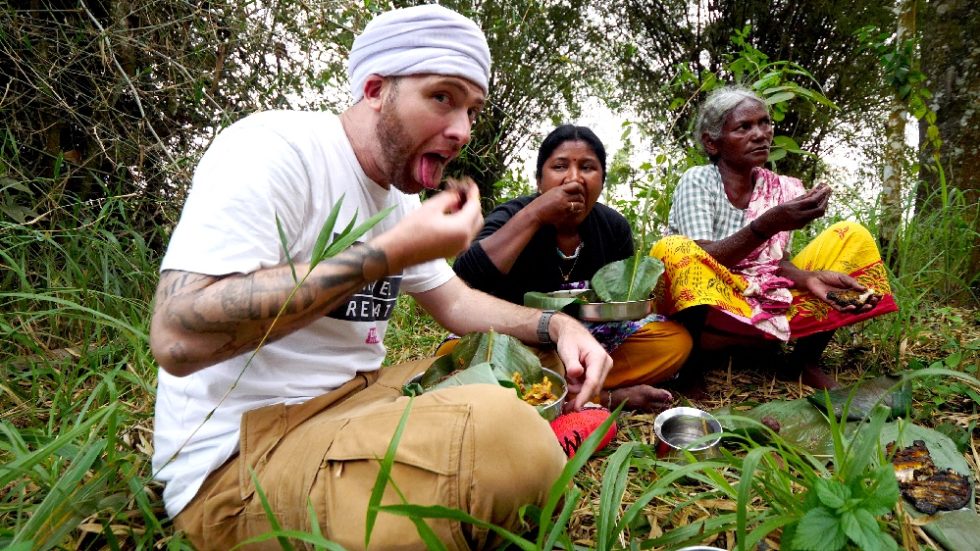 You have to have this tribal food experience with a mountain tribe when you come to Thekkady, India. It takes two hours and is one of the most authentic experiences you’ll have. The food is healthy, super tasty, and unique. It’s lean and not spicy at all. I have to thank Ebbin and Dennis for bringing me out here! Subscribe to Ebbin on YouTube and follow the Woodnote Resort on Instagram! To learn more about the Woodnote Resort, check out their website. They’re the best hotel in Thekkady! 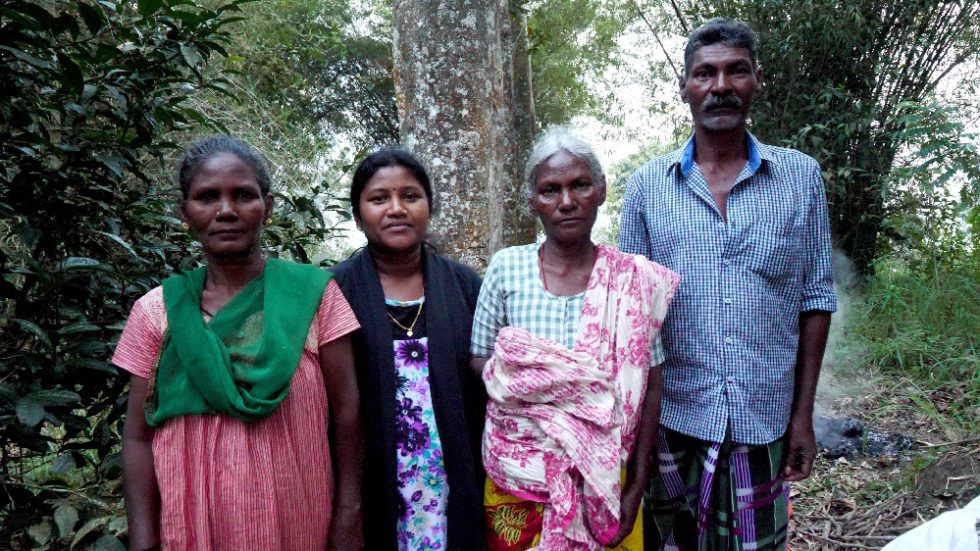 I hope you liked coming with me to cook and eat authentic tribal food with the Mannan tribe in Kerala, India! If you did, please give this video a thumbs up and leave me a comment below. Also, please subscribe to my YouTube channel so you don’t miss any of my travel/food adventures!