The morning of my tenth day in Kerala, India was another one for the books, as I got to do something really special: I got to attend an Indian wedding! Come along with me as I experience Indian wedding food prep for 1,500 people in Kasaragod, Kerala, India!

My boy Ebbin drove me to the city of Kasaragod in northern Kerala, where we’d attend the Indian Christian wedding of Nibin and Tanya. After the bride and groom get married, there would be a huge reception for 1,500 people. 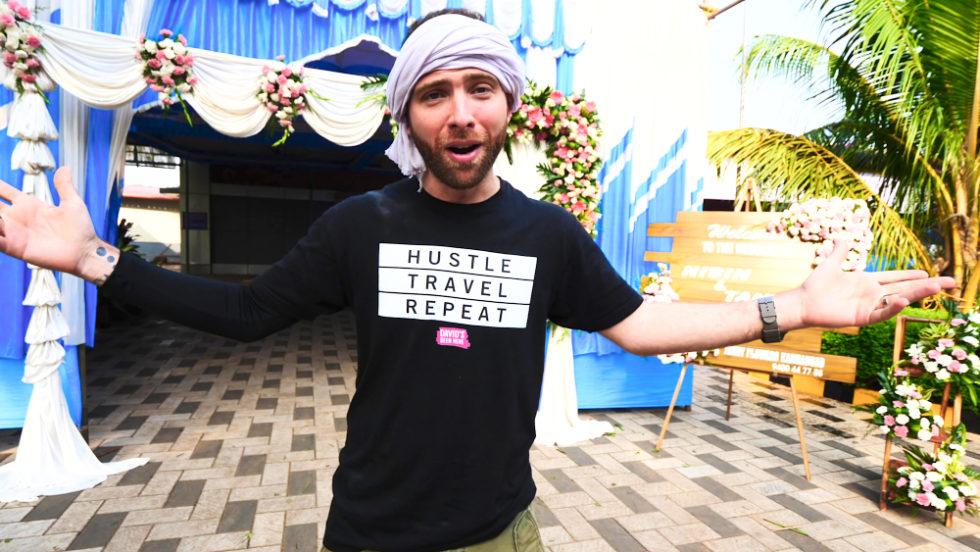 I was so excited, as this was my first Indian wedding, and I couldn’t wait to try the food here in Kasaragod, Kerala, India. I headed into the kitchen to watch them prepare this massive feast. I was so excited! They were cooking up so much food. I could see onions, papayas, duck roast masala, and more. I got to stir the duck roast masala, which was in a huge vat and had an aroma that hit me hard! I could smell the chilies and lots of spices. It smelled amazing! 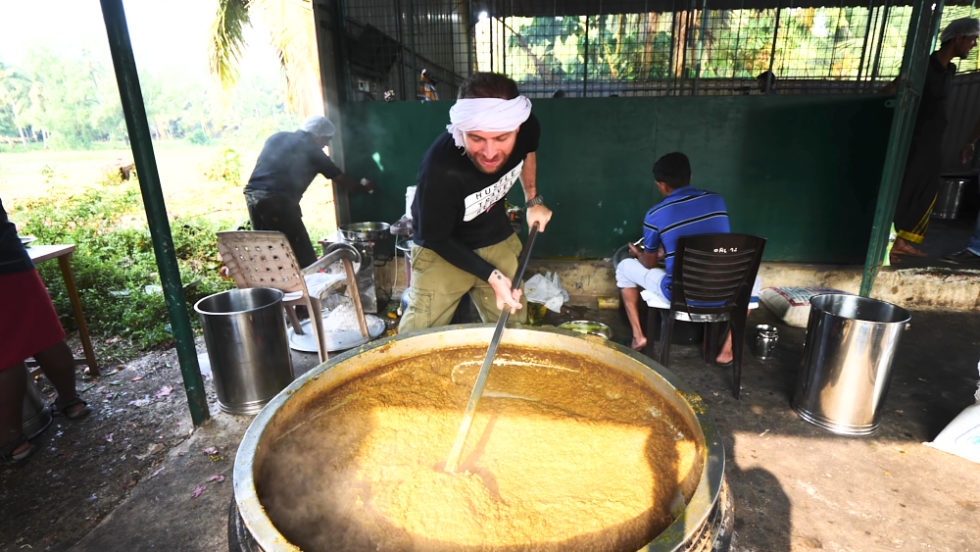 They were also making Kuttanadan duck curry. After they boil the duck pieces, they mix it into the pre-cooked masala. I got a chance to stir and mix the duck curry, which was also in a massive vat. It looked like the meat from about 50 ducks was inside! The yellowish color looked amazing, but I couldn’t stir for too long because it hurt!

I watched as they stirred and prepared more dishes, including a pot of biryani! This biryani was different from Calicut biryani and Thelassery biryani. The chicken and masala are kept separate, and the rice is kept separate. They mix them on the plate. They were also making beef roast, which slow cooks for 3 hours until the curry dries out. 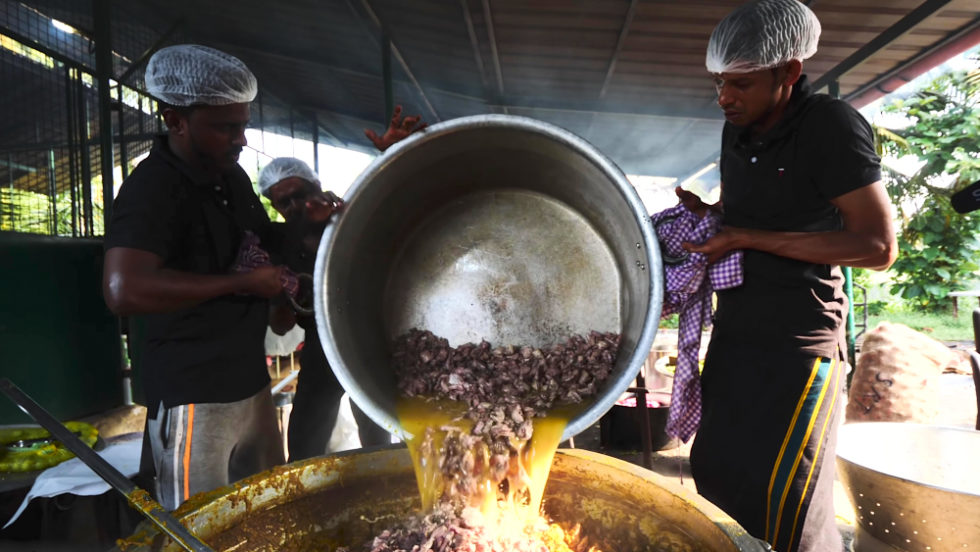 It was hard to be in the kitchen with all the smoke. The spices in the beef roast hit me hard! Back outside, I saw a gentleman making rice dough. He put 3 platefuls of rice into a machine that grinds it into dough. There was also a man grating fresh coconut. The coconut was really good! They also gave me a glass of freshly-squeezed lime juice, which was so refreshing! 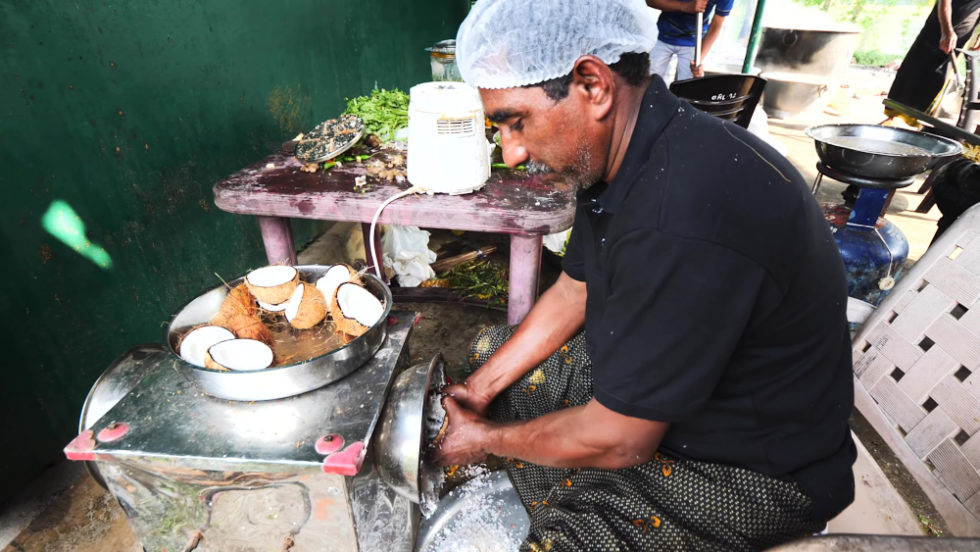 So much work was going into feeding 1,500 people. Between the rice, duck roast, coconut, chilies, rice dough, lemons, and limes, it was incredible. The guys kept making more and more rice for the biryani. There was a huge pot that was basically like a big, rice soup that would break down into biryani. I also saw a big pot of a rich and spicy-looking fish curry! 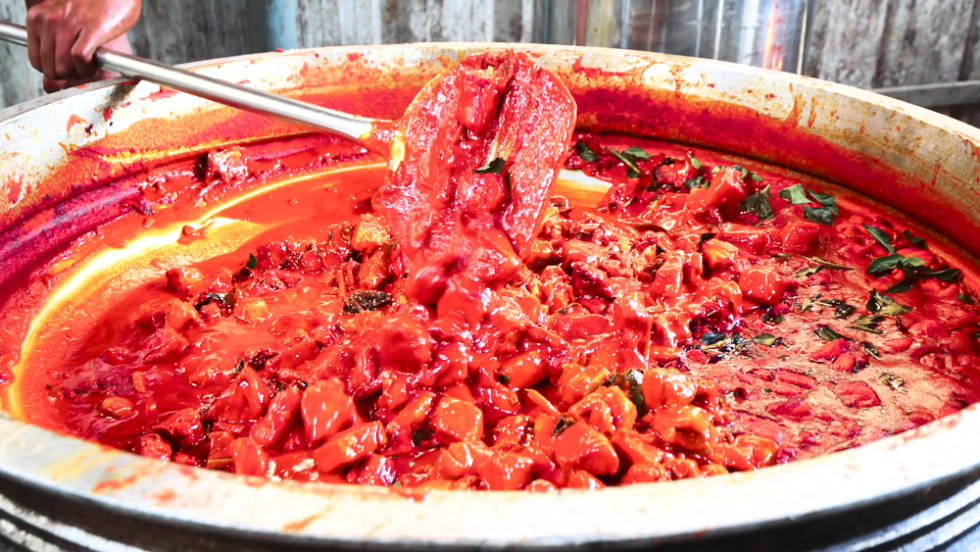 I watched them make even more biryani. They put a big rock and burning charcoal on top of the lid to create vapor inside the pot. Once it’s sealed, the biryani sits for 90 minutes. Then, they build the chicken masala. It looked so yummy!

I watched as others cut bananas and limes, and then they added coconut milk to the Kuttanadan duck curry. Then, they opened the first pot of biryani. It contained coriander, cashews, raisins, crispy onions, and more. The aroma was heavenly! 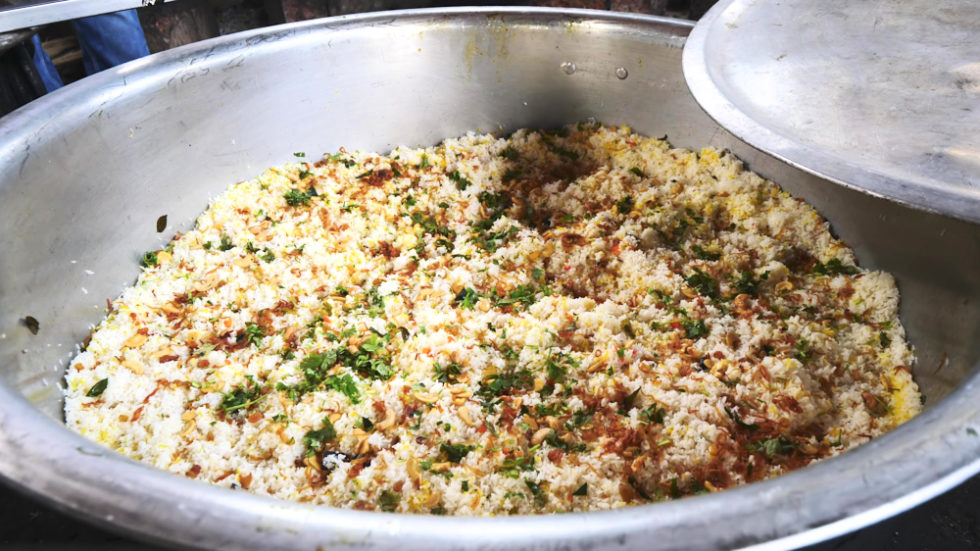 The beef roast was almost finished. I tried a piece. It was spicy and nearly evaporated in my mouth. It needed something with it, like rice or appam, but it was incredible! Then, I tried a small piece of chicken for the biryani. It was a nice, spicy fried chicken that was slightly sweet! It was so good! There was also some chicken 65! 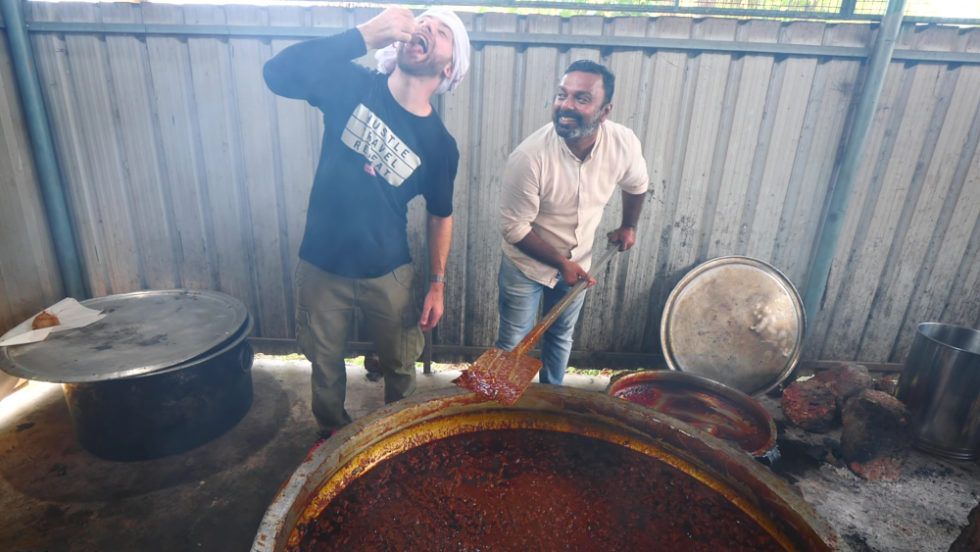 We walked over to the reception area where we saw them making puri, appam, and more. After they made the appam, the cook would just toss them onto the table! They kept making them and wouldn’t stop until they’d made at least 1,000 of them. 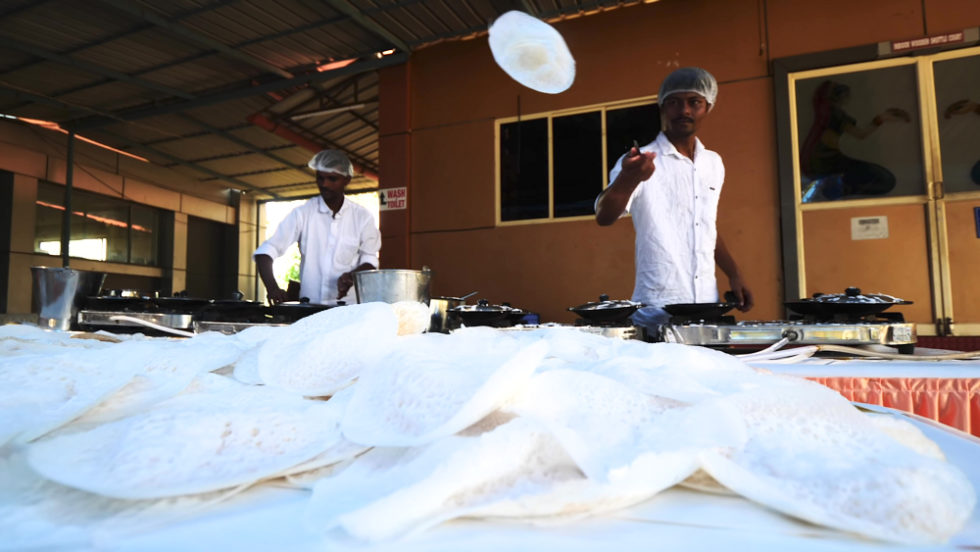 They were also making a puri-like flatbread called ney pathal that’s popular in Kannur. They flatten the dough and fry it, and it puffs up. It tasted really good and was very similar to a puri except it was made with rice flour. I love them because you can scoop up everything with them! They’re crispy on the outside and doughy on the inside. Ebbin said they’re good with mutton! 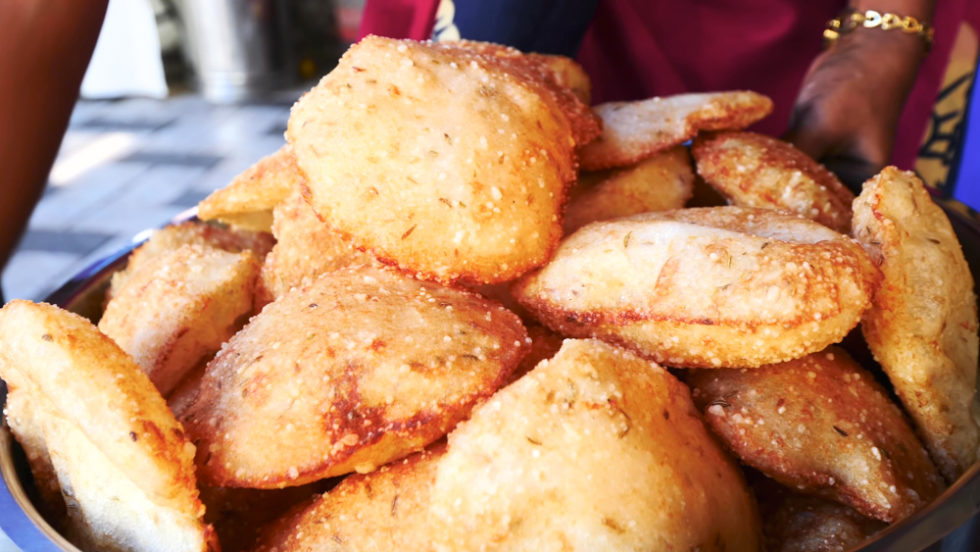 Guests entering the reception are greeted with shakes, including watermelon, kiwi, and pineapple. The watermelon was pure with a bit of sugar. I tried another minty one with lots of sugar, and a musk melon one that was almost like a banana daiquiri due to the thickness. The pineapple-mint was a really great combination!

With 1,500 guests, the reception was buffet-style. They had appam, ney pathal, Kuttanandan duck curry, Varutharacha beef curry, chicken biryani, and more. I watched them bring the huge pots of chicken and biryani to the back. They serve them in separate plates. I couldn’t wait to eat! 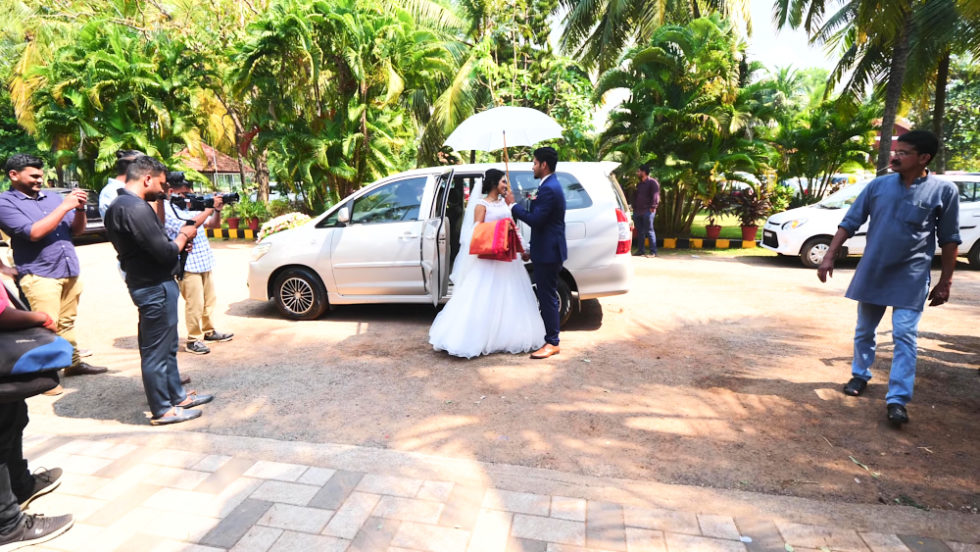 We waited for the bride and groom to arrive. I got a chance to greet them, and then it was time to eat our Indian wedding food in Kerala, India! There were a lot of people standing and eating, while others were sitting. There was also a guy pouring mint lemon tea about a meter high! The tea was super minty. Then, we met Jomish, the man who invited us! 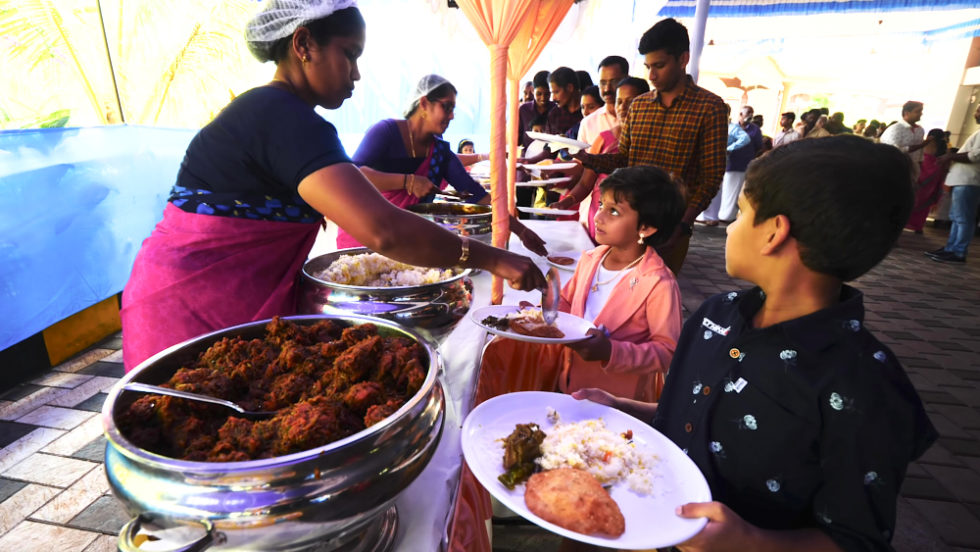 Finally, we took our seats. I started with the chicken 65, which is fried chicken covered in masala. It was nice and juicy but wasn’t spicy and the masala was nice. Then, I tried some bitter gourd, which was nice but a little dry. 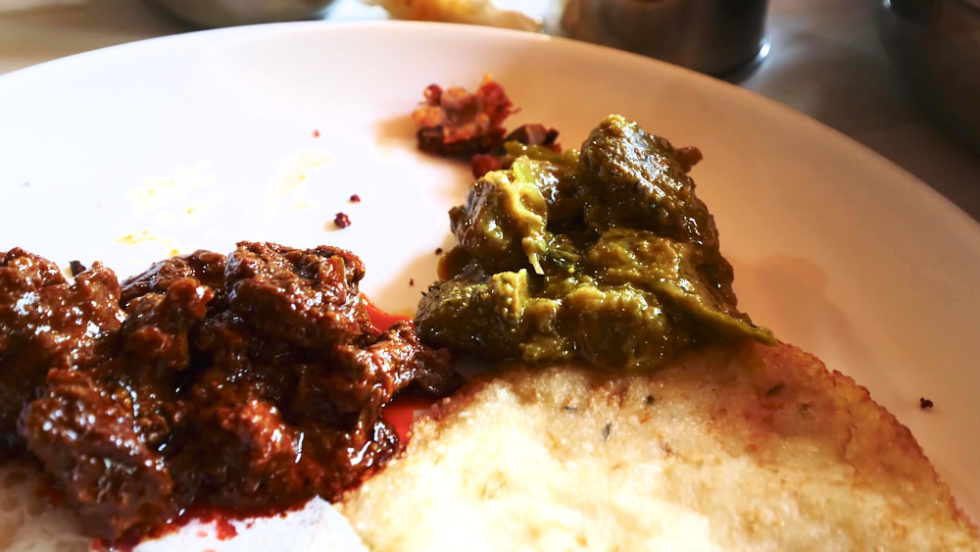 I got more beef curry and had it with the ney pathal. Then, they served me the chicken biryani, which was a mountain of rice with chicken on top. I broke off a piece of chicken and mixed it with enough rice to absorb the masala. It was nice and creamy and I loved the short-grain rice. The light fry on the chicken was excellent. It was like having the chicken 65 with rice. It was so tasty! 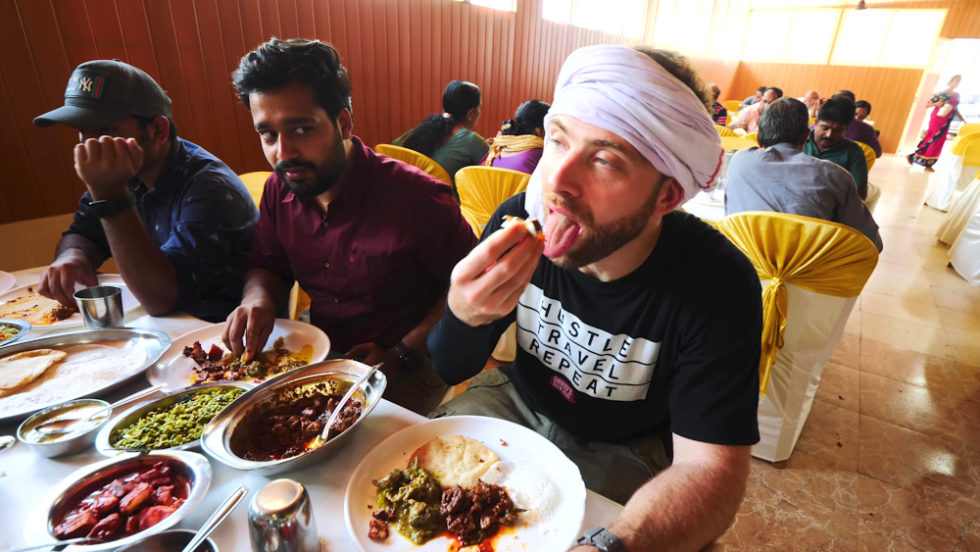 This biryani was right up there with Calicut and Thalassery biryani in terms of quality. Then, I added some of the spicy fish curry to my biryani. It was creamy and stellar! Lastly, we had dessert: kheer halwa and ice cream with fruits. Together, they were amazing. 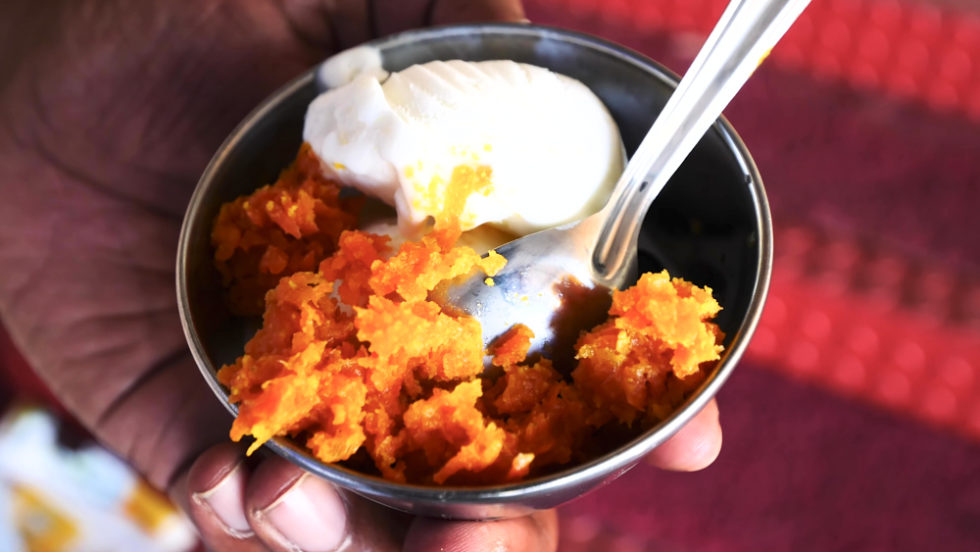 The blueberries, pineapple, and kheer halwa together were really nice. The halwa was similar to carrot cake, but a little different. The best thing to do is get some vanilla ice cream and fruit from the bottom. It was the perfect dessert for this weather! 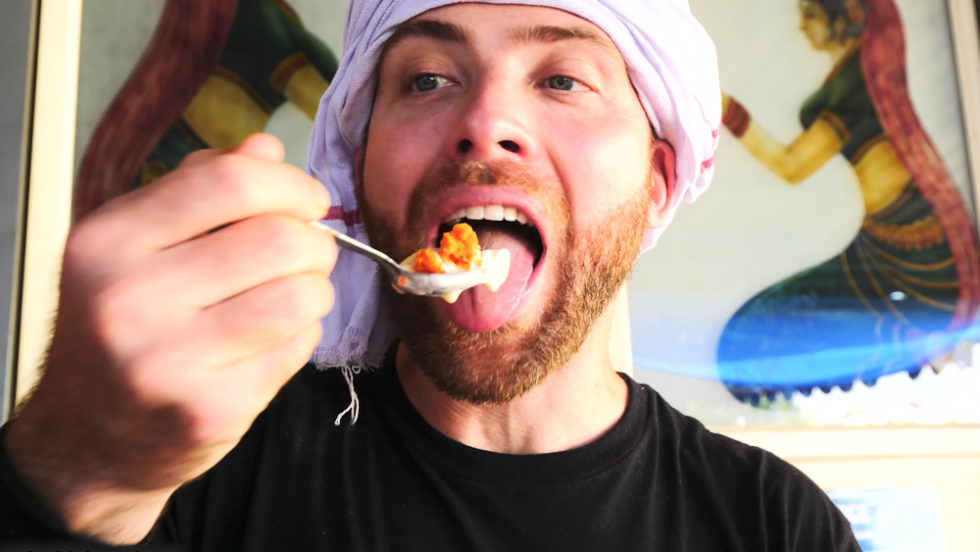 What an amazing Indian wedding food experience in Kerala, India! It may have been my first but I knew it would be far from my last! 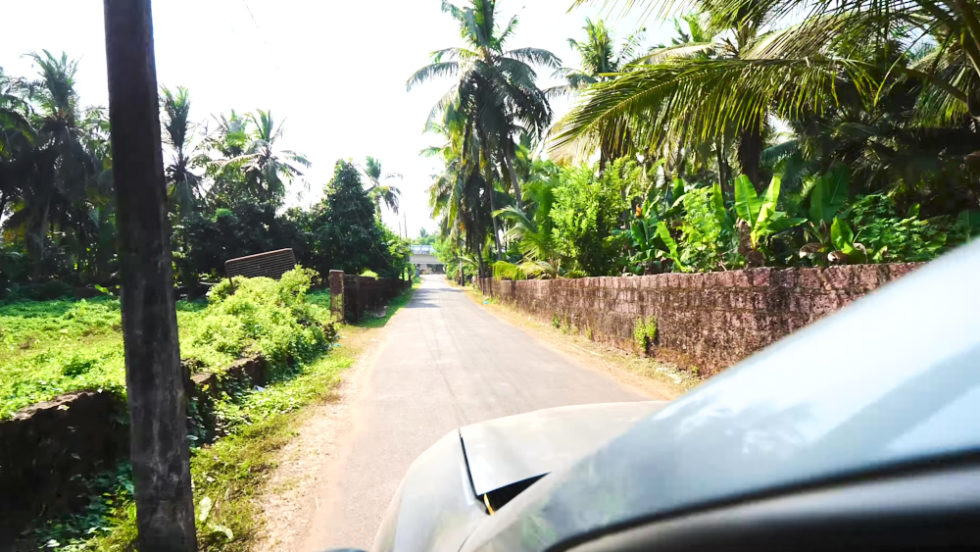 I hope you enjoyed coming with me to my first Indian wedding to enjoy the food in Kasaragod, Kerala, India! If you did, please give this video a thumbs up and leave a comment below. Also, please subscribe to my YouTube channel so you don’t miss any of my travel/food adventures around the world!