My ninth day in Kerala, India began in the city of Kozhikode, also known as Calicut. There, I got to explore more unique Kerala flavors and learned how to make Malabar dum biryani, a delicious chicken biryani that’s popular in Kerala, India! Come along with me as my food adventures in Kerala continue!

My morning began at Kuttichira Biriyani Centre in the city. Calicut is the food capital of Kerala. It’s in the northern part of Kerala, which is famous for its biryani. I’d get to see the entire process of how they make it, explore the city a bit, and then come back to try it! I couldn’t wait! 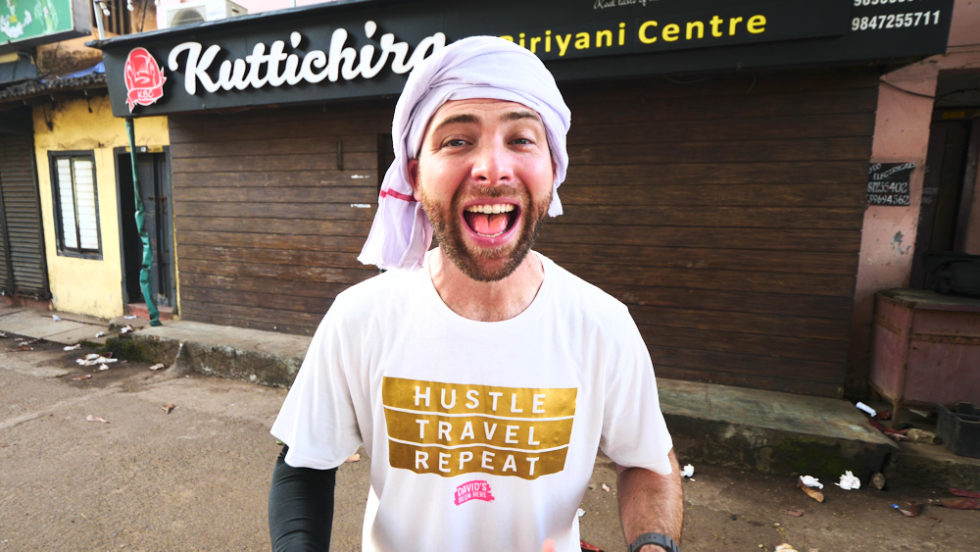 I met up with my friend Shabeer from Travel Explore Channel and we headed inside to begin my Malabar biryani adventure in Kerala, India. I’d never seen the entire biryani-making process from start to finish. Inside, there were guys cutting tomatoes and onions, blending chilies, adding coriander and ginger, frying fish and chicken. They were making both Thelassery biryani and Calicut biryani here. 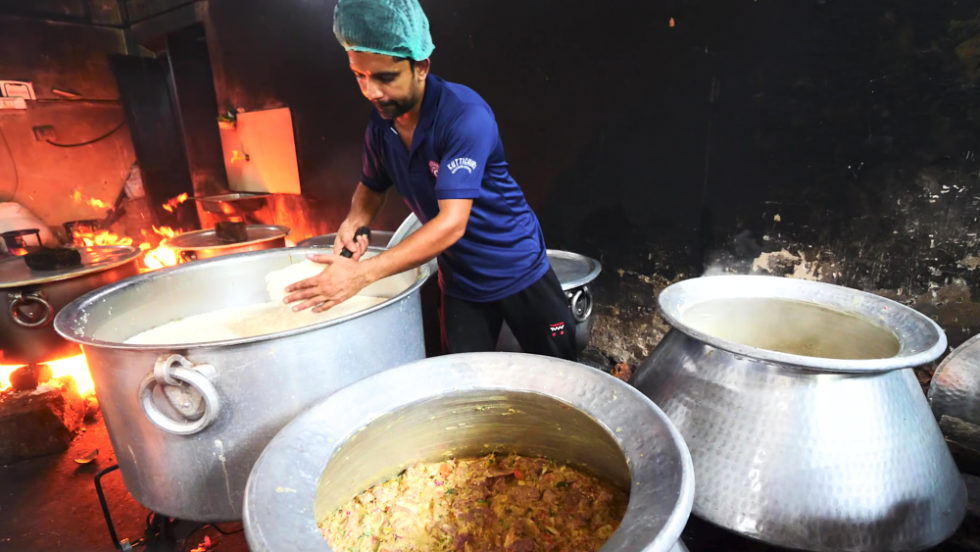 For the Calicut biryani, they added a mountain of onions and tomatoes, garlic, ginger, and chilies. That would make one layer of the biryani. Then, they’d add crispy onions, coriander, and cashews as another layer. Then, the next layer is rice, chicken, beef, and fish. The rice was short-grain rice, unlike the long-grain rice in Hyderabad. 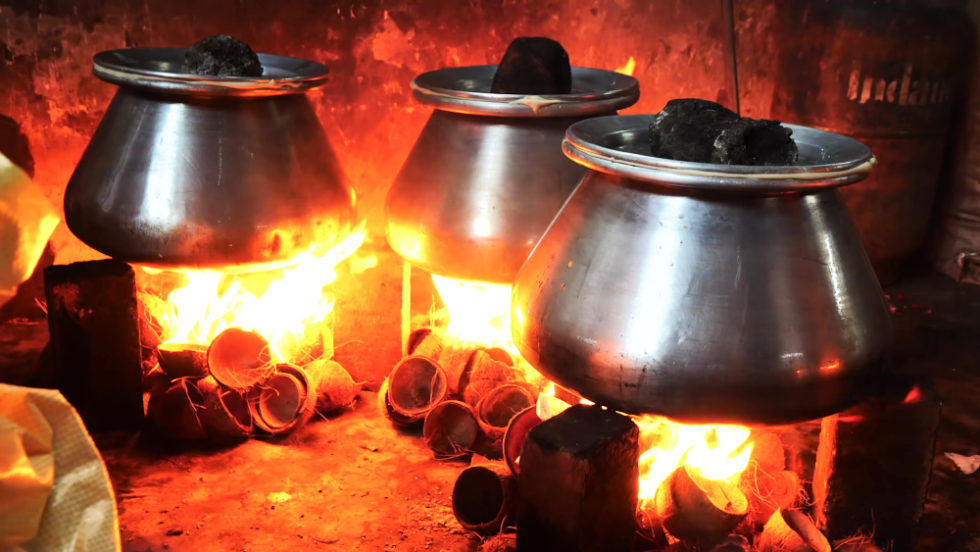 I watched them add onions, tomatoes, garlic, ginger, coriander leaves, and salt to make the biryani masala. They also added curry leaves and chilies. It looked good enough to eat by itself. I got a chance to try it. It was full of flavor and was super spicy with the chilies, and I could taste the curry leaves and coriander, the burst of tomatoes and onions, and more. I couldn’t wait to mix it with the rice, crispy onions, and chicken. I was sure the Malabar biryani in Kerala, India would be fire! 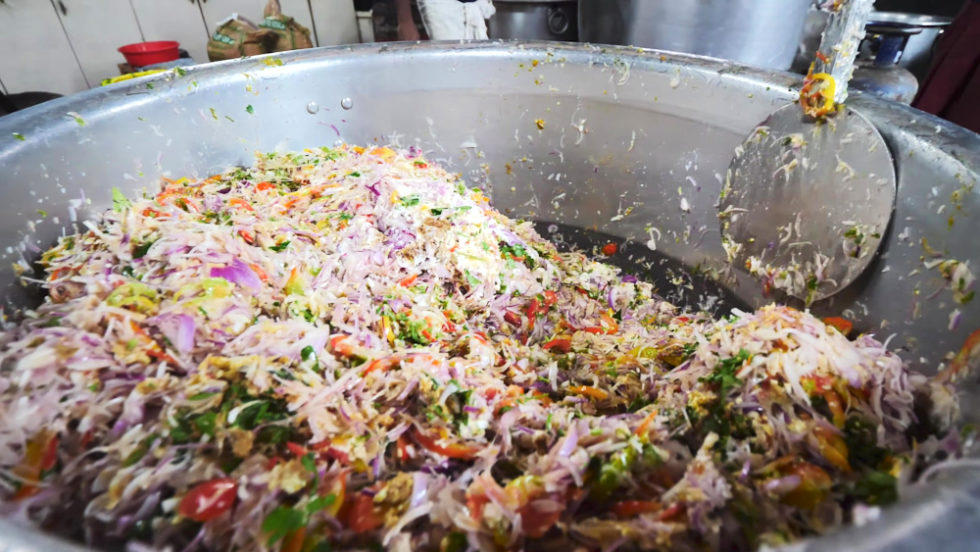 Then, they added the chicken to a huge pot, added beef to another pot, and mixed the masala with both and blended it well by hand. Next, they boil rice, add it to the pots, top them off with crispy onions, and close them for two hours. Before they add the rice to the pots, they add sunflower oil to the masala and meat, mix it well, and flatten it before they add the layer of rice on top. I could smell the aroma already!

After they seal all the pots with dough, they put a brick on top and light the fire beneath it and let it burn for about 15 minutes. The kitchen was so hot! Once it’s done for 15 minutes, they let it cook for 2 hours like a pressure cooker. I got to add some coconuts to the fire. I had a feeling they would make the biryani taste so different. They added some of the embers from below on top of the pots. Now, I just had to wait 2 hours to have my first Malabar biryani experience in Kerala, India! 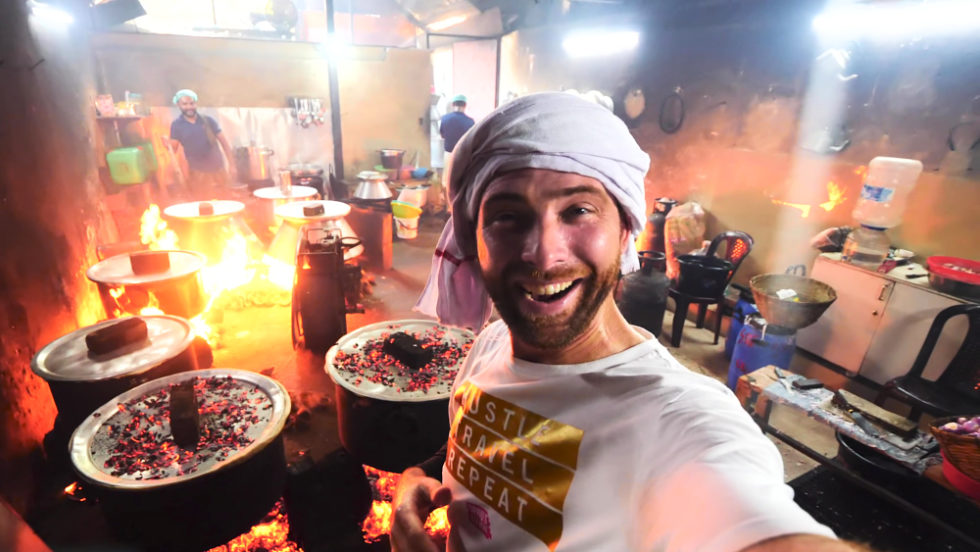 I left the kitchen. The breeze felt so good! Right outside the biryani center was a wall of beautiful murals. A lot of people take photos there. Next to it is Calicut Beach! There’s a gateway to enter it. There’s a nice boardwalk, but just past that, you have to walk though some trash to get to the sand. The beach itself was really wide and there weren’t many people there. It’s Calicut’s longest beach! 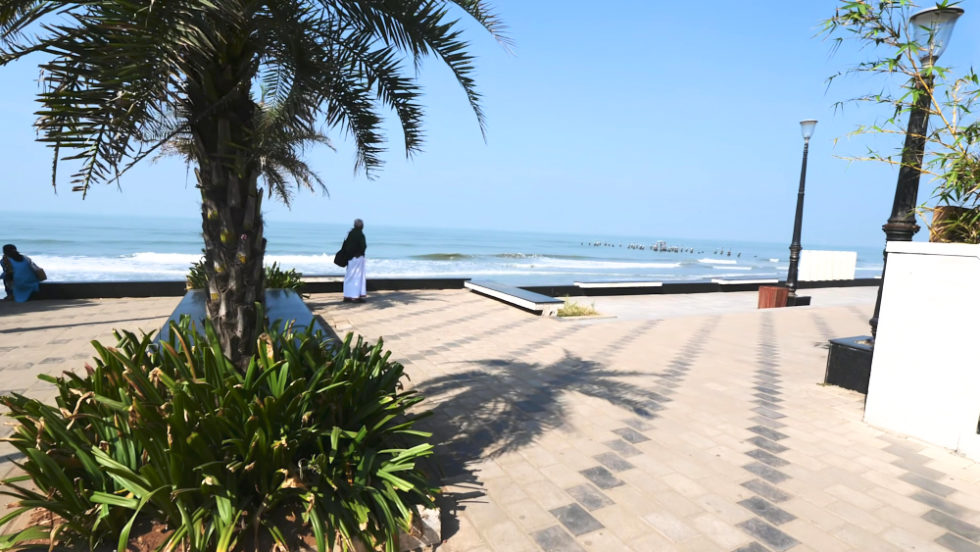 Then, we headed over to the Bombay Hotel to get some snacks! The best way to get there is to take a tuk-tuk, which they call autos here. I love riding in them, but there’s no seatbelt, so you have to hold on! 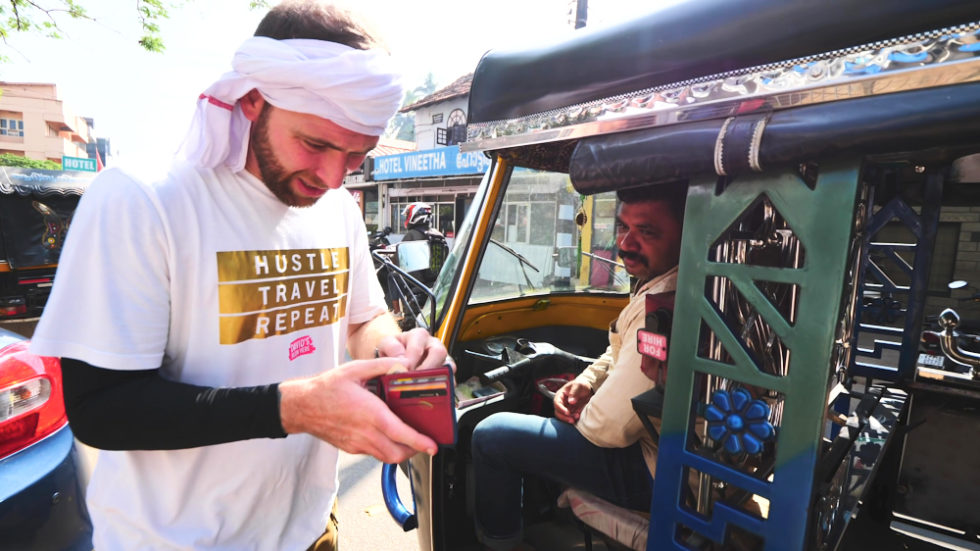 After just a one-minute ride (25 rupees/$0.33 USD), we arrived at the restaurant. The Bombay Hotel dates back to 1949. As with most places called “Hotel” in Kerala, it’s actually a restaurant. I was super hungry, so I couldn’t wait to eat something!

They had lots of fried snacks there. There were also pastries, cakes like carrot cake, banana fry, bonda, vada, and more. I got some carrot cake, banana fry, bonda, and much more! I started with the banana fry, which was a very sweet, fried plantain with batter on the outside. It was really tasty and is one of the few things you can eat in Kerala that isn’t spicy. Next was the carrot cake, which was like pure carrots. It was a dense cake but still had a pudding-like consistency. I don’t usually eat sweets in the morning, but I made an exception for this! 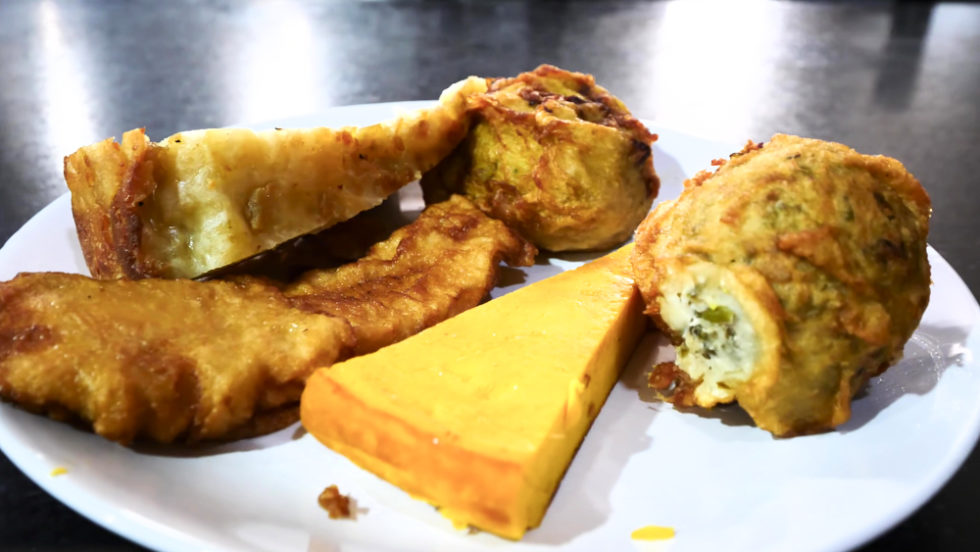 Then, I went for the sugeen, which is full of sugar. It’s super sweet and is one of my favorite fried things in Kerala. It has a super fried outside and is grainy on the inside. Then, I had the bonda, which is made of potatoes. It’s fried mashed potatoes and contains chilies, so it has a bit of heat to it. It also contains onions and sesame seeds and is soft and has a light fry on the outside. 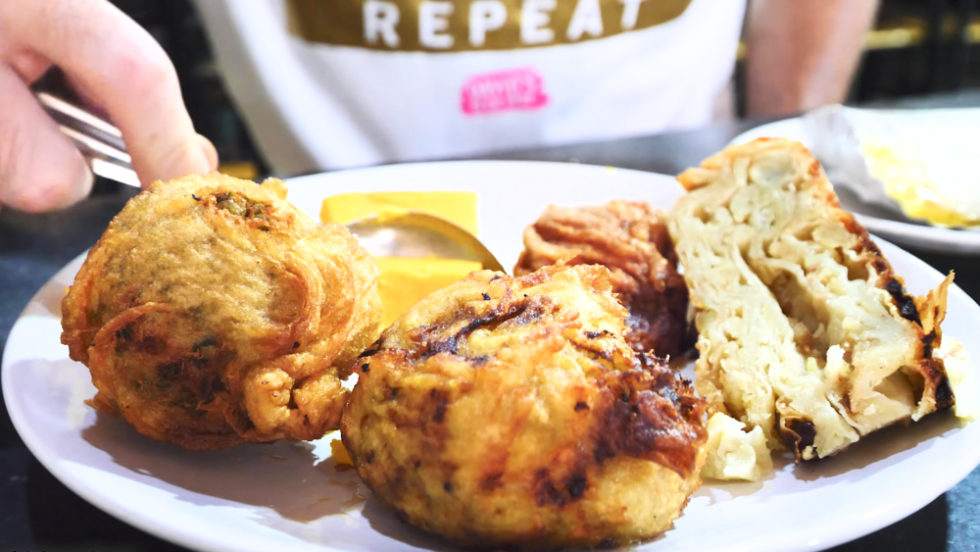 Next, I moved on to the chatti pathiri, which is a layered cake made of rice flour, eggs, cashews, and raisins. It’s sweet and fluffy. I love the layers and the raisins throughout. It was too sweet for me to have in the morning, though! 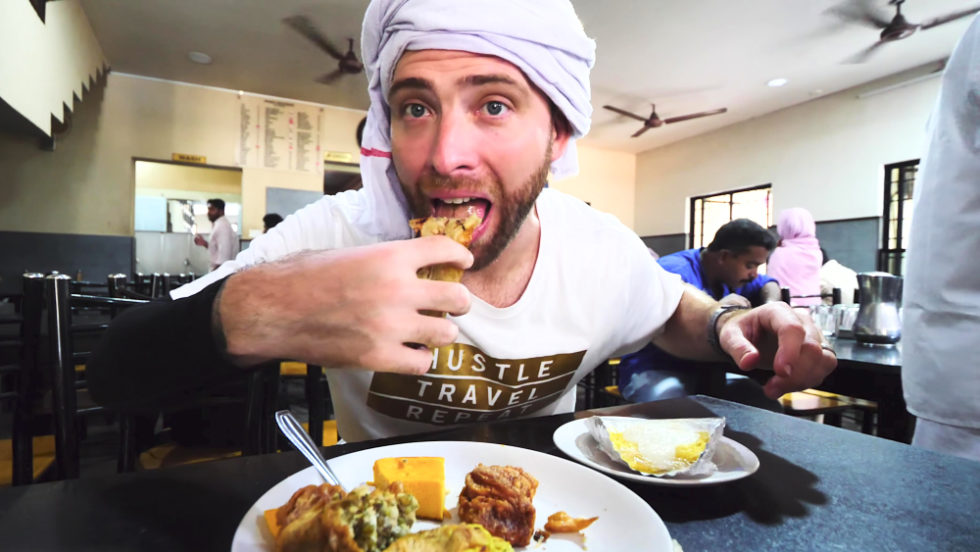 Then, I tried a sweet called muttamala, which is made of egg yolks and egg whites in the shape of a heart. The stringy egg almost looked like thin pasta. The egg whites were smooth and gelatinous, almost like flan, and were super sweet.

Then, I went into the kitchen to see how they make dancing chai, also known as biryani chai. They put chai on the bottom layer, and then puts frothy milk in the middle, and foam on top. I mixed it all together. It looked like a café con leche. It’s scorching hot and is so good! There wasn’t a big difference in terms of flavor, but the layer of foam on top was unique. The chai was my favorite part of the meal, which came to 186 rupees/$2.45 USD. 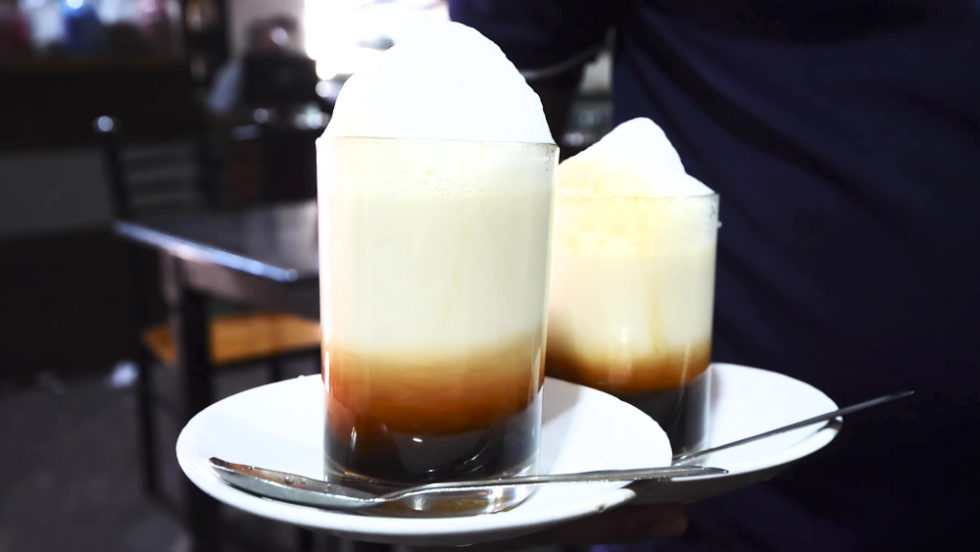 From there, we left the Bombay Hotel and took the rest of our snacks to give away. We took an auto to a mosque. We had 30 minutes until they would open the biryani at the biryani center, so we’d see the mosque for 10 to 15 minutes. This mosque is a medieval mosque. It was very different from other mosques I’d ever visited. 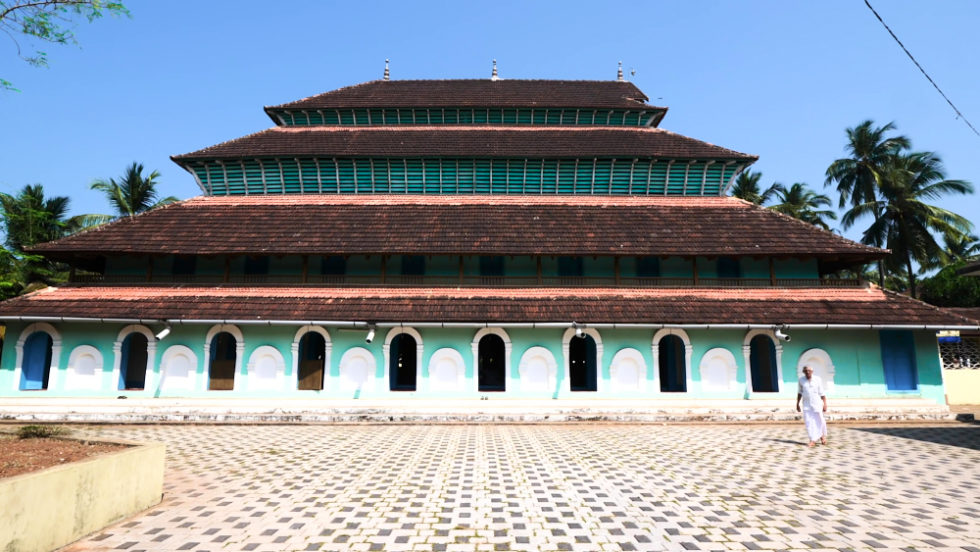 It’s called the Mishkal Palli, or Mishkal Mosque. Unlike other mosques I’d visited, it didn’t have a minaret or a dome. It’s the place to visit if you’re looking for historical attractions. It was built in the 14th century, and all of its walls except for the ones on the ground floor are made of wood. It was partly destroyed by Portuguese commander Alburkar on January 3, 1510. The mosque was a place for stay and study for Muslim scholars during ancient time, and was visited by a number of students, scholars, historians, and research students. 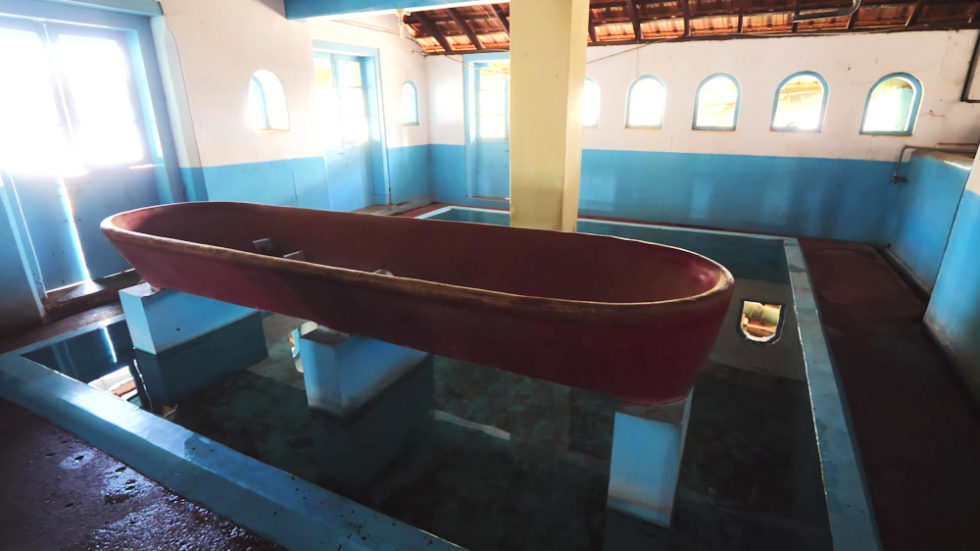 Before going inside, I took off my shoes and socks and washed my feet. We visited the first level and saw an amazing table and the beautiful main level. It was the first medieval mosque I’d ever been to and is the only one surviving in Kerala.

Then, we hopped back in the auto and arrived back to the biryani center two minutes later in time to see them unseal the pots. The aroma hit me as soon as they opened it. Then, they started moving it over to another pot. I could see all the layers as he cut into it. It looked so good and I could tell the Malabar biryani in Kerala, India would be spicy! They separate the rice from the chicken and masala. They first put the chicken and masala on the plate and cover it with rice. I couldn’t wait to eat! 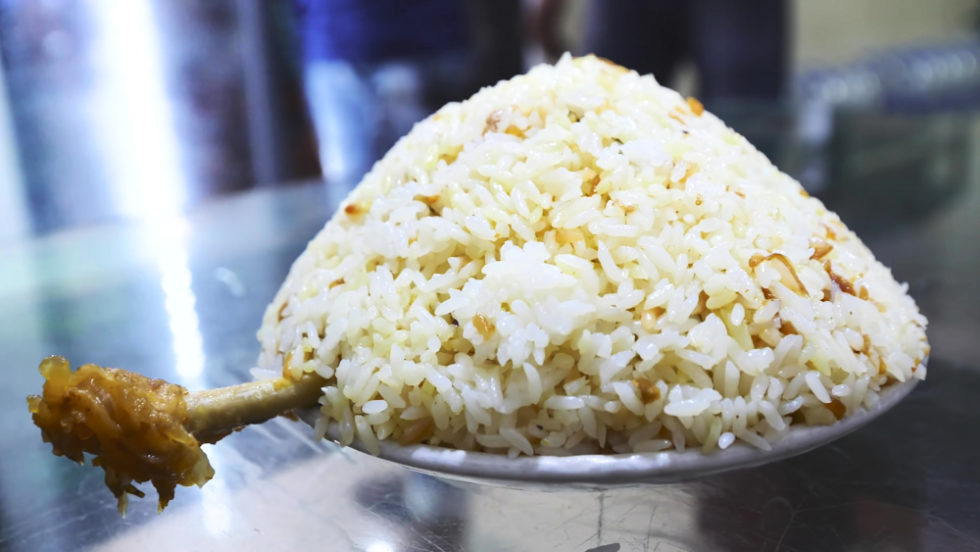 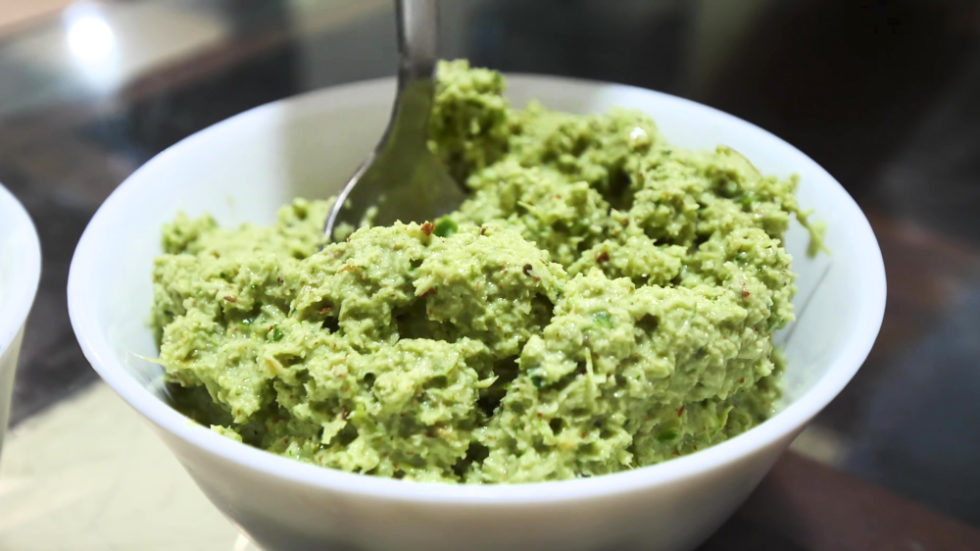 Then, I added more of the buffalo, as I didn’t get enough beef or chicken at first. The beef was so tender and was practically falling apart! This was the best biryani I’d ever had in my life. The chutney gave it such a nice tang. It was unbelievable! My boy Shabeer even said it was superb, and I have to agree that the Malabar biryani in Kozhikode, Kerala, India was out of this world!

Check out the 10 Things You Must Do in Kannur, Kerala, India

The biryani reminded me of some Chinese fried rice dishes I’d had. I dug into the chicken next, which was so hot! I bit right into the drumstick. The meat was falling apart. It was so buttery and tender! Then, I added more mint-coconut chutney to the rice and mixed it up. The biryani was so fresh and affordable. The half-portion of beef was 90 rupees/$1.18 USD, while the chicken was 100 rupees/$1.32 USD. 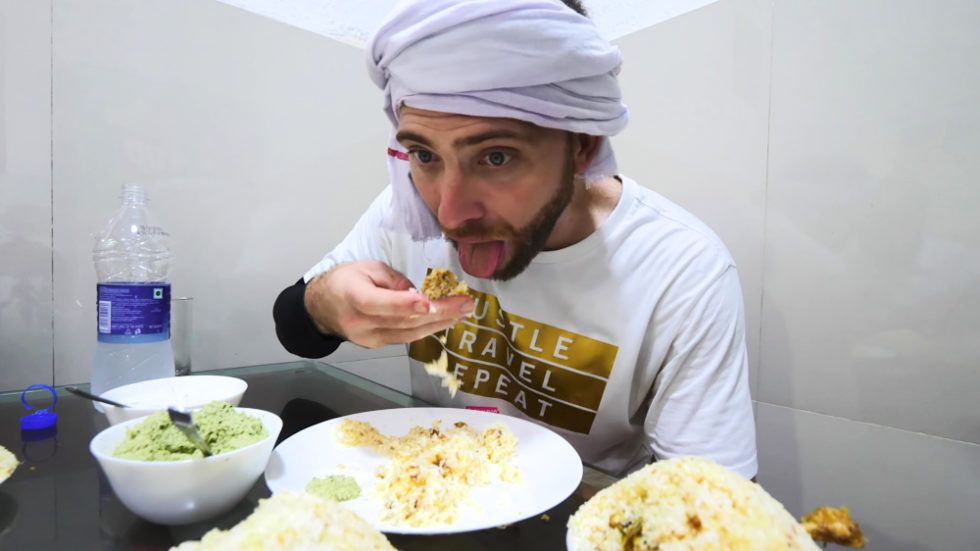 The restaurant has two levels. The first doesn’t have air conditioning, but they do have fans, so it isn’t hot inside. This was my intro to Malabar biryani in Kerala, India, and it blew me away. It truly was my favorite biryani of all time! 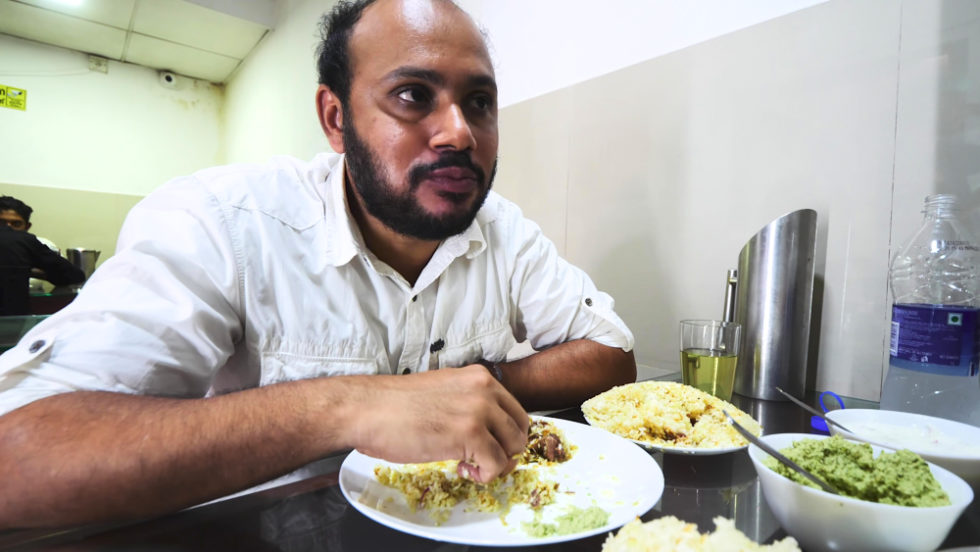 I hope you loved coming with me to try Malabar biryani in Kerala, India! If you did, please give this video a thumbs up and leave a comment below. Also, please subscribe to my YouTube channel and click the notification bell so you don’t miss any of my travel/food adventures around the world!