My ninth day in Kerala, India was proving to be as much of a whirlwind as my eighth, as I headed off to the city of Thalassery in the afternoon after starting my morning in Kozhikode. Come along with me as I try Thalassery dum biryani and visit some Tellicherry attractions in Kerala, India!

I started my day at Tellicherry Fort, an 18th-century fort constructed in 1708 by the French. Thalassery is located in northern Kerala. It was one of the most important trading centers for the Europeans during the spice trade. Many other cities in Kerala, including Kannur, Kasaragod, and Kochi have forts. 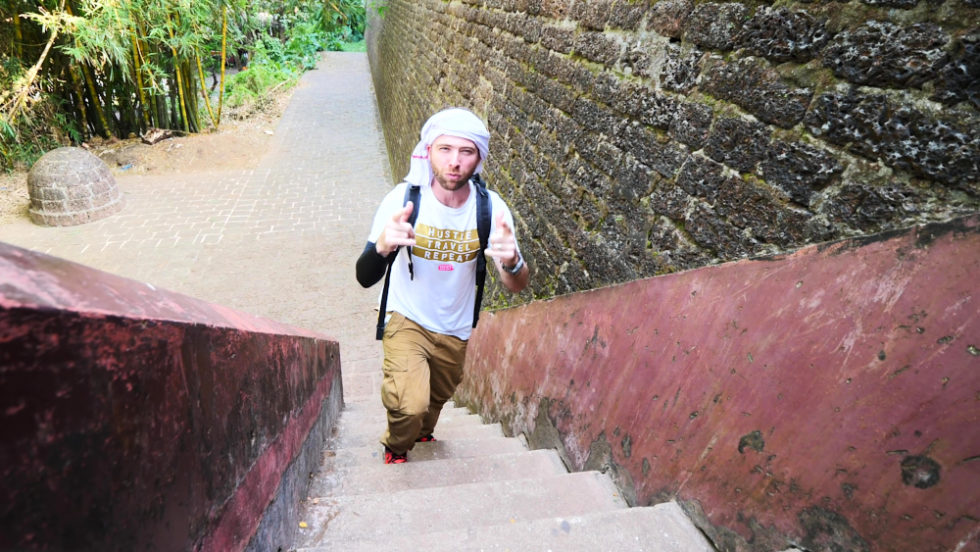 Although Tellicherry Fort was built by the French, it was later occupied by the British, who reinforced it. It has massive, 10-meter walls, from which you get great views over the Arabian Sea and Thalassery. Inside the walls are cottages where the soldiers lived when they occupied the area. At the highest part of the fort is a lighthouse. Just outside the walls, you can see a school and two churches. 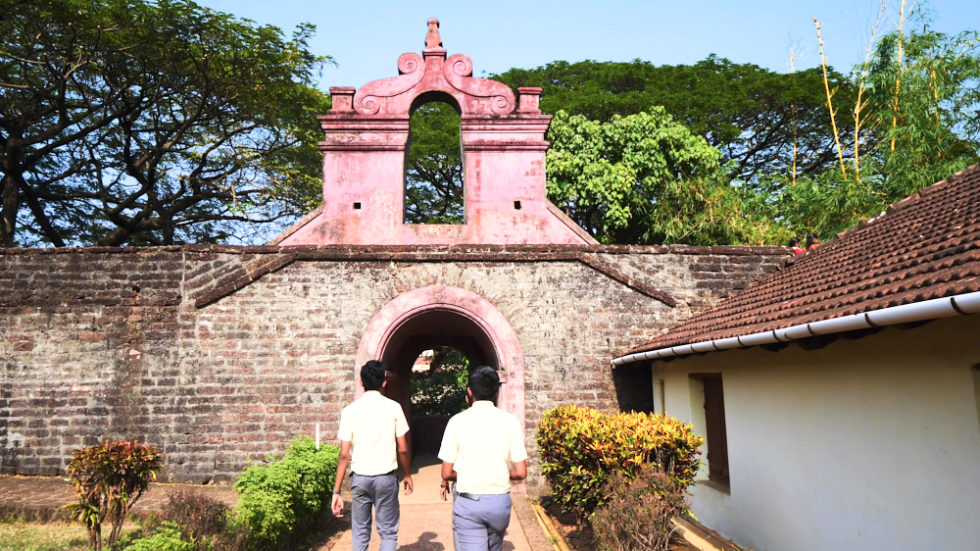 It was easily about 100 degrees outside and it was super humid out, so being outside was brutal. Something that makes Tellicherry Fort unique is that it has secret tunnels that lead to the sea. We walked along the walls and got some beautiful views of the city and the surrounding area. There were tons of trees and short buildings no more than 3 or 4 stories tall. The structure was beautiful and the walls were so huge! It’s a great place to get some fire Instagram photos, along with the entrance!

Then, we left to go get some Thalassery dum biryani at the Paris Hotel in Kerala, India. Thalassery is a small town between Calicut and Kannur. It’s famous for its fort and biryani. There’s one main street and a few side streets, along with all the things you’d expect in India: lots of commercial space, lots of people, markets, motorcycles, and tuk-tuks. 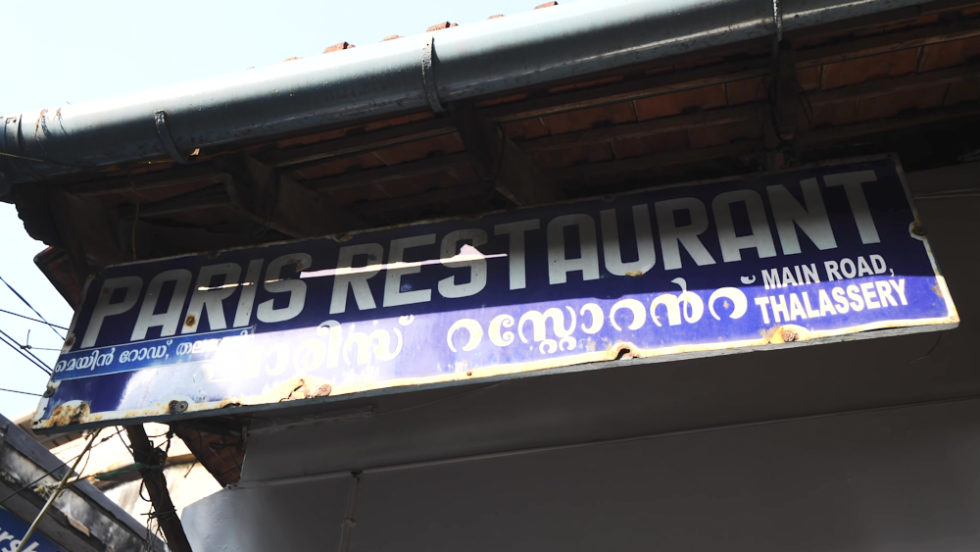 We arrived at the Paris Restaurant, home of the Thalassery dum biryani in Kerala, India and visited the kitchen. I saw some ghee rice and then saw the biryani, which had been cooked with banana leaves on top. The aroma of the rice hit me. I watched as the cook sprinkled fried onions and coriander on top and moved it to another container. They do this to keep the rice on the bottom, which they then top with the rice on your plate. 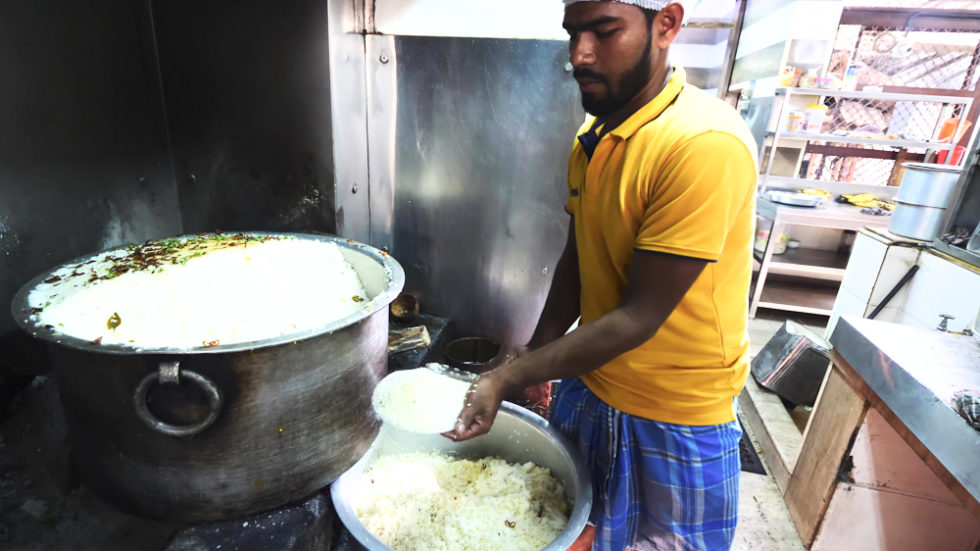 Back at our table, we started with a small portion of Thalassery chicken biryani with a side of coconut chutney and mango pickle, and salad with yogurt that contains onions and curry leaves. I dug right in with my hands and grabbed a tiny bit of chicken with some rice. I loved the onions. It was light on the spices and the short-grain rice was really nice. It wasn’t too hot, either. Then, I tried some of the coconut chutney by itself, which was like tender coconut turned into a chutney. The chutney gave it a nice crunch and a tropical spin! It blended really well with the grains!

Then, I took the chicken leg and bit right into it. It fell right off the bone! The difference between this chutney and the Calicut biryani is that this one didn’t contain coconut-mint chutney. It’s also less aromatic and contains less spices, but is still very good. But they both use a short-grain rice. Then, I dipped my entire finger into the mango chutney and licked it to try it out. It was strong, but if you like mango, you’ll love it! 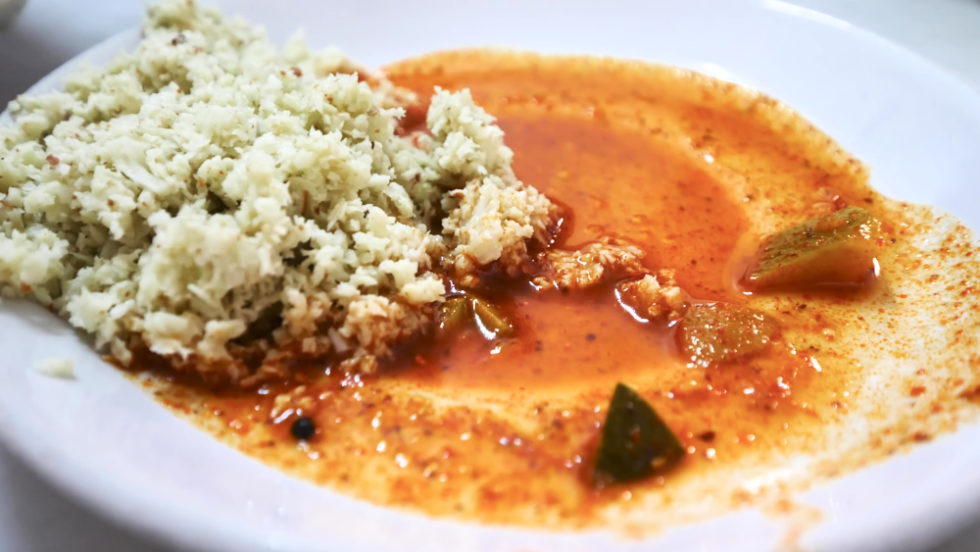 Mixed with the biryani, the mango chutney was outstanding. The raisins in the biryani gave it a nice, fruity flavor. The caramelized onions also gave it a nice crunch. Mixing the coconut chutney, mango chutney, and the biryani was the best! Between this and the Calicut biryani I’d had that morning, I’d eaten two of the best biryanis on the planet in the same day! 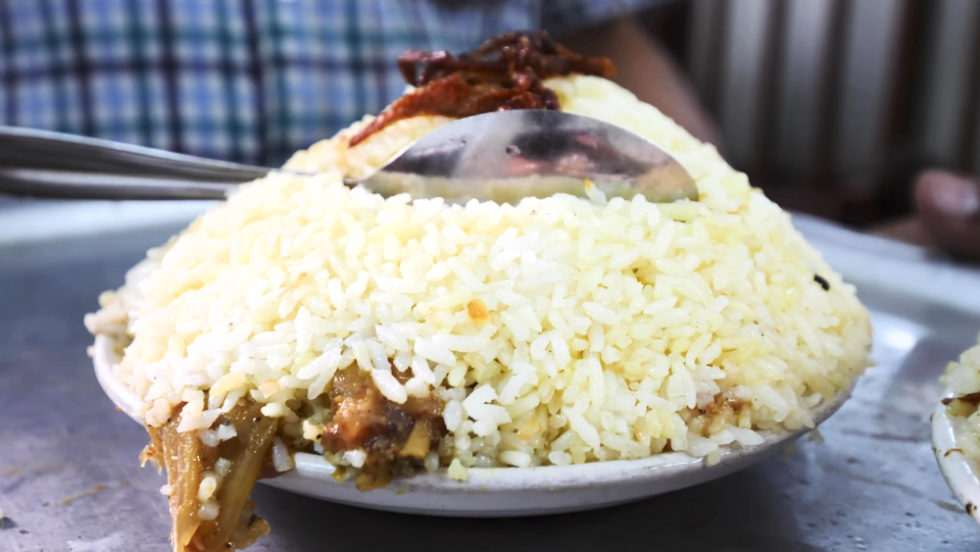 Then, I added the yogurt salad, including the onions and cucumbers, and mixed it with my hand. It tastes so much better when you use your hands. It just doesn’t taste the same when you use utensils. The salad was like a nice curd and the onion gave it a nice crunch. 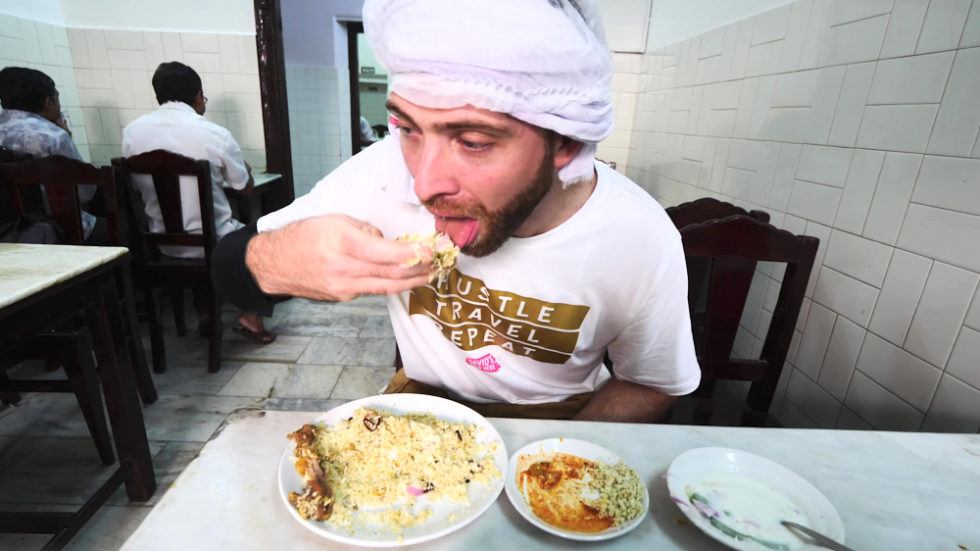 Then, I added all of the coconut chutney and mango to the biryani. I mixed it well, which is how all the flavors come out. The pickle and the coconut were unbelievable. This was one of the ultimate biryanis ever! And as great as the biryani is, there are so many other dishes to eat in Kerala, including meats, parathas, and more.

After eating, we headed to a spot in the area called Firoz Cool Bar, which sells juices and shakes. I tried a mixed drink called the Cocktail that contained dried fruits, nuts, papaya, carrots, milk, pomegranate seeds, banana, and more. It was like a cross between a smoothie and a slushie. There was frozen milk in the middle. It was so refreshing in the heat and only cost 60 rupees/$0.79 USD! It melts after just a minute and was so creamy! 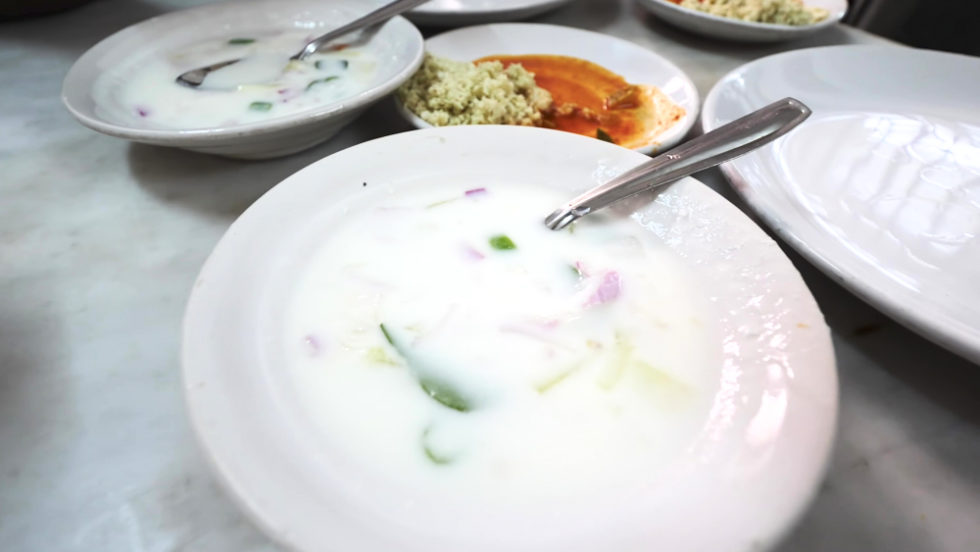 Then, we headed to a snack shop where they had dozens of different snacks, including a bunch of thin fries with masalas on it, banana fry, lots of cakes, hot milk with semolina. The bunch of fries was actually called chicken legs, even though it’s made of thinly-cut potatoes, masala, and curry leaves. It was so hard, I almost broke a tooth! Flavor-wise it reminded me of papitas fritas. It was good but hard to chew. 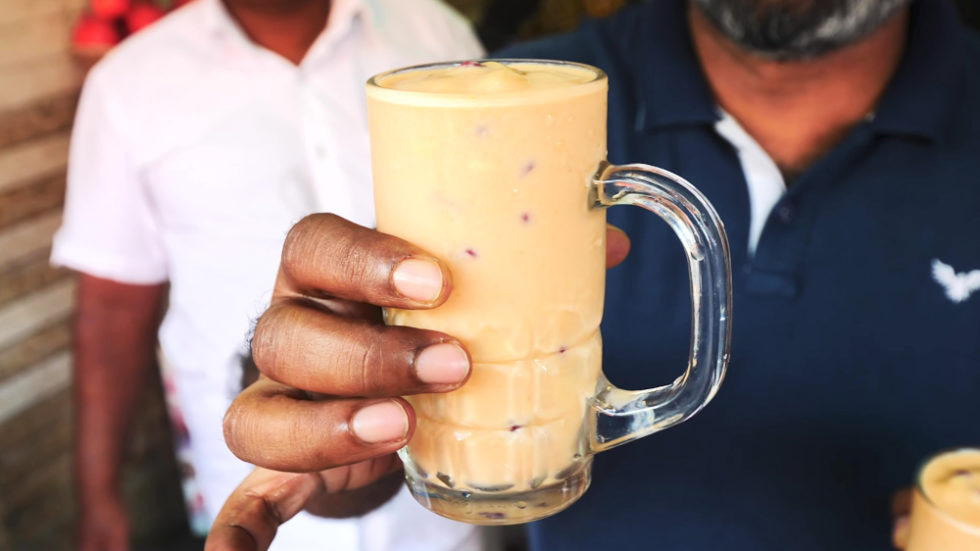 Then, I got a hot milk with semolina, noodles, raisins, and salt, which was similar to lassi, but hot and more watered down. It was really hot, which made me even hotter. But it was really good. It contained a lot of things that go down your throat! Then, we headed to Thalassery Pier, which is a long concrete pier where you can see the water breaking on the rocks and the beach.

Next, it was time for us to head to Kannur! I watched a guy sharpening a knife with a converted bicycle. It’s the most medieval thing I’d seen in India! Before we left, Ebbin met some fans. Along the way to Kannur, we drove to Muzhuppilangad Drive-In Beach, which is super hard to pronounce! I got out of the car to see a train pass on the railway line up ahead, and then we drove to the beach. 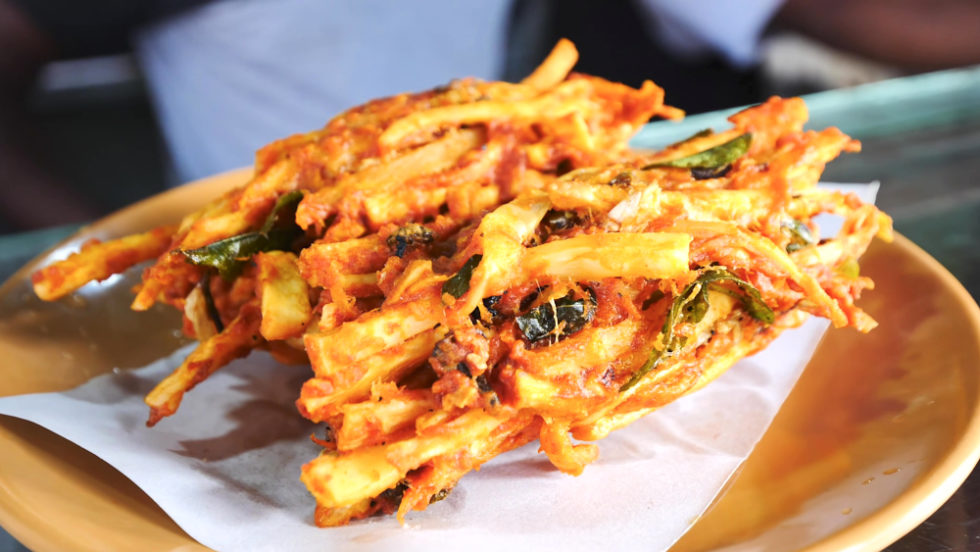 The speed limit on the beach is 20 kilometers. It was my first time driving onto a beach. It was so awesome and really beautiful. There were lots of families hanging out there. We had missed the sunset, but it was still truly amazing. 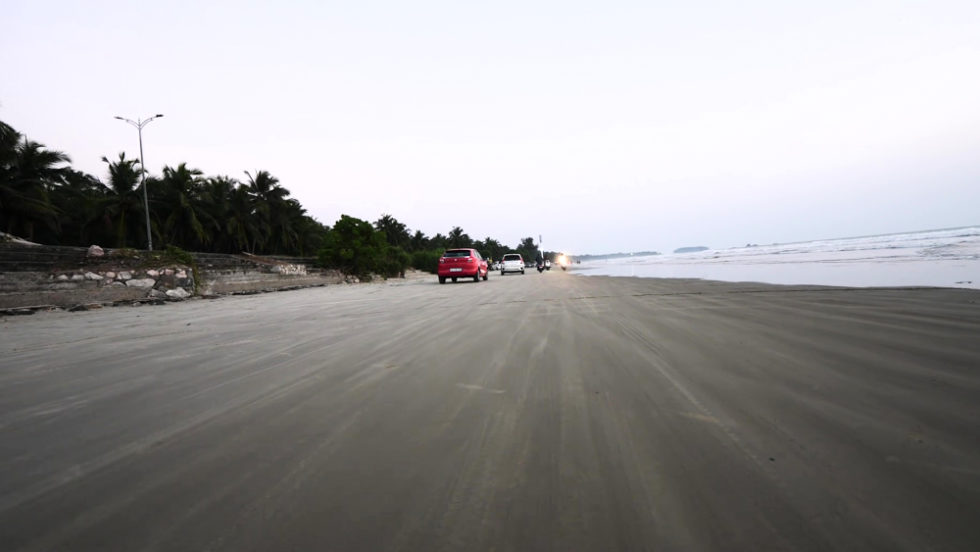 We drove to the end of the beach. The sand is super packed and dense and the beach is wide, which is why driving is allowed on it. There were vendors selling snowcones and you can also play soccer. You can also go in the water. You have to go there when you’re heading to or from Kannur! We continued toward Kannur, where we’d be staying for the next two nights. We’d be staying at the Seashell Haris Beach Homes, a coastal resort that Ebbin had stayed at several times. They have 12 rooms in total.

There, I met Roshan and Mr. Haris. I stayed in an extension of the property. My room had a view of the beach and I could hear the water from the balcony. There was also a large bed, a closet, a mirror, a desk, a table, and a nice bathroom! 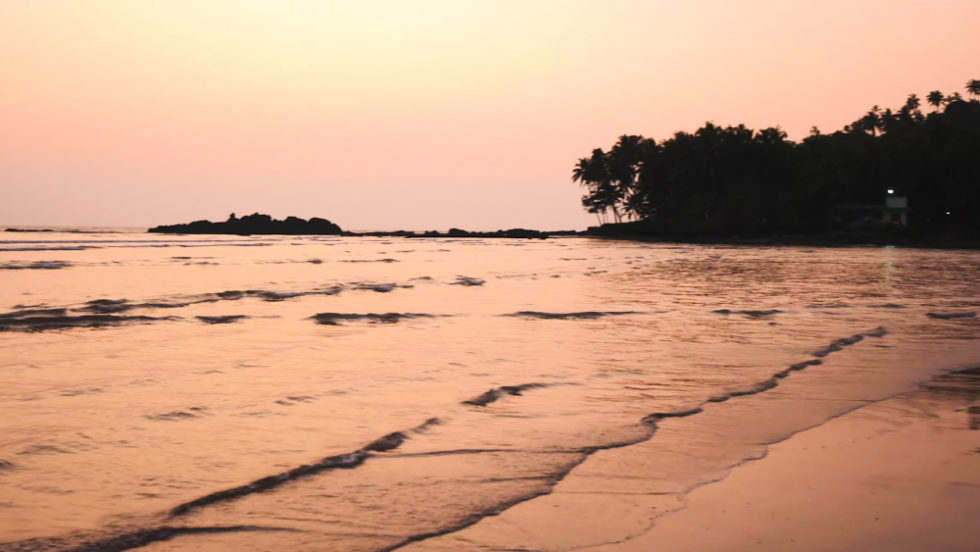 When you come to Kannur, I highly recommend doing all the things I did. You definitely have to try the Thalassery dum biryani when you come to Kerala, India, and you must visit the drive-in beach. I have to thank my boy Ebbin for bringing me here. Follow him on Instagram and check out his travel and food YouTube channel! 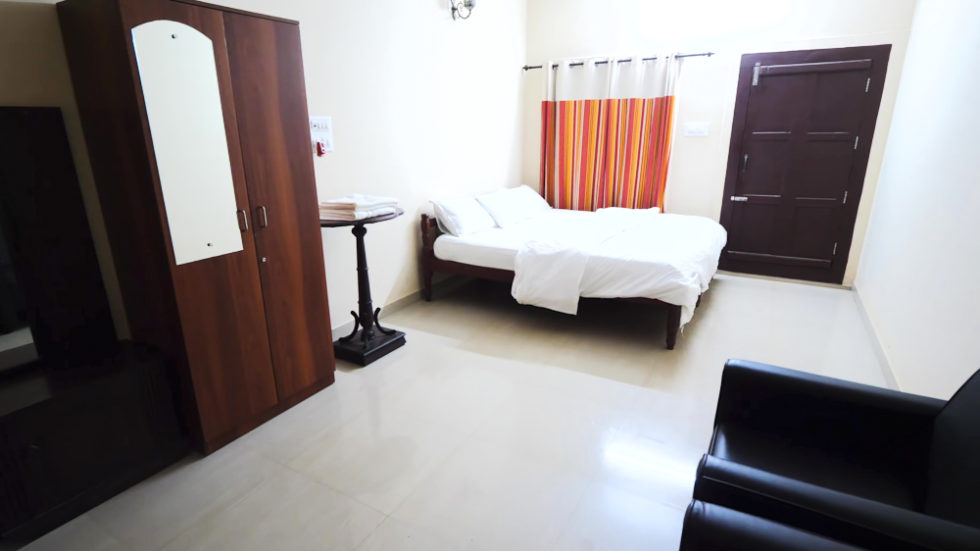 I hope you liked coming with me to have Thalassery dum biryani in Kerala, India! If you did, please give this video a thumbs up and leave a comment below. Also, please subscribe to my YouTube channel and click the notification bell so you don’t miss any of my travel/food adventures around the world!