I woke up early on my third day in Albania and hit the ground running with a delicious and exotic breakfast! Come along with me as I have rare Albanian slow food for breakfast, including an amazing veal head stew, in Tirana, Albania!

My day began on a beautiful Saturday morning next to Tirana Lake in the capital city, Tirana. It’s an artificial lake that was built in 1955. It’s surrounded by a beautiful park and residential buildings and commercial space. 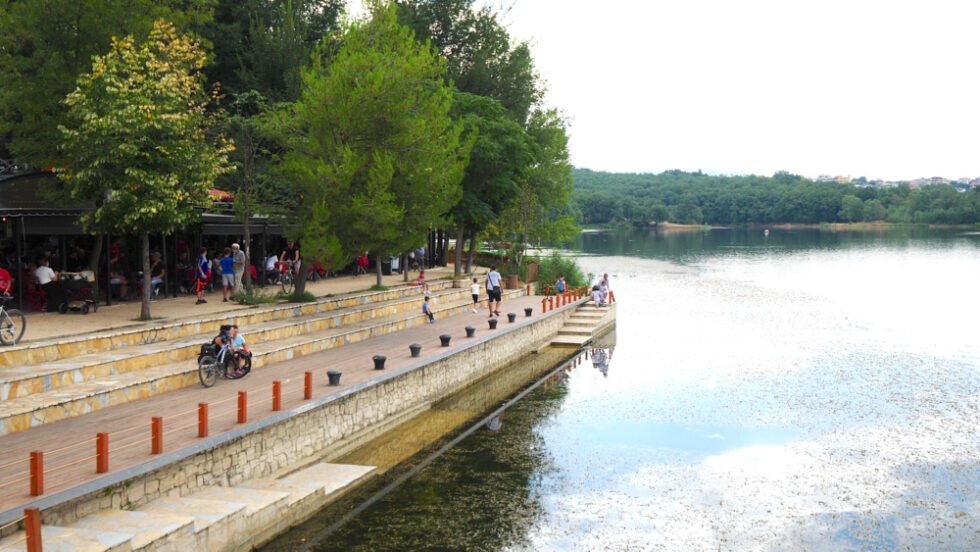 I’d be having breakfast nearby at Mullixhiu (which means “The Mills”), a restaurant that’s usually only open for lunch and dinner, but the owner opened it up early for me! I was lucky that he did, because I was hungry and ready to eat!

My friend Ani from Balkan Pearls Tour Operator and I met Bledar Kola, the owner and chef at Mullixhiu. Before my tour of the restaurant, he gave me a drink made from Cornelian cherries. They have three mills there, where they make flour to use in bread and pasta. One of their pastas is an amazing Albanian pasta called yufka, which is essentially tagliatelle but with meal added to it. 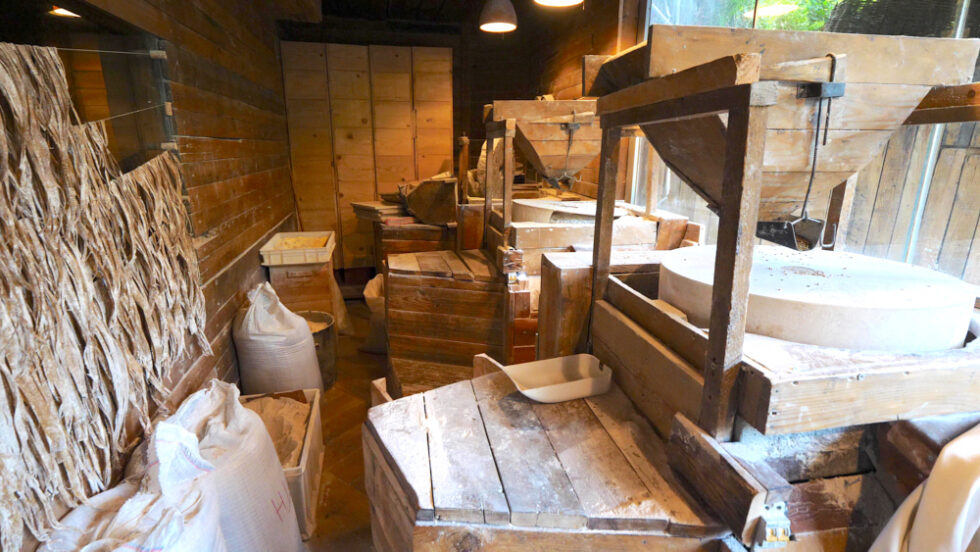 First, they add rye into the mill, which grinds it into flour. He would be making me a crumbled yufka dish called petka, which they pan-fry with butter. The cornelian cherry juice was amazing! It was a little sour but nice! Then, I saw the types of breads they make including rye and oat, and muffins. They also make honey and sun-dried tomatoes! 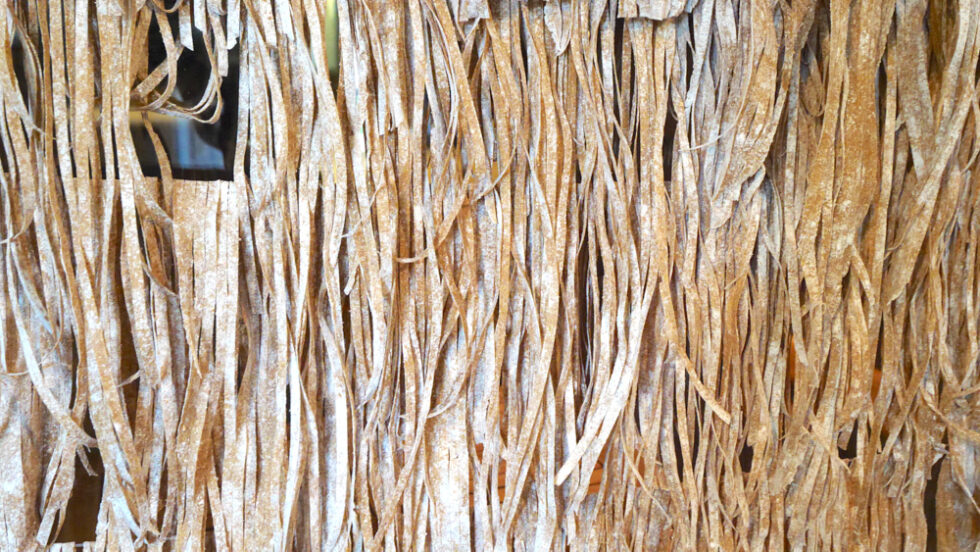 The main dining hall is rustic and Nordic-inspired, so it’s all wood. There are drawers in the table where you’ll find your cutlery and napkin. They also have lots of authentic Albanian wines. 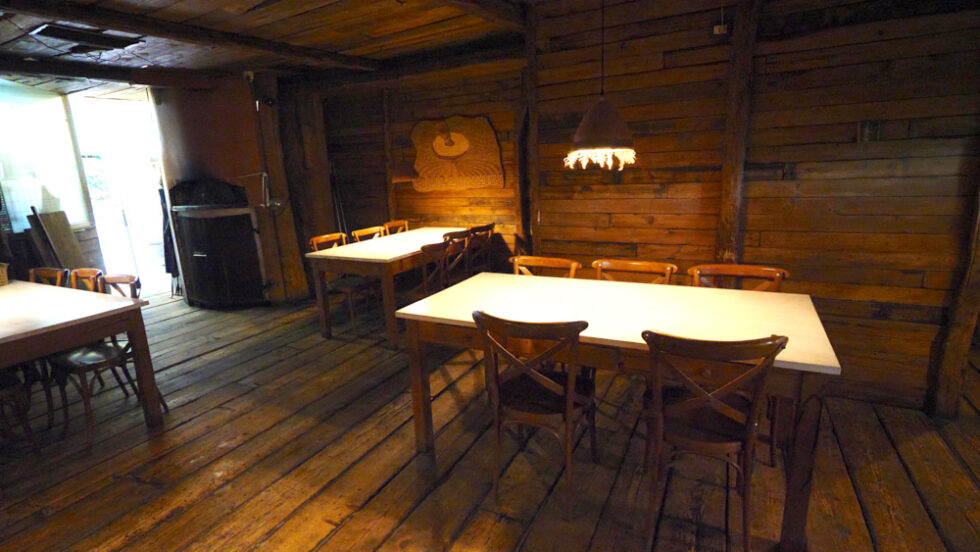 Then, it was time to eat! We had lakror, which is a meaty pastry with tomatoes; petka with butter; trahana with cheese on top; and paçe koke (a braised Albanian veal head stew). 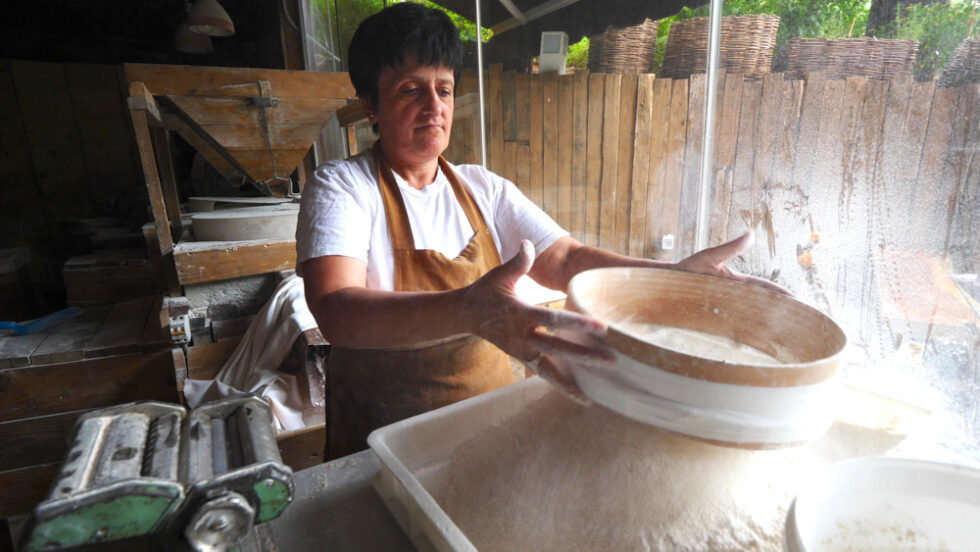 I started with the trahana, which comes in over 1,000 varieties! It’s bulgur wheat and is super grainy. I loved the salty goat cheese and how light the dish was. The combination of textures was really nice, too! 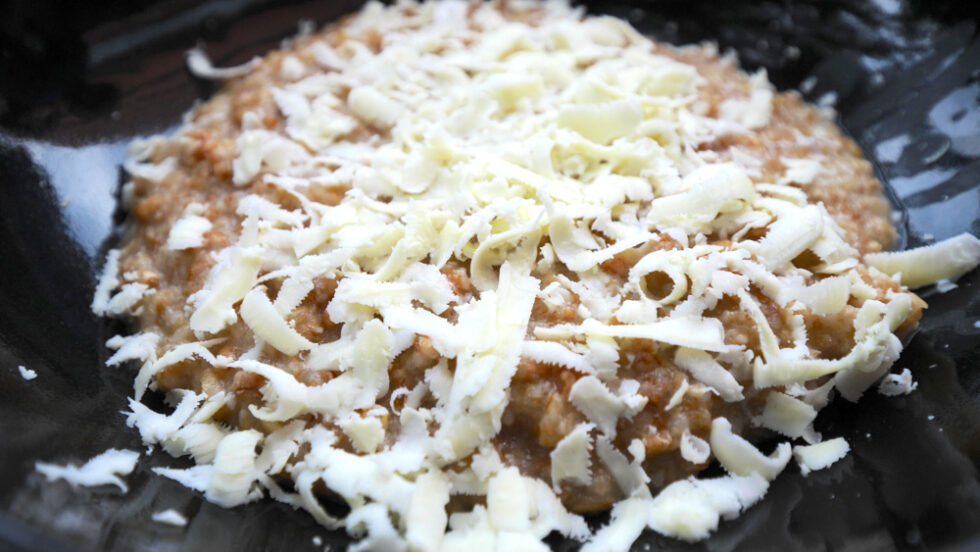 Next was the petka, a dish that comes from the Korcë area. It looked like a creamy, square Italian pasta with butter! It sometimes comes with duck. It’s light on flavor but really filling.

Then, I tried the lakror, which has several names and looks similar to a multi-layer pizza crust! It had so many different textures. Next was a fermented corn drink called boza, which is also found in northern Africa, central and western Asia, and the Caucasus region. I’d had something similar in Lesotho. It’s thick and bitter! 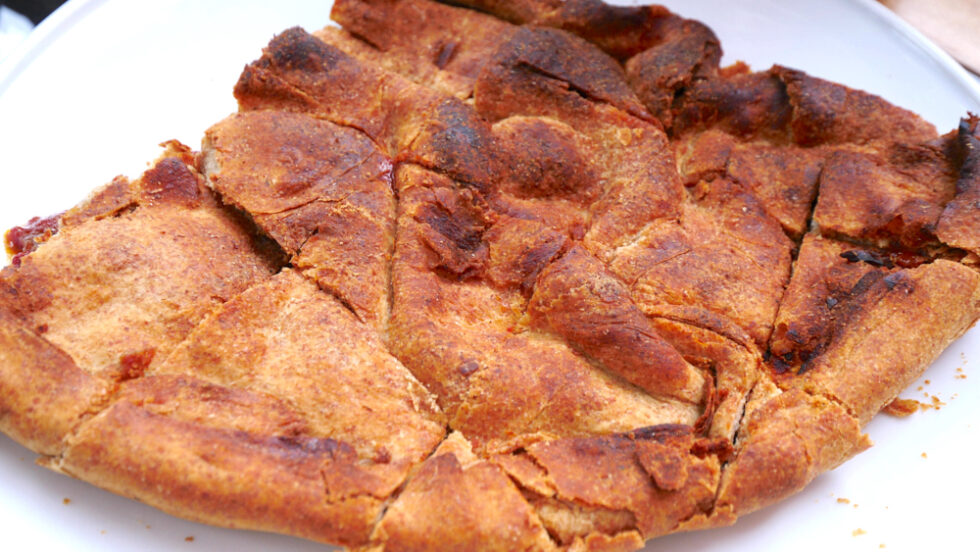 Next was the paçe koke, which also contained lots of organ meat. It was so good and full of rich, meaty stock and peppery flavor. I loved the brains, cheek, tongue, and fat in it! The broth was unreal. It’s the ultimate hangover cure! I wasn’t feeling well at first, but the stew made me feel much better! It was so good I asked for seconds! The Albanian slow food in Tirana, Albania is out of this world! 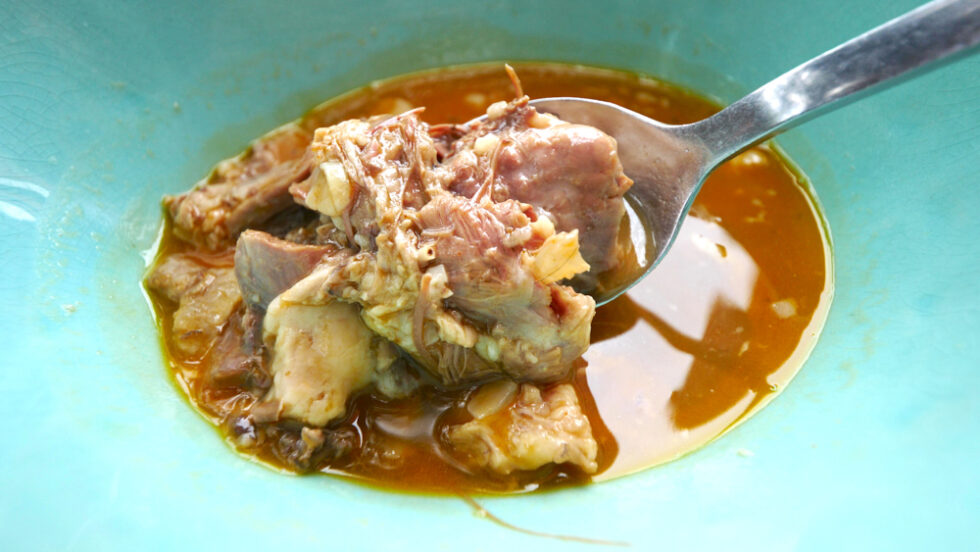 Dessert was boza with ice cream in it! I could taste the milk and corn, and the sourness of the corn balanced the sweetness of the milk. It was plain in flavor but so good! 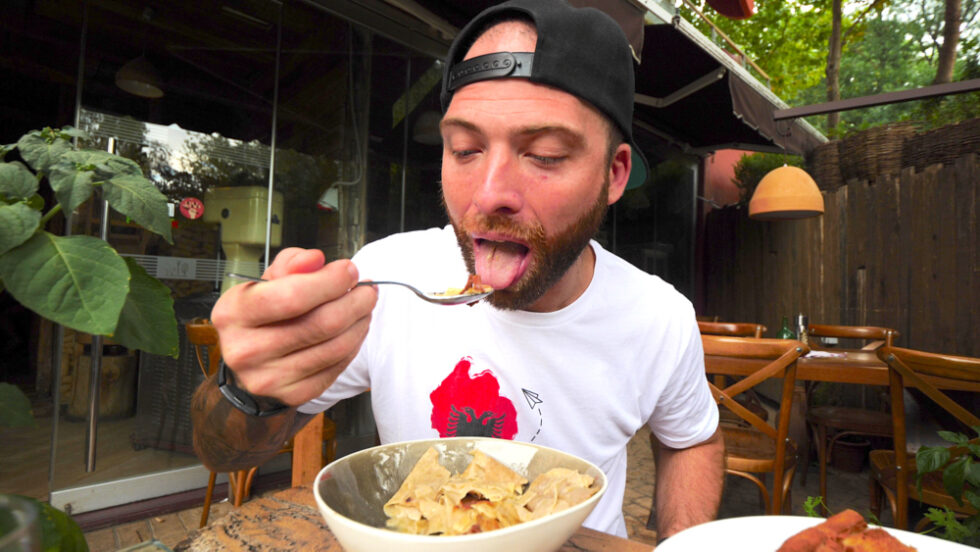 Then, Ani and I explored the Park of Tirana, which is also known as the Lungs of Tirana. It’s near Mother Teresa Square and is a big recreation area for kids and families. We met a woman who has a scale. You pay her 20 cents to see what you weigh. I had gained 5 kilos so far! 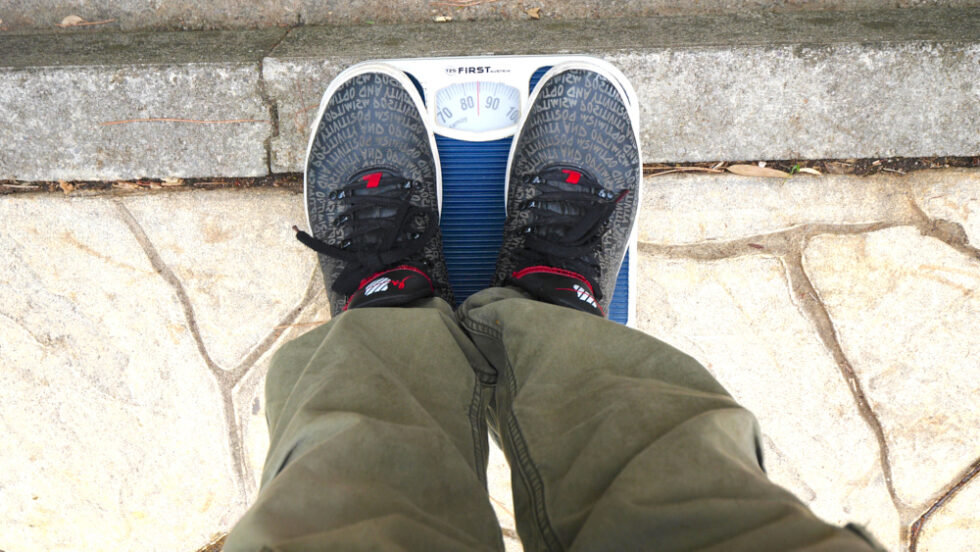 Next, we hopped in the car to drive to Krujë! There was a super congested roundabout area leaving Tirana but then we reached the open highway.

Check out the Things to See and Do in Krujë, Albania

Kruje is an important medieval city between Tirana and Skhodër in the Albanian Alps. We were in a valley between mountains on the right and left. We passed through the town of Fushë-Krujë, which is famous because President George W. Bush visited a cafe there. There’s even a statue of him there! 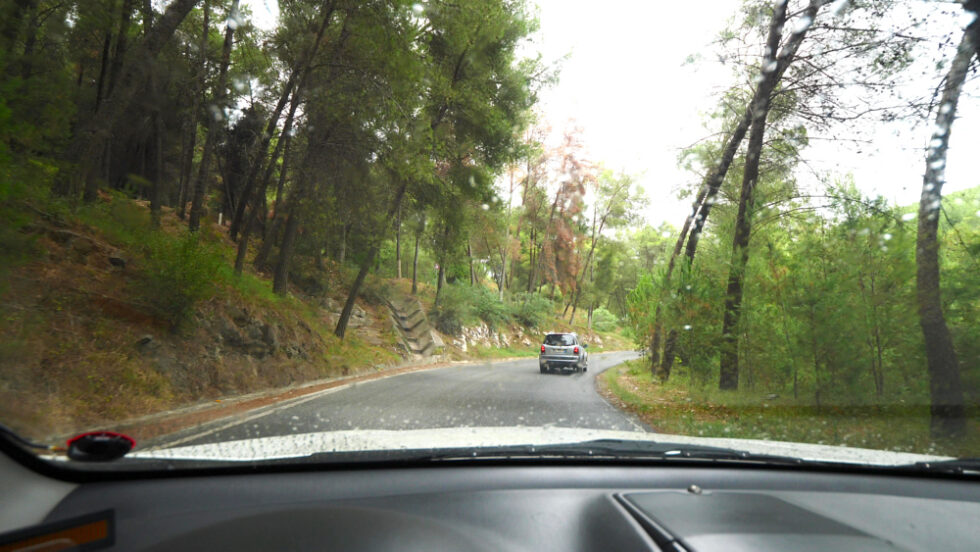 Krujë is super high up in the mountains and was a strategic location in a battle between Skenderbeg and Ottoman invaders. It’s 600 meters above sea level! I came across a Hermann’s tortoise crossing the road along the way and took a winding road to Krujë Castle. Along the way, we had beautiful views of the town! I couldn’t wait to explore it! 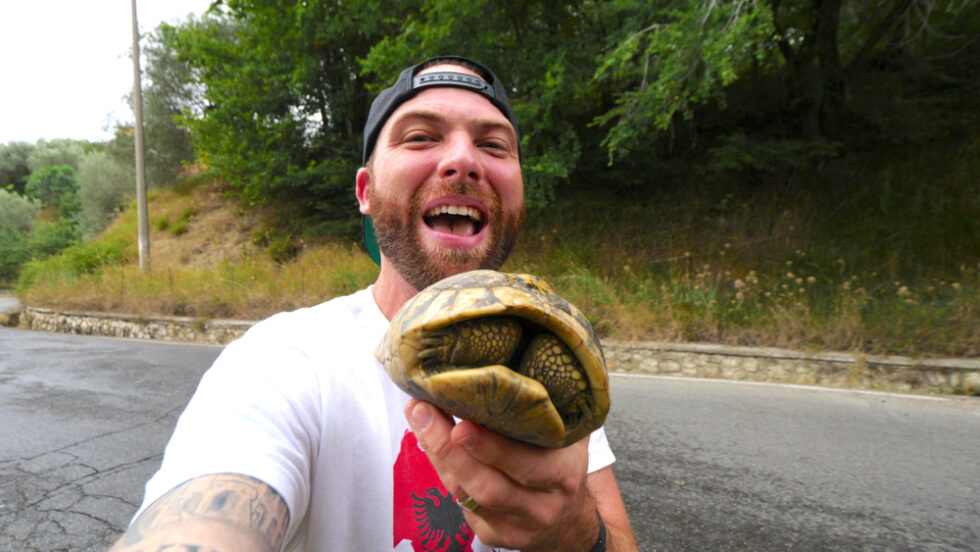 Huge thanks to my friends at Mullixhiu, Balkan Pearls Tour Operator, and Rental Car Albania for an amazing morning of rare Albanian slow food in Tirana, Albania! 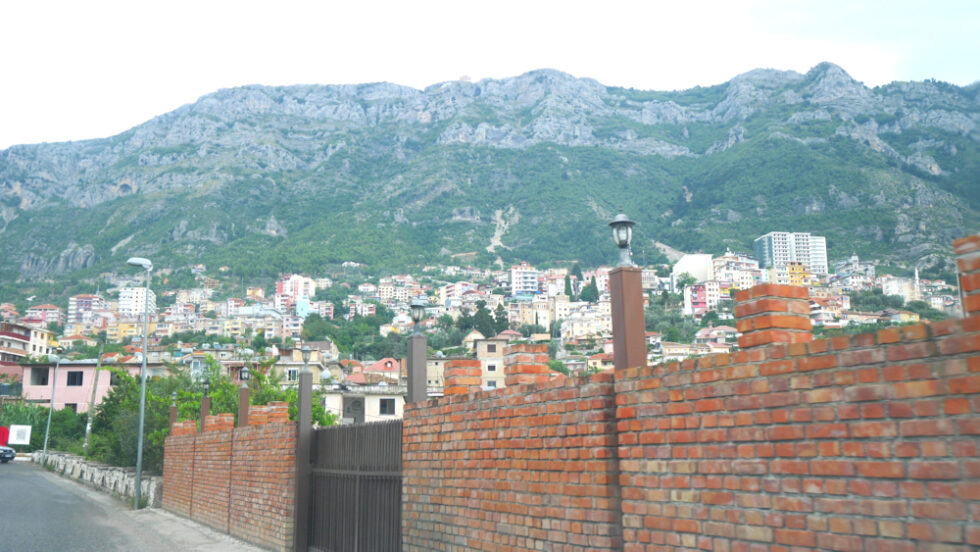 I hope you liked coming with me to have my Albanian slow food breakfast in Tirana, Albania! If you did, please give this video a thumbs up and leave a comment below. Also, please subscribe to my YouTube channel and click the notification bell so you don’t miss any of my travel/food adventures around the world!