With both São Paulo and Curitiba now in my rearview window, my adventures in Brazil continued in the city of Blumenau! Join me as I try some outstanding Brazilian German food in the country’s beer capital, Blumenau, Brazil!

My friends Guilherme and Rafa from Rio4Fun and Rio4Food and I only had a few hours to explore Blumenau, as our main destination was the city of Florianópolis a few hours away. Blumenau was founded in 1865 by German immigrants and is famous for its epic Oktoberfest every September and October. 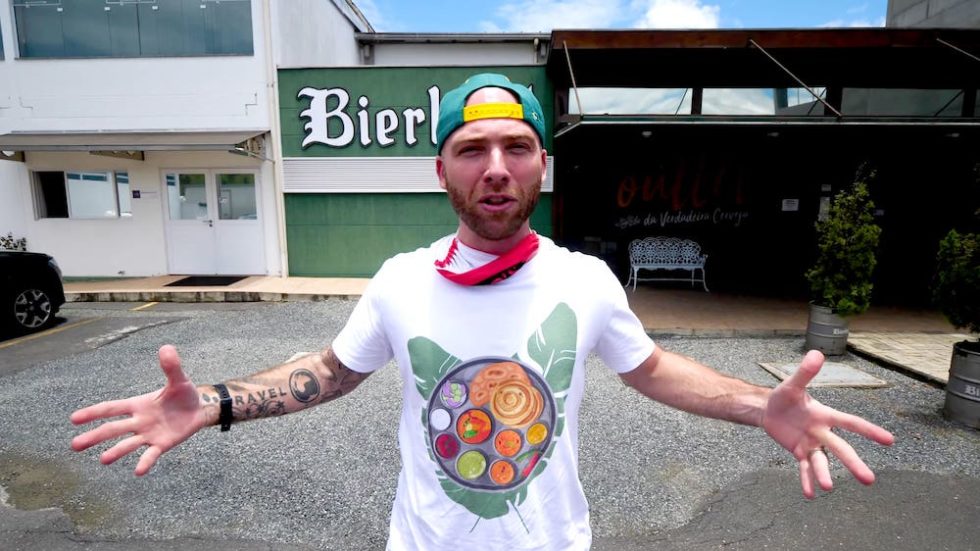 Unfortunately, I was there at the wrong time of year to attend the Oktoberfest, but I could do the next best thing, which is explore the local Brazilian German food and beer culture! 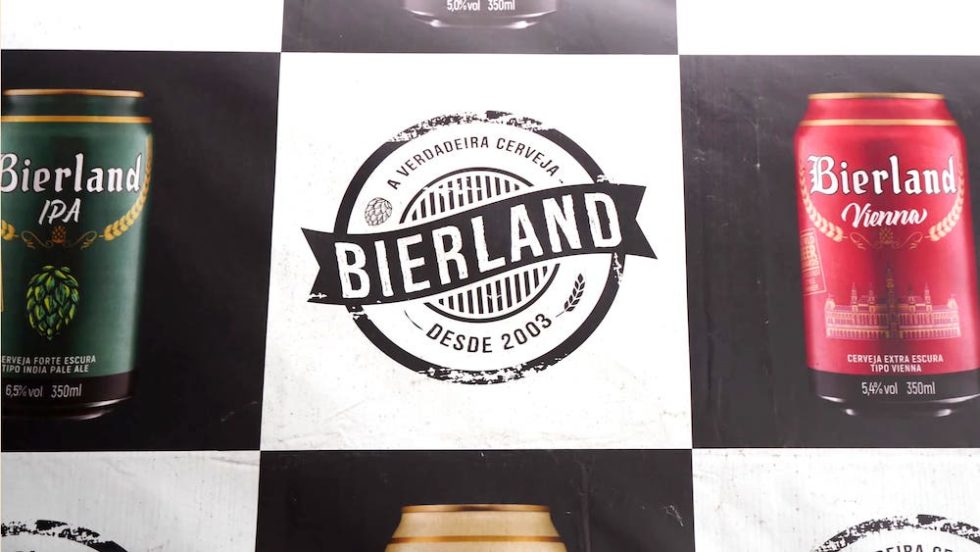 Our time in Blumenau began at Bierland, a local microbrewery about 25 minutes outside of town. They don’t allow visitation to their actual brewery, but they do have a convenience store that we could visit. They offer many different types of beer, from IPAs to stouts to Pilsens. 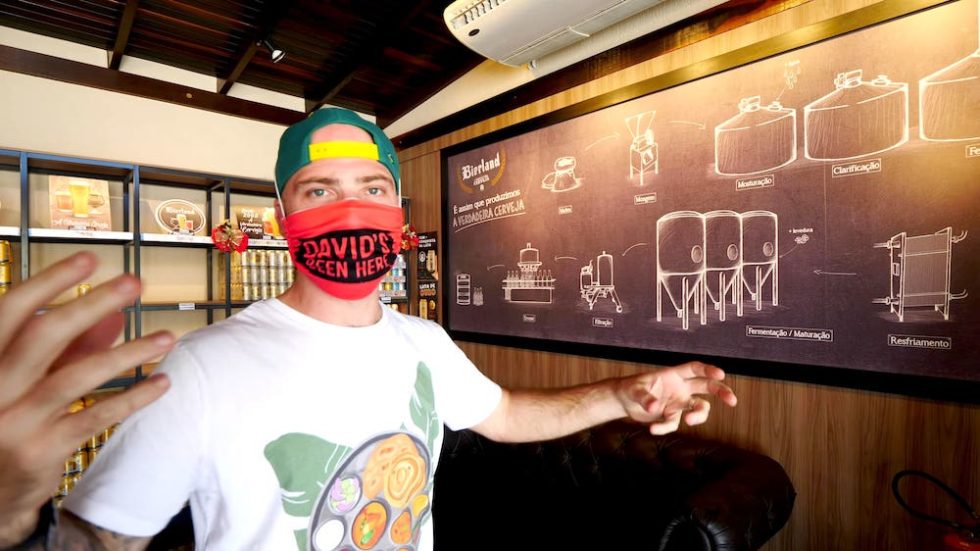 Inside, they have a display on the walls that shows the beer-making process. You can also see all the beers they have for sale, as well as their merchandise, which includes glasses, growlers, and canned beers. I got a stout and a Pilsen and bought two glasses for R$ 36.07, or roughly $7 USD. 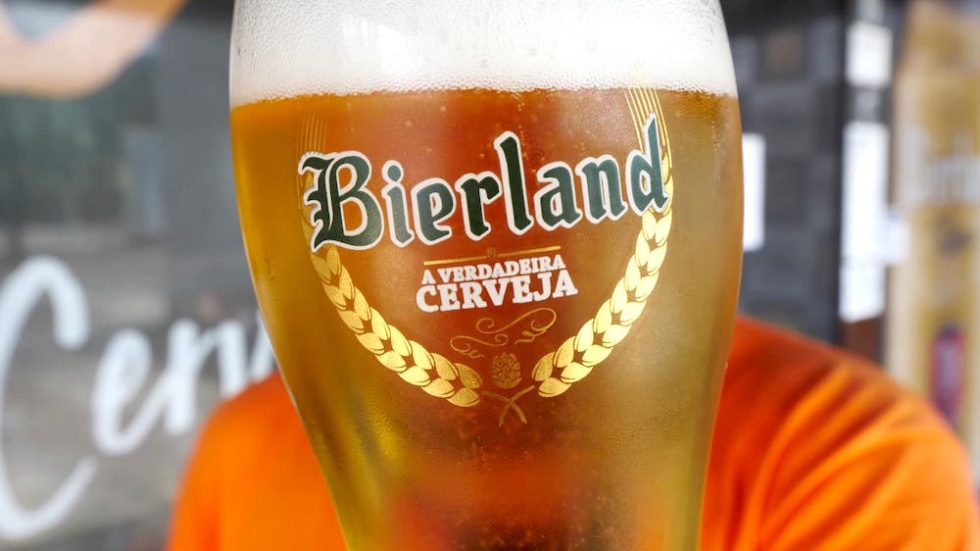 Outside, I tried the 5% Pilsen, which was crisp and light and bitter. Next was the 5.2% stout, which was light and refreshing, but had a very espresso/chocolate flavor. It was a little milky and had some notes of oats as well.

Then, we hopped in the car to drive along the backroads to the city. It’s a winding road through the hills and took us past lots of old, German-style houses. I hadn’t even seen houses like this in Germany! 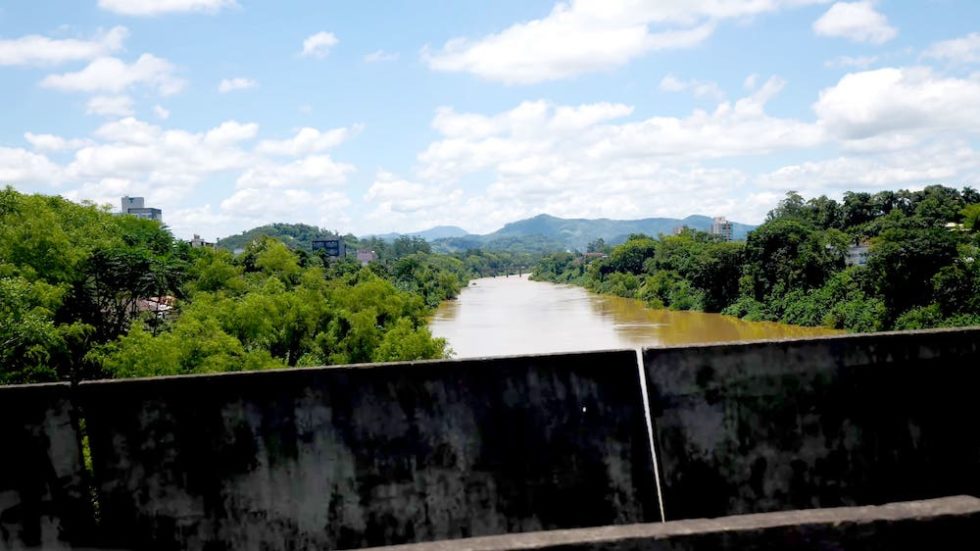 The weather was super hot and tropical, as opposed to the rainy and chilly weather in Curitiba. As we drove, I noticed that every local looked very blonde and European! 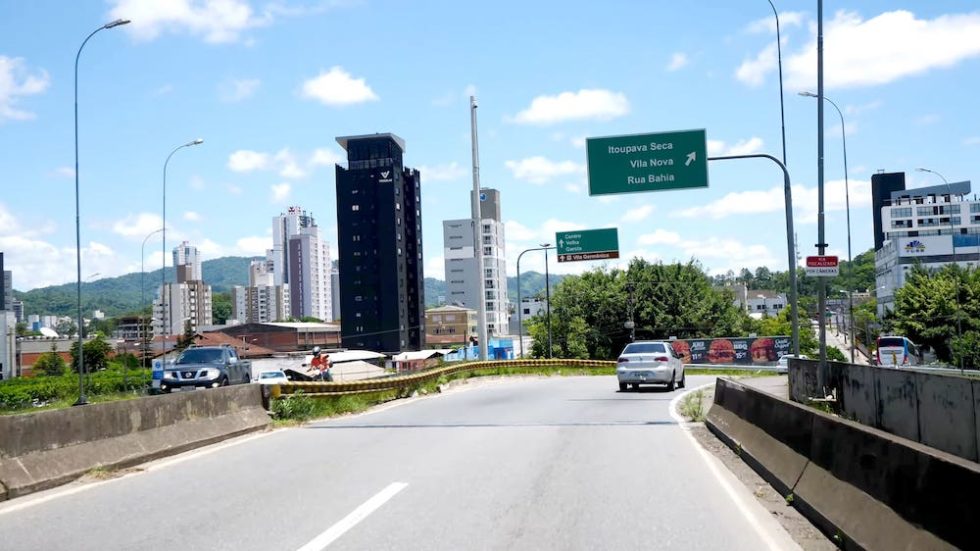 We stopped at a German restaurant and beer garden named Senac Blumengarten. It’s in a large, traditional German-style building that looks like something straight out of Bavaria. They have a buffet lunch and a la carte items, and the building used to be a hospital 90 years ago! They also have a nice, outdoor terrace. 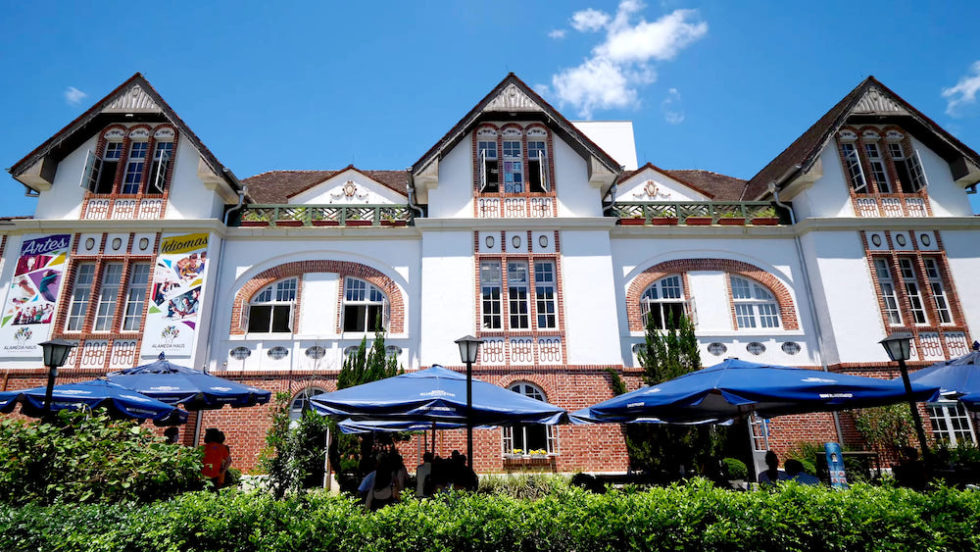 There, we met Bruno, who took us back to their draft beer area, where I tried some beer. I started with a Capybara IPA, which was hoppy, super tasty, and not too bitter. Then, I tried their Vila Weissbier, which is a real, traditional German-style beer! It was cloudy and creamy. It was like I was back in Germany! 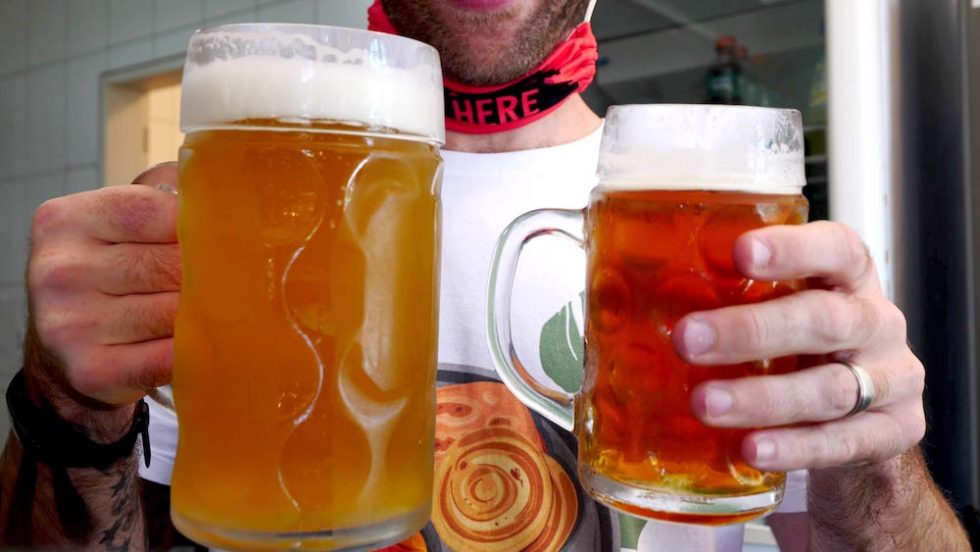 Then, in the kitchen, we watched the cooks fry up lots of German dishes, including sauerkraut, white sausages, red sausages, pork leg, pork cutlets, mashed potatoes, a creamy mushroom gravy, and more. The aroma was outstanding! 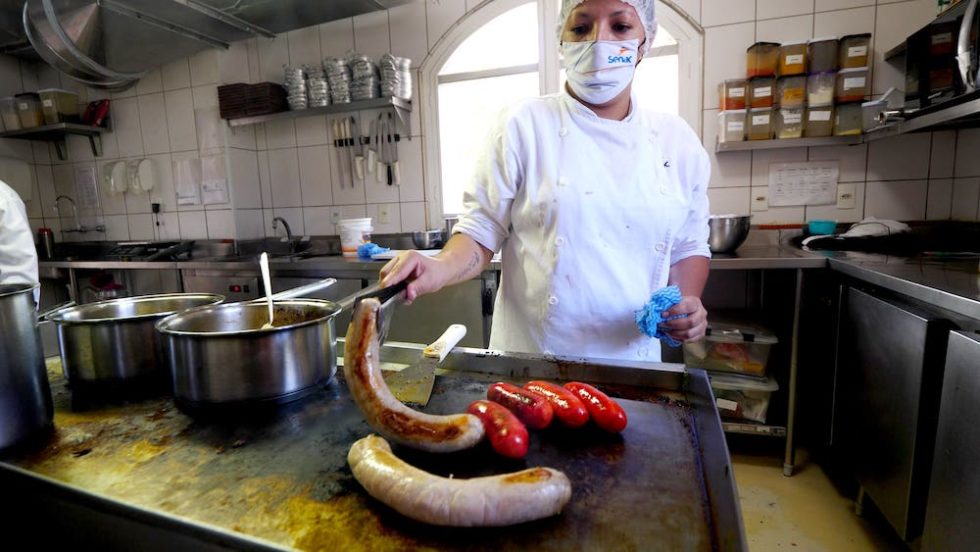 Outside, we had our Brazilian German food in Blumenau, Brazil. We had sausage, German pasta, schnitzel with creamy mushroom gravy, fried pork leg, mashed potatoes, sauerkraut, and more. I couldn’t wait to dig in!

The sauerkraut was amazing, and the traditional white sausage was very juicy and smoky. I loved it with the sauerkraut. The schnitzel was sweet and the mushroom gravy was outstanding! It’s some of the best German food I’ve ever had, and it all paired extremely well with my liter mug of beer! 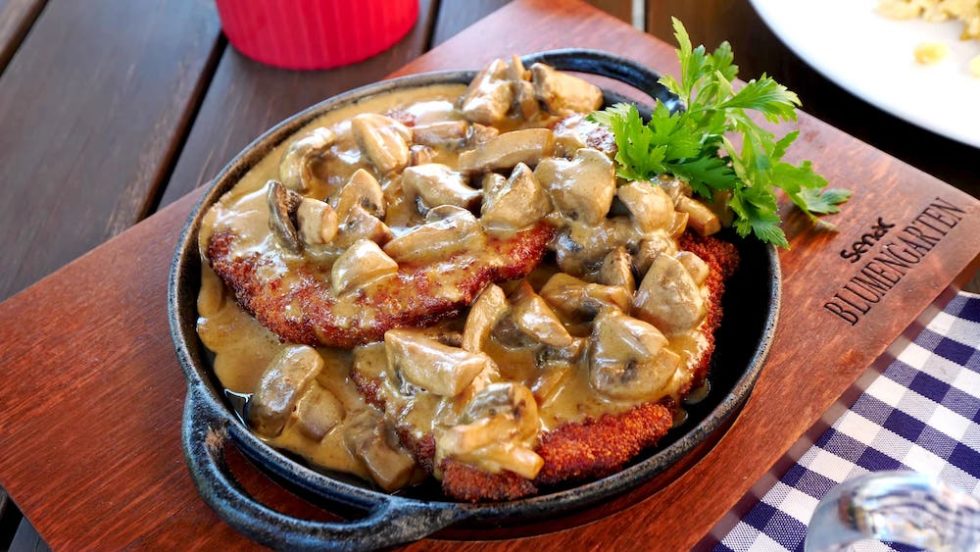 The pasta was grainy and super tasty with the mushroom sauce on it. My favorite thing about the sausage is that it was fresh and wasn’t industrial at all. The fried pork leg was crispy and fatty, with lots of juice inside. It was like a mix of chicharron and amazing meat! I love how heavy and meat-rich German cuisine is. 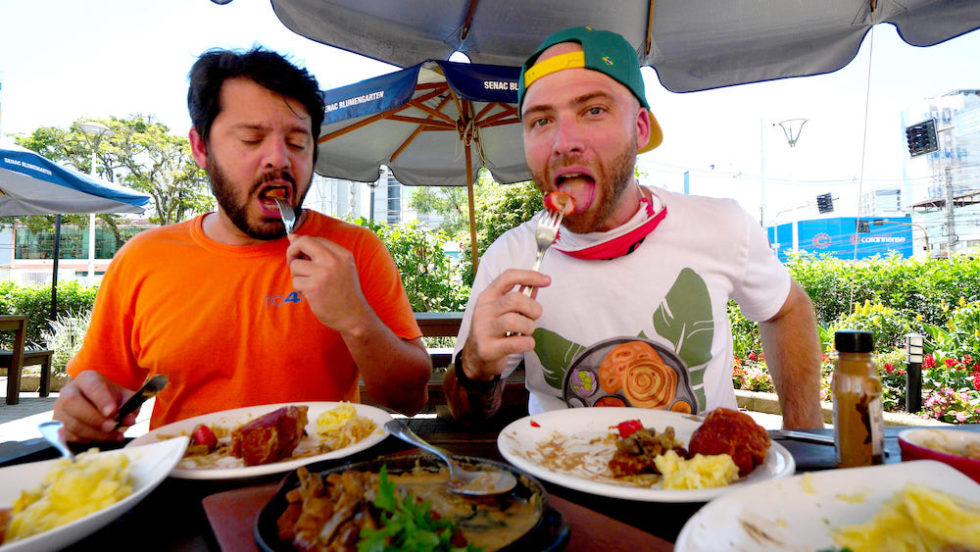 From there, we headed to the Germanic villa, a sort of plaza where they hold the only Oktoberfest in Brazil. We passed through the forest-covered mountains to get to the other side of the city. I love exploring other cultures within a new country! It’s the best. 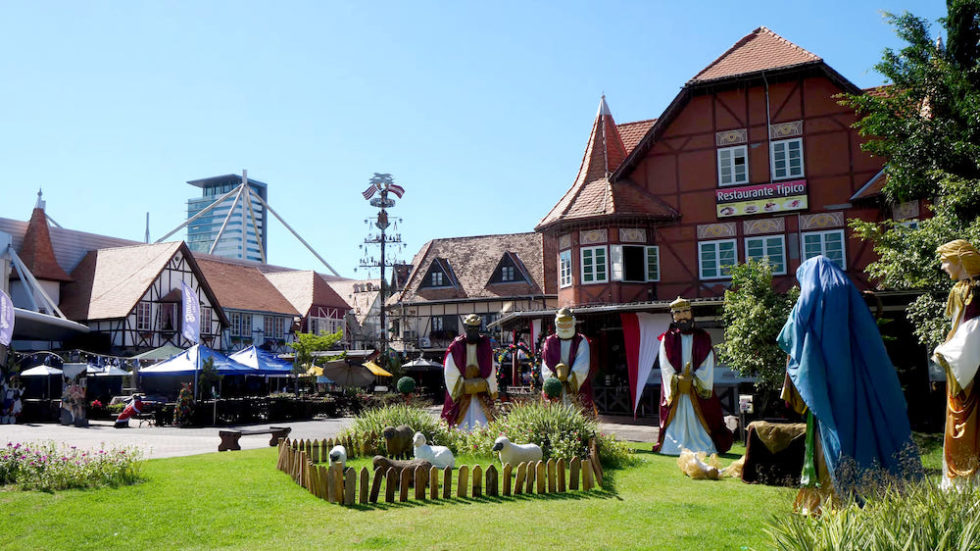 This area is the main German center of town. They had lots of Christmas decorations on the fairgrounds when I visited. It reminded me of old-town Frankfurt because of the restaurants, cafés, architecture, and beer garden! I’d seen this type of architecture in Bavarian cities like Munich and Nuremberg. 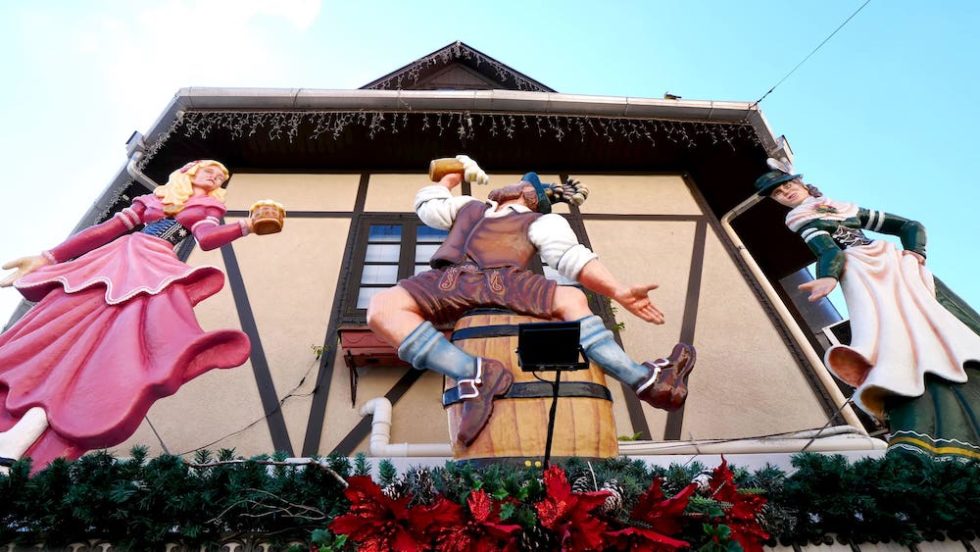 I also visited a souvenir shop where they sell lots of Oktoberfest-related merch from hats to glasses to clocks! I bought a glass and three T-shirts. 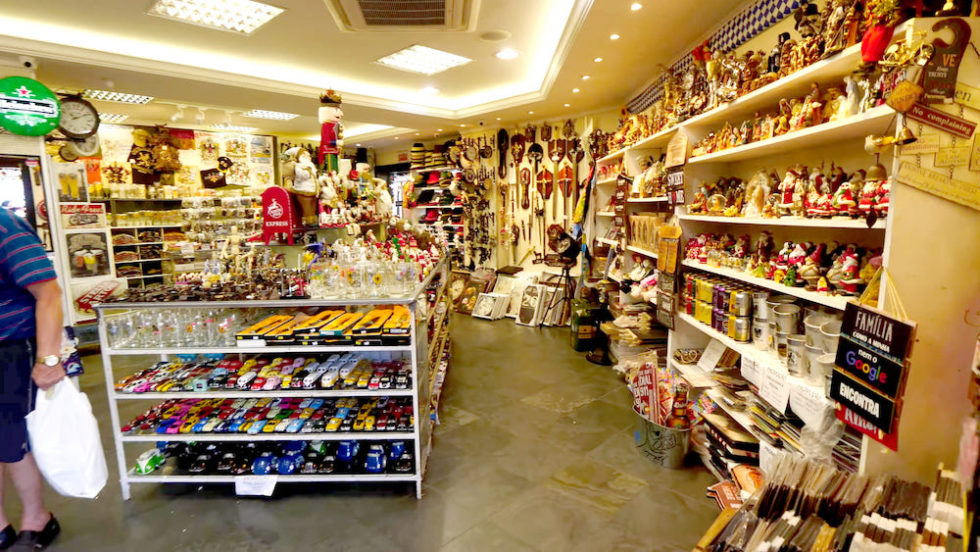 Then, we headed to another brewery called Alles Blau Bierkneipe 15 minutes away. Inside is a bar area where you can eat and drink. I met Diogo, who showed us around the facility. We saw their bottles and bottling system, their beer-aging barrels, and their storage room full of bags of malt. 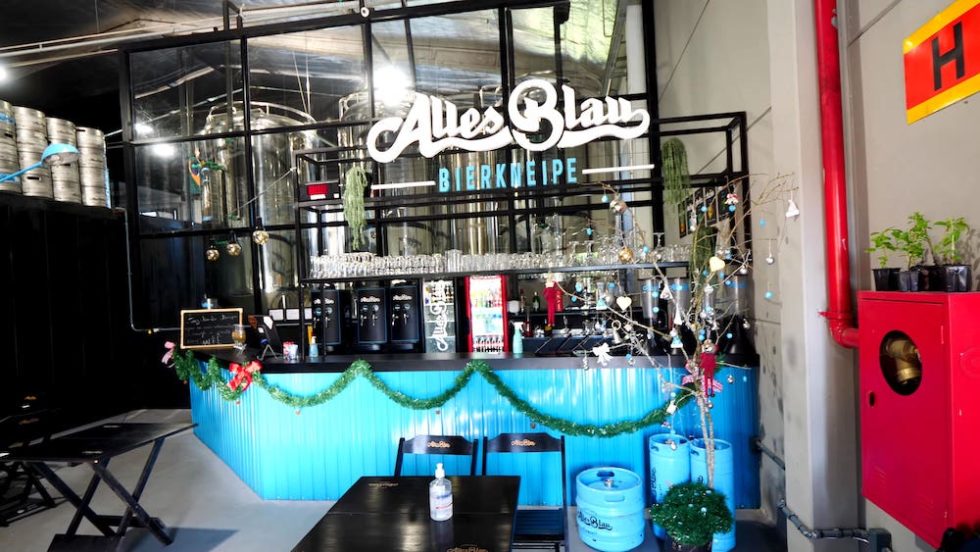 They let me try some beers straight from the fermentation tanks. The session IPA was light and crisp, and their sour was fruity with lots of passionfruit flavor! Then, we visited the refrigerator where they store their kegs. 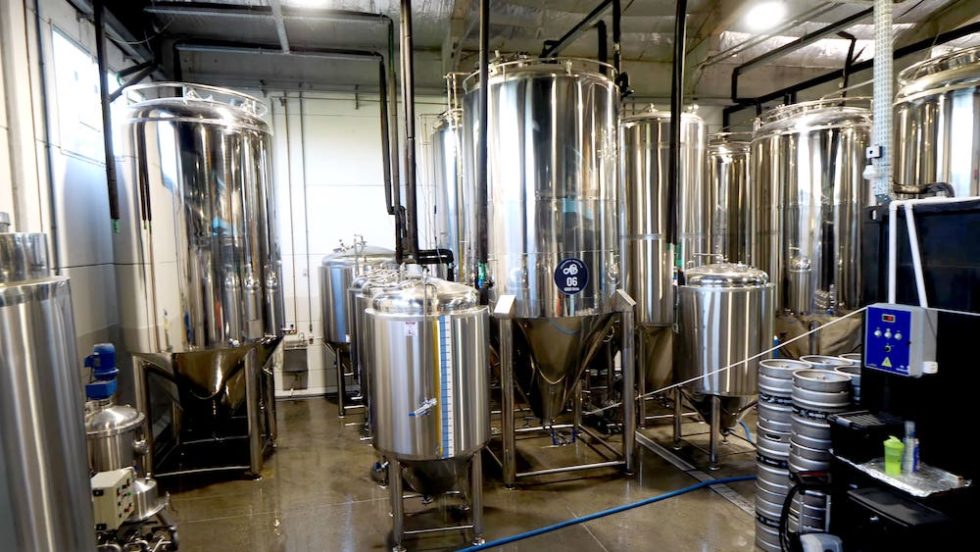 I finished up by trying their brand new IPA, which was light on the bitterness, a little cloudy, and had a very nice head. I loved it! 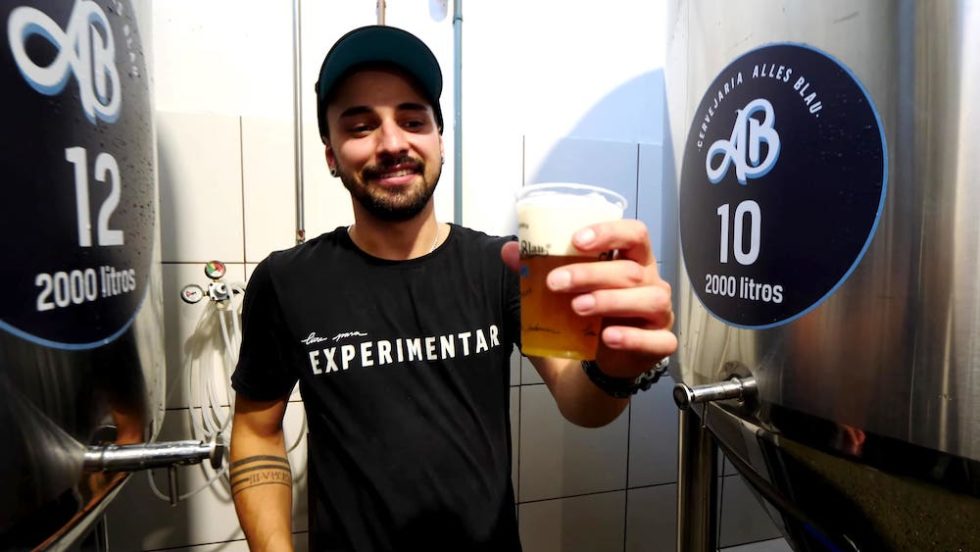 What an incredible Brazilian German food and beer adventure in Blumenau, Brazil! Huge thanks to Rio4Fun and Rio4Food for taking me there, and to my friends at Intercity Hotels for making this trip possible. 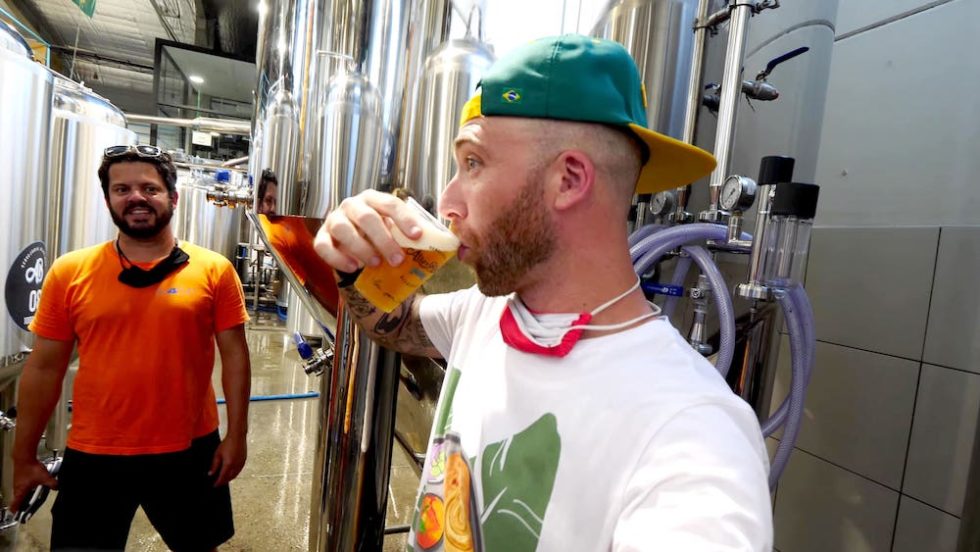 I hope you liked coming with me on my Brazilian German food and beer experience in Blumenau, Brazil. If you did, please give this video a thumbs up and leave a comment below. Also, please subscribe to my YouTube channel and click the notification bell so you don’t miss any of my travel/food adventures around the world!