With my last few hours in Curitiba, Brazil upon me, I set out on one last local food adventure before setting my sights on Blumenau in the morning! Some along with me as I go on a nighttime South Brazilian street food tour and try everything from pasteles to an amazing hot dog!

My afternoon began at 4 Beans, an awesome local coffee shop, with my friends Guilherme and Rafa of Rio4Fun and Rio4Food. Later, we’d hit up a local pastel joint, a food truck, and a bar! 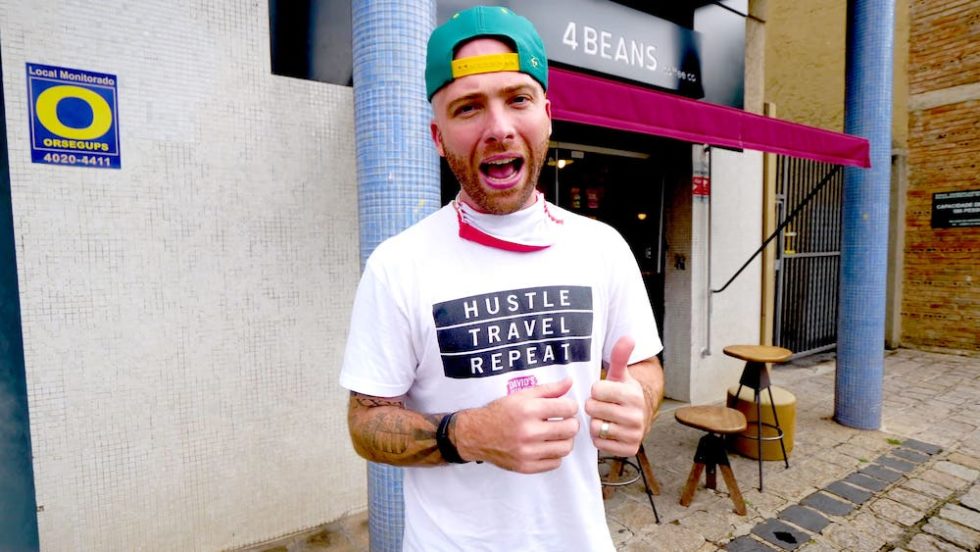 There’s nothing quite like Brazilian coffee. It’s some of the tastiest, aromatic, and highest quality around, and there are tons of different varieties. 4 Beans makes the best Brazilian coffee in Curitiba! They roast all of their beans in-house, which means they’re super fresh! 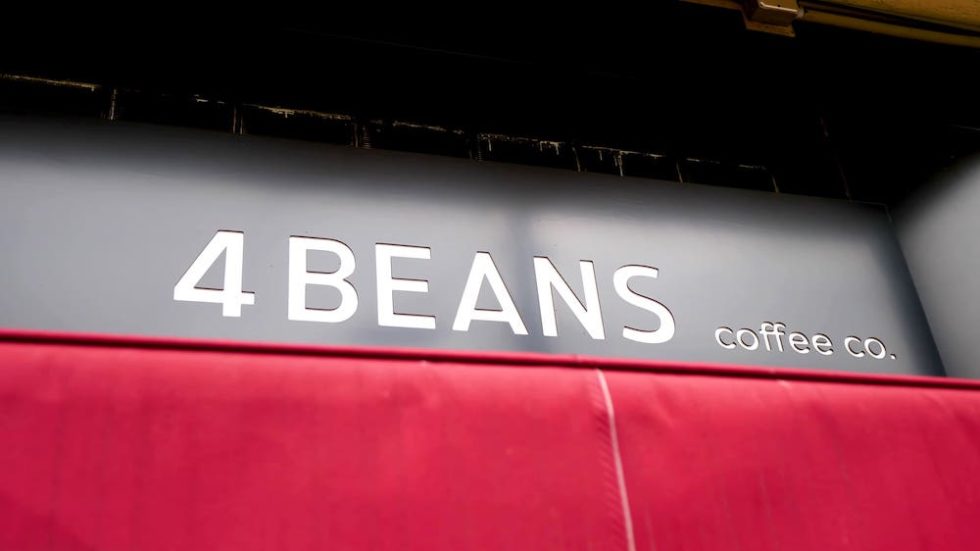 There, I met Otavio, who showed me how they brew their coffee. It comes in a satchel or a drip coffee bag that’s almost like a big teabag. They open it up inside your cup and then pour the hot water inside to brew your coffee. I wanted an espresso, but they sell many varieties. 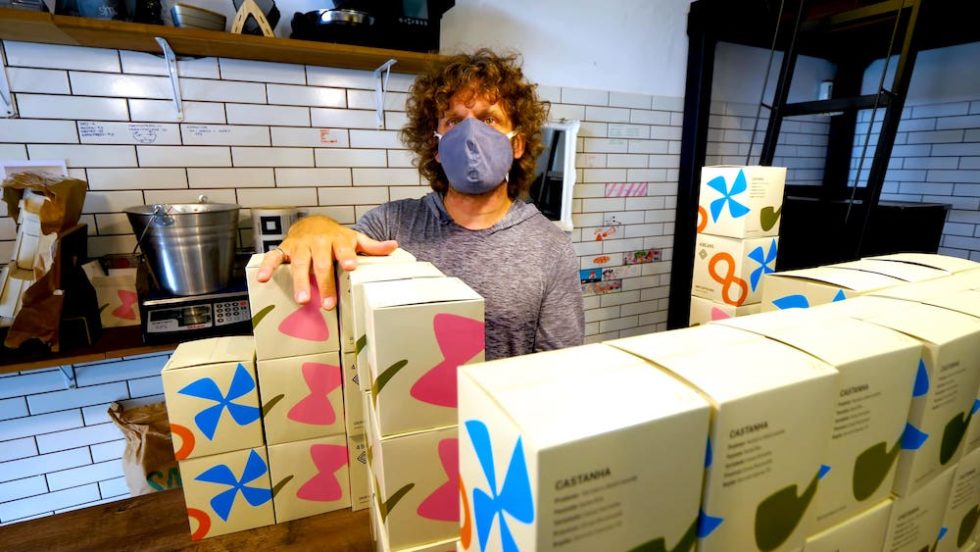 I tried some of the coffee, which was piping hot. Before they brew the coffee, they weigh it, which is what pro coffee brewers do. 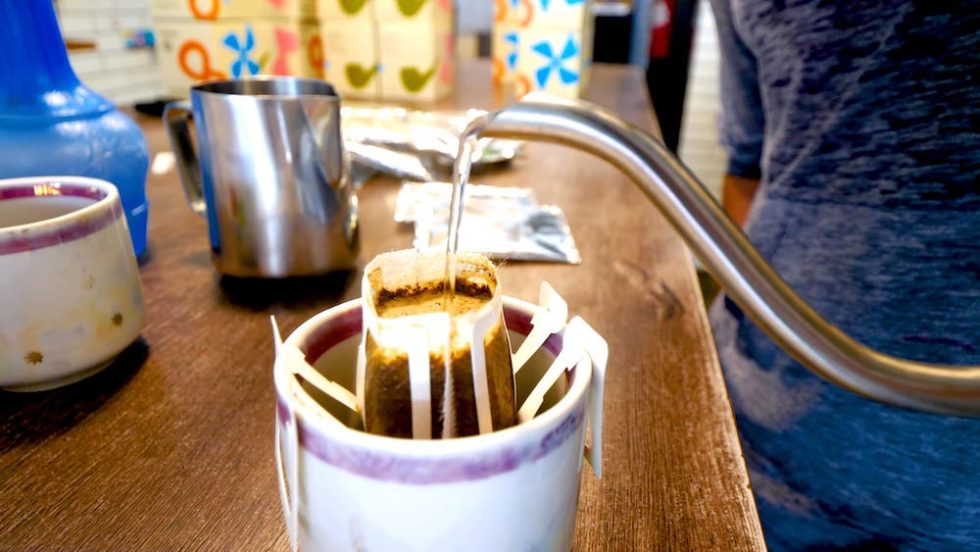 Next, I tried some jasmine bean coffee from north Rio de Janeiro. It was strong and black but very floral and fragrant, with a slight bitterness. Then Rafa and I tried a unique and bitter one from Bahia. It had a different taste that didn’t linger. I bought a bag of some ground jasmine bean coffee to take home with me.

Then, they roasted some green coffee and regular coffee beans. It smelled amazing! The coffee at 4 Beans is some of the best I’ve had in my life! 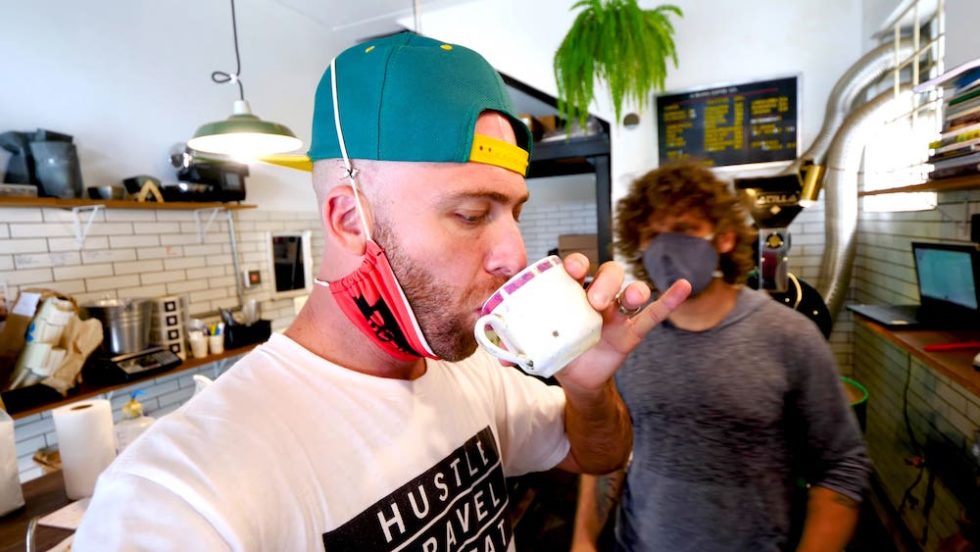 Then, we hopped back in the car to go get some pasteles at Juvevê Bar Restaurante e Pastelaria, which has been around for 40 years. It’s like a big empanada. The place we were heading to has over 150 types! 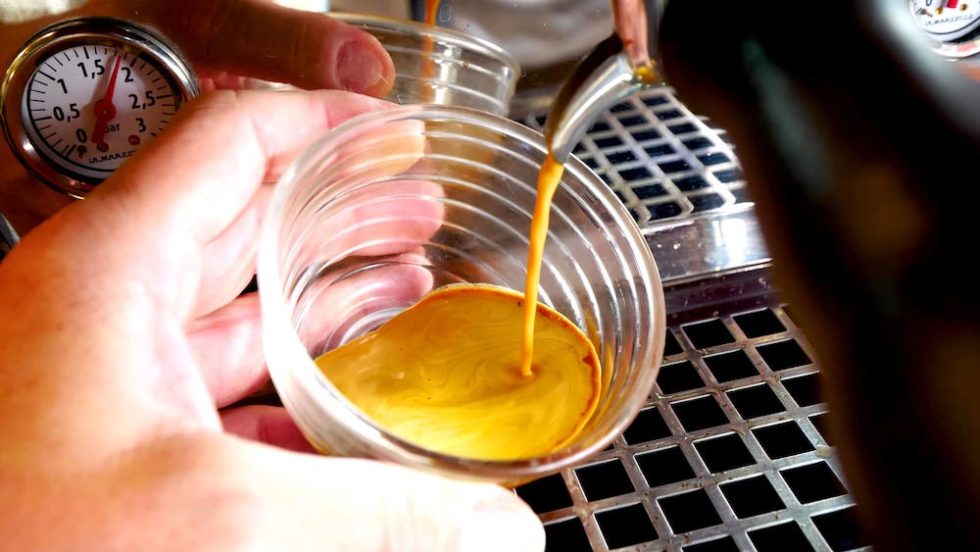 It was rainy again—Curitiba’s weather ranges drastically. According to Guilherme, you can experience all four seasons in one day! Earlier in the day, it was wet and cold. By the middle of the day, it was warm and sunny, and now it was back to wet! 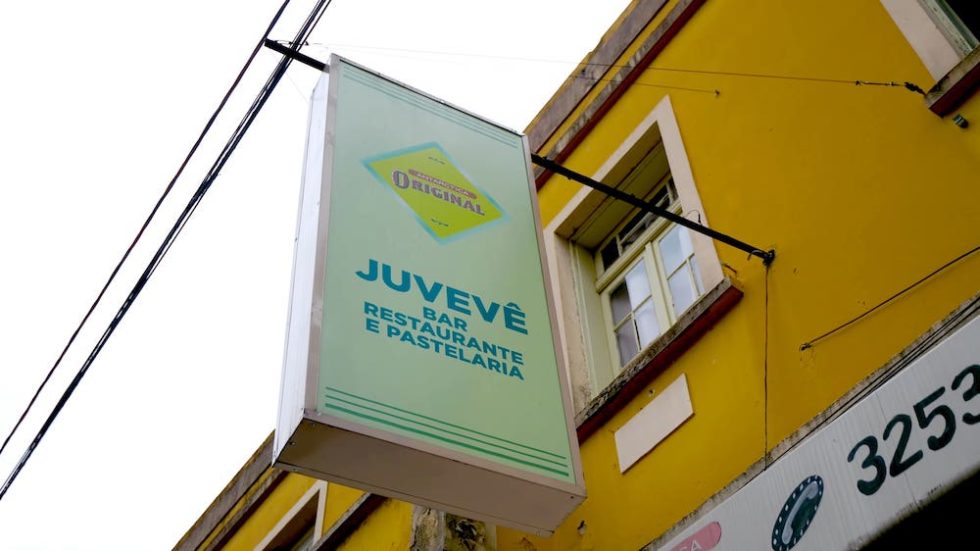 At the restaurant, they have a massive menu on the walls showing all 150+ pasteles they offer. I was hungry and super excited to try one of them! 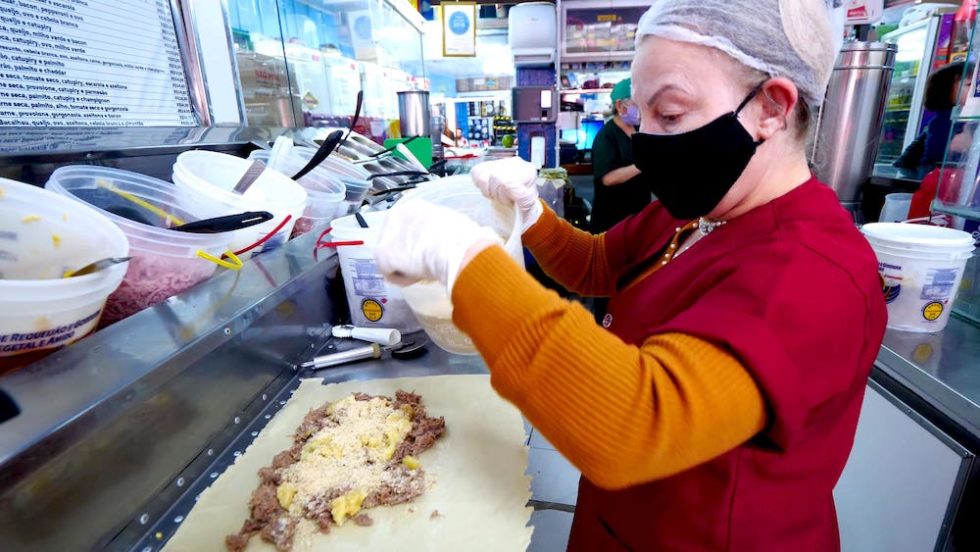 I watched the women in the kitchen prepare three different pasteles. They’re made exactly like a huge empanada, and they cook them really quickly. They fill the dough with lots of ingredients and then deep fry it. 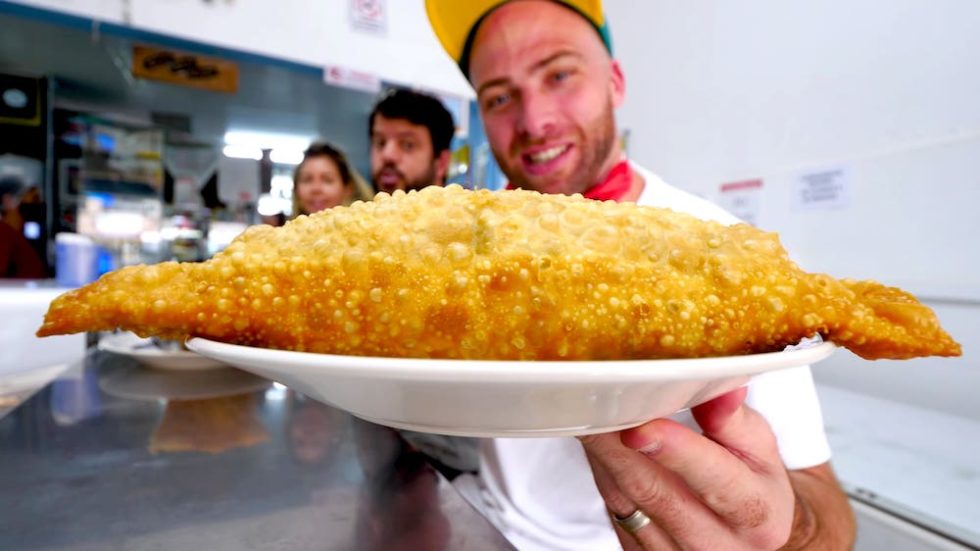 The one I tried is from a town called Morretes near Curitiba and is filled with shredded meat, banana, and manioc flour. It was a beast! I loved how crunchy and oily it was. All of the filling sinks to the bottom. It was savory and sweet, but also salty. The manioc flour added a dry but appetizing texture.

I added some chili sauce, which added a nice, sweet and sour spicy kick. The mix of sweet, salty, savory, and spicy was an amazing combination that I couldn’t get enough of. It was the best pastel I’ve ever eaten, but it was too big for me to finish! It cost R$ 24 or just under $5 USD. 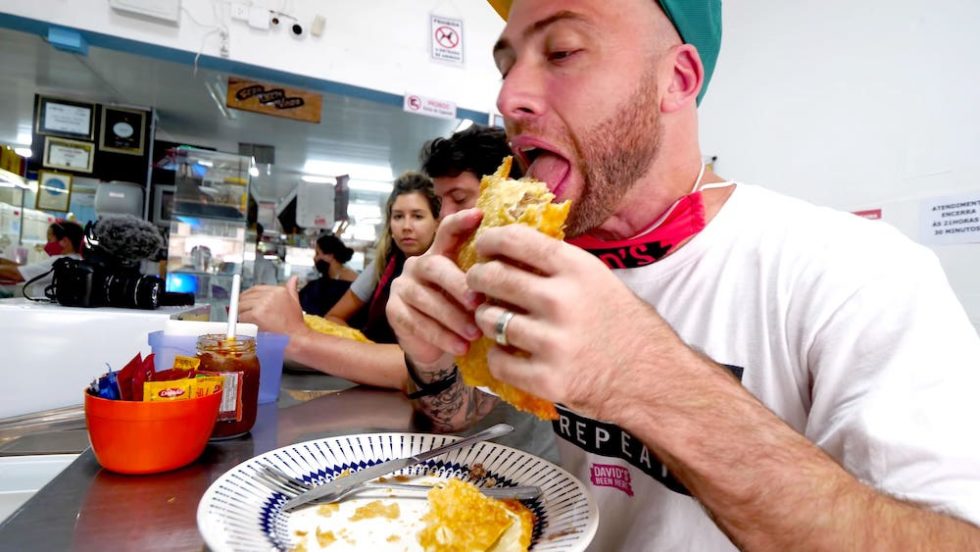 Then, we continued our south Brazilian street food tour of Curitiba, Brazil at a famous local bar called Casa Velha. It’s located in a building that looks like an old house! Inside, it’s a nice, rustic, authentic sports bar. They have lots of different types of beer. 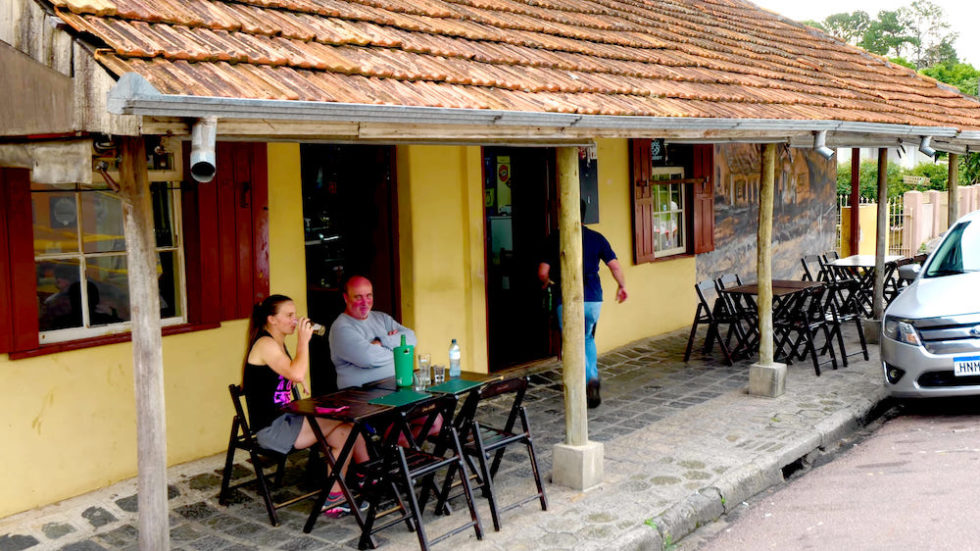 I got a Buddy Brewery American Pale Ale. It was a draft beer, which is always better. The beer contained 6.5% alcohol and was hoppy, crisp, light, and not cloudy. It was very sessionable and tasty! Then, I tried a dark, malty beer called Petra, which was like a sweet mix between a porter and a stout. It would have gone well with a fried pork cutlet! 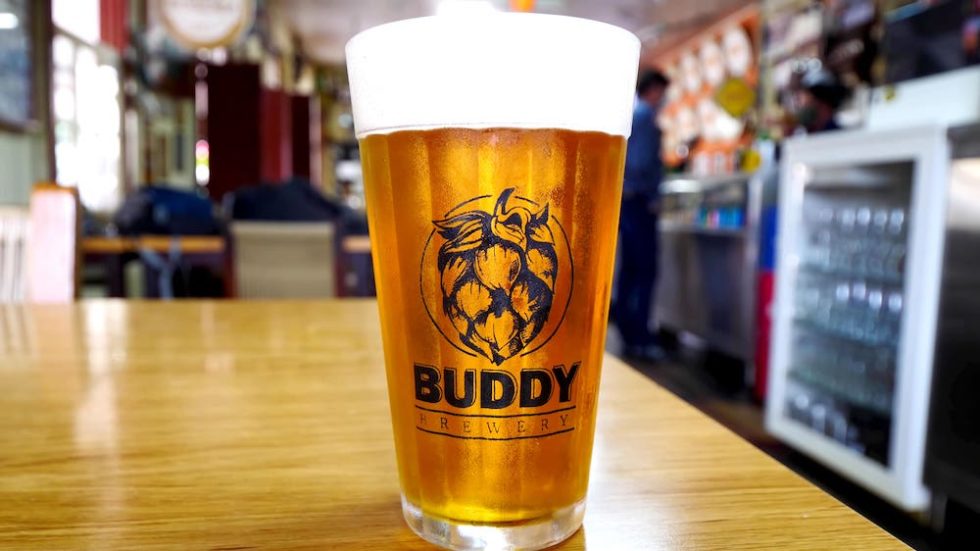 Then, we got some croquetas called bolinhos. They’re made with fried ground beef and cheese and came with mustard and a spicy sauce. The cheese inside was gooey and like lava! They’re super addicting and pair nicely with the beer. 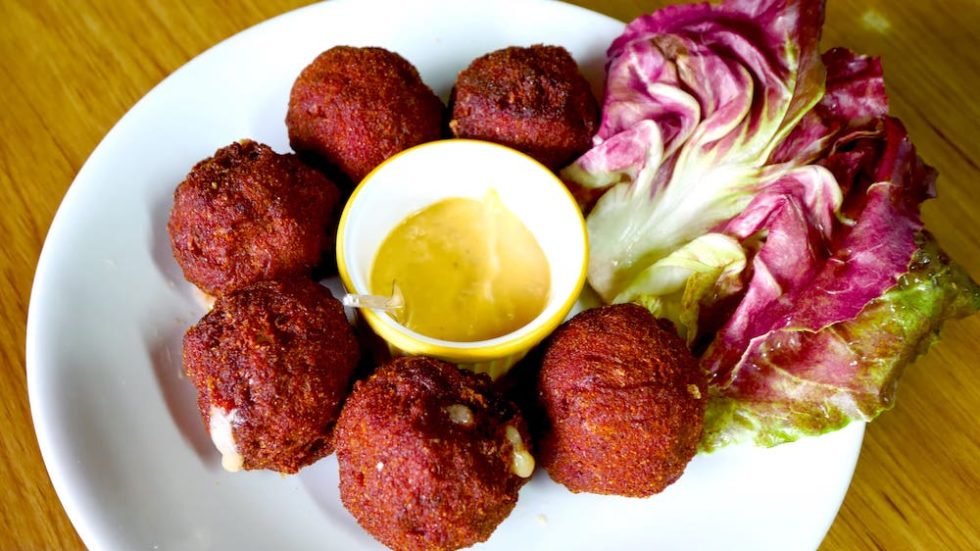 Next, we went to get a hot dog! They’re extremely popular in Brazil. I don’t usually love hot dogs, but they’re a big part of the culture here. We arrived at Gringo Dog Colombia, one of the most famous hot dog spots in Curitiba. Hot dogs in Curitiba are called vinha and come with a bun, tomatoes, onions, French fries, and yuca flour.

The hot dogs come toasted and squeezed together. We had a spicy pineapple sauce and another with tomatoes and chilies. The second sauce was like salsa. It was good and crispy, and I loved the sweetness of the pineapple sauce. It was a great way to end our south Brazilian street food tour! 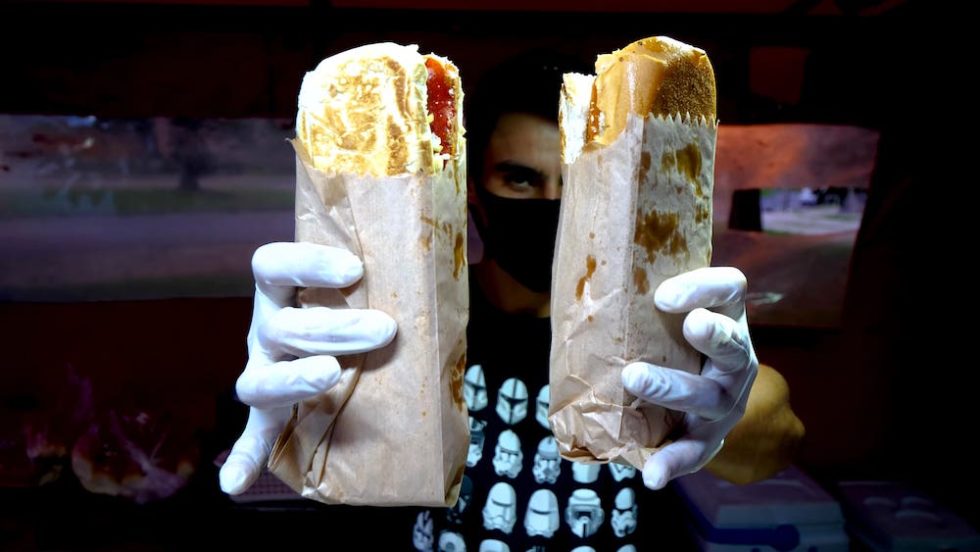 I have to send a massive thank you to Guilherme and Rafa for graciously taking me on this south Brazilian street food tour of Curitiba, Brazil. Be sure to check out their YouTube and Instagram for more incredible Brazilian food content! And I can’t forget to shoutout my friends at the Intercity Curitiba Batel hotel for hosting us. This adventure wouldn’t have been possible without them! 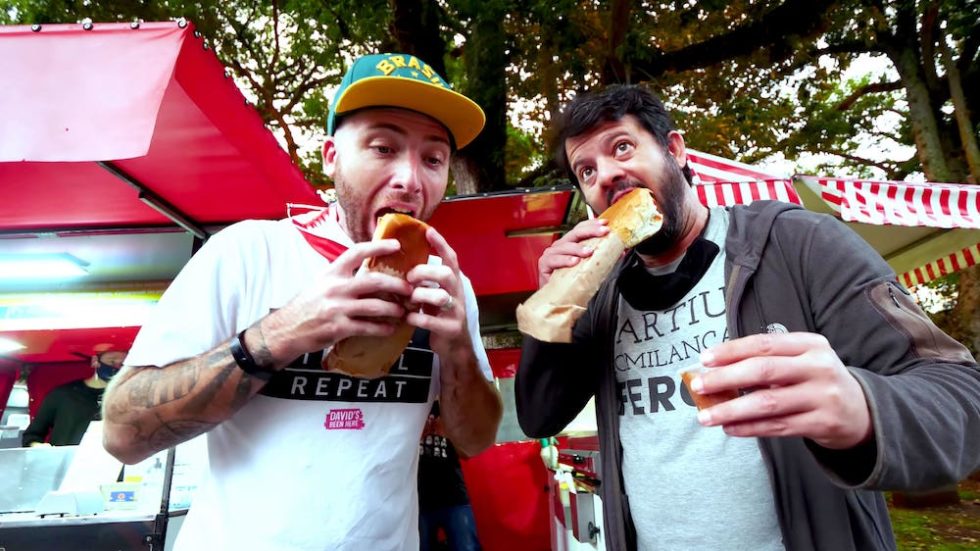 I hope you liked coming with me on my south Brazilian street food tour in Curitiba, Brazil! If you did please give this video a thumbs up and leave a comment below. Also, please subscribe to my YouTube channel and click the notification bell so you don’t miss any of my travel/food adventures around the world!