After arriving in Rio de Janeiro early in the morning, I continued my adventure through Brazil with some incredible food! Join me as I try some delicious Brazilian food at a 117-year-old restaurant in Rio de Janeiro before I check out some of the most popular attractions in Brazil!

My friends Guilherme and Rafa from Rio4Fun and Rio4Food started our afternoon at Restaurante Nova Capela, one of the oldest restaurants in Rio de Janeiro. It dates back to 1903 and claims to have the best lamb in the city! 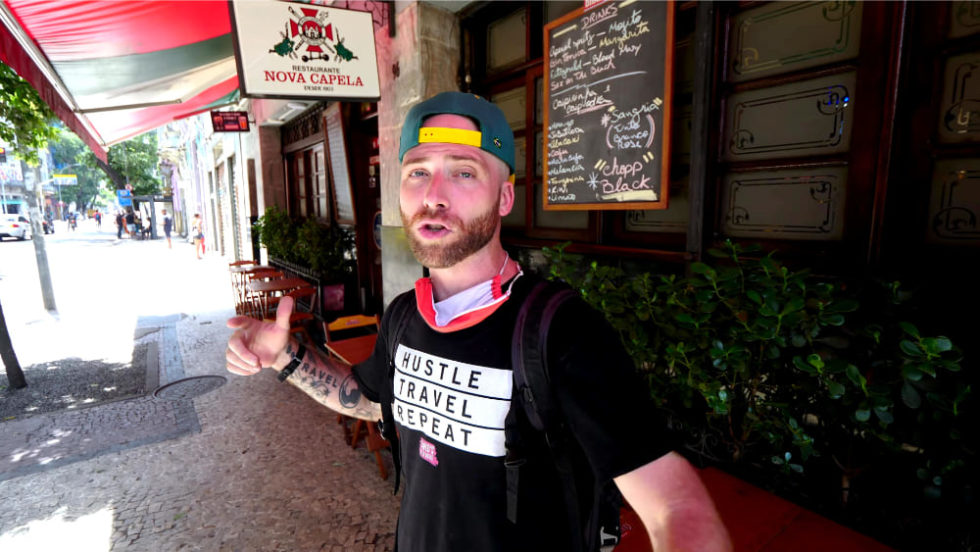 The restaurant is a traditional bar, similar to ones I’d visited in Portugal and Spain. In the kitchen, we watched them make some green spinach rice as they flipped it over the fire. I tried some Brahma Black, which is a Brazilian stout beer. It was like a good, light, dark lager with a creamy texture and a bit of espresso flavor! It was also kind of similar to a Guinness. 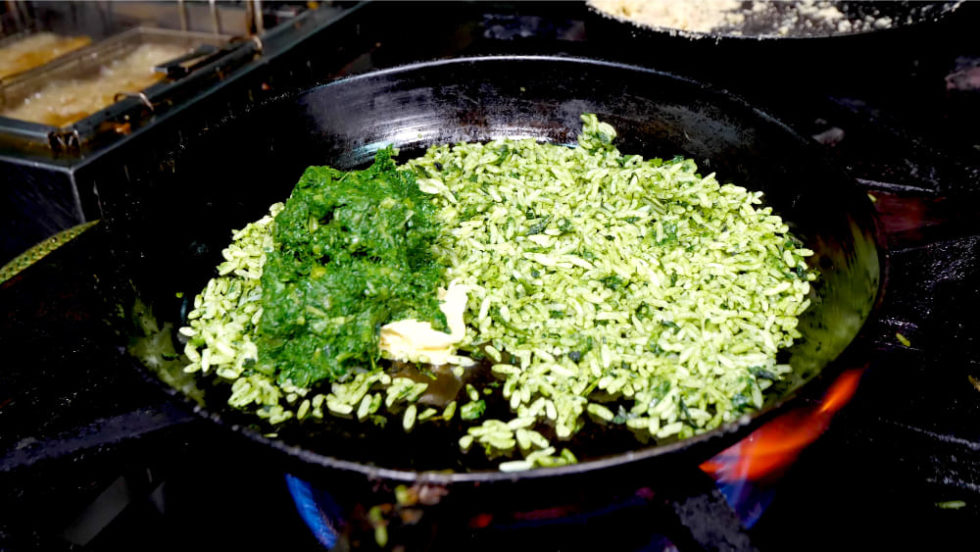 At our table, we had fried lamb, codfish fritters, broccoli rice with fried garlic, and fried potatoes. The bacalao fritter was crispy with lots of chunks of meaty fish and creamy potatoes inside. I loved it drizzled with olive oil! It was very similar to ones I’d had in Portugal and Spain. 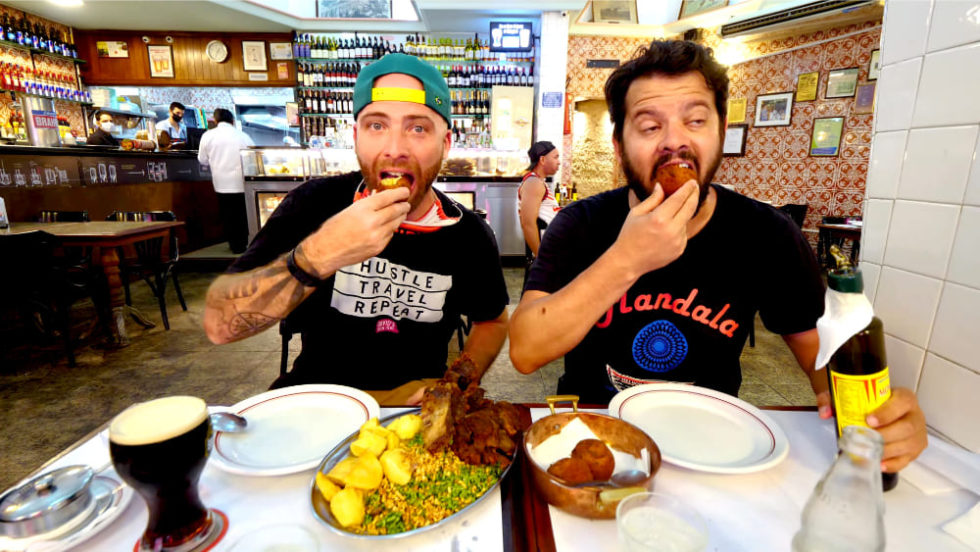 Then, we jumped on the massive chunk of lamb. It’s roasted for four hours and then deep-fried. Guilherme drizzled some olive oil over the broccoli rice, which was so tasty. The lamb was crispy on the outside but the meat melted in my mouth immediately.

Check out my VIDEO: Visiting Christ the Redeemer!! One of the New Seven Wonders of the World | Rio de Janeiro, Brazil

I also tried the lamb with a deceptively spicy chili sauce and some mint jelly, which was extremely minty. I preferred the chilies. What an outstanding meal! Our meal came to R$250, or about $50 USD in total. It was worth it! 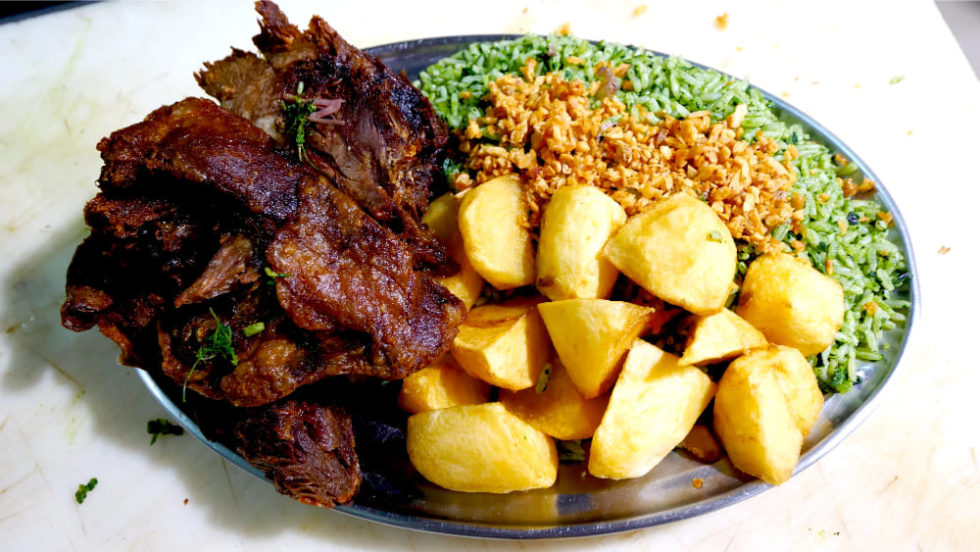 Next, we headed out to see the Carioca Aqueduct which used to stand along the Carioca River, which is no longer there. Then, we checked out a shop that sells alcohol that’s stacked up to the ceiling! They have lots of cachaça, vodka, and more! 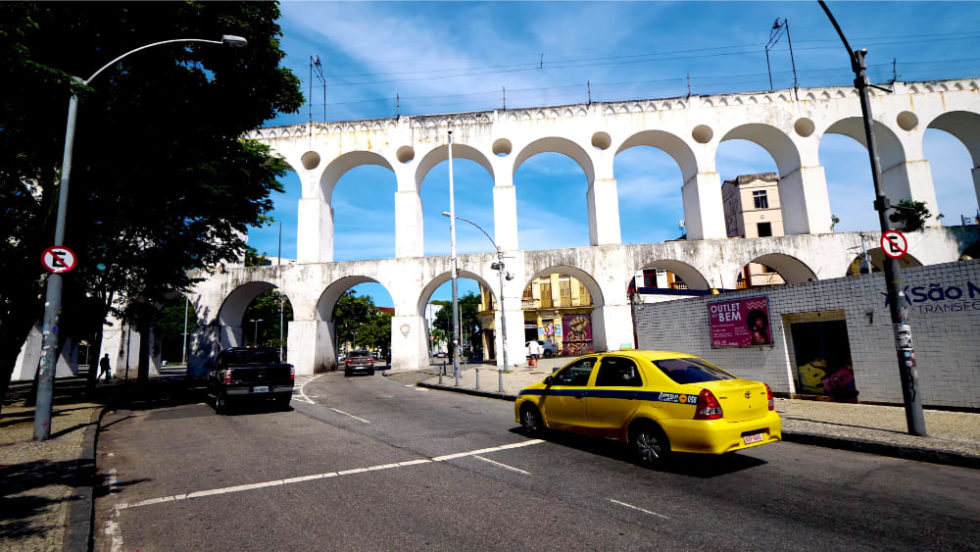 I tried some potent cachaça that burned on the way down! Then, I tried some straight from a barrel before we headed back out to explore the neighborhood. The neighborhood can be a bit unsafe, so I recommend exploring with a local and being very careful. Keep your valuables out of sight and try not to attract too much attention. 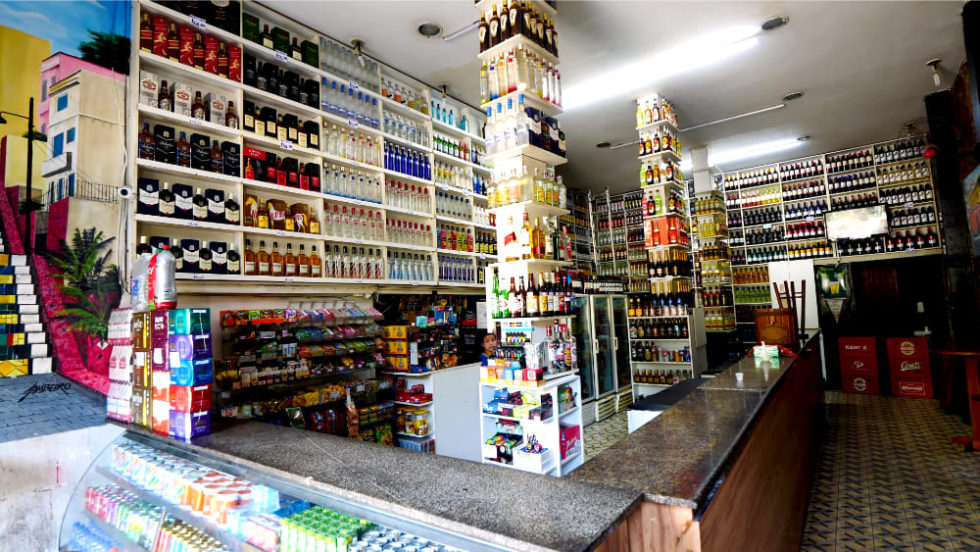 Next, we walked down an alley lined with graffiti, tags, and murals to reach Escadaria Selarón, which is a colorful outdoor staircase of mosaics made by a Chilean artist named Jorge Selarón. He began decorating the staircase in 1990 as a gift to the city before the upcoming World Cup in 1994. The yellow, blue, and green tiles represent the colors of the Brazilian flag. There are also lots of red tiles because red is the artist’s favorite color! 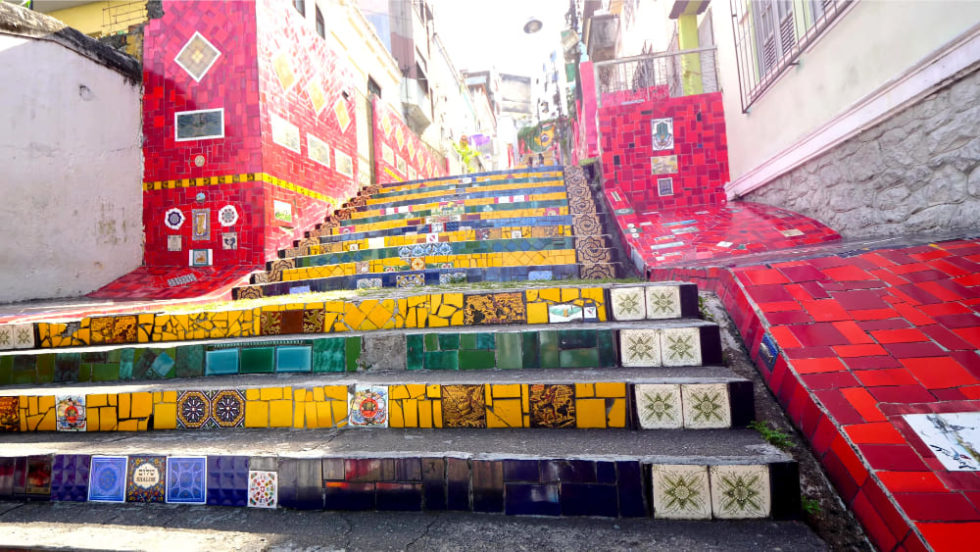 The staircase is made up of 2,000 tiles from 60 countries. There are tiles there depicting Hollywood, Coca Cola, the Michelin Man, and Hawaii. It’s the third-most visited attraction in Rio, and at the top is the Brazilian flag painted on a wall! The Incredible Hulk and the Snoop Dogg and Pharrell video “Beautiful” were shot there. It’s so unique!

At the steps, there are vendors selling a traditional sugarcane liquor that reminded me of a mojito without the mint. It was delicious but very strong! We also saw an artisan making wooden keepsakes! 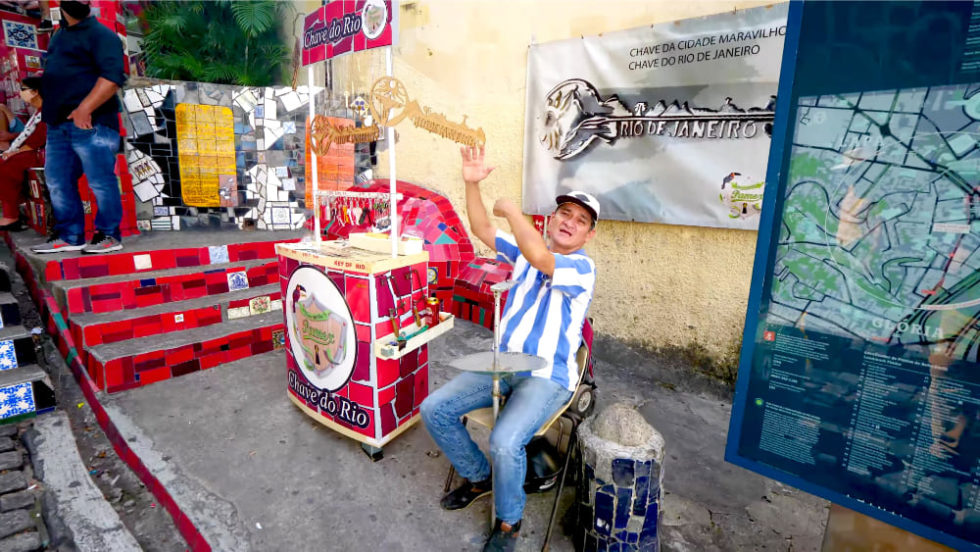 Then, we drove to the Jardim Botanico, where we got some dulce de leche churros from a street food vendor. I’ve had them in Madrid, where they dip them in hot chocolate. I’m not usually a huge sweets guy, but I can’t resist dulce de leche or churros! 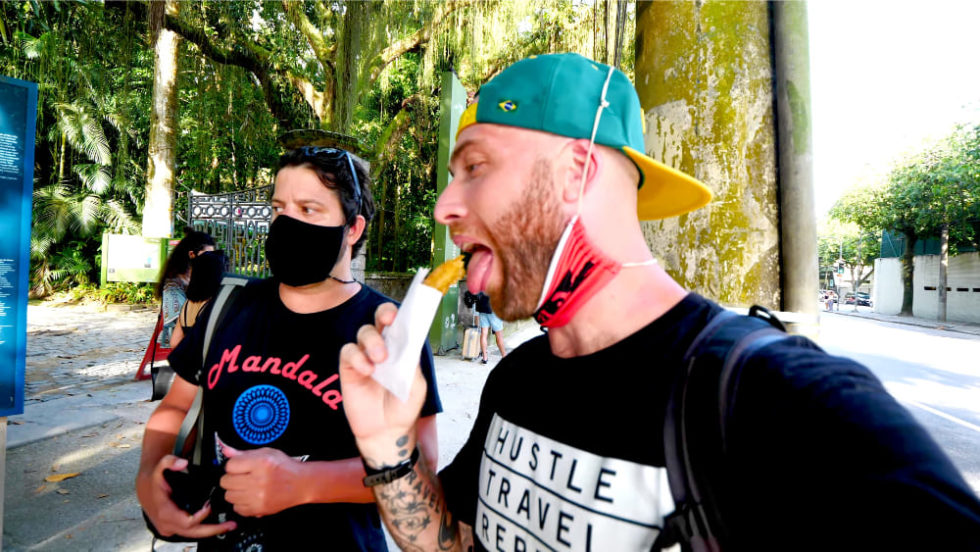 The imperial palm trees in the garden are over 200 years old. They were brought by the king of Portugal in 1808. They have an invasive species of marmoset there as well as jackfruit. 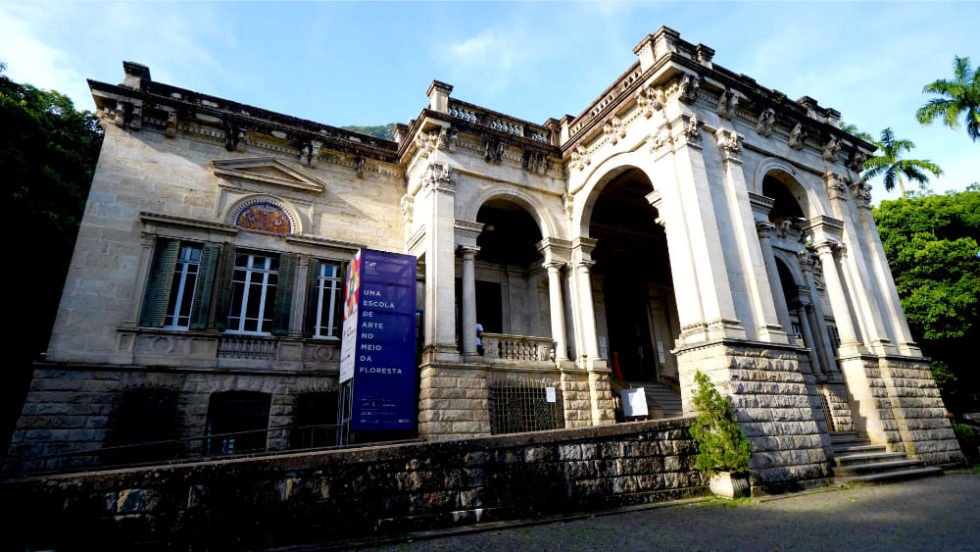 In the garden is a beautiful palace that is a very touristy bistro and Instagram spot with a swimming pool. It reminded me of Alhambra Palace in Grenada, Spain. I finished up with some Selecta cachaca and sparkling water with lime.

What an incredible afternoon of exploring Rio de Janeiro and some of the most popular attractions in Brazil! Huge thanks to Guilherme and Rafa for showing me around Rio, and to our friends at the Yoo2 Rio de Janeiro by Intercity for hosting us during our time in town! 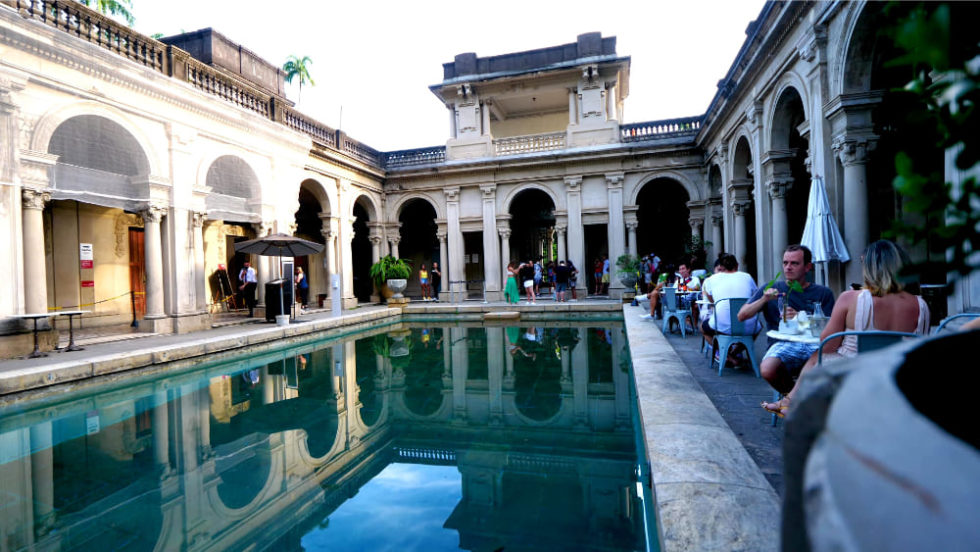 I hope you liked coming with us to check out the beautiful city of Rio de Janeiro, its food, and some of the top attractions in Brazil. If you did, please give this video a thumbs up and leave a comment below. Also, please subscribe to my YouTube channel and click the notification bell so you don’t miss any of my travel/food adventures around the world!