After spending two full days in Accra, Ghana, I made the drive to my next destination in the southern part of the country. Join me as I check out some extreme street food on my way to Cape Coast, Ghana!

My seven-day road trip around the country officially kicked off with me leaving OLMA Colonial Suites, where I’d stayed the past two nights. It’s located in the Osu neighborhood of Accra and offers 11 incredible suites! 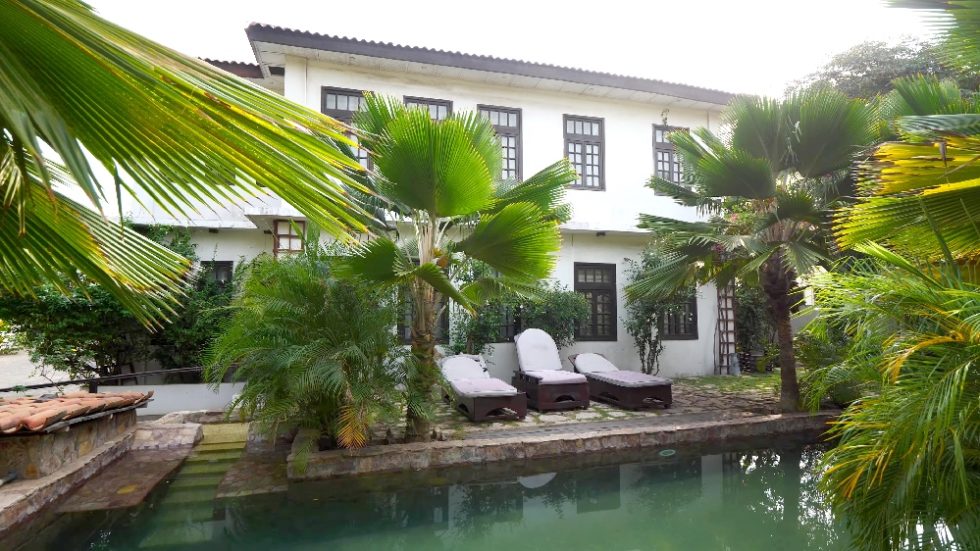 During the 4-hour drive to Cape Coast, I was planning on grabbing some food and seeing some attractions along the way. We were leaving super early so we’d get to Cape Coast by lunchtime, but there was tons of traffic as we were leaving the city. 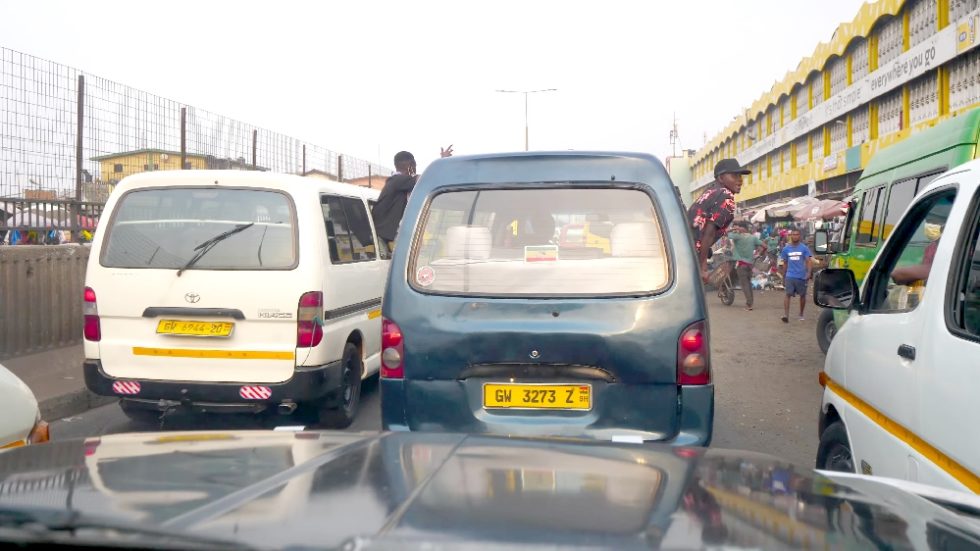 We met up with my guide Isaac from Jolinaiko Eco Tours at a market and continued making our way out of the city. It can take people 2-3 hours just to get into Accra! Ninety minutes later, we were still trying to leave the Accra area. There were so many traffic jams! 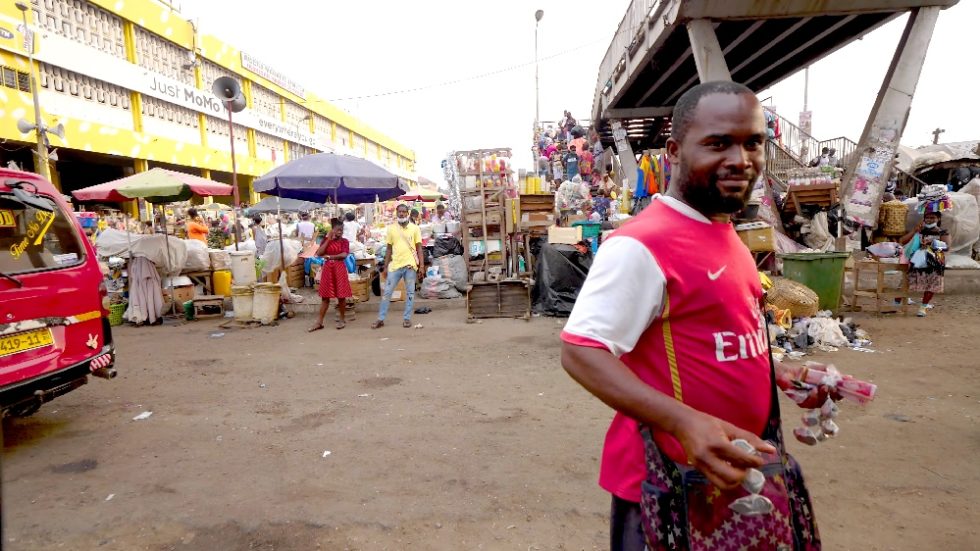 Once we hit the open road, we passed lots of lush greenery. It was similar to the landscapes I saw in Malawi. Once we were on the road for a while, we stopped at a workshop and store where they make unique coffins!

The coffins are made in very unique designs like chili peppers, cell phones, crabs, crocodiles, cobras, and even houses! They’re made specifically for people and symbolize people’s occupations. It’s the tradition in this part of the coast. 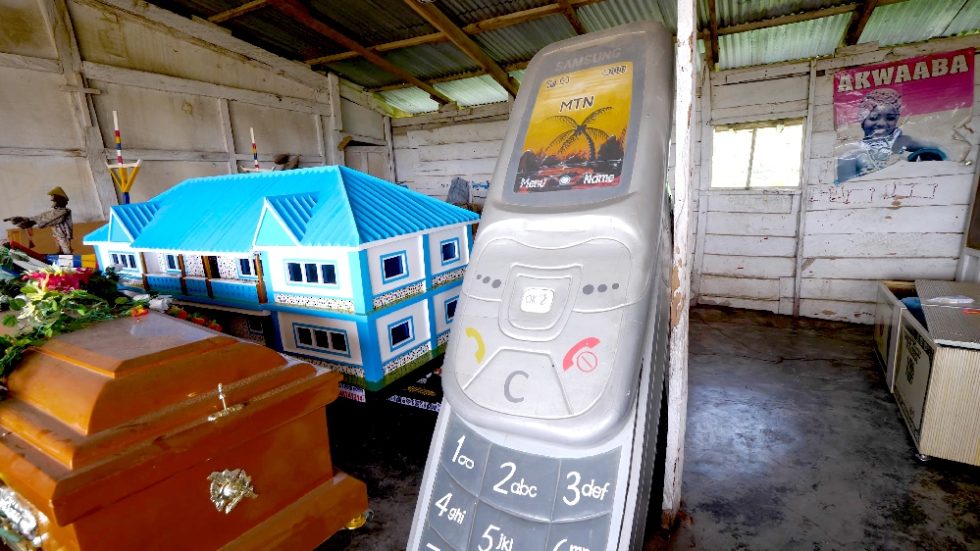 I also saw some beautiful and colorful caskets made for a royal family. They have an album you can look through to get an idea of the type of casket you want them to make for you. You can also ask for a custom coffin! It was so unique. I’ve never seen anything like it in my life! 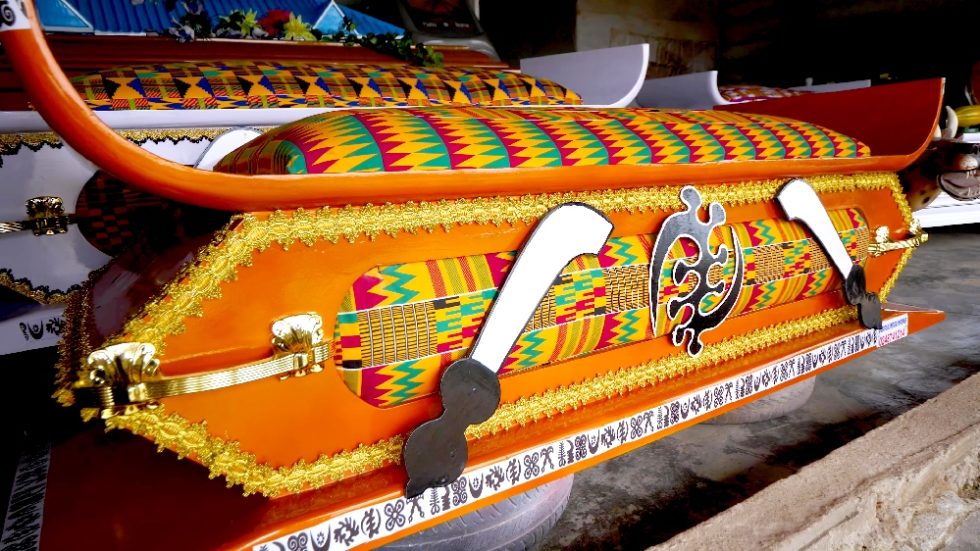 After that, we stopped at a roadside vendor selling egg sandwiches with cabbage and green peppers. It had been a few days since I’d had some coffee! I took mine straight, but you can add condensed milk and sugar. 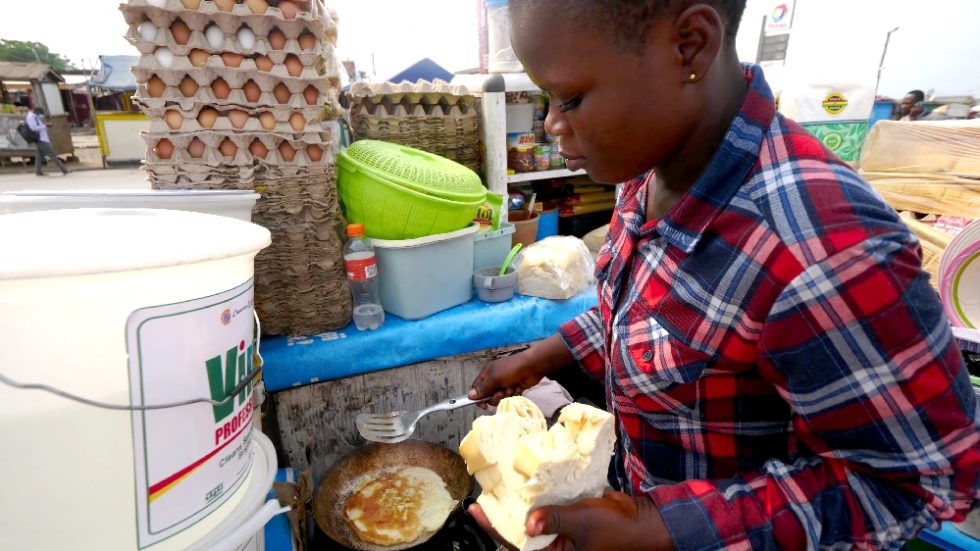 The egg sandwich was nice and tasty, with toasted, fluffy bread. I added some spice but it wasn’t really hot. It was a quick and easy breakfast at roughly $1 USD each. The woman charged me a little extra because I was filming, which I found to be quite common in Ghana. 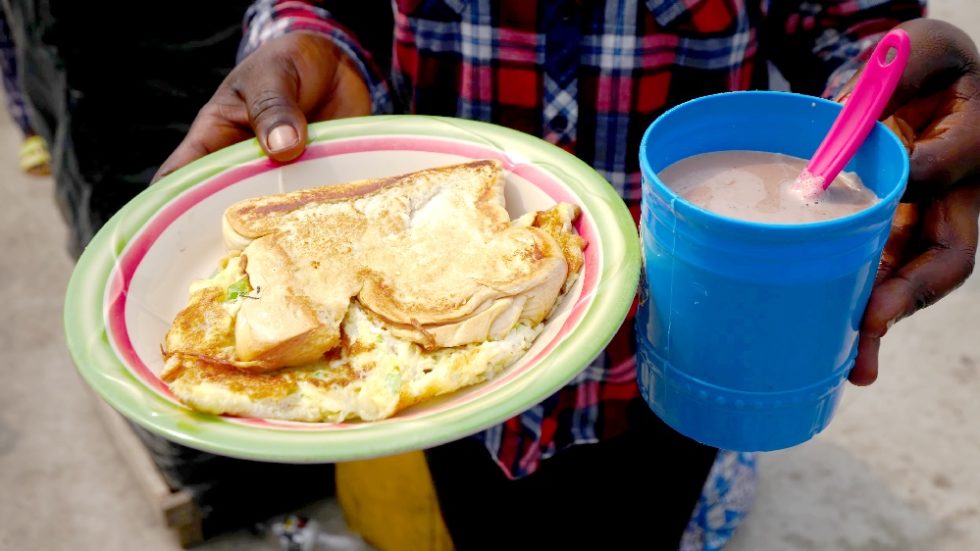 Even though it was overcast, it was extremely hot and muggy. The trick is to drink a lot of water! To help us cool down, we stopped at a coconut vendor by the side of the road. I drank the water in one go and then ate the meat inside afterward.

The coconut water was so cool and refreshing. I could have had ten of them! They give you a piece of the coconut shell to use as a spoon to scoop out the meat. It’s so tender and creamy and is really good for you, too! It cost us about $1.20 USD for 3 coconuts. 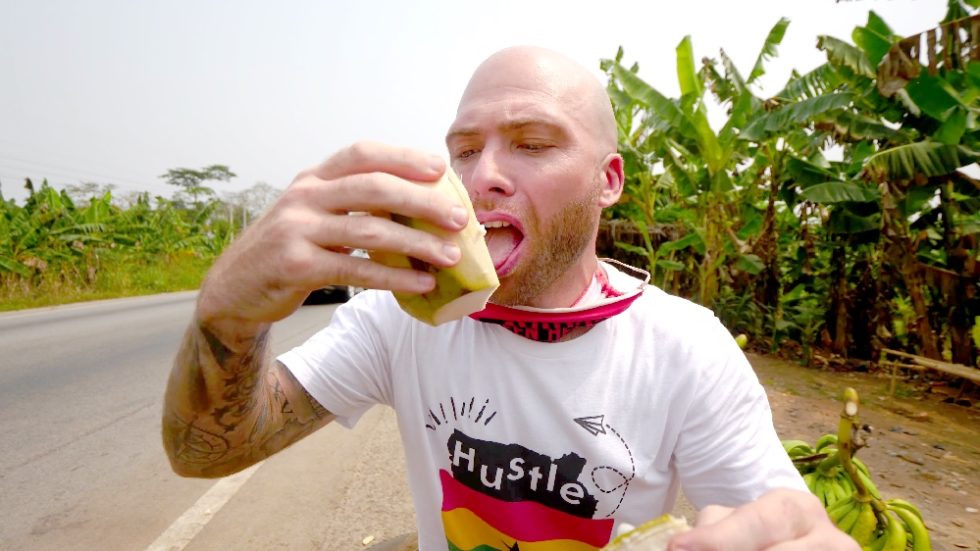 Further on, we stopped at a roadside stall where hunters were selling grasscutters, which are a type of rodent used as bushmeat. They catch the grasscutters and hang them up to try to sell them fresh. If they can’t sell them fresh, they skin them, remove the organs, and smoke them! They look like huge guinea pigs! 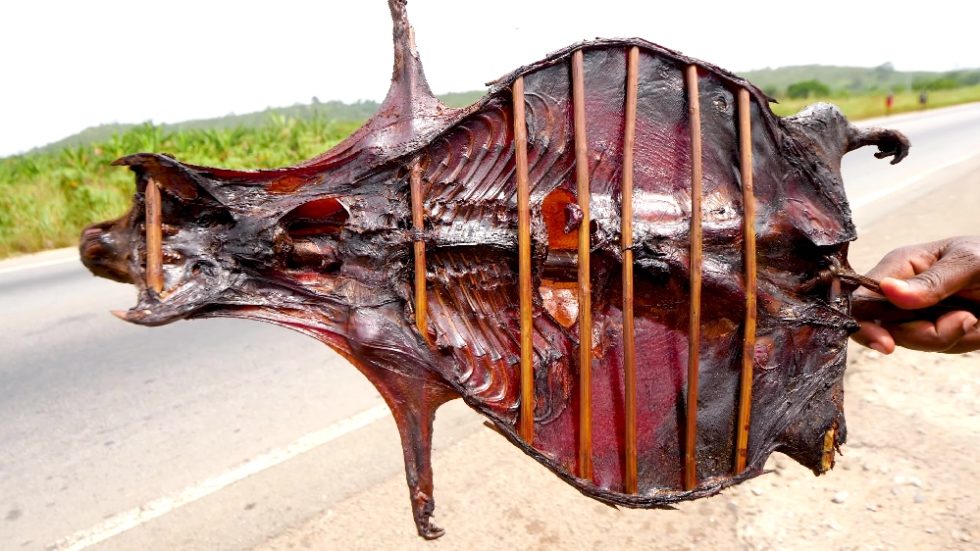 We reached another junction where tons of vendors were selling bread, fried squid, kenkey, clothing, and more. It was a real flurry of activity there, with tons of vendors and even more customers milling about. 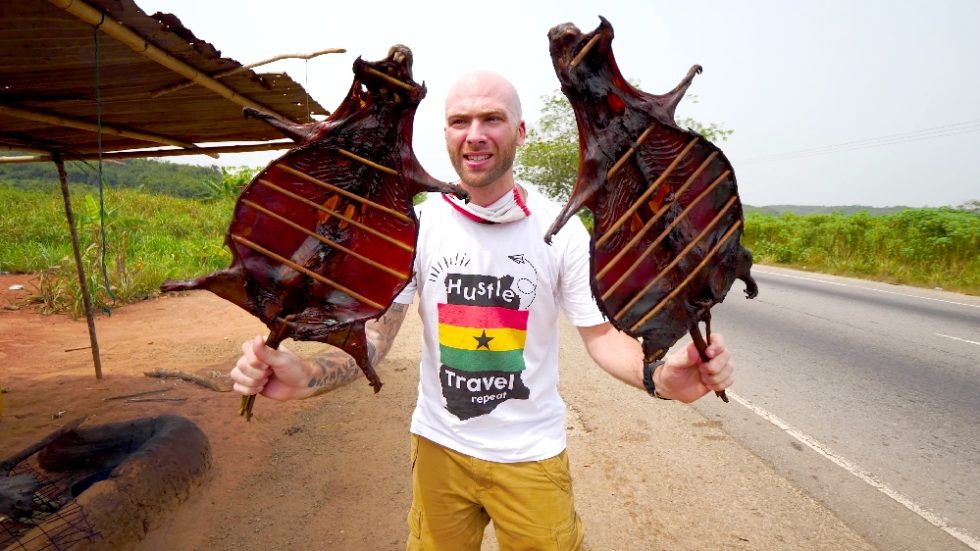 The trip to Cape Coast took us about 6 hours in all because of the number of times we stopped. What a memorable travel experience! Seeing some of the most extreme street food in Ghana in the flesh was definitely a highlight! Huge thanks to my friends at Jolinaiko Eco Tours for letting me have this incredible experience. 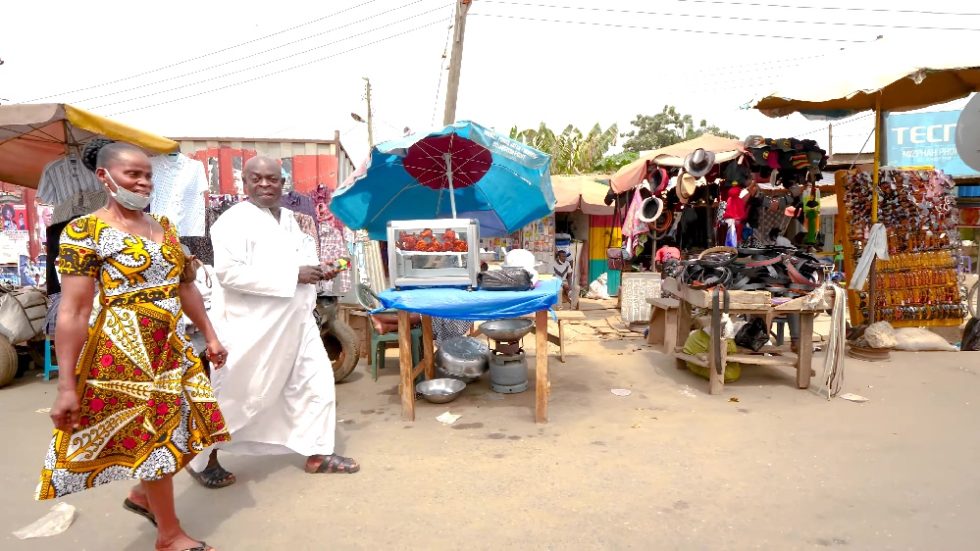 I hope you liked coming with me to see the most extreme street food in Ghana as I drove from Accra to Cape Coast. If you did, please give this video a thumbs up and leave a comment below. Also, please subscribe to my YouTube channel and click the notification bell so you don’t miss any of my travel/food adventures around the world!