As my road trip through the West African nation of Ghana continued, I set out to explore Elmina, the largest fishing town in Ghana. Come with me as I visit the most famous fish market in Ghana, eat some waakye, and explore Elmina Castle in Elmina, Ghana!

Elmina is also the first European settlement in Ghana and dates back to 1482, when the Portuguese built Elmina Castle. My morning began as Isaac (my guide from Jolinaiko Eco Tours) and I set out to walk through the town. 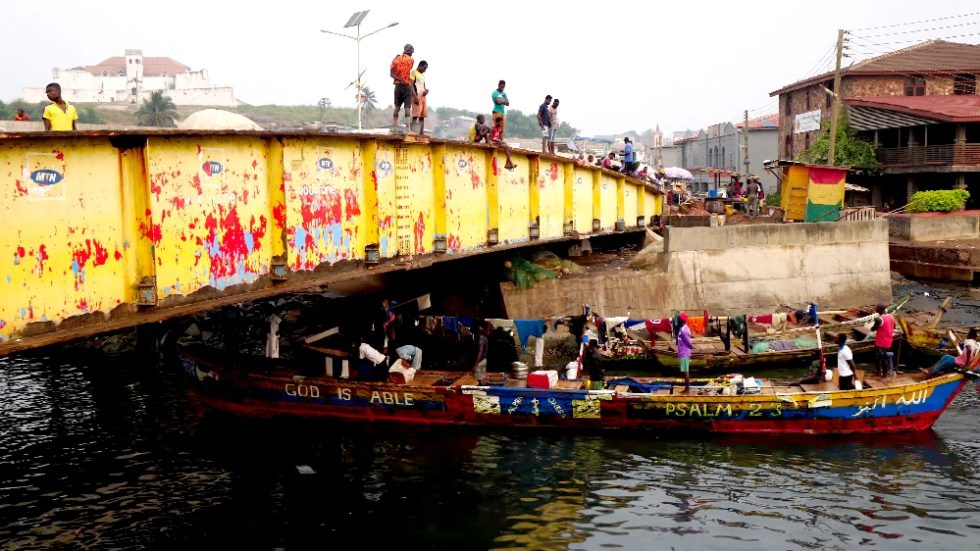 We crossed the Old Bridge and got a great view looking over the lagoon and all the fishing boats, fishermen, and the market along it. It was only 7:30 in the morning, but the entire area was packed with an unreal number of people. 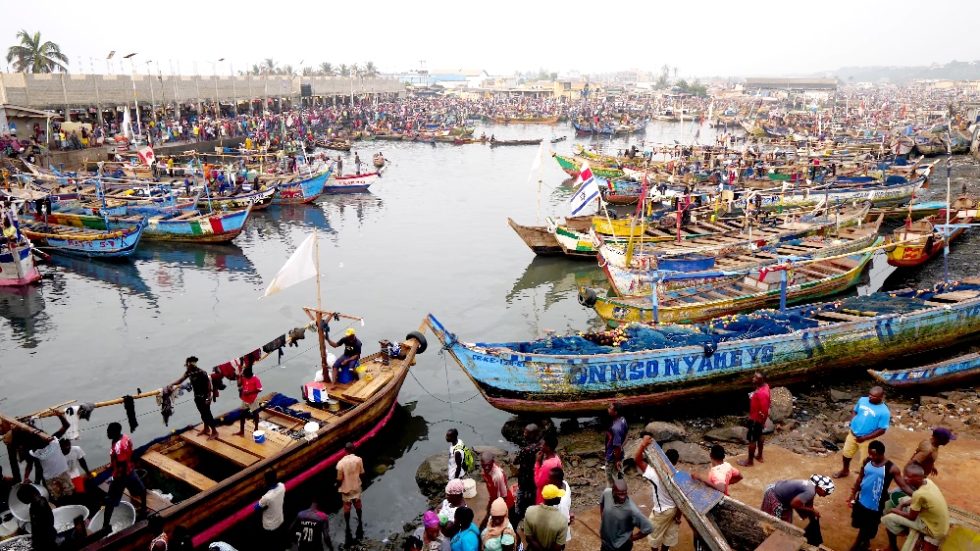 From the bridge, we could also see a Dutch fort in the distance. I headed down to the market, which was sensory overload. I saw people making banku, which smelled amazing. 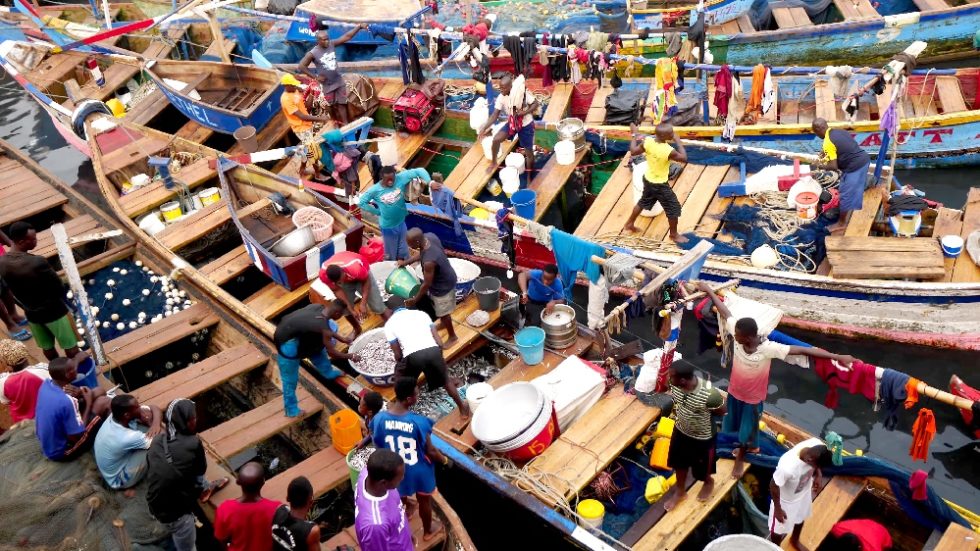 There, I met up with Michael from Torchlight Tours. He’s a local who would be showing me around. Most of the activity we saw was the fishmongers selling fish. The fishermen go out overnight and bring back the fish they catch. As we watched, they were preparing for heading out the next day. 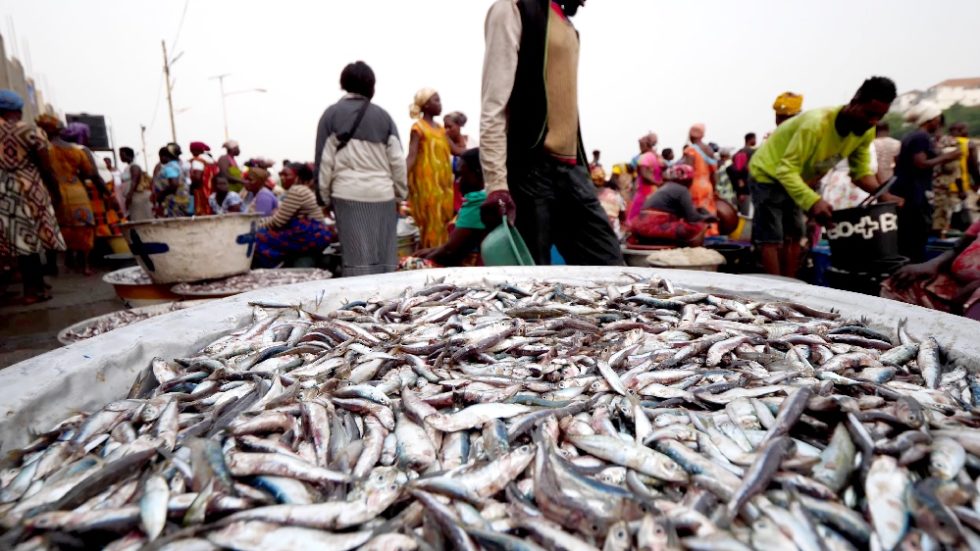 They don’t fish on Tuesdays, so this area is a lot quieter then. It’s considered taboo to fish on that day. They sell the fish fresh, but they also salt and preserve some of them. There were tons of different species of fish, as well as shrimp, squid, and even shark!

I personally advise exploring this market with a guide, and being extremely respectful if you come with a camera. Many people don’t want to be filmed or photographed, and will only consent to it for a small fee. 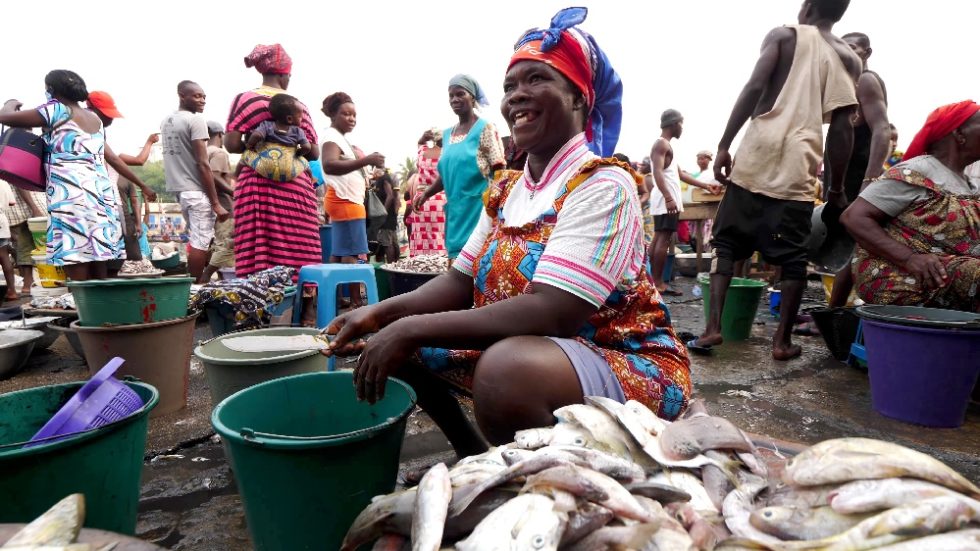 From the market area, we visited the carpentry part of the market where they build the fishing boats. There were also fishermen fixing their nets and removing the scales from the fish they had caught. 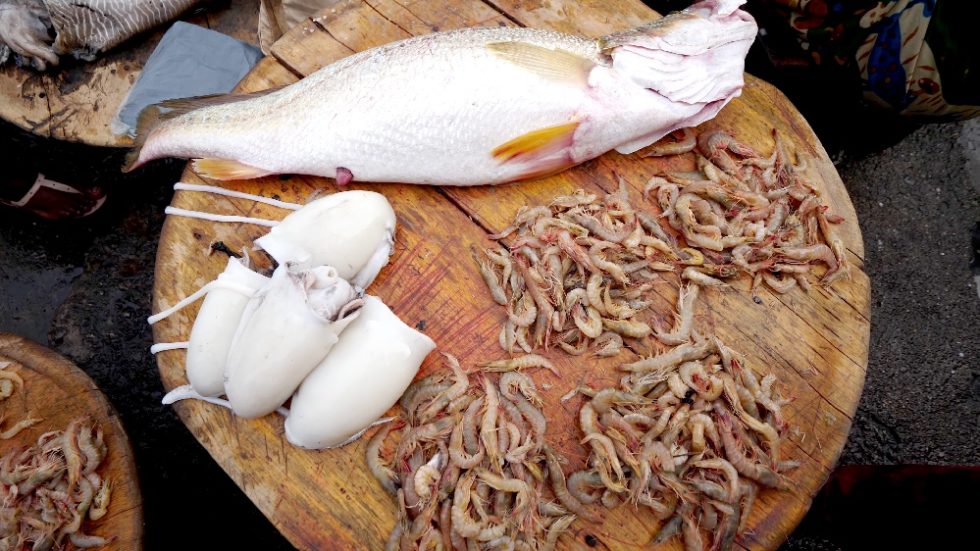 I saw the wooden “skeleton” of a fishing boat and others sanding the wood down. But I was getting hungry! 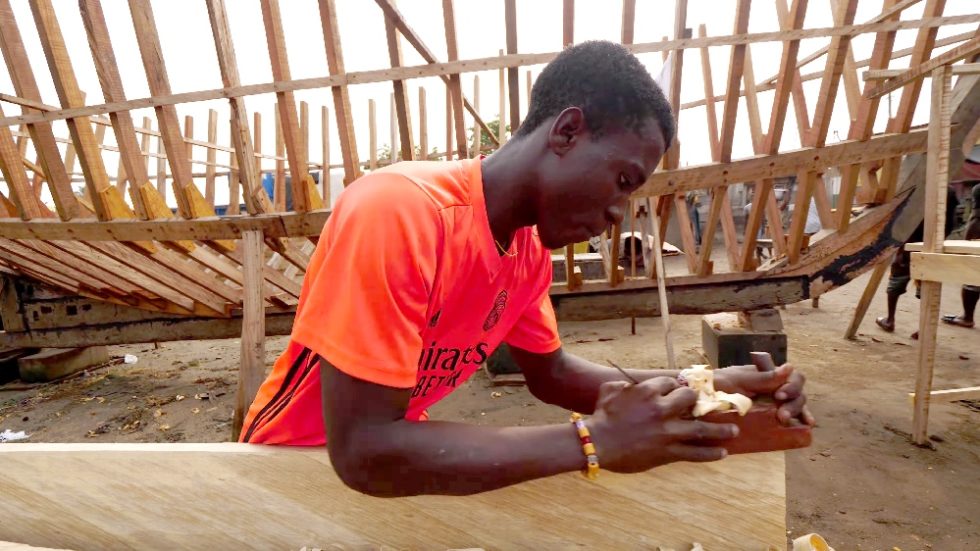 Next, we visited the area where the fishmongers smoke and preserve the fish. There, the women smoke them by putting the fish on screens, and stacking the screens in layers over the fire. 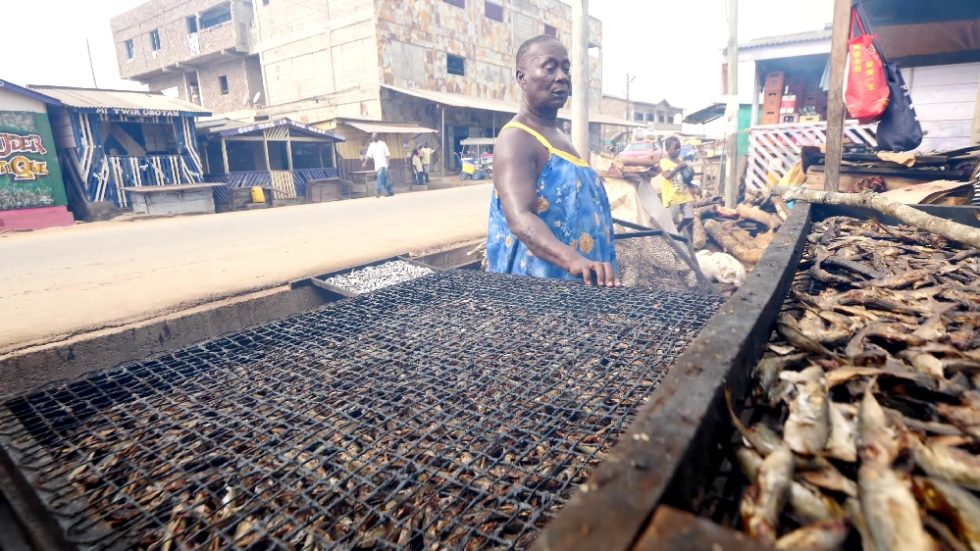 I tried a smoked fish. I had to remove the bones, but it was salty and full of flavor. It’s an authentic look at life here in Ghana! 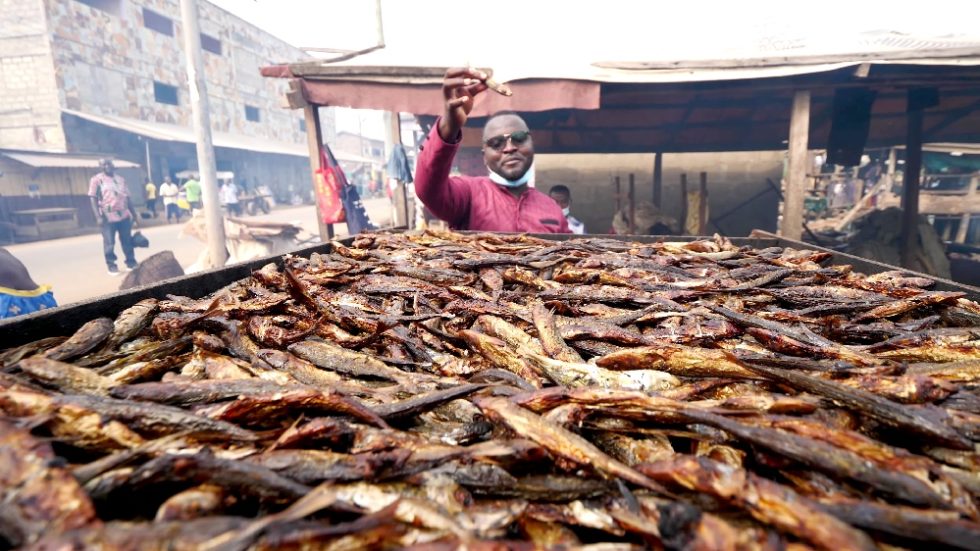 From there, Michael and I continued through the chaotic streets to a coconut vendor. I drank the water and then the vendor cut it up so I could eat the meat! The meat inside was so fresh and filling! 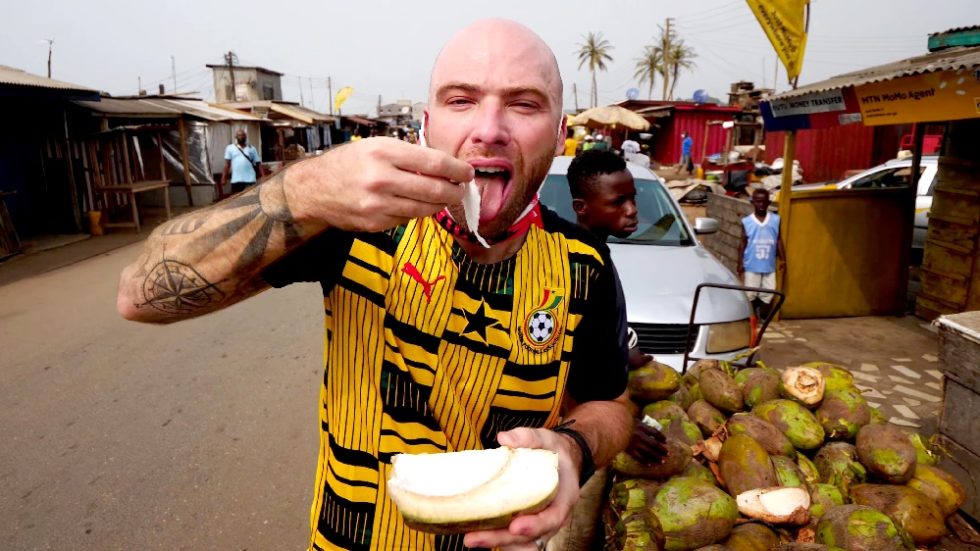 Then, we headed back to the bridge. The activity in the market had died down since it was around 10 a.m. So we headed off to get some waakye (rice with beans), pasta, fish stew, casava flour, and a spicy shito, and eat in a back area in front of a church from 1900.

The dish came with a very spicy sauce but it was so tasty. I loved the mix of the crunchy casava flour, the dry noodles, and the smooth paste of the shito. The meat of the fish stew added a meaty texture. It only cost 6 cedi ($1.20 USD) each. 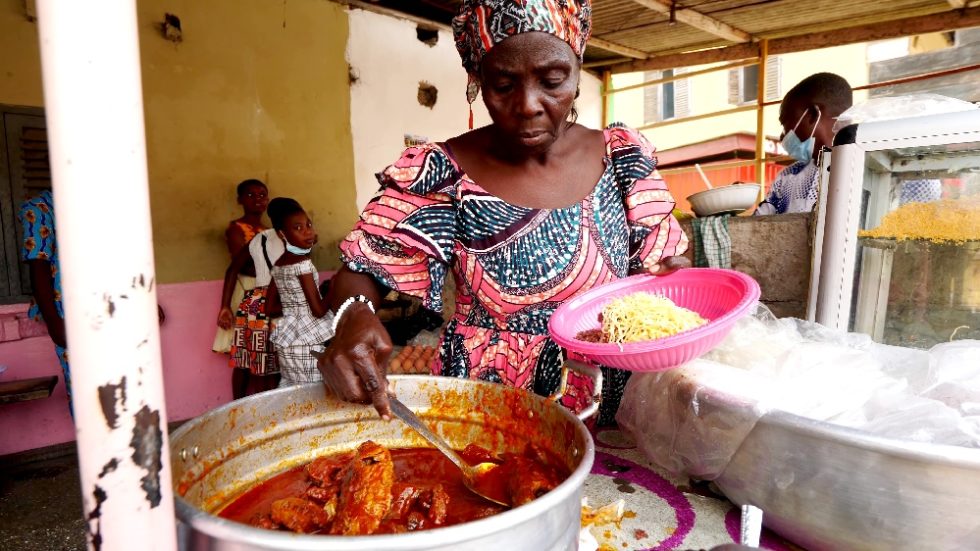 Waakye is my favorite dish in Ghana so far. I love that the fish is so fresh and local, and the contrast of textures throughout the dish were amazing. Add in the spicy shito and you have one incredible dish! 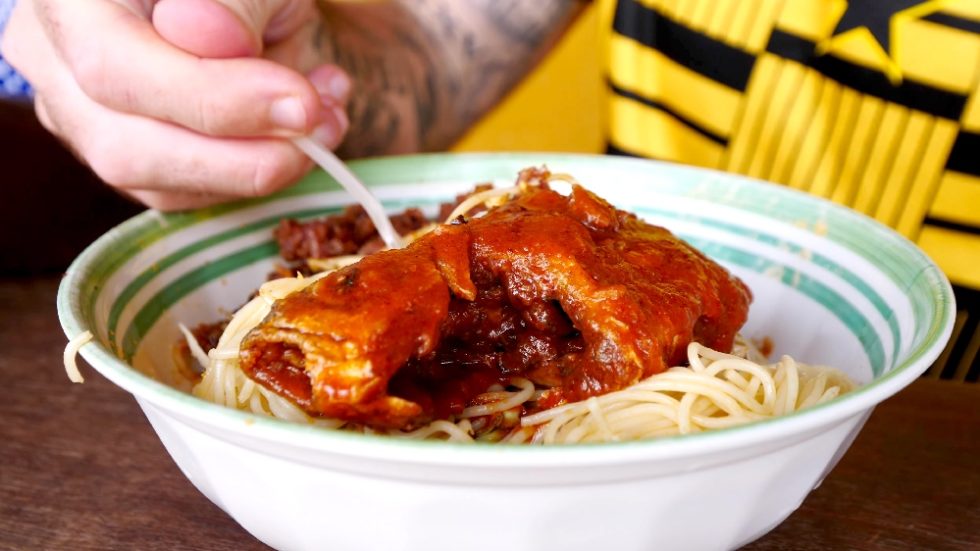 After breakfast, we headed back across the Old Bridge and passed through a mini market where they sell clothes and shoes. Then, we arrived at Elmina Castle, which looked very similar to Cape Coast Castle. 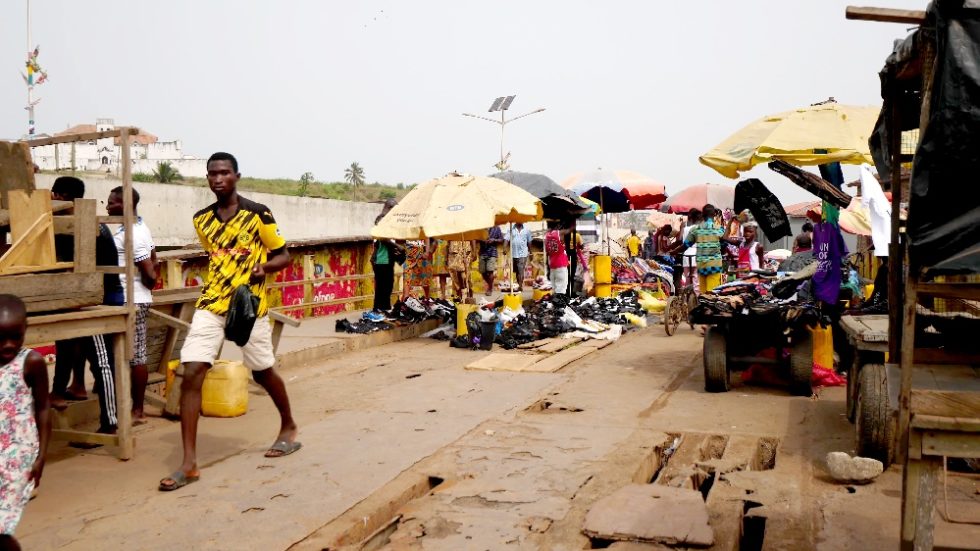 On the outside are defensive walls and a moat. It’s also known as St. George’s Castle. It was built by the Portuguese in 1482 after their arrival in 1471, but was taken over by the Dutch in 1637. It’s 539 years old and the oldest castle in West Africa. 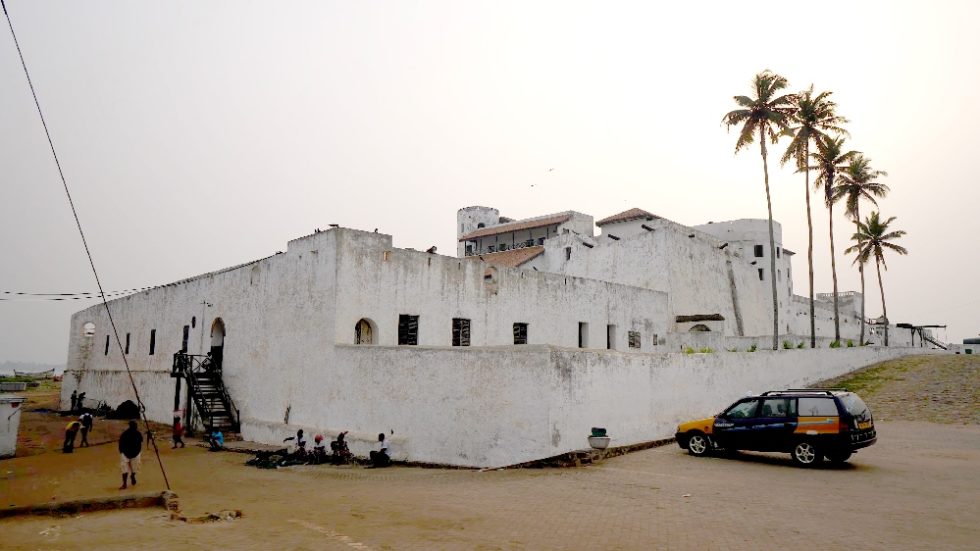 The city got its name from the huge supply of gold the Portuguese got from the area. They called it “the mine,” or “El Mina.” The storerooms on the ground floor were later converted into dungeons to hold enslaved Africans.

I visited the cell used to hold the freedom fighters, or anyone who resisted. They were kept there until they died. Then, we moved on to the dungeon where 200 men were kept. At Elmina Castle, there are 3 dungeons for the men and 3 for the women, as opposed to 1 for men and 2 for women at Cape Coast Castle. 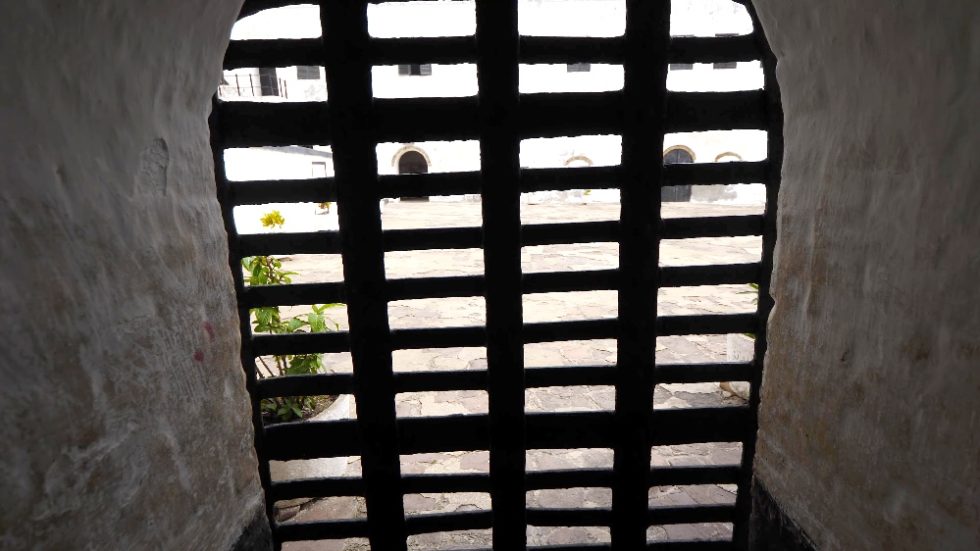 The Room of No Return contains the Gate of No Return, where slaves were then sent to the ships to be transported across the Atlantic. Five to ten men were chained to one another and moved sideways through the narrow opening. 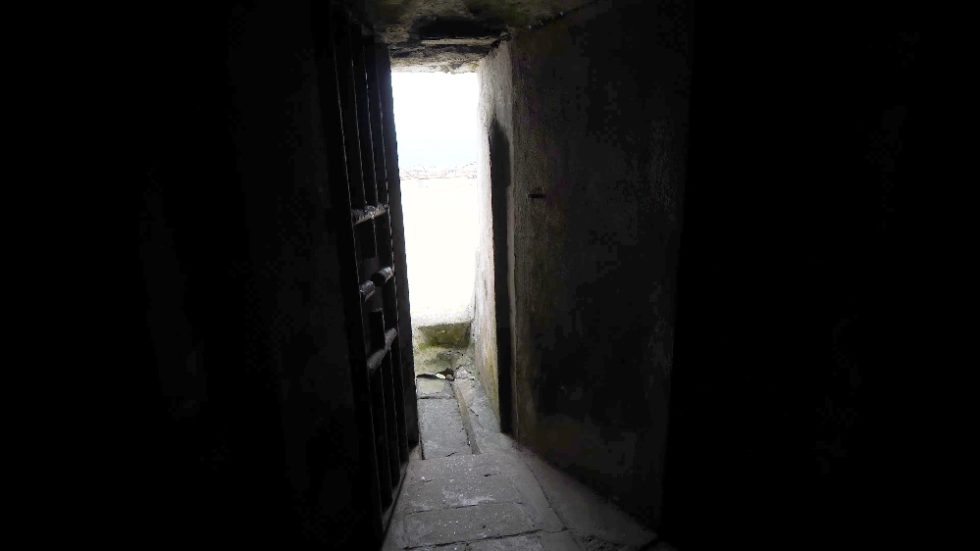 The female slave dungeon held about 400 women. It’s painted now, which happened in 1979 when it was named a UNESCO site. Before the pandemic, people could stay in the dungeons overnight to see what the experience is like. 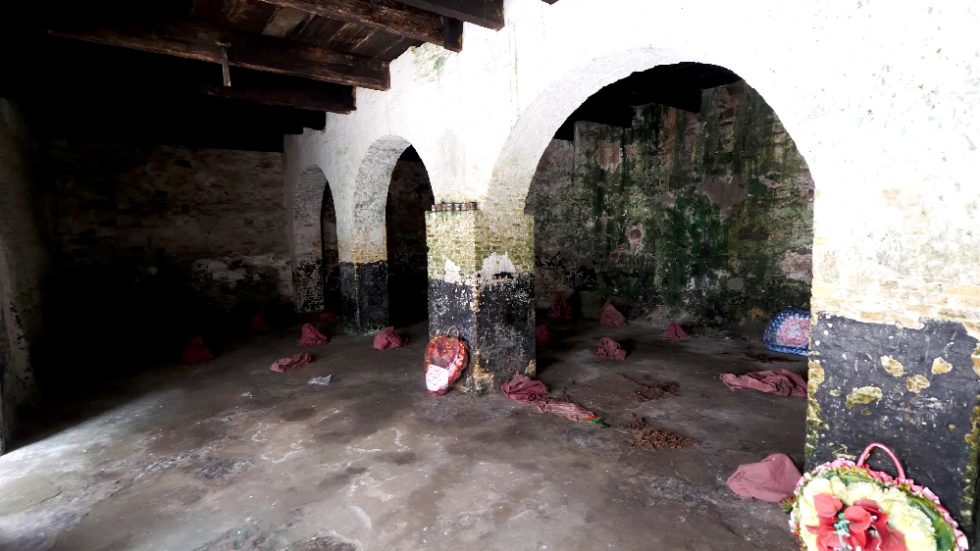 Buckets were places in the dungeons where the slaves would relieve themselves, but bodily fluids also covered the floors. The floors have since been cleaned, so you can see the original stones. 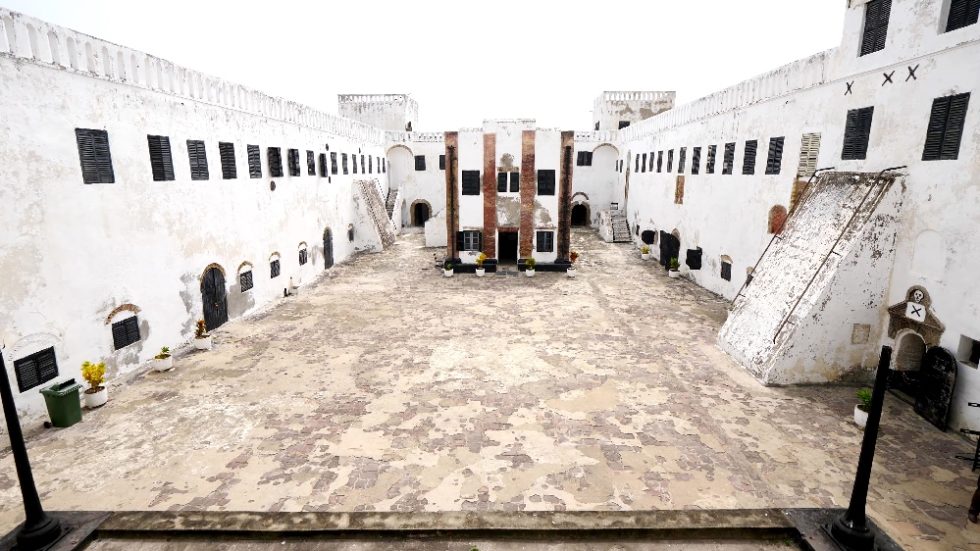 Then, we visited the officer quarters, where you have views over the ocean and the entire town. You can also see the cannons on the ramparts, the fishing market, and the ocean.

What an eye-opening morning exploring the most famous fish market and Elmina Castle in Ghana. Visiting the market was a fun and interesting experience, and exploring the castle was both sobering and heartbreaking. Huge thanks to Michael and my friends at Jolinaiko Eco Tours for letting me have this experience. I also must thank the Golden Hill Parker Hotel for hosting me during my time in town! 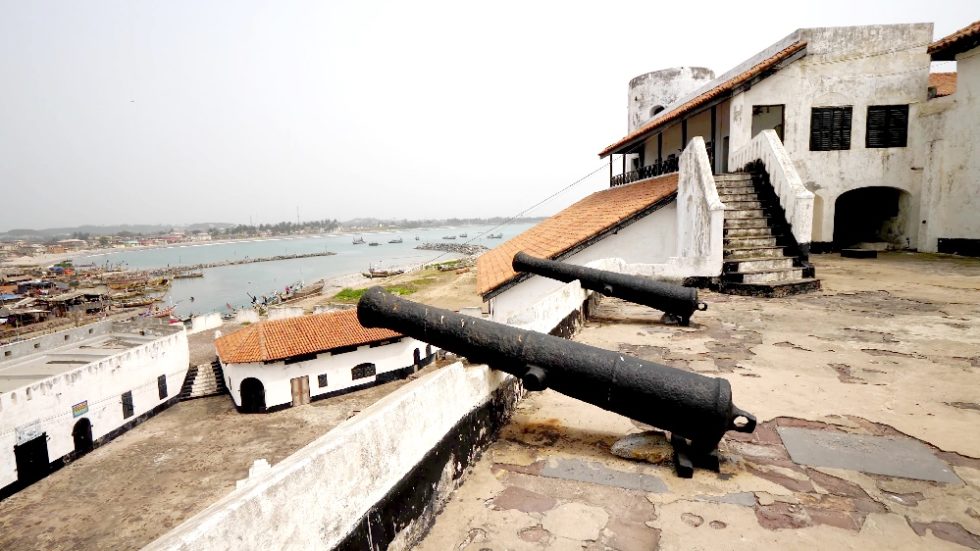 I hope you liked coming with me to the most famous fish market in Ghana and Elmina Castle in Elmina, Ghana. If you did, please give this video a thumbs up and leave a comment below. Also, please subscribe to my YouTube channel and click the notification bell so you don’t miss any of my travel/food adventures around the world!