Straddling the Itajaí-Açu River in the state of Santa Catarina in southern Brazil is the city of Blumenau. Located just 81 miles northwest of the state capital, Florianópolis, Blumenau is known around the world for its rich German heritage. Nearly all of the top things to do in Blumenau, Brazil take advantage of its German culture.

The History of Blumenau 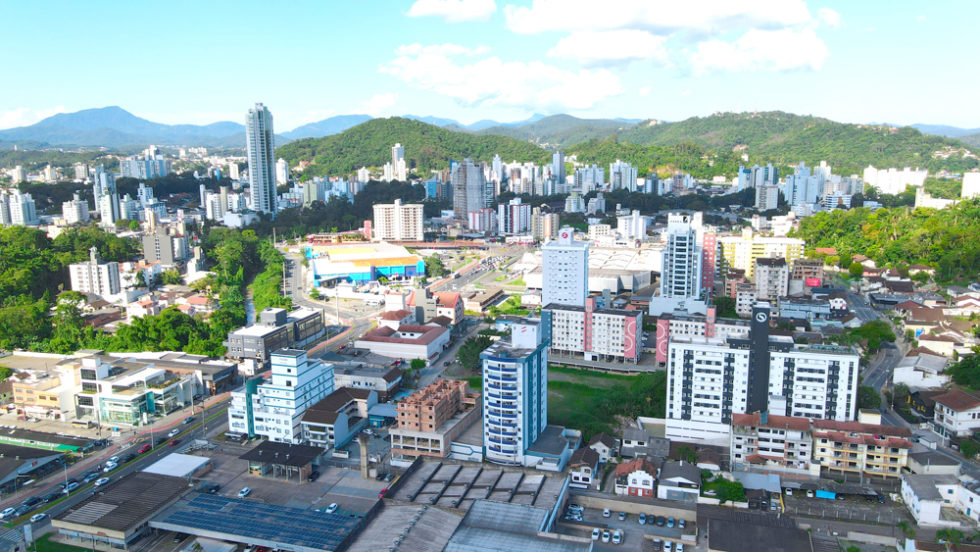 Founded on September 2, 1850 by German pharmacist and chemist Hermann Bruno Otto Blumenau, Blumenau was the result of a project to create new German settlements in Brazil. He arrived in the area with seventeen other German immigrants, and the town prospered despite floods, animal attacks, and clashes with indigenous people. 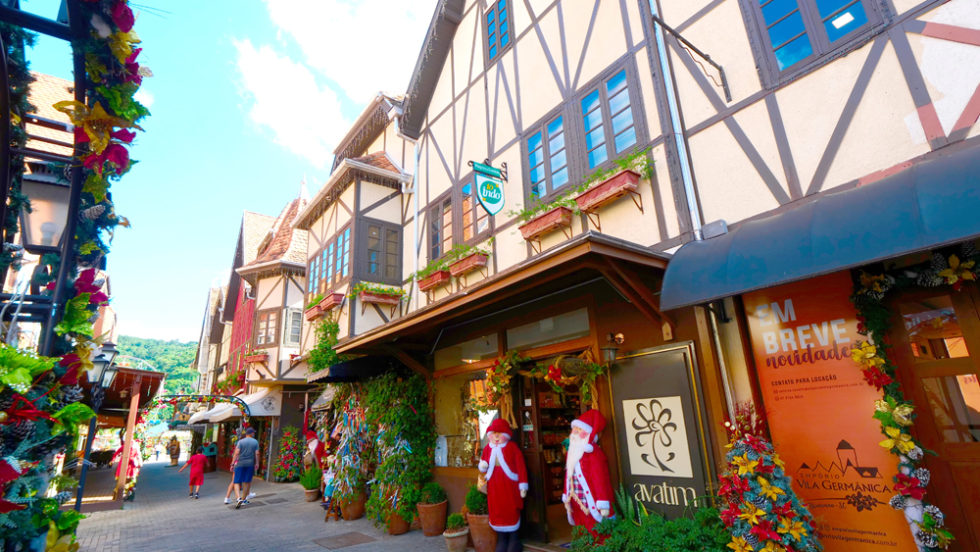 The subtropical city is located in a region called Vale do Itajaí, which boasts large German and Italian populations. From its inhabitants to its food to its architecture, Blumenau would not be out of place in Bavaria or the Black Forest. The city hosts the second-largest Oktoberfest in the world, a raucous celebration that attracts tourists from around the globe.

My Time in Blumenau 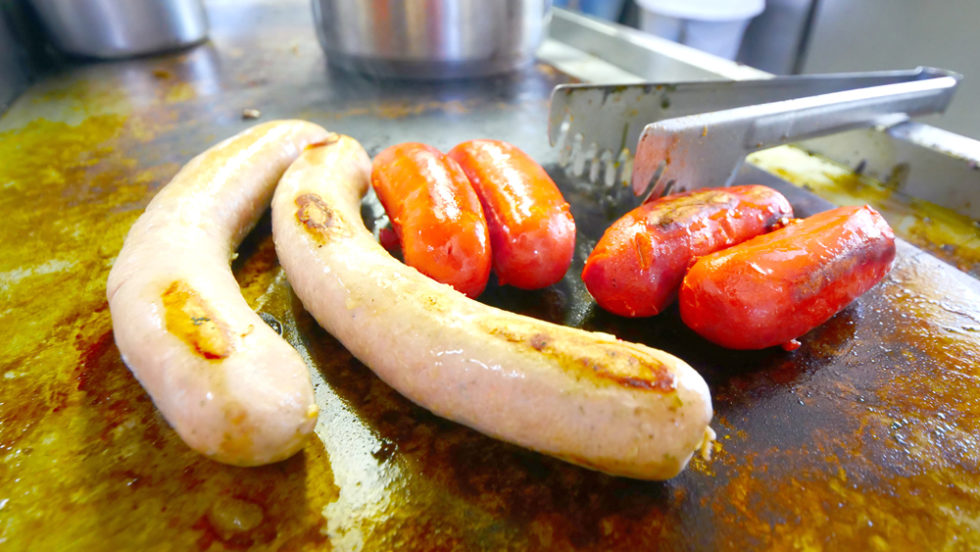 My time in Blumenau was quick—just a handful of hours as I made the five-hour drive from Curitiba to Florianópolis. But during that time, my guides Guilherme and Rafa from Rio4Fun and Rio4Food and I completely immersed ourselves in Brazilian-German culture. 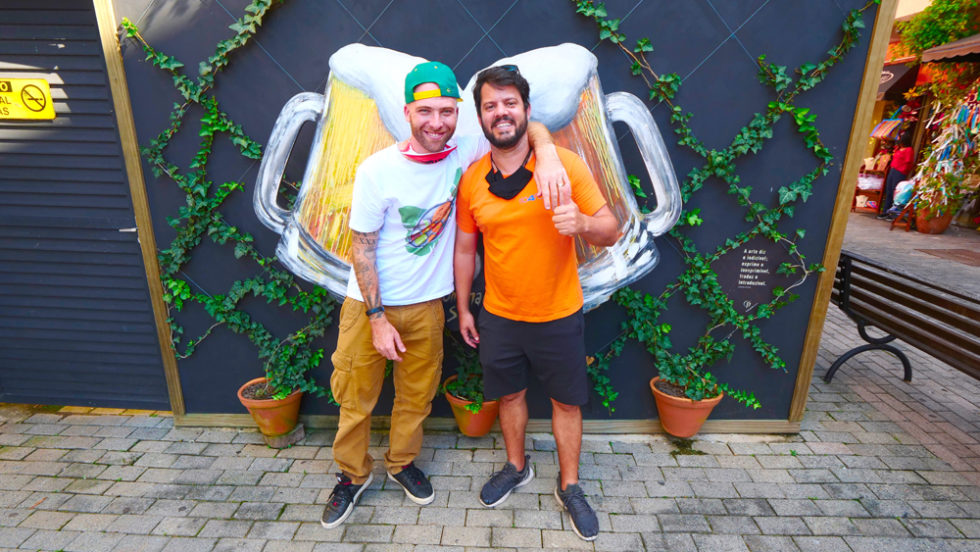 From the traditional German cuisine to authentic German beer, this is a Brazilian city like no other. Everything from the food to the timber framing on the local buildings transported me back to my early 20s, when my brother Dennis and I explored Munich together. It’s one of the most unique cities I visited in Brazil and I’ll show you why in this guide. These are the top things you must do in Blumenau, Brazil.

Check out the Top Things to See and Do in São Paulo, Brazil

Have a Drink at Cervejaria Bierland 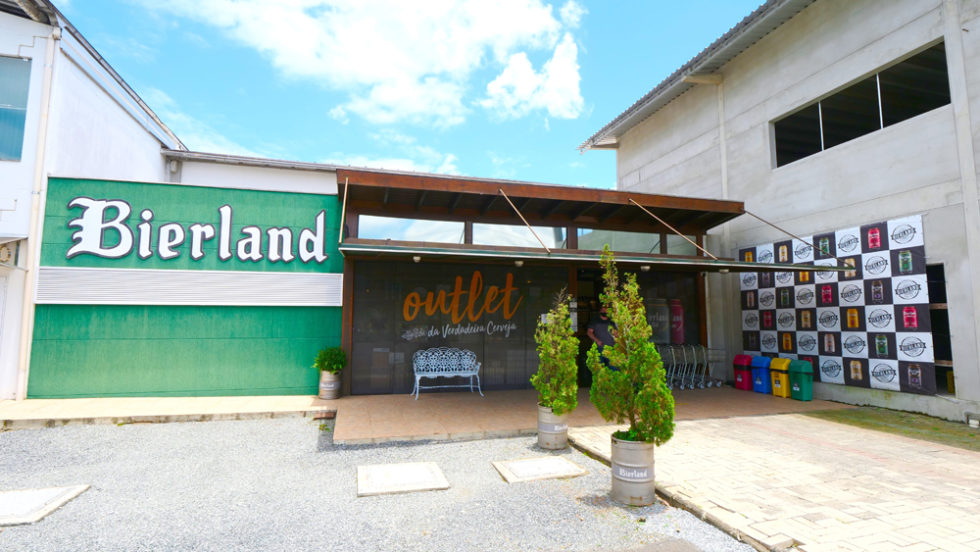 Just 25 minutes outside of town is Cervejaria Bierland, a microbrewery whose name literally translates to “Land of Beer.” One of the longest-running craft breweries in the region, Cervejaria Bierland has operated since August of 2003. 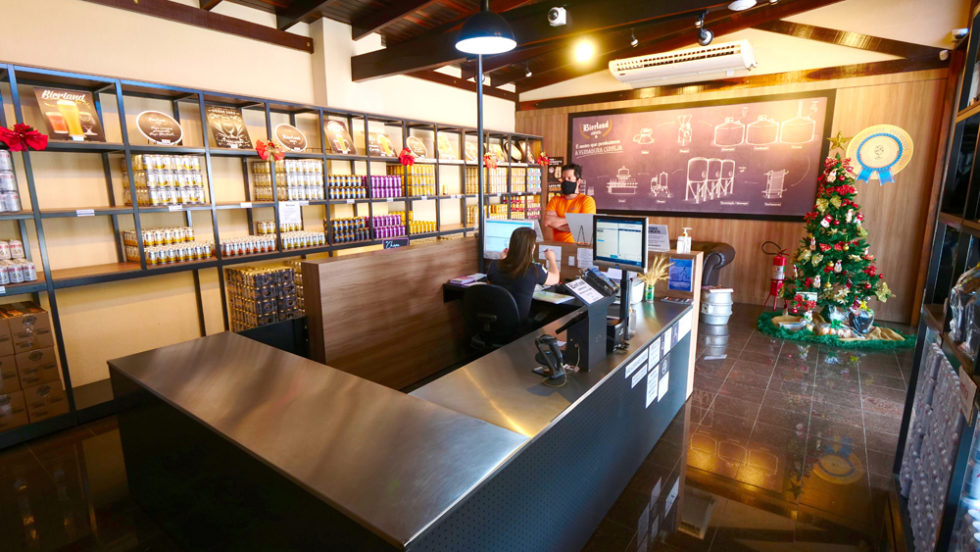 The internationally-celebrated brewery is known for its creative and daring brews. The beers created there take inspiration from German, English, Belgian, and North American brewing schools. It’s among the most well-known in Brazil and has won more than 120 medals in national and international beer competitions. 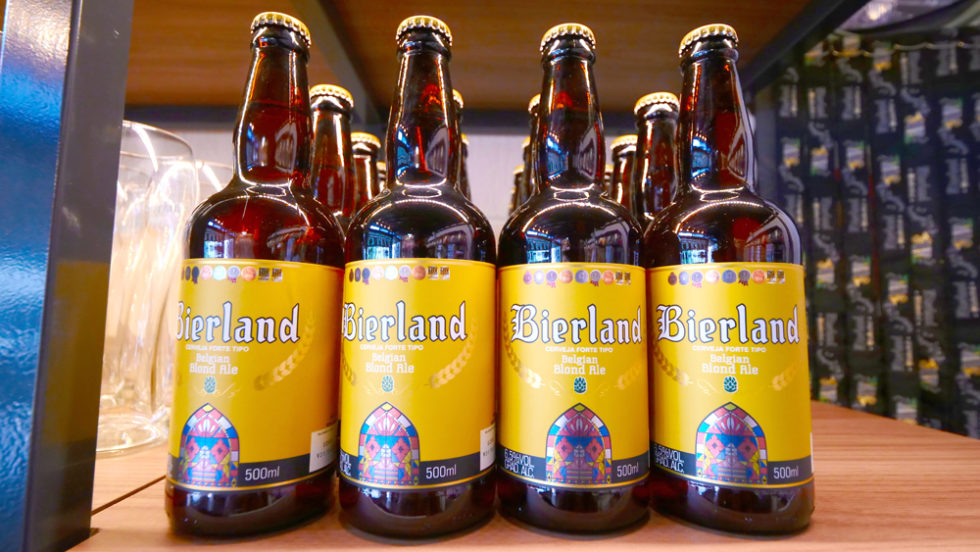 While visitation to their actual brewery is not allowed, they have an attached convenience store that is open to the public. There, they offer a number of different types of beer, and even have a display on the walls that shows the entire beer-making process. 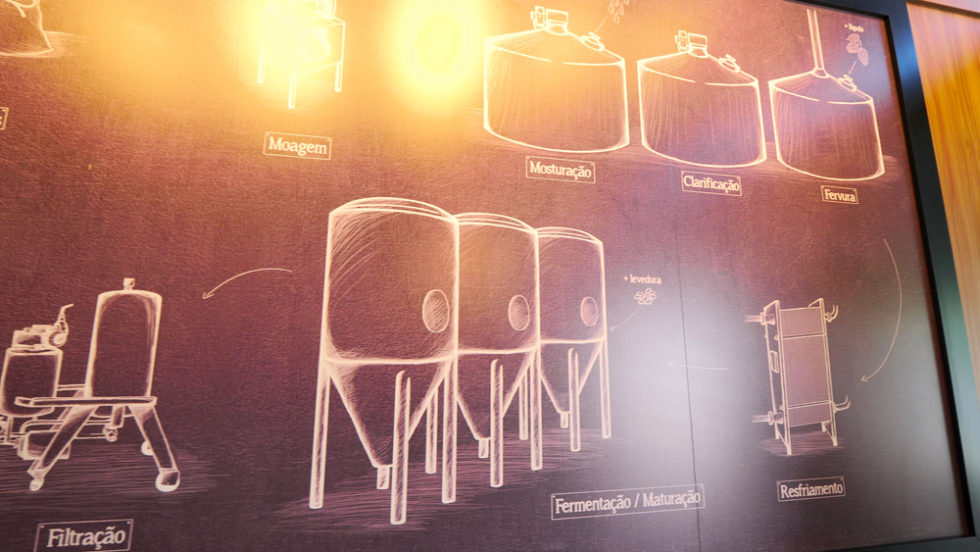 You can also buy official Bierland merchandise, including glasses and growlers. But of course, the main event is the beer itself. Whether you’re into IPAs, stouts, or Pilsens, there’s something here for you. 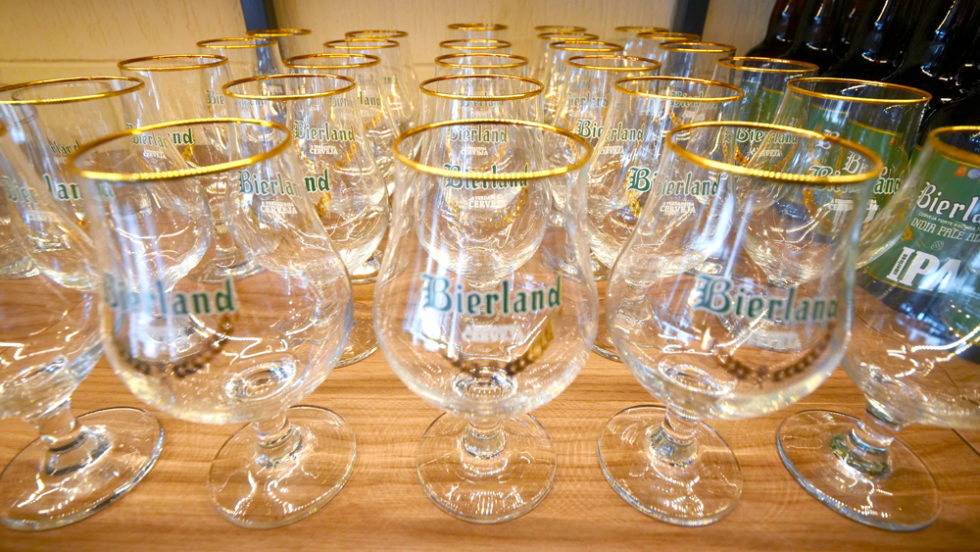 I recommend their 5% Pilsen, a light but bitter brew with a nice, crisp flavor. But my favorite is their refreshing 5.2% stout, a light and milky masterpiece that expertly blended chocolate and espresso, with hints of oats throughout. 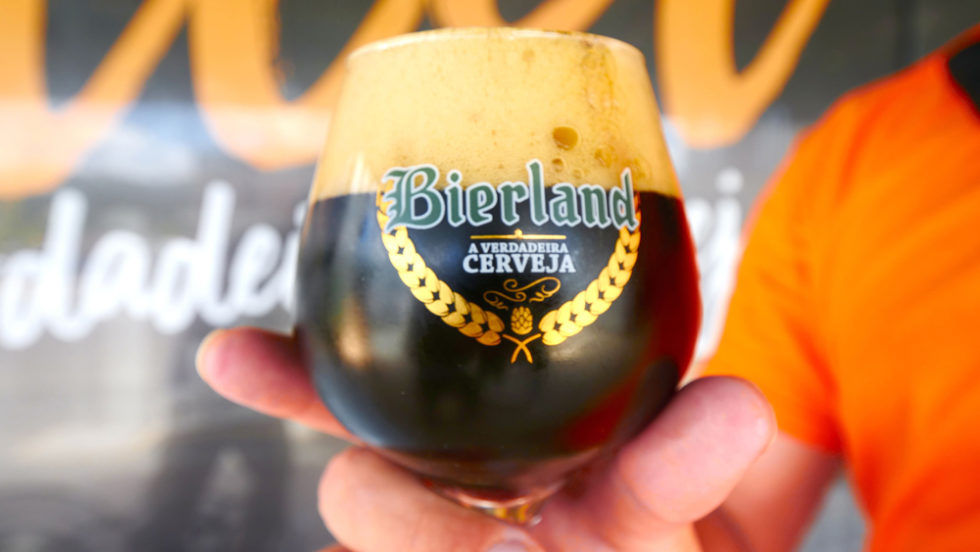 No trip to Blumenau is complete without some German beer, and this is one of the best spots in the city to try some. Stopping by is easily one of the top things to do in Blumenau, Brazil!

Check out my Top 10 Things to Do in Curitiba, Brazil 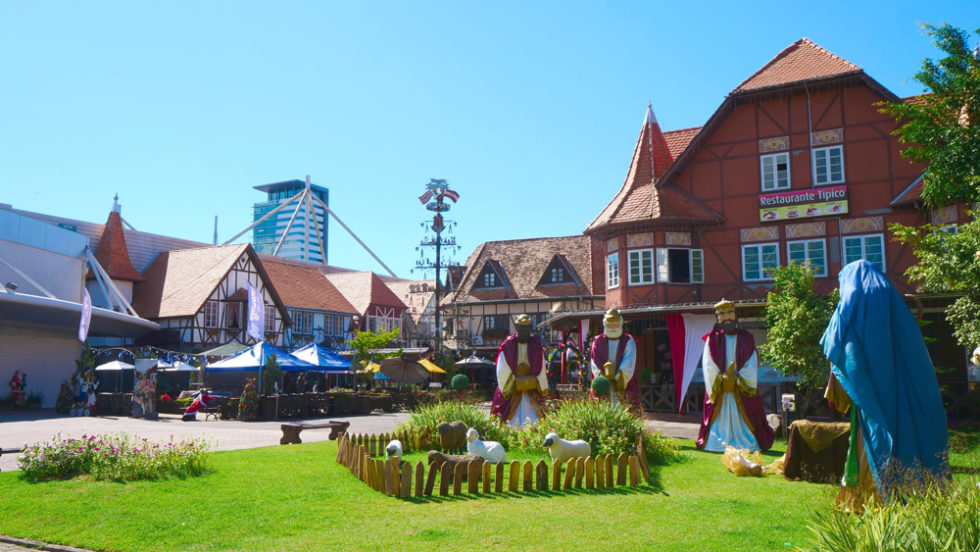 If the beer and food didn’t transport you to Germany, don’t worry. While Blumenau is known for its world-famous Oktoberfest, there are still things to do in town even if you don’t visit in October. Even when it’s not hosting the popular festival, German Oktoberfest Plaza is one of the top attractions in the city! 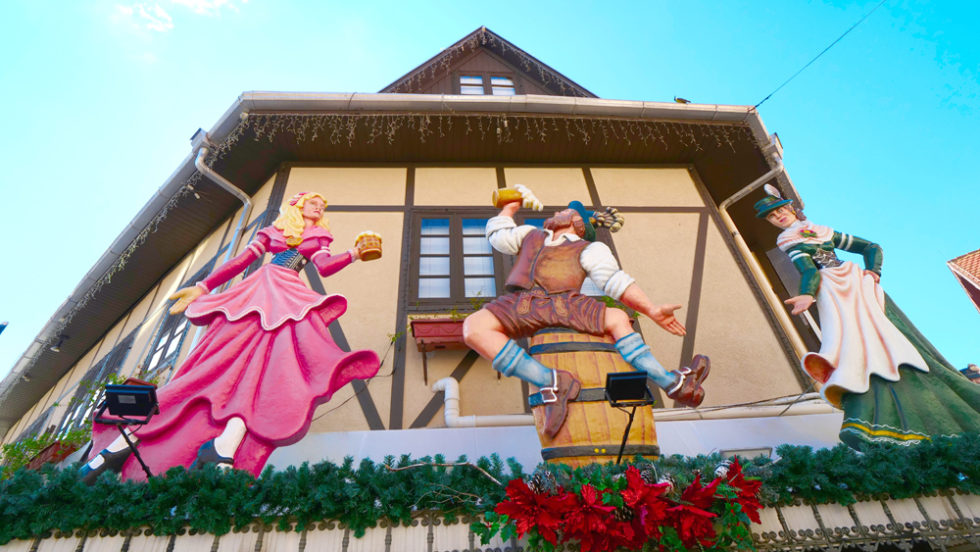 Built to resemble a traditional German village, it’s the perfect place to dive further into German culture. It’s complete with homes and businesses featuring timber framing architecture similar to what I saw in Frankfurt, Munich, and Nuremberg. 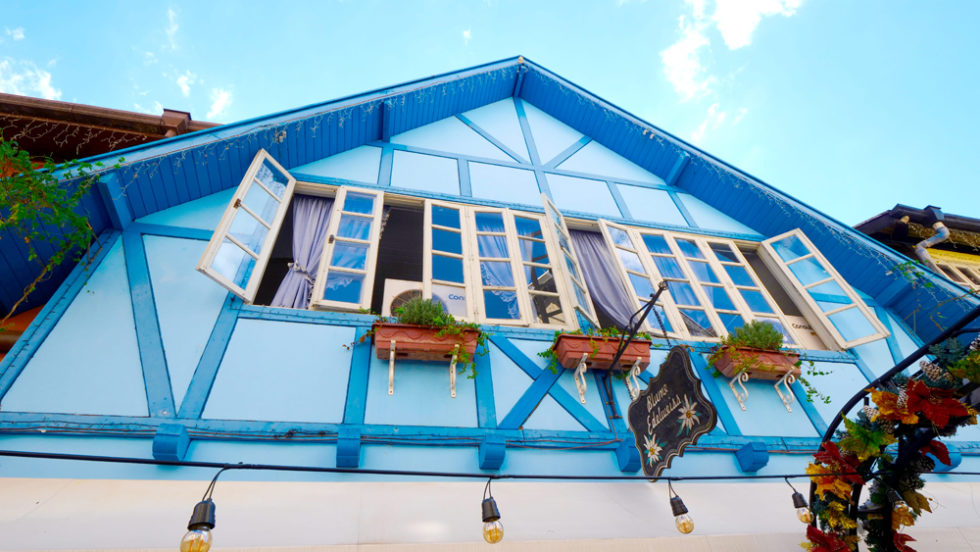 Here, you can grab a bite to eat at one of its restaurants and cafés or enjoy a drink at a beer garden. But if you’ve already had your fill of beer and German food, you can explore the shops and buy some souvenirs! 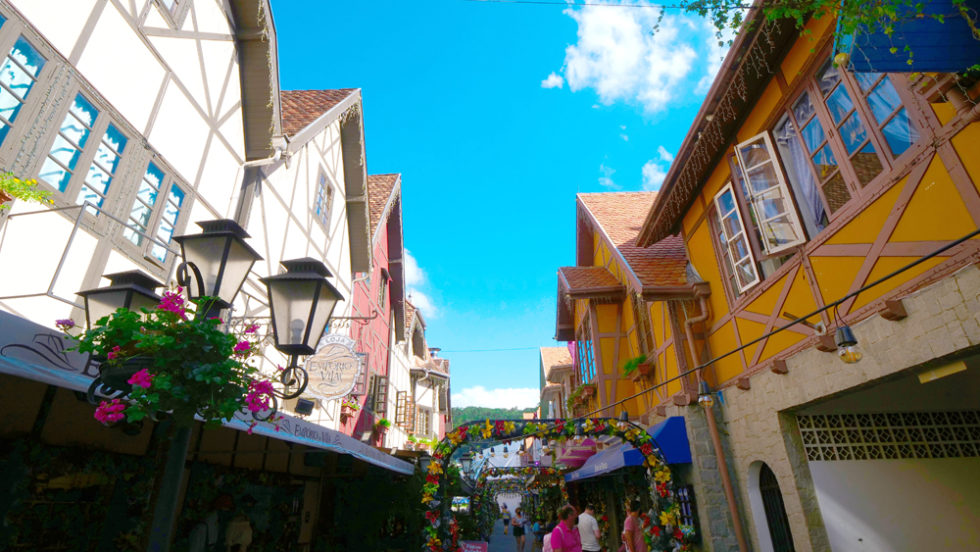 The shops sell everything from Oktoberfest-related glasses to clocks to decorative figurines. You can also find beautiful wall hangings, hats, and T-shirts. If you have a lot of people to buy souvenirs for, or if you’re just shopping for yourself, this is the place to be! 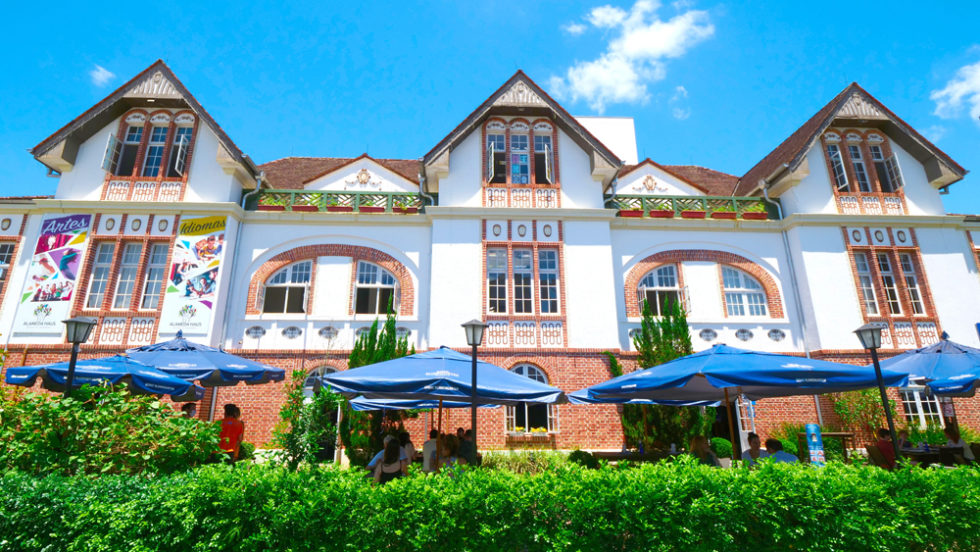 Perhaps the single best spot in town to get a taste of the local German food culture is Senac Blumengarten. This restaurant and beer garden is located inside a large, German-style building that once served as a hospital. It looks like something straight out of a Bavarian fairytale! 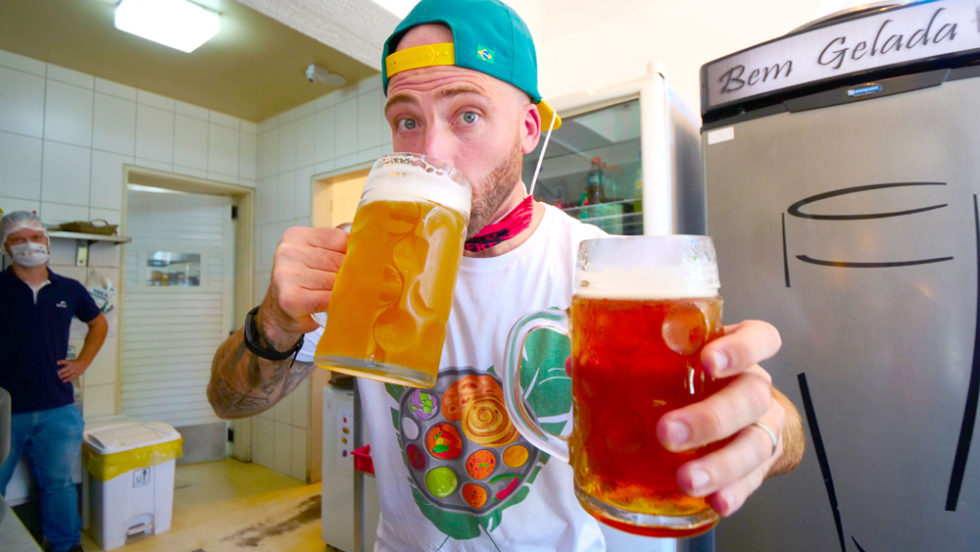 In their draft beer area, you can order and try craft beers like their hoppy Capybara IPA and their creamy and more traditional Vila Weissbier. I suggest kicking back with a large mug of your favorite as the cooks prepare your lunch. 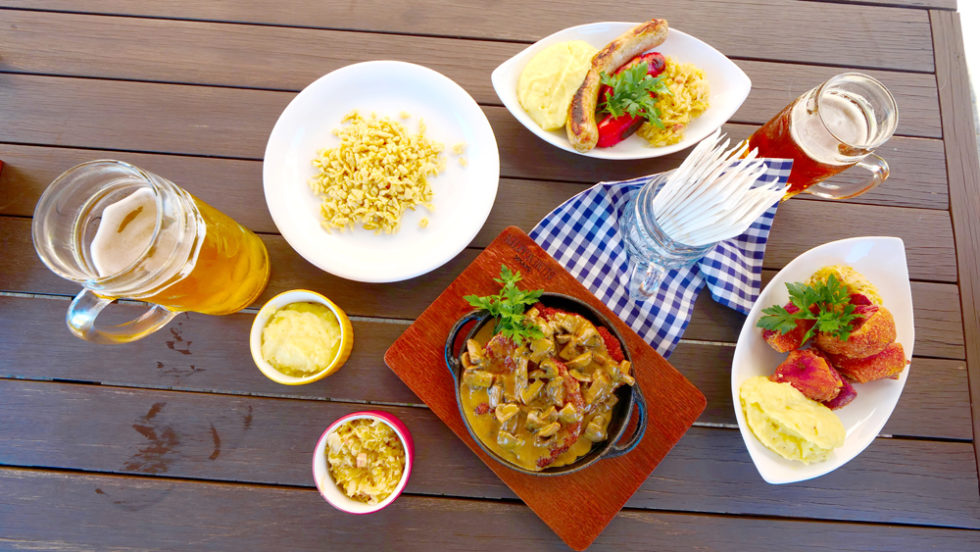 I’m all about eating only local cuisine when I travel, so I went for an all-German feast. It included white sausage, schnitzel with mushroom gravy, a fried pork leg, sauerkraut, and mashed potatoes. 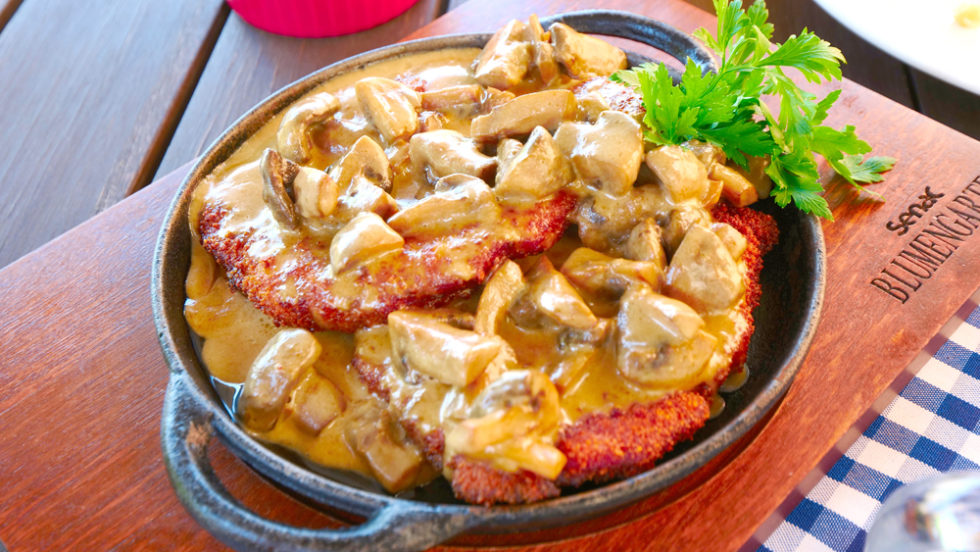 The sweet schnitzel combined with the creamy gravy and buttery mashed potatoes was easily the highlight of our meal. I also couldn’t get enough of the fried pork leg, which was crispy and fatty, almost like the lechon I’ve eaten in Puerto Rico and the Philippines. 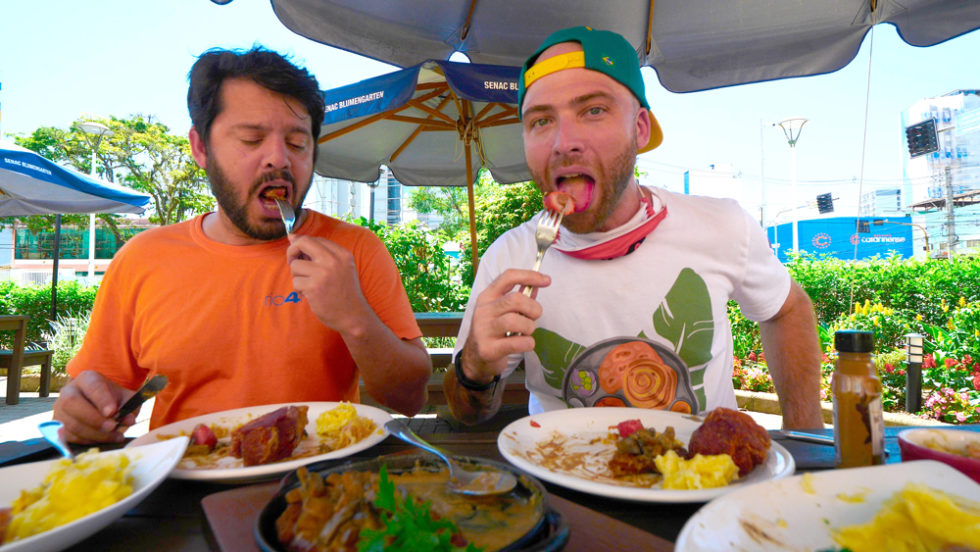 German food is heavy and meat-rich by nature, so it probably isn’t for someone who’s watching their waistline. But if you’re in the mood for a treat, I highly recommend having lunch or dinner at Senac Blumengarten. It’s one of the best things to do in Blumenau, Brazil and will leave you feeling full and satisfied!

Check out my VIDEO: Visiting Christ the Redeemer!! One of the New Seven Wonders of the World | Rio de Janeiro, Brazil 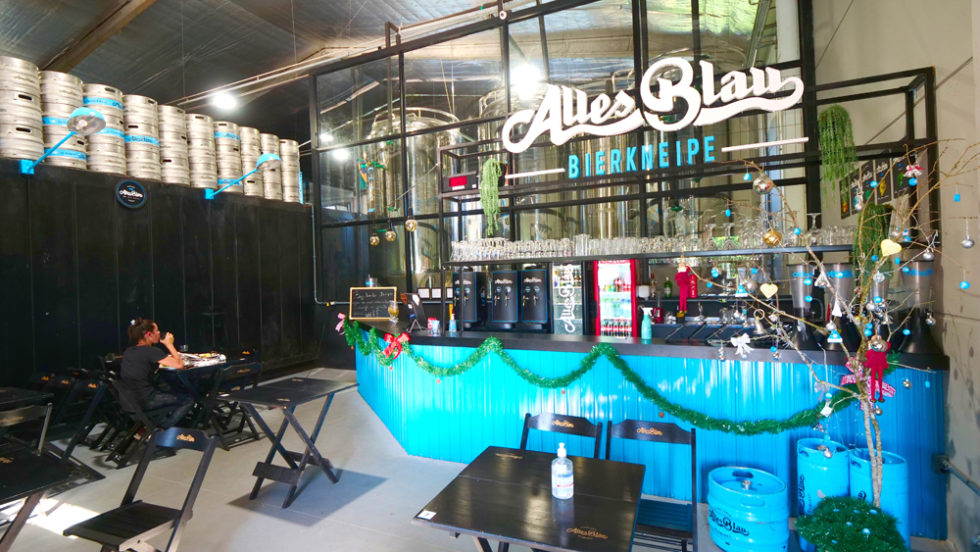 If you’re looking to visit a German-style brewery in Blumenau where you can tour the facility, Alles Blau Bierkneipe Blumenau is the place for you! This brewery has an impressive setup, which includes a four-barrel system and massive fermentation tanks. Some of the tanks can hold anywhere between 1,000 liters and 6,000 liters! 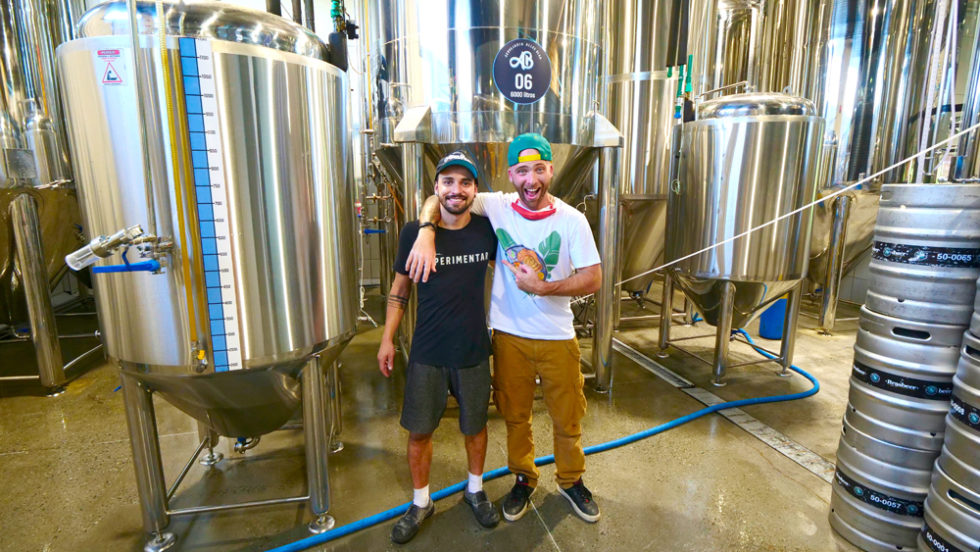 You can also see their bottling system, the supply of malt in their storage room, and their beer-aging barrels. I’ve visited many breweries around the world, but seeing the way beer is made never gets old. 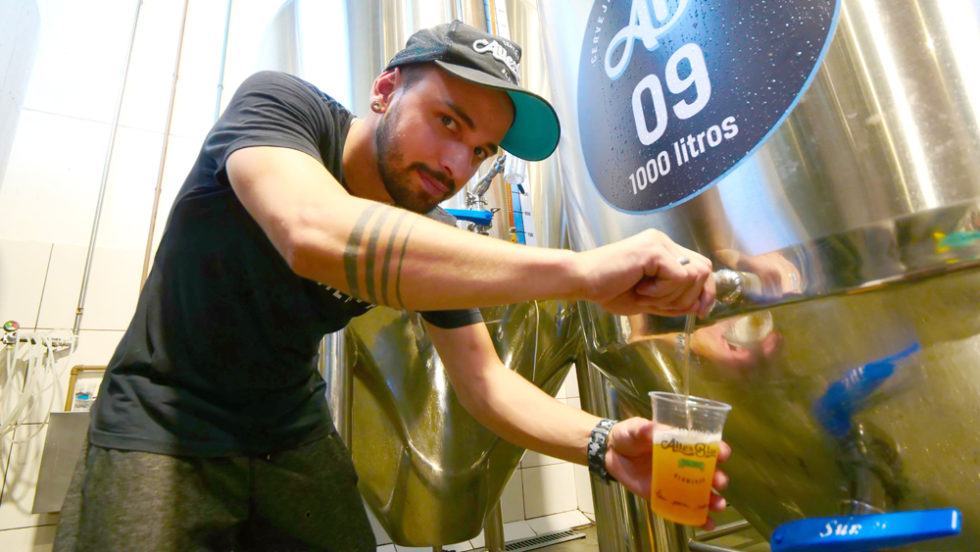 Of course, the highlight of your brewery tour will likely be the moment you get to try some of their beer! You can try some direct from the fermentation tanks. I sampled a crisp session IPA, a passionfruit-infused sour, and their newest IPA. I’m a big IPA fan, and this one was cloudy and light on the bitterness, with a nice head. 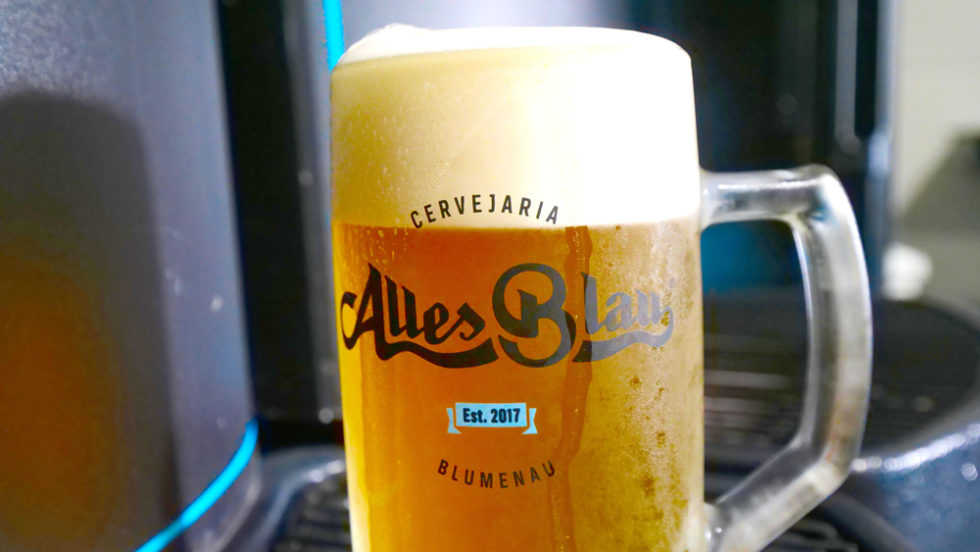 If you’re hungry, you can also enjoy a meal (and a brew, of course) while you’re there, or take it to go. Either way, I’m sure a stop at Alles Blau Bierkneipe Blumenau will be among your favorite things to do in Blumenau, Brazil. It was certainly one of mine! 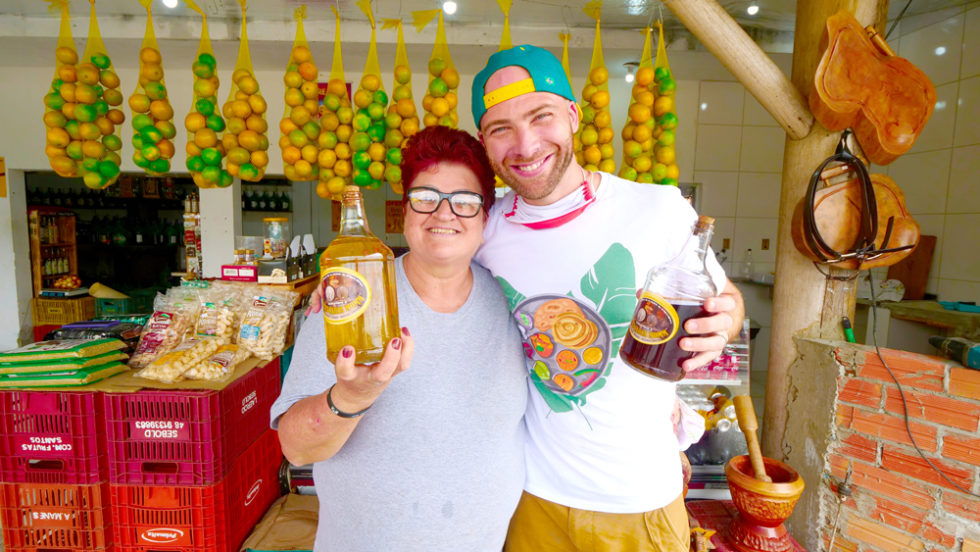 From its delightfully German-inspired buildings to its heavy, meaty fare, Blumenau is the place to visit for a taste of Deutschland in Brazil. Whether you’re just looking to pass through or if you want to stay a few days for Oktoberfest, there’s plenty to explore in town. Book a trip south of the equator today to experience the Germanic flair of Blumenau, Brazil!