My afternoon began in the southernmost village on the island with my friends Guilherme and Rafa from Rio4Fun and Rio4Food. We would be heading out on an unreal seafood tour of the area known as Pântano do Sul. There are beautiful beaches, mountains, and restaurants, and more, and the area is kind of swampy. It’s like a tropical paradise! 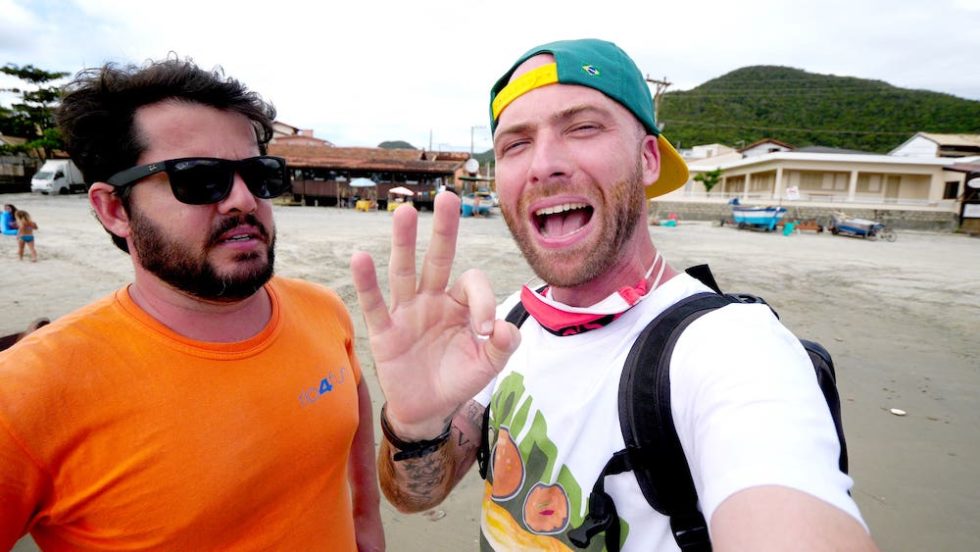 Our first stop was a seafood market called Peixaria Trinta Réis. Inside, they had tons of shrimp on display, as well as fish, squid, oysters, and more. Outside, the fishermen of the village were dragging a boat to the water using wooden planks. 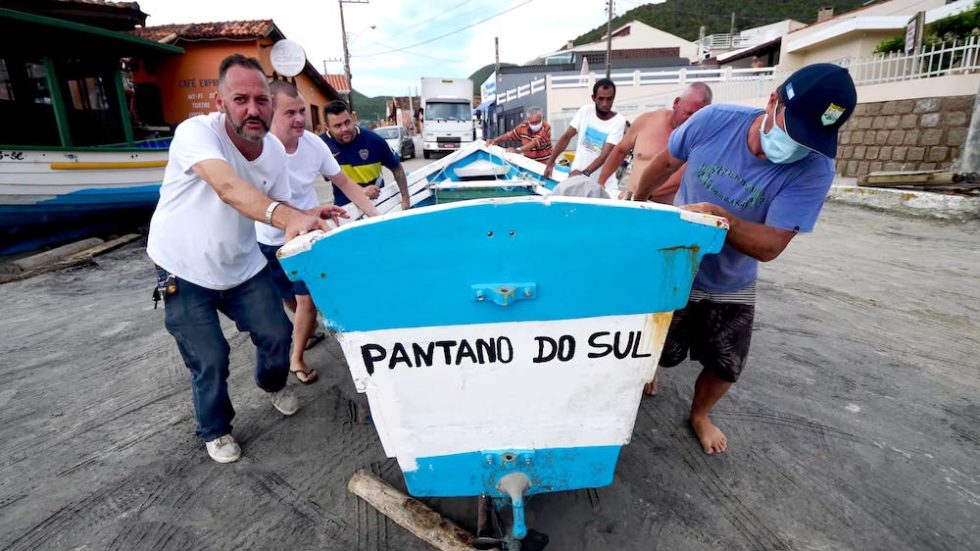 Then, we headed over to Mondala Restaurante, where we started with some floral honey cachaça. It was so strong! 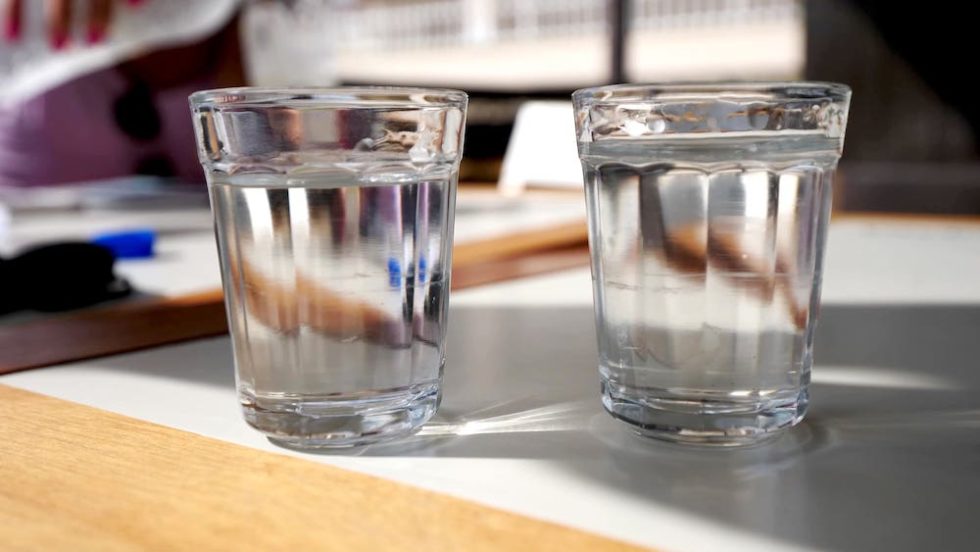 Then, we jumped on some shrimp with lime, codfish croquettes, and fried stuffed crabs in their shells. We also had a platter of raw oysters. Guilherme told me to eat the shrimps whole, including the shell and the head! They were crunchy and different! 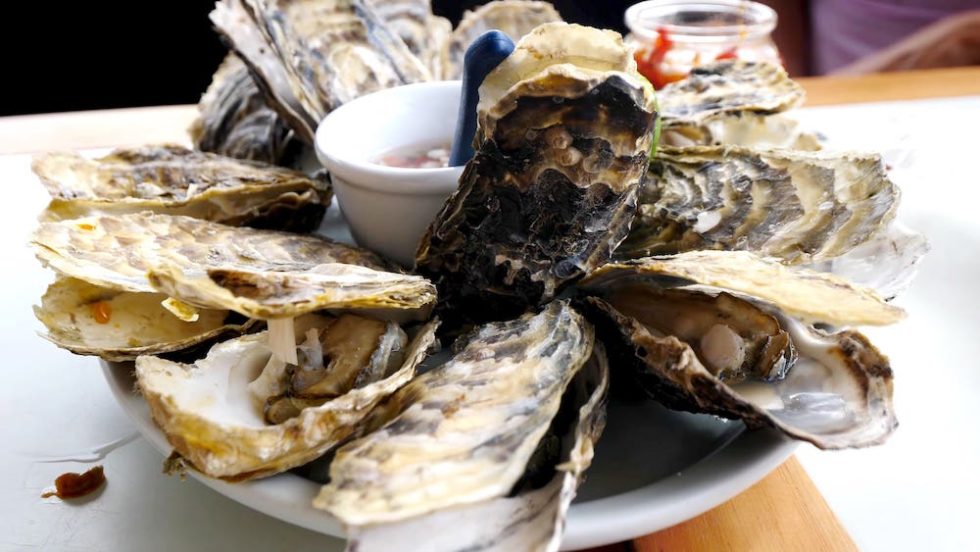 I added some spicy sauce to the shrimp, which gave them a nice kick. Then, I started on the croqueta with a squeeze of lime and a drizzle of olive oil on top. It was salty and soft from the potato in it. It was similar to a Cuban croqueta!

Next was the stuffed crab, which I added some spicy sauce, lime, and olive oil to. It was like a spicy crab cake. I loved the cilantro, tomatoes, and onions in it. It was so filling and fully shredded crab. 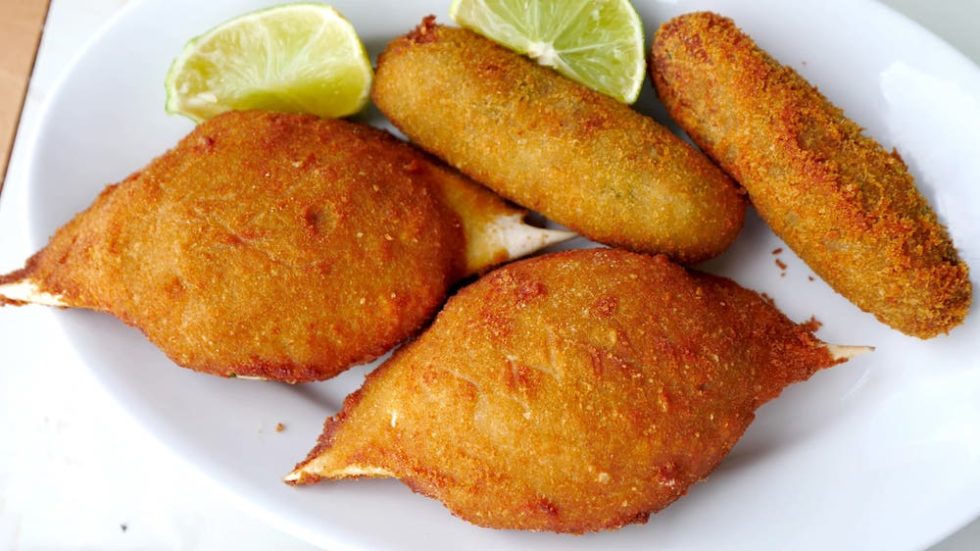 Then, they brought us more shrimp! They were so good. They were better than the others and very crispy, with a smoked flavor. You eat the shrimp whole and have to really break it down in your mouth. 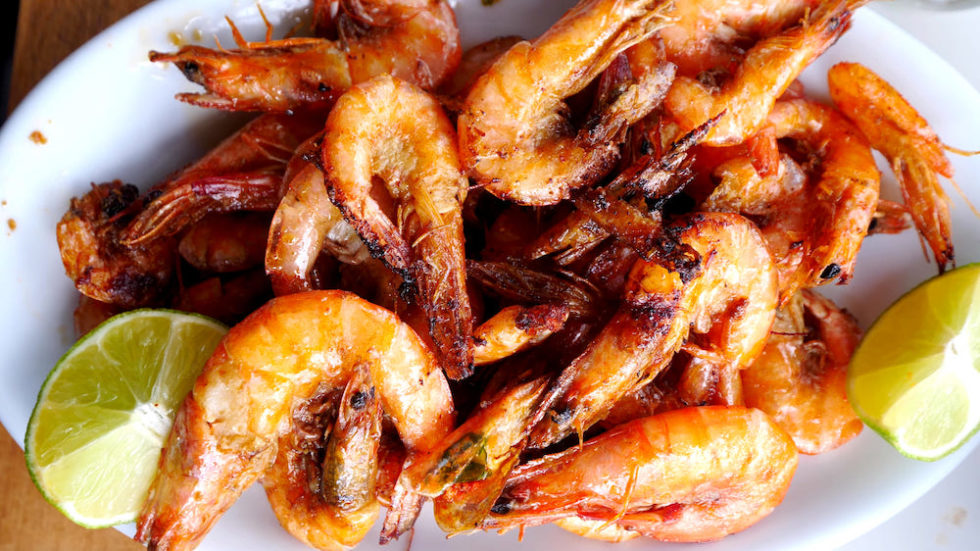 Next up were the oysters, which were massive because it was oyster season! We added some vinegar sauce to them. They were brinier than the oysters we’d been eating in Florianopolis and had a mussel-like texture. We also had some crunchy, double-fried shrimp. They were very strong and heavy! 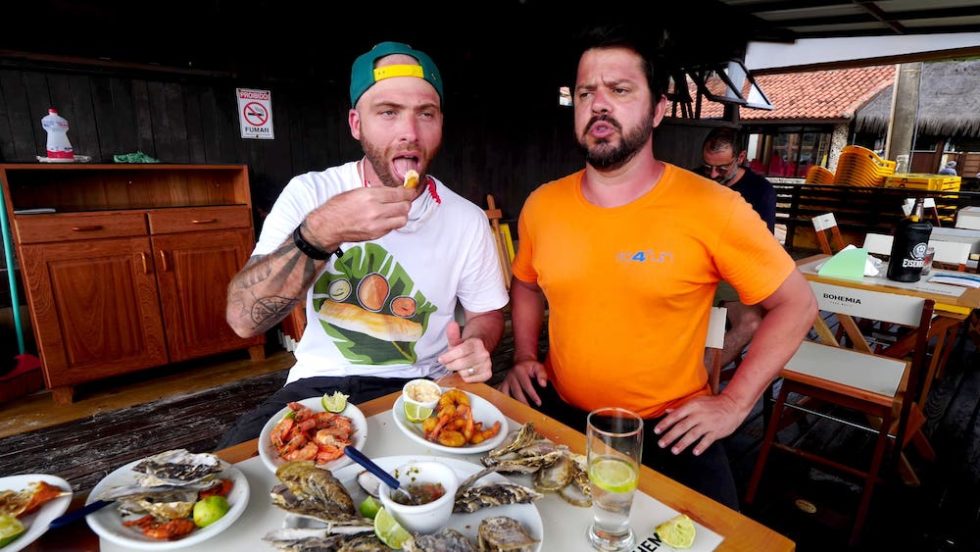 Our final dish was fish Milanese with an oily shrimp sauce on top. It was beautiful and oily and came with rice and a grits-like dish made from cassava flour. Everything looked so good, but I had to pace myself since we still had a few more restaurants to visit! 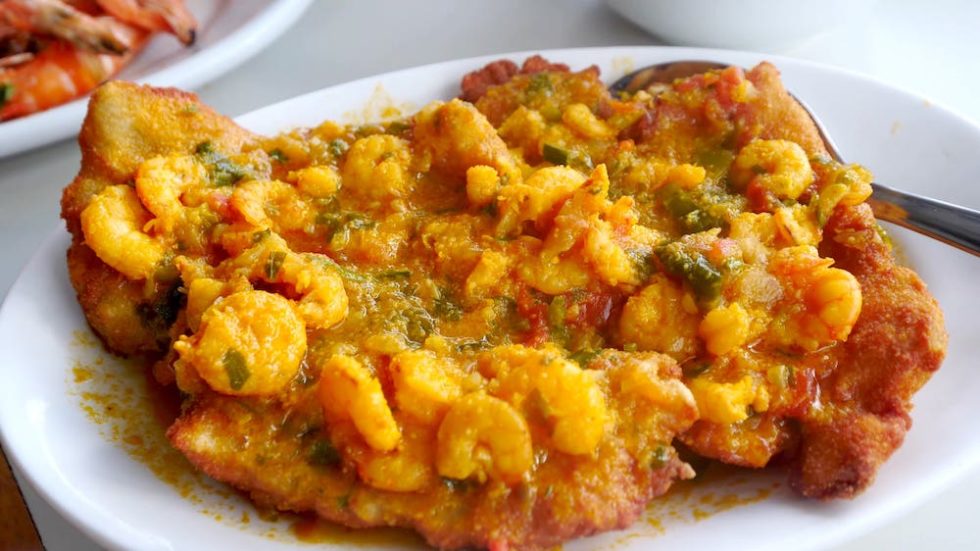 The fish was nice and white, with a lightly fried, golden brown coating. The shrimp on top were succulent and tender, and the sauce they came in was full of flavor. I loved adding the spicy sauce to it to give it an extra kick! 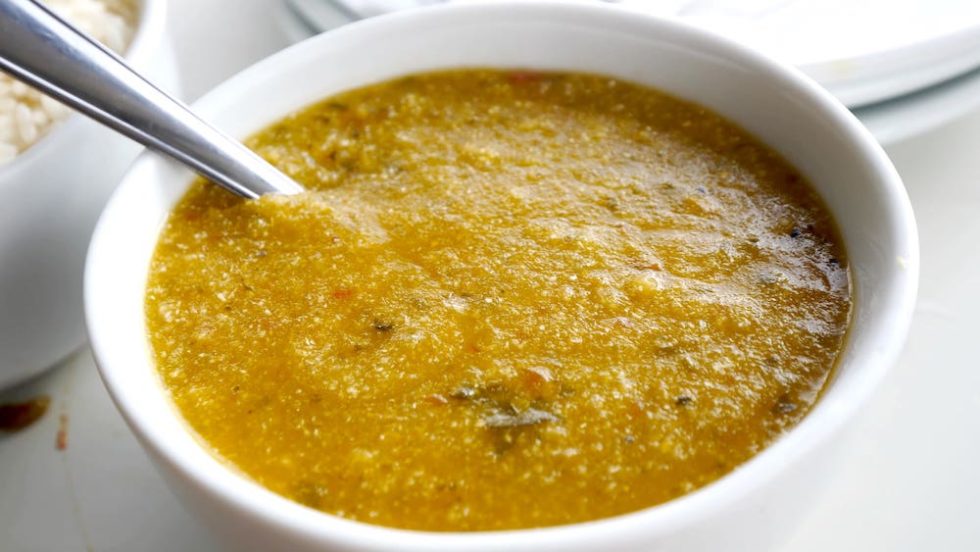 The cassava flour grits were also really tasty on top of the rice, but my favorite things were the main shrimp! 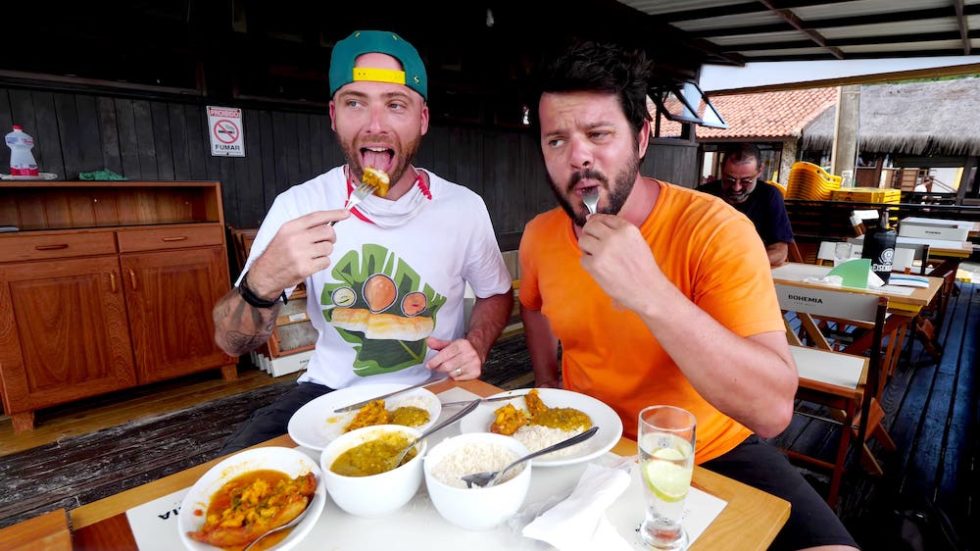 Then, we headed to the next restaurant, which is called Arante Bar. It’s just a few feet away! It’s very rustic and is known for the notes people leave on the walls and ceiling. People leave notes about what they felt about the food and service there!

Check out my VIDEO: Brazilian Seafood Paradise in the Oyster Capital of Brazil!! Oysters in Florianopolis, Brazil

Arante Bar is the oldest restaurant on the beach and is a tourist attraction! They serve local craft beer and has a cozy atmosphere and an awesome view of the beach. I ordered their only artisanal craft beer, Cartan, which is a blonde ale. It was different and tasted like a wheat ale. I loved it! The beer cost me R$29. Then, I left a note and taped it to the ceiling. 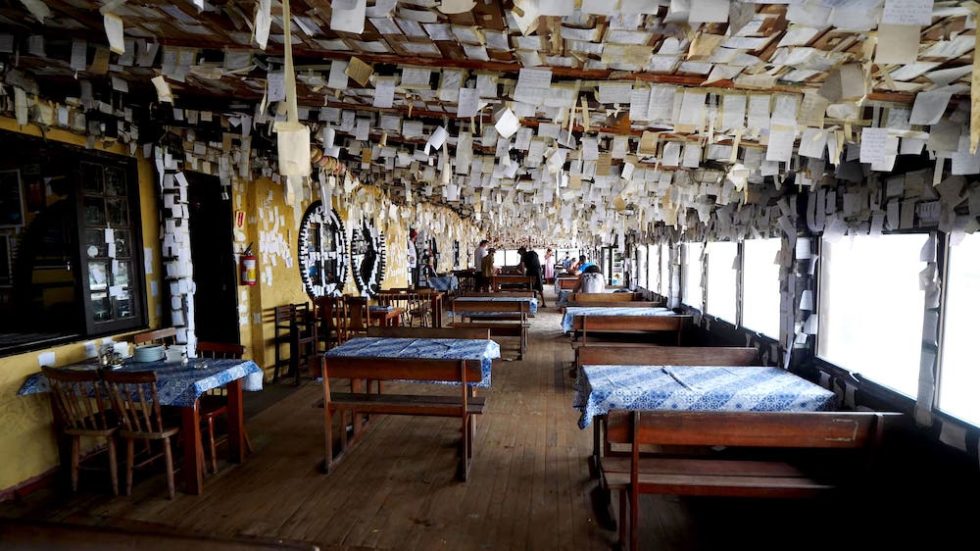 Back on the beach, the view was incredible. I wasn’t hungry, but we had a 40-minute drive ahead of us because of how big and spread-out Florianopolis is. We drove north past the amazing shoreline, businesses, and homes. There’s lots of traffic on the island. 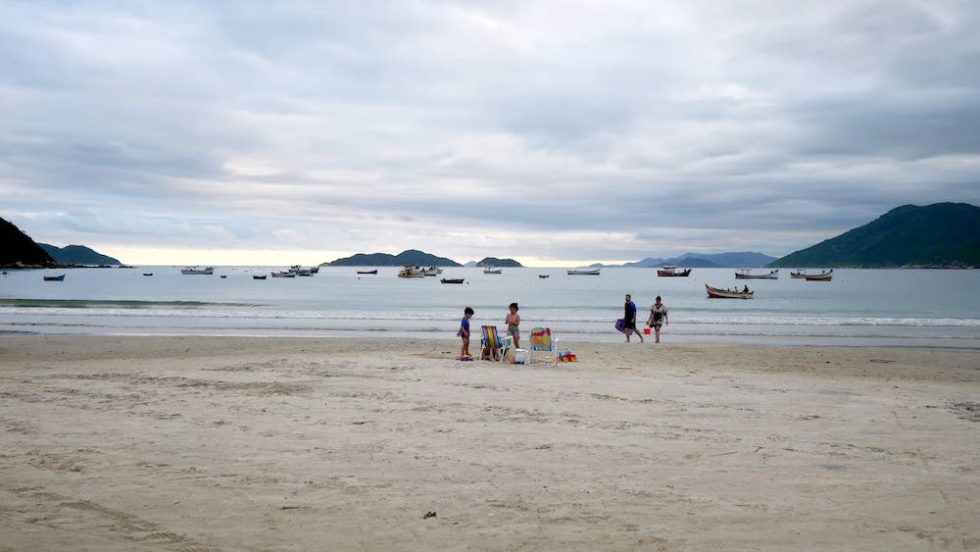 We arrived at Rancho Açoriano Restaurant, which is a beautiful Portuguese-style building with a colorful yellow, blue, and red exterior. They have indoor dining and make their own cachaca. You can also eat outside on the pier. 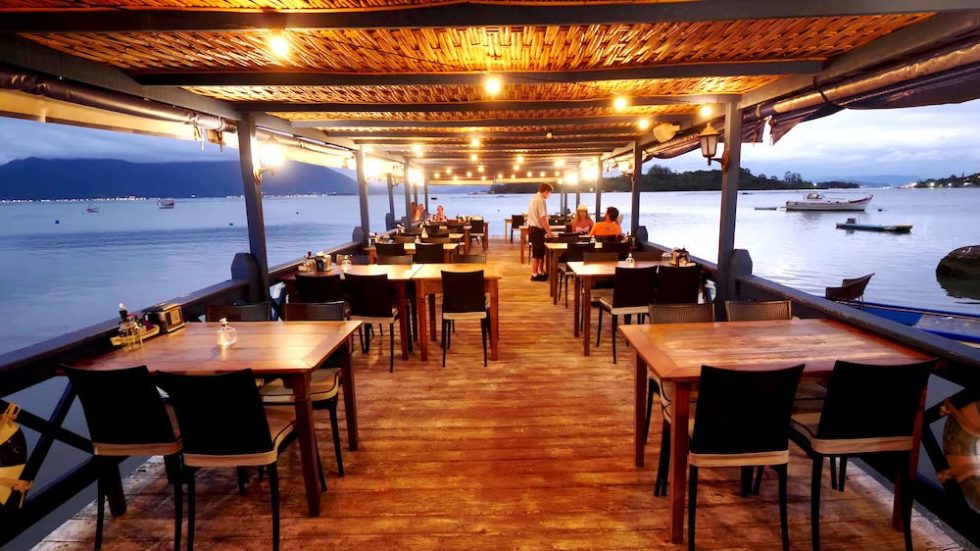 We ordered more oysters—raw, and some charbroiled with cheese. The charbroiled oysters. They’re massive and chunky and are almost like eating an oyster lasagna. They’re so meaty and full of creamy gruyere cheese! 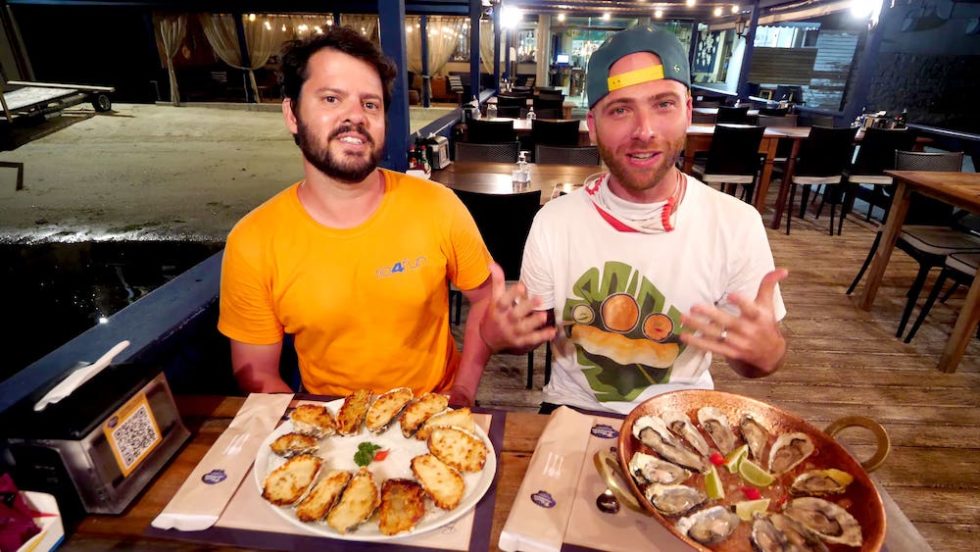 Then, we jumped on the raw oysters, which we had with some lime and Tabasco, which added some spice. You can slurp them out of the shell or eat them with a fork. I prefer raw oysters so I can taste the actual oyster.

After dinner, we stopped at a stand to get some sugarcane juice with lime and pineapple. It’s a cross between the São Paulo (lime) and Rio (pineapple) styles of sugarcane juice! It was delicious, tangy, and refreshing! 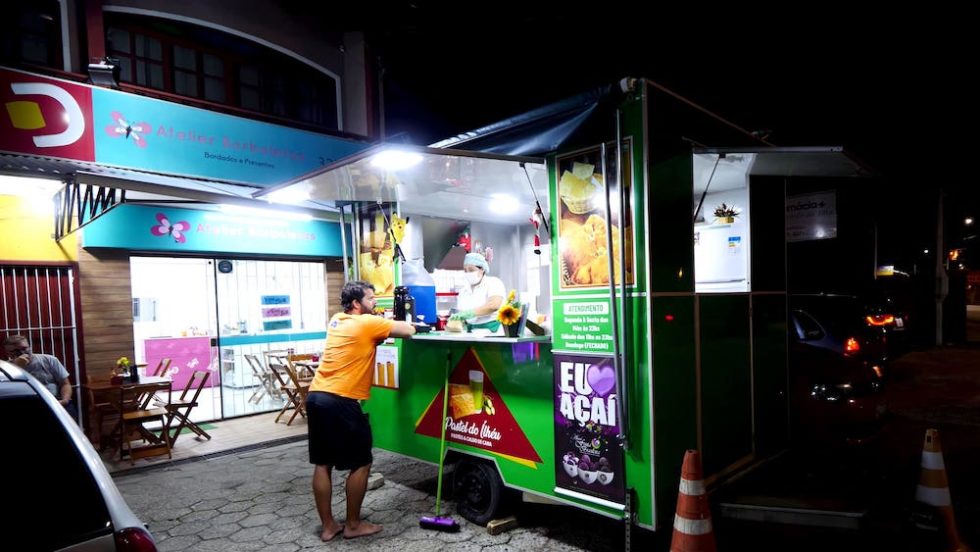 What an incredible end to my time in Florianopolis. This Brazilian seafood tour of the magic island of Florianopolis, Brazil was such a fun adventure! Huge thanks to my friends Guilherme and Rafa for showing me around this amazing island! I also must thank my friends at the Hotel Intercity Florianopolis for hosting us! 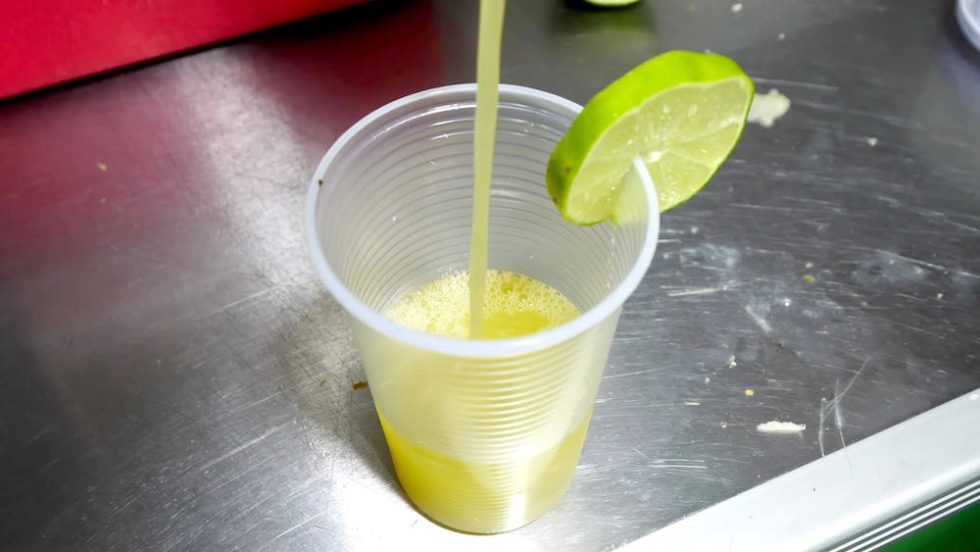 I hope you liked coming with me on my Brazilian seafood tour of the magic island of Florianopolis, Brazil! If you did, please give this video a thumbs up and leave a comment below. Also, please subscribe to my YouTube channel and click the notification bell so you don’t miss any of my travel/food adventures around the world!