My adventures in Tbilisi, the capital city of Georgia, continued with more sightseeing and a lot more phenomenal Georgian cuisine! Come with me as I try an amazing Georgian street food feast and visit a local fortress and bazaar in Tbilisi, Georgia!

My day began at 8:30 in the morning, high above Tbilisi, next to the Mother of Georgia monument. It was built in 1958 and was originally made of wood. But now it’s made of aluminum. She holds a bowl of wine in one hand (which symbolizes how Georgians welcome guests) and a sword (to symbolize Georgians’ fight for their independence). 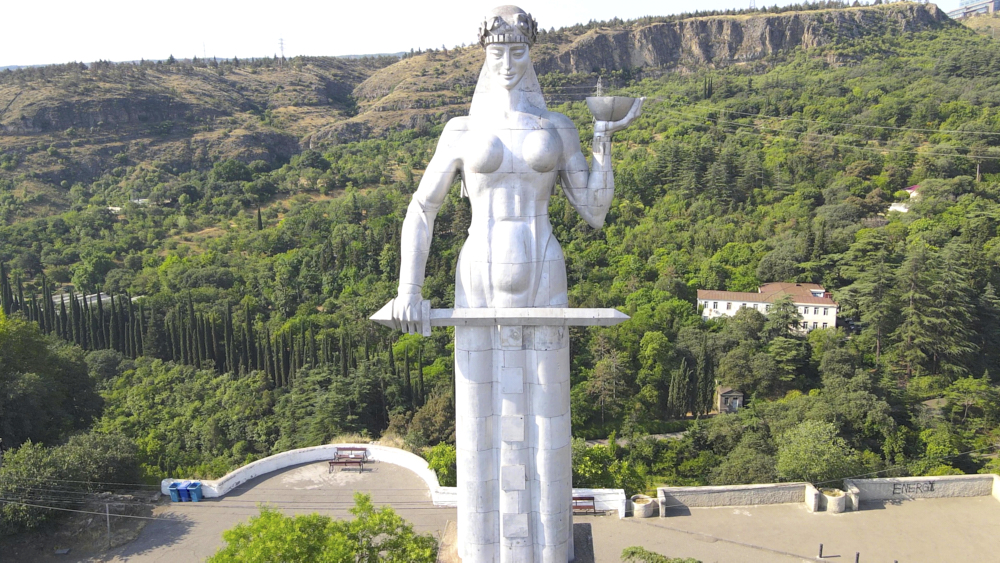 My guide Sophie from Travel Tbilisi and I continued along a path toward Narikala Fortress. There’s a funicular that takes people up there starting at 10 a.m. As we approached, I could see part of the old wall of the fortress. 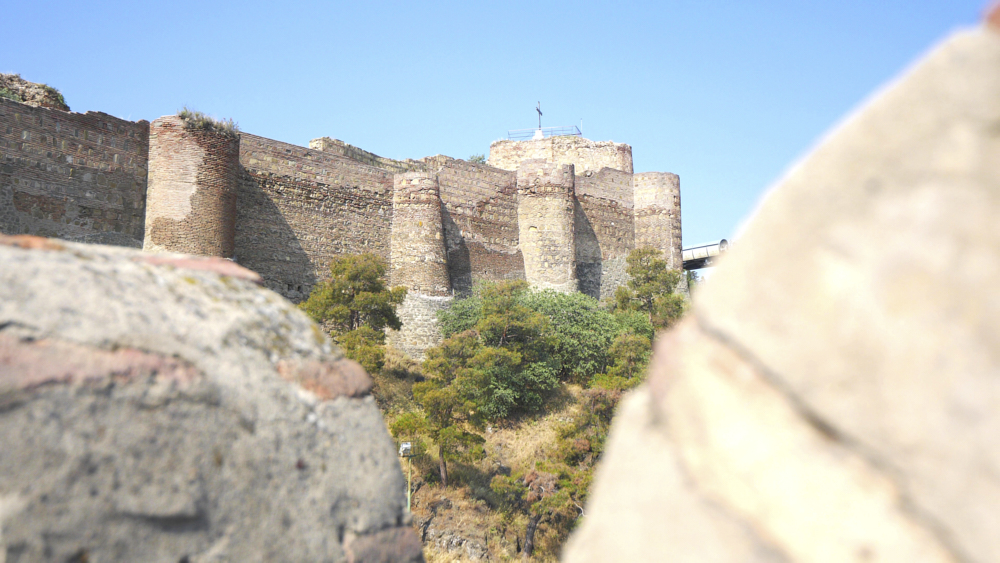 Behind the fortress are botanical gardens. You can see the citadel, and then you must take a set of stairs down in order to enter the fortress. You can take an Uber or taxi to the fortress, but I think it’s better to hike from the Mother of Georgia for the views and the experience! 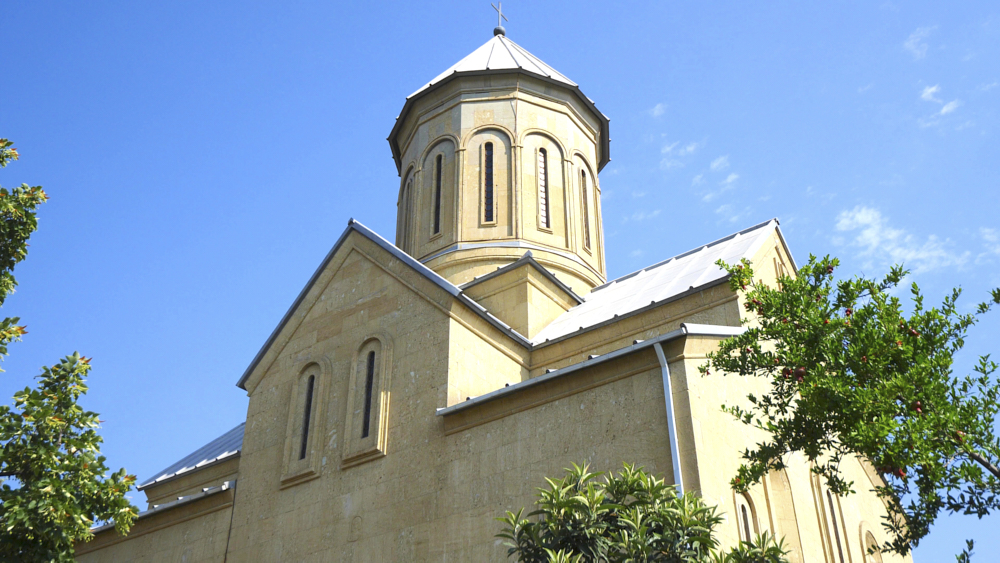 There, we saw St. Nicholas Church, which opened in 1997. There’s a steep stairway with no railing that leads up to the top of the wall, which was built in the 16th-17th century. The fortress itself dates back to the 4th century! Just be careful if you climb up there!

Then, we followed a wild, grassy path up to the citadel. You have to climb some rubble to get up to the very top. The views of the city and river from the top are epic! Be careful heading down, too! 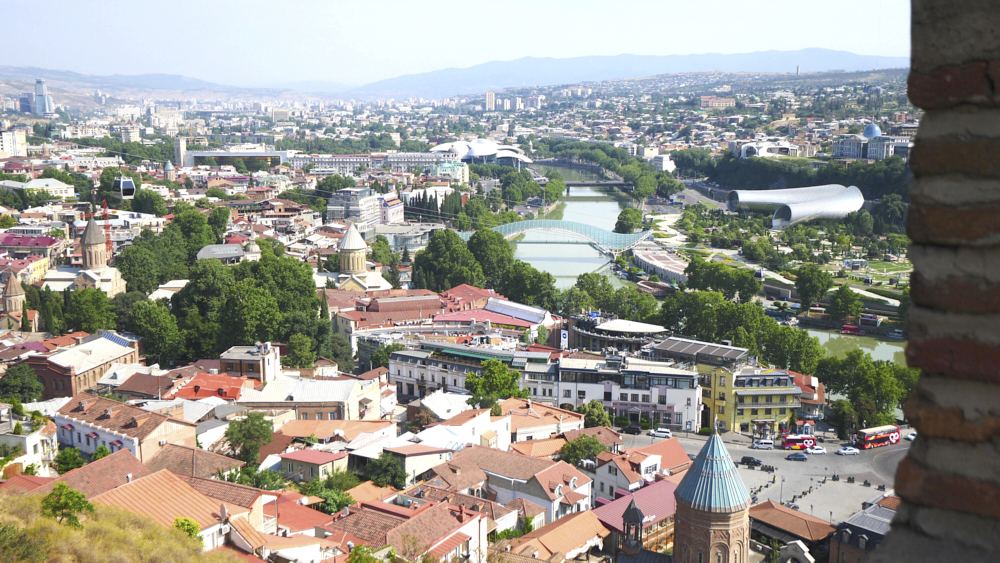 We hiked back in a circle around the citadel to the funicular. While we rode back down, we enjoyed amazing views of the city. We then headed over to Meidan Bazar, which used to be part of the Silk Road and was a primary stop for merchants at the crossroads between Europe and Asia. 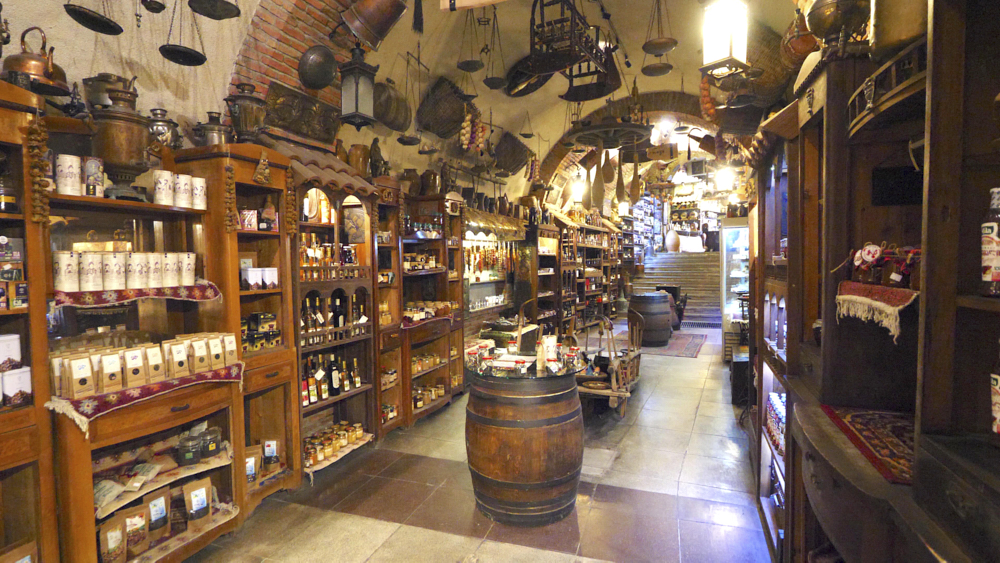 In the bazaar, I could see lots of beautiful paintings, ceramics, traditional hats, T-shirts, clothing, wine, jam, honey, tea, and more. They gave me a hat as a gift, and then the vendor let me try some Chinuri white wine, a classical-style dry and fruity wine. 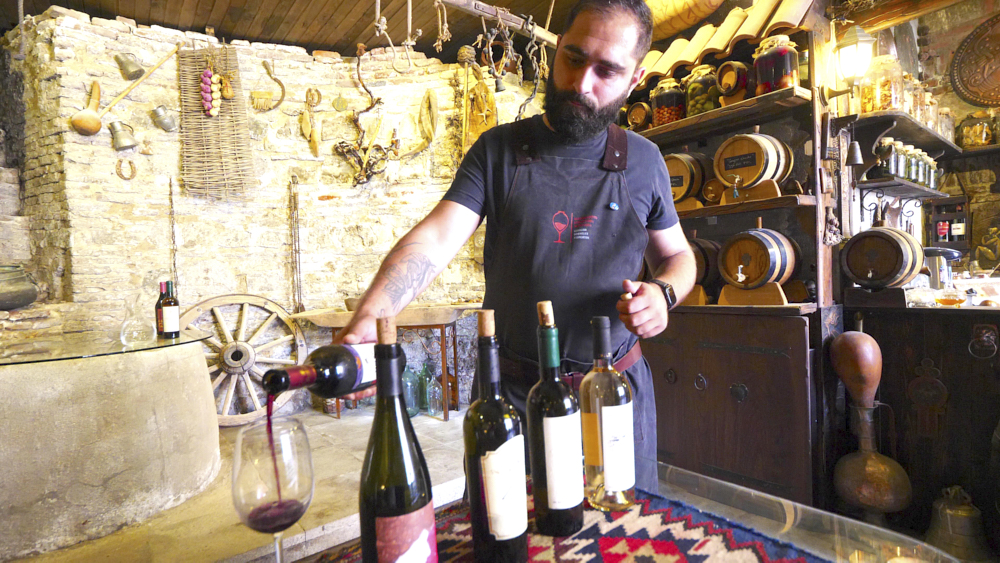 Next was Chacha, which is essentially Georgian grappa. It’s super strong! I also tried some crisp and smooth Priosmani semi-dry red wine. It smelled incredible!

Then, our street food and attractions tour in Tbilisi, Georgia continued at Tamtaki Restaurant. I was starving and couldn’t wait to eat! They aim to combine street food with high-class food. It’s fast and portable but uses high-quality, farm-to-table ingredients. 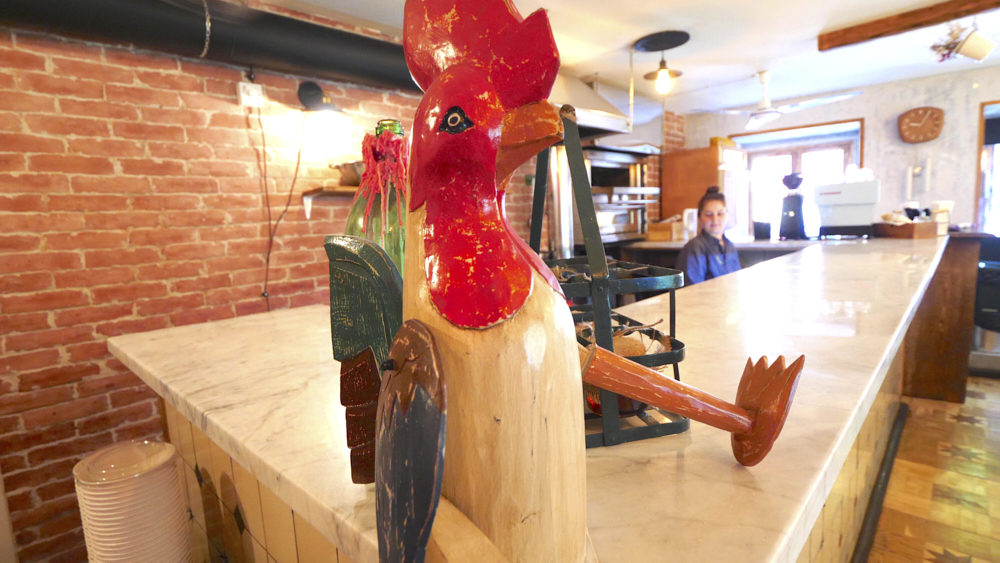 I tried some beef before I headed into their unique, Instagram-friendly bathroom, before they served me five different tamtakis, or sandwiches. They give you flatbread, which you then stuff with everything. 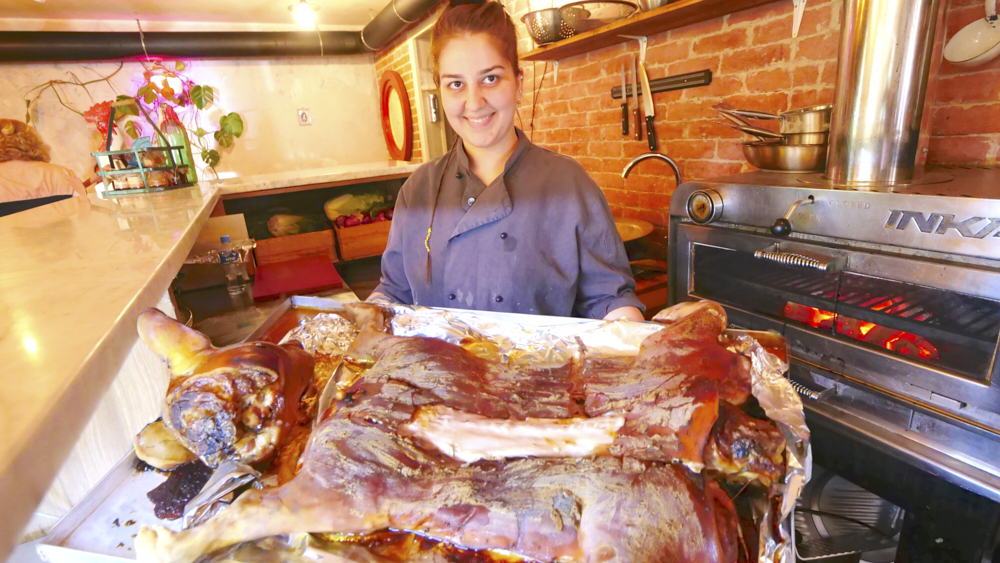 The cheese with herbs and bread was excellent. It was sulguni cheese on top and cottage cheese on the inside! I loved mixing it with the vegetables and herbs. Everything was so fresh! 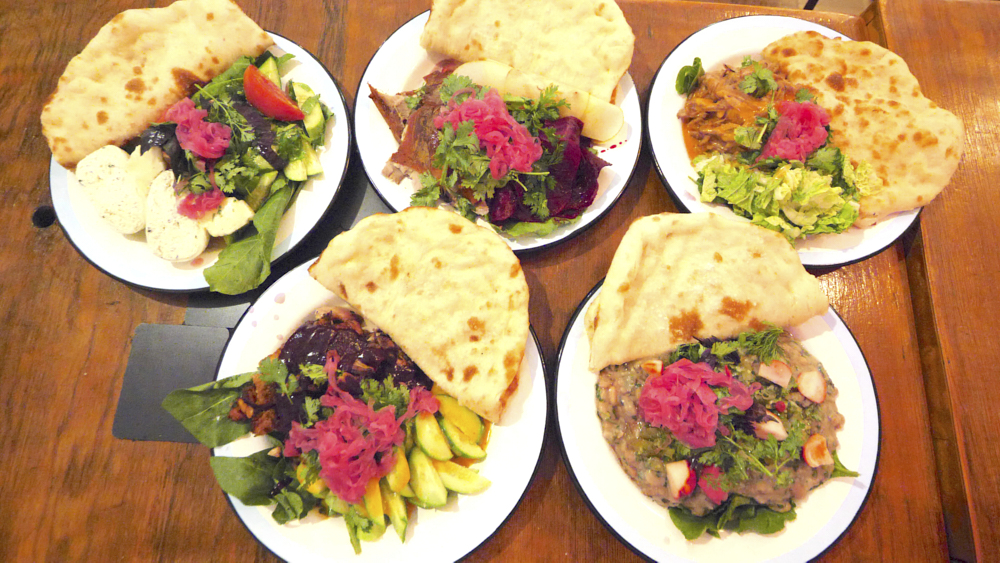 Next was chicken with blackberry sauce, which was juicy and tender. The sauce was exceptional! Every plate comes with a huge salad. 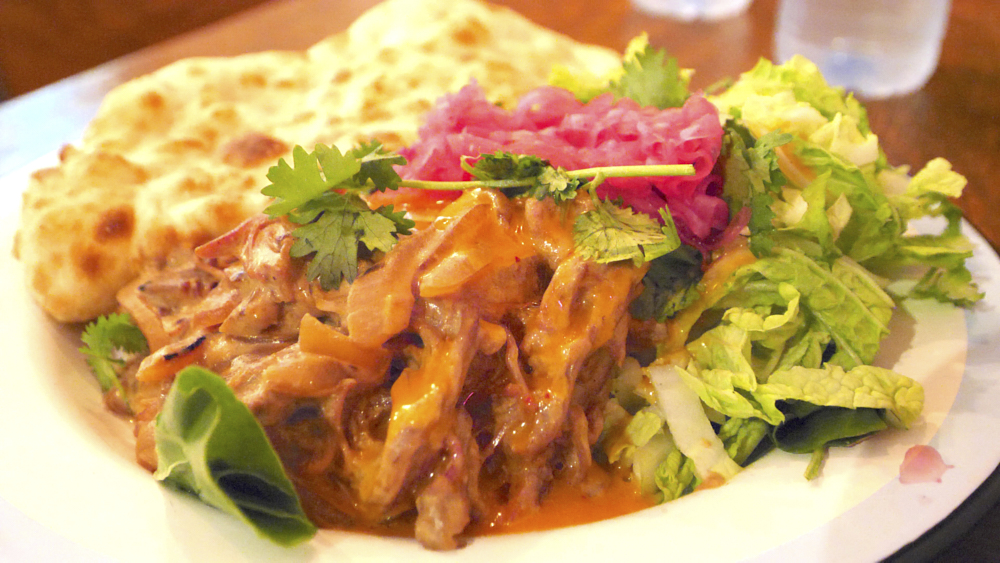 The beef came in a creamy sauce and went so well with the lettuce and caramelized onions. It was almost like a rich, decadent pasta dish! I couldn’t get over how tasty it was! 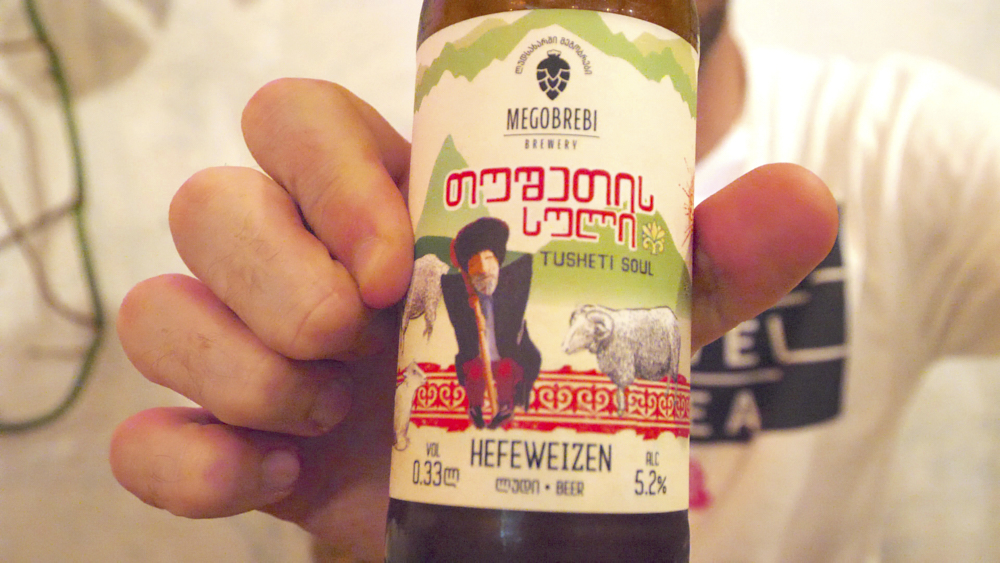 Then, I tried Tusheti Soul beer, which was a nice Hefeweizen craft beer. Then, I jumped on the white beans with herbs, which were creamy but light with a bit of a crunch from the radish.

Check out the Top 5 Things to See and Do in Gyumri, Armenia

The suckling pig with bread was juicy, fatty, and crunchy. It was my favorite one! 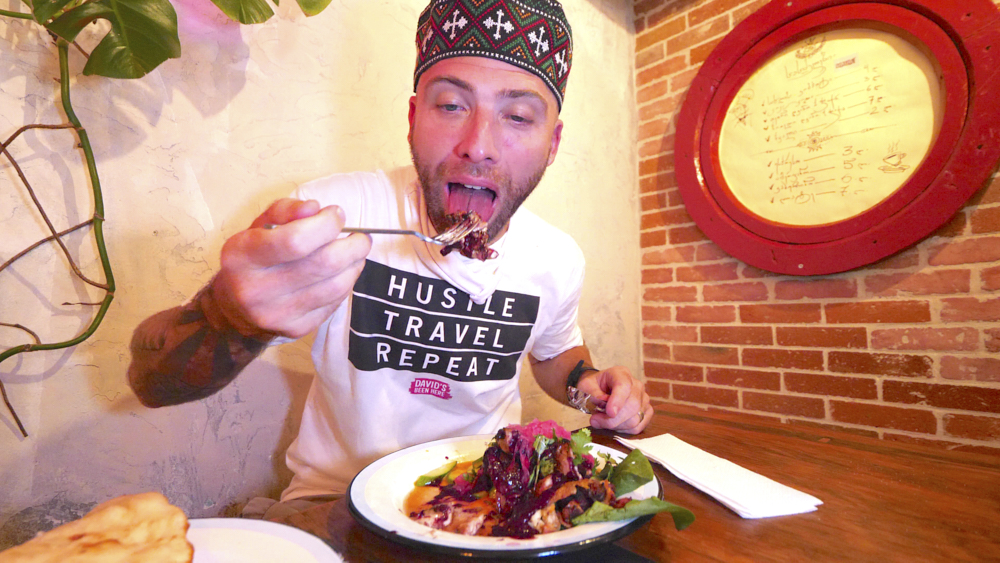 I hope you liked coming with me on my street food and attractions tour in Tbilisi, Georgia! If you did, please give this video a thumbs up and leave me a comment below. Also, please subscribe to my YouTube channel and click the notification bell so you don’t miss any of my upcoming travel/food adventures!