Bozcaada is a Turkish island in the northern part of the Aegean Sea. Formerly known as Tenedos, the island has long been the key to controlling entry to the Dardanelles Strait, which as you may know, provides direct access to Istanbul via the Sea of Marmara. In other words, anyone who wanted control over Istanbul had to first get past naval forces at Bozcaada Island. 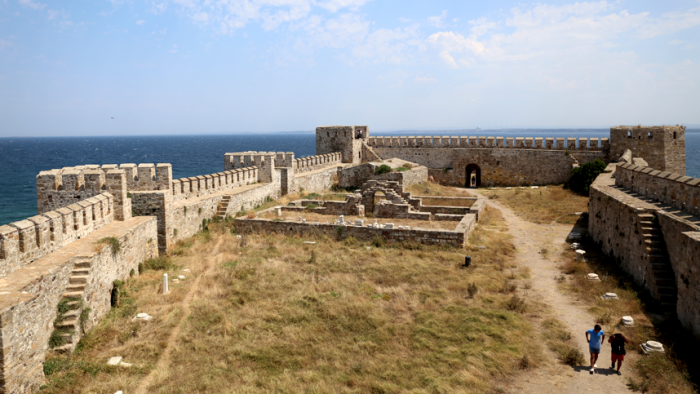 Throughout history Tenedos belonged to the Greek, Persian, Roman, and Byzantine Empires before becoming part of the Ottoman Empire in 1455. Supposedly it was here that the Trojan Horse was constructed and where the Spartans parked their ships before the surprise attack on Troy. 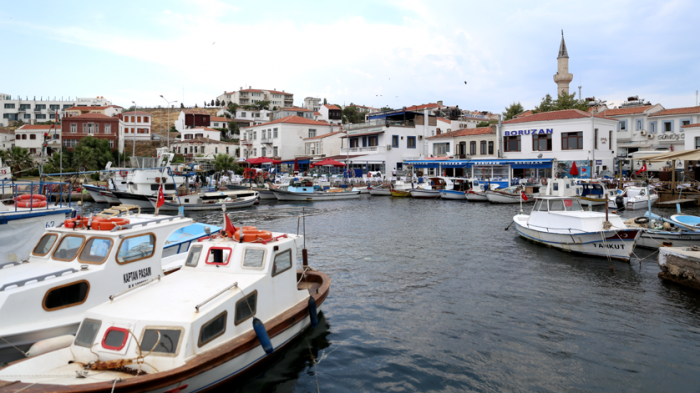 Bozcaada has an area of 38 square kilometers and a small population of approximately 2,500, but during the summer months this number can swell to well over 10,000. The island has long been a center of wine production (800 B.C.) and there is still an active viniculture. One third of the island is dedicated to growing grapes.

Bozcaada’s Greek and Turkish traditions have greatly influenced the island’s culture. Though the island’s longtime Greek residents have moved away, Bozcaada’s Greek district still retains its original street plan and traditional Greek homes. The Turkish district has a completely different look and feel with beautiful mosques, narrow streets, fountains, and hammams. Life in Bozcaada is simple and serene, which makes the island the perfect escape for a little R&R. 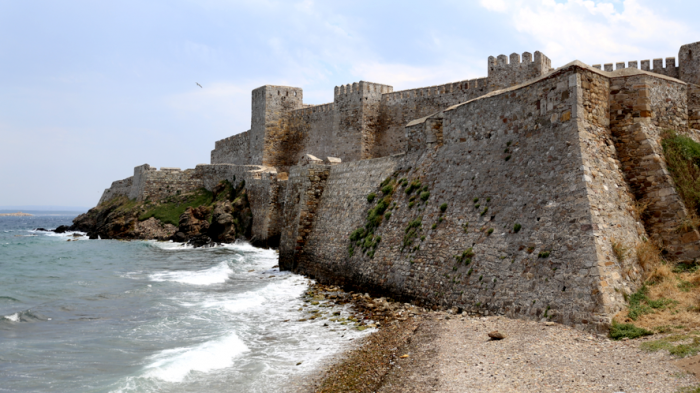 Visit the Castle: As you approach the island you will see the Bozcaada Castle. Built atop the ruins of several former castles, the Bozcaada Castle dominates the northeastern end of the island. The current structure was built during the reign of Mahmut II. Once inside, you can climb up the walls for excellent views of the marina and town center. Bozcaada Castle is open every day.

Go Swimming: Ayazma and Habbele are the most popular beaches, but Bozcaada’s coastline is dotted with secluded coves and virgin beaches. Adventurous travelers should pack their own supplies and claim a spot all their own. Bozcaada is known to have strong winds, so be aware of which direction the wind is blowing then choose a beach accordingly. 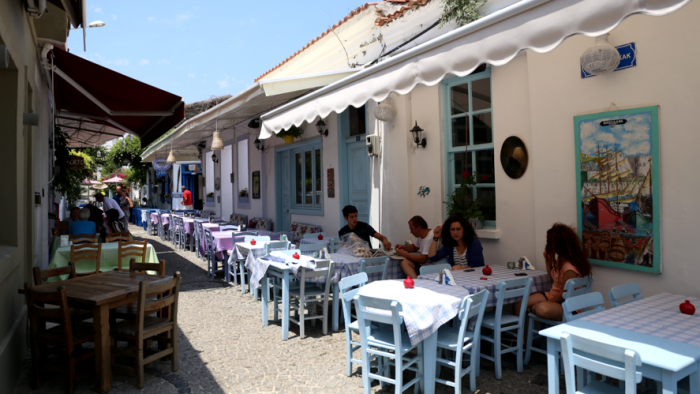 Meander the Streets: Simply walking around the town center will reveal a distinct blend of Greek and Turkish influences. The old Greek district has a clock tower and church, and the old tavernas have been transformed into modern restaurants. The old houses have been repurposed into charming cafés and boutique guesthouses. You could easily see the town center in an hour’s time. 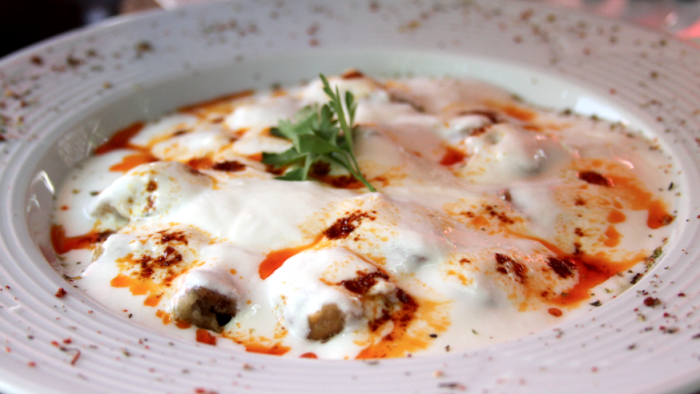 Eat: Try some of the amazing local food! Olive oil, tomatoes, figs, fresh herbs, beef, rabbit, and seafood comprise the local diet. The island’s gastronomy reflects the culinary traditions of 500 years of Turkish-Greek cohabitation. To sample some of the island’s specialties, head to Eski Kahve Restaurant in the town center. Eski Kahve specializes in homemade dishes and fresh pastries. Sit under the shaded veranda and order some of Yahya Göztepe’s refreshing signature grape juice. We also recommend the traditional stuffed ravioli as a main course. It’s divine! 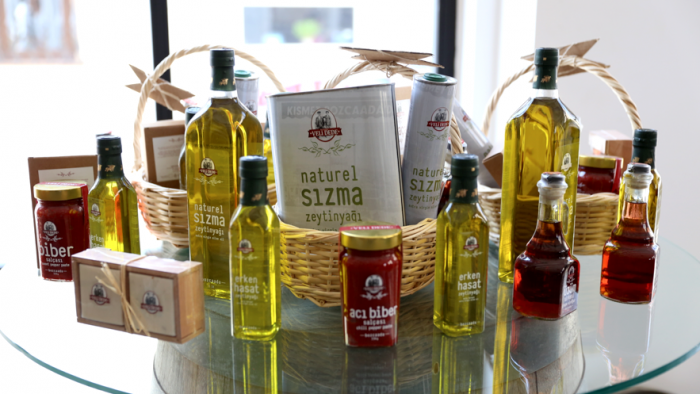 Shop: To sample or purchase some local wine, take a tour of one of the six local wineries (Amadeus, Ataol, Corvus, Gülerada, Talay, or Yunatçılar). For local products, the Veli Dede Shop has a great selection of homemade jams, olive oil, cheese, tomato paste, and more. Local artisans set up tents near the ferry terminal where you can find spices, honey, rose water, jams, and souvenirs.

Other activities include: Ayazma Monastery, the windmills on the west side of the island, watching the sunset from Göztepe hill, and learning about the island’s history at the Bozcaada Museum in the town center.

How to Get to Bozcaada 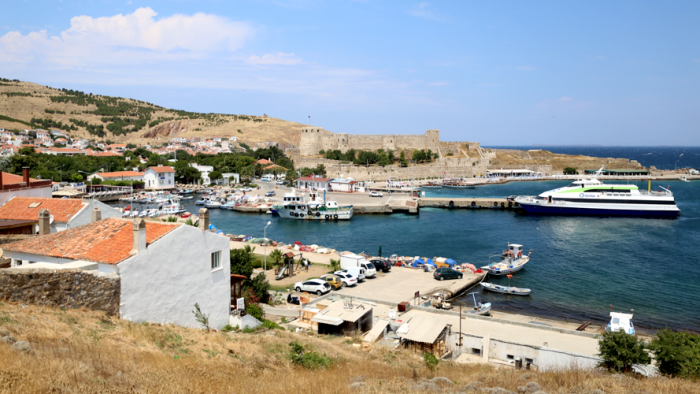 It is located about five kilometers from the Turkish mainland and is only accessible by ferry. Ferries depart from Geyikli and Çanakkale daily. The Geyikli ferry does not require pre-booking and vehicles are permitted. The ferry from Çanakkale is for passengers only and requires pre-booking at least 24 hours in advance. You could also take a ferry from Istanbul, which takes about 8 hours. 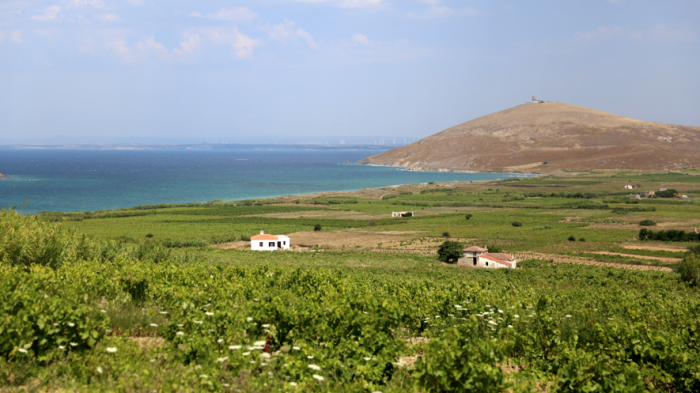 If you find yourself in Turkey and you’re craving a taste of island life, make time for Bozcaada. Its family-friendly atmosphere and casual vibe make it ideal for a fuss-free weekend holiday. There are several bed and breakfasts on the island, as well as restaurants, supermarkets, shops, and an array of beautiful beaches. Whether you come for the day or two, you will find Bozcaada to be an enchanting escape from mainland Turkey.

Have anything to add or ask about our guide to Bozcaada Island? We welcome your feedback! Please leave a comment below.

A special thanks to Go Turkey for their support.

3 thoughts on “Guide to Bozcaada Island: What To See and Do”