When I first visited the eastern European and western Asian country of Turkey in 2006, my taste buds went crazy for its cuisine. To this day, my mouth waters if I even get a whiff of the distinctive Turkish spices and dishes I fell in love with all those years ago. That includes the local dish called lahmacun, which originated from an area of southeastern Turkey known for its spicy kebabs and meat. It is one of the tastiest dishes I ate in Turkey, but what exactly is it? Here, I’ll show you how to make lahmacun, also known as Turkish pizza! 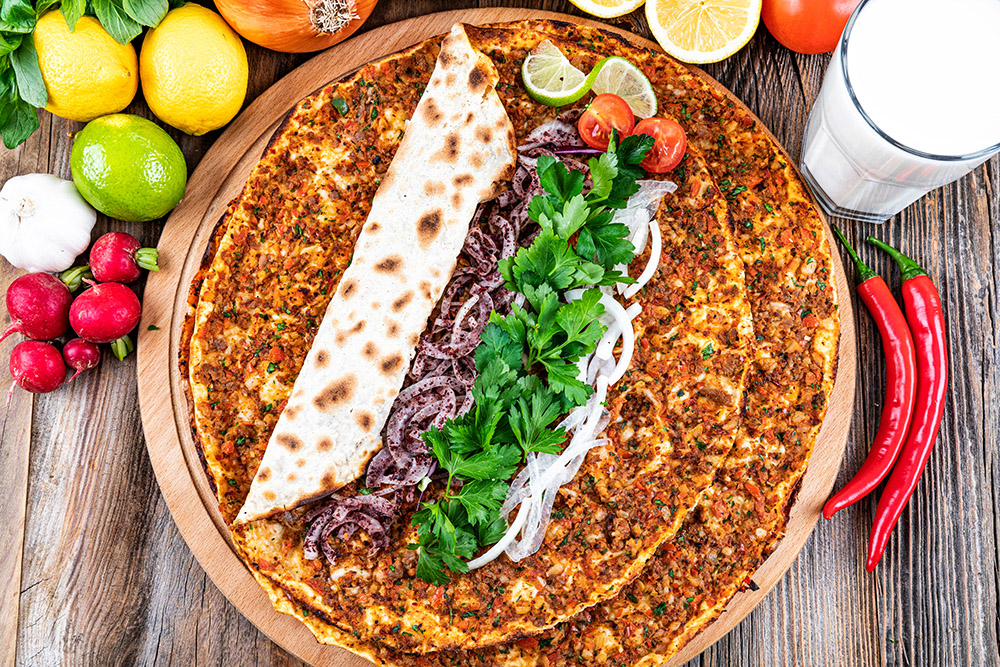 There’s a reason why lahmacun is sometimes called “Turkish pizza.” It looks like one! This popular flatbread dish consists of a thin dough, which is topped with a ground lamb or beef mixture containing spices, tomatoes and onions, and various other herbs and spices that vary by region. The herbs and spices used can include arugula, parsley, cumin, paprika, and cinnamon. In cities like Mardin and Şanlıurfa, they use onions, while other cities like Kahramanmaraş add garlic. In recent years, some have even started adding cheese to their lahmacun, making the dish resemble traditional pizza even more closely.

Lahmacun’s origins date back at least 5,000 years to the days of Ancient Babylon, where historical records say the dish was initially made with bread. As time passed, the meat mixture thickened, while the dough became thinner, resulting in the flatbread dish I know and love today.

How to Make Lahmacun, a.k.a. Turkish Pizza 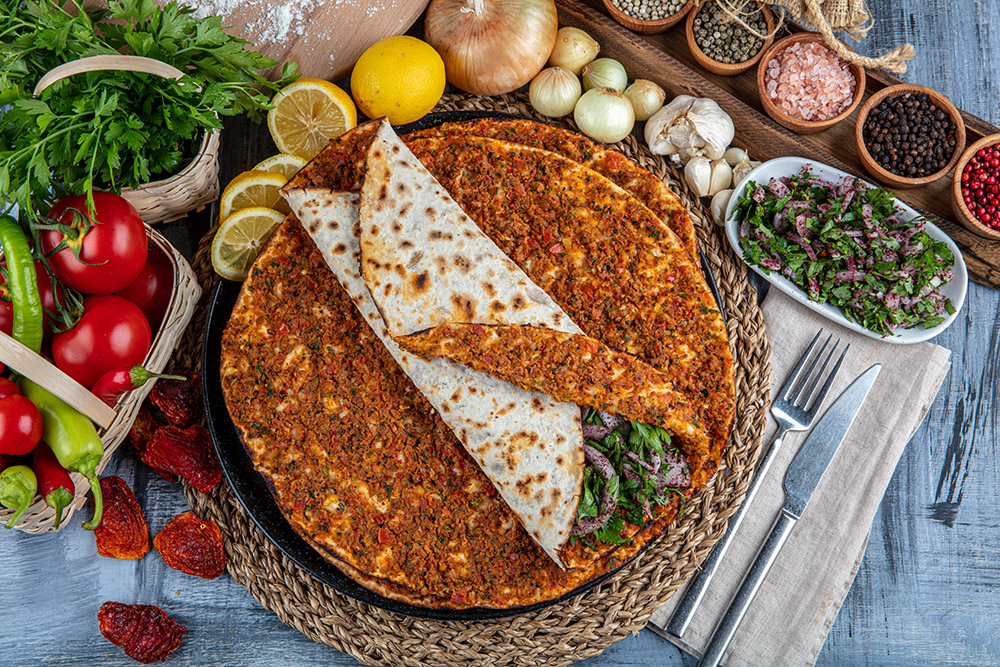 If you’d like to prepare lahmacun at home, I have the perfect recipe for you. It serves five to six people, so it’s a great way to share your love of Turkish cuisine with your friends and family.

Start with these ingredients for the meat mixture:

A teaspoon of powdered or flaked red pepper. I like the hot variety.

For the dough, you’ll need:

A pinch of sugar 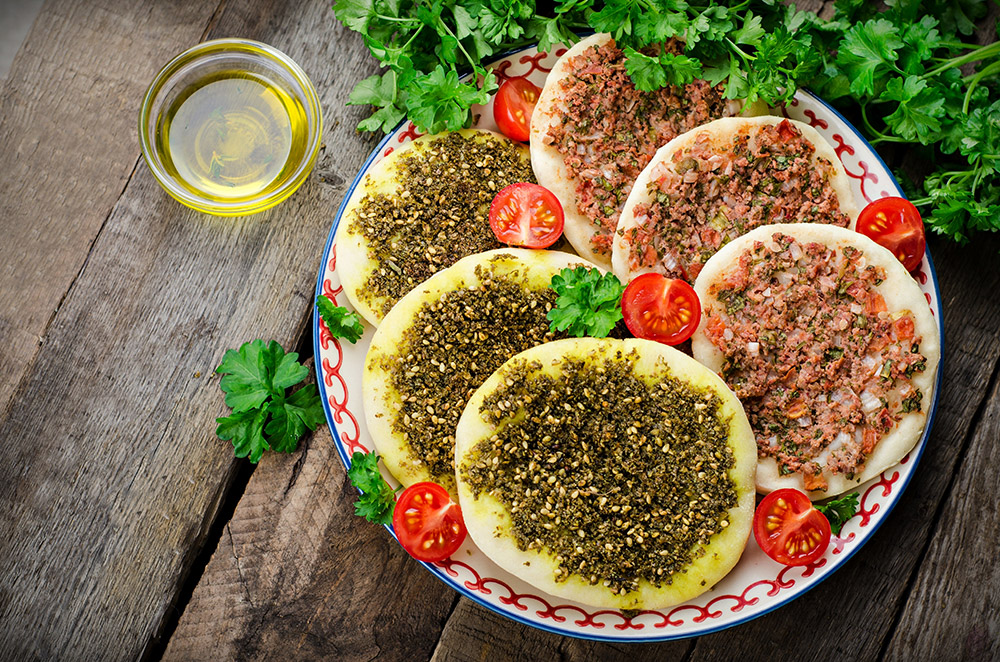 Gradually add the water to the flour and knead it with your hands, making sure to add the salt and sugar to the dough in the process. Once it has reached the proper consistency, let it rest. Twenty-four hours is optimal, but if you’re crunched for time, 3-4 hours is fine.

While your dough rests, work on building the lahmacun mixture. Begin browning your meat. Then, add the tomatoes and onions, followed by the paprika and tomato pastes, and finally, the black pepper, red pepper, and parsley. It will cook down to a loose lahmacun mixture.

Roll your dough into roughly one-ounce balls. Flour your countertop and roller and roll them out into circles until they are roughly 20-25 centimeters in diameter. After you do this, set your oven to 480°F, or about 250°C. Then, you’ll want to distribute the lahmacun mixture evenly but generously on top of your dough circles. Flour your baking tray well so your lahmacuns don’t stick and place them in the oven once it has been properly pre-heated. Remove your lahmacuns from the oven after 6 to 8 minutes. Let it cool and then eat it like a pizza or as a wrap!

And there you have it! That is how you make lahmacun, also known as Turkish pizza! Share the mouthwatering flavors of Turkey with your family and friends…or keep it all for yourself because it’s just that good! 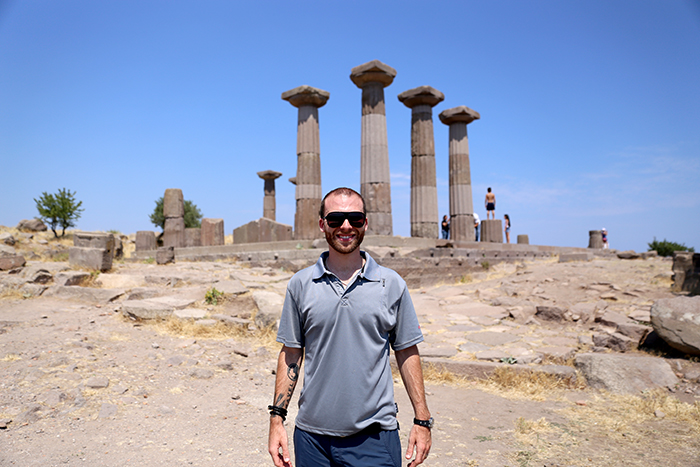 The country of Turkey lies at the crossroads between Europe and Asia, and is a distinct melting pot of cultures that range from European to Asian to Middle Eastern. With such a unique blend of cultures, it’s no wonder it’s a gastronomical paradise that 40 million people from around the world visited in 2019. And with its gorgeous natural environments, rich history, well-known ancient sites, and world-famous markets, it’s also the perfect place for any curious traveler to explore. Book a trip to Istanbul today to begin your Turkish adventure!