When choosing between Ayutthaya, Sukhothai, and Lopburi, there are many factors to consider. All three are remnants of Siamese cities filled with fascinating Buddhist and ancient Thai ruins. Ayutthaya and Sukhothai both served as capital cities of Siam and are inscribed on the UNESCO World Heritage List for their cultural and historical significance.

Lopburi is one of the oldest inhabited cities of Thailand and currently serves as capital city of the Lopburi province. It is known for its many ancient Thai ruins, most of which have gone basically unrestored. Lopburi’s resident monkeys are the main reason for tourists stopping here. 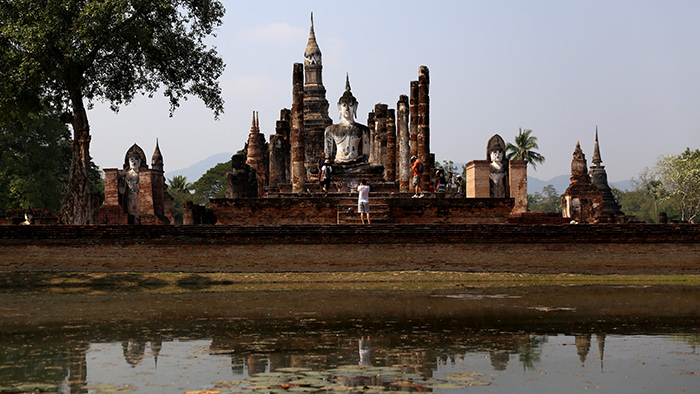 If your time in Thailand is limited, here is some information on all three to help you decide which ancient Thai ruins to make time for.

Ayutthaya is a historical park containing hundreds of ruins dating back to the 13th through 18th centuries. At the height of its power, the Ayutthaya Kingdom was one of the largest and wealthiest in Asia. The kings of the Ayutthaya Kingdom ruled with absolute power over a Buddhist society. WATCH VIDEO: A Visit to the Ancient Kingdom of Ayutthaya 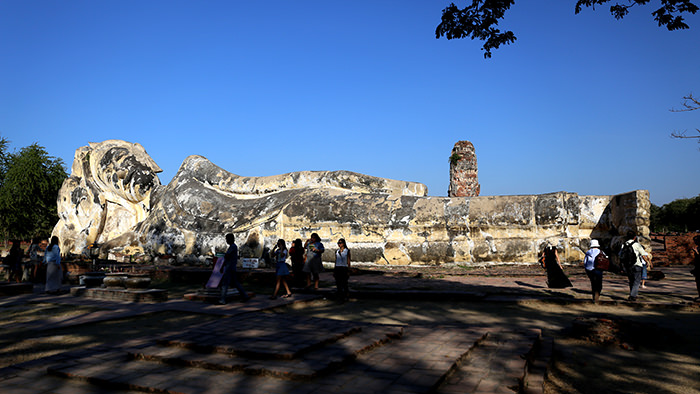 After 50 years of bloody struggles against the Burmese, Ayutthaya was eventually overtaken in 1765 by an army of over 40,000 Burmese soldiers. They pillaged, burned, and looted the sacred temples, shrines, and monasteries. Nowadays the Ayutthaya Historical Park is where the unearthed ruins are held.

Among the buildings are impressive structures such as Wat Phra Ram Temple, Wat Chaiwatthanaram monastery, and Wat Phra Si Sanphet. There is also a beautiful Buddha head statue enveloped in tree roots behind the Mahathat Temple. 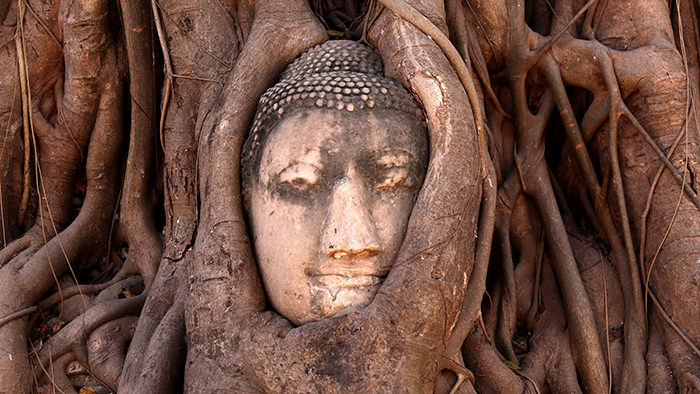 The Ayutthaya Historical Park is an hour drive from Bangkok, which makes it a great day trip option. Admission is 50 Baht, but there are several temples inside with their own entrance fees. It is an additional 20 Baht for a booklet with information about each temple and the royal palace. The park is fairly close to the city, so there will be car and motorbike traffic to contend with while exploring. Since it is such a popular day trip from Bangkok, try to arrive as early as possible to avoid the crowds and the afternoon heat. 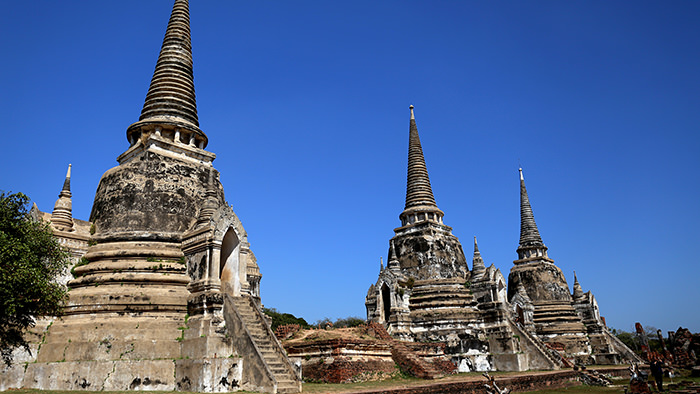 Unlike Ayutthaya, Sukhothai is too far away to be a day trip from Bangkok (five-hour drive), but it is an incredible UNESCO site nonetheless. It was the first ancient capital of the kingdom of Siam from 1238 to 1438. Sukothai Historical Park is quite easy to navigate on foot or by bicycle since the majority of the ruins are held within a rectangular walled complex. 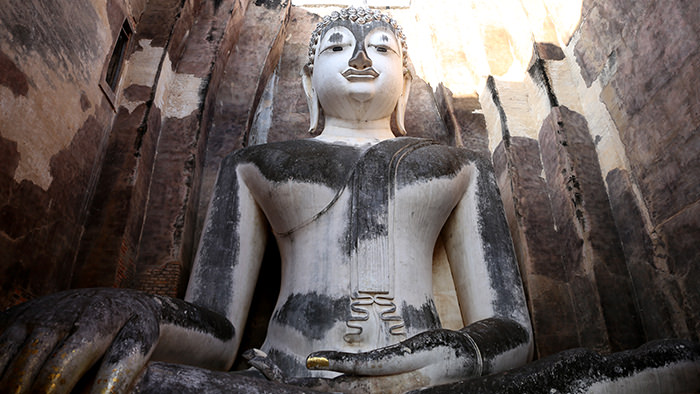 Sukhothai literally translates into “Dawn of Happiness.” What remains of the great capital today are the ruins of the royal palace and 26 temples. The largest of these is Wat Mahathat, which served as the city’s main temple and shrine to several relics of the Buddha. Just west of Wat Mahathat is Wat Si Sawai; a temple with unique Hindu architectural features reminiscent of the temples in Angkor Wat, Cambodia. Perhaps the most impressive structure in Sukhothai is the giant seated Buddha in the Wat Si Chum temple. It stands 15 meters tall and is 11 meters wide. An extra fee must be paid to visit Wat Si Chum temple, but it is well worth it to get to see the giant white Buddha! 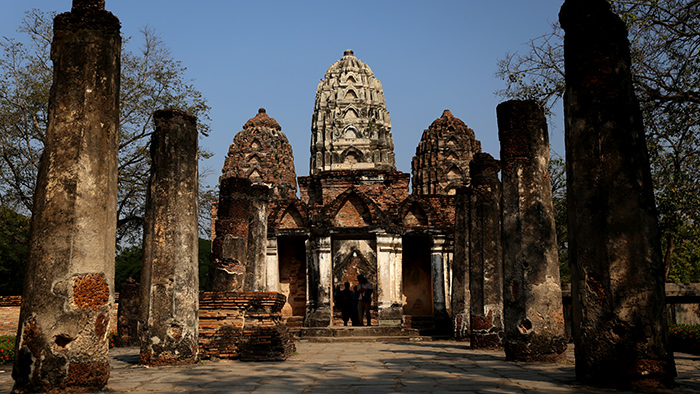 Visiting Sukothai has an added bonus; it is just 68 kilometers from its sister city and fellow UNESCO World Heritage Site, Si Satchanalai Historical Park, which contains over 270 historical monuments, temples, and Buddha statues. Of these, Wat Chang Lom is particularly striking because its base is surrounded by large elephant sculptures (pictured below). The park itself is well maintained and easy to get around on foot. Admission to Si Satchanalai Historical Park is 100 Baht. 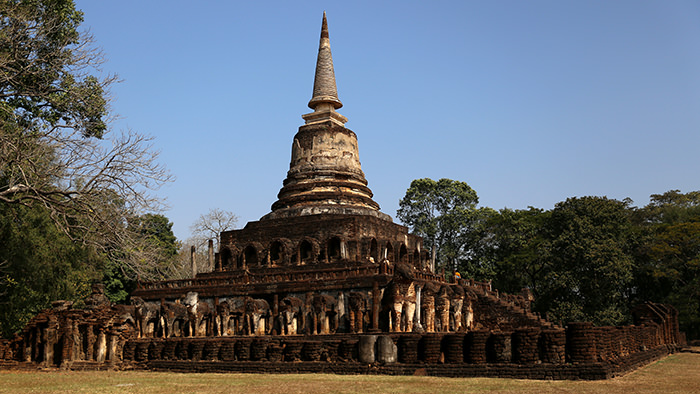 Sukhothai has several intact and restored Buddha statues, and its position away from the traffic of the city center makes it easy to get around. There are also several casual restaurants and ice cream shops along the perimeter of the complex. Admission is 100 Baht, but it will cost a bit more if you plan on seeing all the temples. 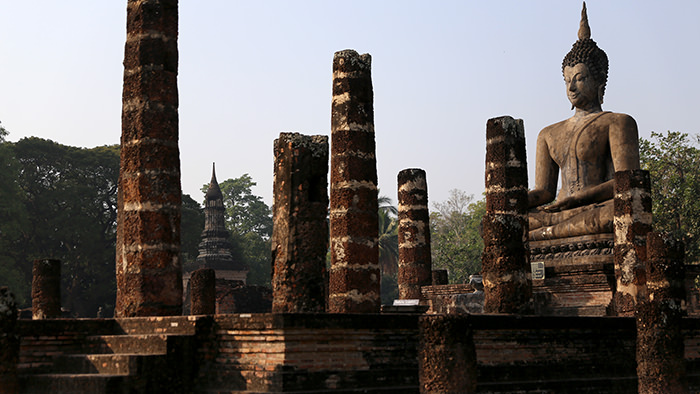 Aptly nicknamed “the city of monkeys,” Lopburi is a historically significant city located about three hours north of Bangkok. It is one of the oldest inhabited cities in Thailand, having served as the second capital of the Ayutthaya Kingdom during the sixth century A.D. Before that Lopburi was one of the westernmost cities of the Angkor Empire, now known as Cambodia. WATCH VIDEO: Exploring the Monkey Temple of Lopburi 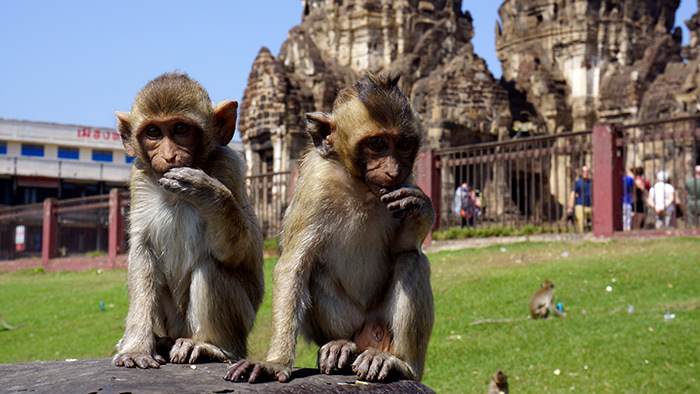 Lopburi, which is also known as Lavo, Lavapura, and Luovo, is divided into the old town and new town. Most of the ruins are scattered among modern buildings near the train station in the old town. Lopburi is a popular tourist attraction because of its resident crab-eating macaques that have practically infested the old town. Whether you love them or you hate them, these mischievous monkeys have the run of the town. 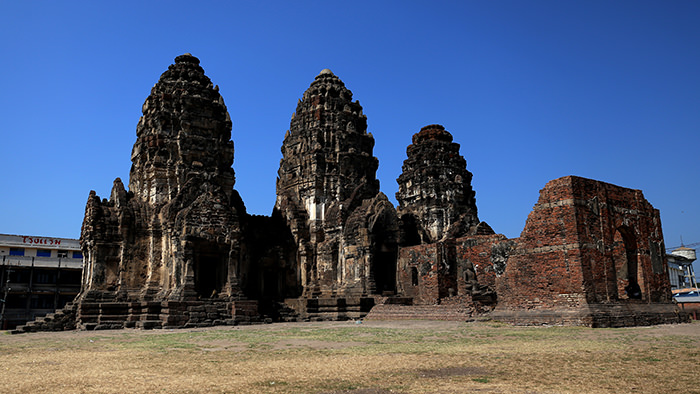 Near the train station is the famed Phra Prang Sam Yot Temple, or “Monkey Temple.” It is a beautiful example of architecture from the Angkor, or Khmer, Empire.

It is possible to make this a day trip from Bangkok, but you may be rushed since you’ll have to go three hours in each direction. Many people visit Lopburi as a day trip from Ayutthaya. The macaques are not fearful of humans. They are curious and can become very aggressive when food is around. Do not leave your belongings unattended or let them climb on you. They will try to take your sunglasses, jewelry, and even your admission ticket to the Monkey Temple like they did to me! Admission to Phra Prang Sam Yot Temple, or “Monkey Temple” is 150 Baht. The majority of the ruins are in and around the old town. Walking is the best way to see them, but be warned: the heat can be quite intense. 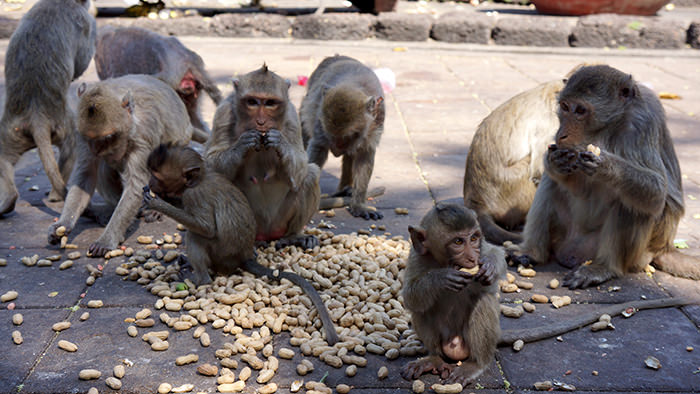 Which of the Ancient Ruins Should You See?

It really depends on how much time you have in Thailand. If you don’t plan on heading to central or northern Thailand and you have a day to spare in Bangkok, definitely try to make a day trip to Ayutthaya. 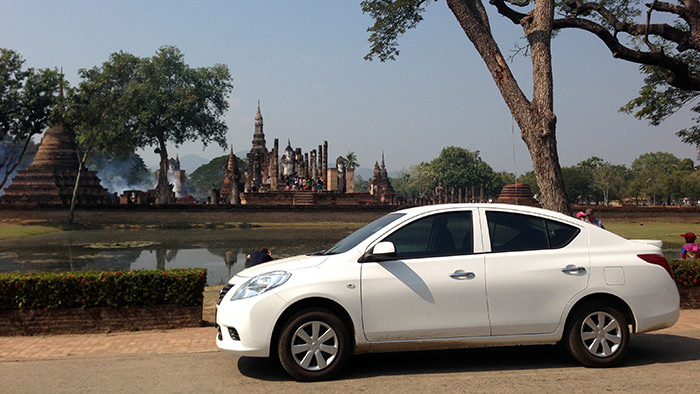 If you are road-tripping in Thailand (like we did thanks to Thai Rent a Car), you could drive from Bangkok to Sukhothai with a stop in Lopburi. You would need a car to visit nearby Si Satchanalai, which could work out nicely. We recommend spending a night in Sukhothai so you could have a full day to see the ruins. A great hotel option very close to the entrance of the park is the Le Charme Sukhothai Resort. The hotel itself is quiet, clean, and has a good restaurant on premises. It also has a beautiful lotus pond in the center (see below). 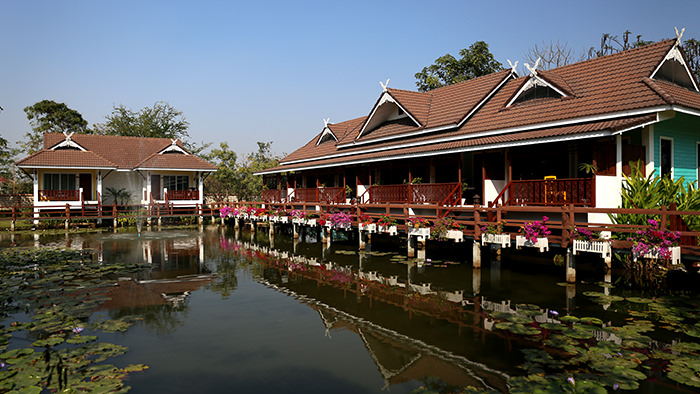 If we had to choose just one of the ancient Thai ruins to visit, it would definitely be Sukhothai because of the sheer number of Buddha statues and the preservation of the ruins. There are also less tourists there than Ayutthaya, and no monkeys in sight. Sukhothai is definitely the must-see of all three. If you have the opportunity to self-drive, it is an unforgettable (and affordable) experience.

If you’ve been to any of these ancient Thai ruins, which was your favorite? Tell us about it! Leave us a comment below.

Special thanks to Thai Rent a Car for their support.

25 thoughts on “Ayutthaya, Sukhothai, or Lopburi: Which Ancient Thai Ruins Should You See?”