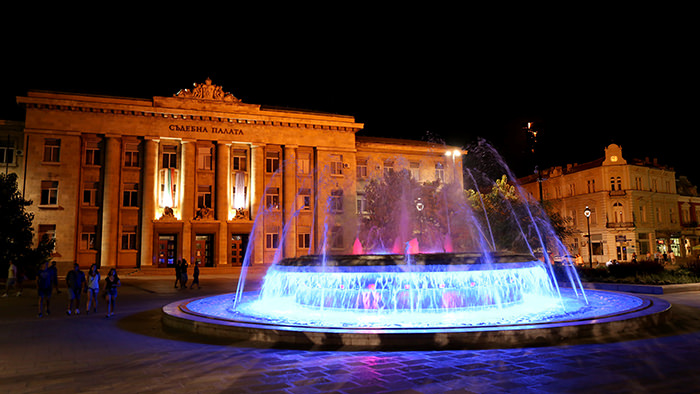 Bulgaria is an extraordinary country at the crossroads between Europe and Asia. Its culture is a living history that combines Thracian, ancient Greek, Byzantine, and Roman influences. Visitors are spoiled for choice when it comes to tourism opportunities. Whether you are a history buff, gastronome, or a beach bum, Bulgaria offers something for every type of traveler.

While modern Bulgaria is pulsing, there are still areas of the country containing relics of the past. Ruse is such a place. Located along the Danube River, in the northern part of the country, Ruse possesses a unique mix of European heritage buildings and national monuments that serve as reminders of its illustrious past. 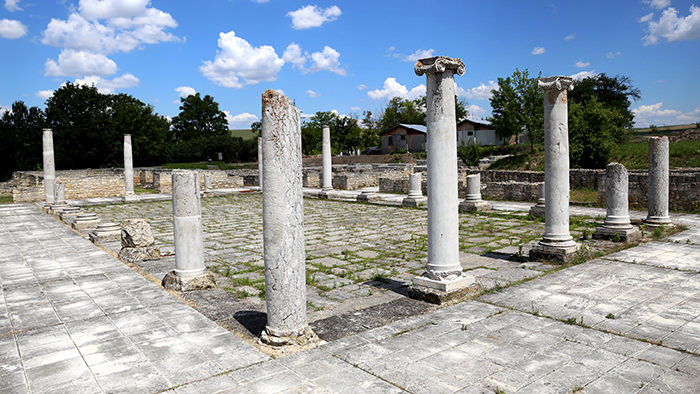 Archaeological finds confirm that man has inhabited the area since 5,000 B.C. When the Romans established a military camp here in the first century A.D. they named it Sexsaginta Piges, or “Town of Sixty Ships.” The name meant the number of ships needed to transport a legion of Roman soldiers. Even before the Romans moved in, the area was inhabited by the Thracian people – a society of equestrian warriors, skilled jewelers, talented builders, and mystical priests. Eventually Gothic and Slavic tribes moved in and destroyed the Roman military base. The country became known simply as Bulgaria when the First Bulgarian Empire was established in 681 A.D. By 1,000 A.D. the Bulgarian Empire encompassed much of Eastern Europe, with its borders stretching from the Black Sea to the Adriatic. 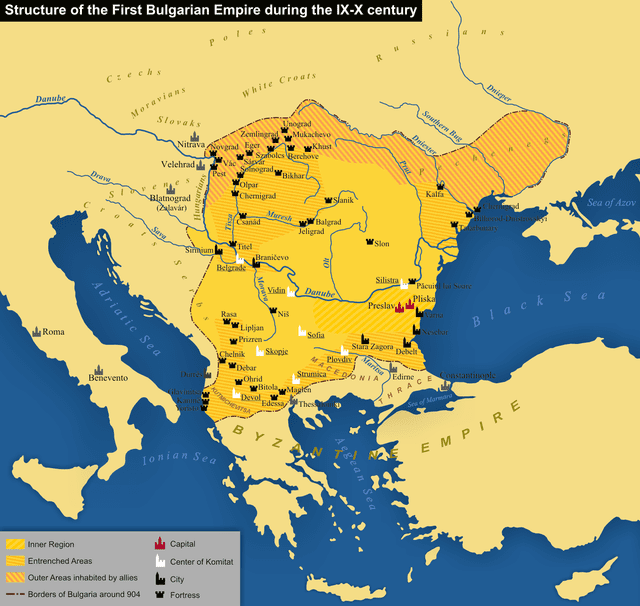 The First Bulgarian Empire was eventually conquered and absorbed into the Byzantine Empire. In 1396 the Ottoman Empire subjugated Bulgaria. The country remained under Ottoman domination until 1700. In 1878 Bulgaria was liberated and once again became an independent state. Bulgaria became part of the European Union in 2007. 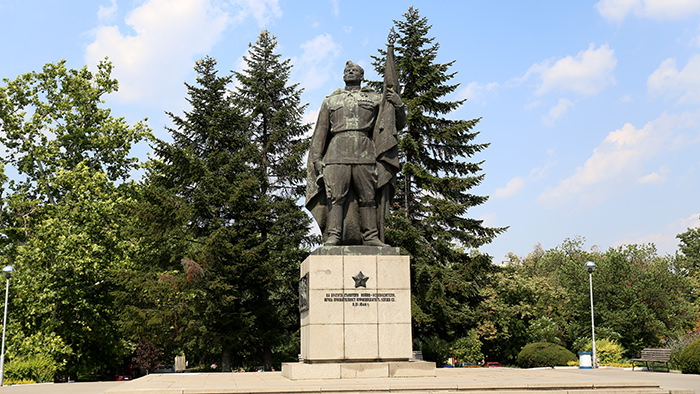 After the liberation of Bulgaria, Ruse was the largest town in the country. In 1897, Ruse was the first place in Bulgaria where a motion picture was shown and where the first print shop was established. It was also where the first bank of Bulgaria was established. Ruse is, without a doubt, Bulgaria’s most aristocratic city. Dubbed “Little Vienna” for its Baroque and neoclassical buildings, Ruse has over 300 architectural landmarks. 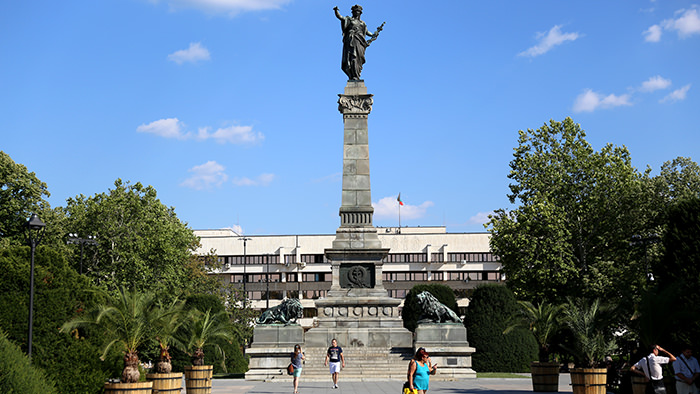 Ruse is the perfect walking city. Just by strolling on foot you’ll get to see several of its gorgeous historical buildings and monuments. The best place to start is Svoboda (Liberty Square), the largest and grandest square in Ruse. Here, the Monument of Liberty depicts a female figure clutching a sword in her left hand while pointing with her right hand to the direction from which the liberators arrived. There are two lions at the base of the monument. One is tearing off the chains of slavery. The other is standing guard of Bulgaria’s liberty. The statue was made in 1909 by Italian sculptor, Arnoldo Zocchi.

To the right of the monument is the Profit-Yielding Building. Constructed in 1909 by Viennese architect Raul Paul Branck, this Baroque-style edifice was originally used as a theater, casino, public library, art gallery, and shopping center. 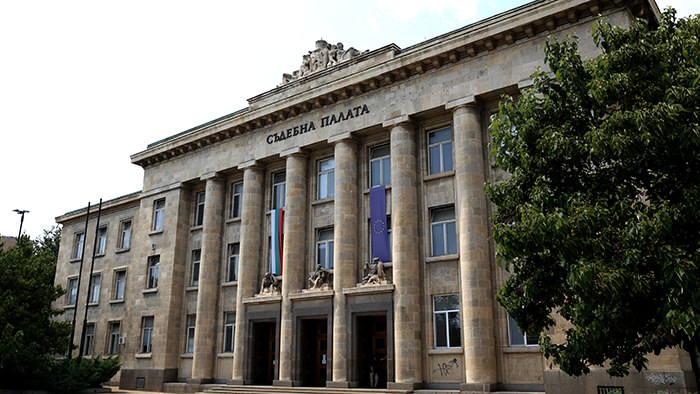 Nearby is the Ruse Courthouse, which was built in 1940 on the location of the old fish market. You can’t miss it; just look out for the fountain in front of it. Left of the monument, at the end of the pedestrian street, is the brightly colored Ruse Opera House. It was founded in 1949 and has since been used for various types of performances, from ballet to concerts. 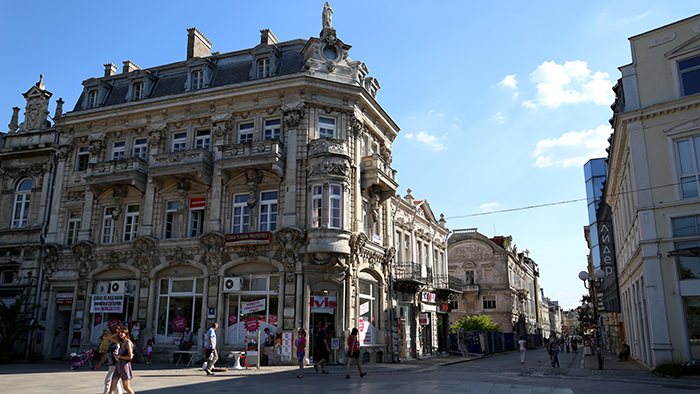 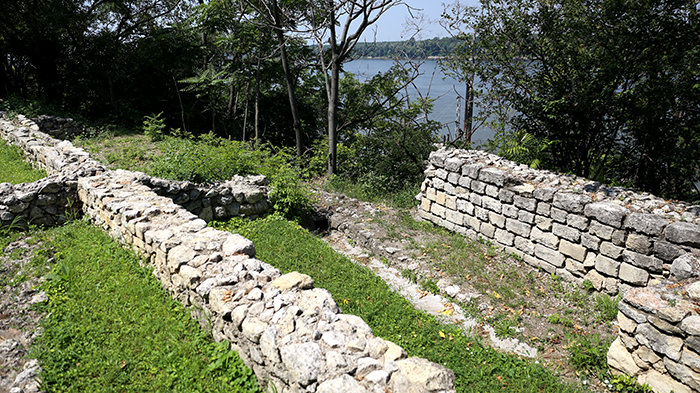 Another great stop for history lovers is the Sexaginta Prista Roman Fortress (+359 82 825 002 / Open 9 a.m. – noon, 12:30 p.m. – 5:30 p.m. Tuesday through Saturday/ Closed Sunday and Monday). The fortress is located on a hill near the Danube River, about short walk from the center of Ruse. The ruins that are visible pertain to the northern fortress wall, the rectangular defense tower, and army barracks. Excavations have also uncovered a Thracian pit complex (1st century B.C.) that contained bronze objects, ceramic vessels, and coins. 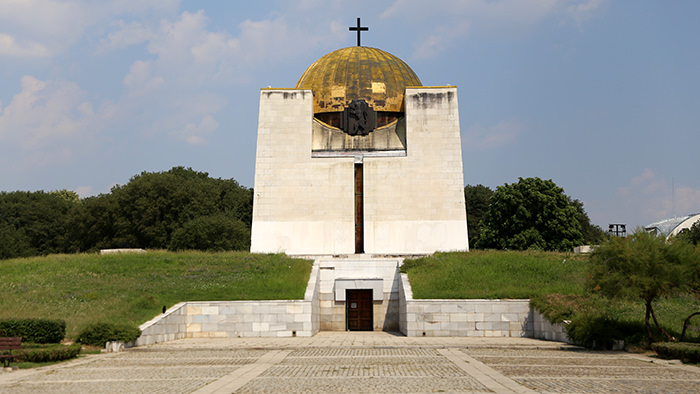 For those of you interested in Bulgarian national history, the Pantheon of National Heroes is a must-see (Vazrozhdenski Square / +359 82 820 998 / Open 9 a.m. – noon, 12:30 p.m. – 5:30 p.m. daily). This national temple/ mausoleum/ ossuary contains the remains of 453 activitists of the Bulgarian National Revival, many of who were from Ruse. The people whose bones are housed here participated in rebellions against the Ottomans, the April Uprising of 1876, or were volunteer soldiers in the Russian-Turkish War. The Pantheon was inaugurated on February 28th 1978 to commemorate a century of liberation of Bulgaria. Directly behind the Pantheon of Revivalists is Zahari Stoyanov’s Tomb and the Memorial of Ivan Vedar. Stoyanov was part of the Bulgarian Parliament. Vedar was the man responsible for averting a massacre of the Bulgarian people by Ottoman commanders. 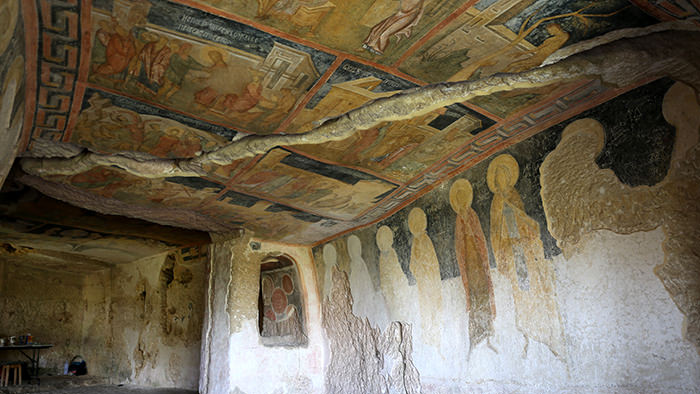 Twenty-two kilometers from Ruse, in the Pismata area of the Rusenski Lom Nature Park, lies a UNESCO World Heritage Site that is very significant for Bulgarians. The Rock Churches of Ivanovo (+359 82 825 002 / Open 9 a.m. – 6 p.m. daily) is a Medieval cave church complex that belonged to the Monastery of St. Michael. They were used as spiritual centers from the 10th to the 14th centuries. The Ivanovo Rock Churches, in particular, were painted sometime in the 14th century. The murals on the cave walls depict scenes from the Bible and from Jesus’s life. 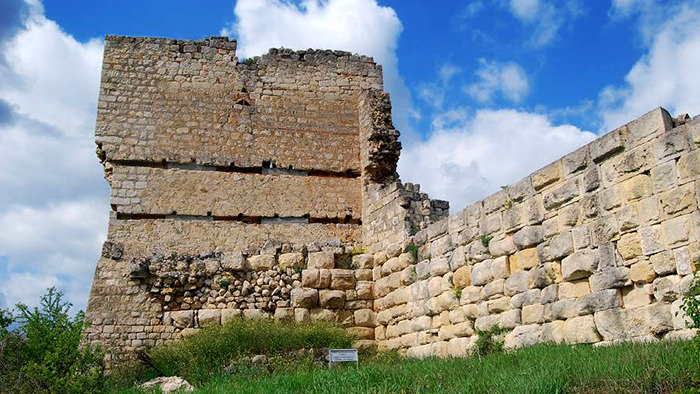 Further south another day trip option is to see the ruins of the Medieval town of Cherven. The town served as Bulgaria’s primary military, economic, and cultural center during the Second Bulgarian Empire between the 12th and 14th centuries. The remains of the town comprise an archaeological site. What there is left to see are the ruins of the feudal palace, fortified walls, churches, and administrative buildings. The best preserved construction in the site is the 12-meter-high, three-story defense tower. 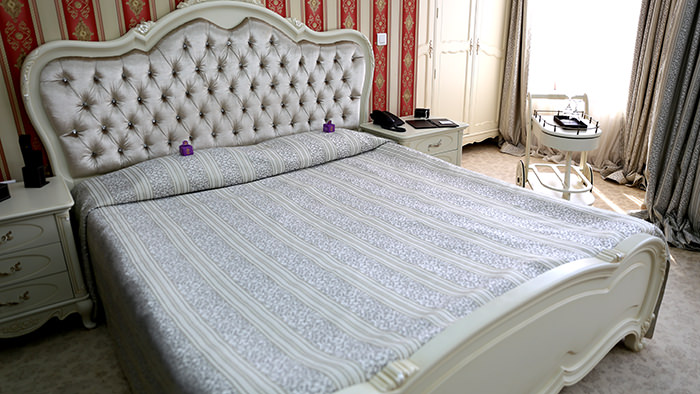 There are several hotel options in Ruse ranging from budget to luxury. We recommend Hotel Vega for its prime location on Aleksandrovska Street, walking distance from many of Ruse’s attractions. This three-star boutique hotel offers five types of modern, comfortable guestrooms ranging in price from $45 to $163. The hotel has Wi-Fi, air conditioning, free breakfast buffet in the dining room, guest parking, and 24-hour concierge service. Be sure to ask for a room with a view over Aleksandrovska Street at the time of booking. 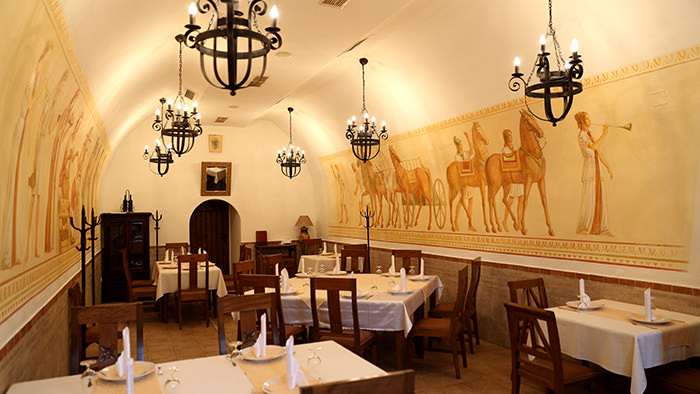 Perched high above the center of Ruse is the beautiful Leventa complex. It’s hard to miss this restaurant/winery since it sits just under the television tower. The building once formed part of an Ottoman fortress – it’s location chosen for being the highest vantage point in the city. But it wasn’t until 2005 when the property was completely renovated, that it was transformed into a dramatic, elegant space for special events, wine tastings, and tasting menus. A tour through the complex reveals several themed dining halls, each representing a different era in Bulgarian history (Thracian, Medieval, Ottoman, and liberation). Leventa not only serves delicious Mediterranean fare, but it is also a formidable producer of wine (over 80,000 bottles each year). 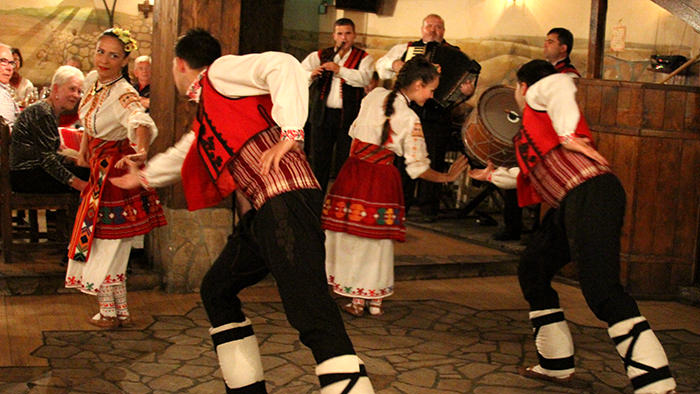 Mehana Chiflika is the best traditional Bulgarian restaurant in Ruse, and like any curious travelers, we decided to see for ourselves. Since 1999, Mehana Chiflika has been the go-to venue in Ruse for an evening of entertainment and hearty Bulgarian food. With seating for over 300, the restaurant is popular with large tour groups, but the food is excellent nonetheless. With live music every evening from 8 p.m. to midnight, you’ll be better off reserving a table a day or two in advance, especially during winter when they’re busiest. The décor is a bit kitschy and overdone, but the rustic furniture and embroidered tablecloths will likely charm you anyway. Mehana Chiflika is located about a 10-minute walk from Ruse city center (liberty square).

Have you been to Bulgaria? We would love to hear about your recommendations for what to see and do in Ruse! Leave us a comment below.

7 thoughts on “What to See and Do in Ruse, Bulgaria”