The Mediterranean island of Kalymnos isn’t usually the first destination to come to mind for most when planning a Greek vacation. Kalymnos is part of the Dodecanese, a group of roughly 165 islands in the southwestern Aegean Sea, and lies within just a few hundred kilometers of its bustling and more popular cousins Santorini, Crete, and Mykonos. But for a quieter Greek island experience that offers incredible cultural and archaeological sites, delicious food, and immersive culture that are bound to please travelers of all types, look no further than the underrated gem that is Kalymnos. Book your trip to Kalymnos now with JustFly.com. 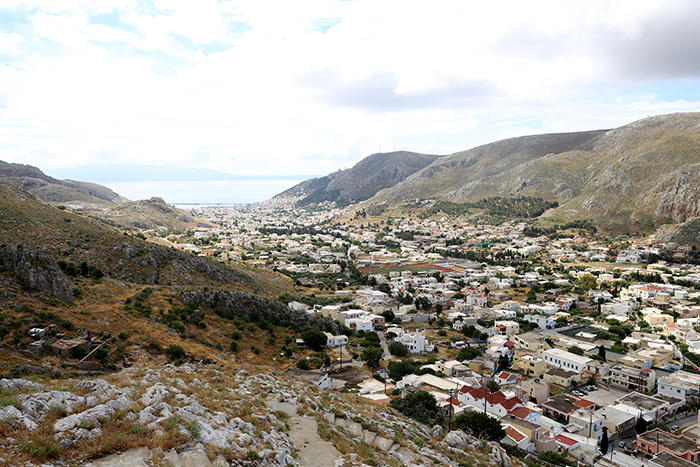 The fourth-largest island in the Dodecanese group, Kalymnos’ long history can be seen at nearly every turn, with medieval castles, Byzantine churches, and ancient archaeological sites dotting its breathtaking landscapes. Kalymnos, which lies just off the coast of Turkey in Asia Minor, also boasts picturesque valleys, charming fishing villages, relaxing beaches perfect for sunbathers and swimmers, and the waters around the island are a haven for sponge divers, which has earned the island the nickname “Island of the Sponge Divers.” 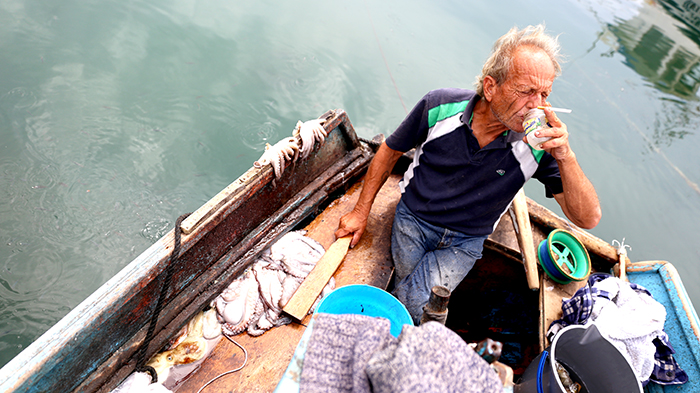 Meanwhile, visitors looking for more thrilling activities can experience the island’s most popular attraction, world-class rock climbing. This tiny island has a lot to offer, but let me take you through the top 5 things you have to do when you visit Kalymnos. 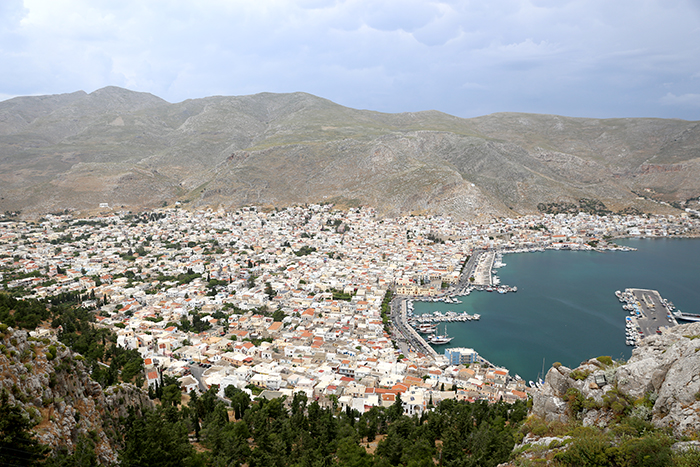 If you travel to Kalymnos via ferry, you will arrive in the island’s capital city and main port, Pothia, which was established on the southern side of the island in 1850, near the old capital city of Chora. 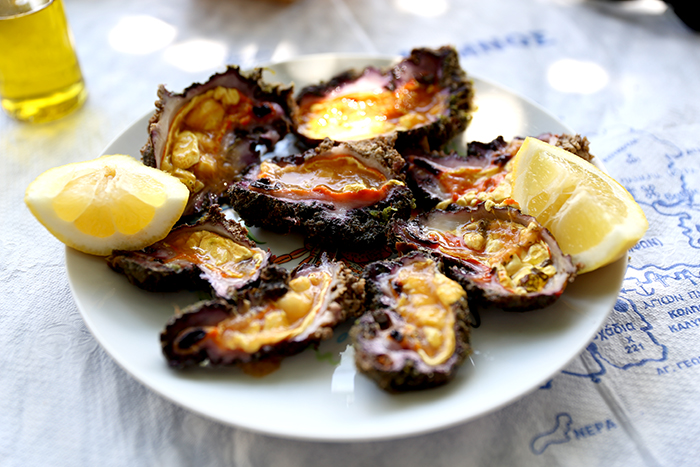 Kalymnos’ long ties to the sea continue to this day, as evidenced by the abundance of fishing boats floating in its harbor and the array of natural sea sponges that can be bought from vendors around the city. To learn more about the significant role these natural sponges play in Kalymnos’ culture, you can visit the island’s sponge museum. 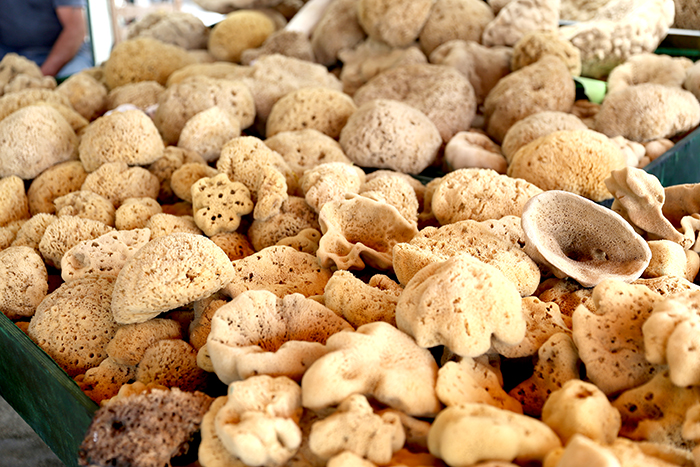 Elsewhere in Pothia, the Maritime and Folklore Museum is a great destination for history enthusiasts looking to learn more about the island’s fascinating past. 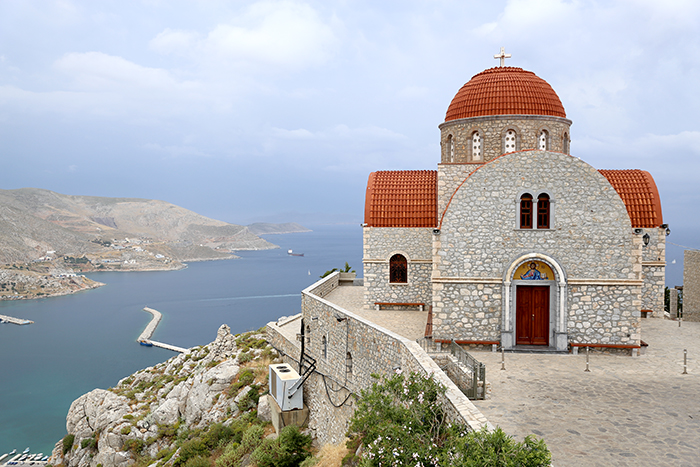 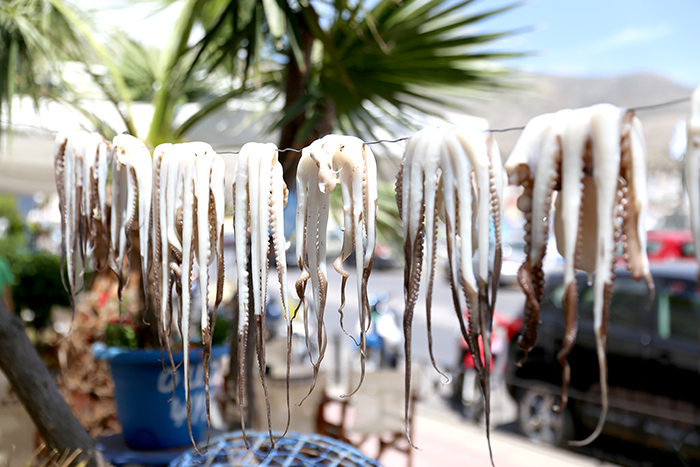 For a flavorful dinner after a day of exploring the city, be sure to indulge in some of the island’s tastiest seafood at the traditional fish tavernas along Pothia’s harbor. I highly recommend the fouskes, a type of sea squirt, similar to an oyster, that is eaten throughout the Mediterranean and often served raw. 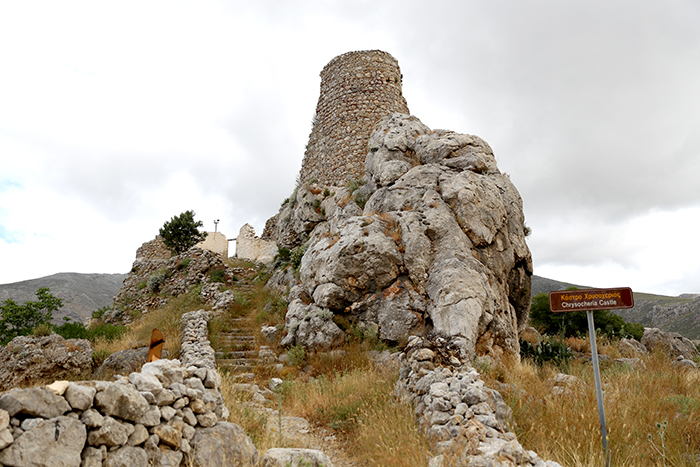 The entire Dodecanese region of the Aegean Sea is known for its medieval castles, and two of the best known can be found on Kalymnos. First up is Chora Castle, also known as Great Castle or Paleochora, which looms over the capital city of Pothia. This 14th century Byzantine castle was built by the Knights of St. John and includes archaeological ruins dating back to the 4th century BC, as well as amazing views of Pothia and both sides of Kalymnos. 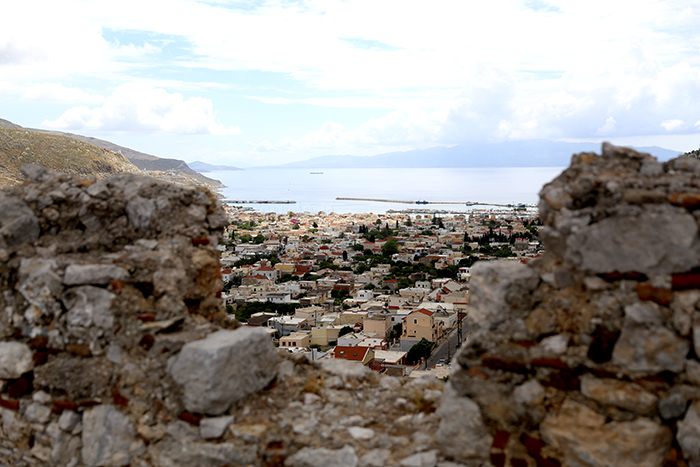 Just a five minute drive from Chora Castle is another knights-era fortified residence, Chrysocheria Castle, which got its name from the treasure trove of gold coins that the Knights of St. John discovered when they arrived in the area. Chrysocheria also goes by the name Pera Castle. One of the Kalymnos’ most iconic landmarks, Chrysocheria was strategically built atop a large hill and served as an important fortification that monitored other nearby castles and the city below. 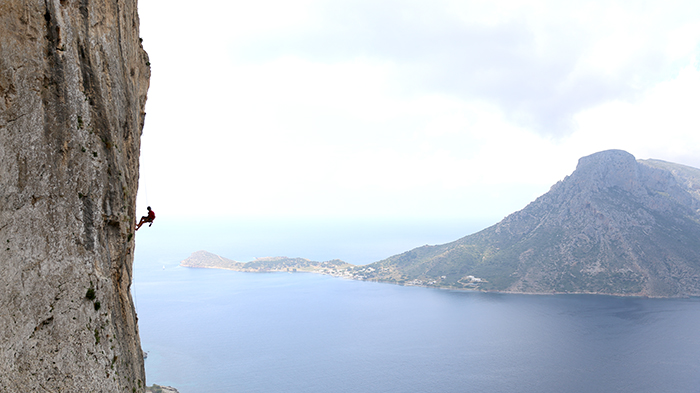 In addition to its ancient castles and charming port city, the tiny island of Kalymnos boasts over 2,000 diverse, established rock climbing routes along the many craggy limestone formations that rise high above the island and offer picturesque views of the Aegean Sea. These rock formations and views have turned the island into a haven for sport climbers from around the world and one of the premier rock climbing destinations on Earth. 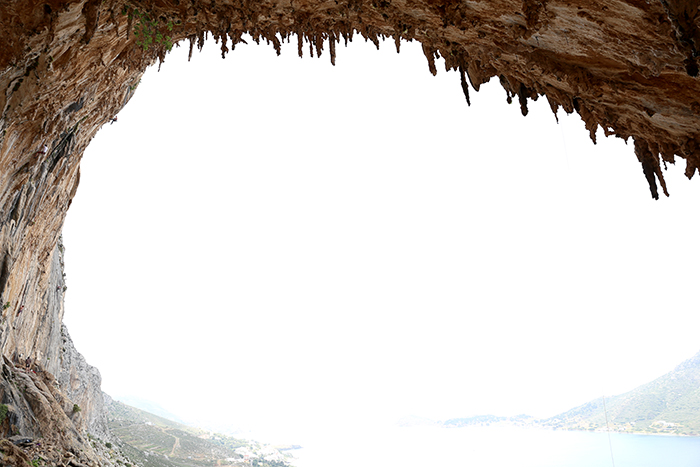 To ensure your safety and help you navigate the rugged terrain, I recommend you take lessons with certified instructor Simon Montmory of Climbing In Kalymnos and his wife Myriam Caissy, two of the few guides who offer classes for beginners. Regardless of your experience level, rock climbing in Kalymnos is a once in a lifetime opportunity and I highly recommend it to any thrill seeker looking for a unique and memorable experience.

A Day Trip to Telendos 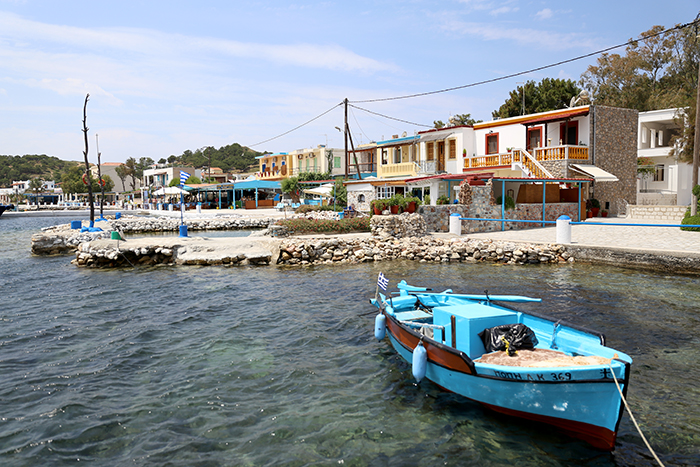 No trip to Kalymnos is complete without taking a quick day trip to the neighboring island of Telendos. While Telendos is now considered a separate island from Kalymnos, the two were connected by land until a massive earthquake hit the island in 535 AD and separated the two, sinking the then-capital of Kellaris, the eroded ruins of which can still be seen in the narrow waterway between the two islands. 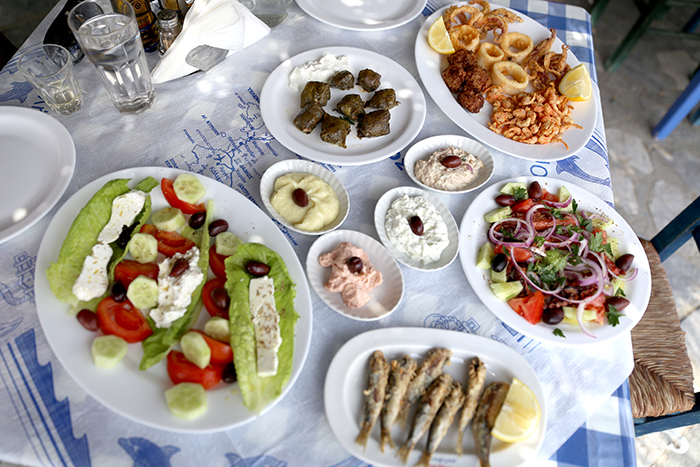 The tiny island of Telendos only has a handful of permanent residents and is a popular destination for sunbathers and rock climbers arriving from Kalymnos. This laid-back island is known for its quiet streets, private beaches, and tavernas, including my personal pick, To Kapsuli, which offers delicious local fare including delicious homemade Greek dishes and freshly caught seafood. 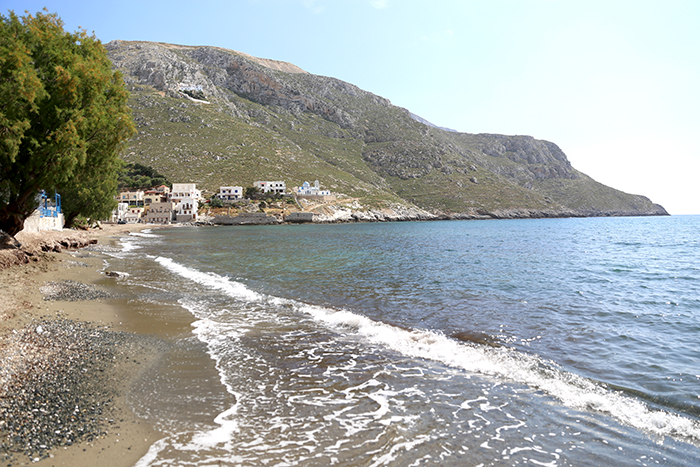 On the western side of Kalymnos you’ll find Kantouni, a long, sandy beach that offers travelers the opportunity to relax and sunbathe on the shores of the Aegean. 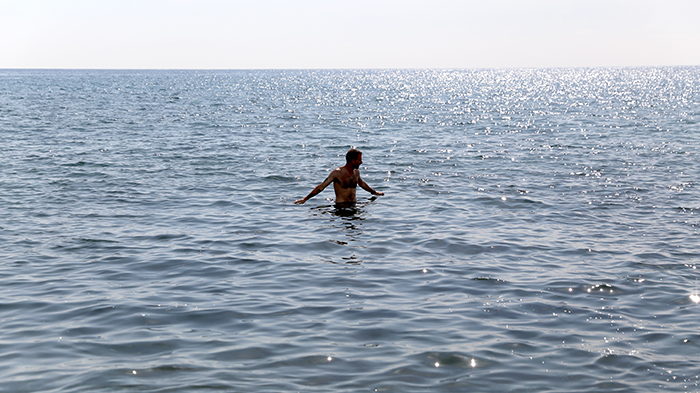 One of the most popular beaches on the island, Kantouni is also home to top-notch hotels, including the Kalydna Island Hotel, my personal pick for its beautiful accommodations and central location. The beach’s incredible fish taverns are also a must-visit. I highly recommend the seaside Mamouzelos Fish Tavern for their unforgettable homemade dishes, especially their spectacular octopus meatballs. 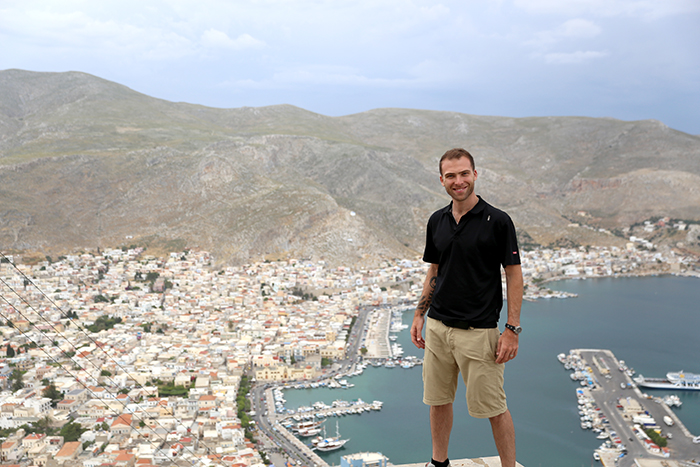 Kalymnos may be a small, underrated island, but its sites, attractions, beaches, history, and local charm make it a titan when it comes to unique and memorable travel experiences. These are just five of the many locations I recommend you visit during your stay. While you’re there, be sure to enjoy the moments and soak in every experience, and I promise you will walk away from Kalymnos with a deep appreciation of the culture, history, and people of this phenomenal little island.

One thought on “5 Things to Do in Kalymnos, Greece”