The metropolis of Bursa, Turkey in northwestern Anatolia is a lively and historic city that boasts countless points of interest, but what to see and do in Bursa depends largely on where your interests lie. Bursa’s roots can be traced back to 5200 B.C., the year the area was first settled. What is now Turkey’s fourth-largest city swapped hands between the Greek, Bithynia, and Roman Empires before it became the first major capital of the Ottoman Empire between 1335 and 1363. 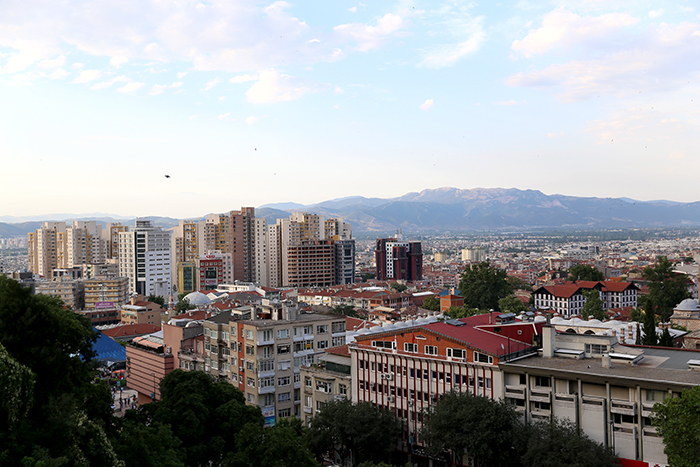 Bursa, which is part of a UNESCO World Heritage site, has a long history that can be explored at practically every turn. But this city, which is also known for its food, beaches, bazaars, hot springs, and more, has a lot more to offer to visitors than just history, much of which will be explored in this guide of what to see and do in Bursa. 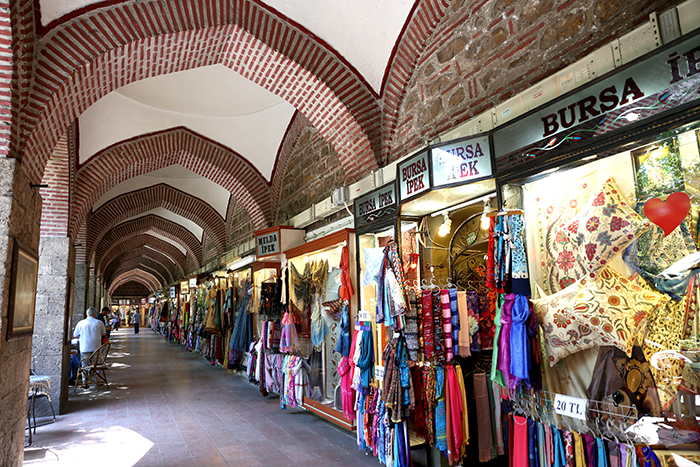 Bursa’s Grand Bazaar is one of the city’s best spots for shopping. The city was known for producing high-quality silk goods during the Ottoman period, and fine ipek, or silk, can be found at 40 shops in the top level of the bazaar’s Koza Han section. 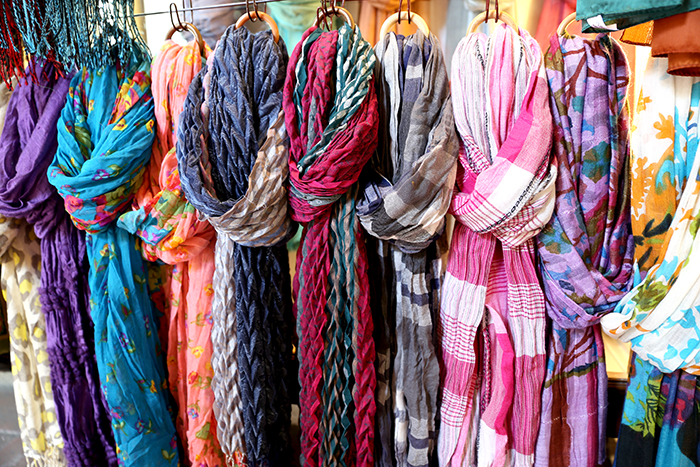 Throughout the rest of the bazaar, you’ll also find vendors selling shoes, clothing, carpets, bags, jewelry, antiques, and souvenirs, as well as dried fruits, nuts, locally-produced cheeses and honeys, and a wide selection of fresh fruits and vegetables.

Check out 5 Things to Do in Antalya, Turkey 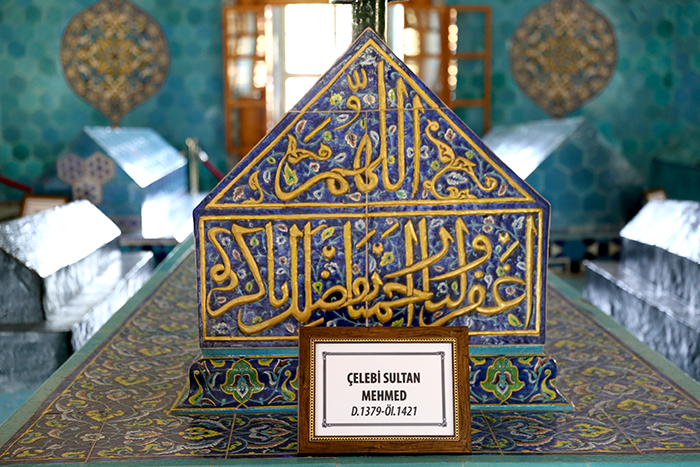 Just a ten-minute walk from the Grand Bazaar is a colorful mausoleum known as Yeşil Türbe, or The Green Tomb, the final resting spot of the fifth Ottoman Sultan, Mehmed I. 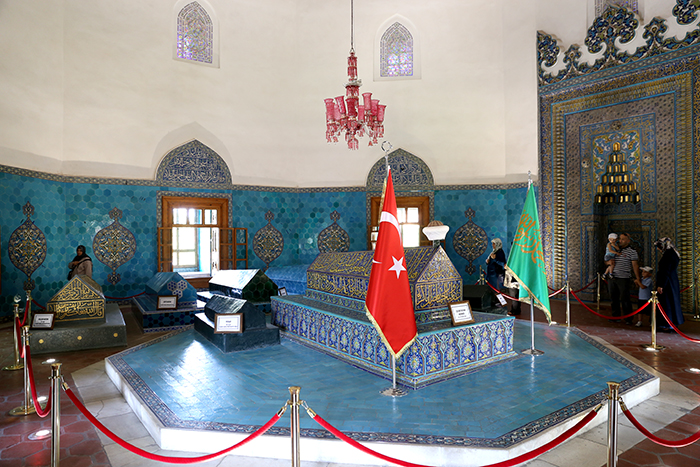 The Green Tomb is well known for its intricate tilework, which include the bluish-green tiles that adorn the building’s exterior and give the mausoleum its name, as well as the more detailed tiles that are affixed to the tomb’s interior walls. 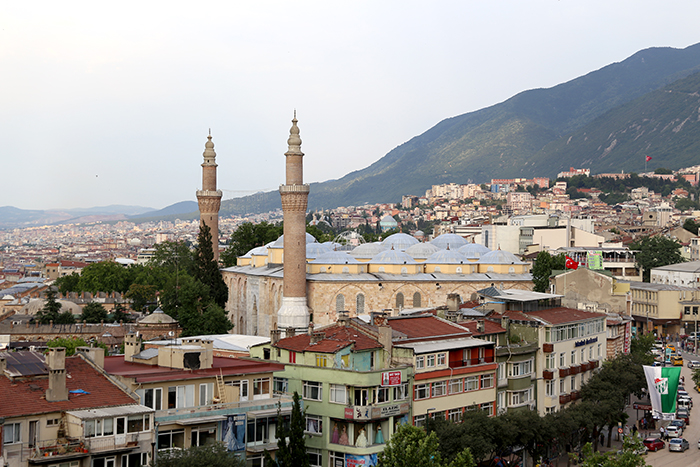 In the old city center, you’ll find the Grand Mosque, which boasts twenty domes and two minarets and was built between 1396 and 1399. The largest mosque in Bursa, it is considered a landmark of early Ottoman architecture. 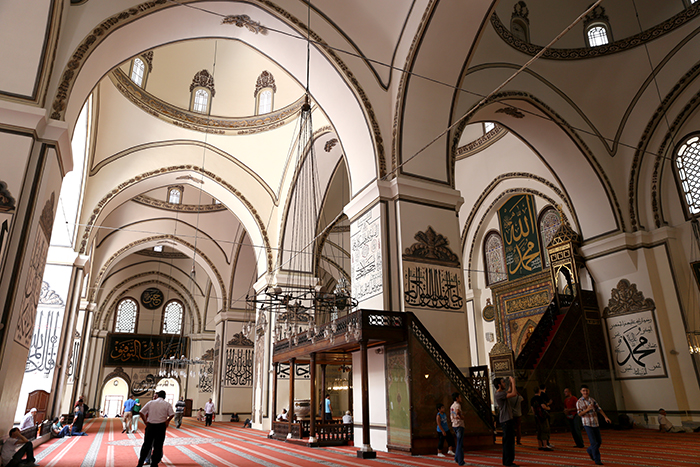 The white, black, and gold interior of the mosque is spacious and dimly, which gives the mosque a serene and somewhat intimate atmosphere. Admission is free, but visitors should remember to take off their hats and shoes before leaving, and women must cover their hair. No tour of what to see and do in Bursa is complete without a stop here. 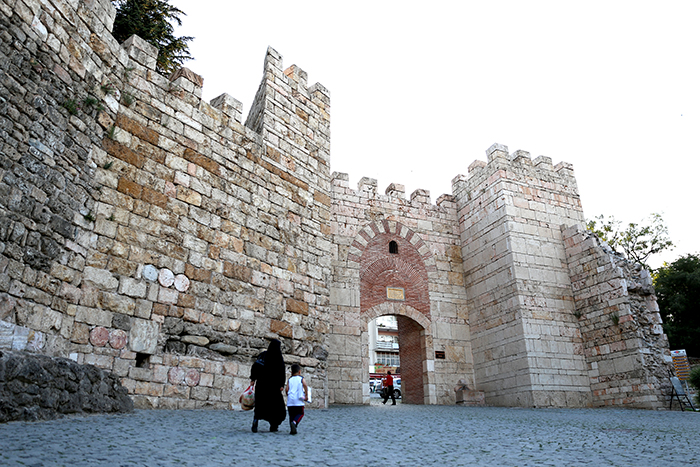 A ten-minute, uphill walk west from the Grand Mosque will take you to the oldest part of Bursa, which contains Hisar Gate, the only surviving remains of the old city wall of the former citadel. 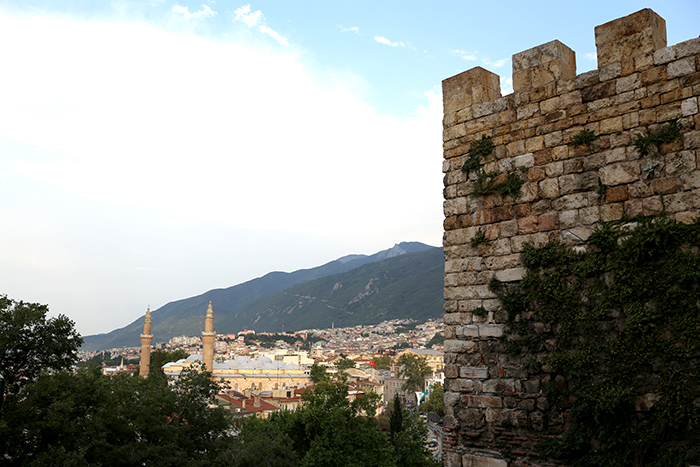 The Gate sits atop a promontory overlooking Bursa, and some of the best views of the city come from the battlements at the very top of the wall. 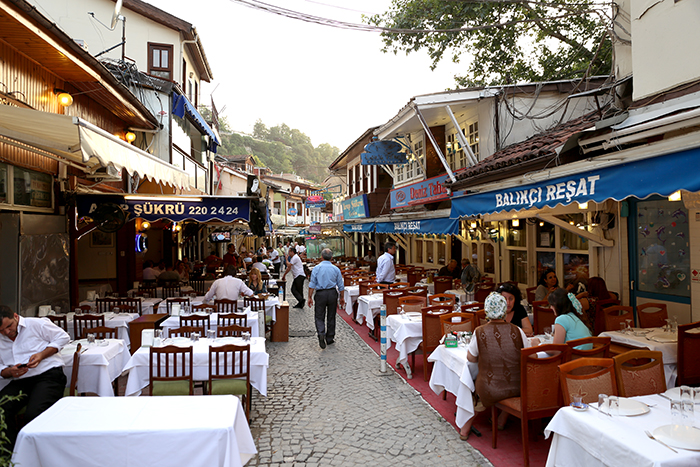 For some of Bursa’s finest eats, take a trip to the Arap Şükrü area, where you’ll find Deniz Tabagi, a fish restaurant and seafood market that has open since 1952. 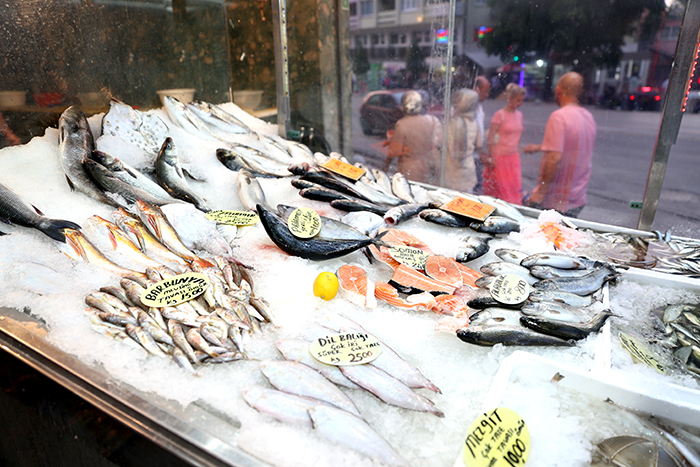 Centrally located along a bustling pedestrian-friendly street, this reasonably-priced spot is the perfect place to visit for succulent seafood dishes like octopus, grilled sea bass, fried calamari, and grilled turbot. 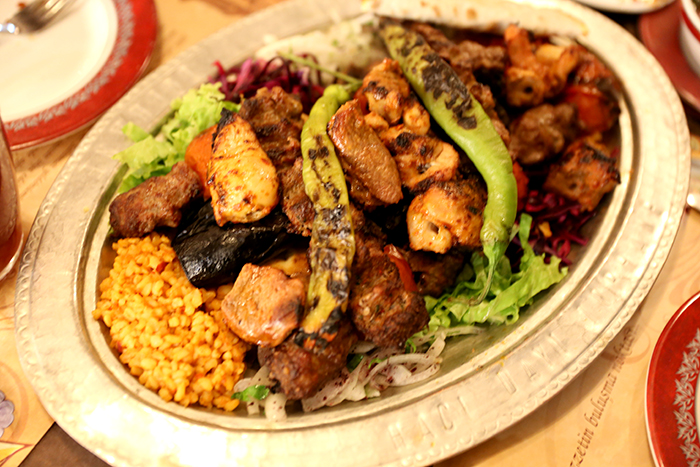 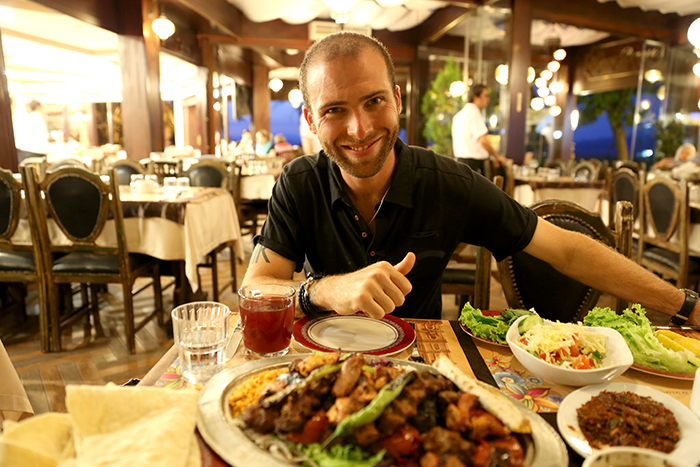 Though the restaurant boasts a wide-ranging menu that includes meatballs, chicken chops, baked pizza-like breads called lahmacun and pide, salads and soups, and more, I recommend the mixed kebabs. No alcoholic beverages are served here, but don’t fret: their grape juice is really good! 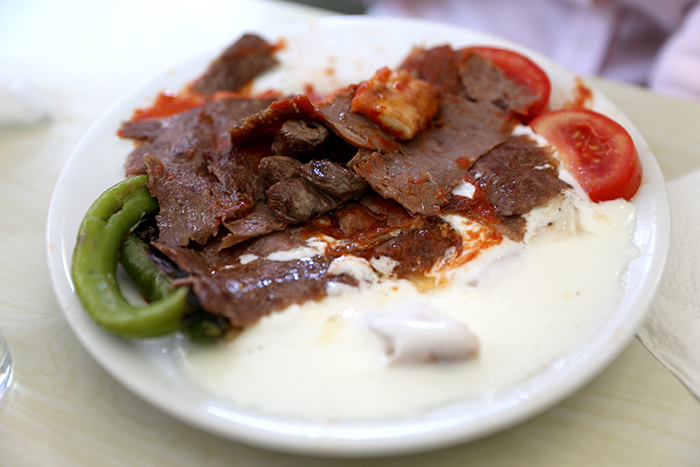 Check out Things to See and Do in Edirne, Turkey 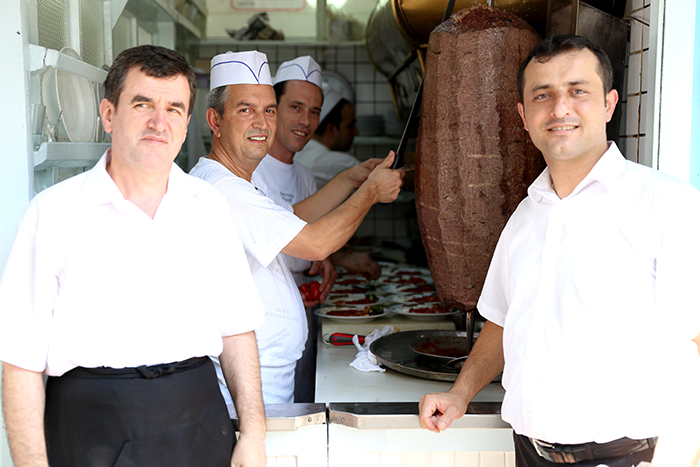 This tasty, internationally acclaimed Turkish dish consists of roasted lamb, tomato sauce, yogurt, pita, and butter sauce. The dish is served with a glass of homemade grape juice, which is equally phenomenal. 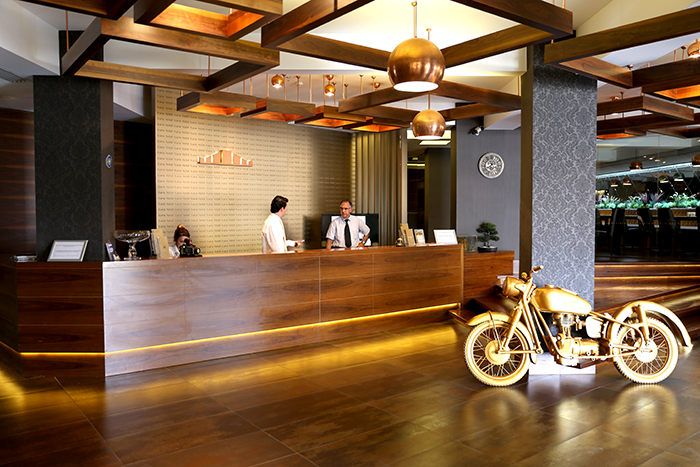 For the best accommodations in Bursa, look no further than Tiara Termal & Spa Hotel. 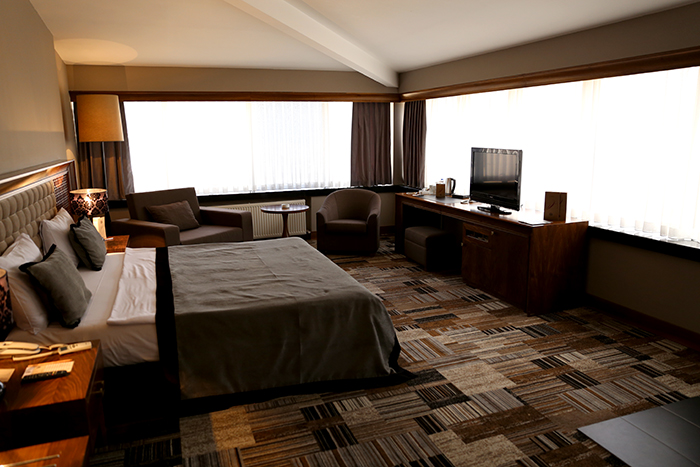 With 146 reasonably priced rooms, an exercise center, restaurant, gorgeous grounds, and a world-class spa that offers the largest thermal pool in the city, as well as free saunas and steam rooms for all guests to use, the Tiara Termal can’t be beat. 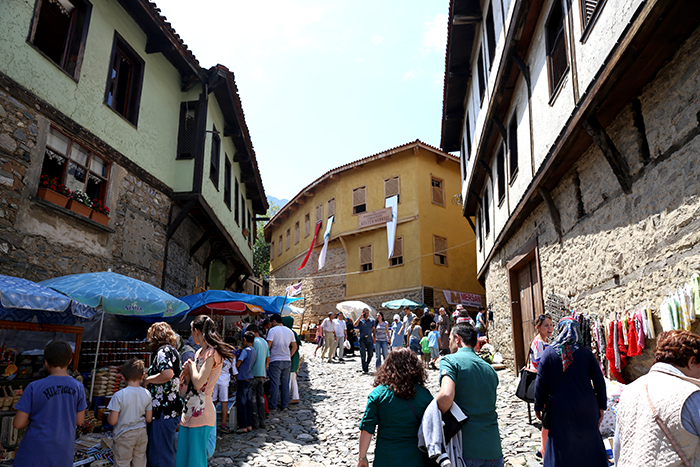 If you’re a history buff, a quick trip to the traditional Ottoman village of Cumalikizik is a must. Just 20 minutes outside the Bursa city center, this ancient town dates back more than 700 years to the foundation of the Ottoman Empire. 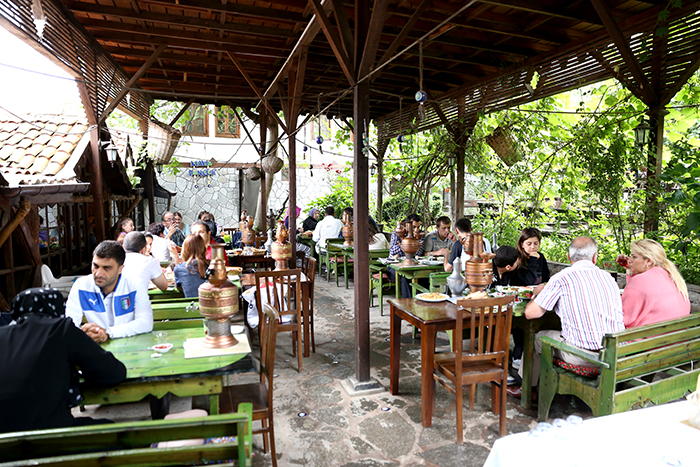 A whopping 270 timber houses dating back to the Ottoman period still stand in this charming town, whose cobblestone streets and Sunday Market will transport you back in time. I recommend going to Mavi Boncuk restaurant for an inexpensive breakfast of local cheeses, vegetables, eggs, and creamy cheese pancakes. 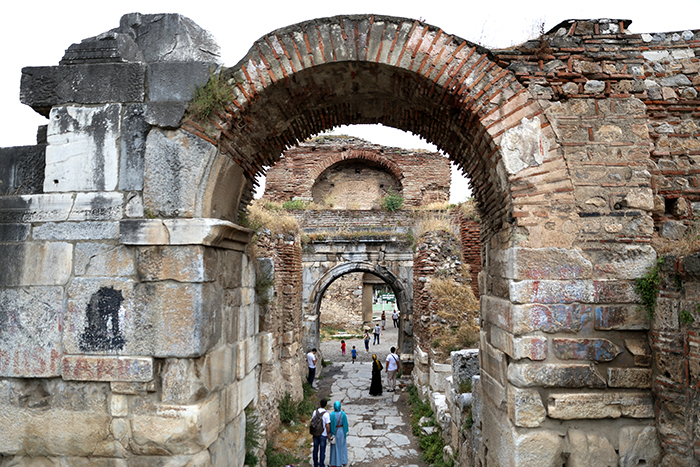 Last on our list of what to see and do in Bursa is a day trip to the ancient city of Nicea along Lake Iznik in Iznik, Turkey. Nicea was founded in the 4th century and is famous for being the site of the Great Council of Nicea, a meeting of over 300 bishops from across the ancient Christian world in 325 A.D. 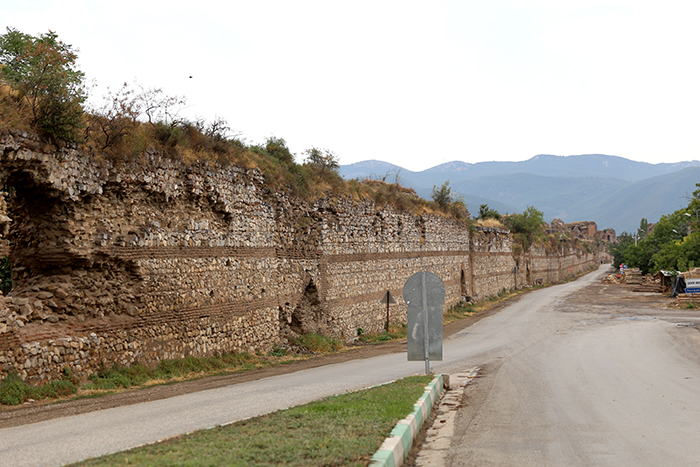 History buffs can purchase the blue, ceramic tiles that Iznik is known for, which contributed to the construction of the Blue Mosque in Istanbul. Any breakages of the tiles during your travels back to your home country can be fixed using glue for ceramic repair. Also, be sure to check out the Ayasofya Musezi, or Hagia Sophia Museum. If you get hungry, I recommend the meze plates and fish kebabs at Camlik Restaurant. They are to die for! 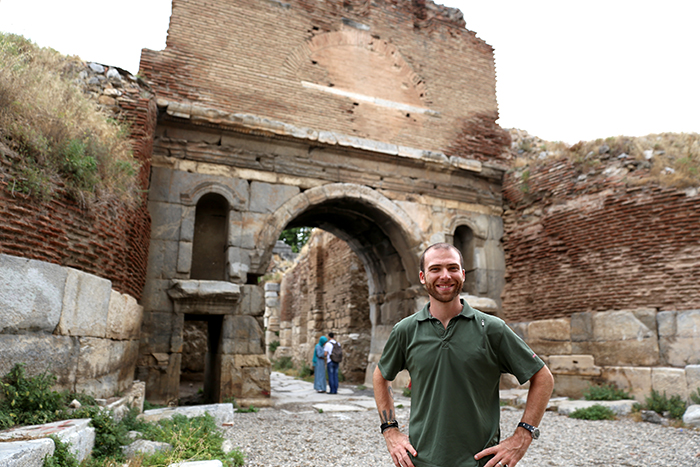 That concludes our guide of what to see and do in Bursa. No matter what kind of traveler you are: a shopper, a food enthusiast, or a history buff, this beautiful city is sure to have something for you. Book a trip to Bursa today to experience it for yourself!