The eighth day of my epic trip through Kerala, India began in the state’s commercial hub, Kochi! There, my boy Ebbin and I visited the historic Fort Kochi and went on an amazing Indian food tour, where we had everything from John Abraham eggs to masala seafood and visited some attractions in Kerala, India. Come along with us as I continue exploring the city of Kochi!

We left the Coral Isle Hotel early so we could head across the water to Fort Kochi, which is where the city was first founded in the early 1500s by the Portuguese. There are tons of historical Portuguese and Dutch buildings there, as well as churches and a lot more! While you can go the long way to get there, we decided to take the ferry, which is much quicker. 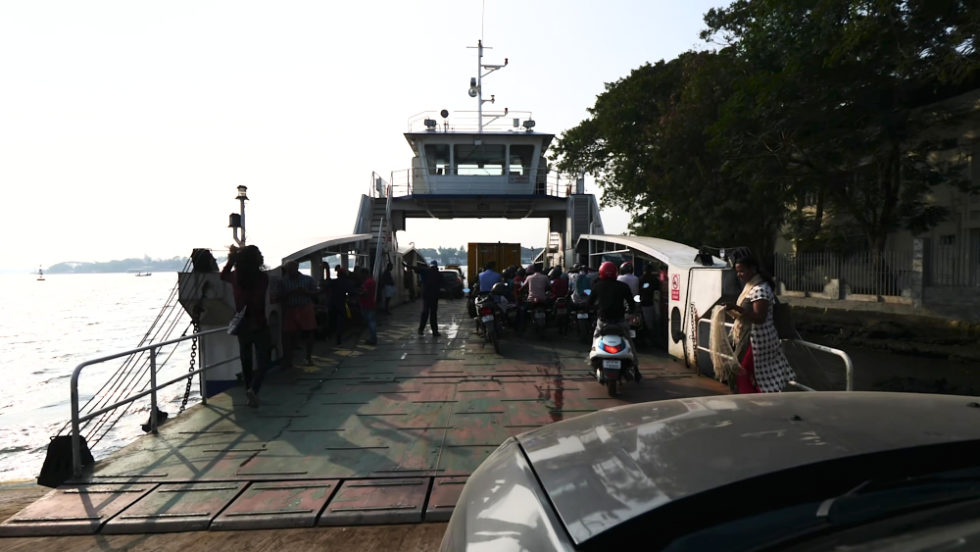 It cost us 65 rupees/$0.85 USD to take the car onto the jam-packed ferry, where there were also lots of other cars, trucks, tuk tuks, and bikers. It took about 3 minutes for us to get there, as opposed to 45 minutes to drive there. 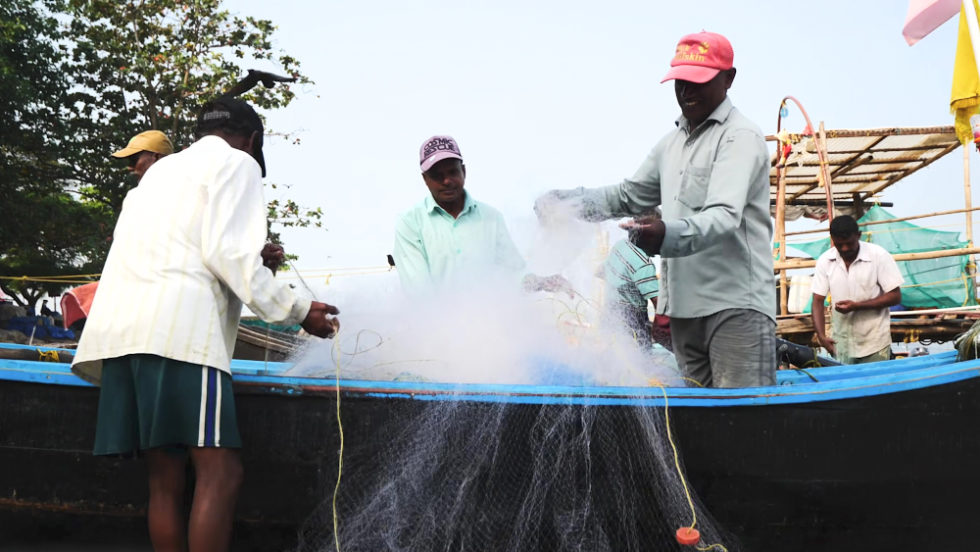 Fort Kochi felt like a European town, but in the tropics. It reminded me of a lot of places I’d visited in the Caribbean. The architecture was beautiful and there were lots of small, short buildings. To the right was the Arabian Sea, where there were lots of fishermen and huge Chinese fishing nets. There was a strong, fishy smell in the air!

We got out of the car and passed through a mini park with lots of vendors selling things like hats. On the other side is the fishermen’s beach, where they pull in their casting nets. I could see fish, prawns, and crabs. There were also fishermen in the water. 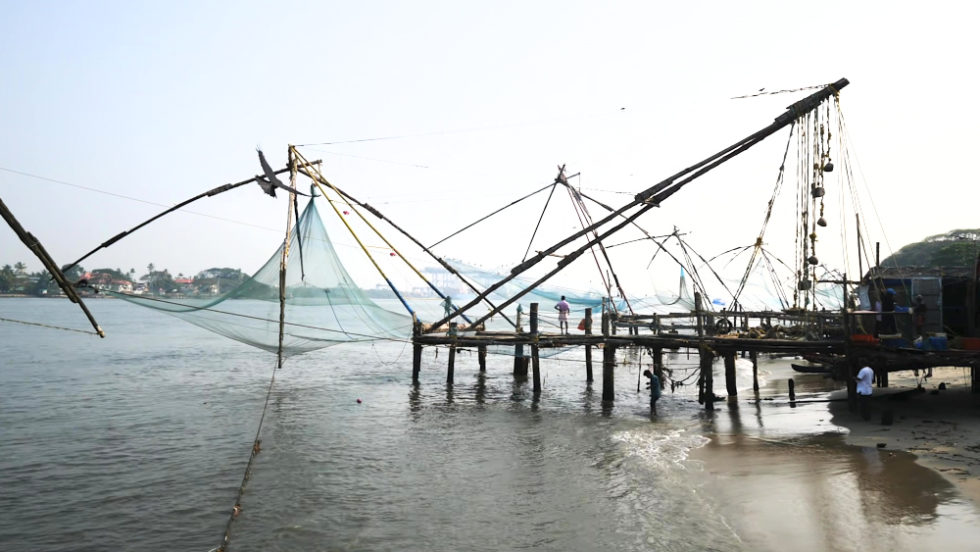 The famous Chinese fishing nets are huge. If you want, you can cast one yourself for 500 rupees/$6.56 USD. You have to ask permission from the fishermen to explore the piers. They’re wooden and uneven, but cool to explore! 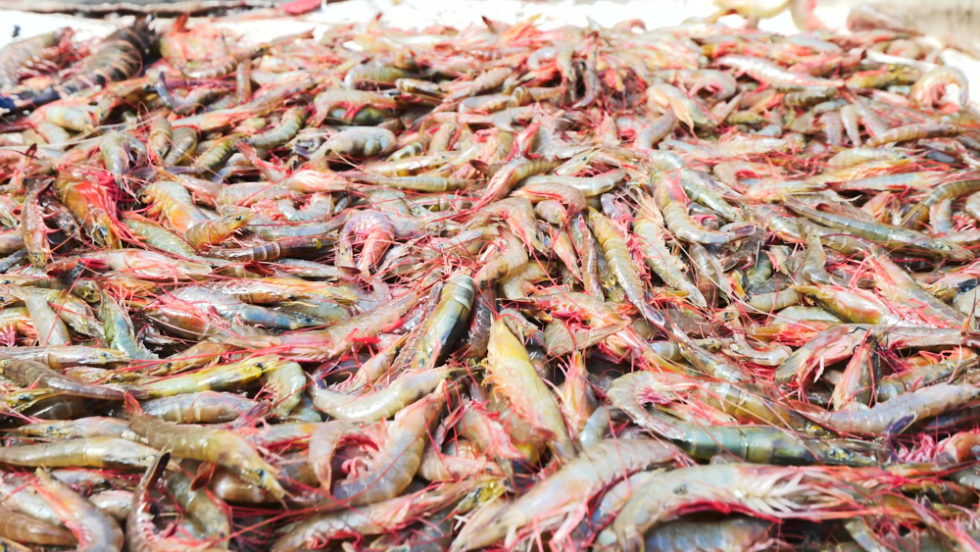 The fishermen here have been fishing here for centuries. It’s such an authentic area of the city. As we continued on, we passed vendors selling crafts like jewelry, watches, musical instruments, and elephant masks. Then, we arrived at a fish market, where we could buy a fish and get someone to cook it up for us. They had red snapper, king fish, grouper, barracuda, tuna, and more. They auction fish off here. I watched someone get the highest bid! 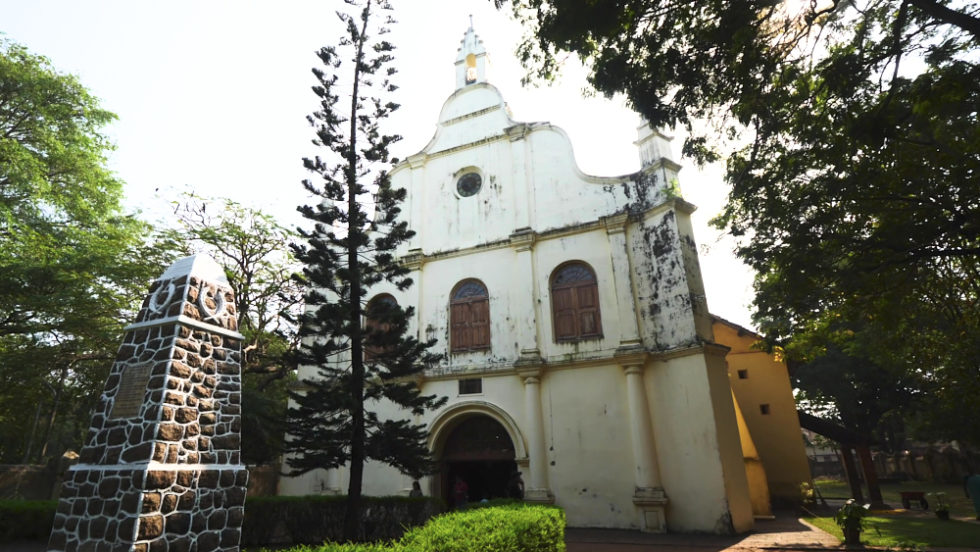 I was getting so hungry, so we headed to get some breakfast. On the way, we stopped at St. Francis Church, one of the oldest churches in India. It was founded in 1503, the same year Fort Kochi was founded. It’s so famous because the Portuguese explorer Vasco de Gama came here on his third trip to India and died in 1524. His remains were buried inside the church, but they were moved back to Lisbon 12 years later. The church is also known as Vasco de Gama Church! The church itself was renovated in 1779.

Then, we passed a Dutch cemetery, one of the oldest European cemeteries in India. From there, we started our Fort Kochi Indian food tour at Kashi Art Café, one of the best places in the city to eat food. It’s more continental British and European café food. Right inside is a gallery with lots of paintings. Further on is where they serve drinks like coffee and fruit juices, and past that is an open-air café area. We sat at the end of the dining area, where there was more artwork along the walls. 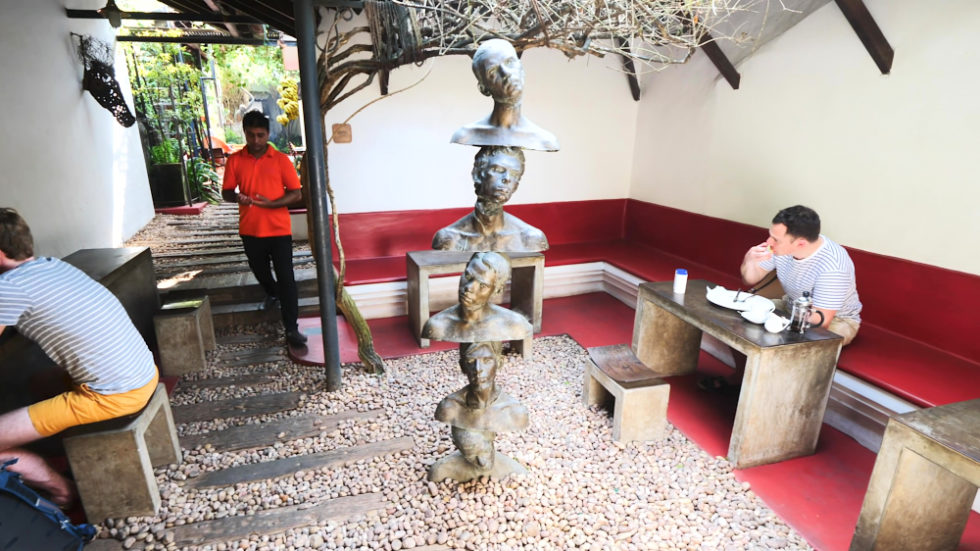 I went with the John Abraham omelet, which is named after a local Bollywood actor! It’s an egg white omelet that comes with mushrooms, sunflower seeds, sun-dried tomatoes, pesto, and toast underneath. They also serve homemade granola, poached eggs, oatmeal, fruit, pancakes, appam, vegetable stew, and more. They also serve coffee, which is king here. I got some French pressed coffee, while Ebbin got banana pancakes! 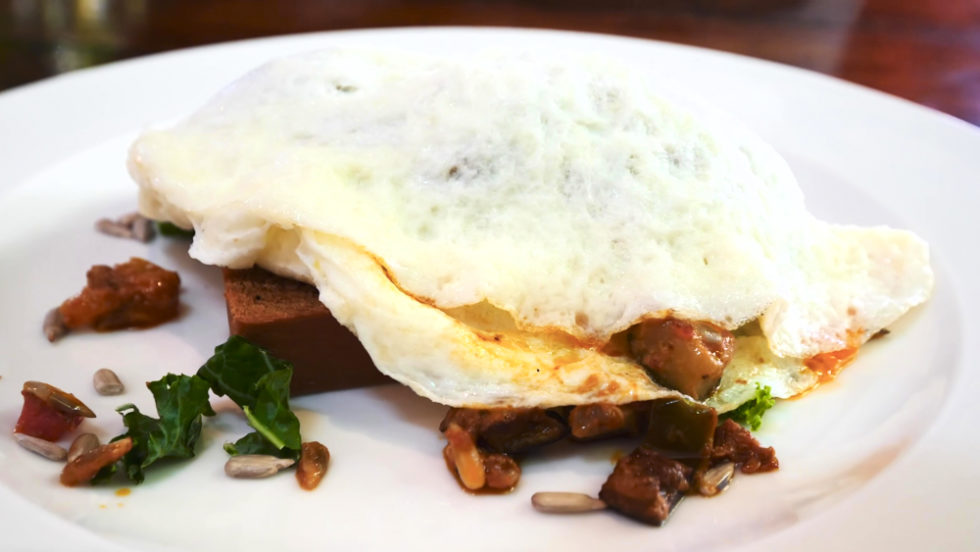 My omelet looked amazing! It also came with a type of pickle. I took my coffee straight and black. It was really strong and dark. You can tell coffee is good if you have it without sugar and it still has some sweetness to it. It was really good! 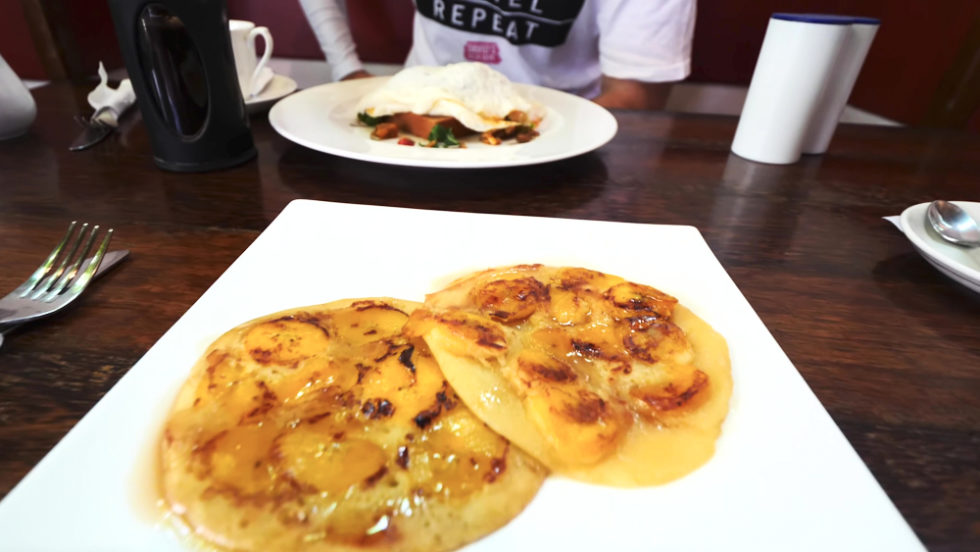 There was an overload of vegetables in the omelet. I got a bit of everything, including the toast. It had a bit of an Indian taste and a bit of spice. The pickle was really nice and I really liked the bread! I hadn’t had eggs like this in a while. It was different from what I’d been eating in Kerala, but this is what they eat in the colonial area of Kochi!

The sun-dried tomato was so good. It was my favorite omelet in India! Ebbin’s pancakes were similar to a plain appam. While we ate, I met some people from Slovakia! Another thing I loved about the omelet is that it was very light. It wasn’t too filling, which was good, because we were going to eat a lot today! 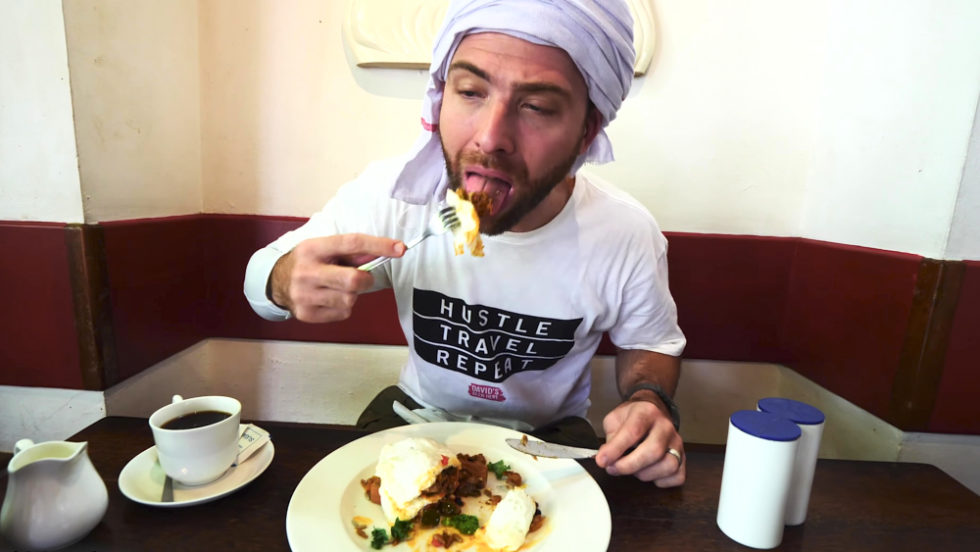 Then, I finished up with some ginger tea with honey. It’s the best thing for your throat. It was like pure ginger and the honey gave it a nice sweetness. I hadn’t had it before, but it was so good! In total, our meal came to 770 rupees/$10.11 USD. 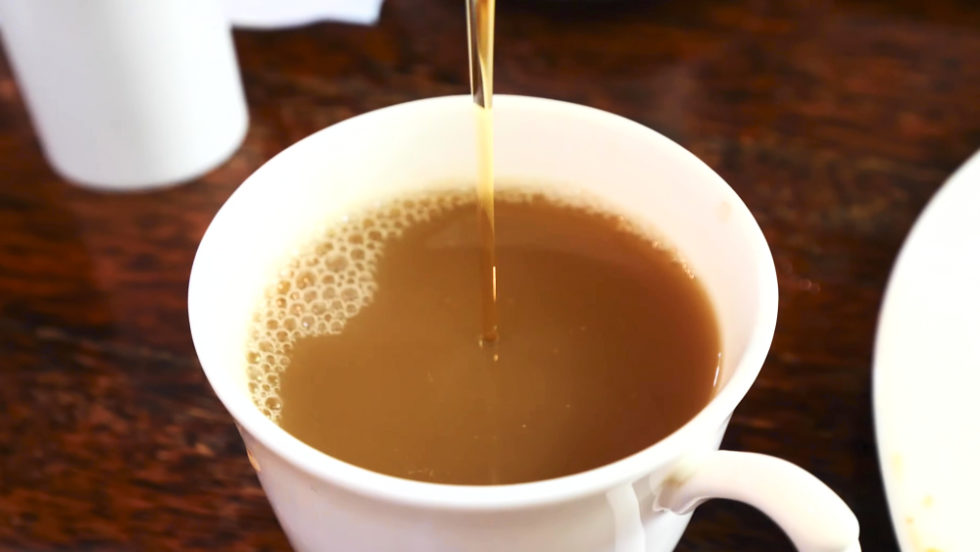 After breakfast, we headed to do something really special. I wanted to find a traditional Kathakali mask for my collection, so Ebbin took me to a synagogue in the Jew Town. It takes about 15 minutes to get there, but there are so many traffic stops and people stopping to unload and offload goods. If someone stops in front of you, you have to wait because the street is so narrow. 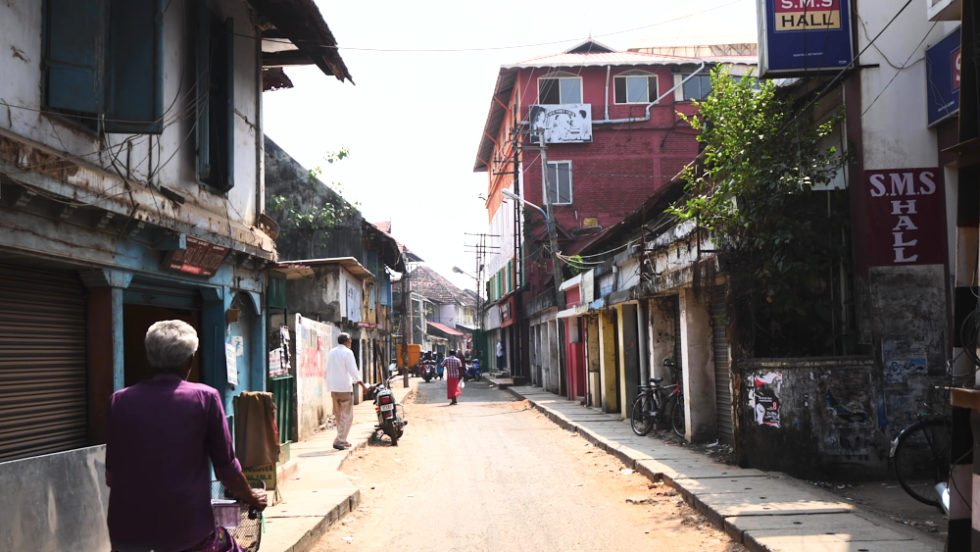 While we waited, I got a chili off the truck that had stopped ahead of us. It wasn’t bad at first, but then it got super hot! They had a truck full of chilies! We continued through Jew Town, where there were lots of craft vendors and textiles everywhere. There were also lots of historical buildings. I suggest parking somewhere because it’s too tight for cars, and hiring a tuk tuk.

We parked and walked around. We saw some spices, a store with lots of handicrafts, and more. Inside the spice shop were some things I’d never seen before, including a medicinal seed that is used in massaging. You see so many craft, spice, and textile vendors because Kochi is a big tourist destination. 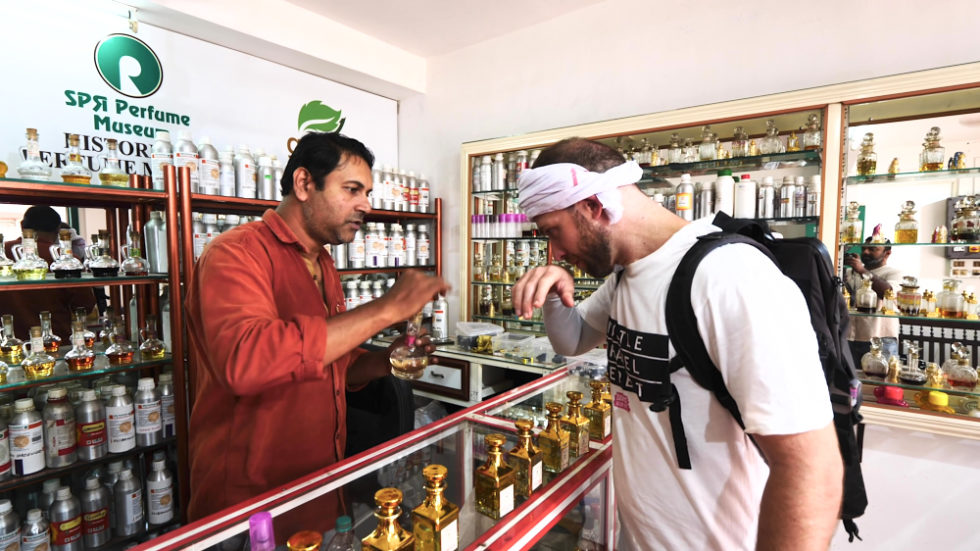 Then, we headed to SPR Naturals Natural Home Fragrances, which sells perfumes. They have white rose oil, kiwi oil, pink lotus oil, cinnamon leaf oil, lavender oil, and more. They were all blended, natural oils: real perfume. The vendor put a bit of white rose oil on my hand for me to smell it. It smelled incredible! Then, I tried the red rose. I liked the white better; the red is really strong. I bought a small bottle of the white rose for 600 rupees/$7.88 USD for 12 mL. 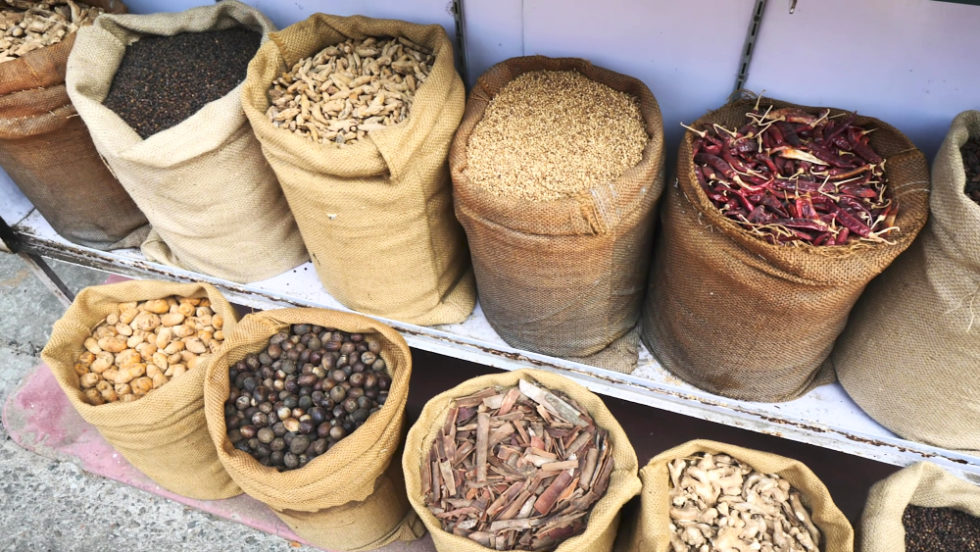 Ebbin tried some sandalwood and peach and I even smelled a coffee scented oil! I was looking for something for my wife, and got her some pink lotus oil. It smelled so pure! Then, I continued on to look for something for my two nephews, my niece, and my two daughters, who always keep me motivated. I found some black Kerala T-shirts with elephants on them for my daughters and niece and an India tuk tuk Ferrari shirt for my newborn nephew. They came to 600 each. The shirt also had lots of cool elephant statues. The guy working there was super nice. He gave me a discount!

Then, we arrived at another shop with a Kathakali wall hanging outside it. I headed upstairs, where they had lots of wood carvings and copper and brass goods.  They also had mask wall hangings, which were pretty expensive at 4,500 rupees/$59.07 USD. I also saw some Bhutanese masks and cow masks, and antiques. I saw some beautiful Buddha busts and an amazing Ganesha statue. 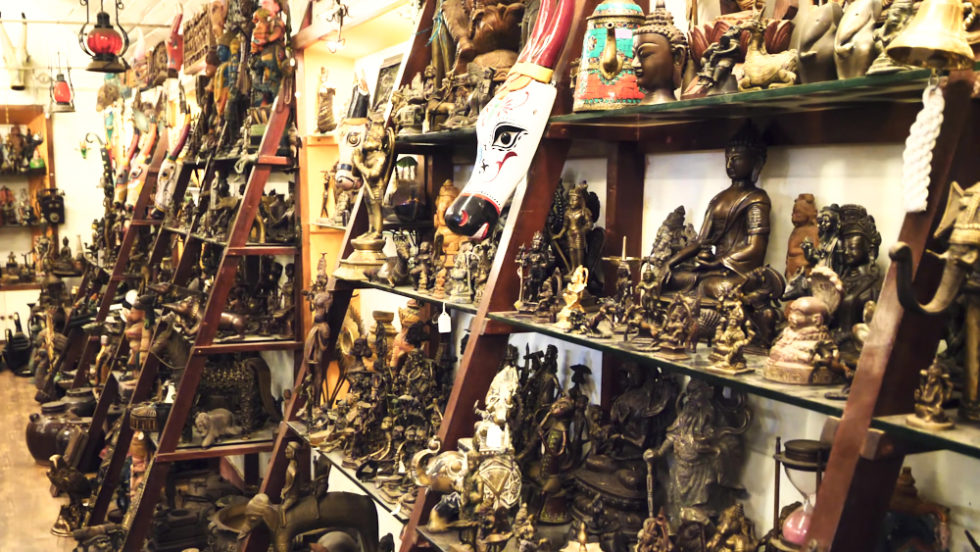 Then, we headed to the oldest active Jewish synagogue in all the commonwealth nations. I couldn’t film inside, though. It’s worth a visit and was built in 1568 by the descendants of Spanish, Dutch, and European Jews. It only costs 10 rupees to enter, or about $0.13 USD. Then, we continued our tour of Fort Kochi. We found the Kathakali mask wall hanging for 2,000 rupees/$26.25 USD. I was so happy I got my wall hanging! Then, it was time for us to look for some seafood for lunch! 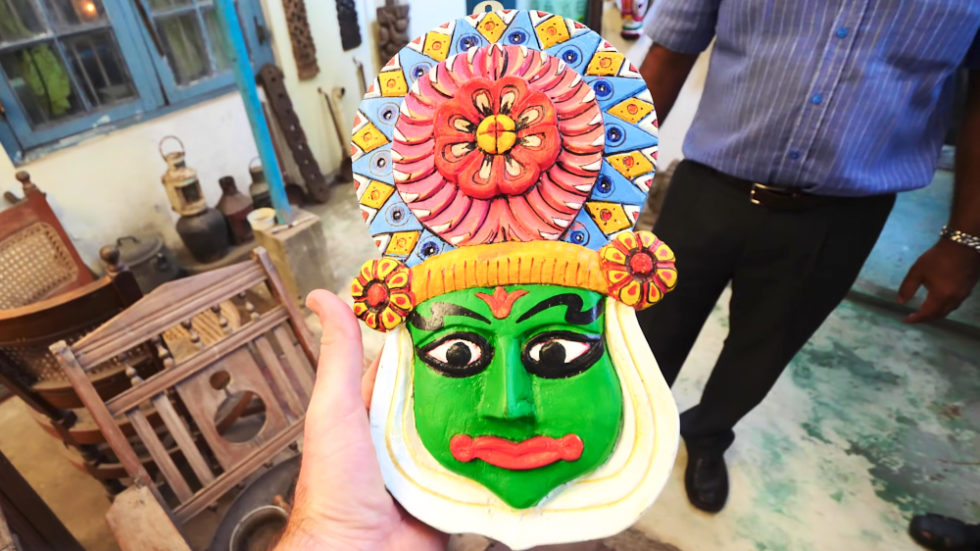 We went back to the port area and the fish market to buy some fish. The market had been pretty empty earlier, but now it was full of people. Ebbin started negotiating by kilo. There were king fish, red snappers, groupers, sea breams, and more. We got a sea bream for 280 rupees/$3.68 USD. Then, we crossed to a restaurant where they’d cook it up for us for a fee. 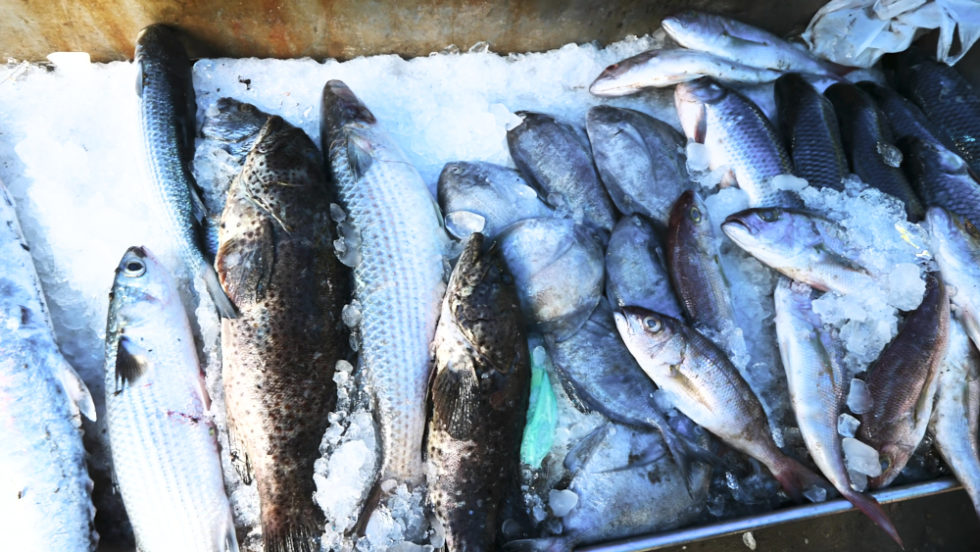 The restaurant had an open-air concept with outdoor seating and covered seating. The fish had been grilled with some masala on it. We also got prawn roast, dal, and rice. I grabbed some rice and the dal, prawn roast (which came in a tomato paste sauce with curry leaves), and half of our sea bream.

I started with the sea bream and made sure there were no spines. It was so soft and the masala contained lots of nice spices, but it wasn’t spicy at all. I ate some of the meat off the spinal cord. This is what I love about southern India. You get delicious fish with masala! Then, I ate the fish eyeball, which was a little tough but yummy. This meal was such a bargain. We only paid 280 rupees for the fish and another 150/$1.97 USD at the restaurant. 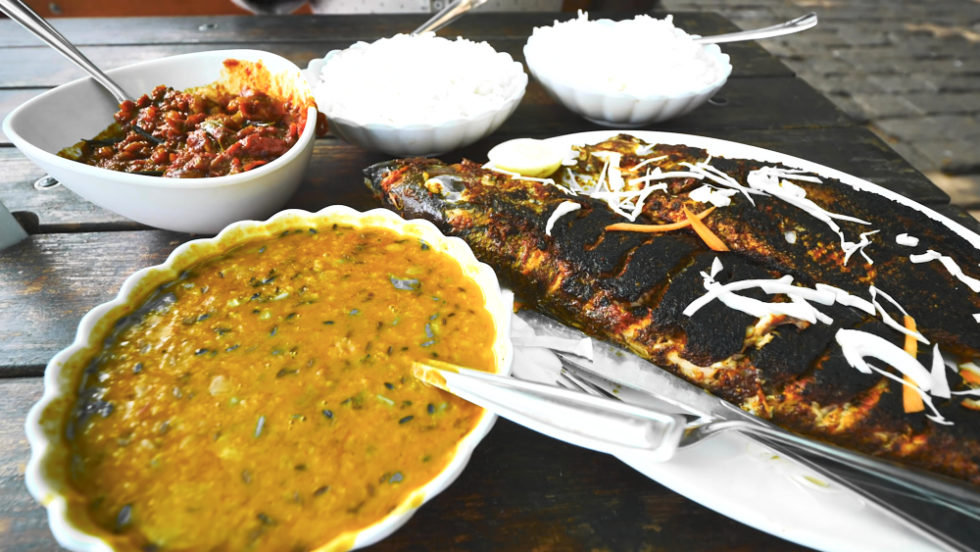 Then, after I pulled a few fish spines out of my mouth, I went for the rice and dal. I mixed it up with my hands and added a prawn. The prawn had a delicious masala on it as well and I loved the dal. The combination was fantastic. The food in India is always top notch, and this Fort Kochi Indian food was no exception. I eat it every day when I travel there, and I never eat anything that doesn’t taste bad! Then, I mixed all of the rice, dal, and prawn roast together. It was out of this world! 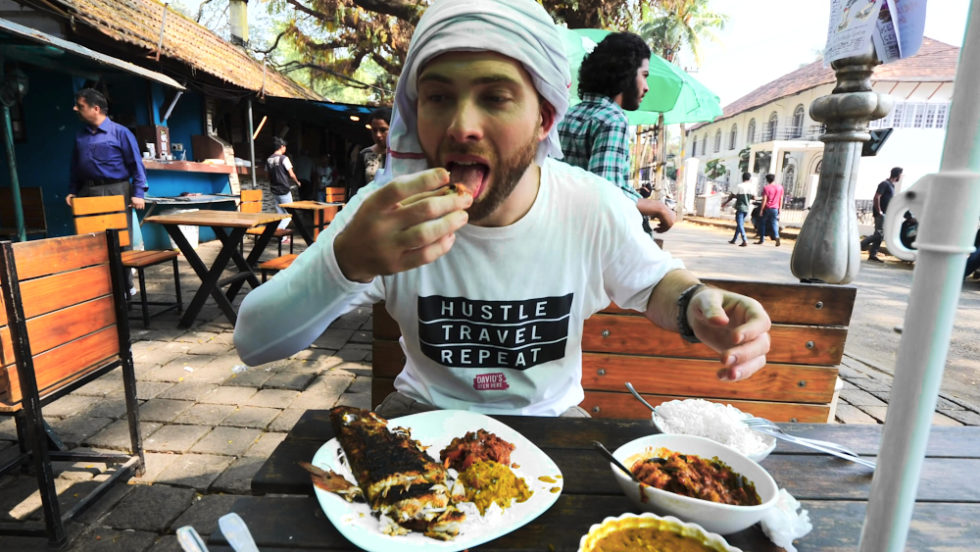 What an awesome morning in Fort Kochi! Fort Kochi was amazing, from the Indian food tour to the attractions to the symbol of Kerala, India: my Kathakali mask! Huge thanks to Ebbin for bringing me out here. Follow him on Instagram and check out his food and travel YouTube channel! I also have to give another shout out to my friends at the Coral Isle Hotel, who helped my time in Kochi go super smooth!

I hope you liked coming with me on my Fort Kochi Indian food and attraction tour in Kerala, India! If you did, please give this video a thumbs up and leave a comment below. Also, please subscribe to my YouTube channel and click the notification bell so you don’t miss any of my travel/food adventures around the world!