When I traveled to South Korea in May of 2019, I had no idea the treat my taste buds were about to experience. I had heard that Korean food was good, and I had even tried some before, including during my trip to Japan earlier in the year. More on that later. But what I found in this Asian peninsula blew me away, especially the Korean foods you must eat in Daegu. 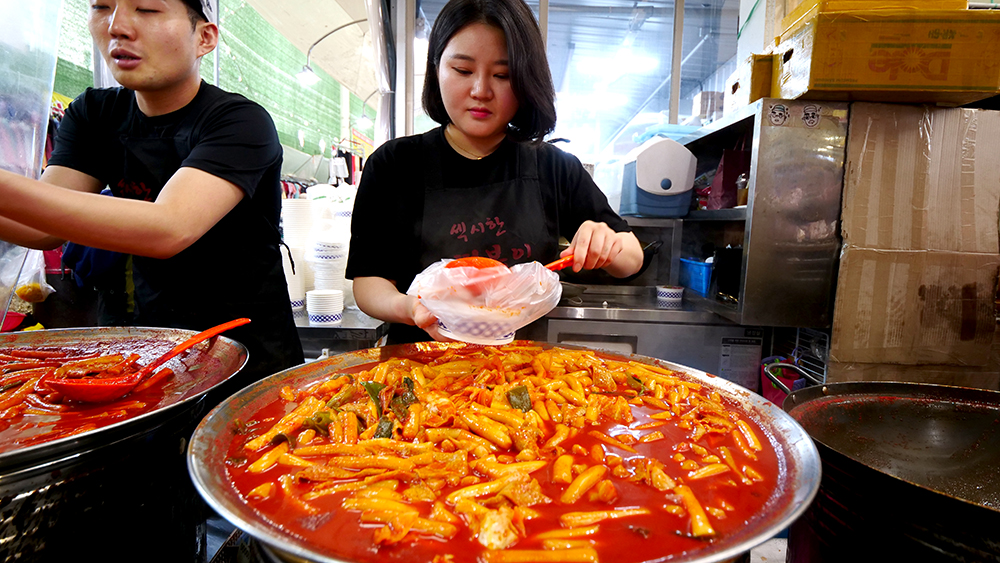 Even though my buddy Sam and I had less than a day in South Korea’s fourth-largest city, I tried to dive into as much food as possible. Korean food is so diverse. There are hundreds of varieties of kimchi alone, which range from mild to inferno-level spicy! The meats and seafood are tender and fresh, and the vegetables are out of this world. Come along with me as I take you on a tour of the best Korean foods in the city. These are the Korean foods you must eat in Daegu, South Korea. 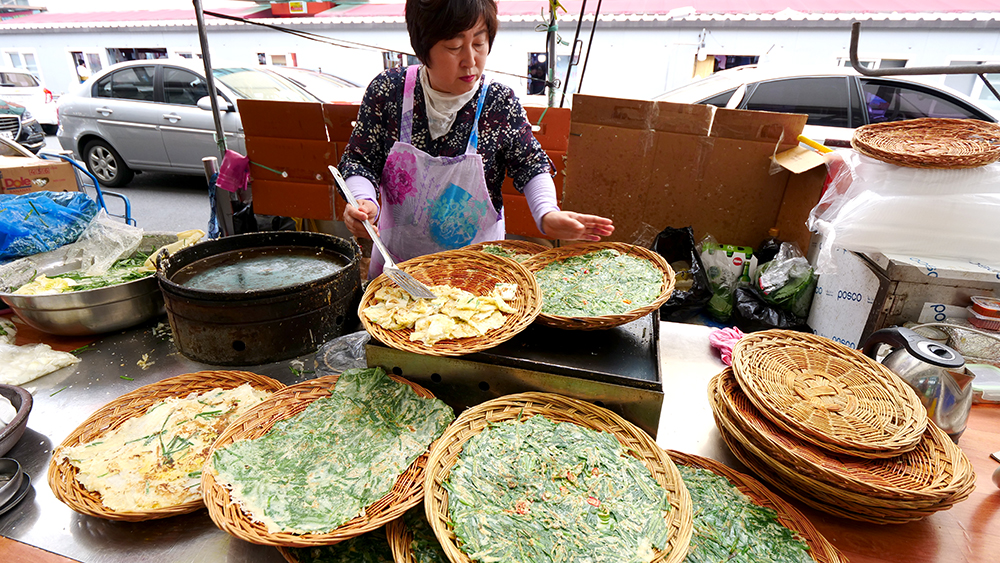 One of my favorite things about Korean cuisine is the abundance of savory pancakes. I had the pleasure of trying my hand at making one called haemul pajeon early in my trip. But the pancakes I tried at Seomun Market in Daegu were easily the best I had during my time in South Korea. 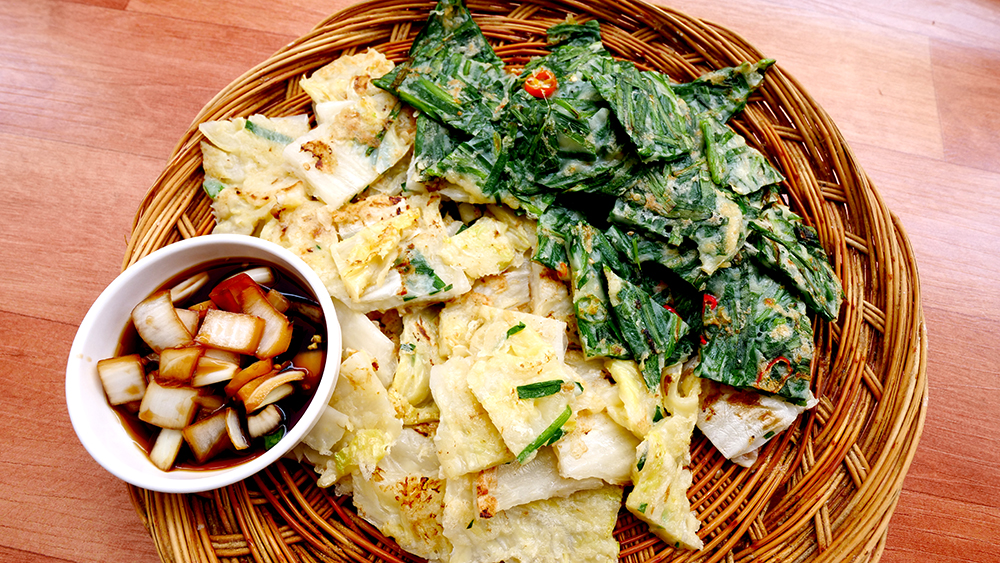 The first of the two pancakes was a chives-and-chili variety, known locally as buchu-jeon. This pancake is almost all chives, with just enough batter to hold it all together. The chilies gave it a nice pop of heat (something that’s very common in Korean cuisine), and the chives were super fresh and full of flavor. It was extremely tasty, especially when dipped in the soy-sauce-and-onion mixture it was served with. I loved how healthy it was! 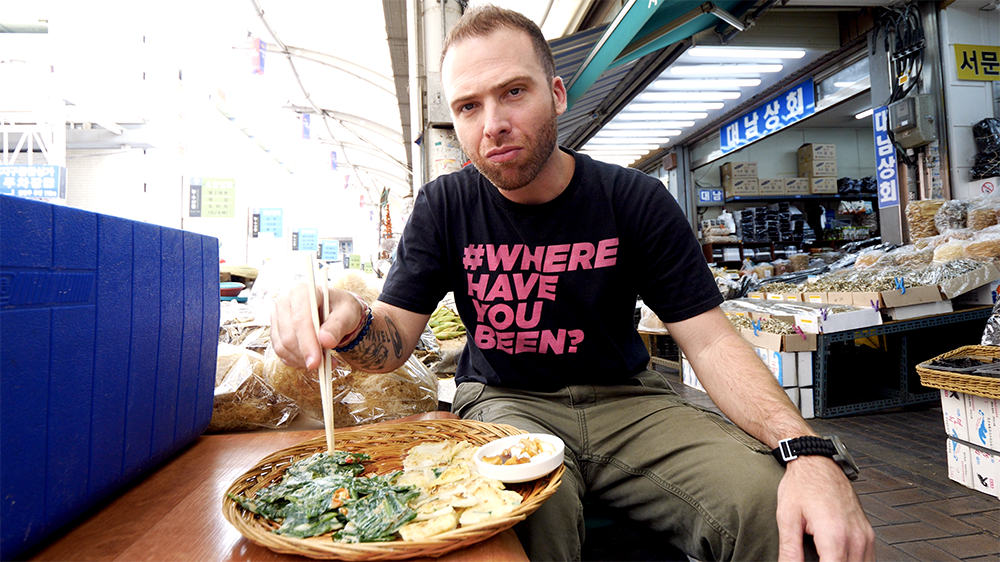 The second pancake was baechu-jeon, or a Napa cabbage pancake. It was moist and had a very nice, fresh crunch from the cabbage. And while I prefer my Korean cabbage to be fermented with some spice, it was another extremely healthy dish. That said, it’s hard to top the buchu-jeon, which is easily one of the top Korean foods you must eat in Daegu!

Check out the Top 3 Places to Eat Japanese Street Food in Tokyo, Japan 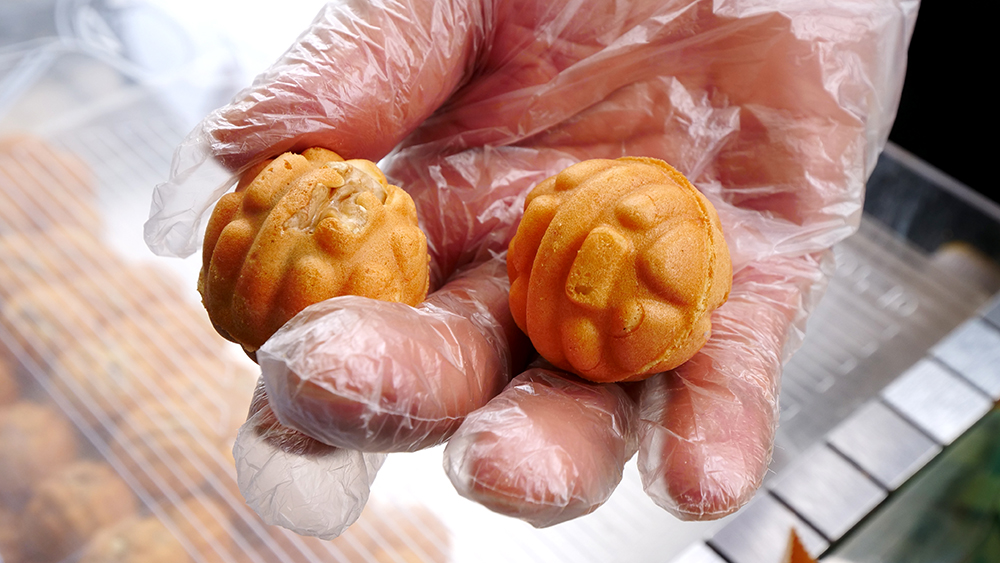 Speaking of tasty treats you have to try at the historic Seomun Market, I highly recommend you try the hodu-gwaja. This is a ball-shaped cookie or pastry made from waffle batter. Inside, you’ll find a walnut and quite a bit of sweet red bean paste, which is a popular filling in Korea, Japan, and China. 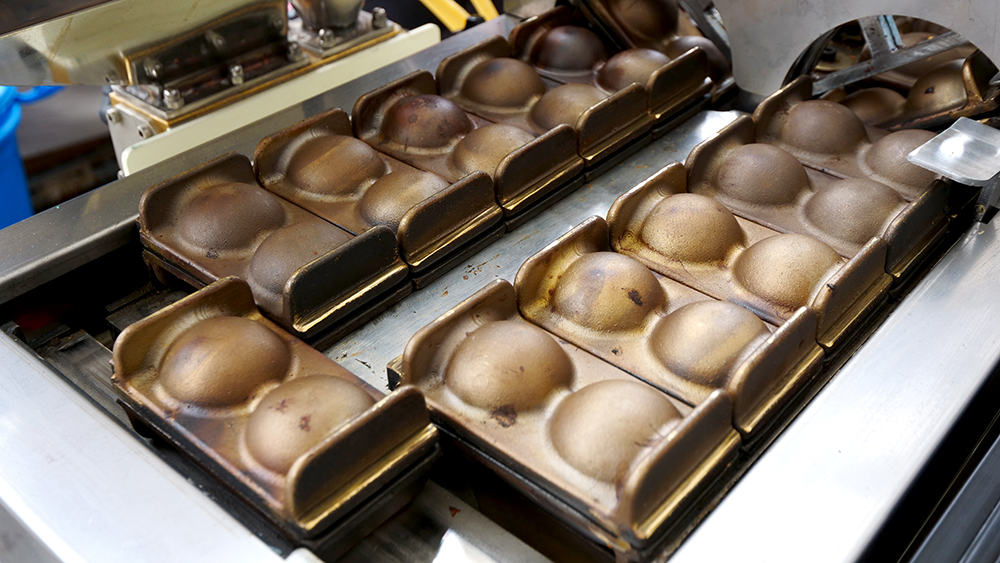 I’m not usually much of a sweets guy—I prefer savory dishes—but this is one sweet I can get behind! The combination of the waffle batter, the smooth red bean paste, and the nutty walnut is near-perfect. Their compact size also makes for a great snack you can take with you on the go! 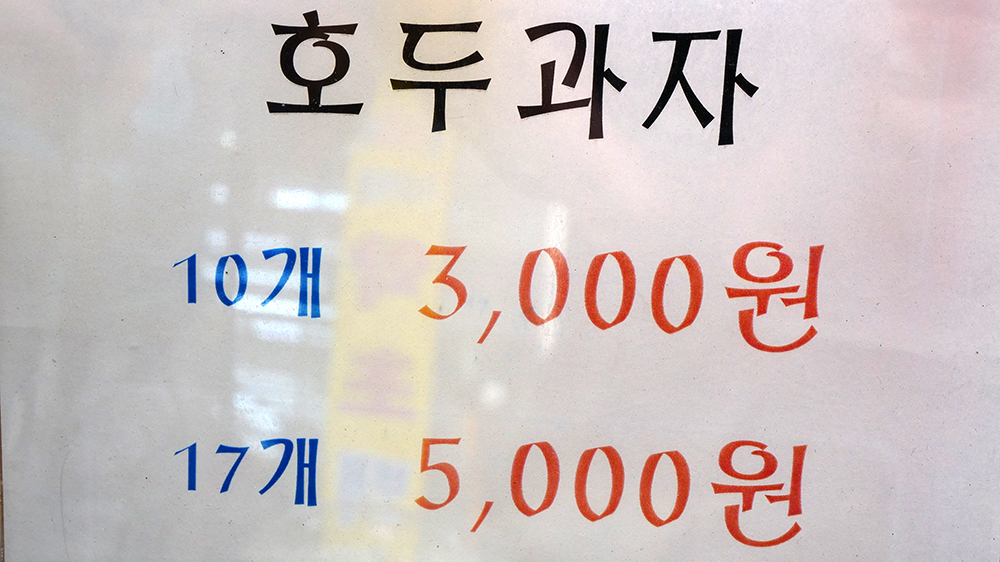 Check out the Top Places to See and Eat at in Osaka, Japan 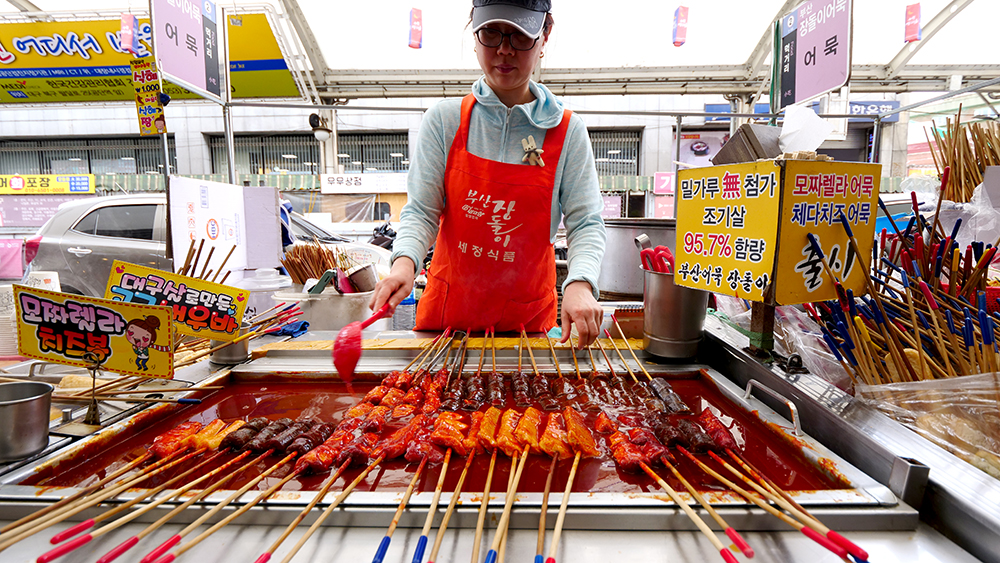 Technically, these are three dishes and not one, but you can get them all at the same stall in Seomun Market. They’re great when enjoyed back-to-back, but first, let’s dive into what they are. 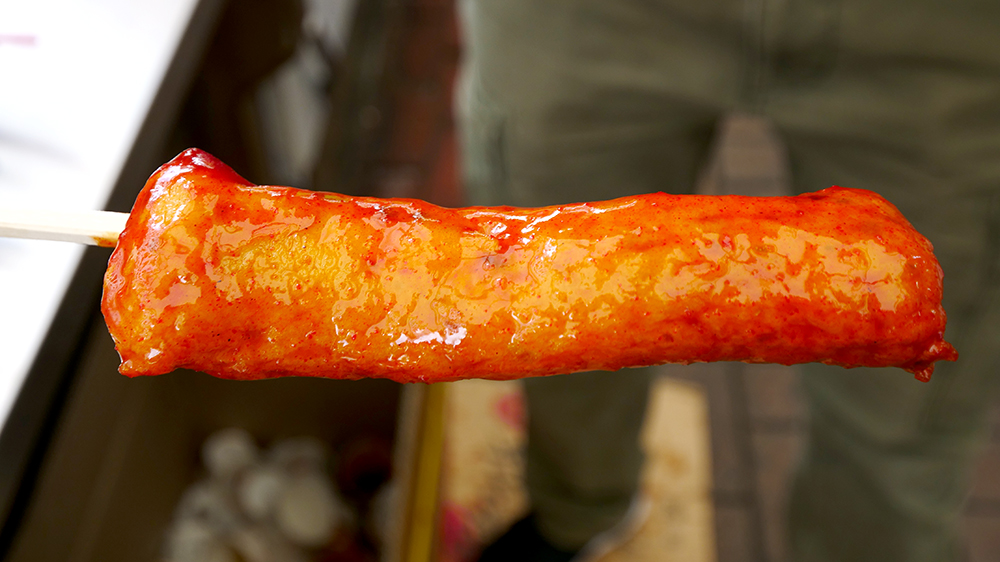 Tteok-bokki is an extremely popular Korean street food dish made of dense rice cakes in a spicy, red sauce called gochujang. I initially tried it months earlier at Ameyoko Market in Tokyo with my friend Shinichi and fell in love with it. However, the Korean variety is even tastier! The kind I had at Seomun Market wasn’t extremely hot like others I tried in Korea, but it certainly had a spicy kick! Get one for just 500 won, or just $0.42 U.S. 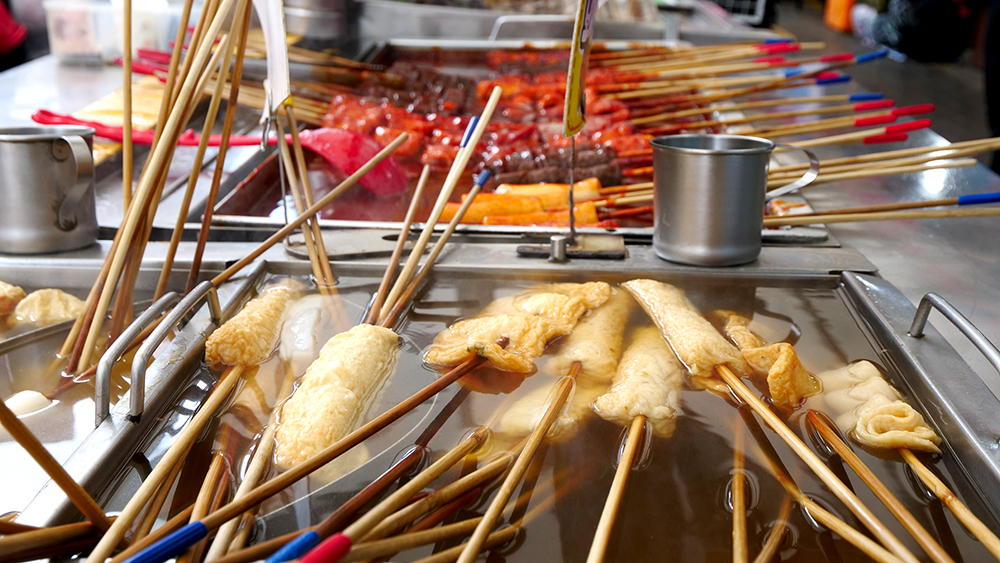 The next Korean food you must eat in Daegu is the odeng, which is a spongy fish cake on a skewer. It was cooked and served in the same sauce as the tteok-bokki and had notes of lots of delicious herbs. The sauce gave it a nice punch of heat and the different flavors made my mouth water instantly. At just 1,000 won ($0.82 U.S.), it’s practically a steal! 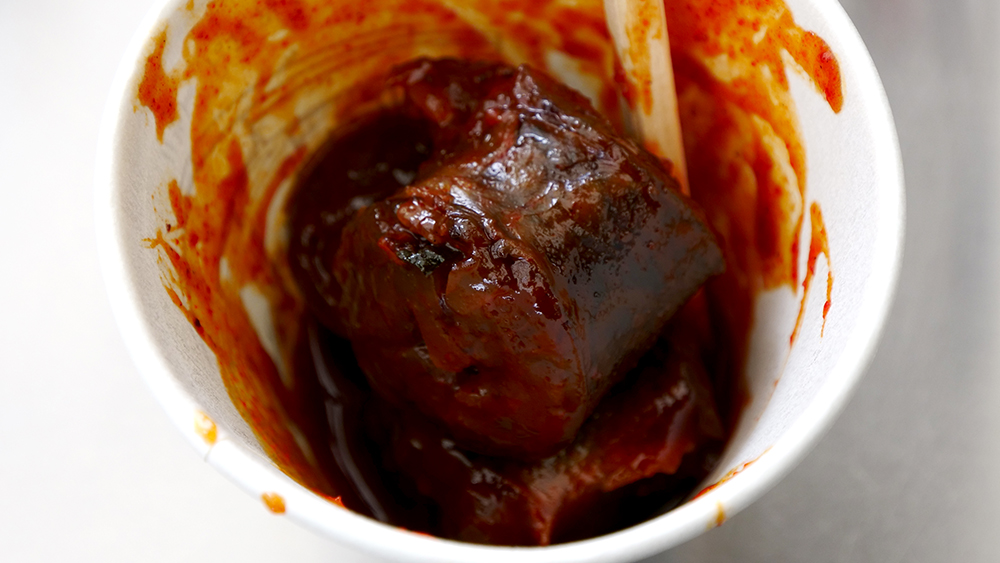 The next dish, sundae, is not an ice cream dish, regardless of how it’s spelled. This dish is a spicy, pork blood sausage. I’ve been a huge fan of the Argentine blood sausage called morcilla all my life, and I seek out the local version nearly everywhere I travel. 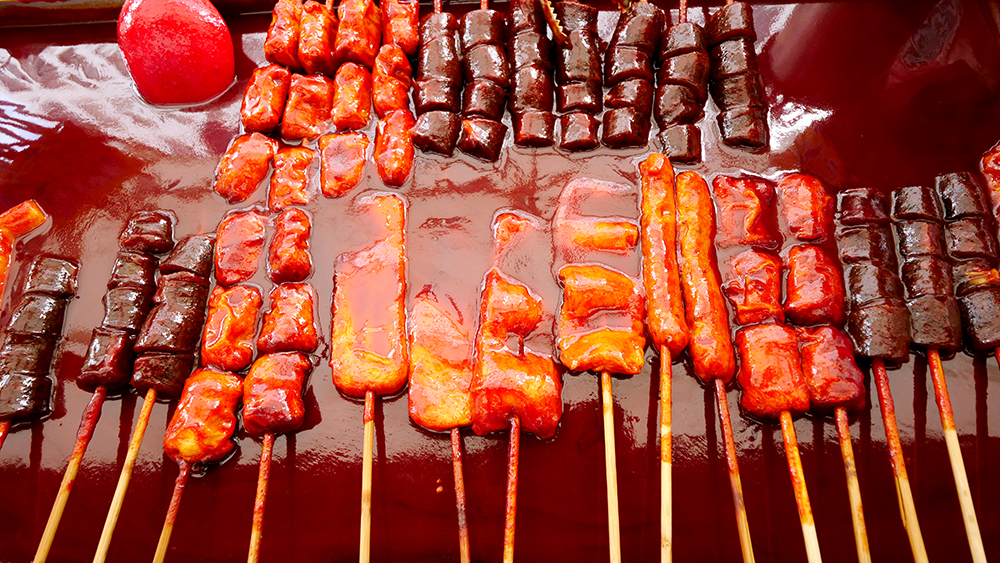 The Korean version was so meaty and had a chewy, pleasant texture. It was hot for sure, so be prepared to singe off a few taste buds, but it is so worth it! Like the odeng, the sundae only cost 1,000 won, or $0.82 U.S. Try not to let the idea of sausage made from meat and blood turn you off. Trust me, it’s one of the best Korean foods you must eat in Daegu!

Check out the Top 15 Things to See and Eat in Shanghai, China 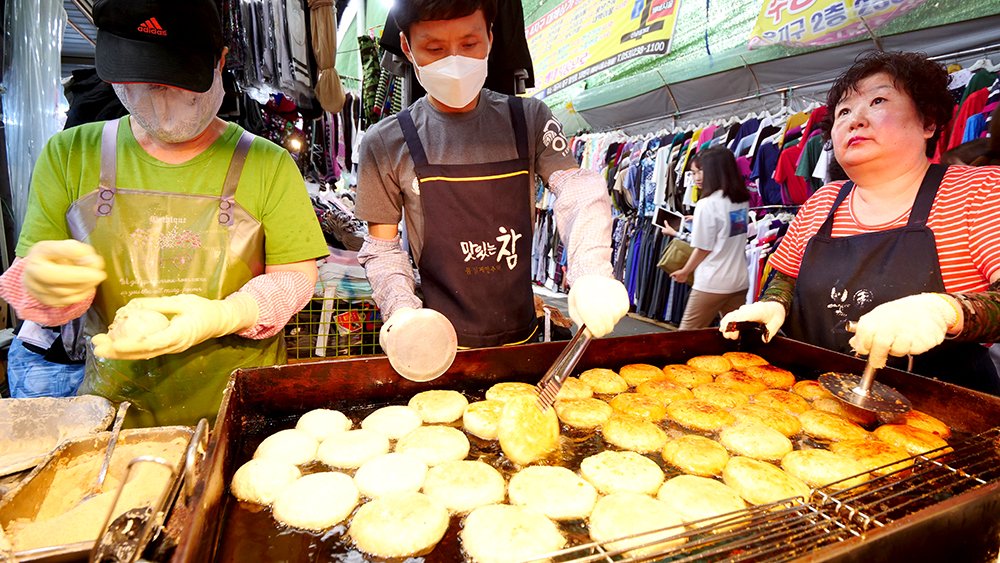 While I mentioned earlier that I usually don’t have much of a sweet tooth, I made another exception when I came across Seomun Market’s hotteok. Hotteok is a doughnut-like fried pastry that is served covered in sugar and topped with seeds. They only cost 1,000 won, so they’re very inexpensive. 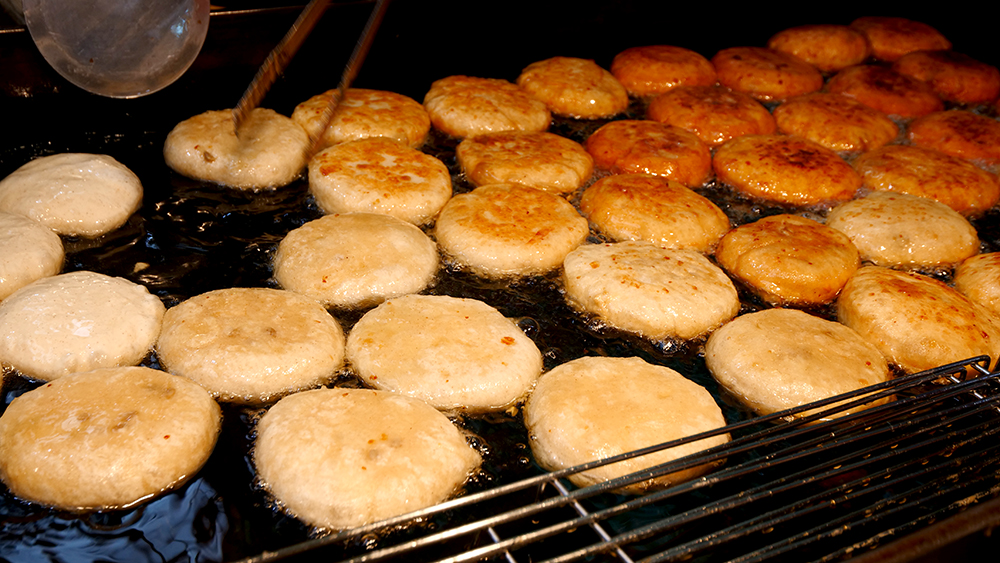 They’re also served scorching hot, so give it a few minutes before you take a bite. There’s nothing quite like a fresh pastry, is there? The hotteok was cloyingly sweet, almost too much so. I loved the contrast of its crispy exterior and soft, fluffy center. It reminded me of the elephant ears you’ll find at fairs across America. Try one the next time you’re in Daegu. You’ll thank me later.

Check out the 5 Places You Must Eat at in Kyoto, Japan 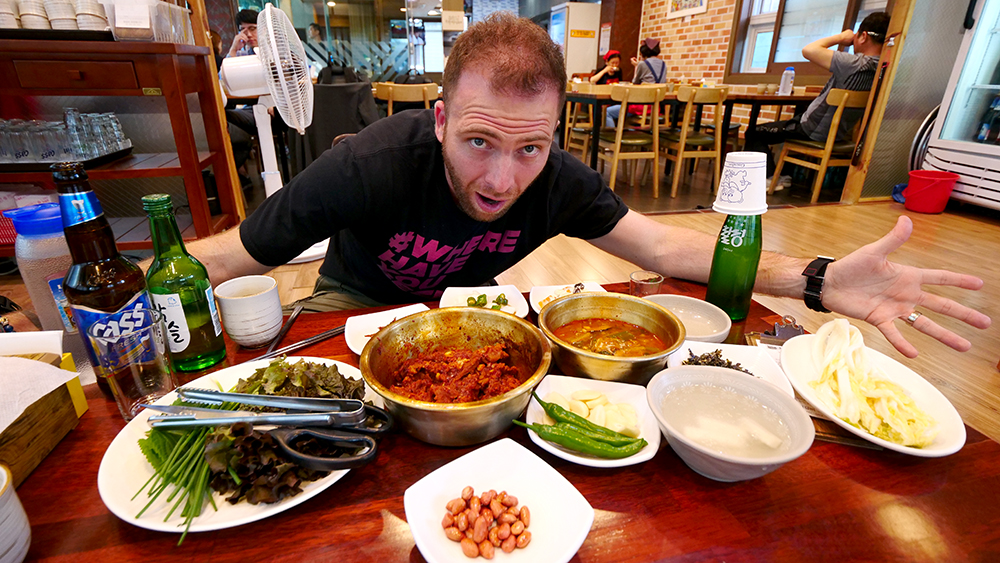 Last but not least on my list of Korean foods you must eat in Daegu is galbi jjim. Galbi jjim is a braised beef short rib dish that was invented in Daegu back in the 1970s. It is now so in-demand that there is an entire street in the Dongin-Dong area where you can find a dozen restaurants serving it! 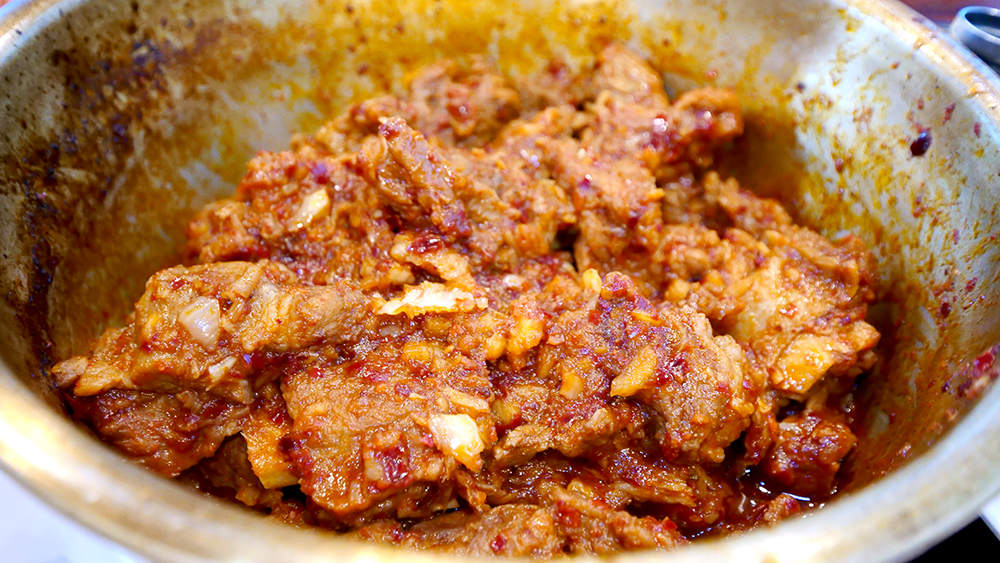 Of all the restaurants along the Galbi Jjim Street, I recommend Bongsan Jjimgalbi. Their braising process left the short ribs so juicy and tender that they practically fell off the bone. I was in Korean beef heaven! The way the spice hits you with a bit of sweetness and makes your tongue and lips tingle is like nothing else I’ve ever eaten. 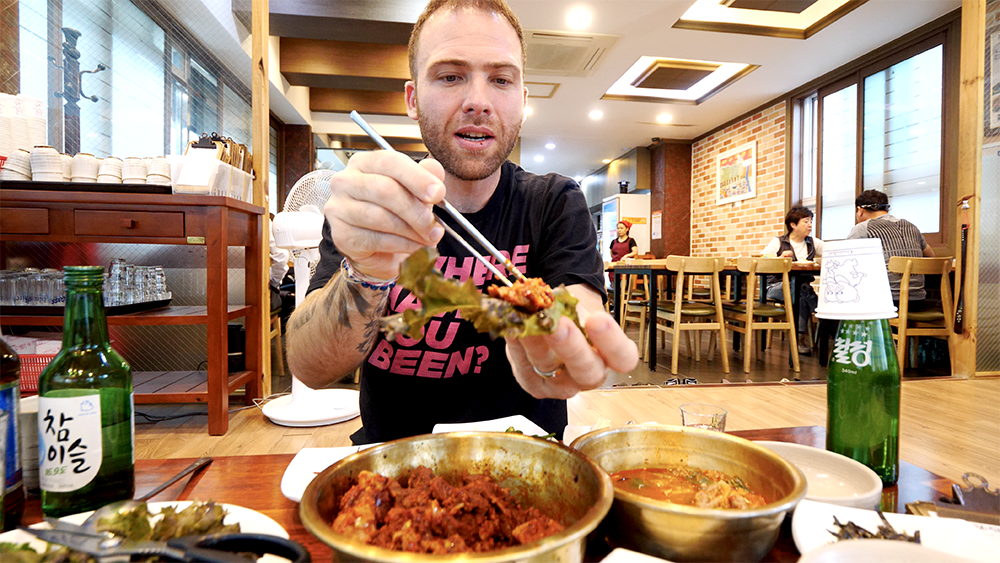 The meat can be eaten by itself or wrapped in a lettuce leaf. I tried it both ways and was blown away by both. This is truly next-level beef. I love American barbecue, but Korean beef ribs are the best I’ve ever had in my life. The tenderness of the meat, coupled with the spicy sweetness of the sauce, is unparalleled. This is one Korean food you must eat in Daegu, without question! 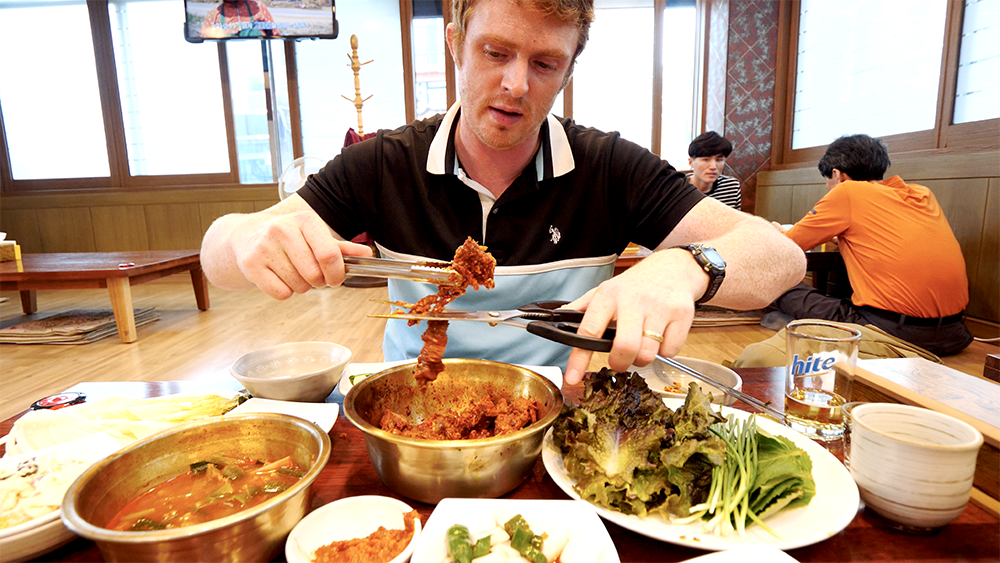 Exploring another country’s food is one of the best ways to get a better feel for the culture and the people. It allows you to expand your palate and your horizons. The food I found in Daegu was a perfect representation of everything I’d found South Korea to be: soulful, unexpected, and delightful. I couldn’t get enough of the remarkable flavors and textures of the dishes I tried while I was there. I hope you feel the same way after you visit! To explore these amazing foods, book a trip to Daegu today! 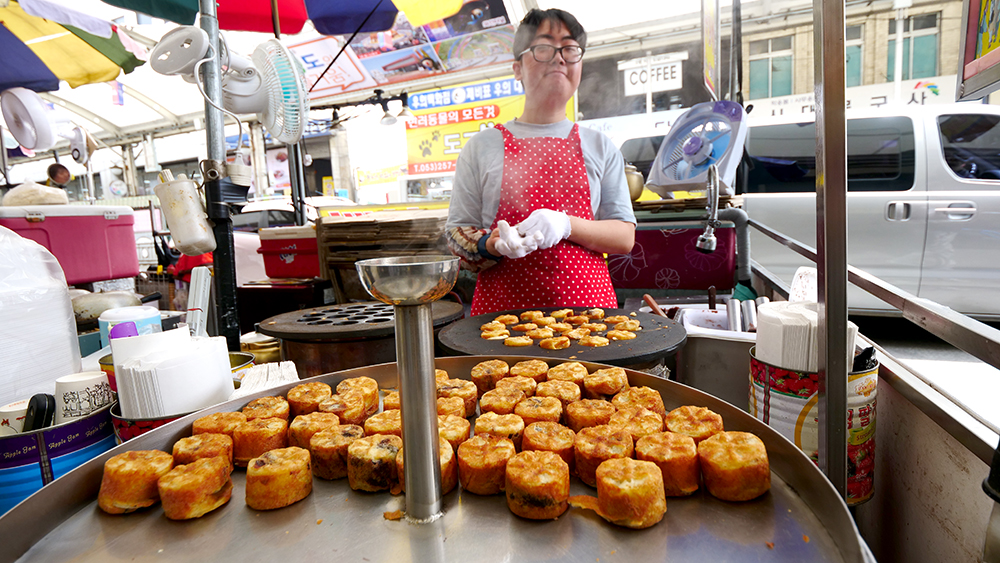 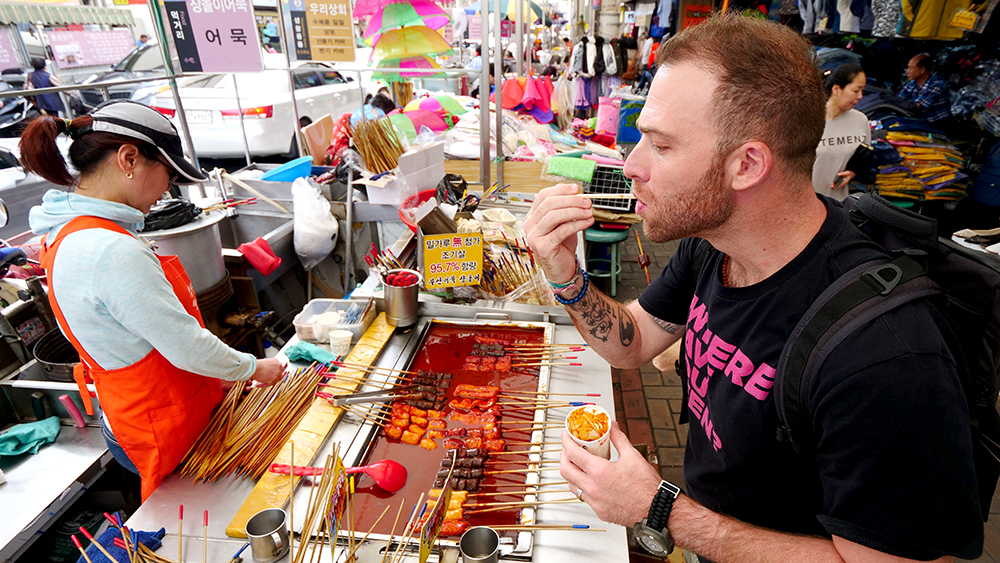