With my final night in Seoul, upon me, my friend Paul and I teamed up and headed out on an epic and diverse Korean street food tour of Myeongdong Street! Come along with us as we sample some of the most mouthwatering street foods the city of Seoul has to offer as my time in South Korea comes to an end!

Myeongdong Street is another entertainment district in Seoul. There, I met up with my boy Paul from Tastes Seoul Good.  This street is the shopping capital of Seoul and a mecca for Korean street food. It’s centrally located, so it’s very easy to get to. Myeongdong Street is also very trendy and touristy, which may be a turnoff for some, but I still couldn’t wait to eat and explore!

My diverse Korean street food tour began with a ball of soybeans and fermented honey that’s stretched and pulled into strands and topped with different toppings. Mine was topped with almonds and was insanely good! The flavor was outstanding! It costs 5,000 won/$4.20 U.S. for 8. 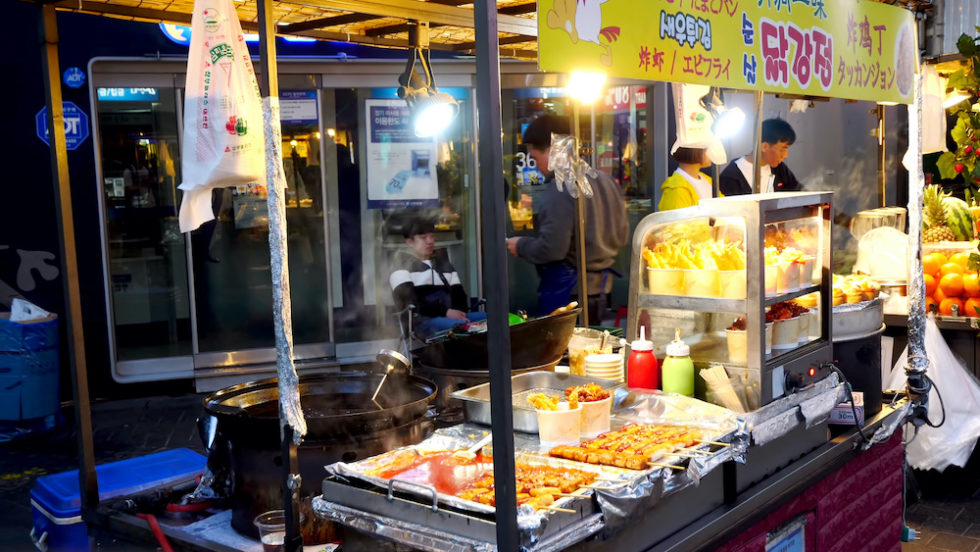 Next was mandu, a pan-fried dumpling with pork and veggies inside. It’s garlicky and full of spring onions. It was so good, and I loved the pork inside. I added some soy sauce, which made it even better! It was also very oily!

As my diverse Korean street food tour continued, we came across samples of many varieties of almonds. They came in a wide array of flavors including fire chicken flavor and wasabi. We tried a hot one, which wasn’t so hot at first, but it hit me a few seconds later! 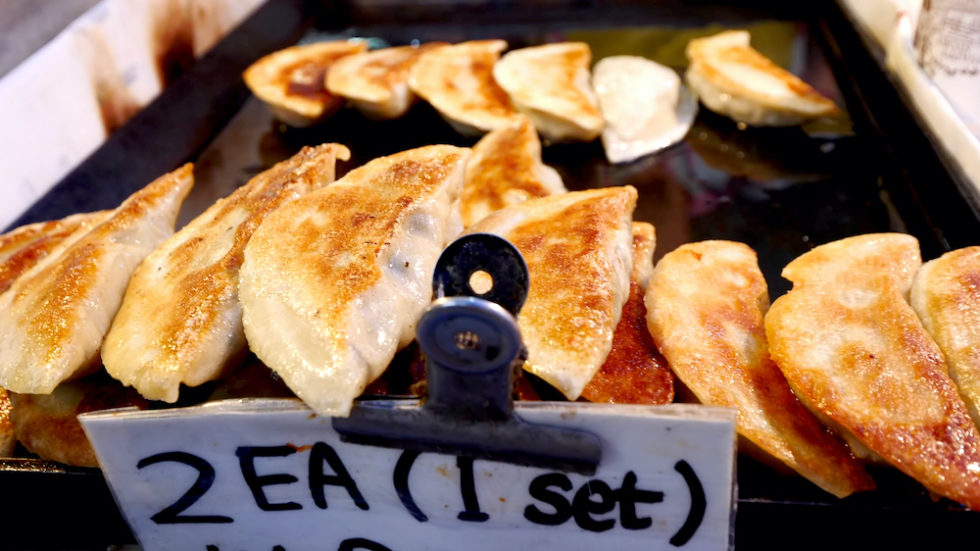 Then I had the wasabi almond, which had a nice sweetness to it. The third one was incredible! It was as if someone has mixed almonds with pop rocks. I’m convinced it’s the best almond in the world! They were so good that I bought a bag for 6,900 won/$5.80 U.S.

From there, we found a stall selling lots of things I’d tried before, like the sundae and tteok-bokki. I wanted to find something different after having them so often earlier in my trip. We continued on past lots of shops catering to women and the K-Pop audience.

Check out the Korean Foods You Must Eat in Daegu, South Korea

Next on our diverse Korean street food tour, we found some Myeongdong Dakgalbi, which is like a Korean hamburger with rice cakes. The vendor covers the beef with lots of stringy cheese. Then, they torch it to melt the cheese all over the meat! 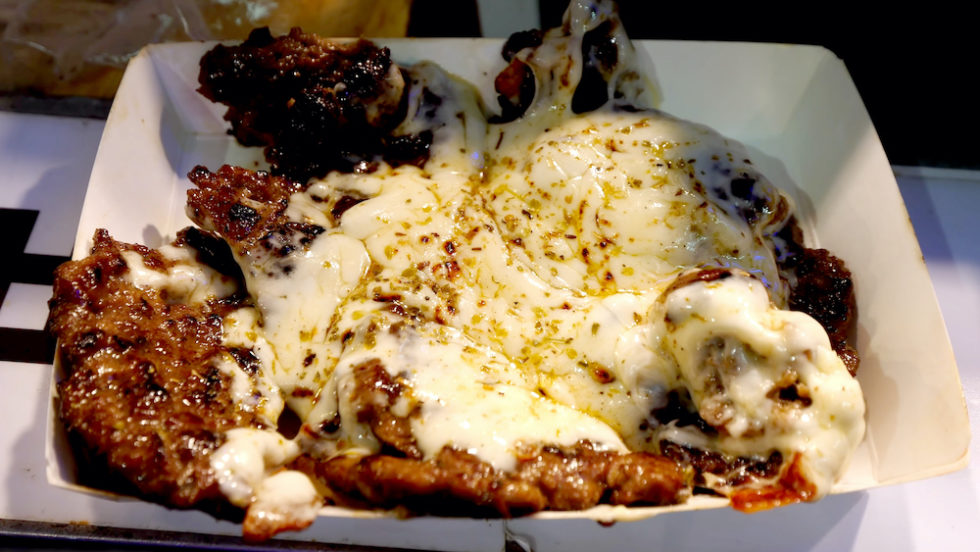 The beef was super tender and had light spices on top. The spices gave it a really nice flavor that complemented the meaty taste and the gooey creaminess of the cheese. It was so bomb! I couldn’t get enough ot it! Then I added some spicy sweet & sour sauce. 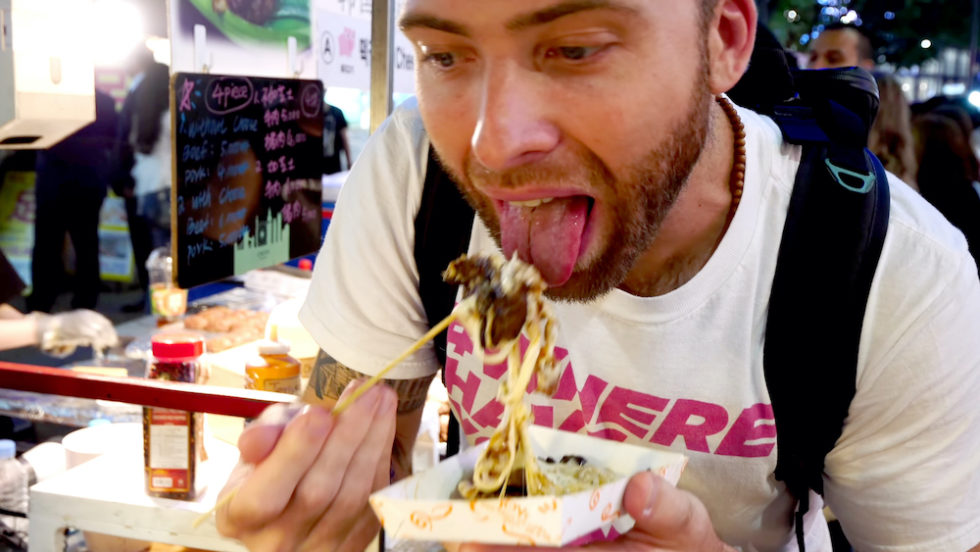 Next up was some gimbap. There were 9 varieties in total. I decided on the one with roe while Paul went with the spicy bulgogi. Mine was so good! It had a tiny bit of spice and I loved the sticky rice!

The roe inside, combined with the rice and crunchy seaweed, was fantastic! Paul’s gimbap contained pork and looked equally amazing. Usually, the gimbap is 6 for 5,000, but you can also get one for 1,000. 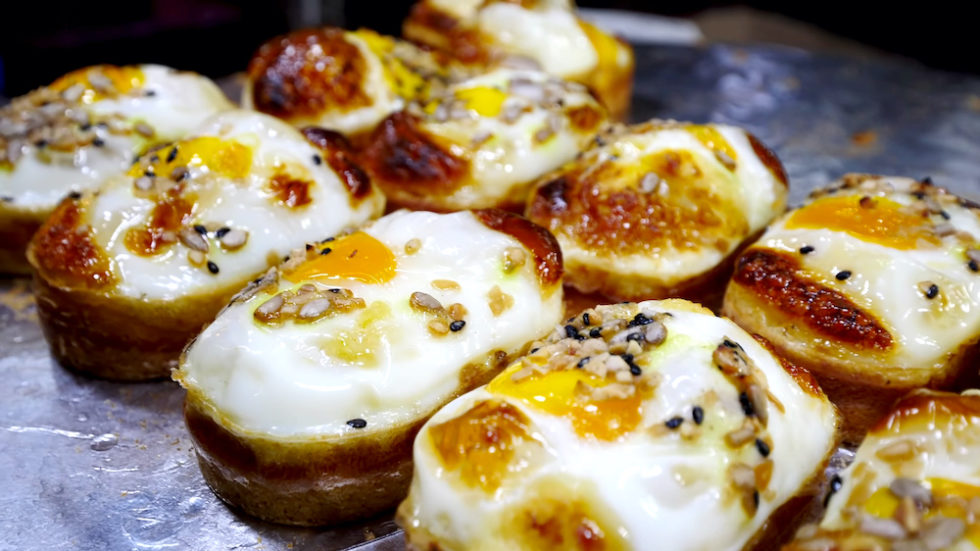 Next, my diverse Korean street food tour continued with an egg bun, which was topped with egg, almonds, peanuts, and sunflower seeds. The bun was sweet and felt custard-like. It was good but very filling! The yolk was fully cooked but my favorite part was the sunflower seeds, which added a whole new flavor!

Next was skewered chicken, which cost 4,000 won/$3.36. You have six different sauces to choose from. I went with the teriyaki. It was crunchy and juicy and was the best chicken teriyaki ever! Then I tried the spicy sauce, which was like the tteok-bokki sauce and was really hot! The barbecue sauce really helped calm down the heat, but the vendor nearly set himself on fire! Then Paul tried the Hydrogen Bomb, which he says was super spicy! 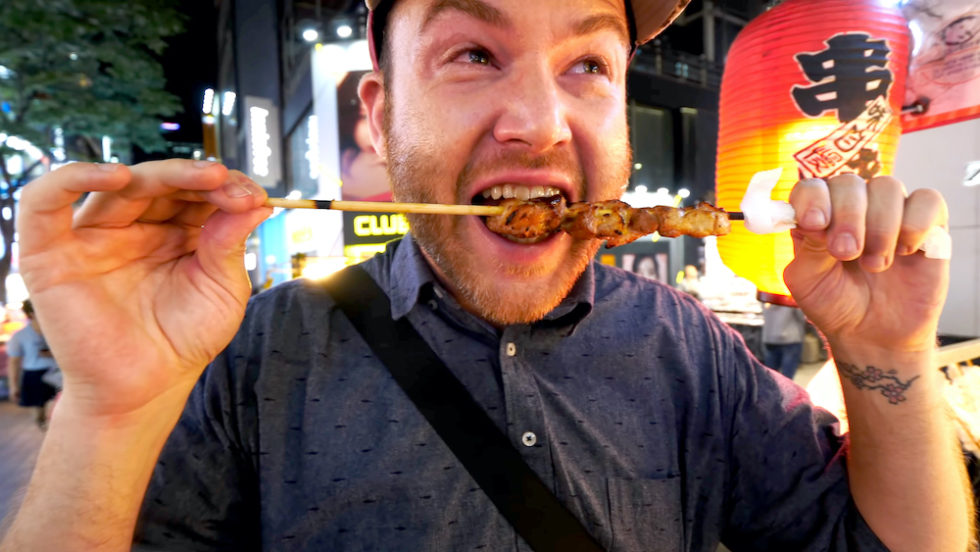 My mouth was still on fire, so we found a juice stand to put the fire out! My juice was super refreshing and the perfect counter to the heat.

Then we headed to Craft Hans, a bar that sells Korean and international beers and food. It had a nice terrace and a garden. Paul went with a citrusy Weizen, while I went with a Hans IPA, which was hoppy and smooth. And just like that, my diverse Korean street food tour of Myeongdong Street was over! 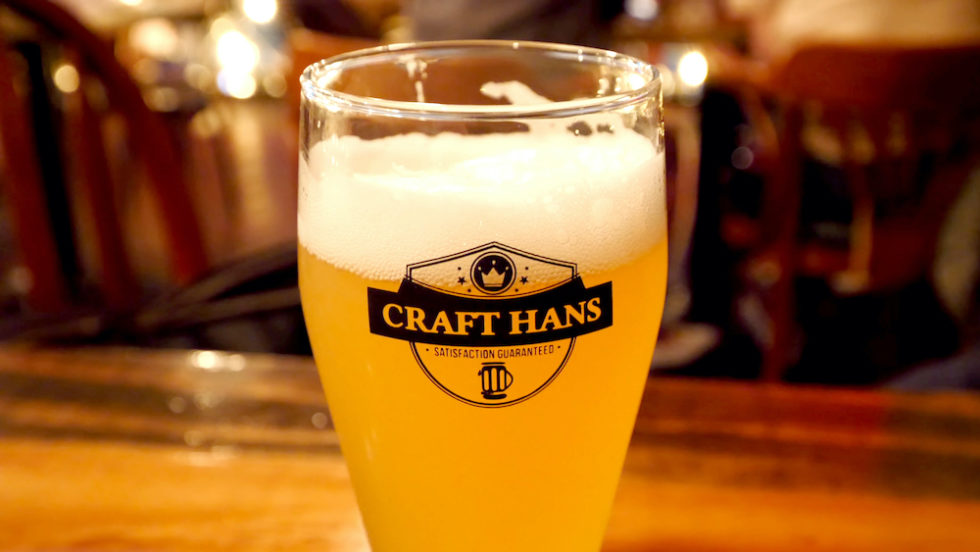 What a night! I hope you enjoyed coming with me and Paul on our diverse Korean street food tour of Myeongdong Street! If you did, please give it a thumbs up and leave me a comment below. Also, please subscribe to my YouTube channel and click the notification bell so you don’t miss any of my upcoming travel/food adventures from around the world!