After arriving in the riverside town of Albina, Suriname, which lies just opposite French Guiana along the banks of the Maroni River, my guide and I made the boat trip north to Galibi along the Atlantic Ocean. There, we would have some amazing Surinamese seafood and look for some leatherback turtles! I couldn’t wait to start the next leg of my Surinamese adventure! 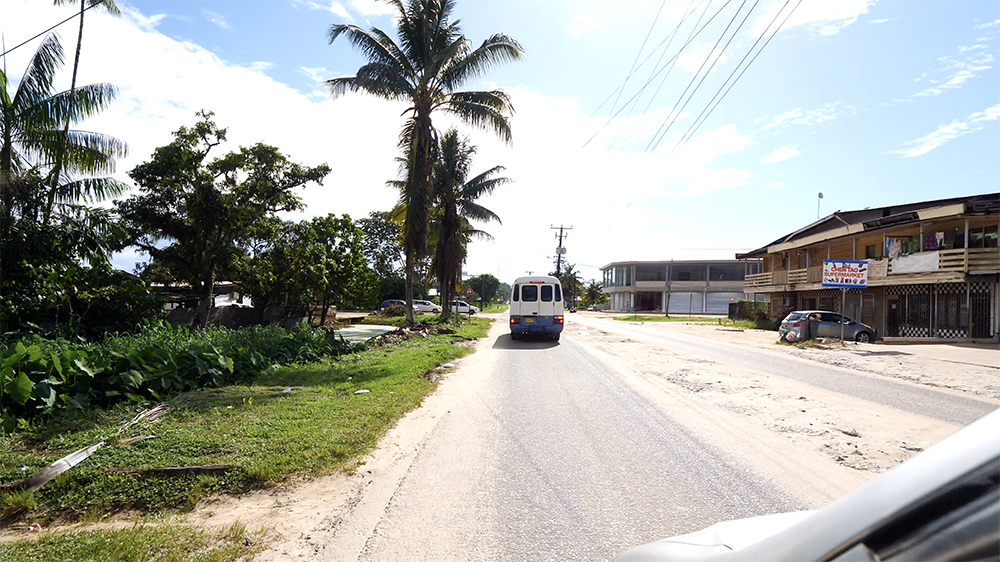 My boy Imro from Jenny Tours and I started by driving through Albina to get some gas for our boat driver. I had to be careful to not really film the people; they don’t really like it. 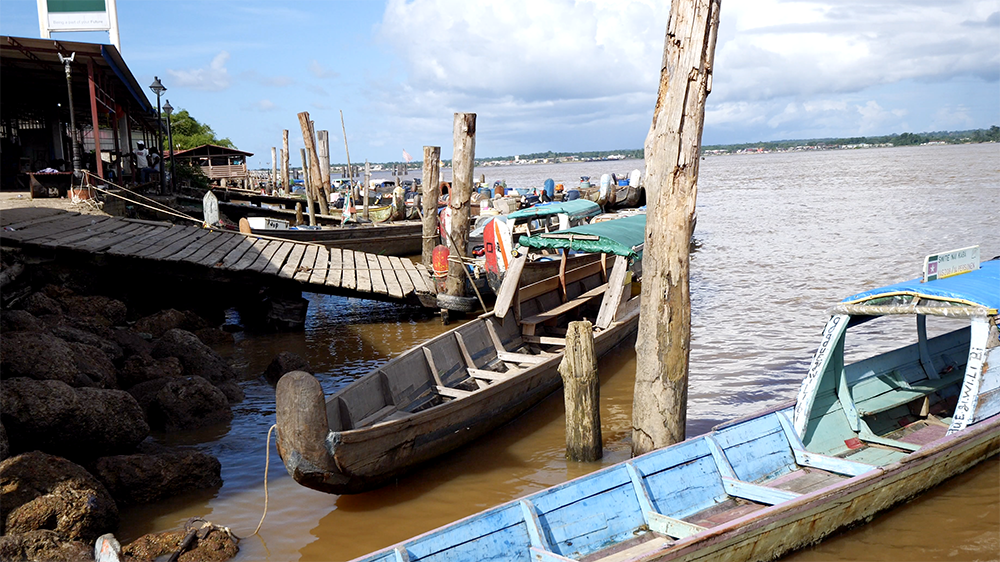 We arrived at the gas station. I had never been to one like it. It was right along the river and had a great view of French Guyana across the water! The lush greenery of French Guyana had a real jungle feel and the whole area reminded me of places I’ve visited in Africa. We bought 55 liters of gas for 350 SRD, or a little under $47 USD. We contracted the boat driver to ferry us for the next 24 hours.

Check out the 10 Things to Do in Curacao

Albina was blowing my mind. In addition to Africa, it reminded me of certain places in India as well. The beach was barren with the exception of lots of boats and a fallen tree. Our trip would take 2 hours and I didn’t want to burn, so I changed to a light, long-sleeved shirt to cover my arms. 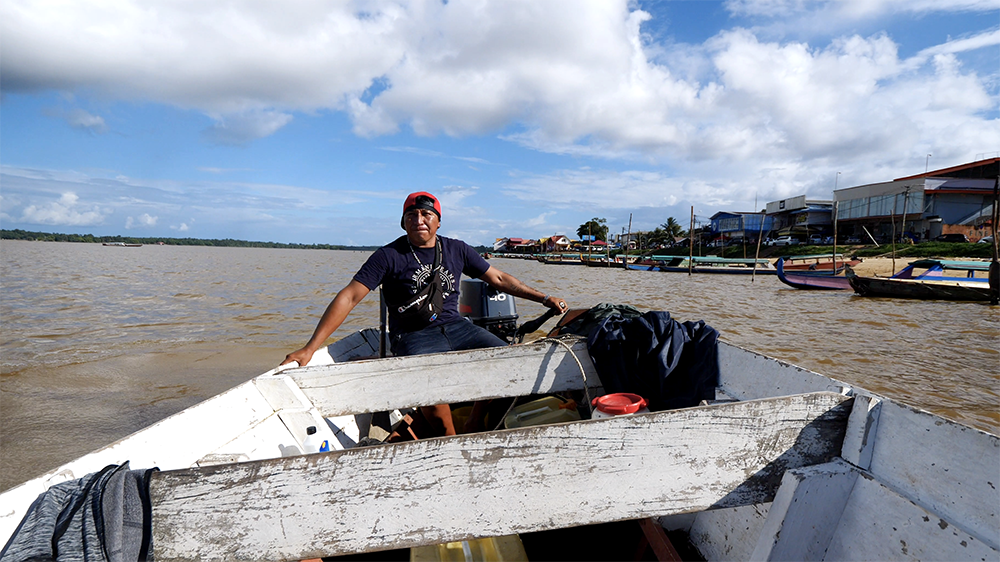 After we set off, my boy Imro surprised me with a Parbo Bier. It was nice and cold! And after a choppy, 100-minute ride, with water splashing all over us, we arrived in Galibi! This was way off the beaten path! 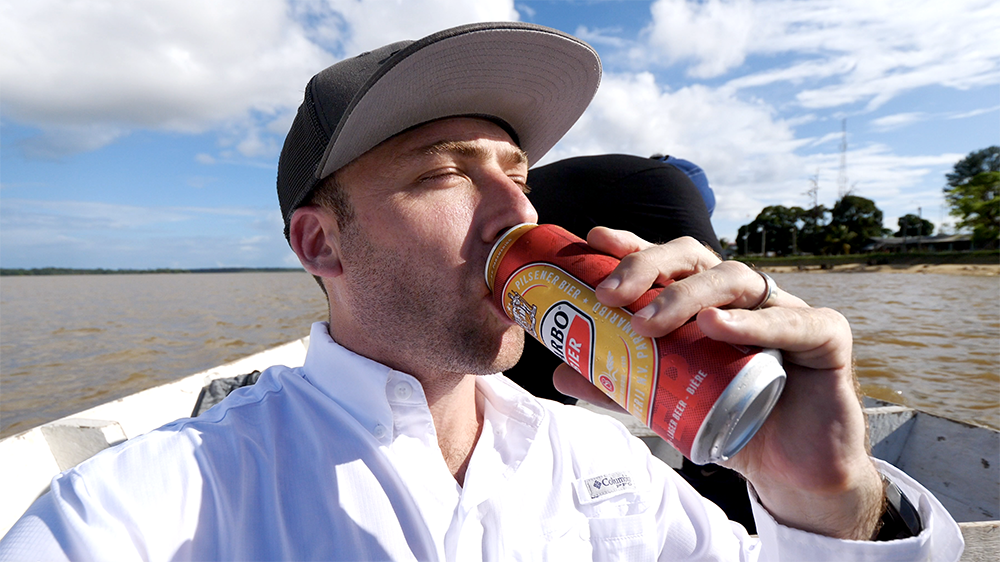 I arrived at my cabin for the night, which contained a bed with mosquito netting. It was all I needed. Then, we headed to go see Imro’s girlfriend, who was cooking some wild boar and amazing Surinamese seafood! We walked along a gorgeous, picturesque beach to get there and passed lots of parked boats along the way. Our boat driver had brought our water, bags, and alcohol, so we carried them the rest of the way.

In addition to Africa and India, Galibi also reminded me of Tortuguero in Costa Rica. It had the same Caribbean-like feel! 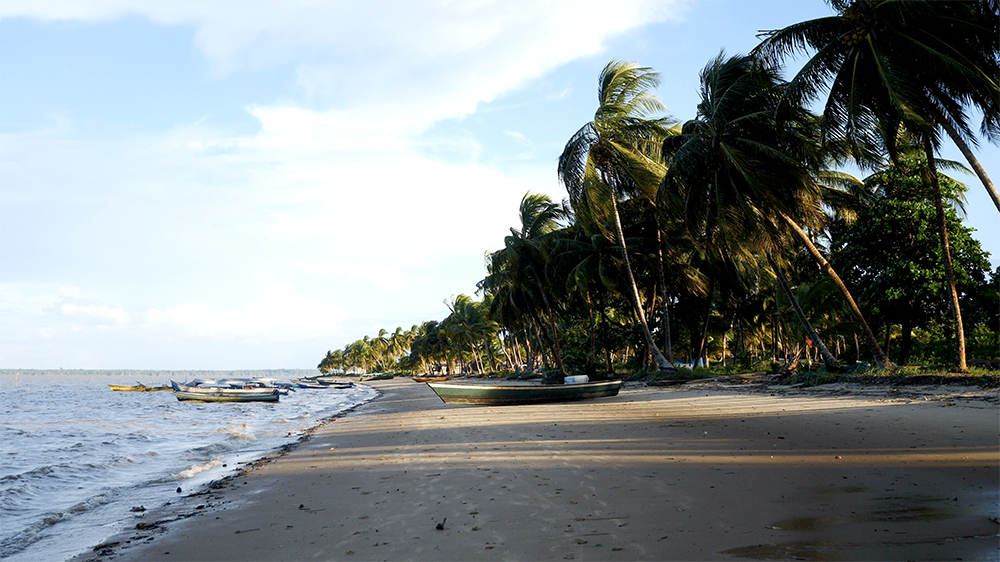 After we arrived, we found lots of food cooking: wild boar in a peppery soup, curry crab, local crab, crab brains, and casaba bread and grains. The soup was spicy, and the boar meat was tasty, tender, and gamy but full of bones. It was a light soup with a real kick to it! 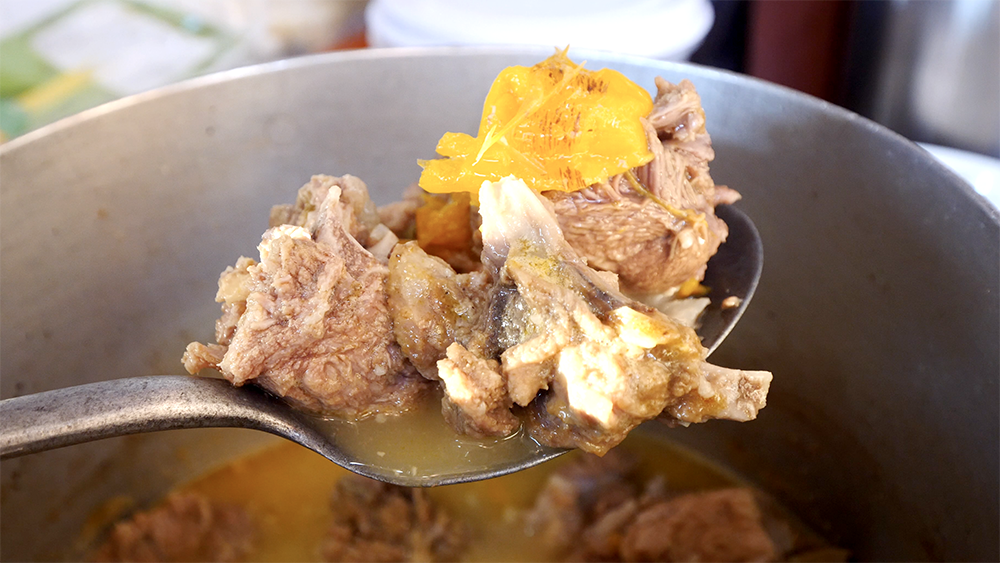 Next was the casaba bread, which was hard and crunchy, with some broth and boar. The casaba grains were hard and earthy. The local rose wine we brought was great to wash it all down! Local village food is the best! The variety was blowing me away! 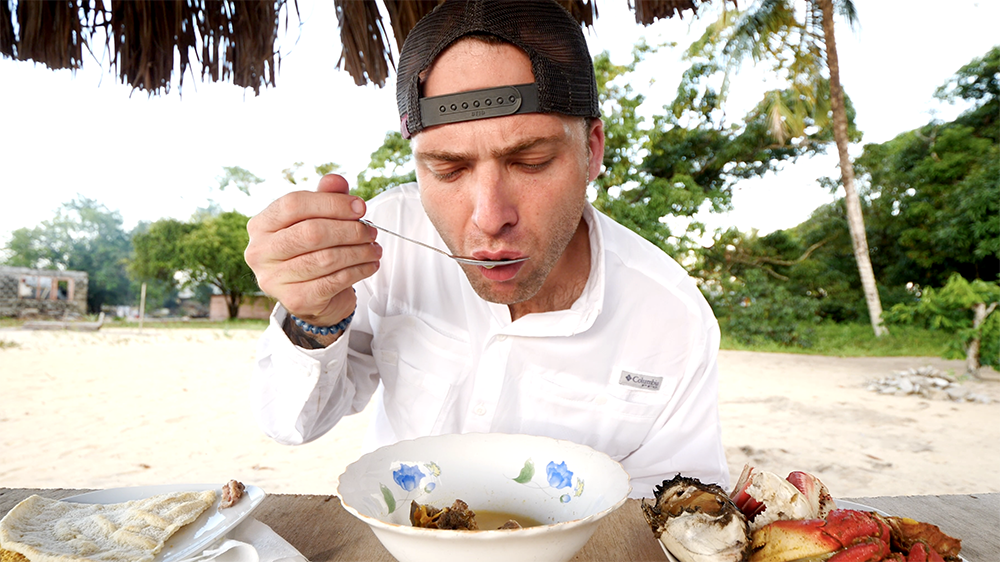 Next were the crab brains, which you eat by adding a bit of salt and dipping the casaba bread into it. It was gelatinous and slimy and wasn’t my favorite. The curry crab was tasty and succulent but not spicy. It took some effort to get to the meat! 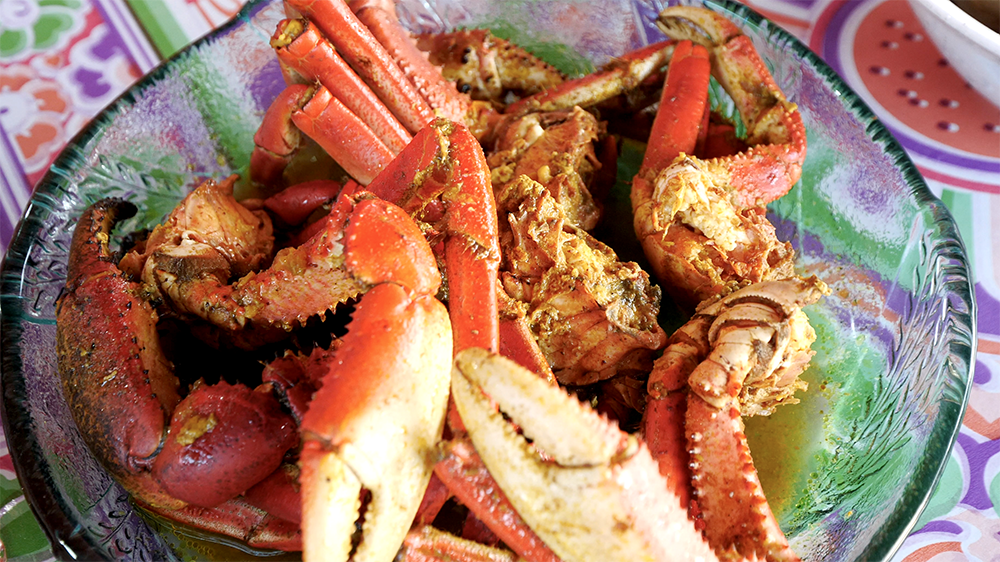 The local crab was fleshy and buttery. The last thing I went for was the claw, which was full of flesh! This meal was such a fantastic example of amazing Surinamese seafood!

After our meal, Imro found a tarantula in a tree! We took another path back to the guest house. On the way, we passed a jungle where there are lots of animals including jaguars! 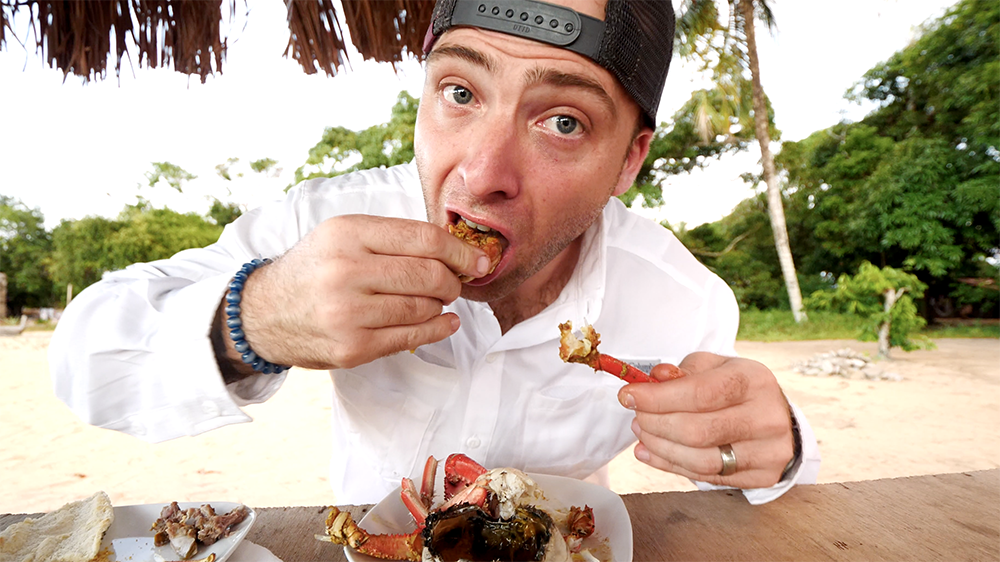 At the guest house, I got snapper in a tomato sauce with rice, and spicy fish soup. The broth was creamy and spicy as ever and the fish’s flesh was super buttery! I had to break the fish up to get rid of the bones. Even after that, I had to be really careful while eating it! 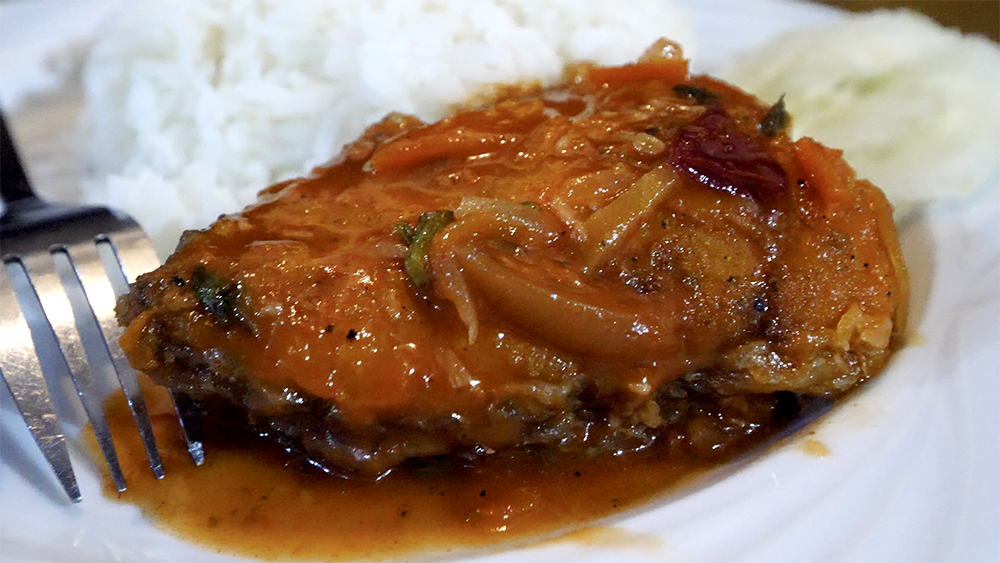 I broke up the other snapper as well. The glazy, tomato sauce was incredible, but I still had to look out for bones. All in all, my dinner was yet another example of amazing Surinamese seafood. I couldn’t get enough of it! 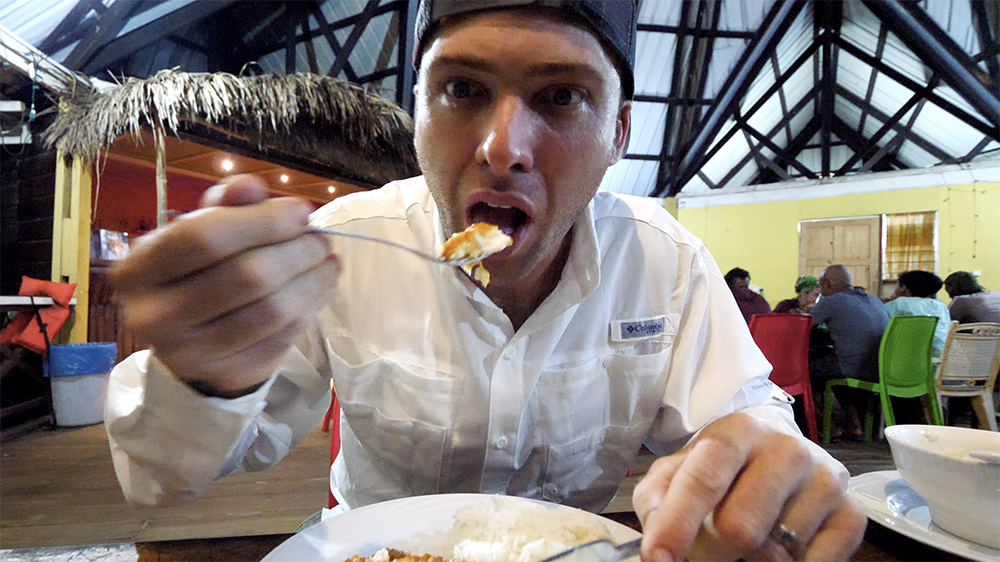 At 8:30 that night, I headed out to look for leatherback turtles! We used a red light so we wouldn’t disturb any animals. In 3 hours, we only saw a caiman and some birds. I recommend visiting between February (the start of sea turtle nesting season) and May for your best chance to see these majestic animals. 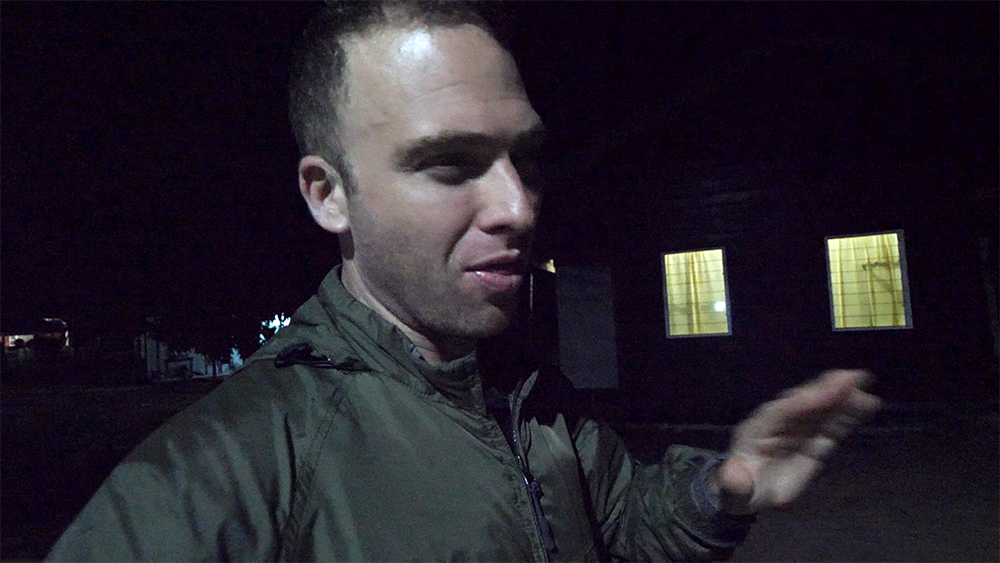 I hope you enjoyed coming with me to Galibi! If you did, please give the video a thumbs up, leave a comment, and subscribe so you don’t miss any of my upcoming travel/food adventures!