After my whirlwind trip up to Galibi and back, I was back along the Maroni River in Albina. Come along with me and my guide Imro from Jenny Tours as we drive back through Paramaribo and find some delicious Indian street food on our way to the Browns-Mountain area! Join us as I continue my in-depth exploration of Suriname and meet a wild, three-toed sloth along the way! 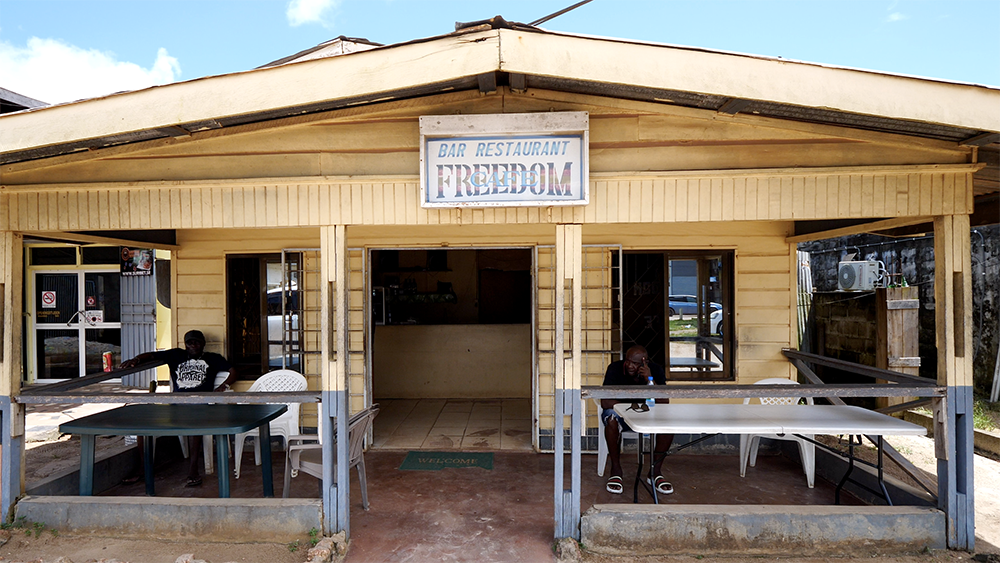 We started with lunch at the Freedom Cafe. It was so hot outside and I couldn’t wait to get inside. I got some pork tail, chicken, smoked fish, rice, chilies, peas, and vegetables. It’s mostly a takeout place, so I was the only one eating inside! 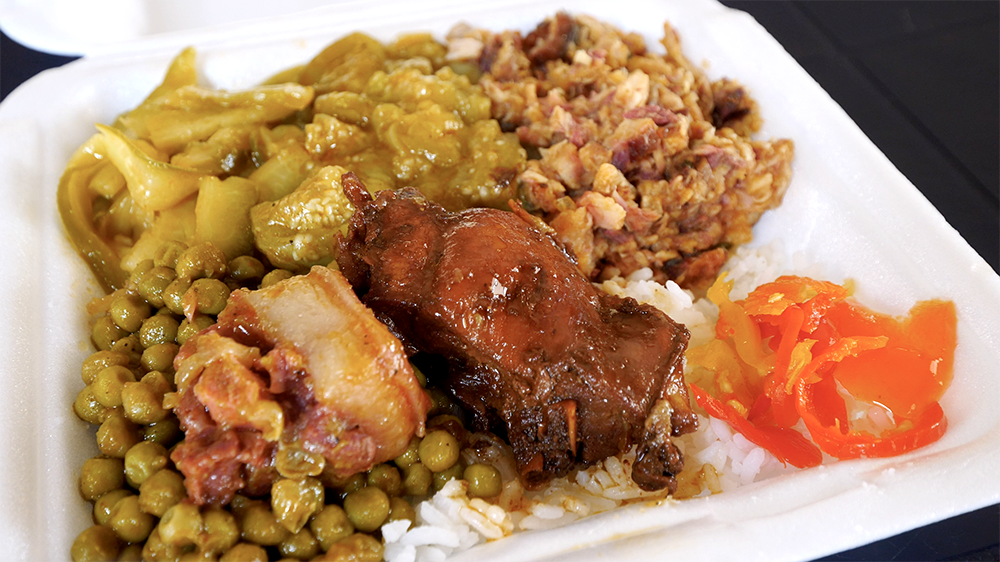 The smoked catfish was mixed with several things, including onion. It was like a delicious, minced fish. I mixed some with the rice and peppers. The peppers made it really hot! The veg had a strong flavor. It had the feel of eggplant but the taste was way different!

The pork tail was super fatty and full of bones. With the peas and rice, it reminded me a dish I’d tried in Africa. The peas were phenomenal. The chicken had an almost Chinese-like flavor and had a sweet sauce on it. Then I mixed everything together. The catfish was the best thing I tried! 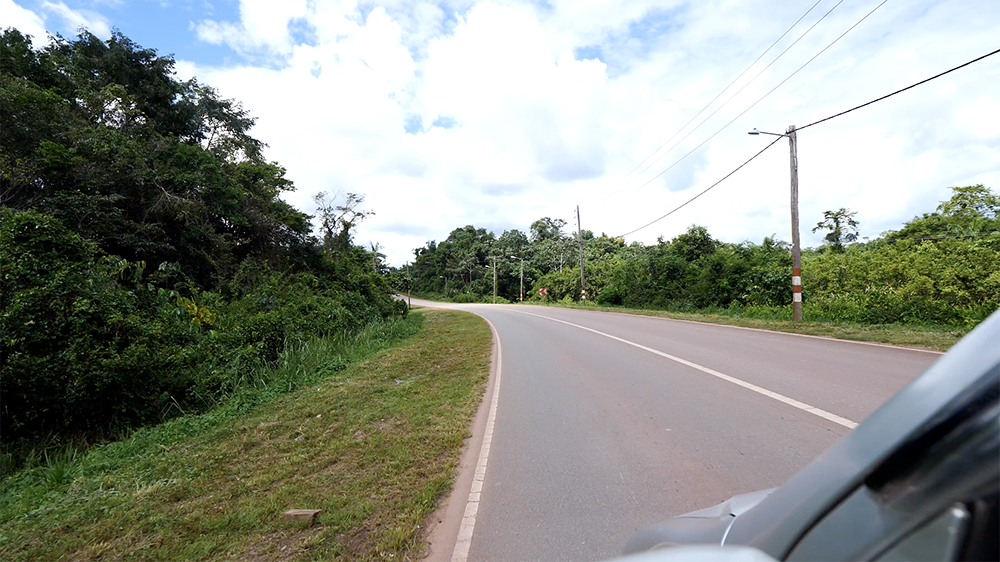 After my super authentic meal, we hit the road toward Paramaribo. I was excited to more of what this country is all about! After 90 minutes on the road, we stopped for some bananas. Mine was very sweet! 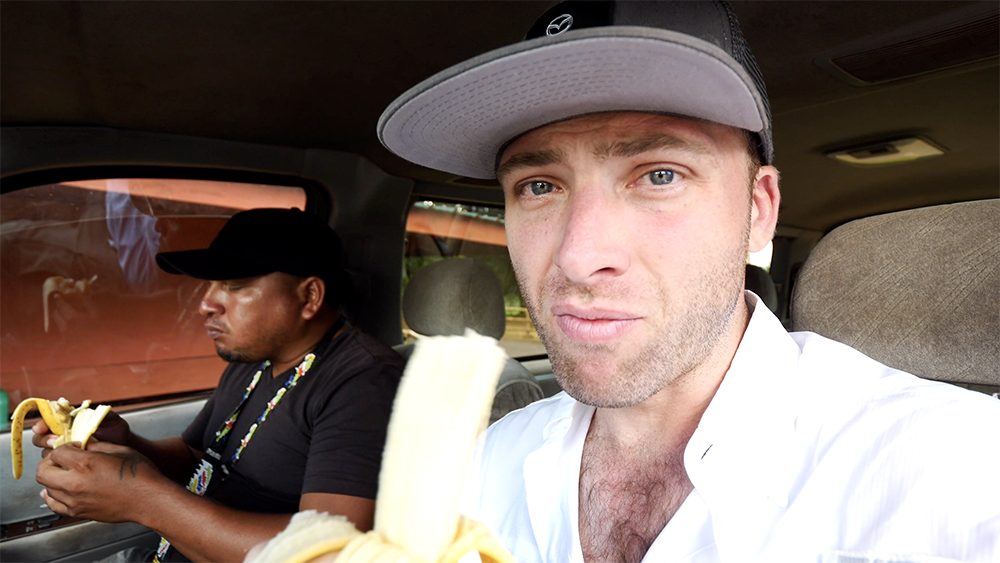 We passed back through Tamarejo, the Javanese town I’d visited the previous day. Just passing through reminded me of the amazing meal I’d had there and made me want to eat again! 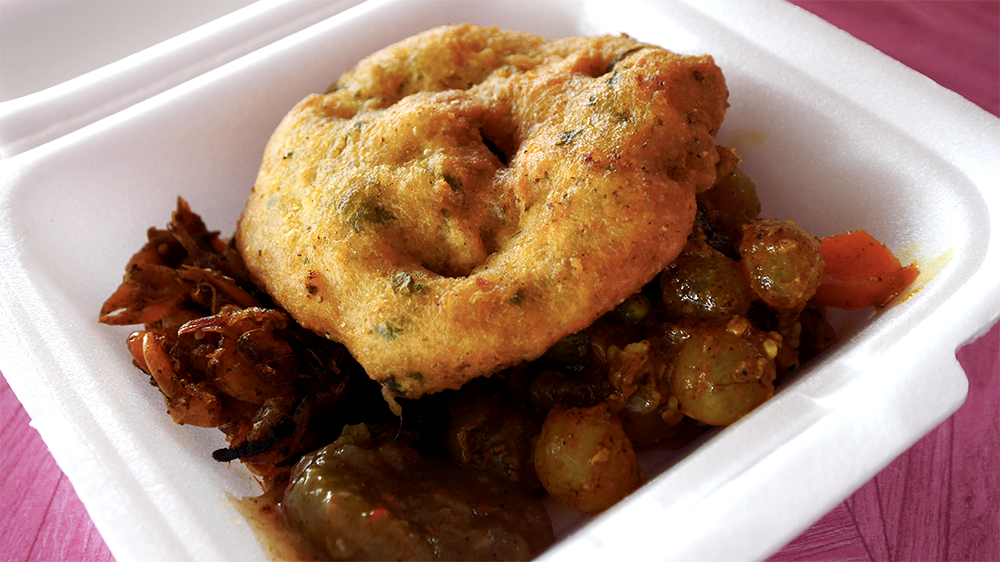 Outside of Paramaribo, we stopped at a roti shop where they served Indian street food in Suriname like vada and three chutneys: catfish roe, shrimp, and a spicy one! 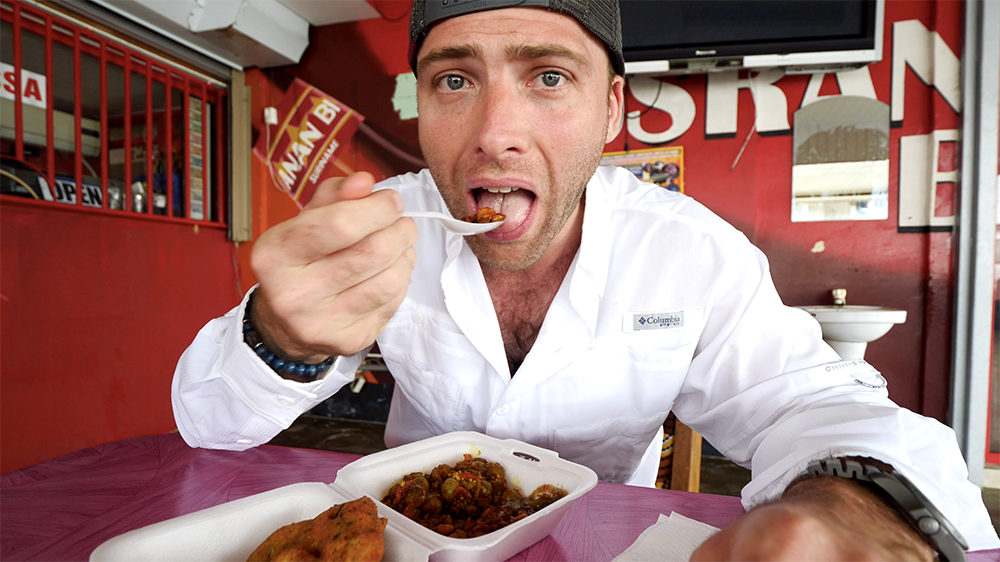 The shrimp was incredible and took me right back to India! I also loved the catfish roe, which was spicy and buttery. The crunchy, spicy, and oily shrimp was out of this world, but the catfish roe was one of the best chutneys of all-time! There were lots of herbs in there and the roe pops in your mouth! 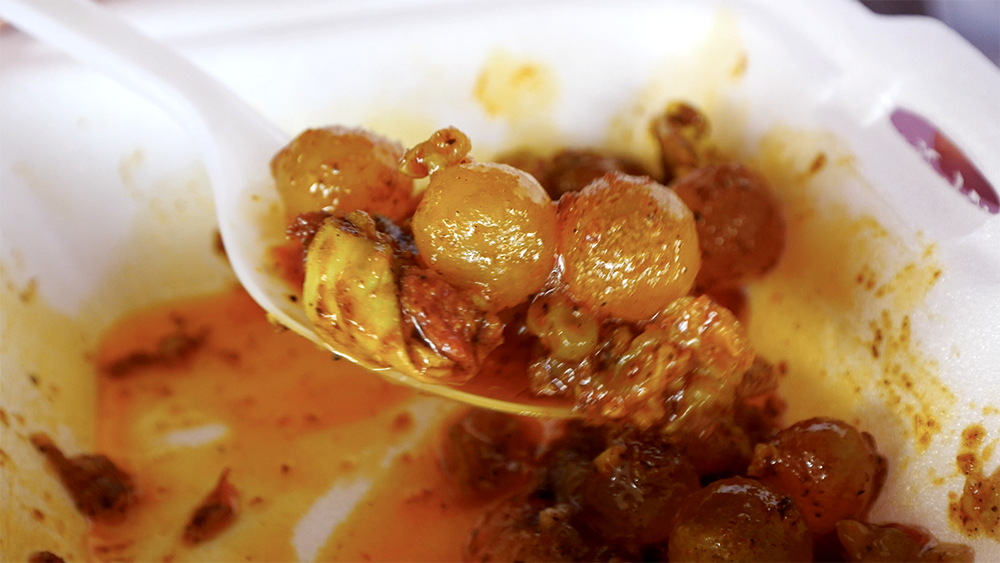 The vada was made of flour and went so well with the roe. Unreal! I loved it so much. The combination was so amazing that I had to get more of the roe! I couldn’t get enough of this Indian street food in Suriname!

Check out 10 Indian Street Food Dishes You Must Try in Jaipur, India

Then we headed out to get some sausages. There were lots of varieties, but I got some chicken sausage, beef sausage, blood sausage with bread inside, and an exotic-looking piece of beef that I couldn’t identify. 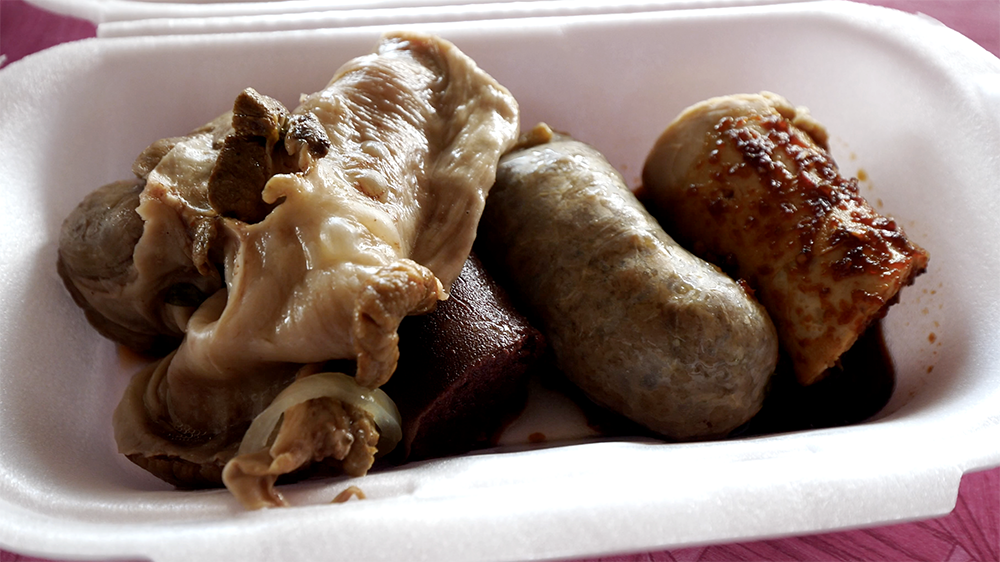 The blood sausage was better than any I’d ever had. The chicken had a spicy and sweet soy sauce on it. I was loving the spicy and sweet combos here in Suriname! The beef sausage was another winner! It was so fresh and was like minced beef inside. You can just suck it out of the wrapper! 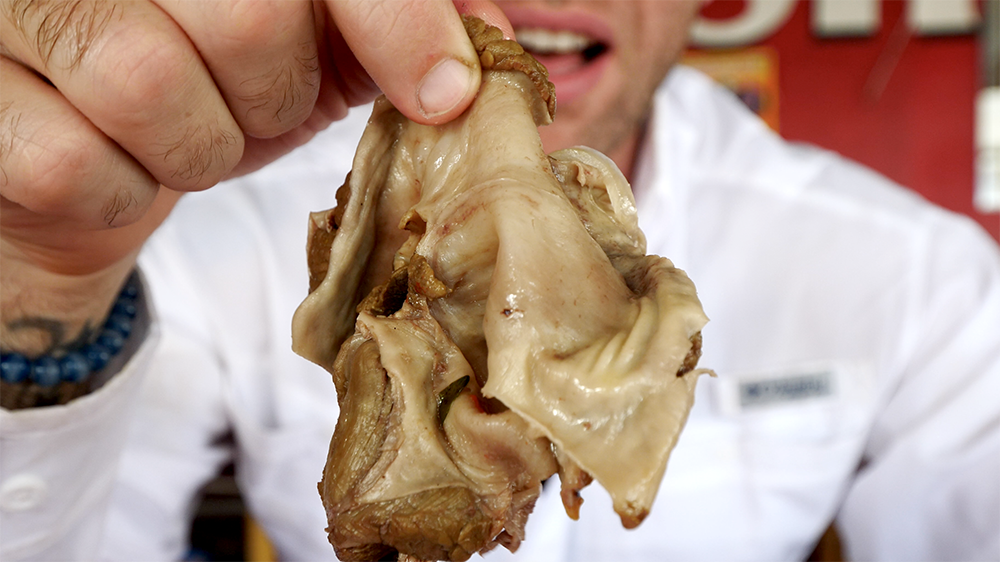 The exotic beef wasn’t bad. I was iffy on it because of the amount of fat on it, but it was really tasty! It was especially great with the sauce! 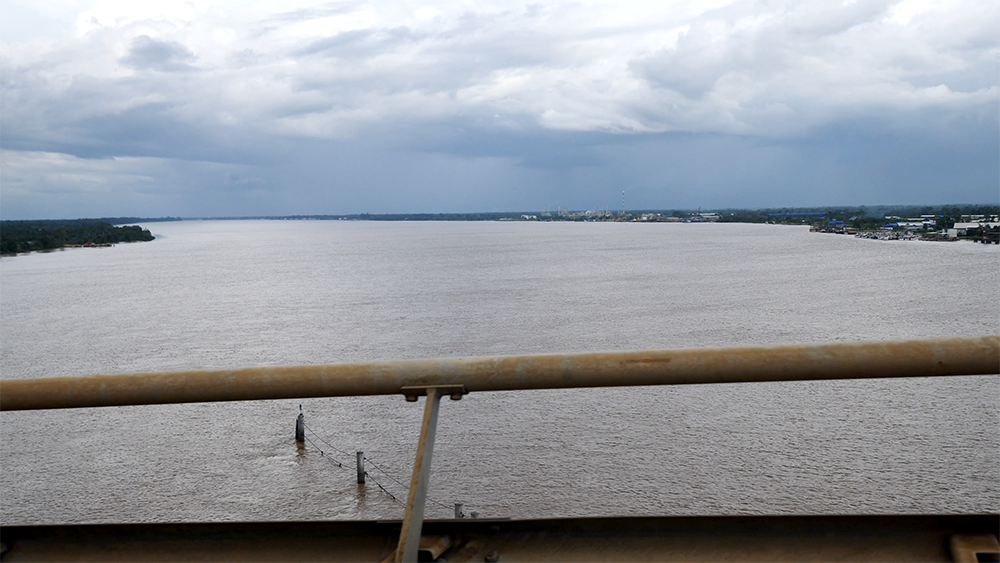 We crossed the bridge back into Pamaribo and made a left and followed the road. We passed a mosque and a Hindu temple, which shows how diverse Suriname is.

The road was being paved, so some of it was tricky to navigate! But then we got to the highway. Even though we were in a rainstorm, the area was beautiful! There was lots of jungle. The trees were higher and greener. 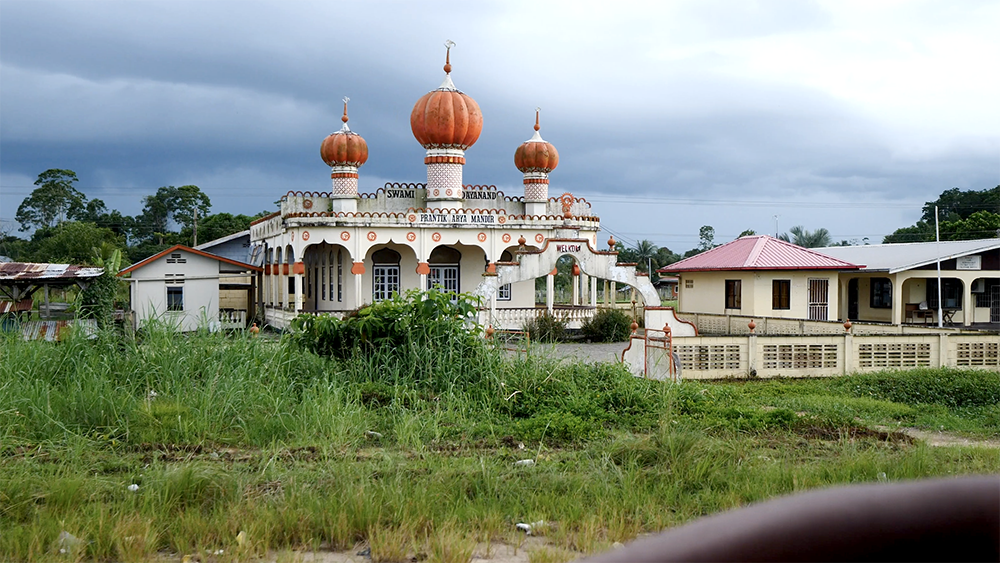 As we rode, we came across a wild, three-fingered sloth crossing the road. We decided to move him away from the road and put him near a tree to keep him safe from harm. 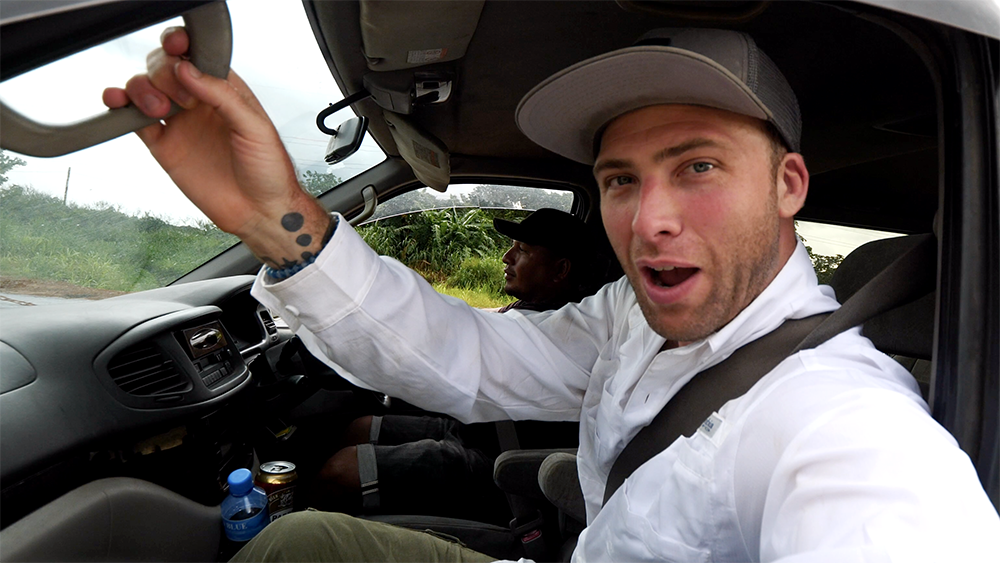 After about 3.5 or 4 hours, we arrived in the resort area. There was a huge, man-made lake, which was created in 1964. The area used to be a forest, so there are lots of trees rising out of the water! 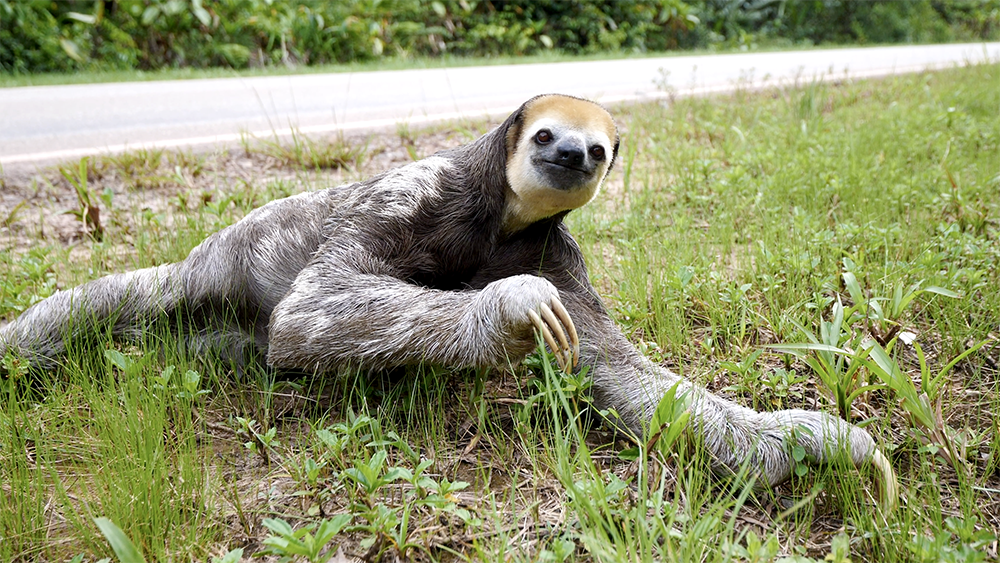 I hope you enjoyed coming with me on my road trip from Albina to Browns-Mountain! If you did, please give this video a thumbs up, leave a comment, and subscribe so you don’t miss any of my upcoming travel/food adventures!