As you guys probably already know, when I’m at home in Miami between trips, I like to showcase the best food South Florida has to offer. I especially love to show you guys the Indian food here! Come along with me as I try the biggest dosa in Florida in the town of Sunrise! 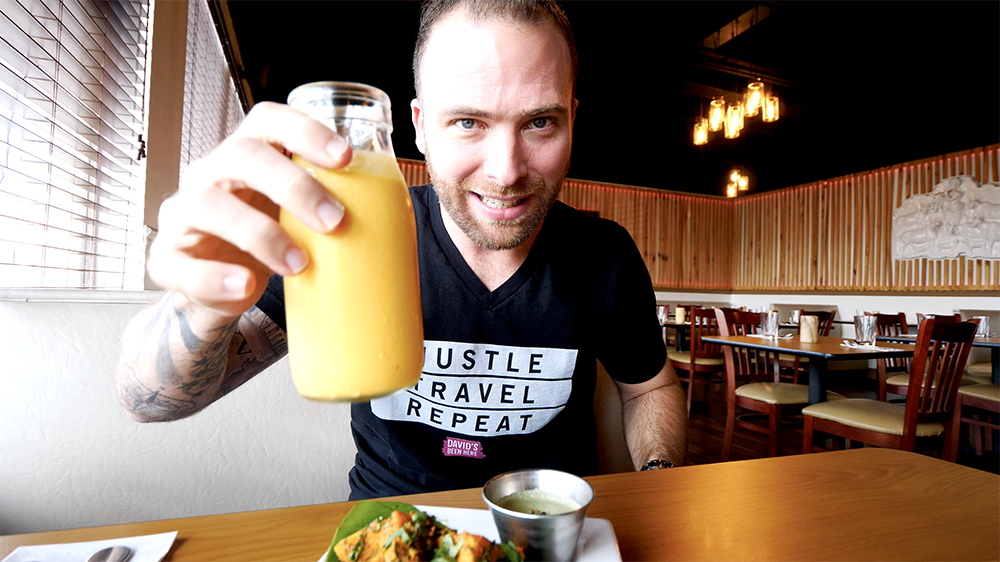 I drove one hour from Miami to Rasa Dosa and Indo-Chinese in Sunrise, Florida to try the biggest dosa in Florida. This restaurant focuses on southern Indian food and, obviously, Indo-Chinese cuisine as well. They have about a dozen dosas on the menu and a daily buffet for lunch! They also have an a la carte dinner selection and northern Indian food as well. I couldn’t wait to eat! 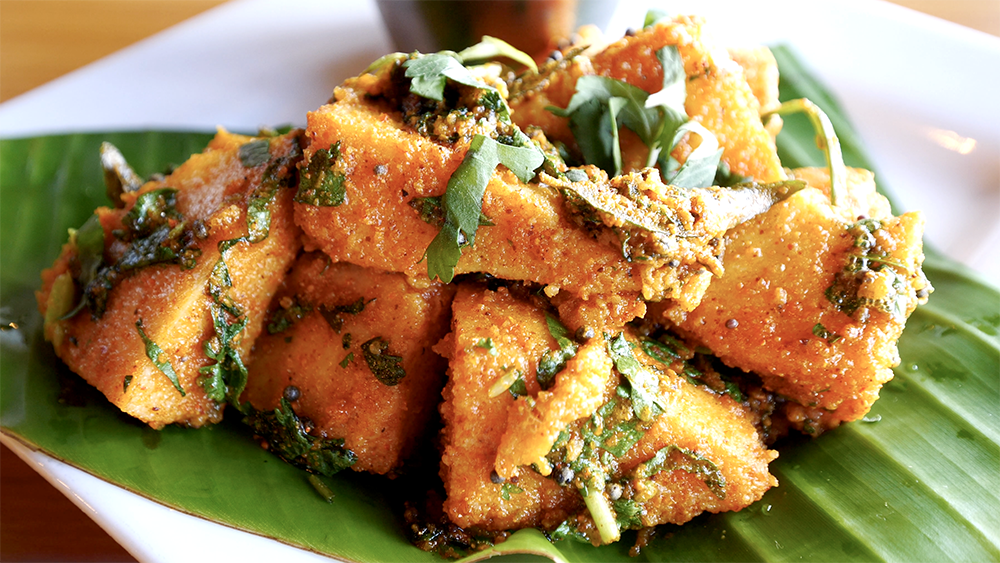 I started with a mango lassi, which tasted like pure mango and less like a lassi. Then, I tried a southern Indian idli with ghee. It had a spongy consistency and was super spicy! It took me right back to India and was so good! I’d never had a spicy idli! It was my favorite idli ever!

Next up was an Indo-Chinese dish, shrimp Szechwan. They were fried and had some Szechwan sauce, green and red peppers, and chilies on them. It was spicy right off the bat, but not too hot. I loved the sauce! I couldn’t get enough of it! 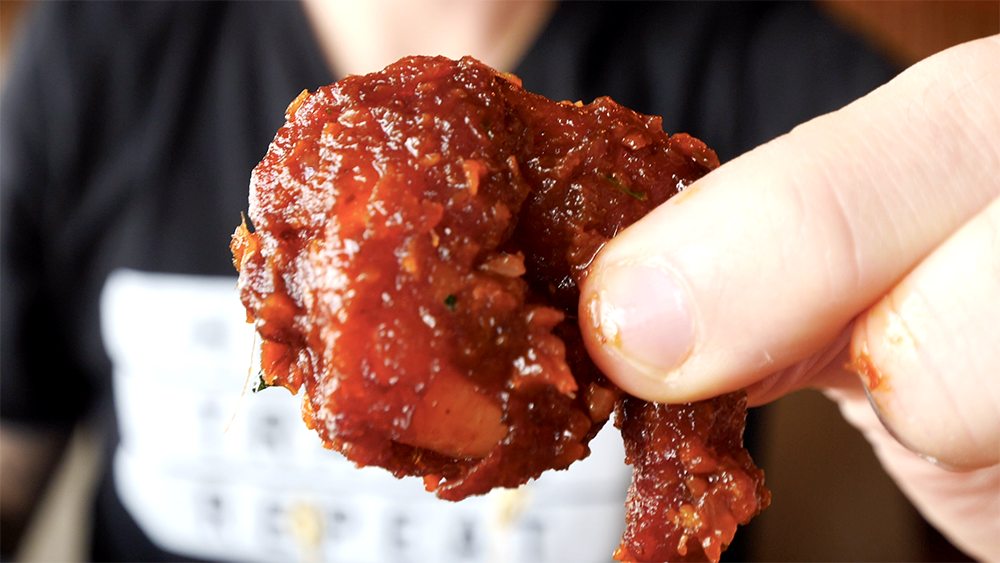 Then, I had puri bhaji, which is two puris with aloo. The aloo contains curry leaves and red chilies. It wasn’t too spicy. I loved the puri so much! The next appetizer was Mysore bonda, which is two potato fritters with tubes of coconut chutney and tomato chutney, and sambar at the bottom of the jar. 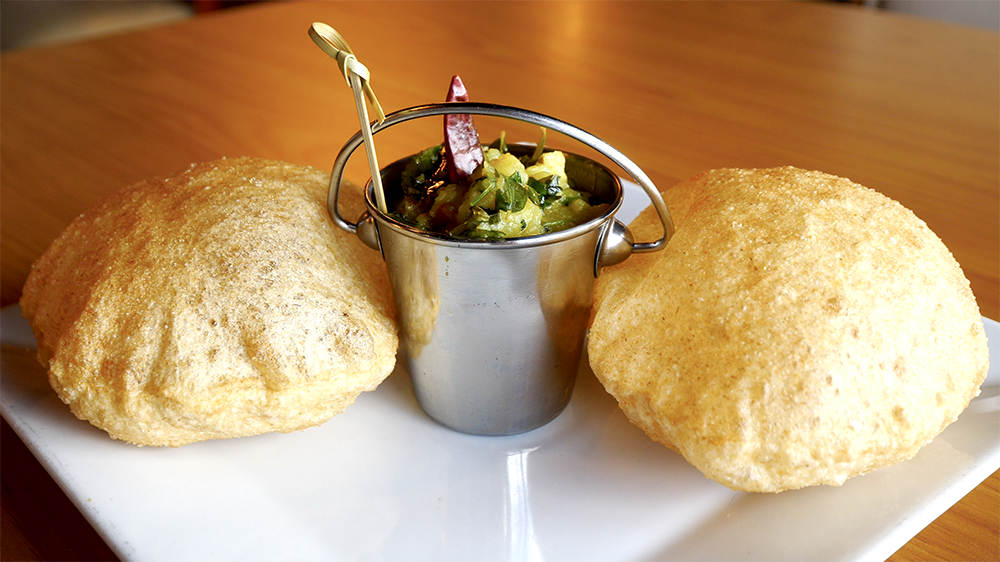 I poured the chutneys in the jar with the fritters and ate it with a spoon. I could see coconut leaves and mustard seeds in the mixture as well. There were so many different flavors! The sambar was more like a tomato gazpacho. It was really mild, soft, and tasty! 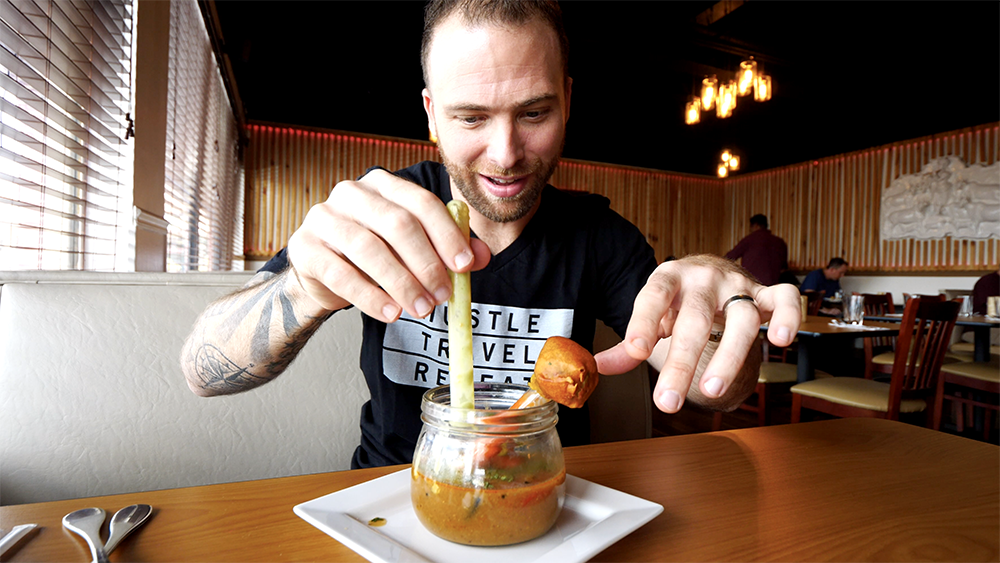 Then, I went back to the kitchen to watch them make the biggest dosa in Florida! It’s a 3-foot-long paper dosa. It costs $12 USD and is an absolute monster. It’s meant for at least two people! It’s served with tomato chutney, coconut chutney, and sambar. 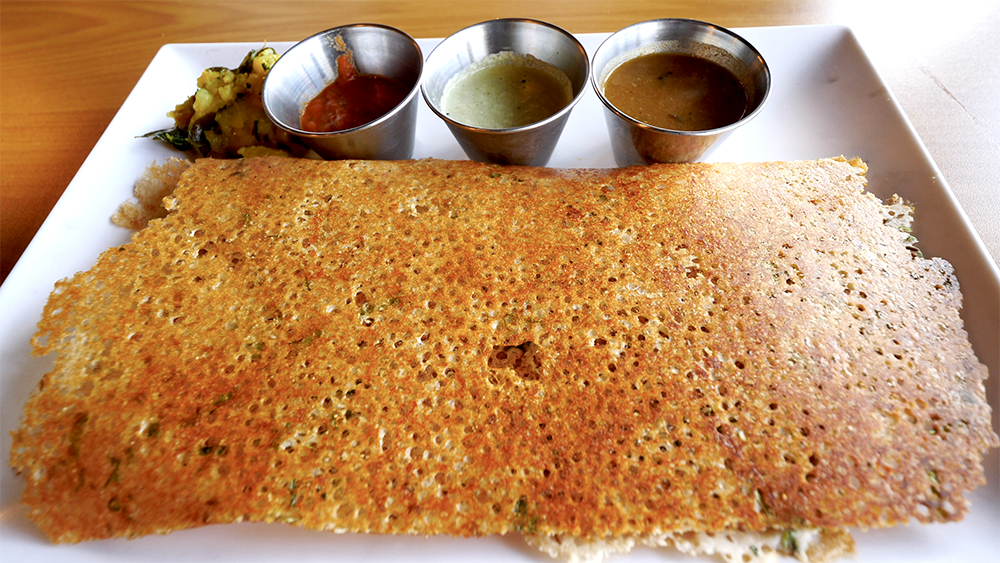 It was similar to the last dosa but had a bit more dough in it. The ghee gave it extra flavor. It was amazing with the coconut chutney! I realized pretty quickly that I should have eaten this dosa without the 4 appetizers before it! I still had another dosa to try after it! 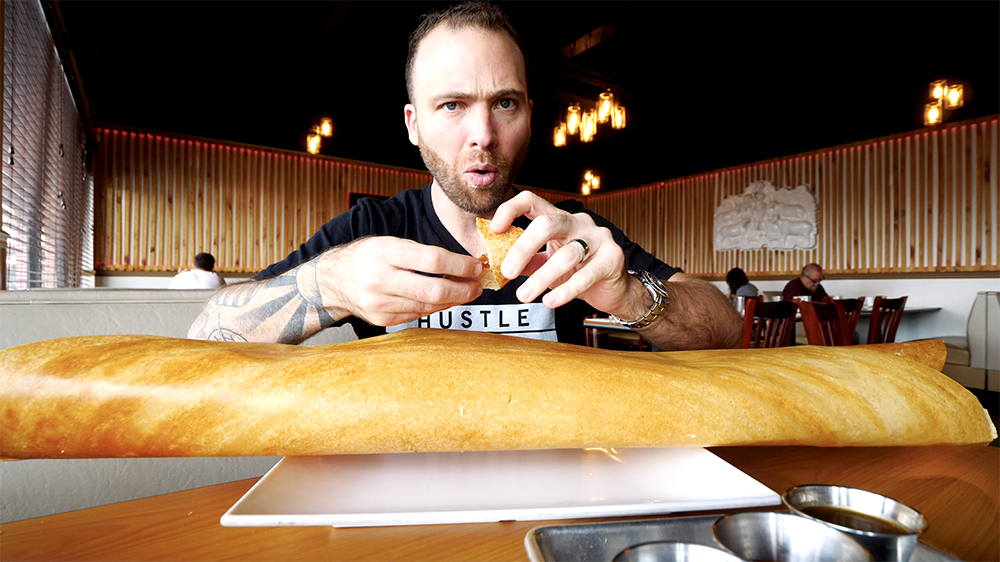 The potatoes inside the sambar were amazing. The sambar itself was really light! You should start at the ends when you eat a dosa like this. The ends are super crispy like a chip! 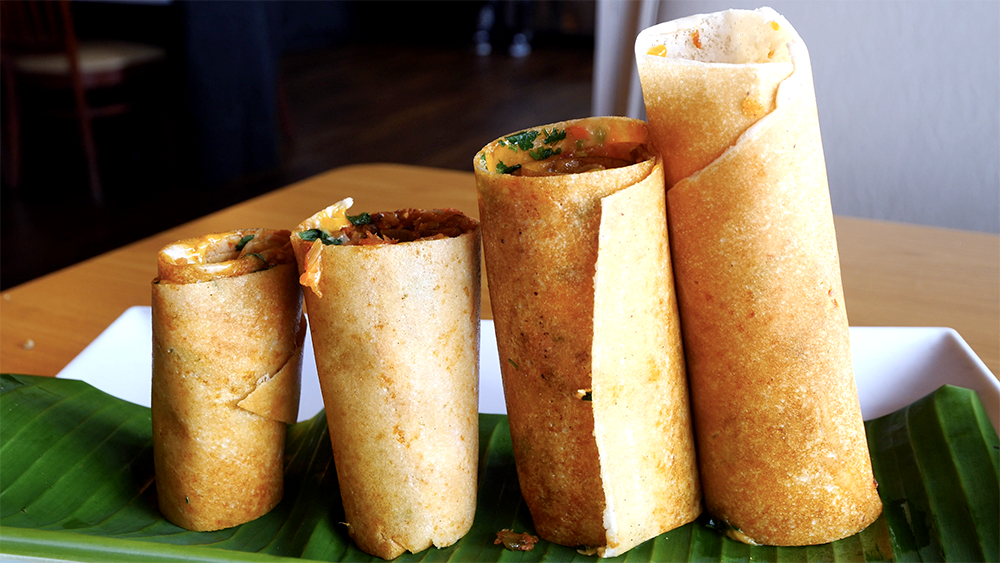 Next up was the house dosa, the jini dosa! It’s one big dosa cut into four rolled-up pieces. They have cheese, vegetables, and house sauce inside. The diced vegetables and the melted cheese were unreal. This dosa was doughy instead of crispy, but it was so amazing! 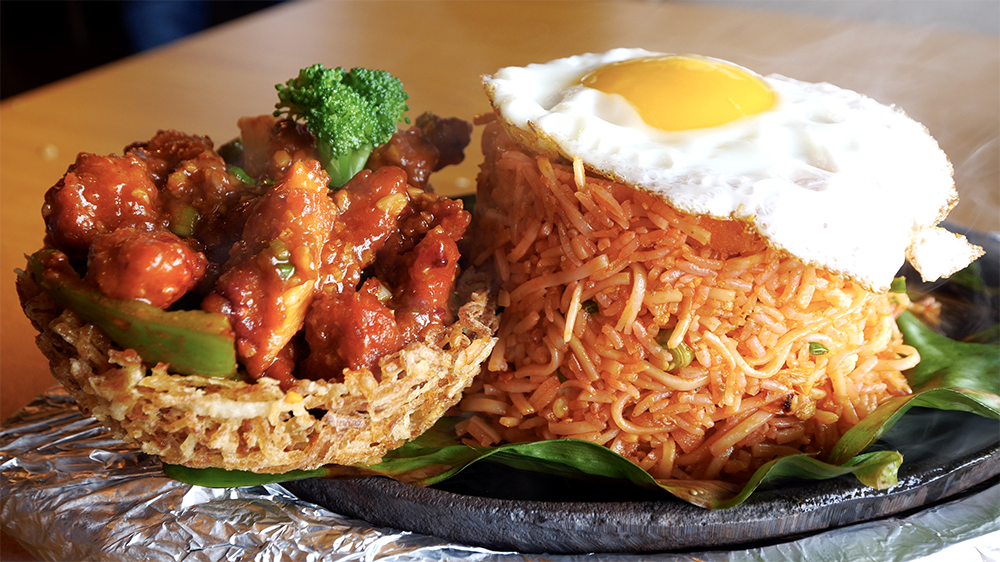 Then, I tried a Szechwan dish with chicken, crispy noodles, rice, and more noodles with an egg on top. It was still sizzling! I broke the yolk on the egg and let it run throughout. I’d never see anything like it! I loved the sauce. It was a little spicy and sweet, almost like a sweet and sour sauce. The yolk running through was amazing. The heat caught up with me, so I had to have more lassi!

Then I bit right into the fried noodle basket with the chicken. It had the best elements of Indian and Chinese food and had some nice spice to it! 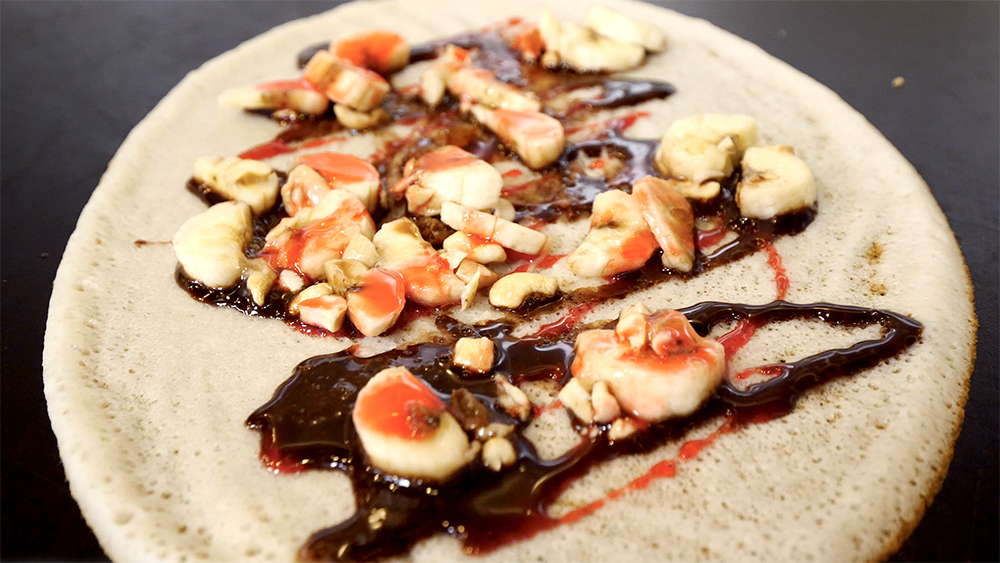 Then, for dessert, I had a chocolate-banana-nut dosa. It was Southern India in a bite! The dosa was doughy, so it absorbed the flavors better. It was my first dessert dosa ever and I loved it! The mix of chocolate, mushy bananas, and nuts was unreal! 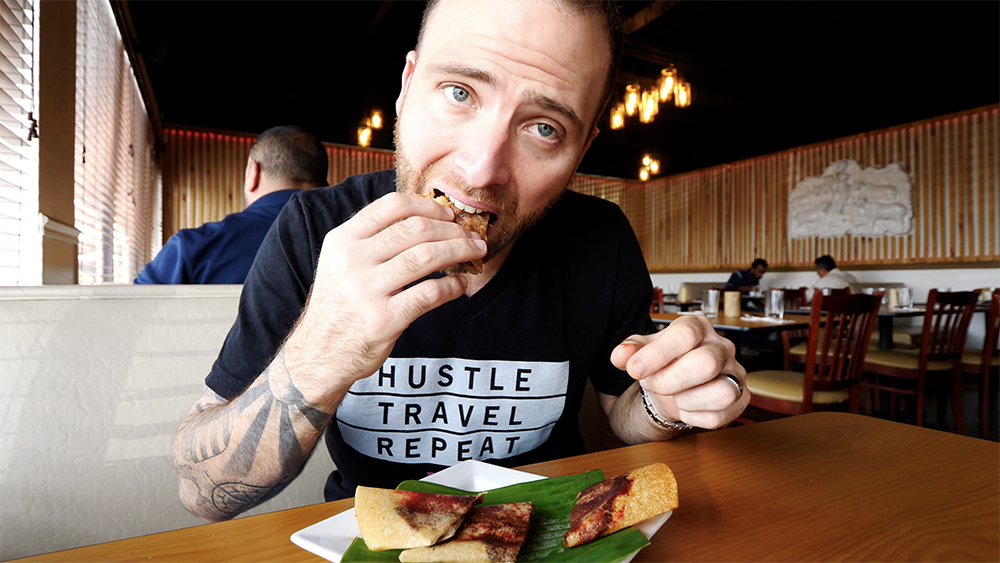 I hope you enjoyed coming with me to try the biggest dosa in Florida! If you did, please give this video a thumbs up and leave a comment below. Also, please subscribe to my YouTube channel and click the notification bell so you don’t miss any of my upcoming travel/food adventures!